Joining us for his very first RUN we welcome in artist bachor, who joins us with Bombpop, featuring a wide variety of his signature repurposing of potholes that has shown up throughout the Midwest. Read on as bachor gives us the story behind these pieces featured in his debut RUN, influences and much more. . . 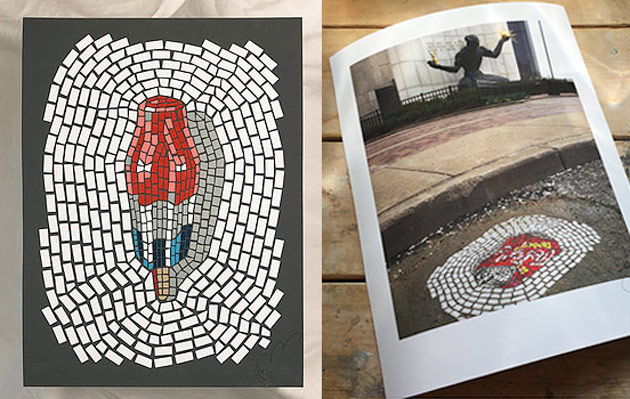 1xRUN: Tell us a little bit about this piece, anything immediate you would like us to highlight about this image?
bachor: ”Bomb Pop” is easily my most popular piece. I think it takes everyone right back to being a kid chasing down the ice cream truck in the summer. It also screams “America!” being red, white and blue and the fact it looks like a rocket (and IS called a bomb.)

1x: Was this image part of a recent theme, series or show that you had? If so how did it fit into that given grouping?
bachor: Yes, what I’ve tried to do with some of my pothole art series is juxtapose “universal truths.” Everyone hates potholes. It doesn’t matter if you’re rich or poor, young or old, suburban or city, everyone hates them. I like to contrast that with something that pretty much everyone loves, like ice cream or flowers.

1x: What materials were used to create this original piece?
bachor: The original is made up of marble and smalti, a type of glass from Italy.

1x: When was it originally drawn/created? If it was part of a larger continue series when was that begun?
bachor: “Bomb Pop” was installed in April of 2015 just west of downtown Chicago. I think it lasted about 2 years before the street was repaved. It was part of my “Treats in Streets” series that featured classic ice cream treats.

1x: Tell us how the idea and execution came about for this image? How long did this image take to create from start to finish?
bachor: It really was just a matter of brainstorming all the old ice cream novelties I hoped to be able to afford when the ice cream truck came rolling down the street. The “Treats in Streets” series consisted of 10 different items like creamsicles and push-ups. These pieces take around 8-10 hours to do in the studio. Installation in a pothole takes another 4 hours or so.

1x: What is unique about this piece compared with your other work?
bachor: This is the first ever letterpress treatment of one of my works.

1x: Why should people buy this one of these prints?
bachor: Not only is this the first ever letterpress treatment I’ve done, it’s also made up of 7 colors. From what I understand that is a crazy amount of colors to attempt using the letterpress process. It was produced in a very limited edition of 30 pieces by highly regarded Aardvark Letterpress (Los Angeles).

1x: When did you first start making art?  What was your first piece?
bachor: I guess it was in high school. However when I was really young I thought I had invented color comics in the Sunday newspaper. I would color the black and white ones that appeared in the weekday editions. When the Sunday paper showed up with already colored comics I thought someone had stole my idea! Boy, I can’t really remember. But I did start selling artwork when I was in high school.

1x: Do you listen to music while you work? If so what? If not then what is your environment like when you work?
bachor: All the time! I like some of the mixes on Spotify + Wilco, REM, Neko Case, XTC, Pearl Jam, Elliot Smith…

1x: If you could collaborate with any living artist who would it be and why? Any deceased artists?
bachor: Banksy. I just think his/her/their clever twists are killer. Something to aspire to… Hmmm…maybe a brilliant, nameless ancient mosaic artist that produced one of the masterpieces that survive to this day.

1x: What was the first piece of art that you bought? Do you still have it? The last?
bachor: Yes! A painting by Michael Kingsbury. I think he was a student at the School of the Art Institute in Chicago. It’s in our basement and far too big for our house. The subject matter might also be questionable for my 11 year-old twin boys. The last was a Vivian Meier print – I love it. Such a brilliant photographer with a sad background.

1x: Any big shows or events coming up that you’d like to share?
bachor: Yes! I’m currently working on two commissions, one for the city of Chicago and the other for a children’s hospital. Both very exciting but also very stressful. I also have tentative plans for a pothole campaign in New York City in Spring 2018 and in Rome in Spring 2019.