Opening Friday, March 10th at Inner State Gallery (See photos here), graffiti pioneer COPE2 unleashes a powerful new body of work titled Juggernaut. Once again the New York City-based graffiti legend will showcase his many styles that have grown to epitomize the early 1980’s subway graffiti era and continued to become one of the most coveted art forms in contemporary art here in Detroit. Joining COPE2 will be fellow New York City graffiti pioneers TAKI 183, T KID, VR FRESH, SKUF and OZBE, who will be showcasing new works for the curated group exhibition Action Shotz. Read on for a look into each show and see the full Juggernaut and Action Shotz exclusively right here on 1xRUN . . .

“I chose the name Juggernaut for this exhibition because I’ve been a huge, powerful force of nature in my world of graffiti street art since the early 1980’s. From the ghetto streets of the Bronx and all throughout New York City, through the five boroughs and into the subway graffiti era and now around the world with paintings in galleries, museums, art auctions and private collections worldwide,” Cope2 said from his New York studio.

This career-spanning exhibition will showcase works new and old from Cope2’s nearly 40-year career in the graffiti world. Featuring styles that have become infamous Cope2 will include wild style letters, graffiti hand styles, fine art mixed media canvases and of course Cope2’s signature bubble letters which have been imitated the world over. 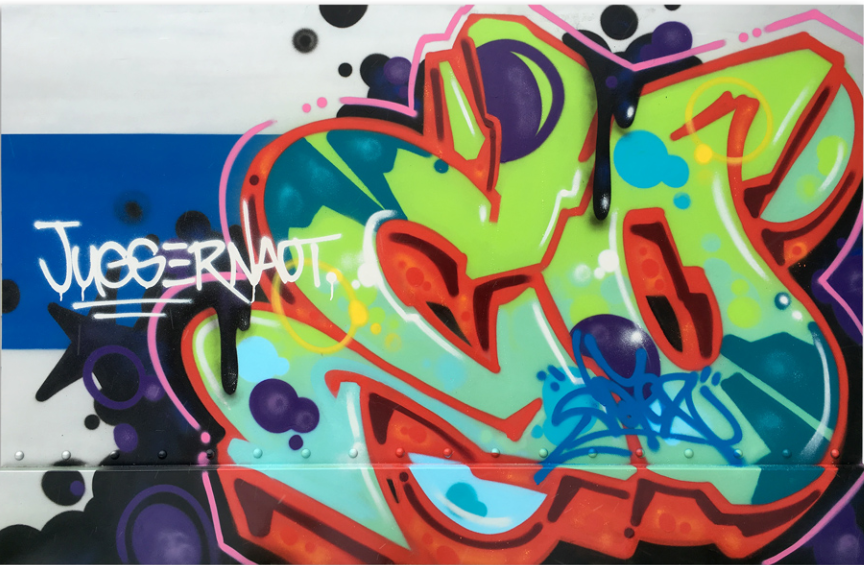 Joining COPE2 will be fellow New York City graffiti pioneers TAKI 183, T KID, VR FRESH, SKUF and OZBE, who will be showcasing new works for the curated group exhibition Action Shotz.  The exhibition features photography and mixed media works from some of New York City’s most influential underground graffiti writers, Action Shotz invites the world into the creative process with a mix of tattered subway paraphernalia, aerosol cans, markers and tools of the trade that convey the longevity of New York City’s counterculture art community.

“The goal of this exhibition is to show that no matter what generation an artist identifies with, the goal is always to be creative, influential and fresh, proving that New York graffiti in its purest form is timeless,” curator Jee Carlo aka Kingz Destroy said from his studio space in New York.

Returning for his second exhibition with Inner State Gallery, Cope2 comes back to Detroit to work with the 1xRUN team after his massively successful sold out exhibition Versatile back in 2014.

“We’re excited to welcome Cope2 back to Detroit and work alongside him in our studio to create a series of originals, unique high-end prints and multiples that will fill the gallery with the sights and sounds of New York’s underground subway culture.” Inner State Gallery co-founder
Dan Armand said from the gallery’s Eastern Market studio space.

With over 40 new mixed media paintings, unique multiples and limited edition prints this is an exhibition that promises to be one for the record books yet again.