A few weeks ago the inaugural KAABOO Del Mar festival took a major, and perhaps accidental, plunge into the contemporary art scene. What seemed to be just another music festival — typically featuring live art off in a remote, secluded corner — proved that it’s taking visual art a bit more seriously. Thanks to Art Director and featured artist, San Francisco-based Amandalynn, the ‘adult escape,’ which is geared towards an older and more sophisticated crowd, featured a bold (and very massive) array of fine art, street art, and sculptural movements from some fine players in the new contemporary art movement. An impressive variety of renowned contemporary artists, galleries, and organizations showed up to support the inaugural festival, traveling to the Del Mar Racetrack and Fairgrounds in California from around the globe – all to share in the debut of this new ‘mixperience.’ The festival’s art component, dubbed the ‘ArtworK’ Experience,’ included eye-catching fine art design on entryways, structures, and KAABOO’s seven stages (which, by the way, hosted over 100 bands including headliners No Doubt, The Killers, 311, Snoop Dogg, The Roots, and Zac Brown Band). In addition, ten thirty-foot-tall custom, hand-painted canvas murals by 1xRun alumni Aaron Glasson, Brendan Monroe, Celeste Byers, Hueman, Kamea Hadar, and Tatiana Suarez towered over crowds, commanding attention throughout the fairgrounds. Other 1xRun alumni Risk, Apex, Lucien Shapiro, David Young V, and Erik Otto also showcased live art, installations, and sculptures.

Art Director Amandalynn’s intention is clear — she hopes KAABOO ArtworK will become a force in the contemporary art festival scene, showcasing art as a dominant element of the entire KAABOO ‘mixperience’ unlike any other music festival in the world. We caught up with her to discuss her path in creating this expansive artistic vision and how she was able to successfully execute it in the first go-round. She also shares what she has in store for 2016’s ArtworK Experience and her vision to create an unprecedented artistic explosion in the festival realm and prove that visual stimulation is an undeniable necessity in creating a truly encompassing experience. Read on for an in-depth interview with Amandalynn and to learn more about this new breed of festival. 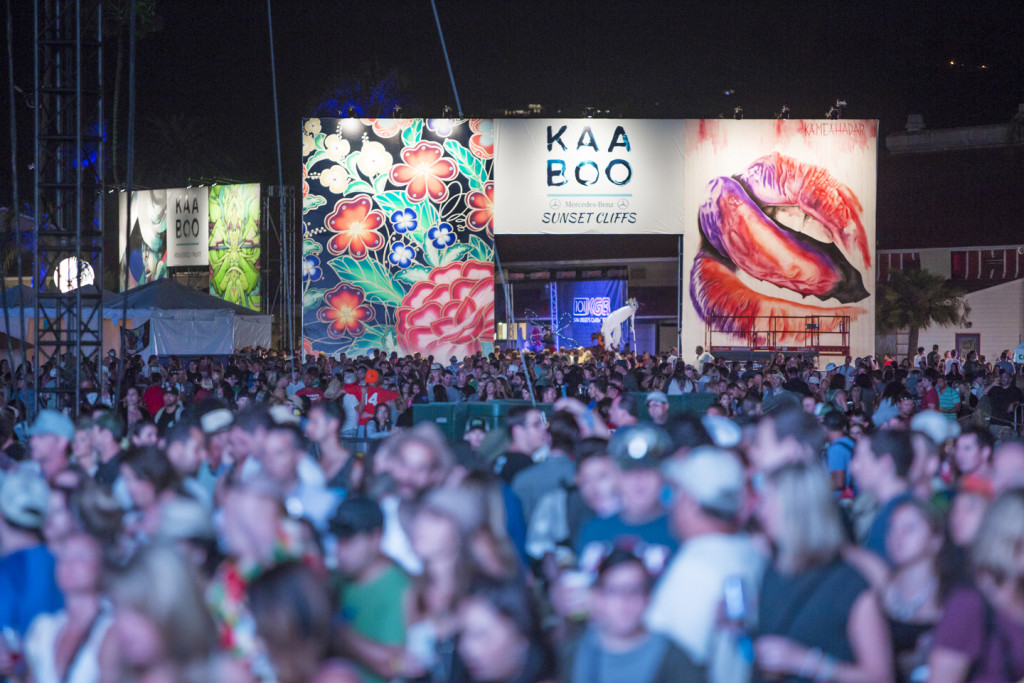 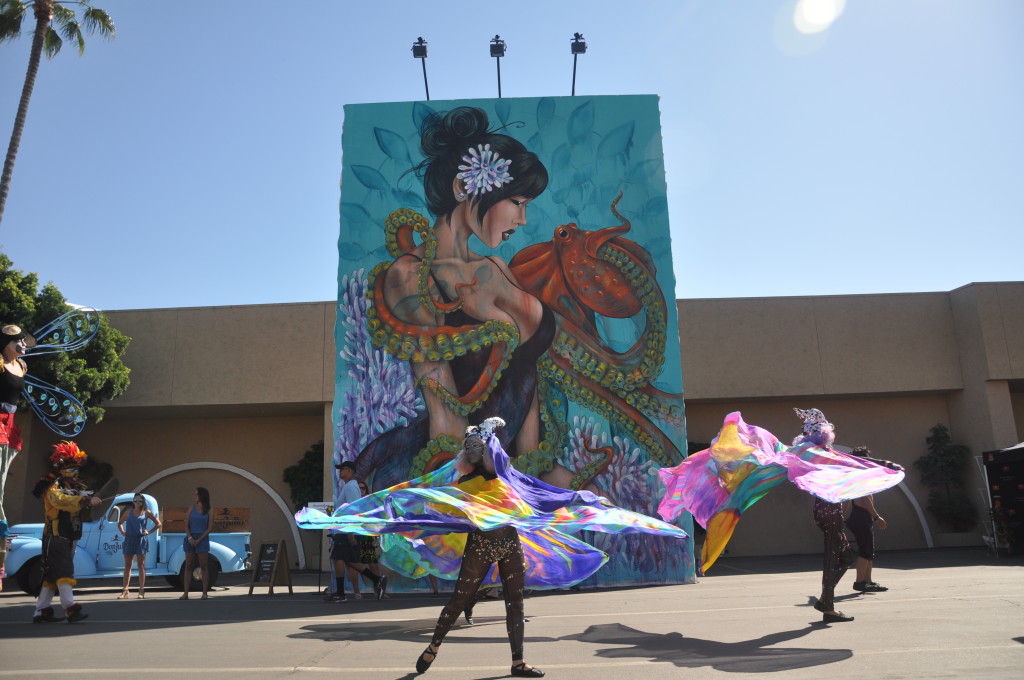 1xRUN: Congrats to you on the success of KAABOO ArtworK – amazing job! How long have you been involved in this project and how did the position as Art Director come about?
Amandalynn: Thank you! I started officially working for KAABOO last February 2015. I met the owner / producer of KAABOO, Bryan Gordon, a couple months earlier. He hired me to paint a large scale canvas mural for KAABOO’s main headquarters in Denver. He asked for a pretty intense deadline – I finished the day before, rolled up the mural, and jumped on a plane with huge 12-foot tube. We got the canvas installed just in time and Bryan invited me out for a drink. When I showed up at the bar to meet him, there was a huge site plan of Del Mar Racetrack, and he said ‘I was wondering if you were interested in participating and possibly helping in this big project I’m working on’….I had no idea what I was getting in to! 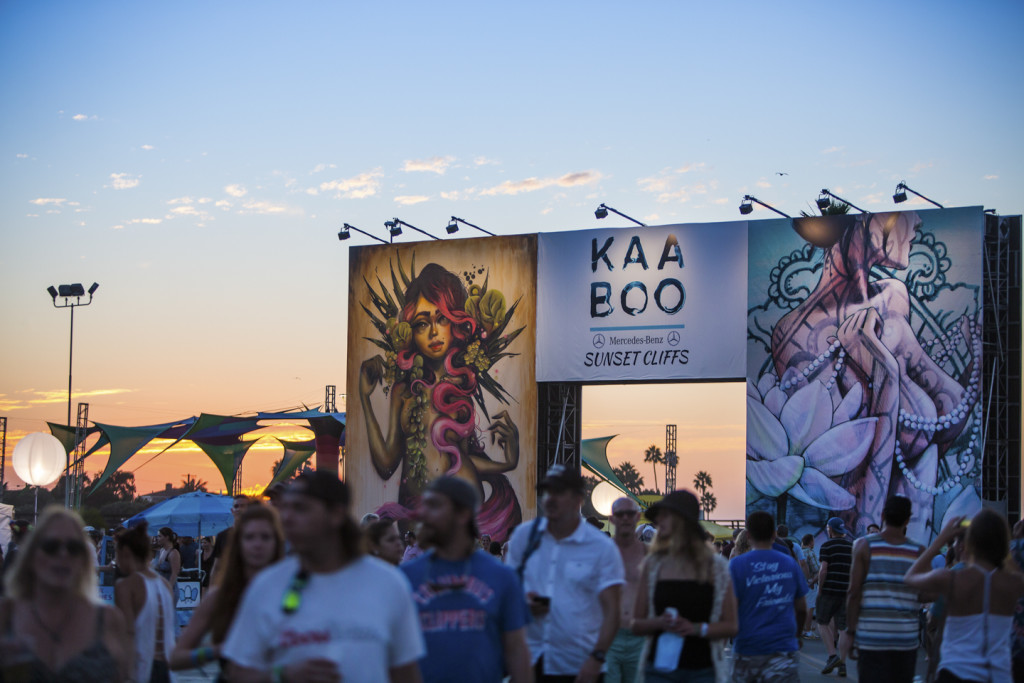 1x: You never know what some connections or projects will lead to. Can you give us a little insight into how you ended up on this path as an artist?
Amandalynn: I’ve been an artist my whole life, and was really fortunate to study under the prolific painter Robin Grass throughout my childhood and teenage years. For some reason, I’ve always had a dream of moving to San Francisco. After visiting once and seeing murals everywhere, I knew I belonged there. I moved there six months later on January 1, 2000.

1x: It’s interesting that some artists just swear by their loyalty to that city. Was there a pivotal moment in your career that you knew being an artist was your calling?
Amandalynn: Ironically, the most pivotal moment showing me that I have made the right decision to pursue this crazy art career was the opening night at KAABOO!! Watching Gwen Stefani hang off the side of the stage, next to a 70-foot-tall replica of my artwork was pretty epic!! The past 15 years of my life have been pure dedication to painting fine art and murals, as well as curating exhibitions and helping friends express their artistic visions. KAABOO Artwork is an example of what I have been working towards all along. 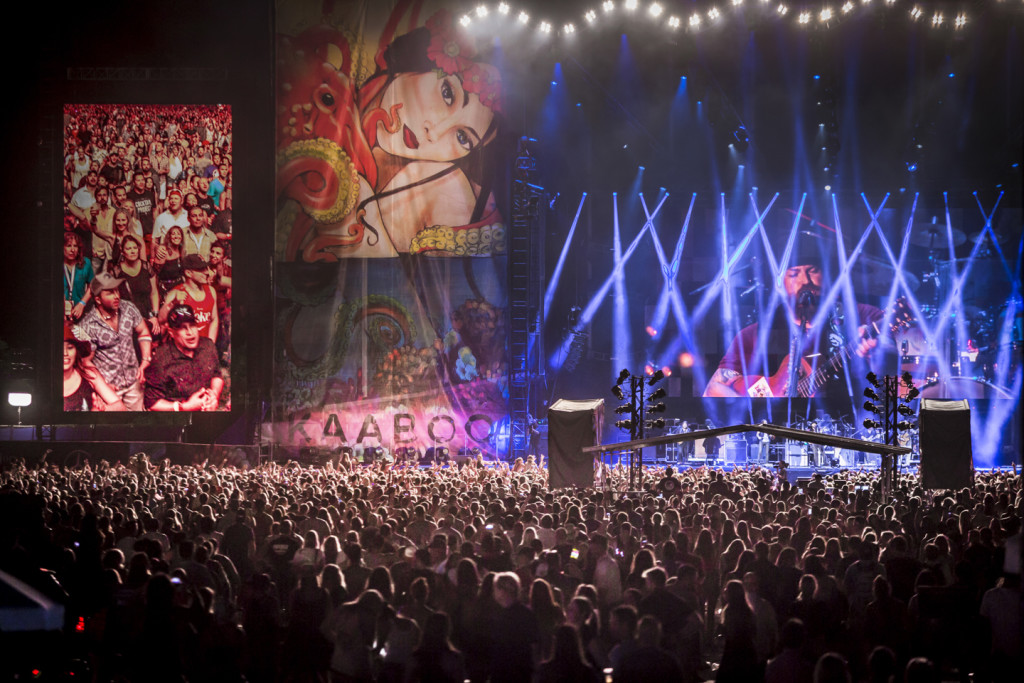 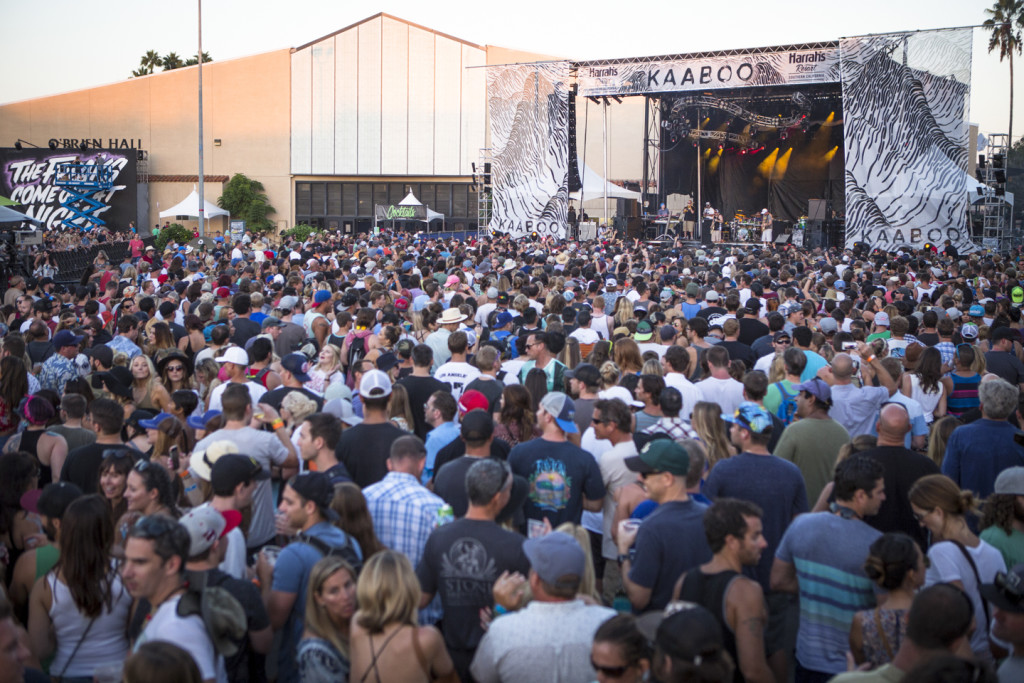 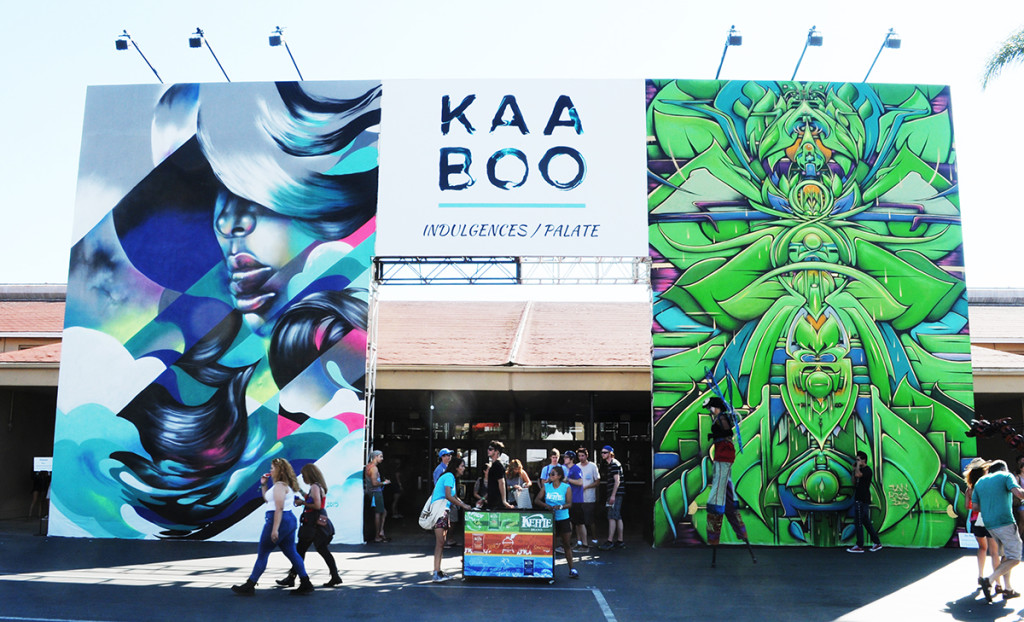 Murals by Hueman and Ian Ross

1x: THAT IS EPIC!! We agree, the level of artwork showcased looked pretty insane with all of the stage pieces and huge murals towering everywhere. Is this what sets KAABOO apart from other music and art festivals? What was it like to be a featured artist in addition to being the Art Director?
Amandalynn: I would say the first thing that comes to mind when I think about what sets KAABOO apart from other music festivals that have an art element, is the attention to detail. When teaming up with the design team Joe Styles and Marian Morioka, in addition to Bryan, there was a true, dedicated approach to artistic curation. All of us strove to visually communicate a cohesive message, elevating the art side of things to a level that it should be showcased at.

Participating as one of the featured artists was basically the icing on the cake. I have never been respected so much as an artist. Obviously, I busted my ass to make everything work for other artists but when it came to my time, my team stepped up for me and it was quite flattering and enjoyable! 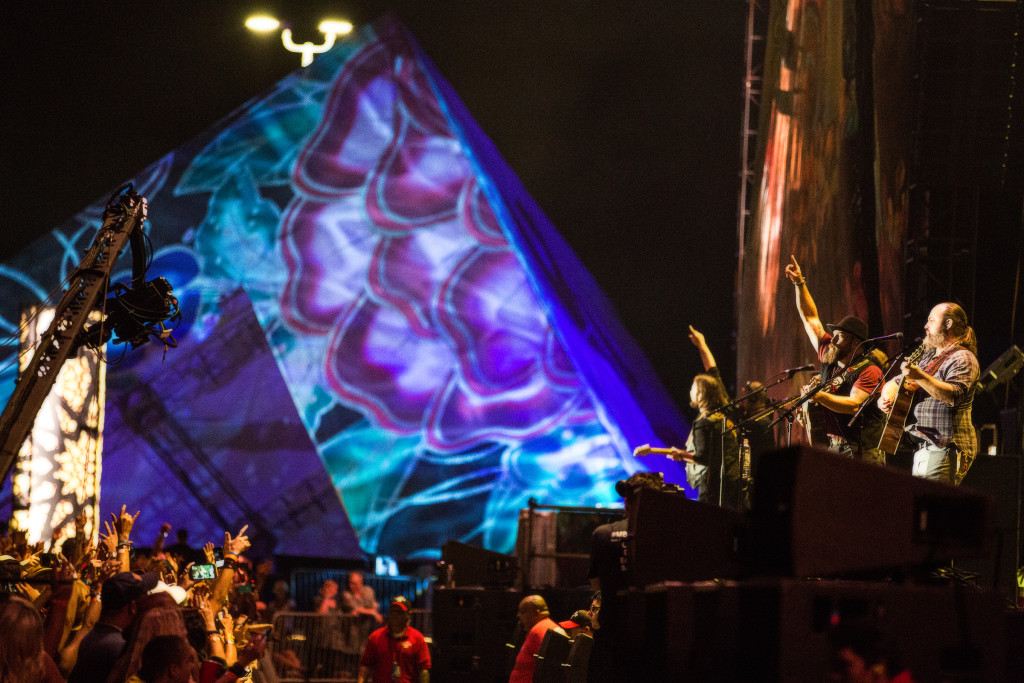 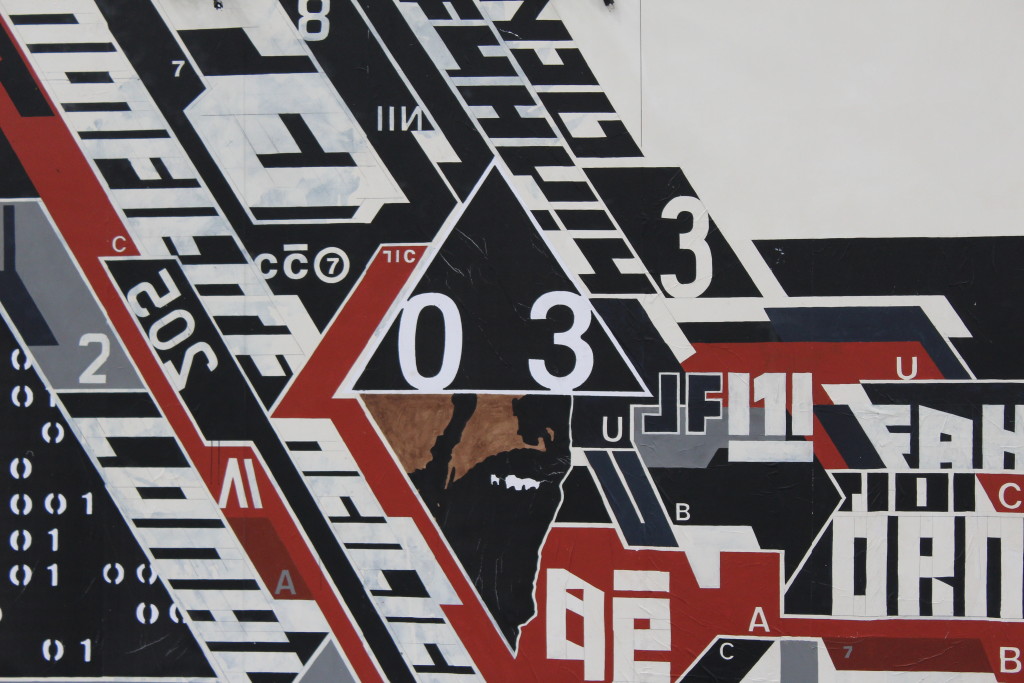 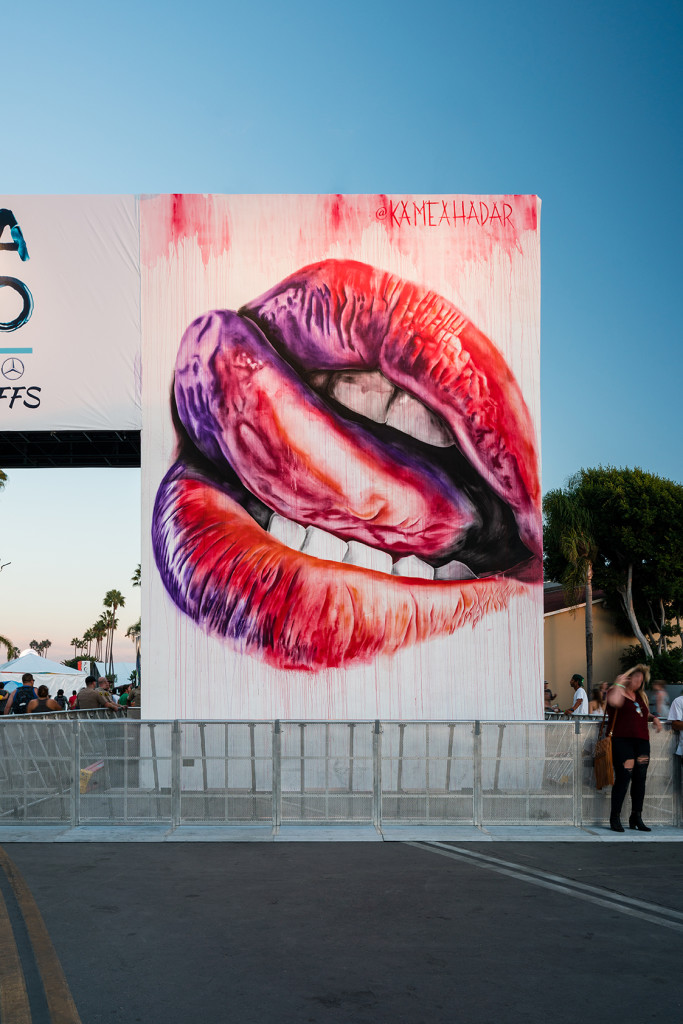 Mural by Kamea Hadar
1x: We think it’s pretty obvious that you had the support of an amazing team, who believed in your artistic vision. In addition to how rad the team was, can you tell us how you chose this lineup of visual artists for the inaugural festival?
Amandalynn: The group of artists I chose were people that I have either admired and/or worked with for a long time. The owner only had two requirements; no weapons and no graffiti. As much as I respect all art and messages, I understood where he was coming from. It also gave me a chance to really highlight ‘mural’ artists – which is what I consider myself. I love graffiti and was raised by graffiti artists within my art career, however, I have a true love for muralists. It’s an art form that has maintained throughout time, but maybe hasn’t always gotten the recognition that it deserves. Mainly, the group of artists that I chose to work with are dedicated people that have been honing their craft for a long time. I really want to strive to highlight passionate people that believe in themselves and the message they are creating for the world around them. 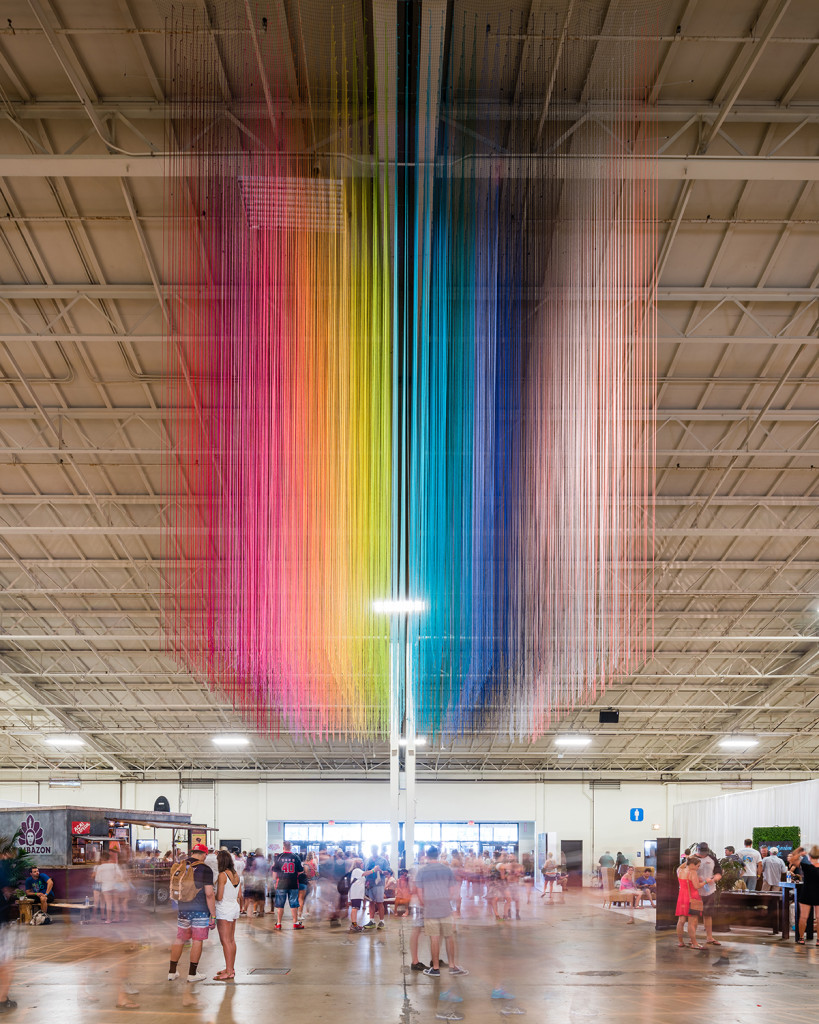 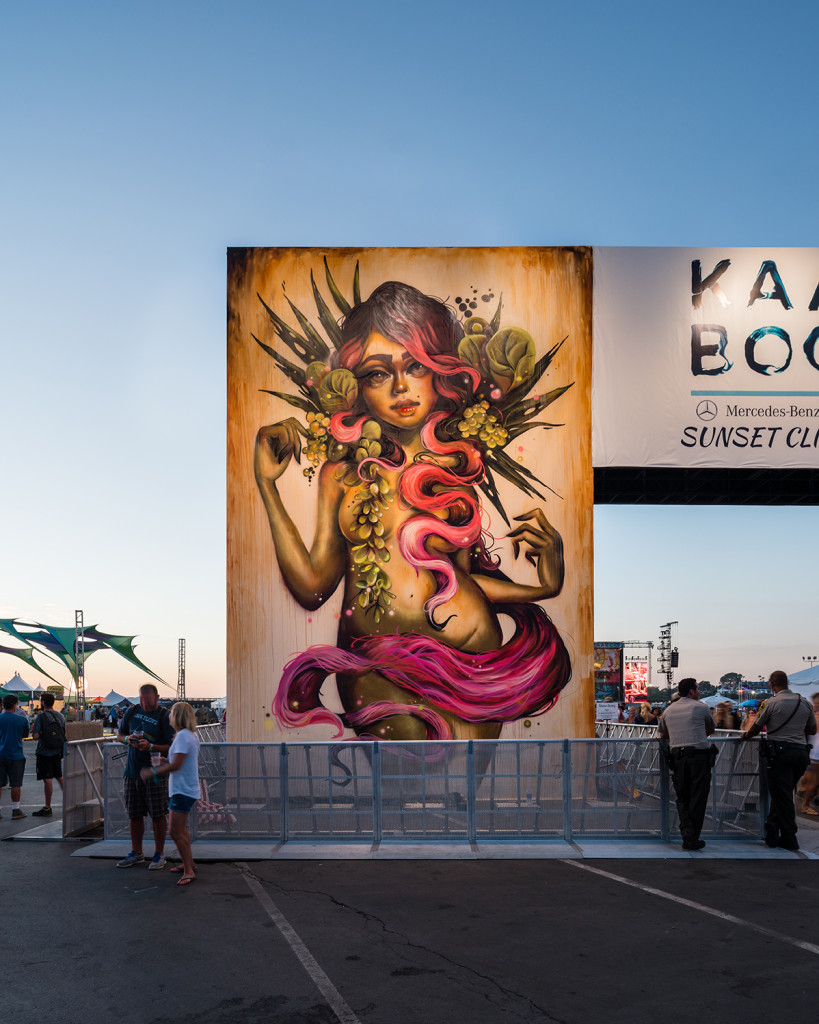 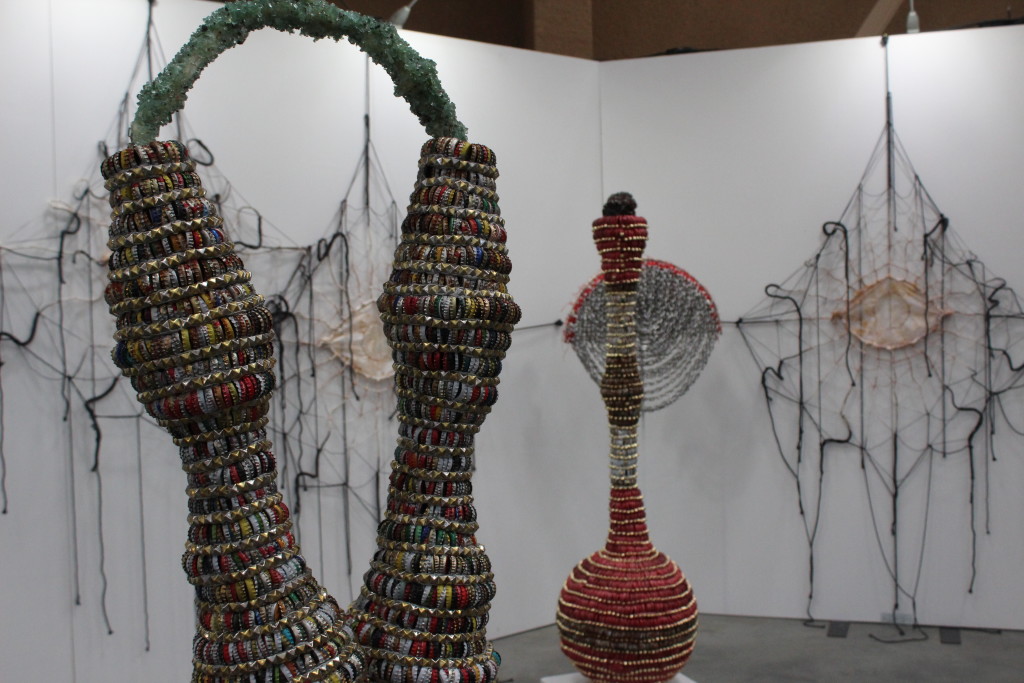 1x: That strategy seems to be working well in general – it’s easier to work with people you’re comfortable with. Despite this, did you feel that the event was successful in achieving your vision as Art Director?
Amandalynn: Yes, the event was better than I could have ever expected. I have done a lot of curating in the past, and usually something always goes wrong, or artists are unhappy, or someone doesn’t come through the way you thought they would – and that just didn’t happen at KAABOO. All the artists were completely amazing to work with and I am very pleased to have made several new lasting connections. The galleries were so professional and all the exhibitions were beautiful.

Everyone sold art, and so many compliments were thrown around about KAABOO ArtworK. Basically I always expect the worst – and more than the best was produced! 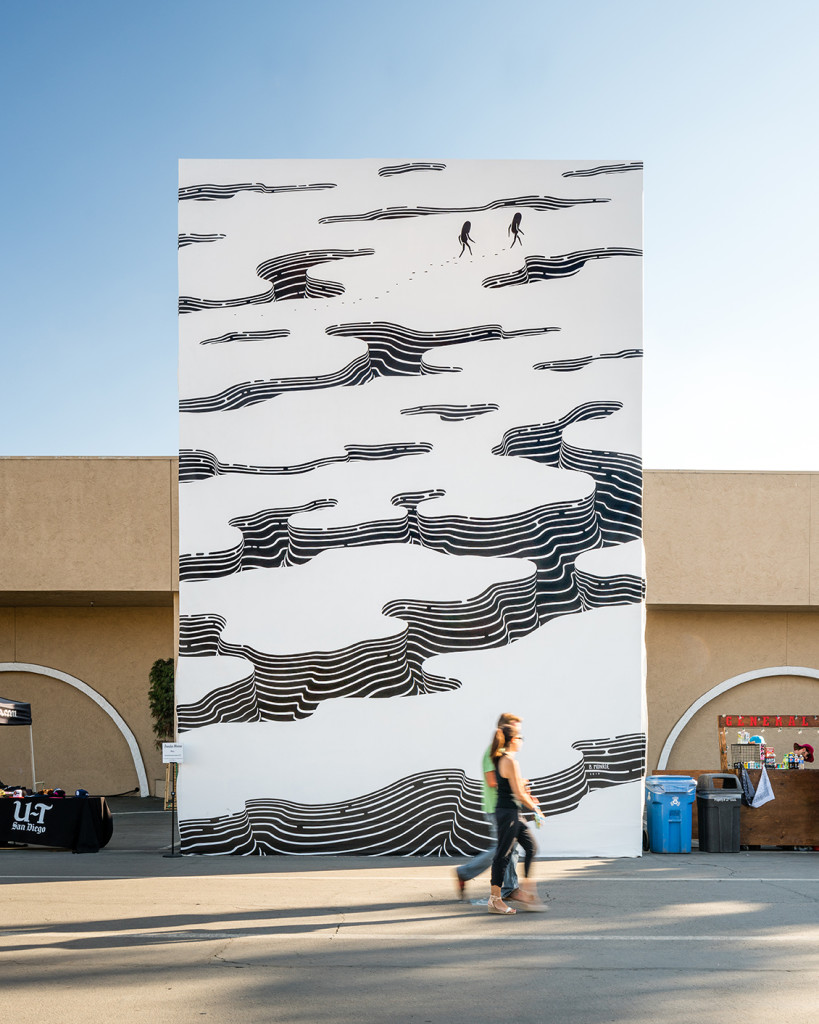 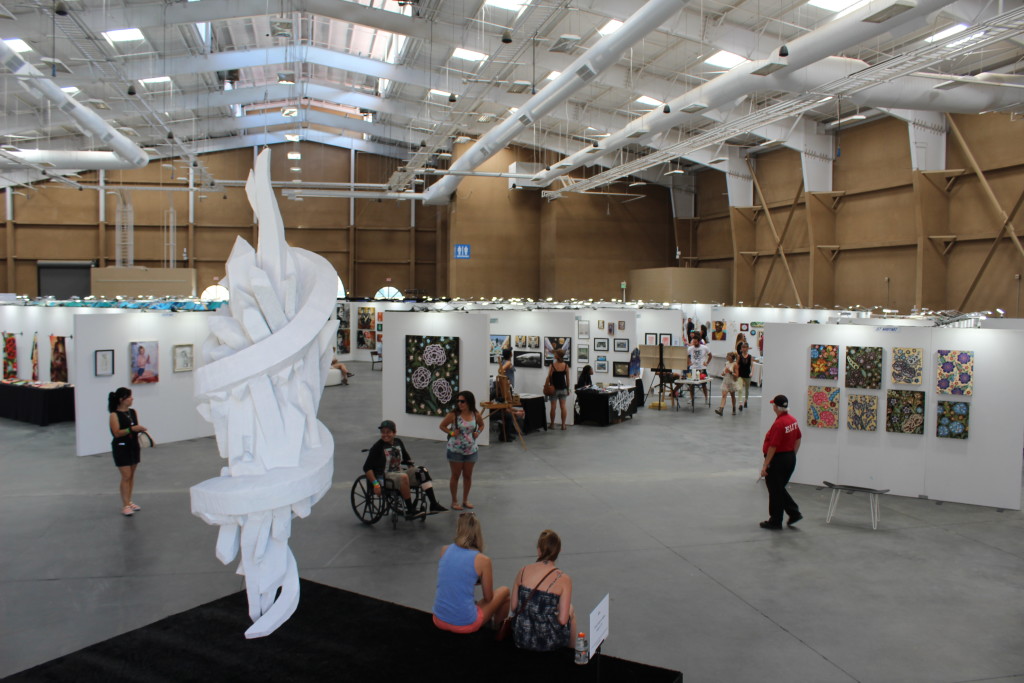 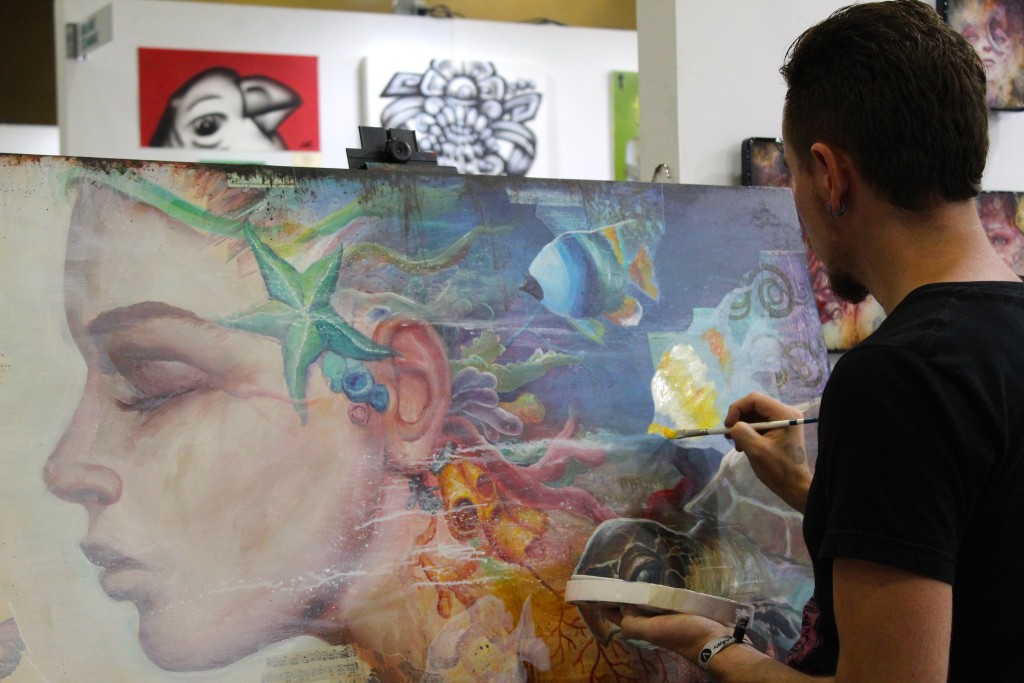 Live Painting by N.C. Winters
1xRUN: It’s awesome when it works out that way, and it definitely came through with the prominent level of featured artwork. Well… what’s next on the agenda and what do you envision for KAABOO ArtworK in 2016?
Amandalynn: Well…my mind is exploding with possibilities of what is next. My true hope is that we elevate KAABOO Artwork to be as much of a draw as the music element is for attendees. I really think the sky is the limit, especially with such a passionate design team: Joe Styles, Marian Morioka, and Amandalynn – newly coined ‘Mor-Style-Lynn’, and the incredible vision and support of Bryan Gordon, owner and producer. And definitely not to be missed – Ariel Gordon, the Artwork Gallery Director, who showed her true passion and dedication to pushing this event into the realms of a serious Art Fair and Exhibition. Basically – I can’t wait to see what’s next.
For more, check out Amandalynn and KAABOO ArtworK on Instagram.
-1xRUN
Amandalynn was interviewed by 1xRun Contributing Writer Miya Tsukazaki. She has previously interviewed Hannah Stouffer and reviewed the groundbreaking Vitality and Verve exhibition at the Long Beach Museum of Art. Follow her  @MiyaEuca
Photos provided by Brandon Shigeta @bshigeta, Micah Wright@wrightontheroad, and Enriqueta Arias @enriquetaarias.
0000
BY: Dan Armand