It’s damn near impossible to turn your head in Miami and not see a vibrant orange or the signature lettering of Atomik heading through Miami. In his words Atomik is a 100 percent Miami artist and we couldn’t agree more. As part of the 1xRUN x Juxtapoz Clubhouse Print Suite Atomik brings us a beautifully hand-embellished screen print featuring his iconic orange character, Atomiko, which emerged as a response to the demolition of the Miami Orange Bowl. As was pretty apparent to any one walking the street during Miami Art Week, Atomik marks the walls of Miami (and damn near the whole country) with his sleek hand-styles, graffiti, and lettering. While painting for almost 20 years, Atomik’s playful characters and hand styles have become as much a symbol of Miami as are palm trees or neon lights and we are excited to welcome in this tireless hustler to the 1xRUN fold.  Read on to find out more about Atomiko and his signature character. . .

1x: Tell us a little bit about this piece, anything immediate you would like us to highlight about this image?
Atomik: I’ve done several screen prints with this design. This particular one is unique because it is full color, in the previous editions I only add shading and highlights.

1x: Was this piece part of a recent theme, series or show that you had? If so how did it fit into that given grouping?
Atomik: This piece is part of my ongoing Atomiko campaign, which represents my birthplace and home of Miami Florida.

1x: What materials were used to create the original as well as these prints?
Atomik: The original image was sketched on paper with ink then vectored in illustrator. The graphic was silk screened by hand on paper. Afterwards I added aerosol, graphite and ink. The edition was created in early 2016 and it is signed, dated, numbered and embossed.

1x: Tell us how the idea and execution came about for this image?
Atomik: My image is inspired from the Miami Orange Bowl logo used from 1980-2008. When the stadium began demolition in 2007 I started creating my own version of the orange.

1x: How long did this piece take to create from start to finish?
Atomik: Almost a year!

1x: What is unique about this image compared with your other work?
Atomik: This image is a smiling cartoon. Which is very different from my letter based graffiti art. 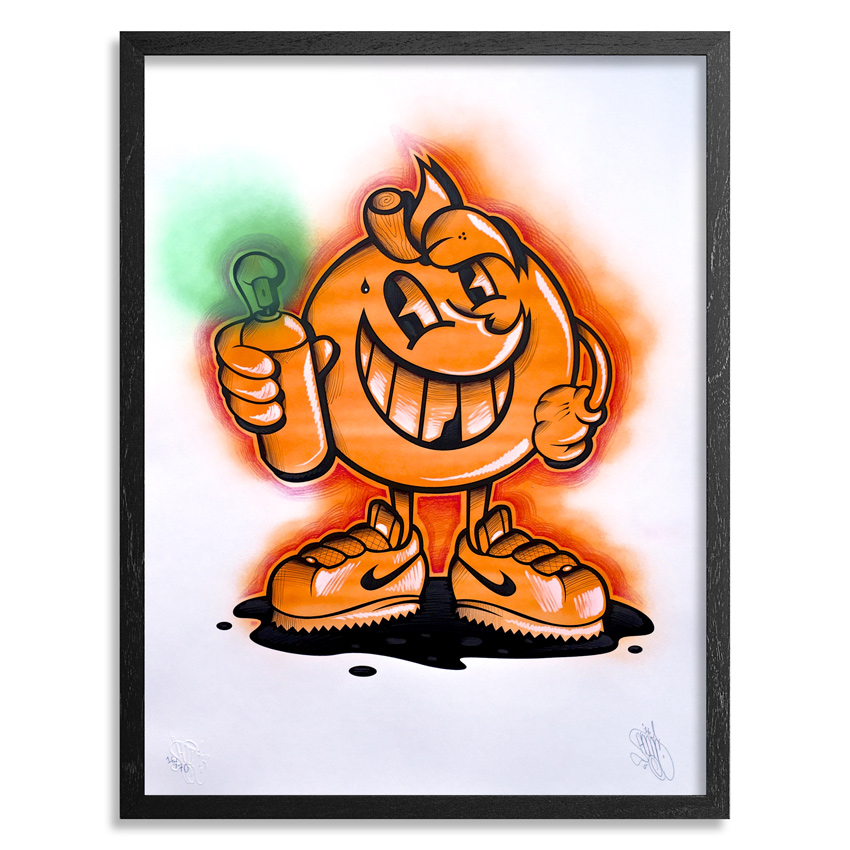 1x: We’re releasing this edition during this year’s Art Basel Miami, you’re a local down here, but when was the first year you headed out to Art Basel?
Atomik: I think around 2005 more or less.

1x: What other activation or events will you have while you’re down in Miami?
Atomik: This year I worked with the Orange Bowl Committee! We had an event where I displayed my art and painted live. Good times.

1x: Any big shows or events coming up that you’d like to share?
Atomik: In February I’ll participate in the Coconut Grove Arts festival. The festival is older than the Super Bowl!