Back in 2014, German artist Mirko Reisser aka Daim was the first to create work directly onto the massive 140 square meter exhibition wall at the Swiss art space zone contemporaine. His most recent exhibition The World Is Non Linear wrapped up earlier this year to critical and public acclaim as once again Daim used the massive exhibition space as his own personal studio. It is from these studio exercises that his latest editions are borne. Read on for an immersive look inside Daim’s recent exhibition and grab his latest limited edition prints from his continuing Daimwave series ?! IV and Shining Splashes right here on 1xRUN. . . 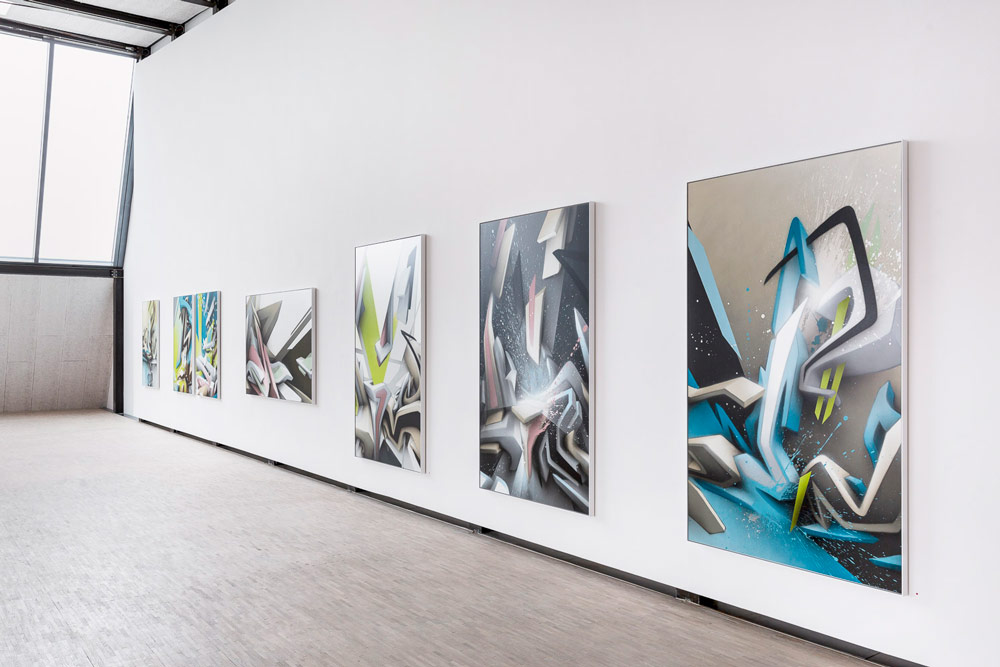 1x: Tell us a little bit about these two pieces for these latest editions…
Daim: The edition ”$? IV” was realized as a print reproduction of a series of four works that were created with spray paint on canvas and aluminum honeycomb panels. The first canvas work was created in 2003 in Portland, Oregon, the second work was realized for the exhibition “smell of paint in the air” at Kampnagel – Internationale Kulturfabrik in Hamburg. The third work of the series was shown at Hélène Bailly Gallery in Paris and is now in the possession of a New York based art collector.

The fourth work of this series and the original to the motif ”DEIM $? IV – Türkis” was realized in 2016 in the scope of the single exhibition “Mirko Reisser (DAIM) – The World is nonlinear” at zone contemporaine in Bern, Switzerland.  My writer name “Daim” is a formative characteristic of this newer works as well, though the letters can now not be equated with the work as easily as before. The play with the construction and the deconstruction of the letters, their abstraction and their figuration, the forms and the colors now seem to be even more on point, the readable reproduction of the letters is made even more complicated. But the beholder that engages himself with the works will not only be able to literally read them but also discover more spheres in the artworks, like the game with the dimensions which also refers to the title of the exhibition, since non-linearity in mathematics describes two and more dimensionality. 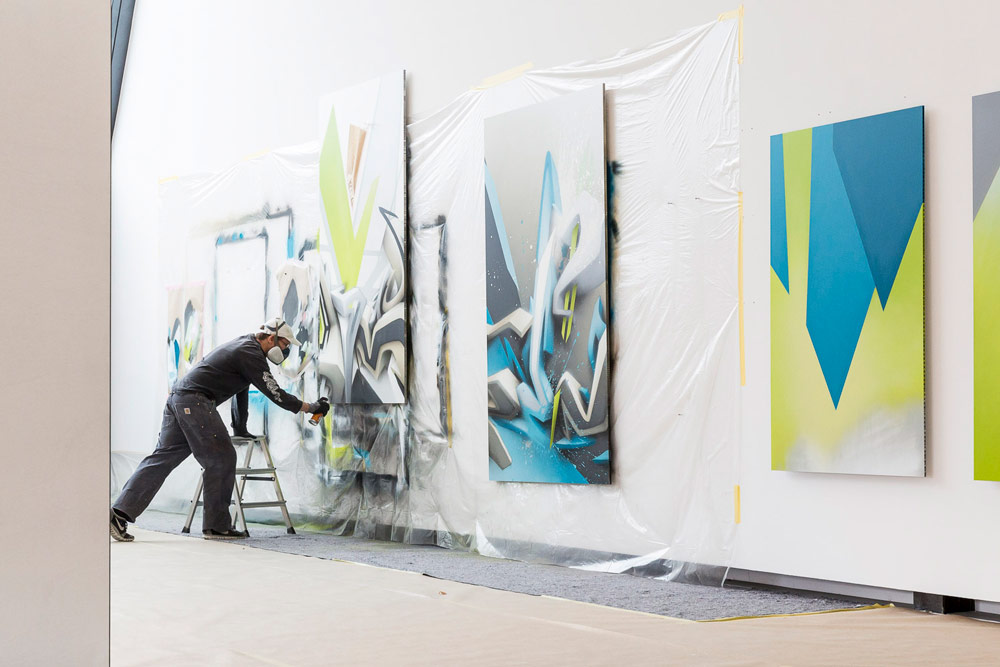 The original to the motif ”DAIMwave – Shining splashes” was realized in 2016 in the scope of the single exhibition “Mirko Reisser (DAIM) – The World is nonlinear” at zone contemporaine in Bern, Switzerland. [Read more about Daim’s installation at zone contempraine here.] For many years I have engaged with the “DAIMwave” series that shows the whole spectrum of my work. With time progressing the motif got more and more complex. In 1989, I began to write DAIM for the first time and even after all these years I still see the letters as a self-portrait. While working on the artworks and concentrating on a certain idea, technique an my style I also learned about myself and my personality. This in turn is reflected in my works. They get more and more complex as the development of the works corresponds with my development as a human being. Processes of ageing and maturing play a big role. 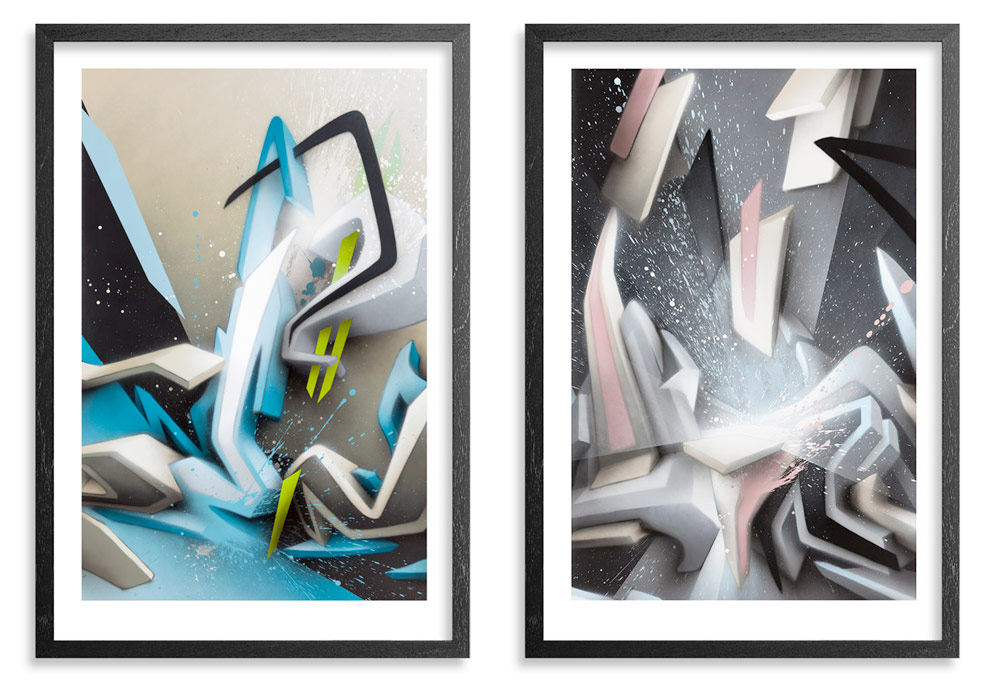 1x: You’ve been staying busy since our last release, bring us up to speed on what you have been up to in 2017 so far?
Daim:  2017 was a very exciting year for me! At the beginning of the year I realized a large format mural on site for the exhibition Cross the Streets at MACRO – Museo D’Arte Contemporanea in Rome. We were happy that it turned out to be a great success! The opening was attended by thousands of visitors. The exhibition examines Street Art through a kaleidoscope of different urban art movements such as Graffiti, Stencil Art, Pop-Surrealism, photography and film. More info here.

1x: What else is on your radar for the end of the year and early 2018? Any big shows or events coming up that you’d like to share?
Daim: Among a few other international artists I will realize a large-scale mural for a big project in the US. Also I am going to have an exhibition in Bremen, North-West Germany, from November 4th till January 7th, which I am very excited about! For DIALOG: Markus Genesius (Wow123) & Mirko Reisser (DAIM) – Long Distance at Städtische Galerie Bremen (Municipial gallery) Bremen-based artists are cooperating with internationally known artists to make the relationships of the Bremen art scene visible and promote its international network. The exhibition not only shows a juxtaposition of our canvas works that will uncover joint references. Together we will also work with the architectural circumstances and the context of the venue and realize a large format-mural directly on site. More info here. 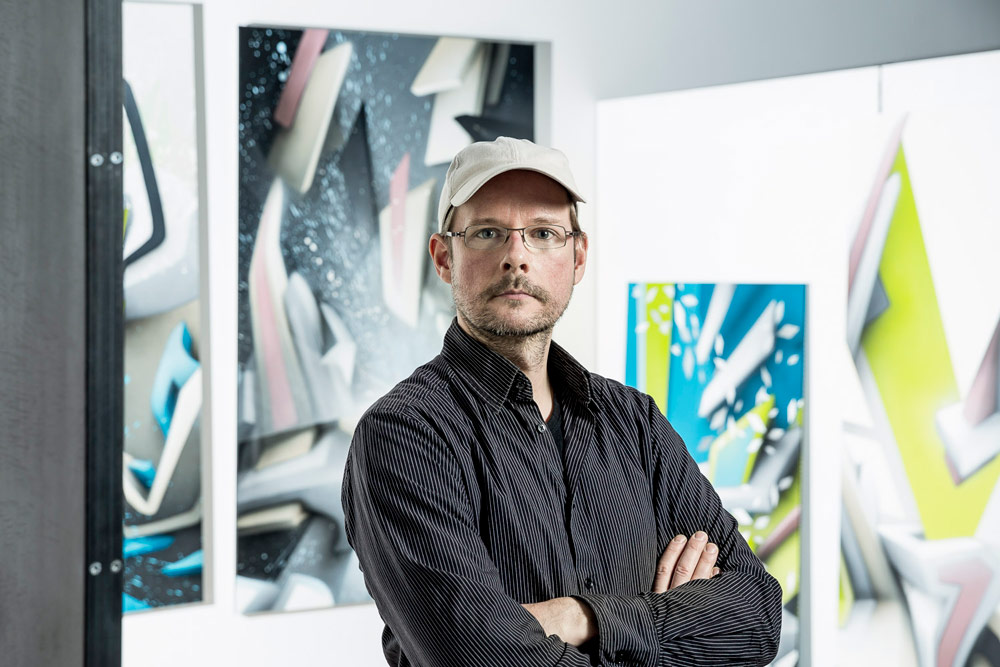