Detroit producer and 1xRUN’s own Drummer B has teamed up with 1xRUN alum Ron Zakrin for this collaborative collector’s edition vinyl and print set for Drummer B’s first official album Spacebounce. With 7 new tracks from Drummer B and new artwork from Zakrin for the cover Spacebounce marks a departure for Drummer as he blends hip-hop and electronic music for a unique new sound all his own. We caught up with both Drummer and Zakrin to talk about the album, it’s artwork and more. . .

1x: Let’s start by talking a little about the album, anything immediate you want to highlight?
Drummer B:  Well this is my first official release on my label Soul Touch Recording. I have projects that i have released in the past digitally and but because this my first vinyl i consider it my first official release. This album is also new in style and flavor or music that people are not use to hearing from me because i come from a strong hip hop back ground. The sound of this album is a influence of all the music that i grew up to and hearing and making threw the years. I call this new sound of mine Space Bounce because its not just techno or just hip hop or trap its just Space Bounce. And last i was able to do a calibration with my uncle the late great Allen Barnes from legendary jazz group The Black Byrds.

1x: Where was this album recorded, and how long did it take from start to finish?
Drummer B: This album was recorded at my home studio the DrumSet and at United Sounds studio. I choose to recorded and mix sum of the tracks there because of the history of the studio as far as all of the legendary albums that were recorded there, my uncle Allen use to tell me stories of him playing with the Parliaments there and other Motown artist and also because as a kid i lived around the corner from it and always dreamed of recording there but it was always closed down until recently.This project roughly took like 8 months from start to finish considering every thing i had to learn to press up vinyl which take up to 4 months alone getting the cover done mastering and getting the right team together to push and market this project. The music really only took a few weeks to make the music is always the easy part. 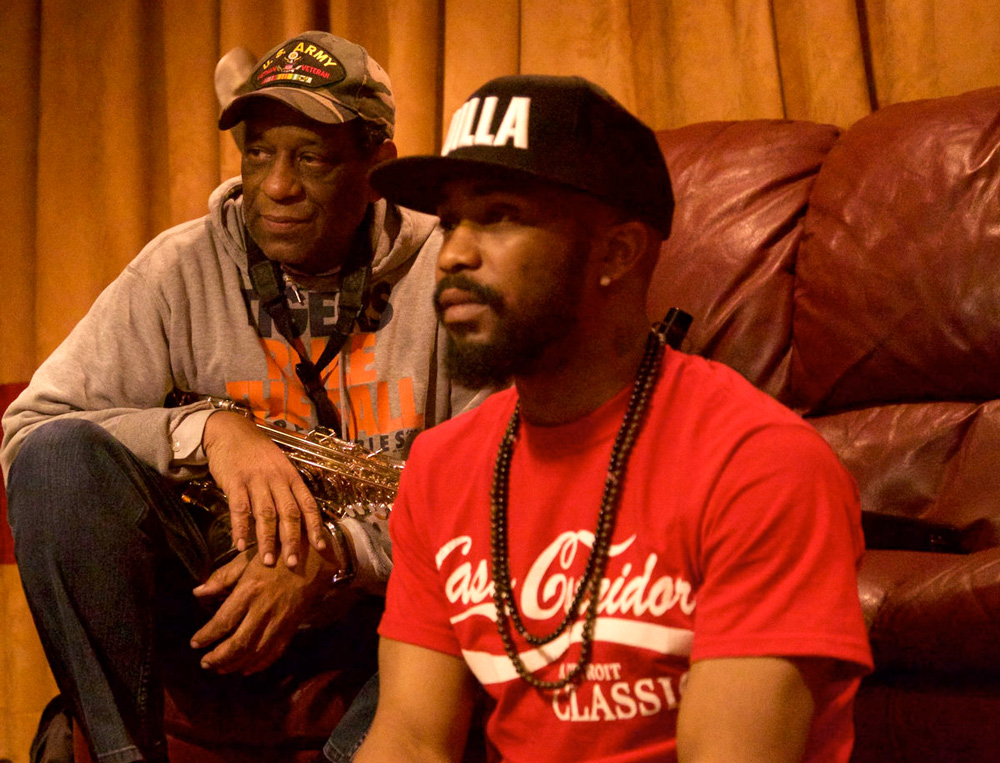 1x: Tell us a little bit about the album cover for this image and why you picked Ron to do the artwork for cover?
Drummer B:  Well with the album tittle being called Space Bounce the first thing  that came to mind to me was an astronaut in space, and some how and I was thinking of how I could incorporate musical equipment and the Detroit flag all together to have sum representation of the city on there as well. The waves on the screen of the drum machine on the astronaut’s chest waves are actually my vocals saying Space Bounce. I wanted the heart of his suit to be like his life support.

I choose to work with Ron because I became a fan of his work with the 1xRUN team. I like how he used images of synths and drum machines. He also has a music background which made it easy for us to connect outside of just art. It made it easy for him to see my vision. Plus he’s born and raised in Detroit as well.
Ron Zakrin: I just picked up what Drummer was laying down and ran with it.

1x: About how long did this image take from start to finish?
Zakrin: About 3 weeks.

1x: What is unique about this imagery compared with your other work??
Zakrin: Most of my work is based on subjects that exist on terraforma, rarely do I go beyond the stratosphere. This work is a welcome departure from that, and the painting g has a bit more of a photo realistic quality than I usually employ.

1x: Why should people buy this one of these records and prints?
Zakrin: For the sake of cerebral expansion.

1x: Anything you want to add that we left out?
Drummer: This record is a timeless album, great music that any one can enjoy and a great representation of true born and raised Detroit with the influence of all of the great music that has come before me. You should buy the prints because this is a great example of how art and music is the same and compliments each other. Ron is showcasing his skills at his finest and this is also historical in it own right being 1xRUN’s first vinyl cover and print release, which is an honor to be apart in an of itself.