Gathering over 50 artists from around the globe, curator Glenn Barr had one simple request for his group show Lyric 3: Each piece of art must be 12 x 12 inches, paying homage to the timeless beauty that can fit on the cover of a vinyl record. In the spirit of the group show we take a look at a few pieces from the exhibition to delve into the musical influences that inspired some of the works in the show. 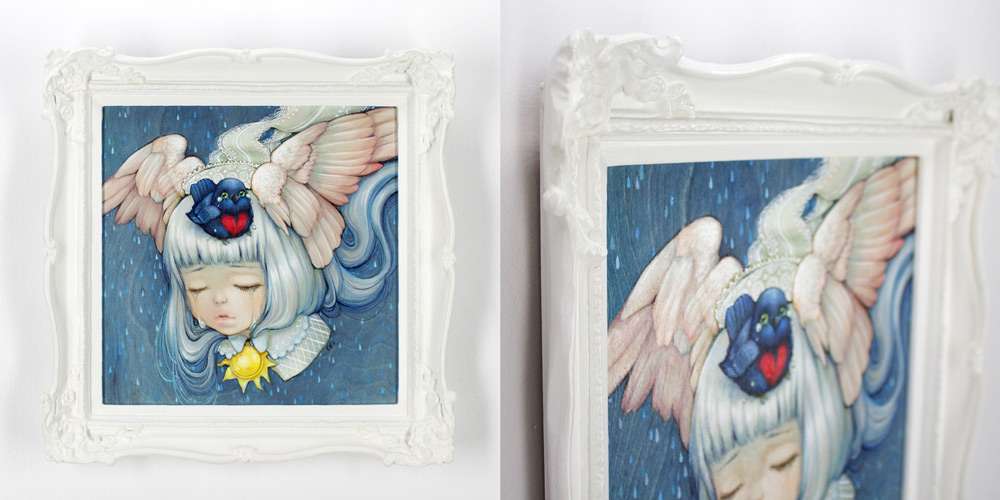 For his piece Luke Chueh decided to tackle Pink Floyd’s iconic Wish You Were Here album. Stream the album below and check out Chueh’s take below. Head to Lyric 3 for additional information on this piece.

Breaking from the deep psychedlia of 60s Floyd, we bounce up to the mid 1990s for Hawaiian artist Defer’s piece inspired by Tupac Shakur’s third album Me Against The World. Read on for more from Defer and for the album’s stream below. 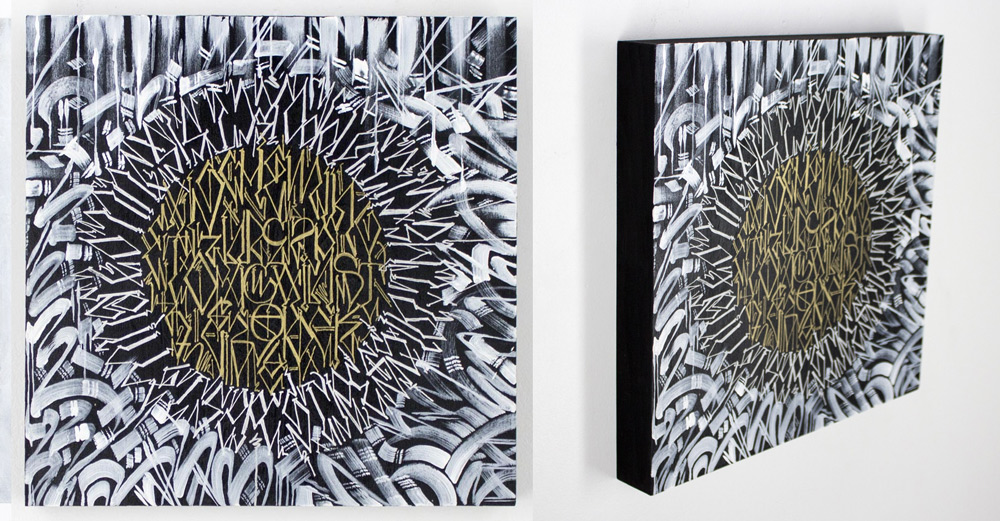 “The inspiration for my piece for this show is from Tupac Shakur’s lyrics from ‘Me Against The World.’ This song was written in a dark and controversial time in his short life. To me this song captures the feeling of defiance against all odds. this painting is an expression of having strength through times of adversity…” Defer said of the song. Jump to 4:00 in to stream “Me Against The World” and check out more of Defer’s piece in Lyric 3 here.

We continue with another Hawaiian artist, Kamea Hadar, who pulled his inspiration from the song “Hawaii ’78” by Israel Kamakawiwo’ole. “The song opens with the Hawaii state motto: “Ua mau ke ea O ka aina I ka pono O Hawaii” or “The life of the land is perpetuated in righteousness” and goes on to ask what would happen if ancient Kings and Queens could see modern-day Hawaii. For those of you UFC lovers this is also the song that Hawaiian UFC fighter BJ Penn walks out to,” Hadar said of his inspiration for this piece. Check out Hawaii ’78 from Kamea in Lyric 3 and stream the song below. 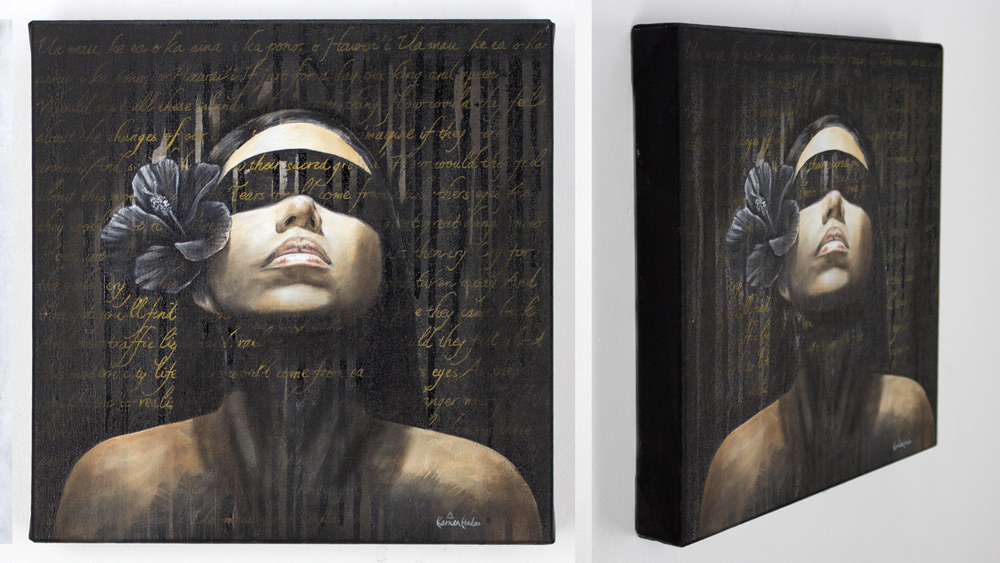 Hawaii ’78 by Kamea Hadar – Click To Purchase & For Additional Information

Next we take a look at a piece by Detroit artist Brian Lacey, who takes a deep cut and a deep meaning from Nas’ 2002 album The Lost Tapes, and the track “No Idea’s Original” which pays tribute to the late artist Tania. 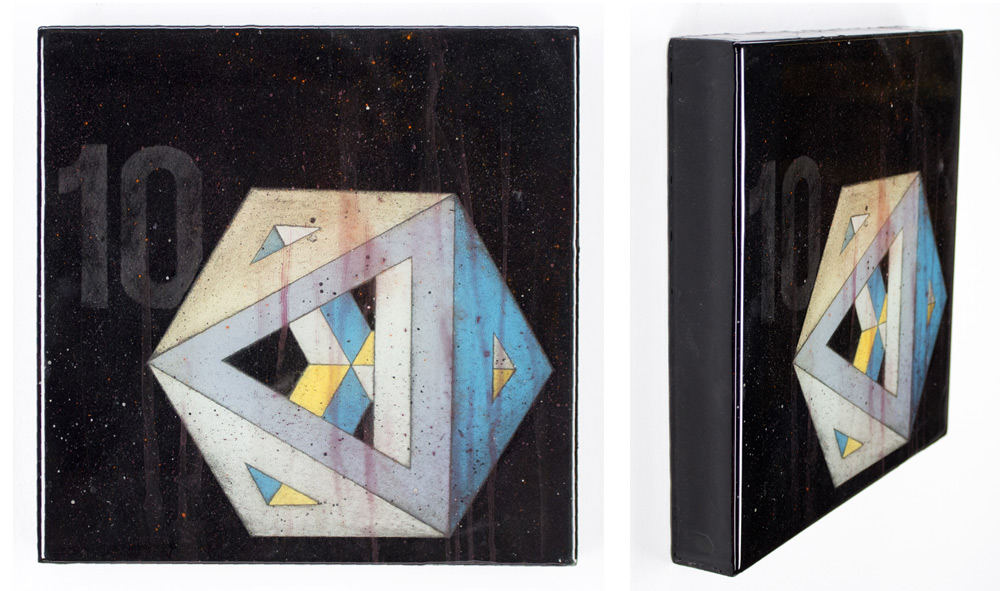 10 Evergreen by Brian Lacey – Click To Purchase & For Additional Information

“The track No Idea’s Original has an over arching message which states that original ideas have been exhausted and ingenuity is now at a point of recycling previous ideas that have already been explored.

Using this notion as the basis for the piece, I drew direct inspiration from the late artist Tania’s 1968 mural in the Lower East Side of New York City which is known to be the first non-commercial public mural. I feel Tania’s mural in conjunction with the theme expressed in “No Idea’s Original” is highly relevant to the current state of contemporary art and the resurgence of murals,” Brian Lacey said.

Next we head to Vans The Omega who pulled his inspiration from Sade’s emotional song Pearls. 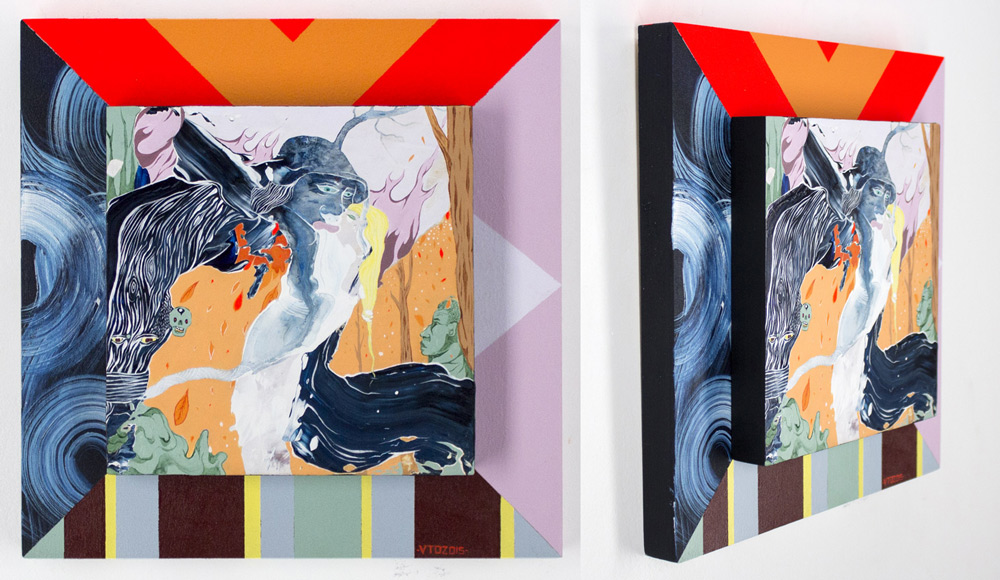 “This particular track has moved me very deeply since I was a child in an emotional way. Instead of directly making strict reference to the words in a pictorial sense I have tried to respond to them by answering what is being called upon during the verses themselves in a fantastical manner as if the figure could hear the song herself and daydream the sorrow away amongst her search for “Pearls on the roadside”…

The outer shape depicts natures elements in a 4 directional way which steps up towards the center image which is the dream state. Creation holds her close and affords her the kiss of life as the heaven rains white pearls by the roadside. The Somalian women is drenched in light and is watched by ancestors, devas and and botanical s alike willing her survival.

Jakob Westman pulled his inspiration from The Smiths album The Queen Is Dead, a cover which he also created his piece on. 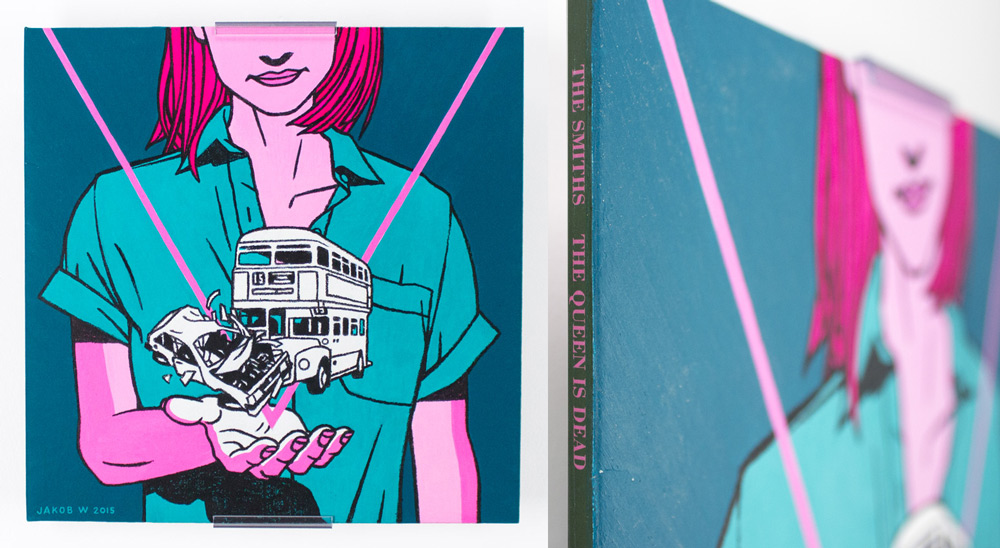 “I have a close connection to The Smiths from my teens and decided to build my piece around the lyrics to their song ”There Is A Light That Never Goes Out” and in particular around the lines below.

It’s a song with many layers and I tried to get as much as possible into the image. I used the pink triangle to draw the eye to the crash, but also to touch on the homosexual overtones. Another very subtle detail is the Vauxhall Astra. Apart from being a British car manufacturer, Vauxhall is also referenced in the title of Morrissey’s 4th solo album ”Vauxhall and I” and an area of London noted for its gay clubs.” – Jakob Westman

Be sure to check out all the remaining works from Lyric 3 here.