We welcome back Bay-Area artists Gats as he returns with his latest letter press piece in his continuing series. Another beautifully printed letter press Cracked again finds the artist dealing with duality. Read on to see Gats recent murals and process shots of Cracked on the press… 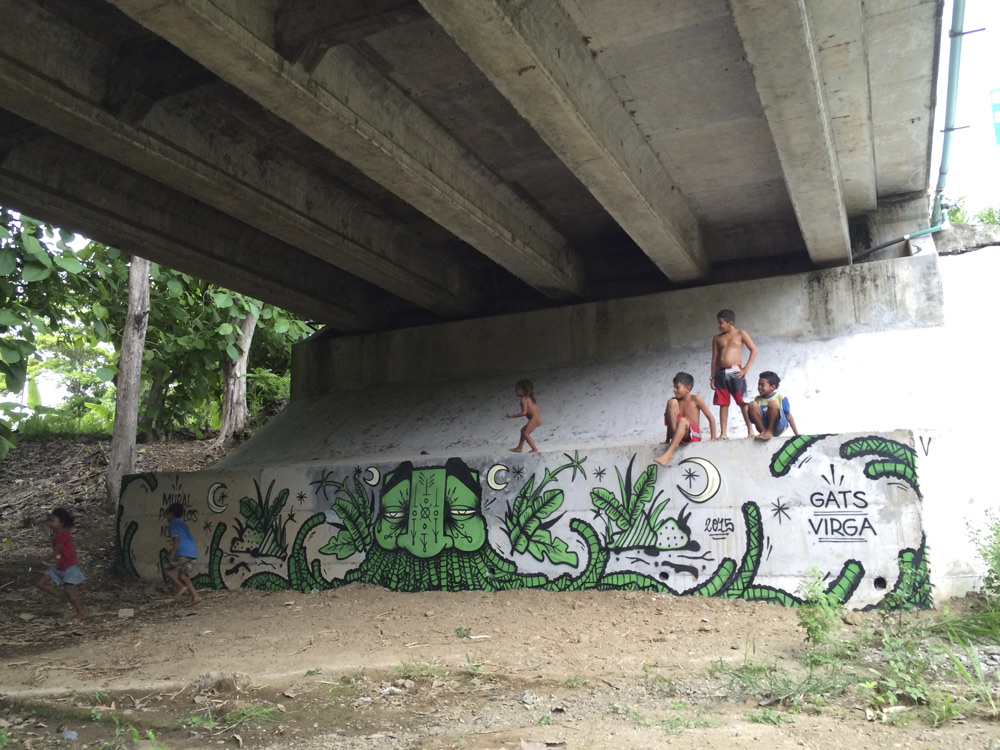 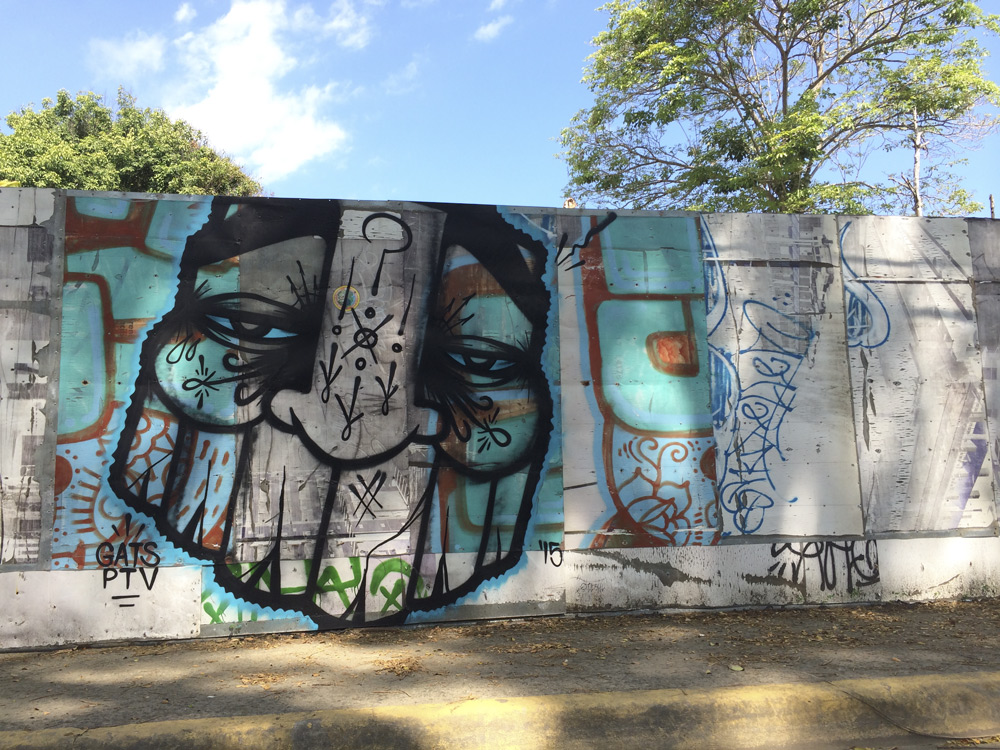 1xRun: Tell us a little about this series, was this piece part of a recent theme or series that you had?
Gats: This piece is part of a series of fourteen 11”x 17” illustrations that all share a similar boarder of text. I then used the same boarded in a 18”x24” illustration and a 60’ x 15’ mural. I’m planning on showing all the originals together at a gallery, but I want to release the prints first. I like using text as cross hatching in my pieces so that from a distance it appears as shading and bolder shapes, but when you look at it close you can decipher more elaborate symbolism.

1xRun: What materials were used to create this piece ?
Gats: I originally illustrated this piece with black Sharpie on 2ply Vellum Bristol Board then transferred it onto plates to be letter pressed. The paper was 11”x17” with a half inch margin (10”x16” image size) to account for a quarter inch rabbit on a frame. I chose Sharpie for a few reasons; first off because I was traveling and when you’re in the middle of nowhere, hours from an art store, you can still find a Sharpie at a gas station. I burned through a lot of these. Secondly, I’m addicted to the bleed…the very reason I hated them for so many years. If you move slow to fast you can flare them similar to the way you control a can of spray paint for various line quality. I can’t get that effect the same way with a Micron. 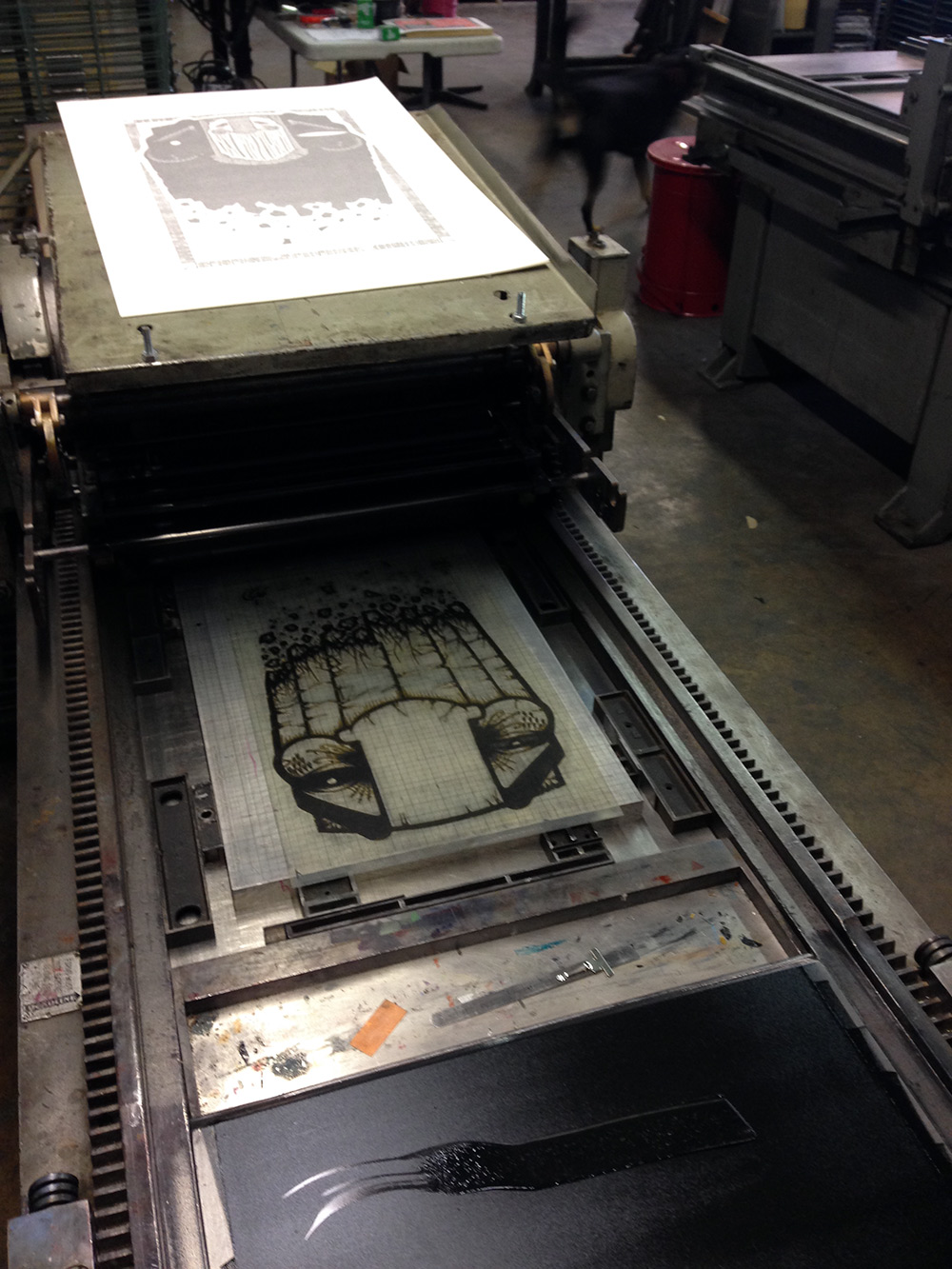 Finally, it’s keeping with the graffiti tradition of stealing a Sharpie and taking it straight to your black book. These illustrations became mockups for pieces I painted large scale in the streets afterwards. The concept of taking a modern graffiti medium and combining it with mid-15th Century technology appeals to me because it pays homage to the history of typography. The press liberated literature from monasteries the way that graffiti liberated artwork from private collections. Aesthetically, nothing compares to being able to feel the artwork physically indented into the paper.

1xRun: When was the piece drawn?
Gats: I binge drew this series over the first half of 2013 and then the second half of the year binge painted murals and bombed across the US incorporating the elements I experimented within the illustrations. This series of prints is basically my black book for 2013. 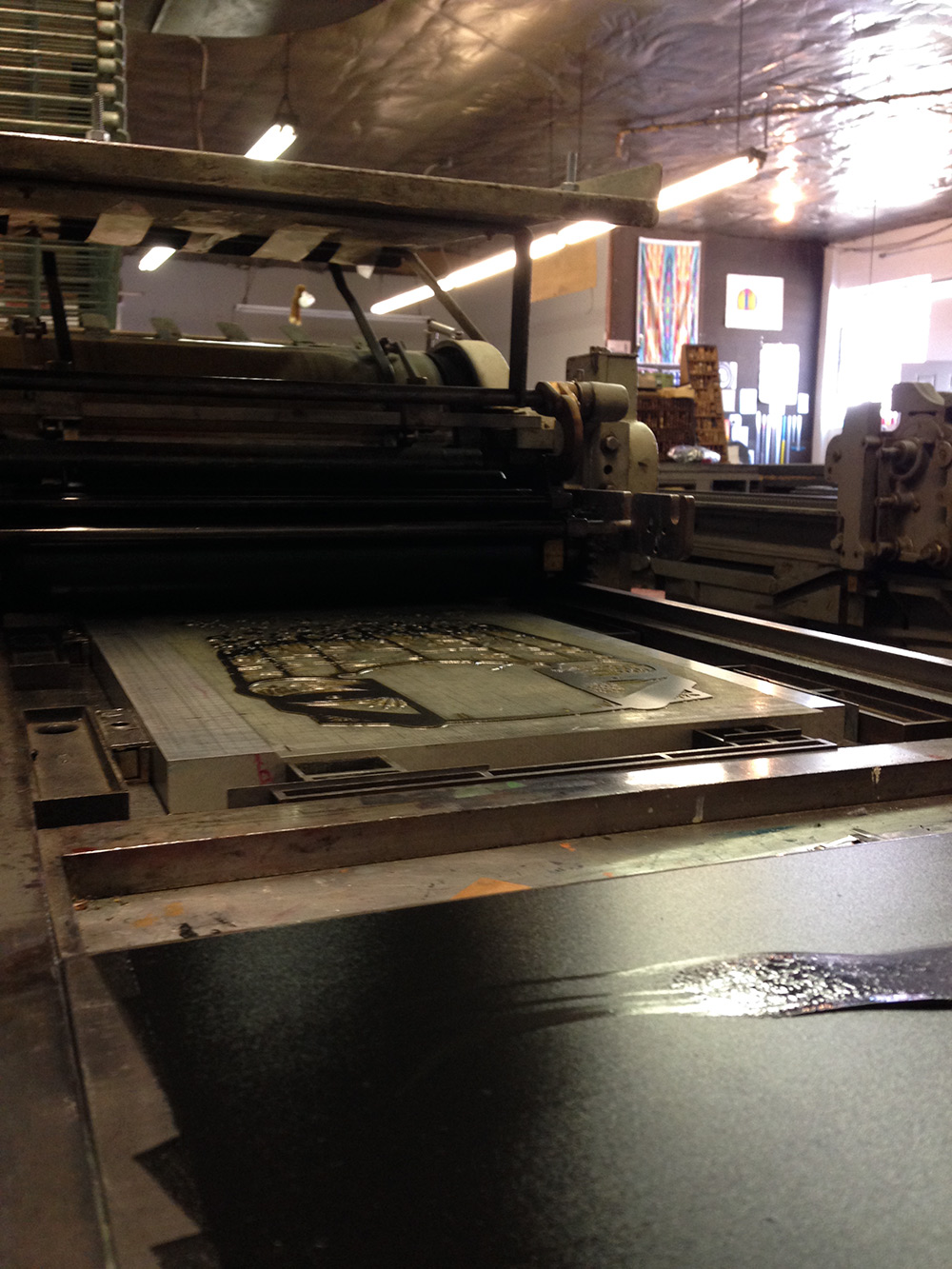 1xRun: Anything immediate you would like us to highlight?
Gats: The text around the boarder reads, “TIME TO GO,” the final words we say when we leave a painting spot in a rush. It works well with the box trucks since they’re always on the go. 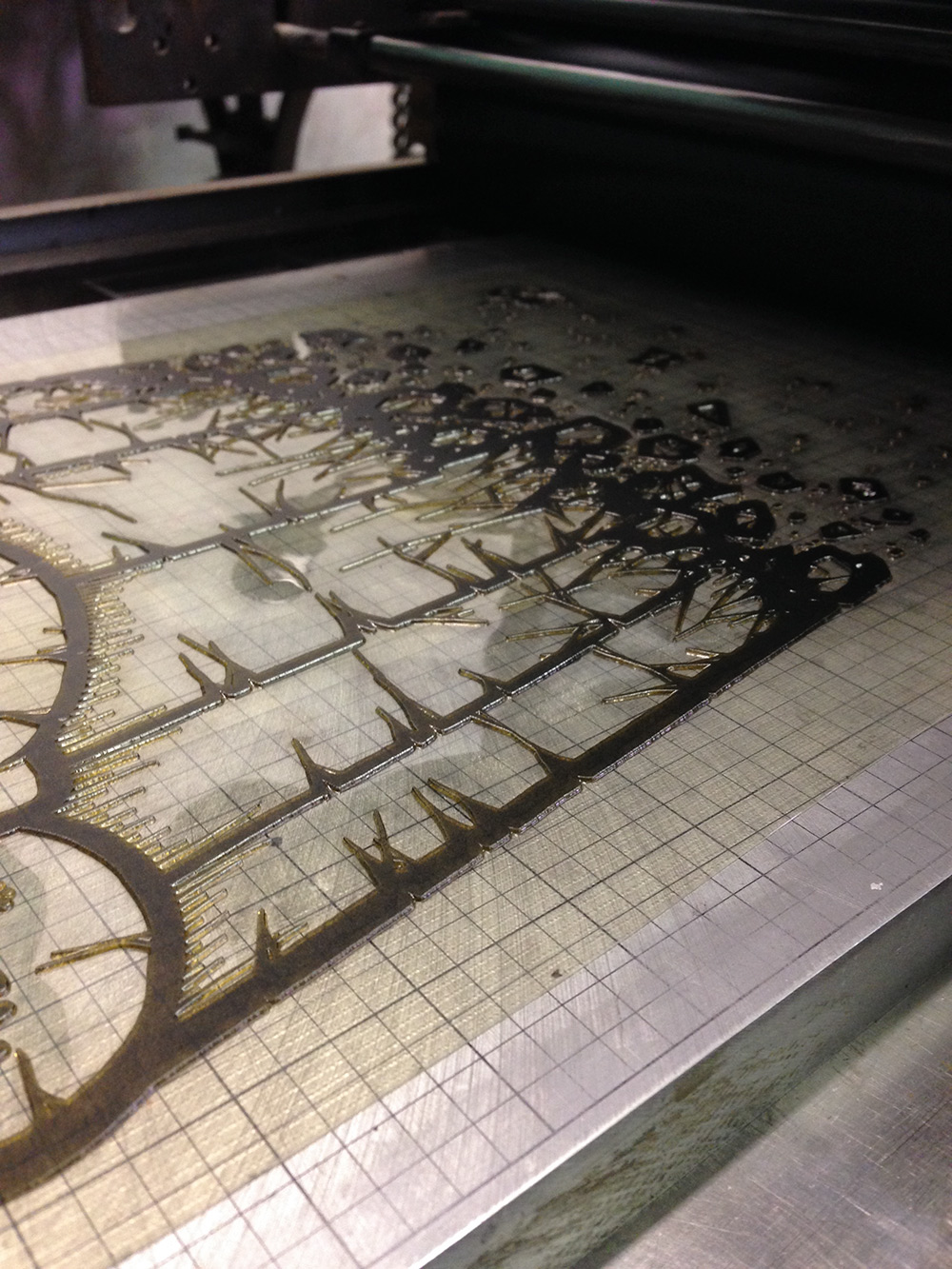 1xRun: How long did the piece take?
Gats: I spent a couple days drawing the original and then a day doing the color separations. That’s kind of a hard question because you spend way more time staring at it and figuring out what you’re going to do or change than you do physically drawing it. 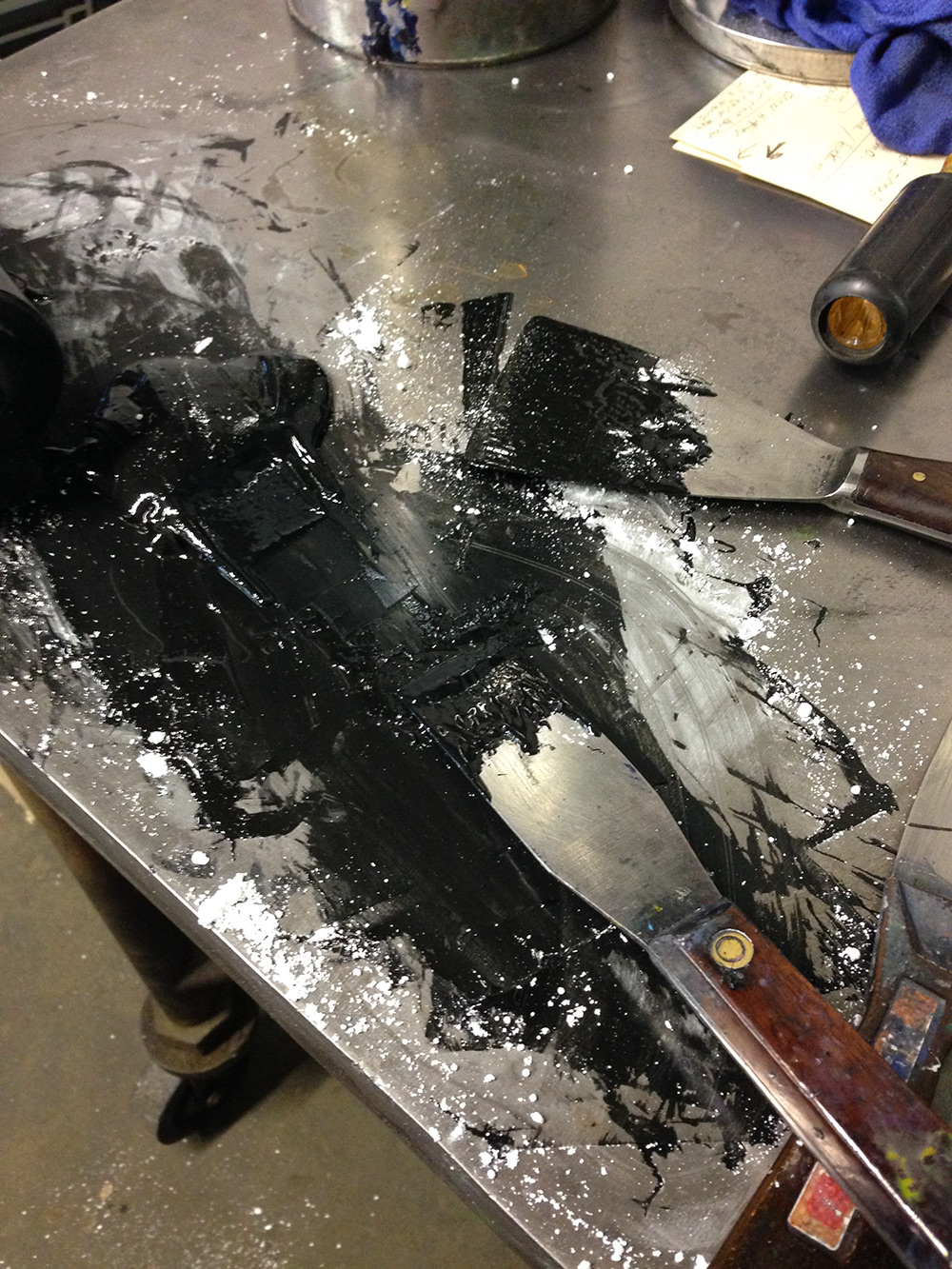 1xRun: What is unique about this piece?
Gats: This is the first print I’ve done of trucks and the first I’ve had the mask and throwies together. It combines a lot of elements I’ve been playing with individually on the street. It’s also the first ever letterpress piece I’ve released. 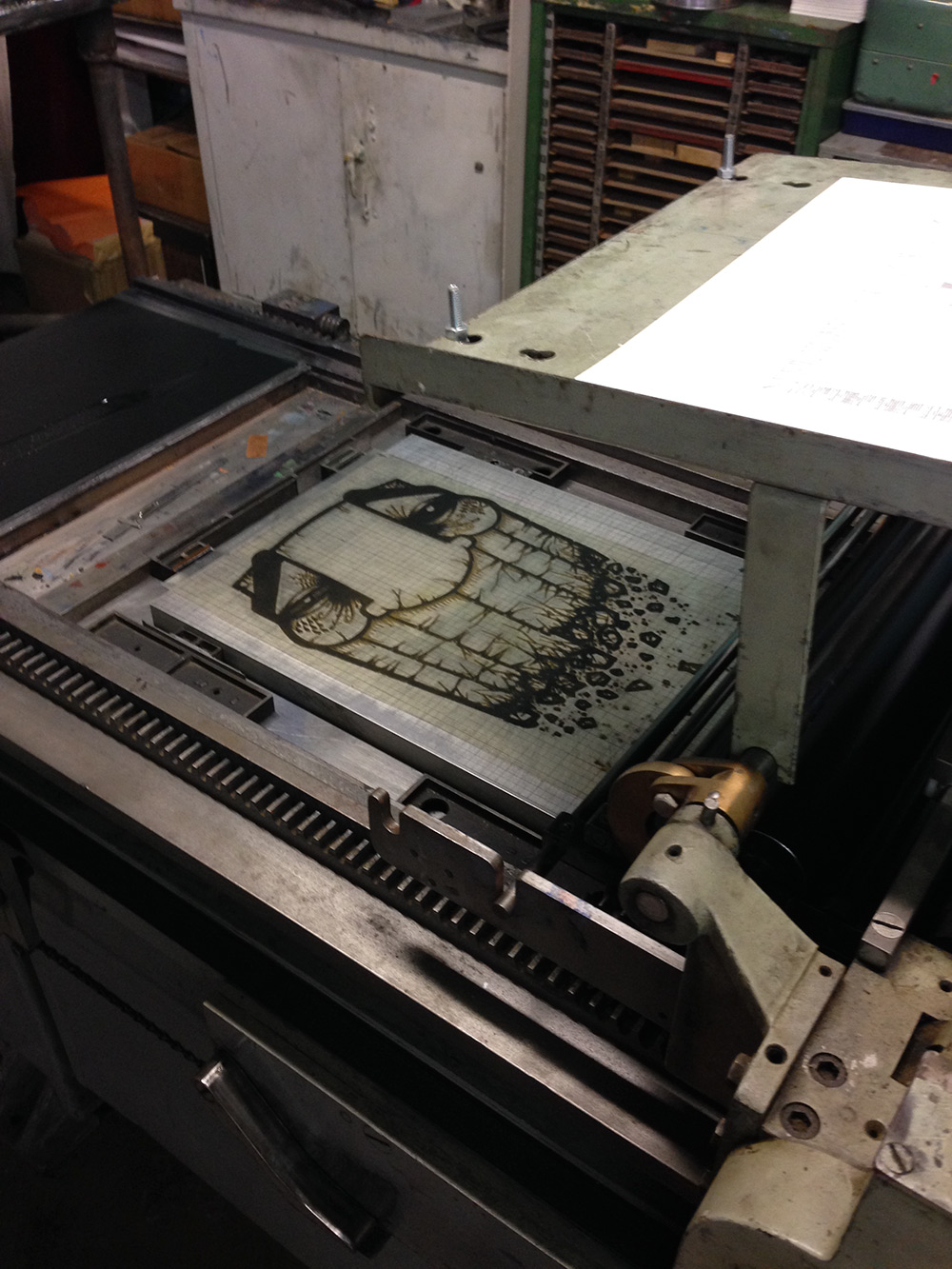 1xRun: Why should people buy this print?
Gats: The vast majority of my work I paint in the streets for everyone to view for free. Sometimes I choose painting over feeding myself. When you buy artwork from me that money goes directly back into creating public artwork. That also means that the majority of my work will be destroyed. This print is a way to preserve a small piece of my greater body of work. 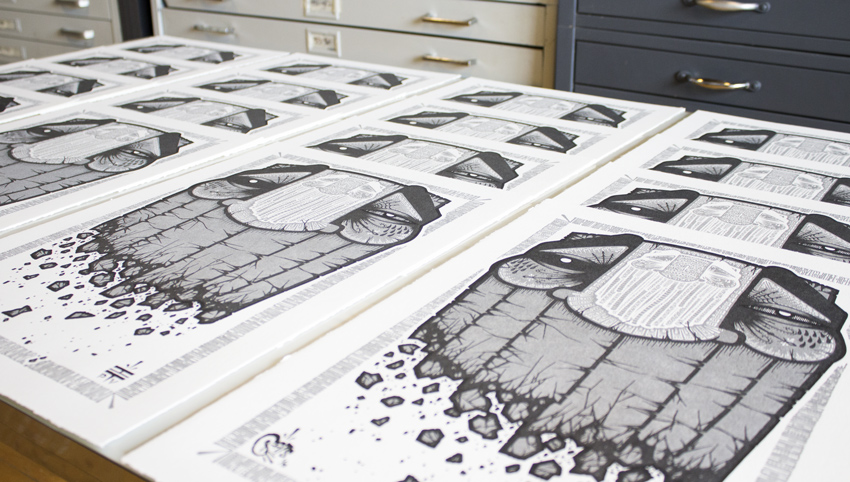 1xRun: When did you first start making art? What was your first piece?
Gats: I’ve been making art since I was old enough to hold a crayon. I was lucky enough to have really good artist roll models around me. I don’t think I really accepted that I was an artist until about 2006 though. I’ve been casually doing graffiti since the late 90’s but I consider 2008 as a turning point when I kind of lost my mind and started binge painting every night. I painted in six other countries that year. It crept up on me over the past few years, but at this point I’ve realized that graffiti is what I do full time.

My first graffiti piece was at an abandoned camp when I was in high school. My hands were covered in paint so I spray painted them tan so my mom wouldn’t notice. It was ridiculous but she didn’t notice. Ha ha. From that first piece I was addicted. I immediately thought to myself, “I can do that better.” I snuck out that night and painting another one. Being self critical still keeps me going. The next piece will be better.

1xRun: Do you listen to music while you work? If so what?
Gats: It varies. When the weather is alright I draw outside and just listen to the ocean or what ever I’m around. I try to get far away from people. I was probably listening to a lot of Fall of Efrafa, and maybe a mix tape Aura from EK / CBS made. Lately I’ve been listening to Perkele and Brigada Flores Magon when I draw. When I’m painting a wall I generally don’t listen to music in case a random vigilante tries to punch me in the back of the head.

1xRun: If you could collaborate with any living artist who would it be and why? Any deceased artists?
Gats: That’s a hard one. There are artists I really like, but are so aesthetically different that I don’t feel our work would look good together. I’m really proud to work with Ras Terms and Dead Eyes. We all have similar enough line quality that it flows together well. For the latter, Keith Haring would be cool. I like the bold simplicity. It’d be fun to pattern all my detail work in there. Besides, you gotta love a guy that goes out of his way to paint children’s hospitals.

1xRun: What was the first piece of art that you bought? Do you still have it? The last?
Gats: Other than an album or a skateboard, I think the first piece of art I bought that’s sole function was art was a few linoleum cut prints off the street in Brooklyn. I don’t recall her name right now but I still have them. My favorite was the one with two punks hanging out a window they had just un-boarded waving a crowbar and a squatter flag. The last piece that I bought would a little Swampy shrinky dink piece for $5. With his eyes closed, he drew his skull character so the elements look all off register and scrambled up. I just like it because you wouldn’t even know it was a Swampy unless someone explained it to you. Ha ha.

1xRun: Where else can people find you?
Gats: Flickr – Tumblr –