Bay Area artist Gats returns with his latest edition Serpents from his continuing letter press series. Gats is constantly traveling and with a tireless worth ethic his murals, pieces and tags can be seen throughout the world from as his hometown in San Francsico & Oakland around the world to Costa Rica, Philippines and Mexico. You won’t just find his work on walls and traditional canvases, his signature work is seen at everywhere from skate parks (and decks) to the arms of fans with new tattoos to vans, bathroom mirrors, concert venue walls and everything in between. Pick up Gats’ latest letter press here and read on to learn more about Gats’ ongoing series… 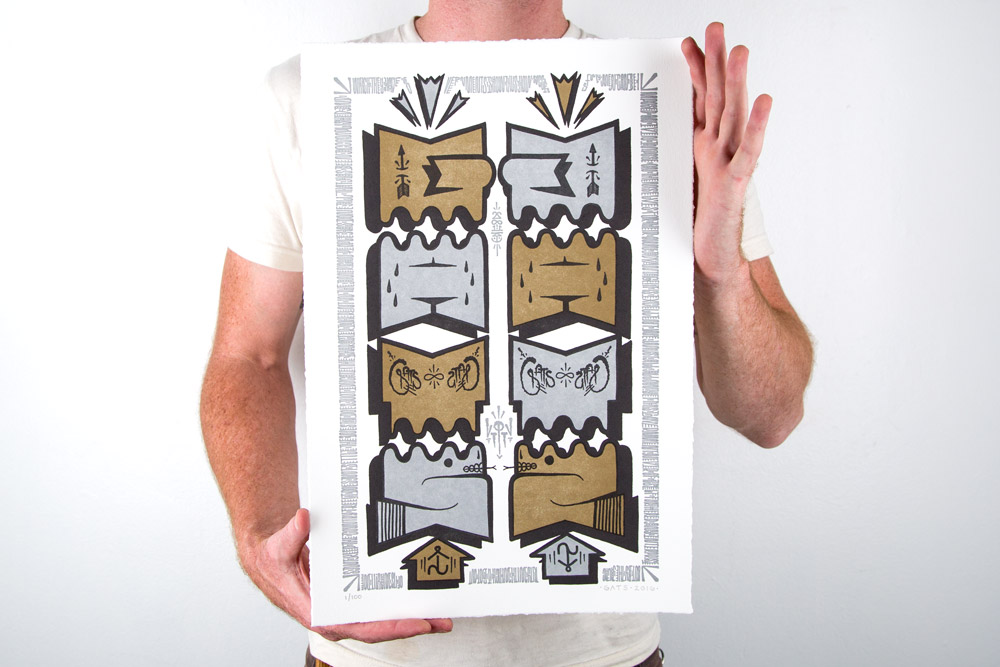 1x: Tell us a little bit about this piece, how did it come about?
Gats: The serpent is symbolic of the fertility of nature and man’s connection to the earth. It is also associated with early understanding of the sky, galaxy and the infinite. It’s appropriate for graffiti because like a serpent sheds its skin, I’m leaving behind a form of myself and continuing on.

Growing up in California and living on a fault line, I’m also fascinated by earth quakes which has been showing up in my recent works. In Norse Mythology, the trickster god Loki orchestrated the death of a god named Baldr. As punishment Loki was bound by the intestines of one of his sons and a serpent was placed above him. When venom drips on him he writhes in pain creating earth quakes. 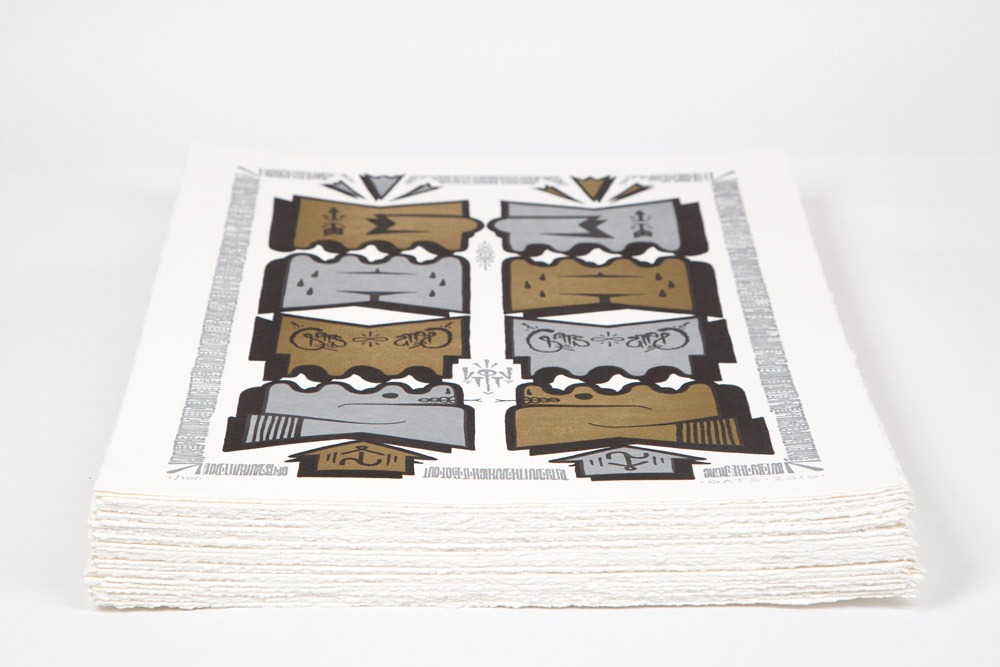 Being an artist who works often illegally, I’m also interested in the tricksters seen in different mythologies. Loki fathered the World Serpent. I like the idea of sneaking around and creating serpents in the streets.

It’s also a back lash for me. At some point we shifted to believe that serpents represent evil. This was around the time that we decided to distance ourselves from nature. Learning that in the past, serpents were seen as symbols of knowledge and salvation made me want to bring them into my work. 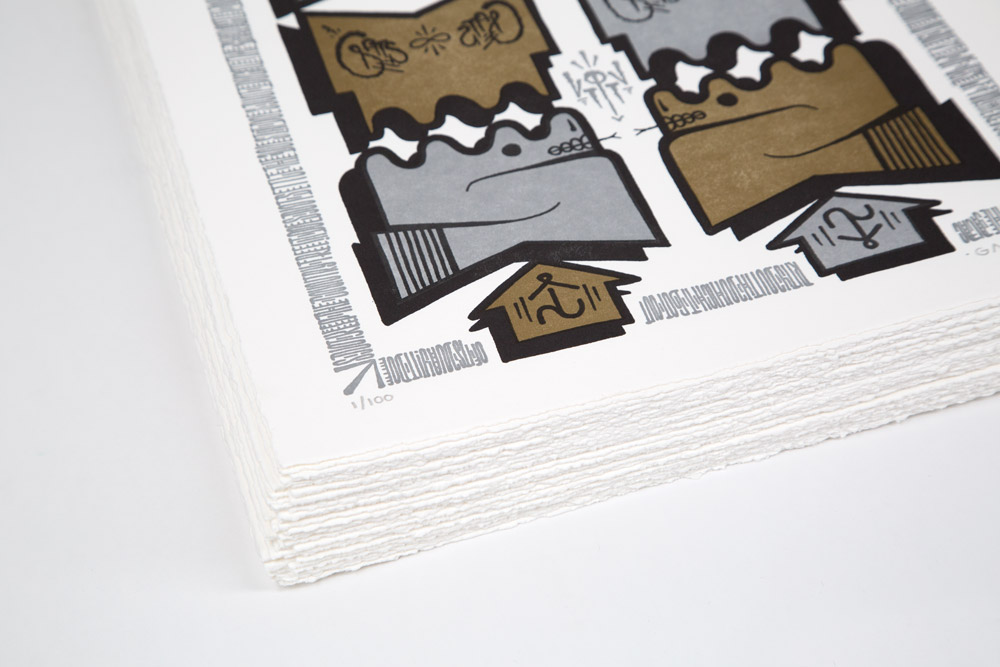 1x: Was this piece part of a recent theme or series that you had?
Gats: This piece is part of a series of fourteen 11”x 17” illustrations that all share a similar boarder of text. I then used the same boarded in a 18”x24” illustration and a 60’ x 15’ mural. I’m planning on showing all the originals together at a gallery, but I want to release the prints first. I like using text as cross hatching in my pieces so that from a distance it appears as shading and bolder shapes, but when you look at it close you can decipher more elaborate symbolism. 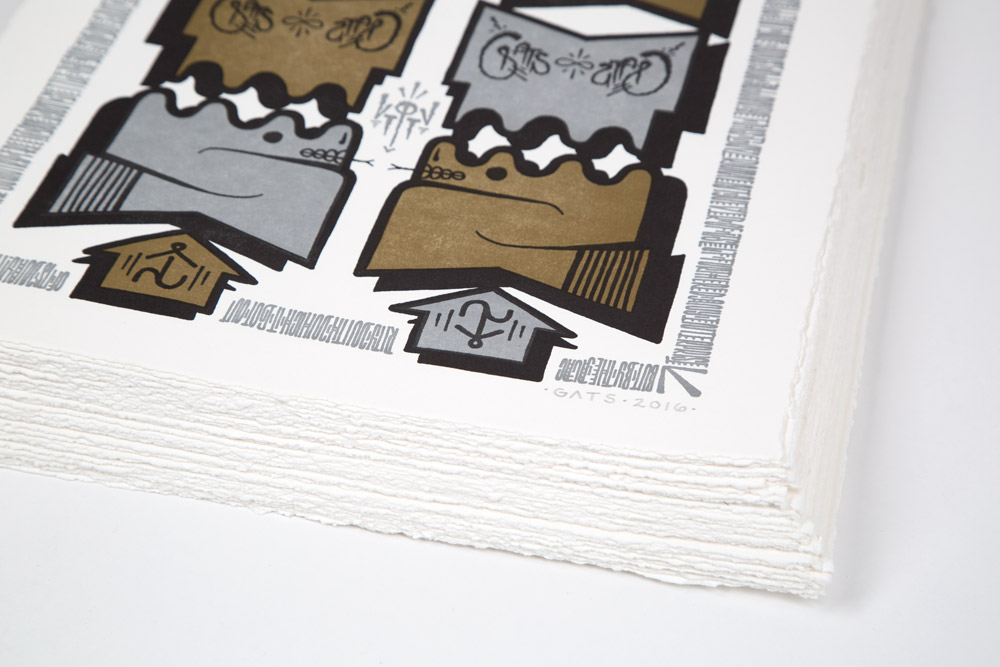 1xRUN: What materials were used to create this piece ?
Gats: I originally illustrated this piece with black Sharpie on 2ply Vellum Bristol Board then transferred it onto plates to be letter pressed. The paper was 11”x17” with a half inch margin (10”x16” image size) to account for a quarter inch rabbit on a frame. I chose Sharpie for a few reasons; first off because I was traveling and when you’re in the middle of nowhere, hours from an art store, you can still find a Sharpie at a gas station. I burned through a lot of these. Secondly, I’m addicted to the bleed…the very reason I hated them for so many years. If you move slow to fast you can flare them similar to the way you control a can of spray paint for various line quality. I can’t get that effect the same way with a Micron. Finally, it’s keeping with the graffiti tradition of stealing a Sharpie and taking it straight to your black book. These illustrations became mockups for pieces I painted large scale in the streets afterwards. The concept of taking a modern graffiti medium and combining it with mid-15th Century technology appeals to me because it pays homage to the history of typography. The press liberated literature from monasteries the way that graffiti liberated artwork from private collections. Aesthetically, nothing compares to being able to feel the artwork physically indented into the paper. 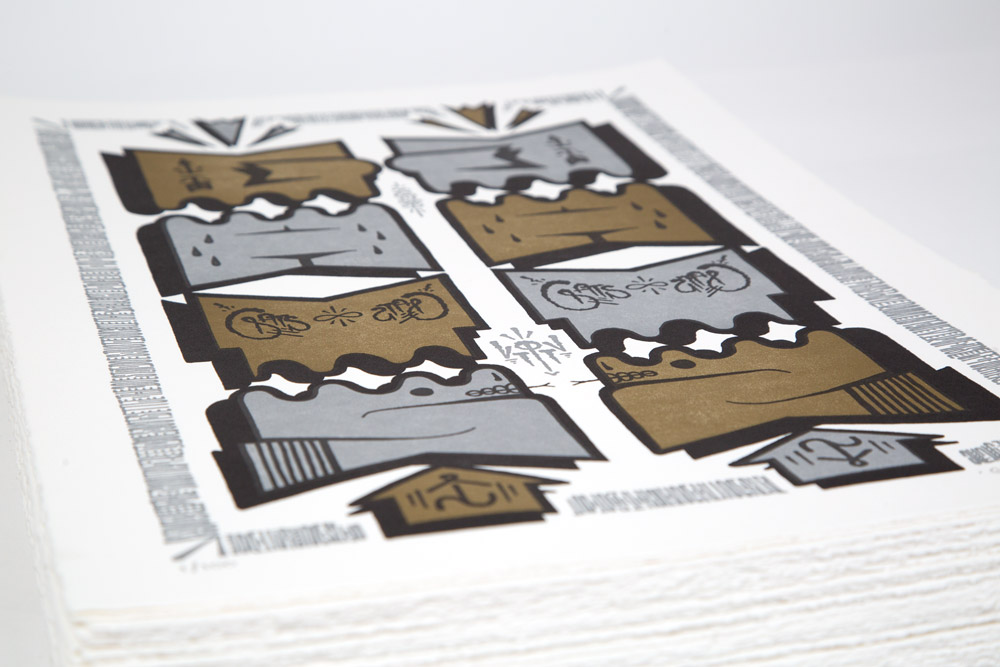 1xRUN: When was the piece drawn?
Gats: I binge drew this series over the first half of 2013 and then the second half of the year binge painted murals and bombed across the US incorporating the elements I experimented within the illustrations. This series of prints is basically my black book for 2013.

1xRUN: Anything immediate you would like us to highlight?
Gats: The text around the boarder reads, “TIME TO GO,” the final words we say when we leave a painting spot in a rush. It works well with the box trucks since they’re always on the go. 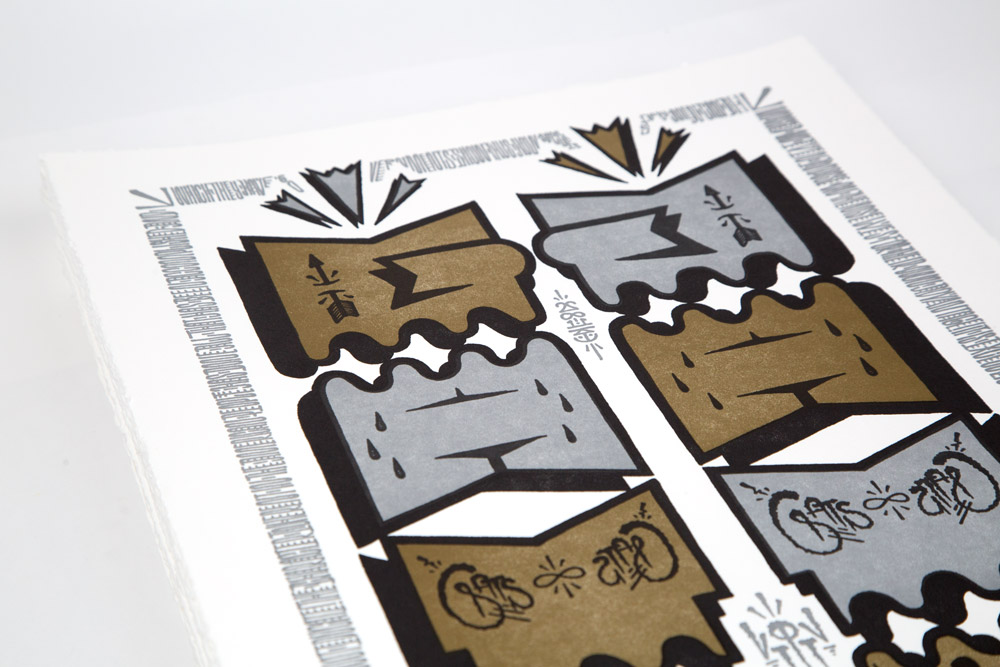 1xRUN: How long did the piece take?
Gats: I spent a couple days drawing the original and then a day doing the color separations. That’s kind of a hard question because you spend way more time staring at it and figuring out what you’re going to do or change than you do physically drawing it. 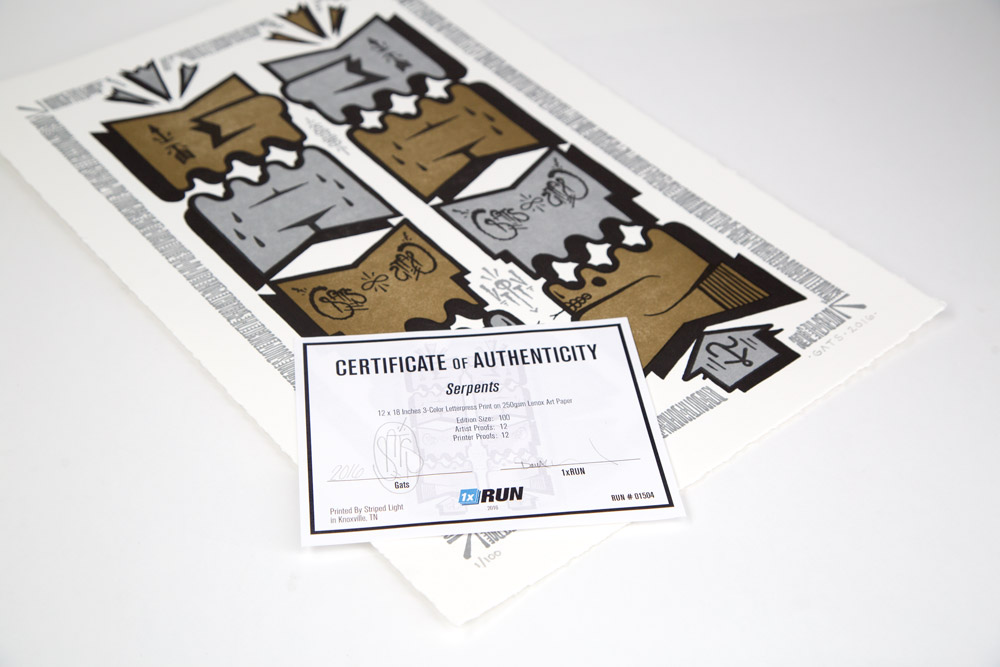 1xRUN: What is unique about this piece?
Gats: This is the first print I’ve done of trucks and the first I’ve had the mask and throwies together. It combines a lot of elements I’ve been playing with individually on the street. It’s also the first ever letterpress piece I’ve released.

1xRUN: Why should people buy this print?
Gats: The vast majority of my work I paint in the streets for everyone to view for free. Sometimes I choose painting over feeding myself. When you buy artwork from me that money goes directly back into creating public artwork. That also means that the majority of my work will be destroyed. This print is a way to preserve a small piece of my greater body of work. 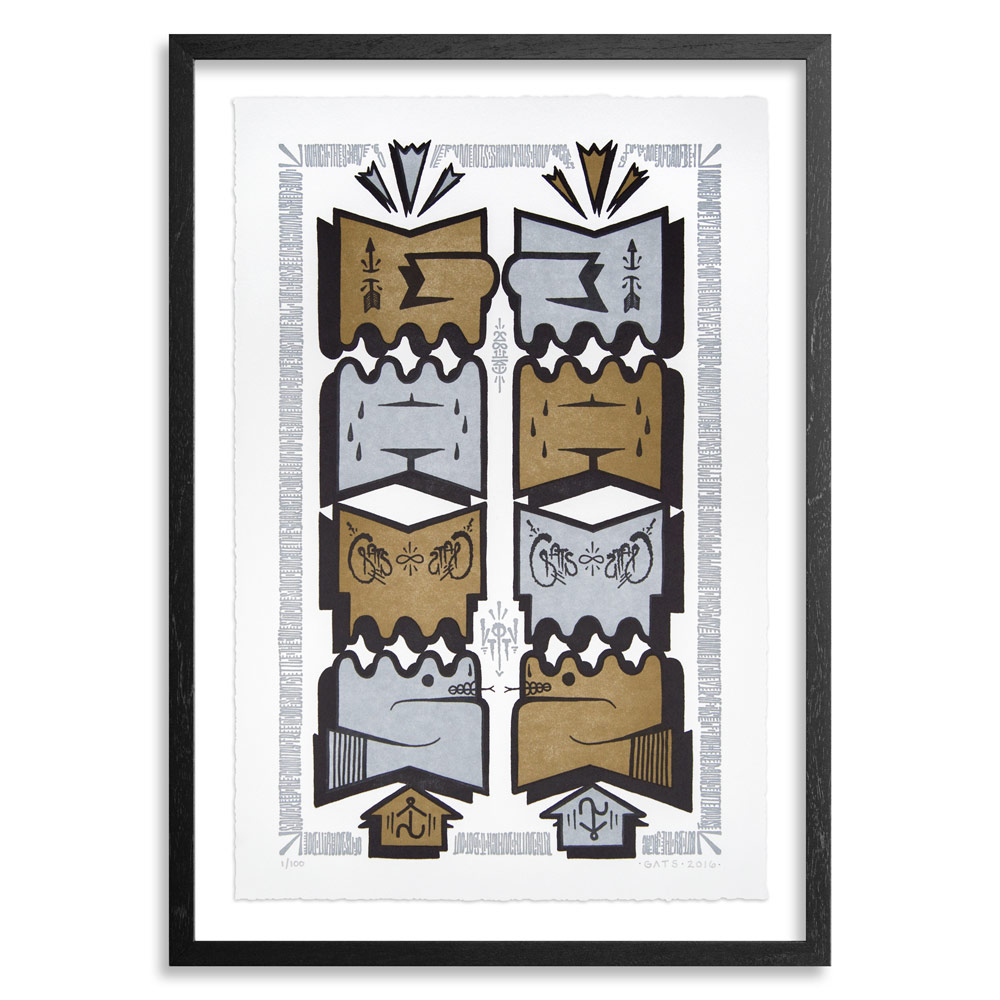 1xRUN: Where else can people find you?
Gats: Flickr – Tumblr