Simply put the story of graffiti in the late 1970s and early 1980s could not be told without photographer Henry Chalfant. At age 75, Chalfant is still a champion of graffiti, showing alongside trendsetting writers he helped document in international showcases like The Bridges of Graffiti at the Venice Biennial. 1xRUN writer and photographer Mike Popso caught up with the legendary photographer & author for a quick off the cuff interview discussing some of his earliest photos, the era’s influential writers and his recent iBooks… 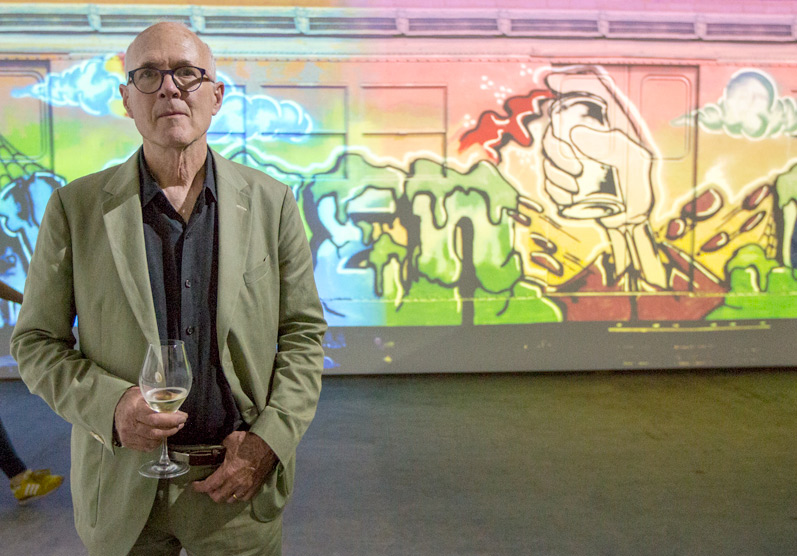 1xRun: Why did you get into photography?
Henry Chalfant: I got into photography in order document graffiti. I was not a photographer and never trained in photography. After I documented graffiti, I pretty much stopped. It’s a very difficult craft. Learning a new career at middle age was quite the task. I enjoy it still, but I mostly take pictures of my family and the occasional mural when I travel. I don’t hunt anymore. During the train graffiti days I was hunting and it was a totally different scene.

1xRun: What camera were you shooting with? Do you still have it?
Chalfant: I shot with a 35mm Nikromat. No idea where it is.  But I had a motor drive SM1 which was revolutionary. I could jump on the platform position myself and see the curve see where the car would pull up. Let the motor do the work so I could make a panorama, you only have 30 seconds to nail it. Almost 90% of the photos were at the station while passengers were exiting and entering. I never shot in the yards or off the line. I suppose because I wasn’t a talented photographer, I was interested in just the graffiti, stitching the photos together later and seeing the whole train.

1xRun: Do you remember the first train you photographed?
Chalfant: I saw trains for years before I photographed them. There was a train that Lee did in 1975 that I caught, called “Heaven Is life, Earth Is Hell” which was fabulous. I wish I had started taking pictures then and there, but I was too busy. When I did finally start to take pictures in my style — which is panorama style —  the first trains I shot were two of Lee’s trains, The “Merry Christmas” by Lee, Mono, & Doc. The two trains were a married couple. Two cars hooked together forever. Usually both train cars were often painted by one artist or an entire crew. That was considered a pretty big deal.

1xRun: Where did you find yourself shooting the most?
Chalfant: Most of the painting took place on a particular line and a particular part of the city. In a train yard very close to their homes they never ventured out too far from where they lived. So I wound up shooting on the 5 and 2 Lines the most. All of the cars in my collection ran on that line, which ran into Manhattan, north of the Bronx and south into Brooklyn. It was considered to be the “King Line” because of the great stretch that it took.

1xRun: Which photos are a few of your favorites in your collection?
Chalfant: All of them! Obviously Seen and Dust took over the 6 Line. Mad was Seen’s brother, who wasn’t a writer, but Seen would often put him up on trains. I enjoy a lot of those photos.

1xRun: So when did you start meeting with writers? Where exactly was the “Writers Bench” located?
Chalfant: Well I shot photos for 3 years before I met any writers. This was in the late 1970’s and I had never seen anyone shooting photos of trains before.  One day I was shooting on the platform and noticed a kid also taking pictures. He told me he wrote Nak. After a few minutes of talking, he told me ,”If you wanted to show your pictures to the writers themselves meet them at the 125th Street station.  Sure enough I went there a few hours later and began a relationship with these guys at what they called “The Writers Bench.” So from there myself and my studio was an outlet for graffiti.

1xRun: Writers frequently came to your studio as a sort of home base to look at photos and chill. Any crazy stories go down in your hallway with artists always coming and going?
Chalfant: Well I was on the first floor. So my neighbors didn’t, for the most part, like what I was doing. The kids would sit on the doorstep and sometimes tenants would have to excuse themselves and they would get hostile. One of my neighbors said “unless you have a social worker degree, you have no business bringing these kids around.”

1xRun: I could imagine some monumental events went down there?
Chalfant: Yeah, I had invited Crazy Legs and Frosty from the Rock Steady Crew to my studio to put on a performance. Frosty said “Henry was stunned!” Nobody downtown had any idea this sub culture was happening. From there I put on some performances with these crews and at the dress rehearsals let’s say there was a “rumble” someone had a gun, but didn’t use it thankfully. There were machetes being pulled out, people running away — including the venue owner, who told me “Henry I don’t have insurance for this shit!” Luckily Tony Silver who was involved in the film business was with me. Tony turned to me and said “I think we have a movie here!” So Style Wars was born out of that event. 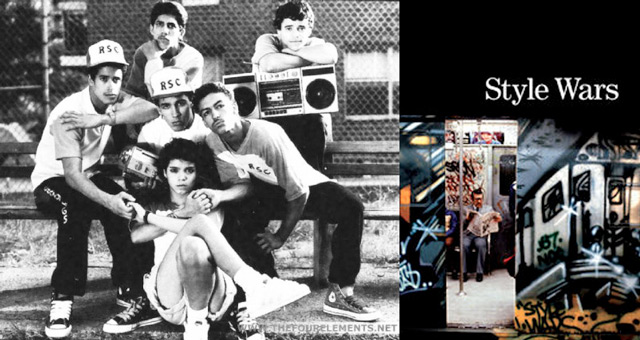 1xRun: What was your role on the film Style Wars?
Chalfant: My title on the film was co-producer. I was just a sculptor before we began officially filming. I knew some b-boys and writers. I didn’t know anything about making films. Tony Silver did.  He was already cutting trailers for large motion pictures at the time.

1xRun: So is that the time you started to met Doze Green and some of the other Bridges of Graffiti artists back in the day?
Chalfant: I met Doze as a member of The Rock Steady Crew before I knew him as an artist. I had put on a performance in 1981 with the whole crew. I didn’t see anyone breaking before that, basically no people downtown had. Doze was an important and big part of the crew with a strong sense of humor. He had a lot of great moves but especially he incorporated his humor into his moves where he insulted the other crew members. It wasn’t until over a year later that I photographed the “Noggin Wiggles” train by Seen (TC5) and Doze (TC5). I said to myself “Oh my God, Doze is a renaissance man. He can probably sing too!” 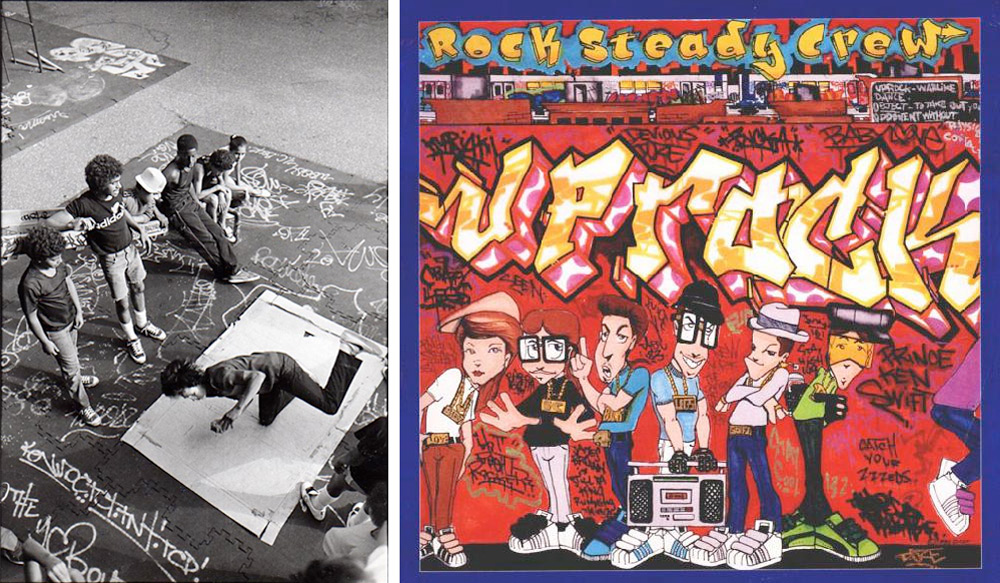 1xRun: So was Doze a major player in the game?
Chalfant: His characters made a very strong impact because he would do flyers as well as trains. Everyone saw the flyers, not just writers. He made a few flyers for us, one in particular at Lincoln Center that had a wonderful character on the flyer. 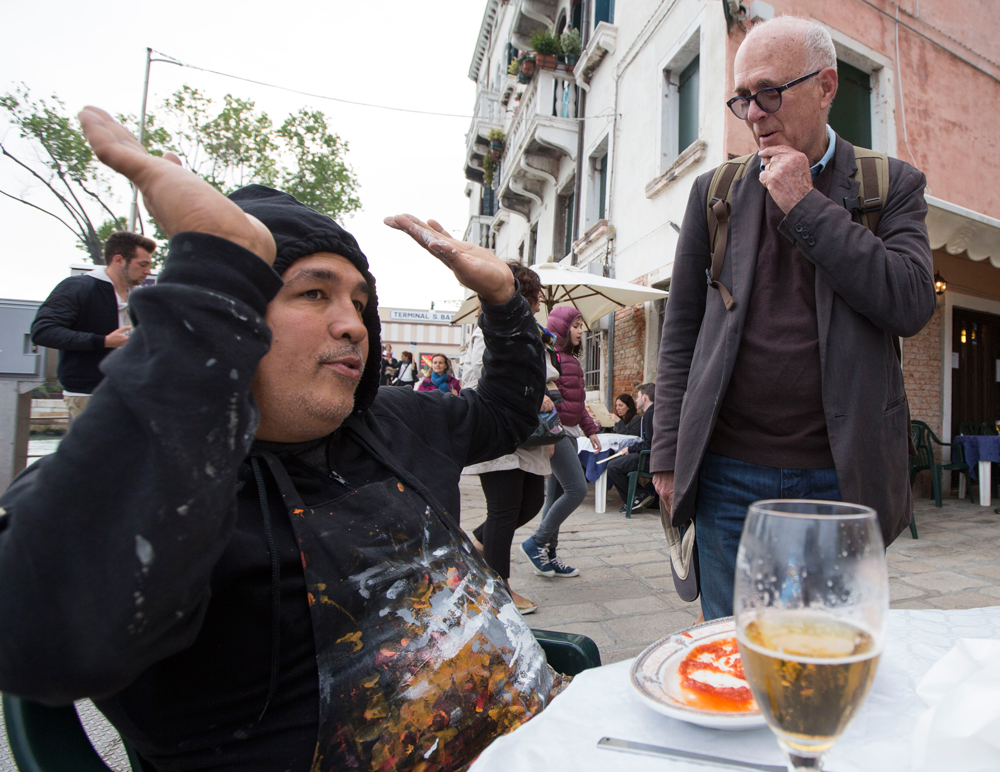 1xRun: Do you feel like most writers began to bite Doze’s characters after those flyers?
Chalfant: I feel they were strongly influenced by him. To this day I forever attribute credit to Doze of parenting many characters in his original work. Many generations even to this day use Doze as a blueprint for many different aspects of work.

1xRun: Out of all of the work Doze has left behind, what do you think has the most impact?
Chalfant: The most impactful work Doze has given us so far is his contemporary paintings. I think they have evolved beautifully over 30 years and you can tell it’s very original and filled with meaning. A spiritual meaning that is worth a lot. 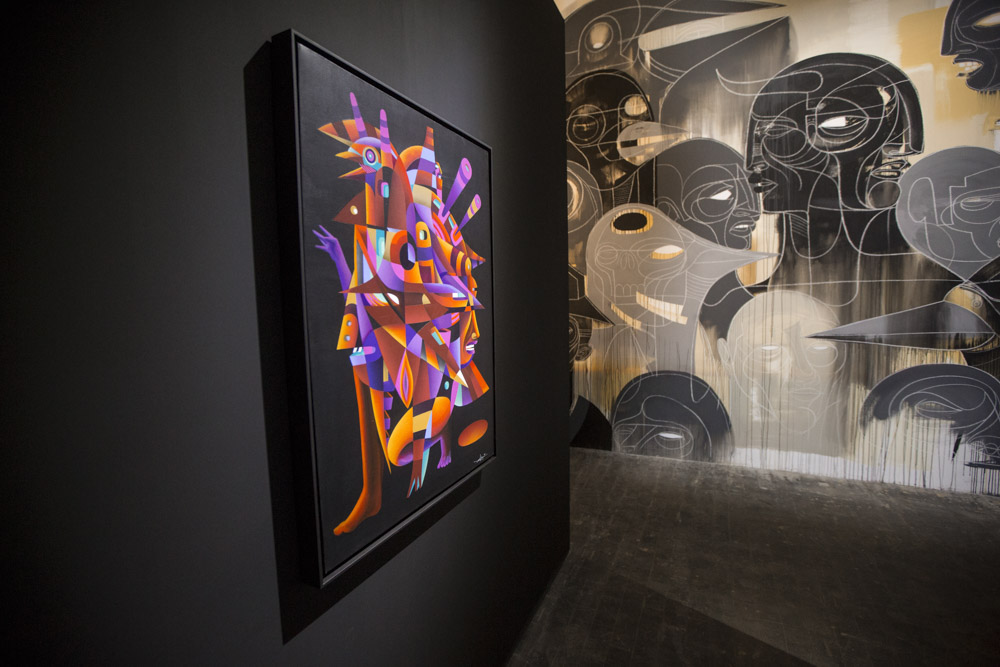 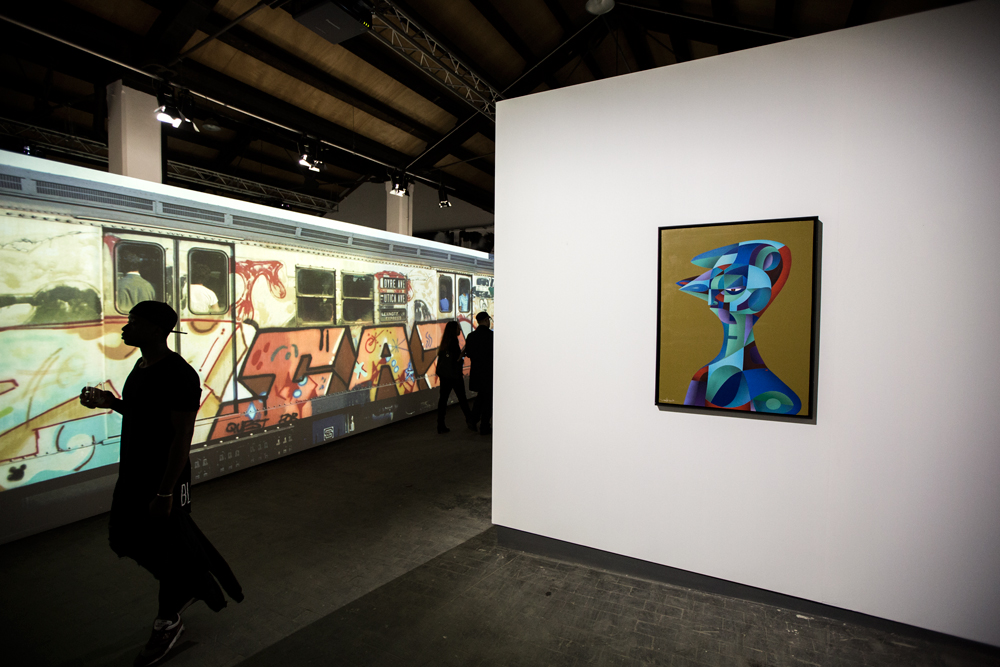 1xRun: Did you have a relationship with Futura or Reas who are also in the show?
Chalfant: I had shot some Futura trains in the mid 1970’s.  He went off to the Navy and came back onto the scene around 1979 or 1980.  There used to be a meeting place with like minded folks that called them selves “The Soul Artists” a sort of intelligent and very open minded crew.  I first met Futura there and we formed a relationship from that day forward. 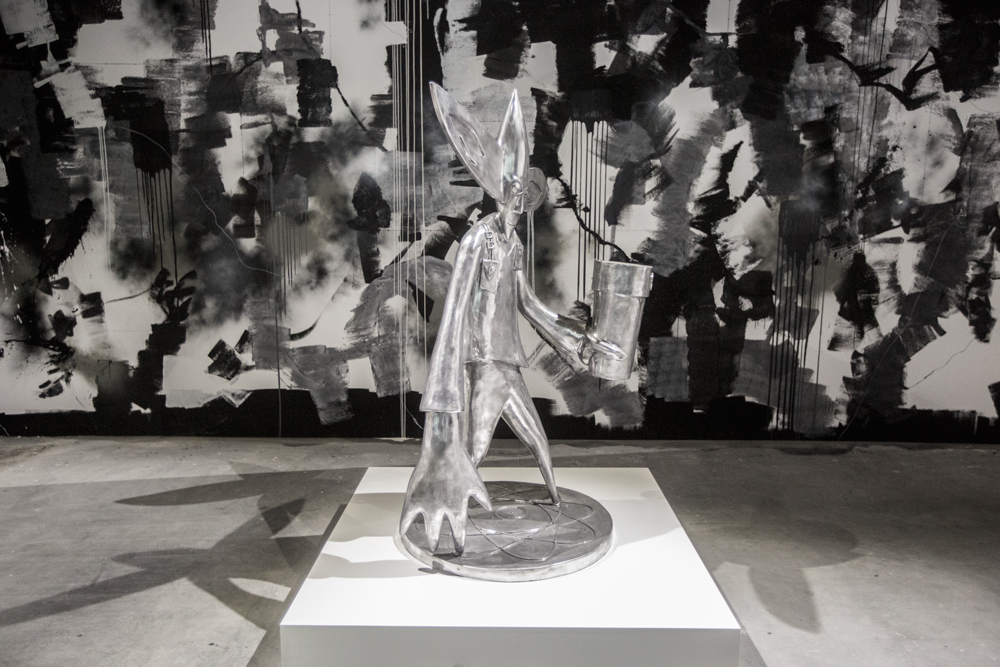 1xRun: What about Todd James?
Chalfant: I knew Todd from a painters gallery in SOHO.  The owner’s son used to write Arson and he asked his dad to do a show with some local writers.  Todd James wrote Blight at the time, which was an apt name for him due to his scruffy long hair. That’s where I was first exposed to him and his work. 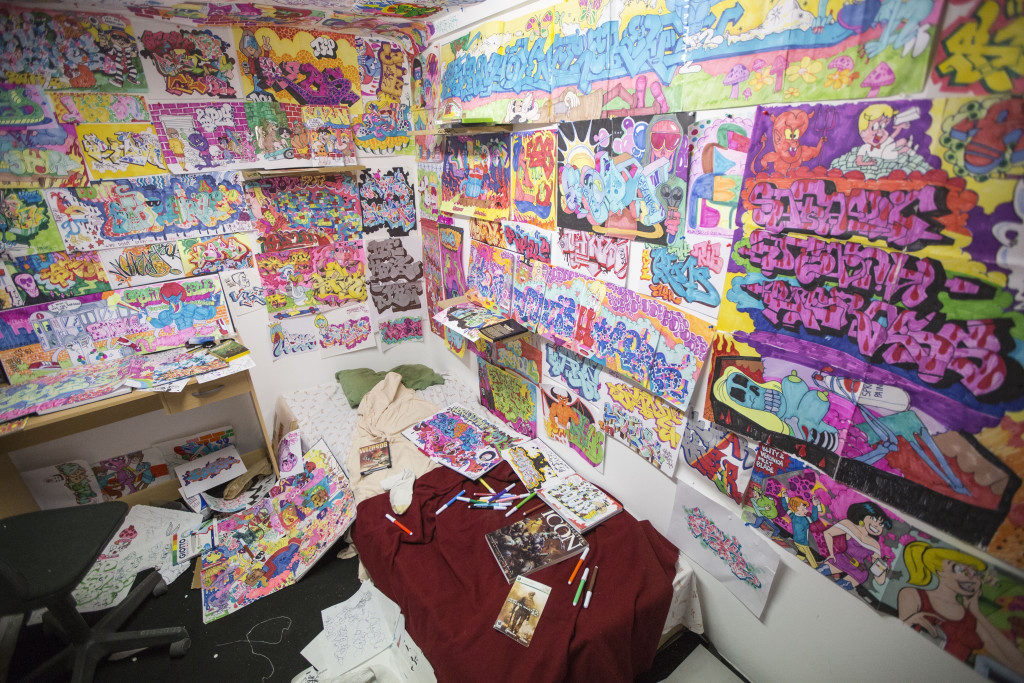 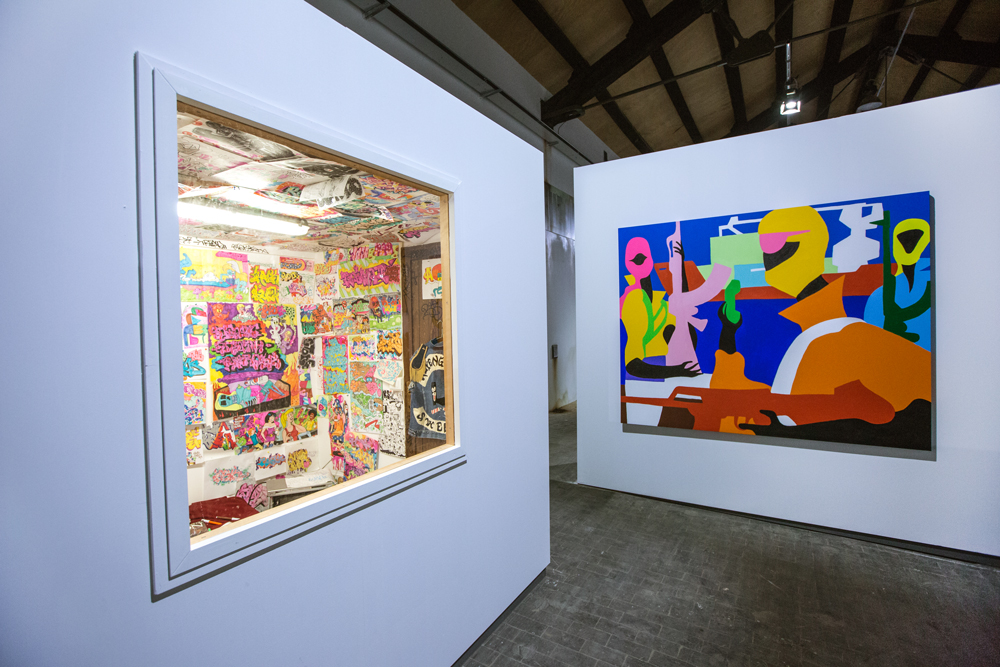 1xRun: Tell me about the new iBooks. Are those your total archives?
Chalfant: Yes. You can see the books split up into series by crews for now. There’s over 800 train photos and I’m splitting them up 100 trains at a time. 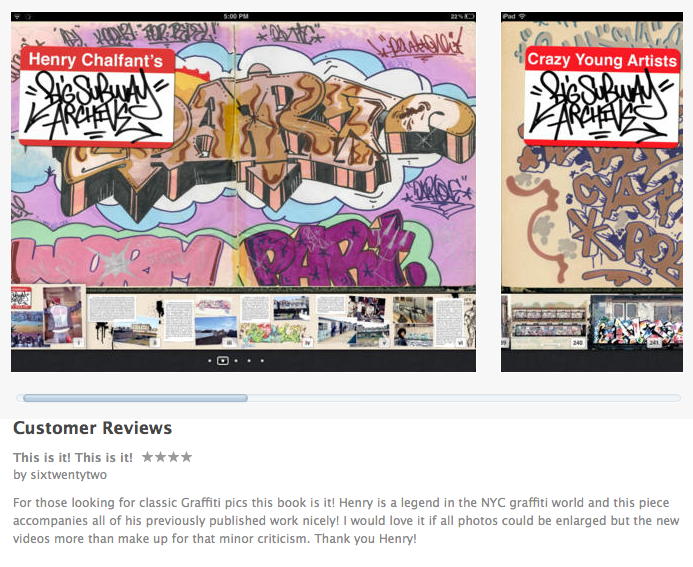 1xRun: Now here we are 30 years later at The Bridges of Graffiti show in Venice, Italy.
Chalfant: I’m happy they included me and my work. 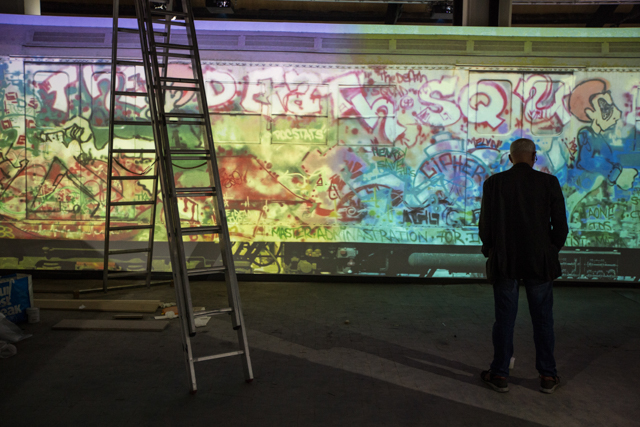 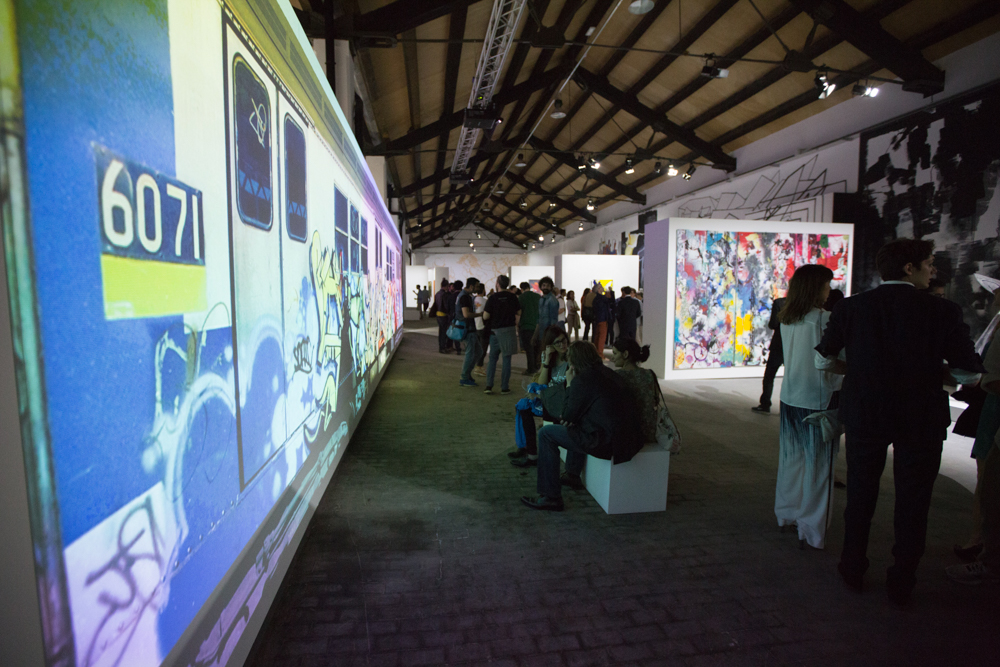 You can purchase Henry’s new iBooks here. See more coverage of The Bridges of Graffiti on the 1xNEWS feed here. 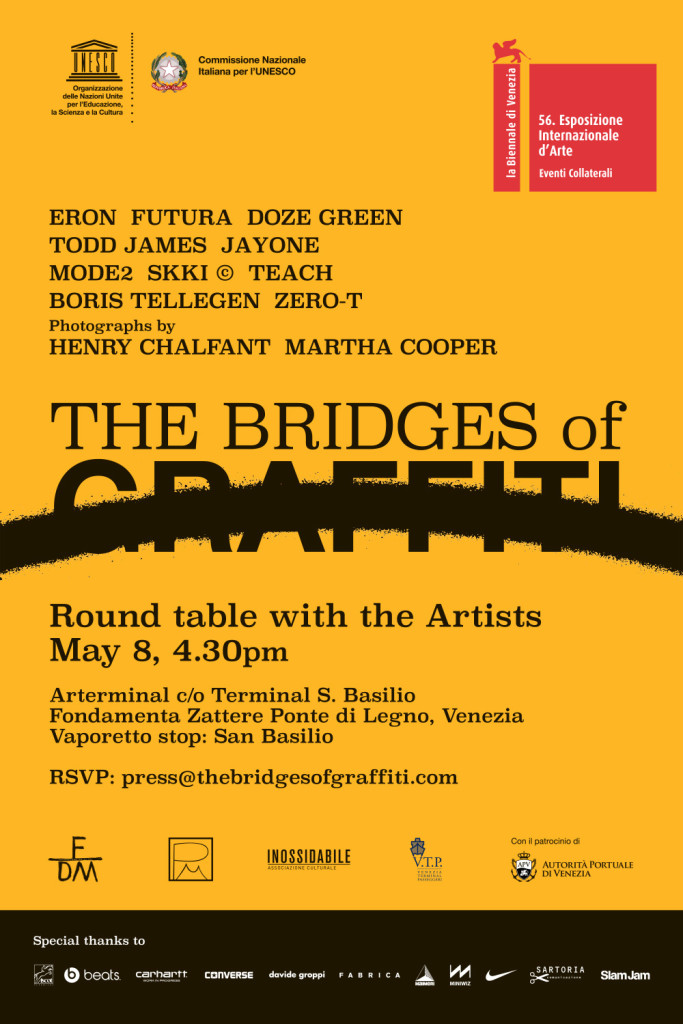 Words and installation photos by 1xRUN writer and photographer Mike Popso. He followed The Bridges of Graffiti at this year’s Venice Biennial, you can check out more of 1xRUN’s coverage here. You can also follow him at @mrpopso84.

Additional photos by Henry Chalfant. You can follow him @henrychalfant.