1xRUN is proud to welcome legendary photographer Dennis Morris, who joins us as we celebrate Bob Marley’s birthday with his debut RUN Babylon By Bus featuring one of the very first (of many) iconic photos that Morris would take of the reggae superstar before he would prematurely pass away at the age of 36. Taken as Marley was set to begin his first ever tour of England, the photo captures a quiet moment between Morris and Marley in the band’s small tour van. Read on as Dennis Morris gives us the story behind this historic image, how it changed his photography career and much more . . . 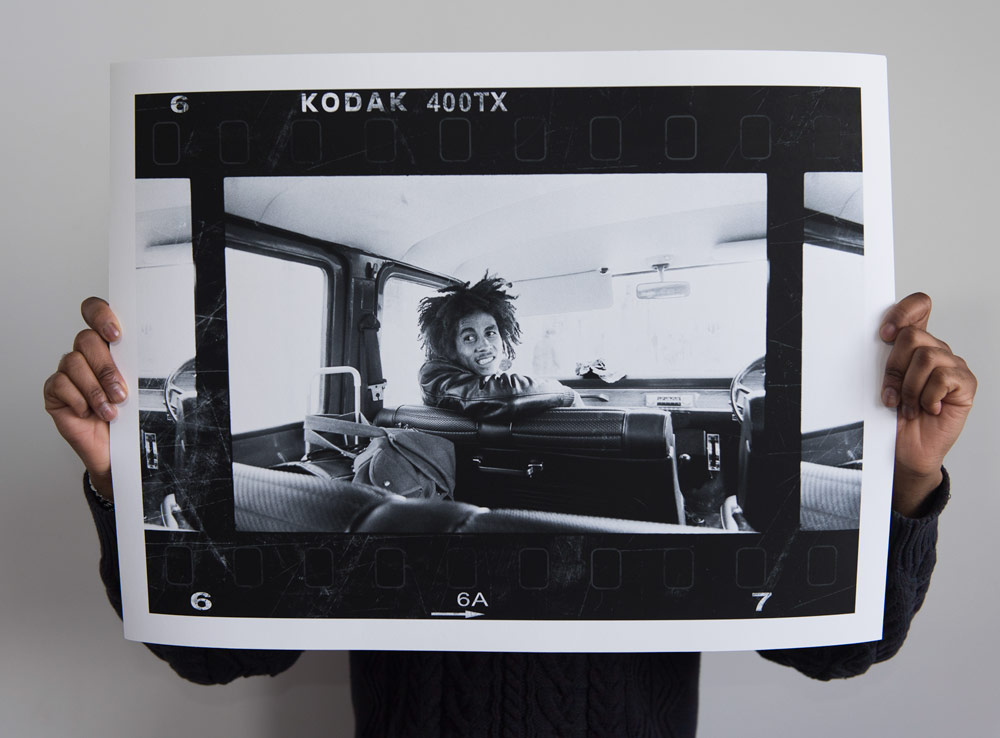 Babylon By Bus by Dennis Morris – Click To Purchase

1xRUN: Tell us a little bit about this photo, anything immediate you would like us to highlight about this image?
Dennis Morris: This is actually one of the first photos I took of him (Bob Marley.) What happened was that I had met him, and he had told me about that tour that he was doing, and asked me if I would like to come along. I said yea. So I met him and we went to his hotel, and in those days they didn’t have a tour bus, it’s what you’d call a transit van.  Basically the shot is when he turned around to me, because he’s in the front row, and he says “You ready Dennis?” and I went *click* “yea.” and so the adventure began. With that picture.

1x: So this was headed from airport to the hotel for the first show?
Morris:  Yea, this was leaving from the hotel, they were basically starting the first tour of England at the time. 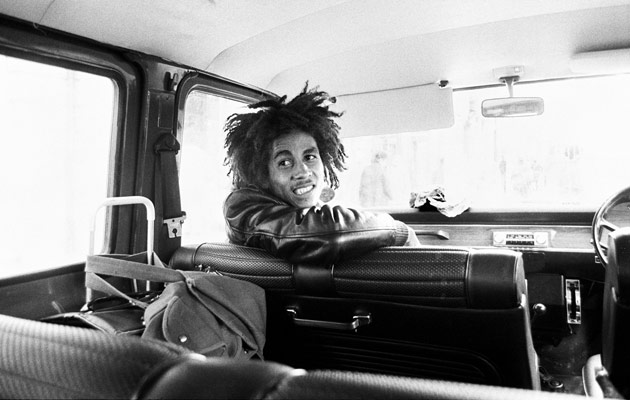 1x: What time of day was this shot?
Morris:  I turned up quite early and just waited. Most bands do their soundcheck from around 4-5 o’clock, something like that.

1x: Were you still in school during this time? (Ed. Note: May, 1973.)
Morris:  It was during my last year of school. I had read that he was coming over to do his tour. I basically didn’t go to school that day, and I went to the venue that they were supposed to be playing. A venue called The Speakeasy Club. It was the kind of a club where all the rock fraternity would hang out. Anybody from Rod Stewart to Mick Jagger to whatever to whoever, that was the place that they would go. Basically what was happening was, the record company Island Records, was trying to break into the rock circle. So that’s why they put him in to play that club, to highlight him to the rock hierarchy as such. 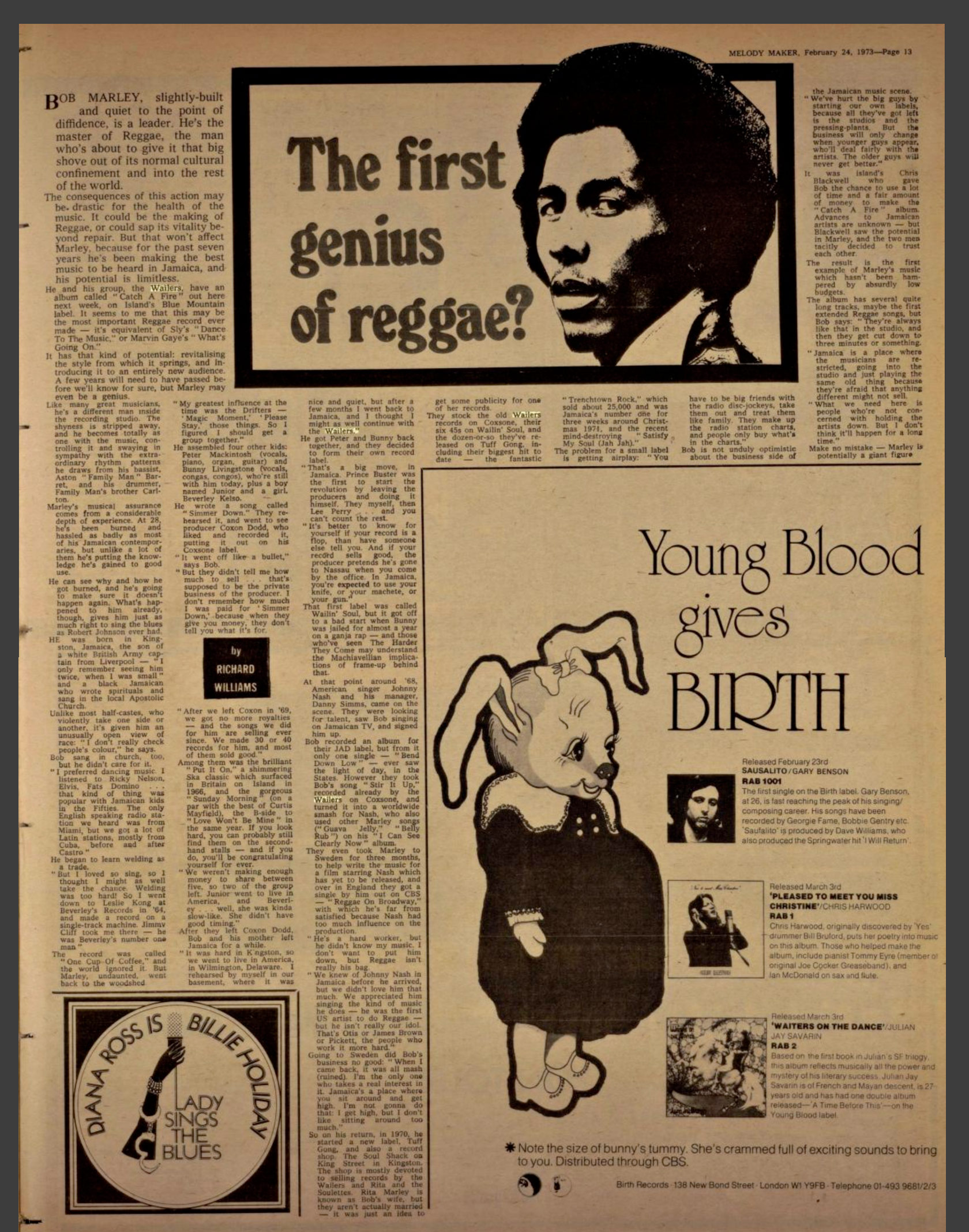 1x: What was the incarnation of the band that was with Bob for these shows?
Morris:  At the time he was still with Peter Tosh and Bunny Wailer, and the backing band was Family Man (Aston Barrett) on bass, Carlton (Barrett) drums and Earl “Wire” Lindo on keyboards. At that point the “I Threes” (Judy Mowatt, Marcia Griffiths, and Marley’s wife, Rita) were not with them yet. Basically the “I Threes” replaced the harmonies of Peter and Bunny when they left.

1x: What is unique about this photo compared with your other work?
Morris:  All my shots of Marley are very unique, because I had a very special relationship with him. That’s why my shots are so much in demand. They’re the shots that are in museums and private collections. This particular picture was the beginning of my working relationship with him, that’s when it all started for me. 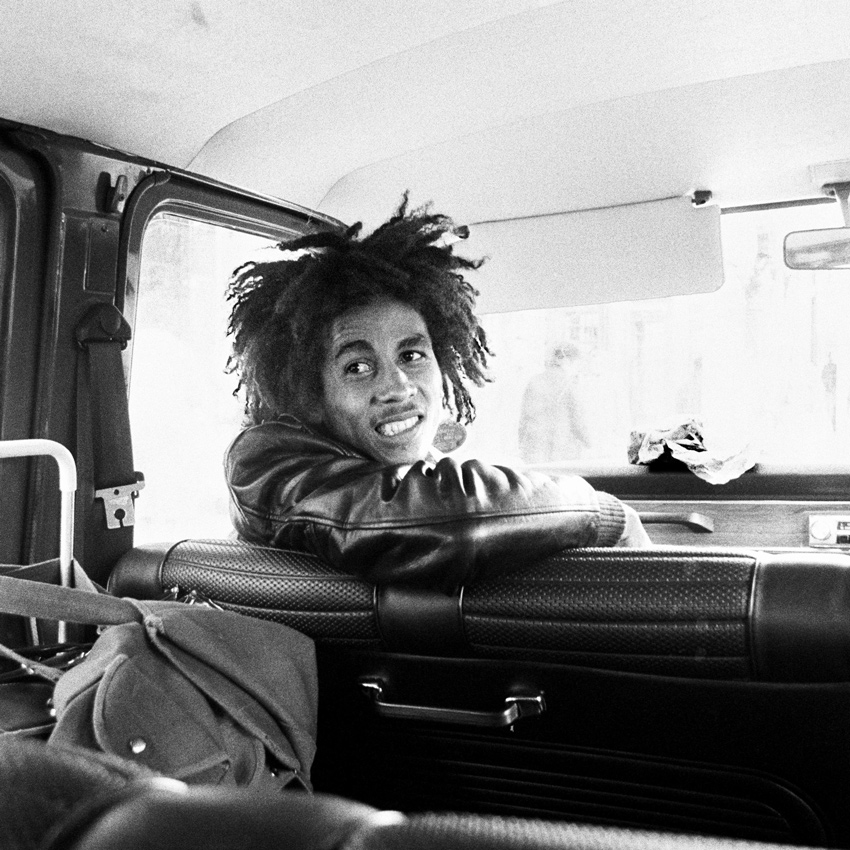 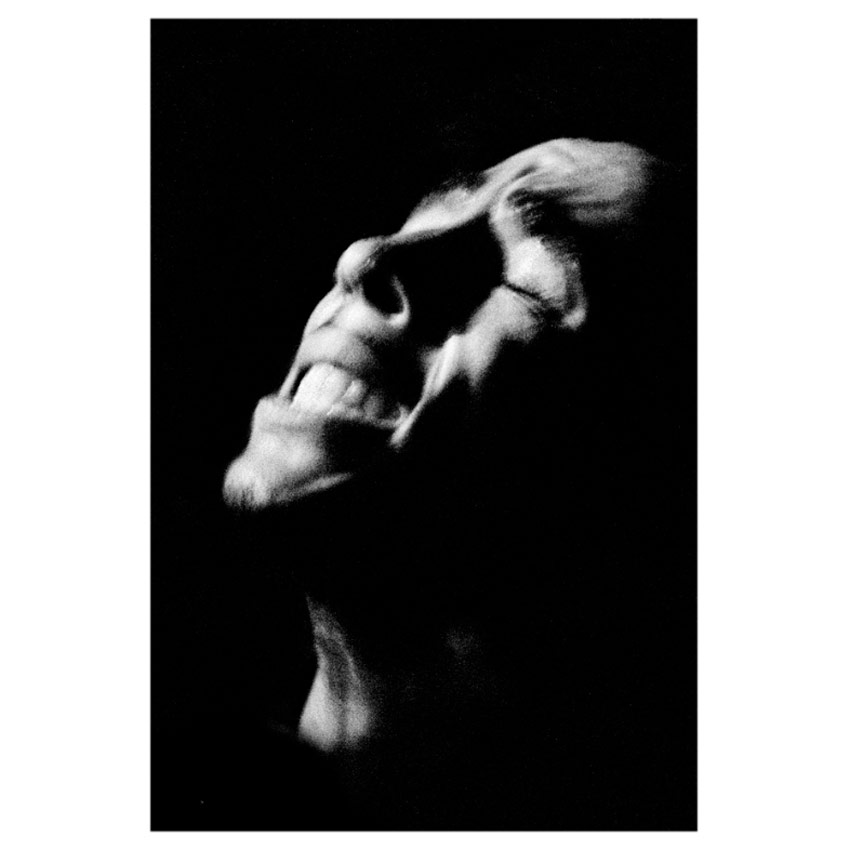 1x: So you mentioned that you weren’t very much into rock photography at the time, were you doing other things and just going to these shows on the side? How did it all come together?
Morris:  The tour was in the winter, and they had never experienced winter before. So what happened was that after about 6 days or so basically Peter Tosh and Bunny Wailer didn’t want to continue the tour because it was too cold for them. They didn’t like the food. So that was tough for them. Everything had to be Ital food, and Ital is basically like vegan. Obviously in those days nothing like that really existed. So basically Peter Tosh and Bunny Wailer said “well we don’t want to this anymore” and went back to Jamaica. After that the tour collapsed.

1x: How many shows did they play on that tour before it ended early?
Morris:  Six or seven. They had been together for a long time before that, but that was basically their first tour of England. So they came over, and it was a very hard winter. Peter and Bunnie didn’t really like touring at that point, so they had a big argument and they decided to go back to Jamaica. So they went back. That was the end of that. They didn’t really want to continue touring like that anymore. 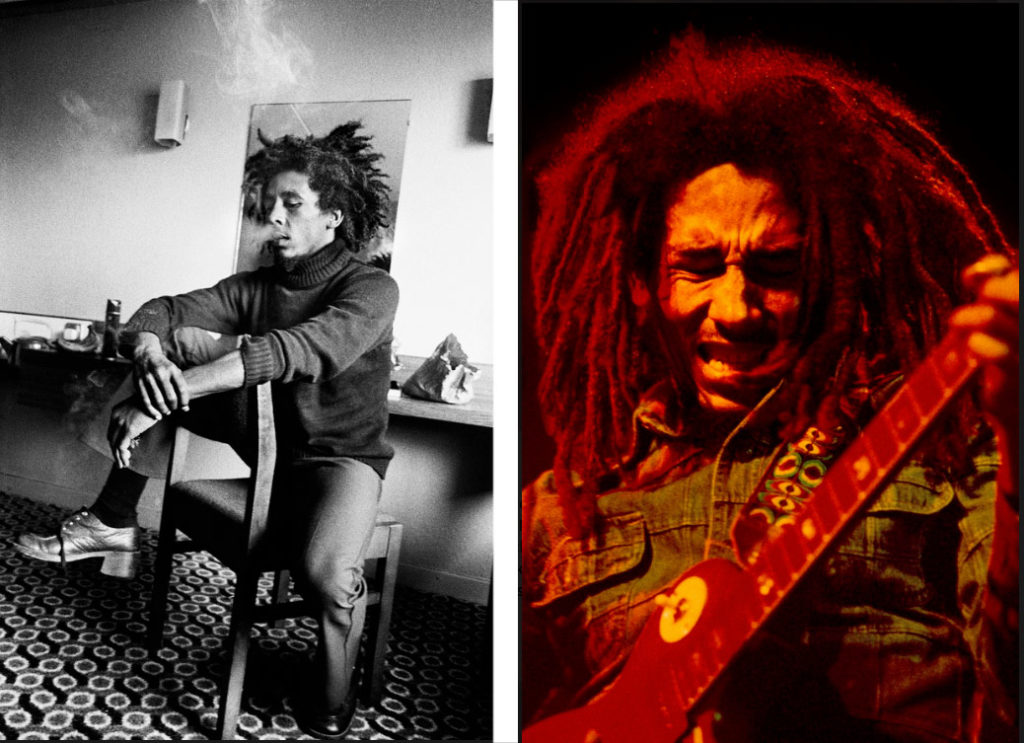 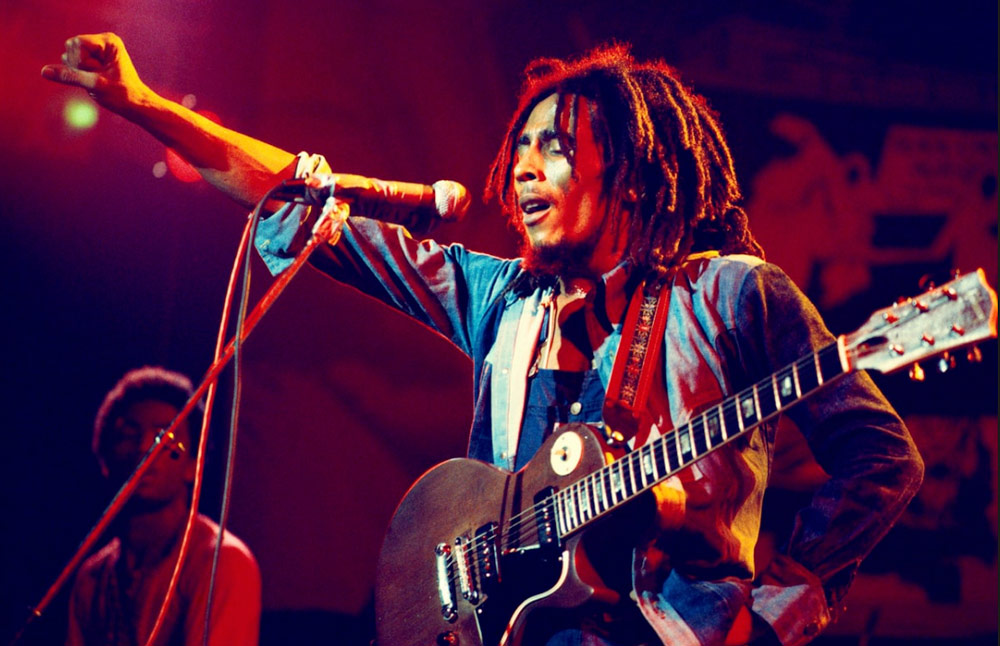 1x: So were you reading all these magazines at the time as a fan?
Morris:  Yea, I was obsessive about photography and music. I was always buying those magazines.

1x: Yea, I’ve definitely heard of that venue and that specific Lyceum show fairly historic.
Morris:  I’ve also got the cover photo for the live album that put out later.

1x: Do you want to talk about any difference in how you approach some of these live shots vs.  your more “candid” shots?
Morris: Not really. No. To me photography is a bit like art. Like being a painter. You either have it or you don’t have it.

1x: Right, but you’re not staging any of these photos. It’s all natural shots.
Morris:  Right, if you understand the approach of reportage, everything that I’ve ever taken of Bob Marley or the Sex Pistols,  they were all taken by available light, as they were, where we were. None of it was taken inside of a photo studio. They look like they were, but they weren’t. That’s how reportage works. It’s like a study of your subject. The technique is to take away the mask and go beyond what this projected self is. Get their inner self.

1x: Yea, you seem to have both, a nice collection of live shots, as well as these more candid moments, did you have a preference of one over the other?
Morris:  Live photography for me…I like it. Well, I don’t like it anymore unless I’ve got a close personal relationship with the band. Now they only let you do I think three songs. There’s no way to do anything with that. Back in the day once you had your photo pass you were the from the beginning to the end. Realistically what you were trying to do, if you were doing a live thing, was to capture that defining moment of he/she/their live performance.

1x: Anything else about that photo that you’d like to add?
Morris:  This is a very special photograph. It’s a very important photograph for me. It’s one of the first images I took of him. 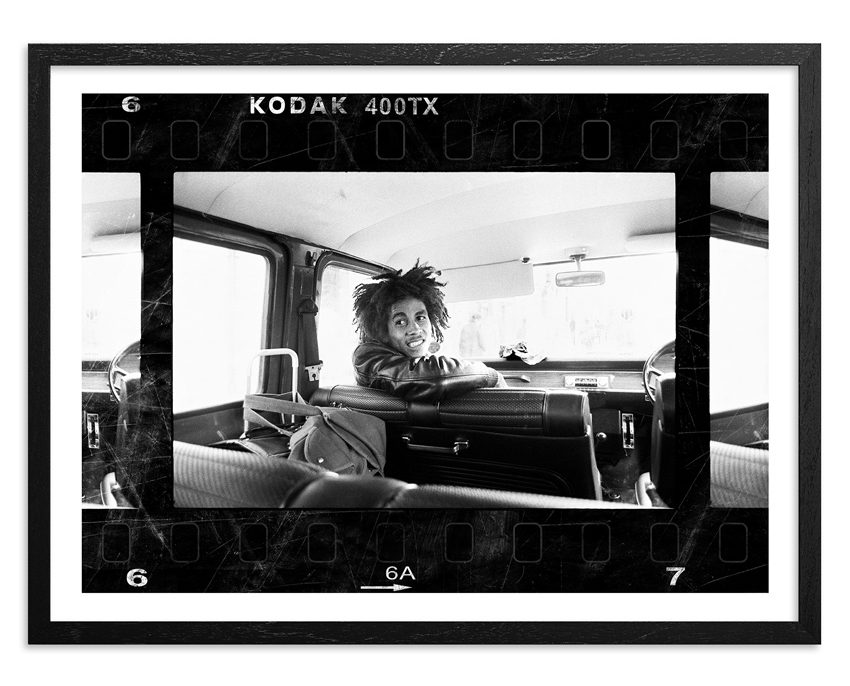 Babylon By Van by Dennis Morris – Click To Purchase