We caught up with POW! WOW! C0-Lead Director Kamea Hadar to discuss his latest release Kaka’ako Dreams which (alongside fellow Hawaiian artist Defer) kicks off this year’s POW! WOW! Hawaii 2016 print series! The canvas for Kaka’ako dreams was painted earlier this year, but the inspiration stems from Hadar’s collaborative mural with Australian artist Rone back at POW! WOW! 2013. Read on as Kamea discusses the life-changing mural, latest release Kaka’ako Dreams and more… 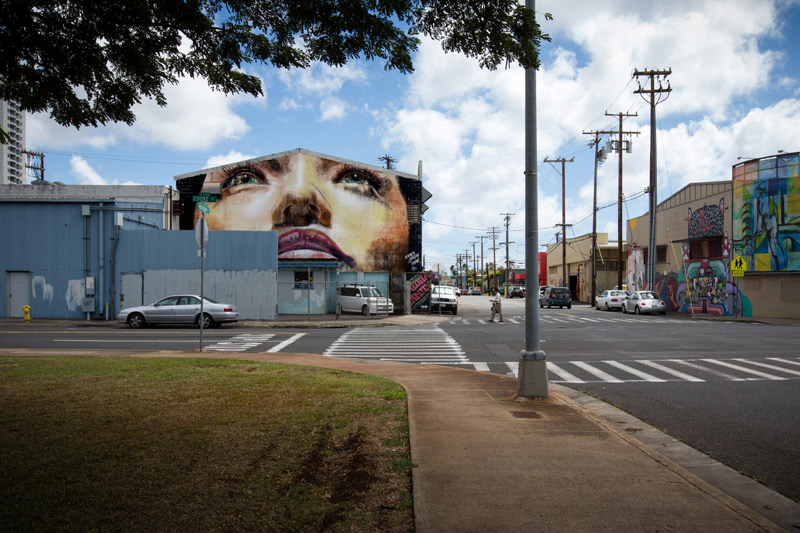 1xRUN: Tell us a little bit about this piece, anything immediate you would like us to highlight?
Kamea Hadar: The canvas piece that this print is from is based off of a wall that was a life changing mural for me.

1x: Was this piece part of a recent theme or series for you?
Kamea Hadar: This piece represents a life changing mural for me. It was the first time that I first started going bigger and bigger mural wise. Rone taught me a lot, when we worked on this mural he was just starting to teach me a lot about his techniques. It was one of those experiences where there was no ego involved. He would start a brush stroke a the top of the ladder and then pass it down to me and I would finish it off. It rarely comes together that perfectly. The way the image fit the building. Everything about it was a strong piece. Not to mention when we finished it, it started to drizzle and there was a perfect rainbow above it. We had a shot of the mural looking to the sky at this perfect rainbow. It was a magic moment.

So that’s one theme. It was life changing for me. It wasn’t the beginning of POW! WOW!, but it was really when POW! WOW! began to blossom, and my own mural making began to blossom for me. It also represents the changes that Kaka’ako has experienced since then. The landscape is completely different now. Most of the ways that it’s going is going up. Old buildings are going down and new high rises are going up, and it’s getting too tall for the people that have been there for so many years, making it kind of unattainable for many of the people that have lived there. The original mural is located next to Mother Waldron Park, which has a large homeless population that lives there, and it’s probably not too long before they become displaced. 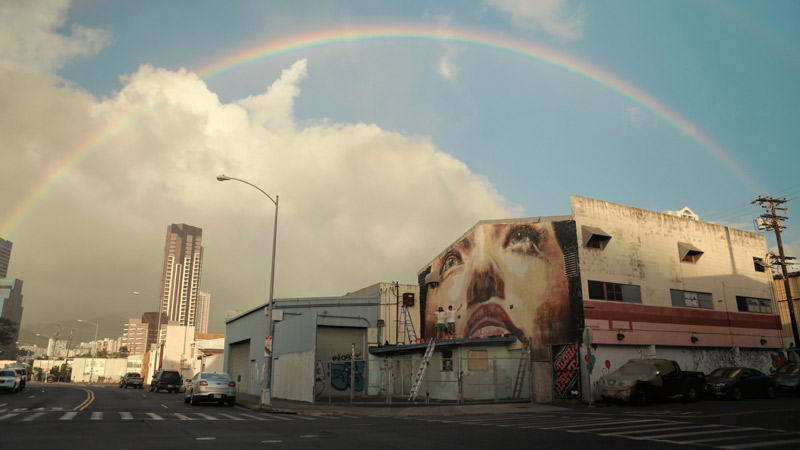 1x: What materials were used to create this piece?
Kamea Hadar: House paint. Just regular house paint. That’s another beauty of it. There was no special paint. What makes something special is not any specific materials. Those are easily accessible. It’s just the way that it came together. Not to mention it’s an image of my wife and it’s become an icon of Kaka’ako.

1x: When was the piece originally drawn and created?
Kamea Hadar: The mural was done in February of 2013.  The canvas I just painted this year.

1x: Tell us a little bit about your process and how the idea and execution came about?
Kamea Hadar: Basically I wanted to paint my wife, and Rone and I were talking about who to paint and we thought to paint her. I had a few reference shots and ideas, and thought some of them might work, especially one of her looking up, because it fit the apex of the building. I remember saying, “Ok, yea let’s get her head and do a bust.” Then Rone said, “No. Let’s just do the whole thing her face.” That was the way he was thinking, and he showed me how to think that way, and just think big. If you have this wall why not maximize it, and do a huge face, instead of having all of this unused space, just keep everything as big and mind blowing as possible. 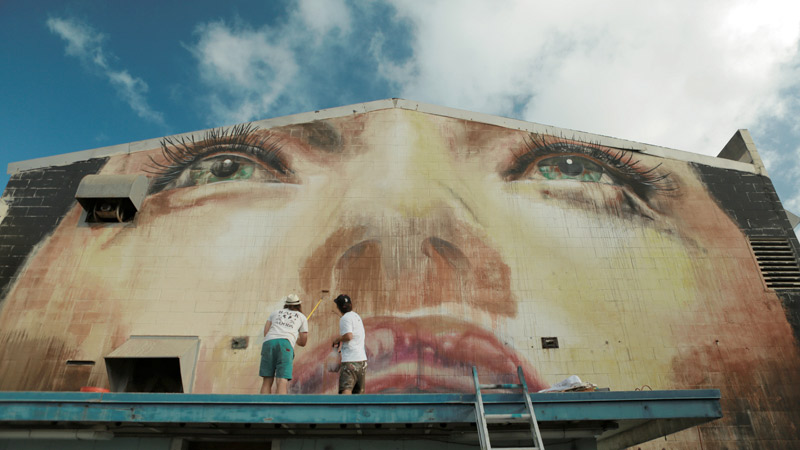 1x: How long did this piece take from start to finish?
Kamea Hadar: It took about 3 days.

1x: What do you feel is unique about this piece compared to your other work?
Kamea Hadar: The meaning a nd experience behind it. visually because it was one for the first strong pieces from me some of my recent work comes in that same vein. 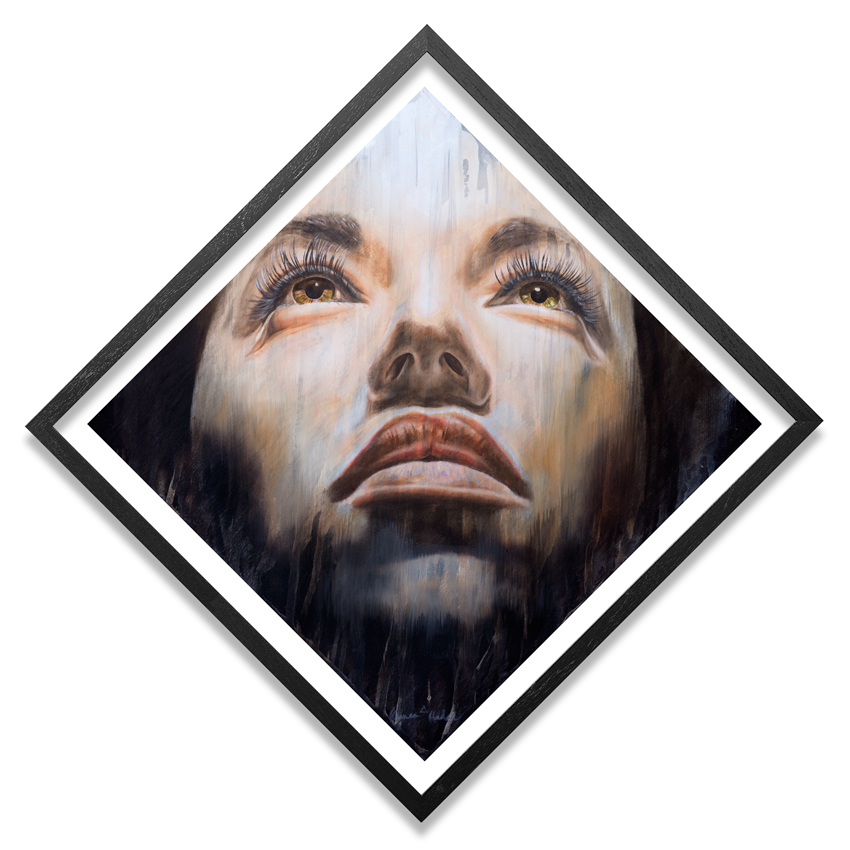 1x: What are your expectation this year for POW!WOW! Hawaii?
Kamea Hadar: I’m expecting it to be one of the funnest ones ever. The crew is not quite as big, so it’s a bit more manageable. It was getting so big that it felt like it was caving in on itself. You can’t talk to 75 people at a dinner. You can maybe talk to 10. There is a big difference between a group of 30 vs. 125. It’s more manageable as an organizer and an artist. Also, everybody will be in town so there won’t be as much driving. We’re also getting better and better at organizing. There’s a lot of really fun events. The week is a little bit shorter, it’s more dense, efficient and fun. I’m expecting it to be one of the most fun POW! WOW!s. I think that will show in the work as well.

1x: Without giving away too much, what are your plans for your mural out in Honolulu?
Kamea Hadar: I actually have already painted a mural at the Modern Hotel for POW! WOW! so that is the first POW! WOW! mural for 2016. If I have time I may do a small wall, but I am going to talk to Rone about doing some touch ups to our wall. It’s getting a little bit faded and it needs a little bit of touching up.

1x: What’s your schedule like after POW!WOW! 2016? Any big shows or events coming up that you’d like to share?
Kamea Hadar: I have a few projects, but we’ll be focusing on POW! WOW!s this year. I’ll have some personal projects this year, but I will be having my first baby in June. 2015 was the year of yes for me. I went on 27 trips all over the world, I am platinum status on too many airlines. I didn’t really unpack, I just kept a bag packed. I saw how much it affected me, and how much it affected by family. I was so grouchy and uninspired and I wasn’t enjoying it, and it is something that should be enjoyed. It’s probably the best job in the world and I wasn’t appreciating it, and I thought this life is wasted on me if I’m not happy, so I realized you have to balance this with a life at home. This year I’m already happier, eating better, exercising and spending more time at home. Now when I travel, I’ll appreciate it more instead of it being a drag. 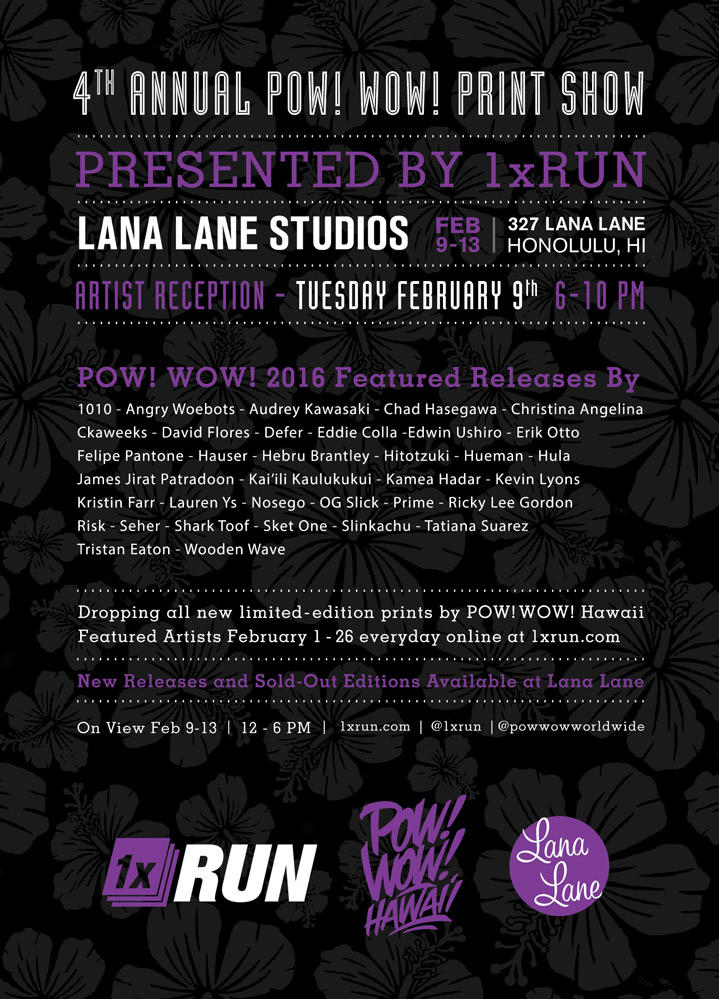