Newcastle duo Prefab77 came to Detroit ready to throwdown with 1xRUN’s Master Printer Jonny Alexander creating a slew of hand-painted multiples, embellished screen prints and original artwork for their upcoming pop-up exhibition Unmasked.  After being influenced by New York City street art in the late 90s, Peter Manning and Marc Ross returned to England to help spread the word of the burgeoning street art movement. As creatives starting their own gallery they showcased early works by Banksy, WK Interact and more from the Prints On Walls artist stable, before breaking out on their own to form Prefab77. Since then the two have been telling bright and vivid stories that mix medieval iconography with punk rock cut and paste aesthetics for their own unique style. We caught up with Manning and Ross to discuss their latest exhibition, their background and more. Read on to get a behind the scenes look at Unmasked… 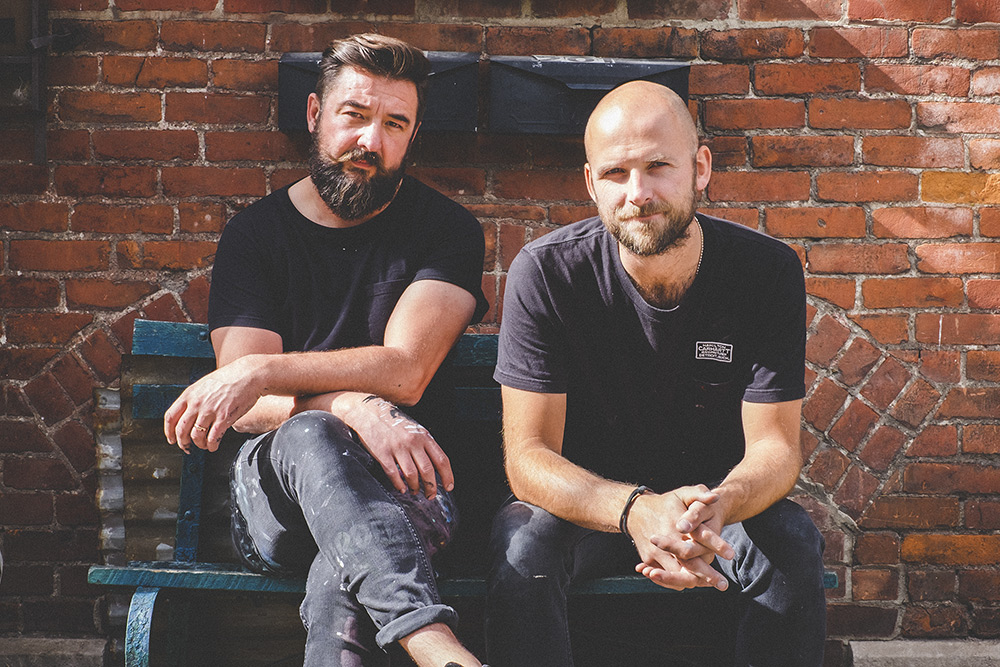 1xRUN: You have both spent the last two weeks here at the 1xRUN Residency making work for your pop up exhibition Unmasked, give us a little background on this series?
Peter Manning: This whole series started a little bit different, but it’s still got the same elements that we’ve always done. We always tell a story, whether it’s political, fashion, music or history. What we’ve switched to with these totems, it’s a case of figuring out a concept and a medium that is scalea-ble. The whole thing for us now is telling it in a small scale or a big scale. You either do it small, as these little totems, or tall on a building, which is what the next step for us will be. The story could be anything. It could be the history of a city, a struggle, a person or a movement. With this medium we can have the ability to do that. We want to tell compelling stories that could be a sad, poignant or serious story but could encapsulated in these figures. 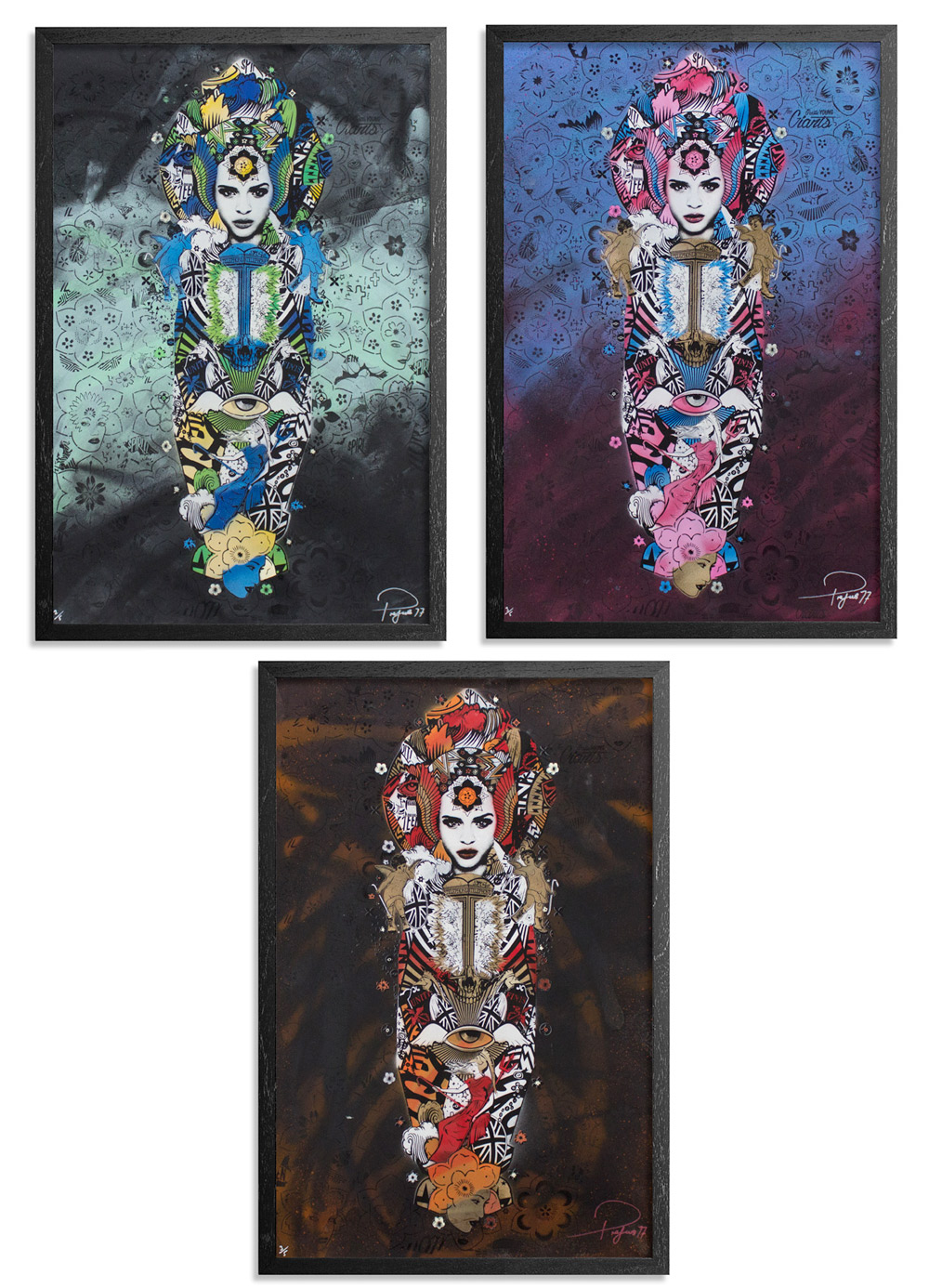 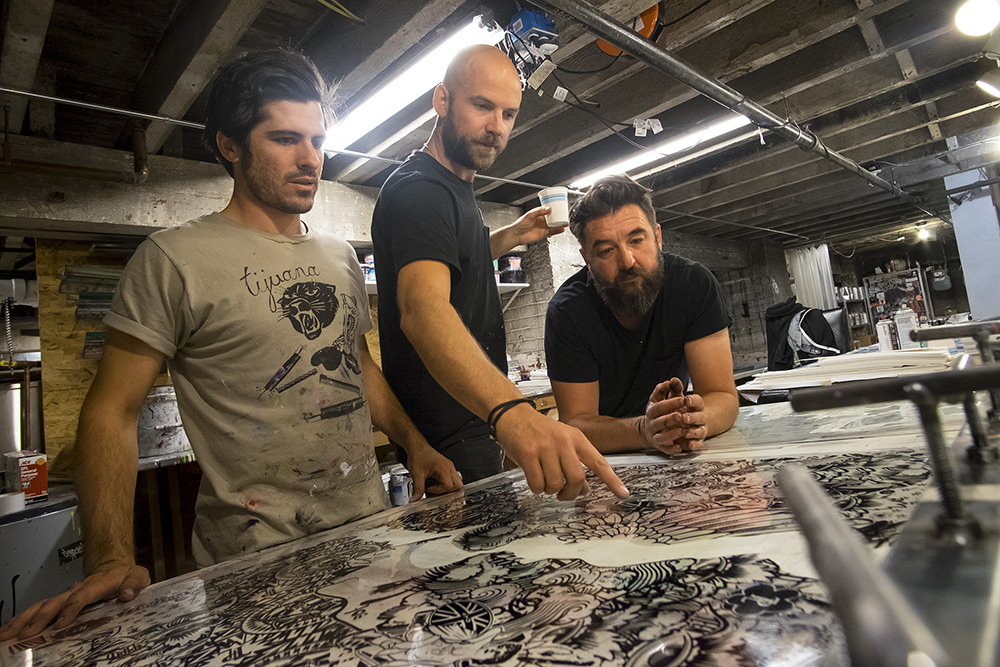 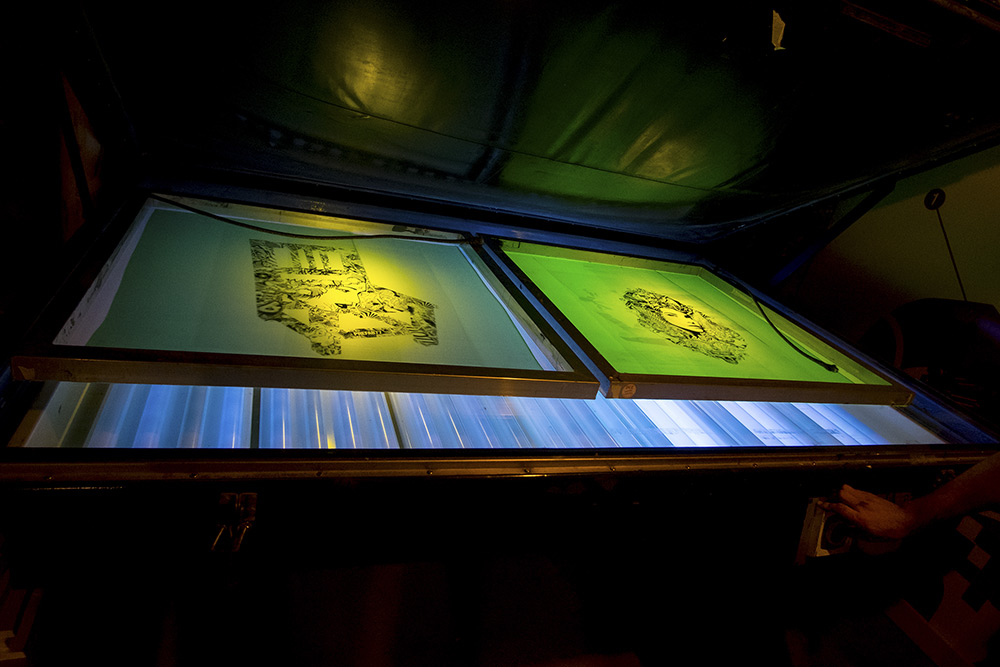 People love to tell stories and love to hear stories. I think that’s what everyone does whether it’s movies, advertising, songs or poetry. When you write a song you’re telling a story. It’s a human condition. If you took everything away, you would be around the campfire telling stories. Medieval art tells the story of religion. Renaissance art has hidden allegories. Russian art tells a political story and punk posters tell the story from the dispossessed. We’ve pulled all these references together to create all these figures. 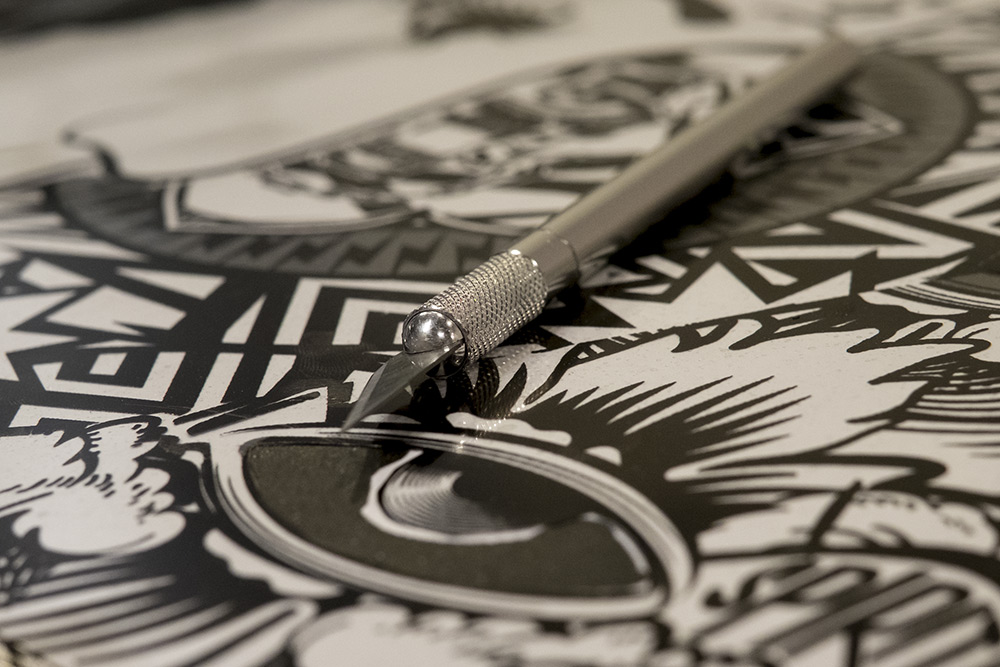 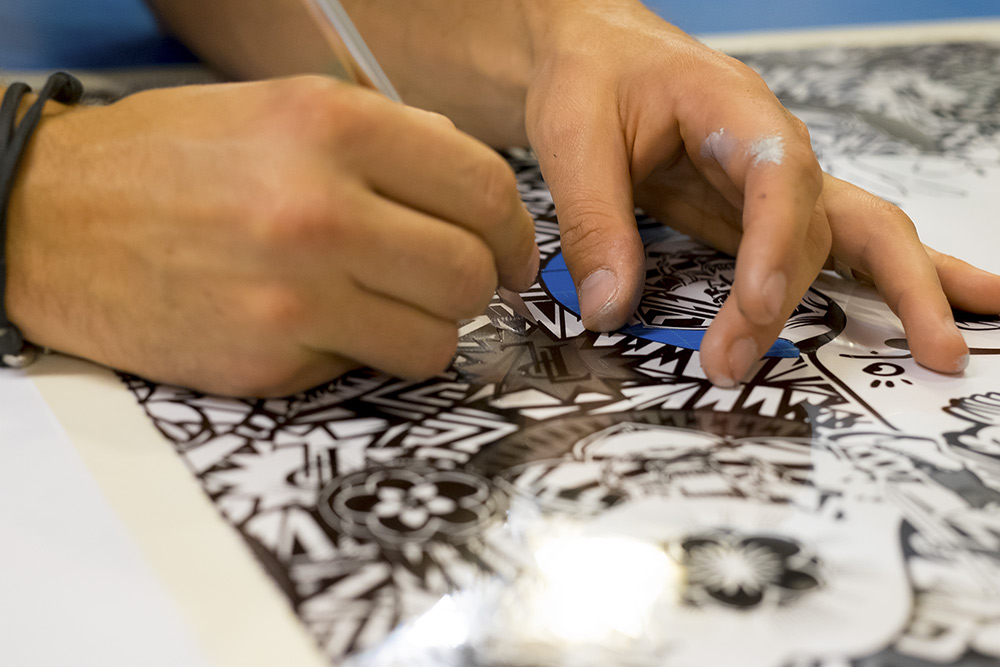 1x: Let’s talk about some of the iconography in these pieces.
Manning: This is all of our loves. Fashion, politics, music and history. We look at these and I think of church windows. These are figures that tell a story and characters that are woven in there. It’s kind of historical, but it’s very much up to date. Instead of telling the story religion we’re telling the story of some of the things we like. Because we’re British, for us it’s telling the story of how we view Britain. The figures are a bit of a mish-mash, but overall they are the personification of Britannia and all of the stories woven in between. 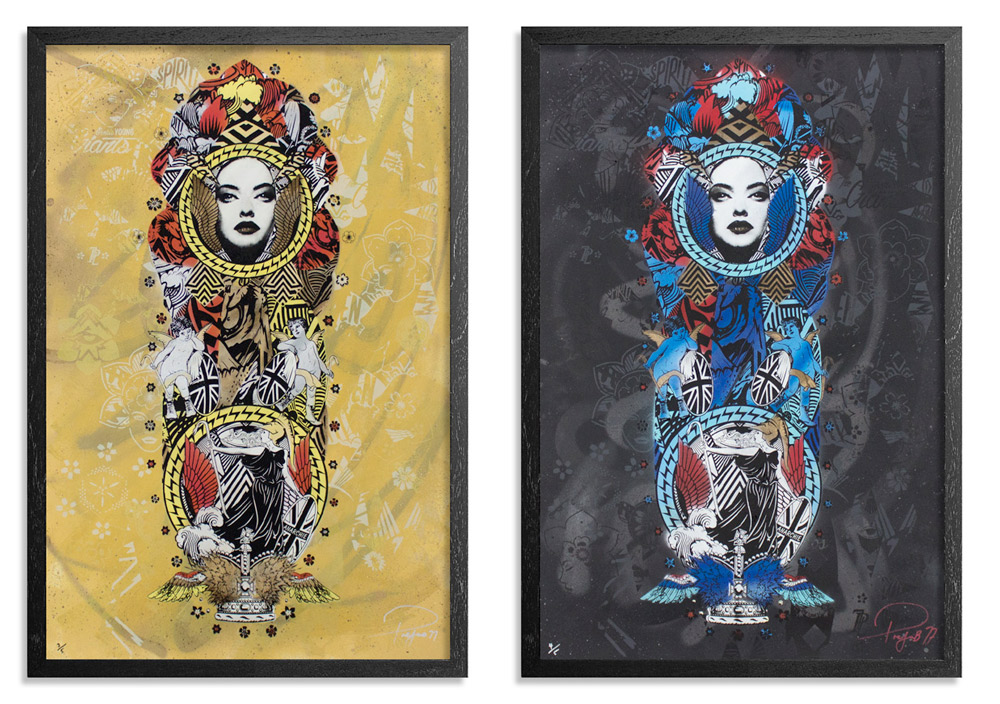 The cherubs in there woven with the crowbars is a nod to corporate theft and greed, things like that. There are a couple of these gravestones with “Finis” draped in the flag with Britannia’s helmet on it. At the moment we’ve got this breakup of the union, Scotland is going to leave, so it’s also a nod towards current politics.

You’ve got Britannia holding the crowbar and the phone box. When we grew up Britain was branded. It was branded by the crown and the phone boxes, but over the last 30 years it’s been all been eradicated. The phone boxes are gone. The monarchy is threatened. I would be surprised if there was still a monarchy in another 50 years. Exploding crowns and phone boxes have all been brought into these figures. If you look at these statues in England, they all harken back to the golden age, we’ve brought that back in. It’s always been beautiful, but it’s always a fading beauty. 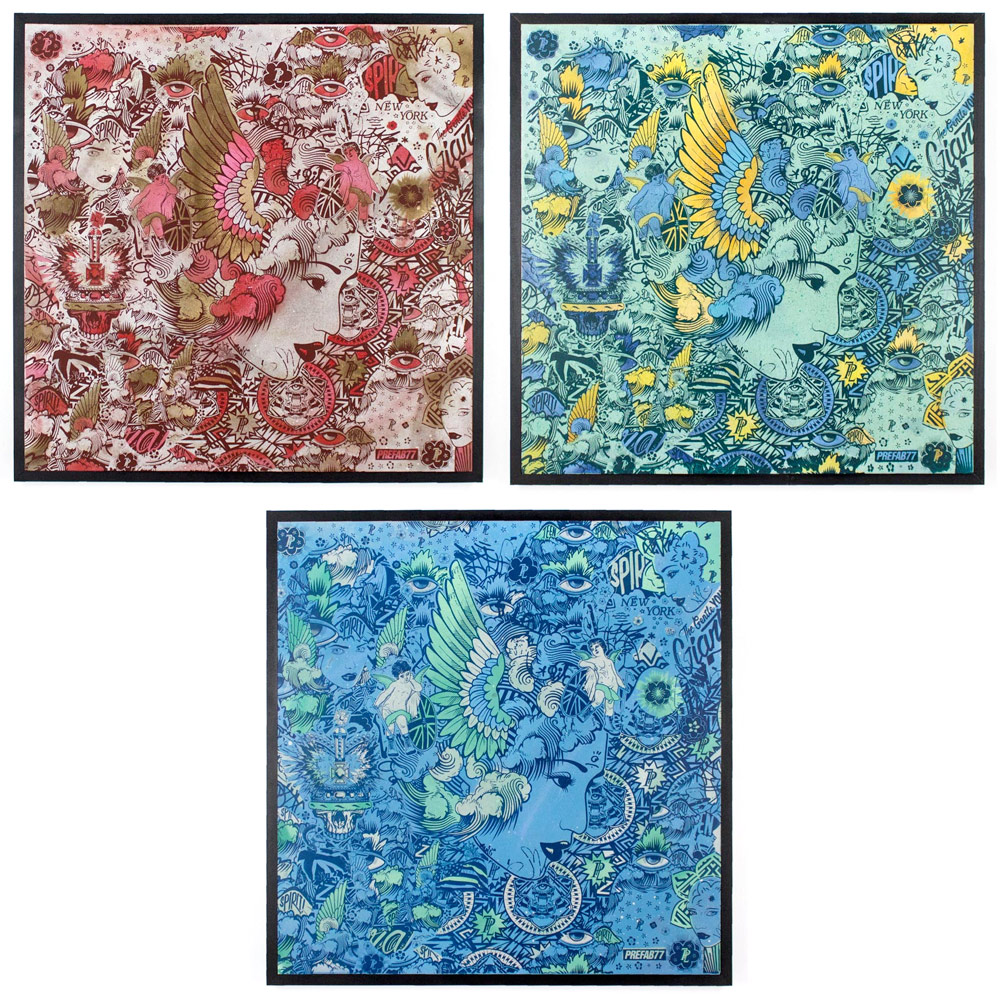 1x: When did you two begin working together?
Manning: I had been living in America for 12 years. I lived in San Francisco, Laguna Beach, Los Angeles and New York. I went to New York and saw the first kind of emerging street artists right on Elizabeth and Houston. It was still very dodgy. This was in like 1996. Faile, Obey and Swoon were just appearing in doorways right by where I lived, and I understood right away what they were trying to do. They were mixing the already existing decay that was there. Doors that had been graffitied over, and then painted, then graffitied over again. They were taking that urban experience and recreating it in art. I got it straight away and I saw how beautiful it was. 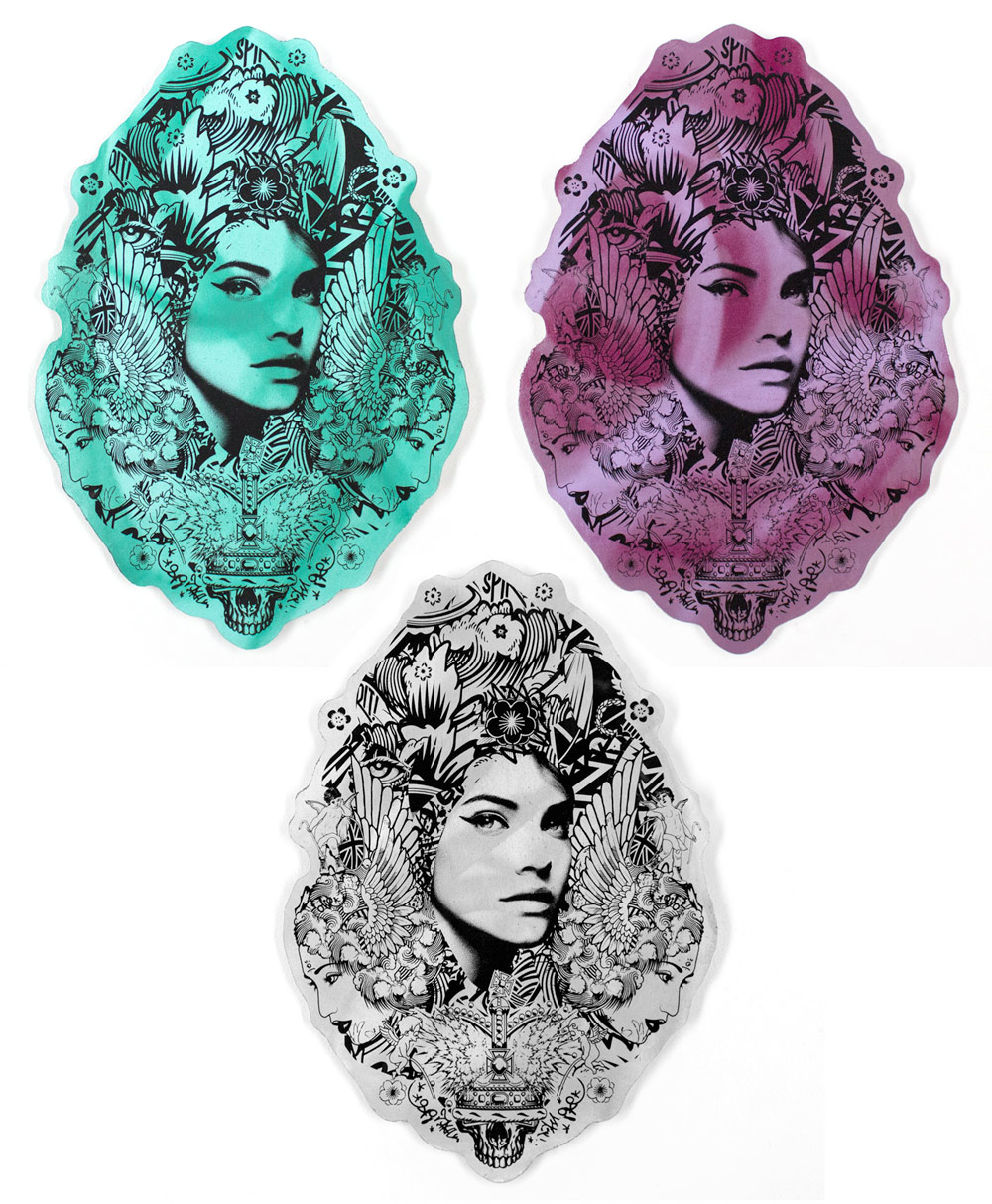 I moved back to Europe and in the back of my mind I always wanted to have a design company. I liked Alife and I thought how cool is this? They had the gallery, the studio and the store. All those guys who weren’t 100% graff writers and they weren’t quite street artists but they were part of the whole movement. So when I moved back to England I wanted to have my own set up. That’s when I formed Reluctant Hero and met Marc. We worked with Sean Jean, Nike 6.0, Hurley and Calvin Klein. Then I had an opportunity, this building came for sale and I opened up a shop called Electrik Sheep. Then we stocked, Zoltar, The Hundreds, 10 Deep and Crooks & Castles, it was a little mecca for street wear in Newcastle. From there we met the guys from Pictures On Walls (POW) and the natural progression was to open a gallery. In our first show we had work from Banksy, WK Interact, Hewlett, Pure Evil and a few others from the Pictures on Walls stable of artists.

Marc Ross: For us it was about being creatives that owned a gallery. Everybody gets introduced to something somehow, aside from Futura, who came out of the womb with a spray can. It was a different arm of the business for us aside from commercial work. After 5 o’clock you want to drop the client boundaries and just make your own stuff. The stuff we were surrounded by was street art. This was in about 2003-04. I was still at Uni and we had a small exhibition at the university, and Pete and his partner at the time approached me after the show. They were the only ones doing something amazing at the time. Having just moved back from the states I was super interested in what they were doing. They were always traveling, and just cam back from Japan. They said we’re going to open this boutique and sell these things that we’ve got throughout the world, alongside some homegrown art. POW was booming at the time. Banksy’s prints were becoming a thing, but they were still affordable. That was when we set up the gallery. We had similar mindsets. We both get the whole industry and what this might be and we wanted to be involved. We’re both talented designers and artists. 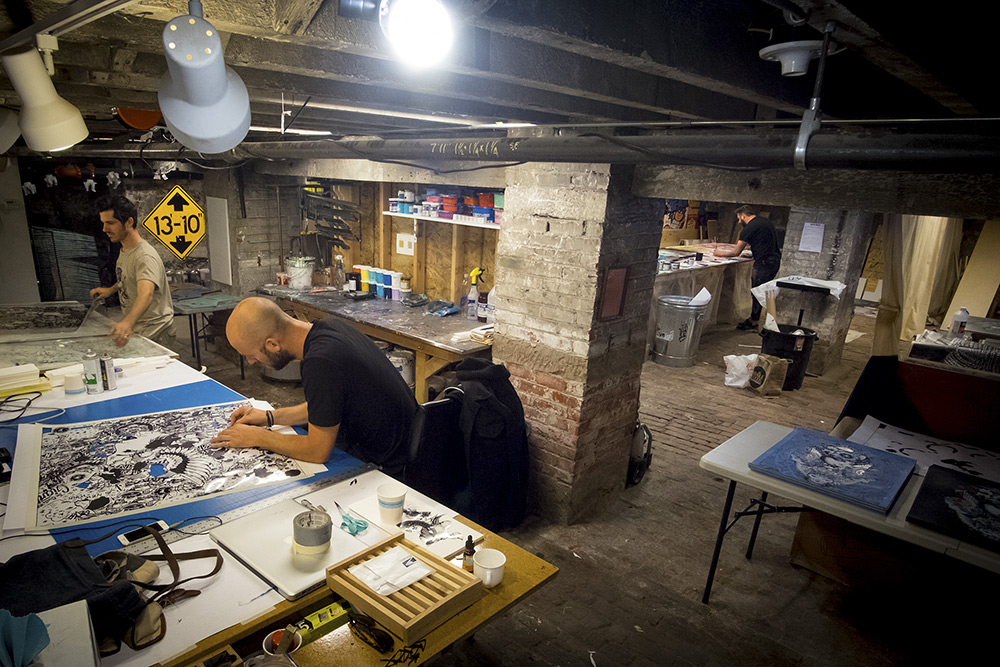 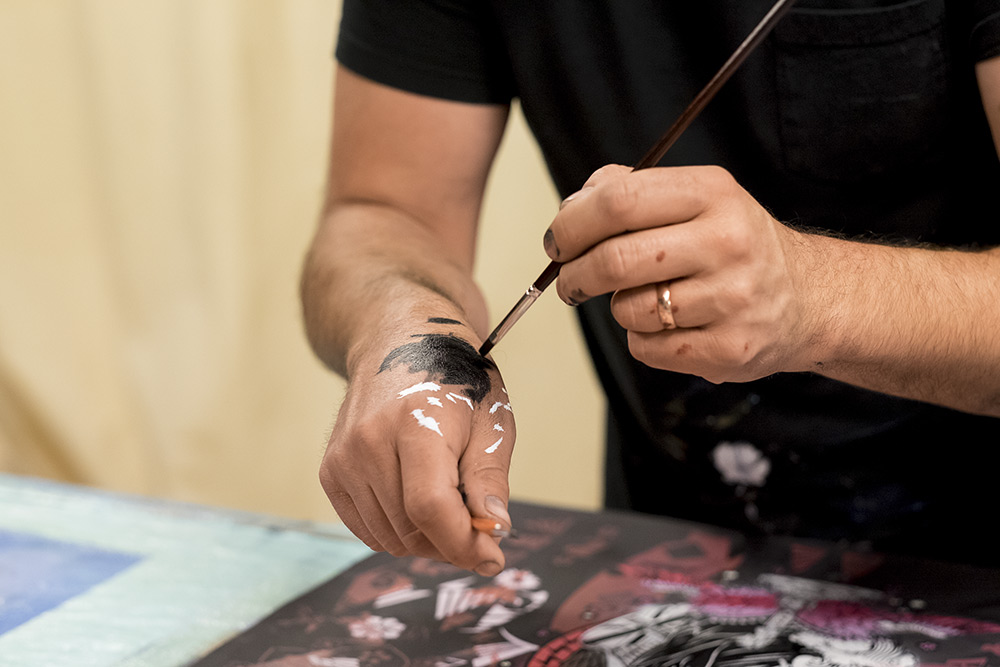 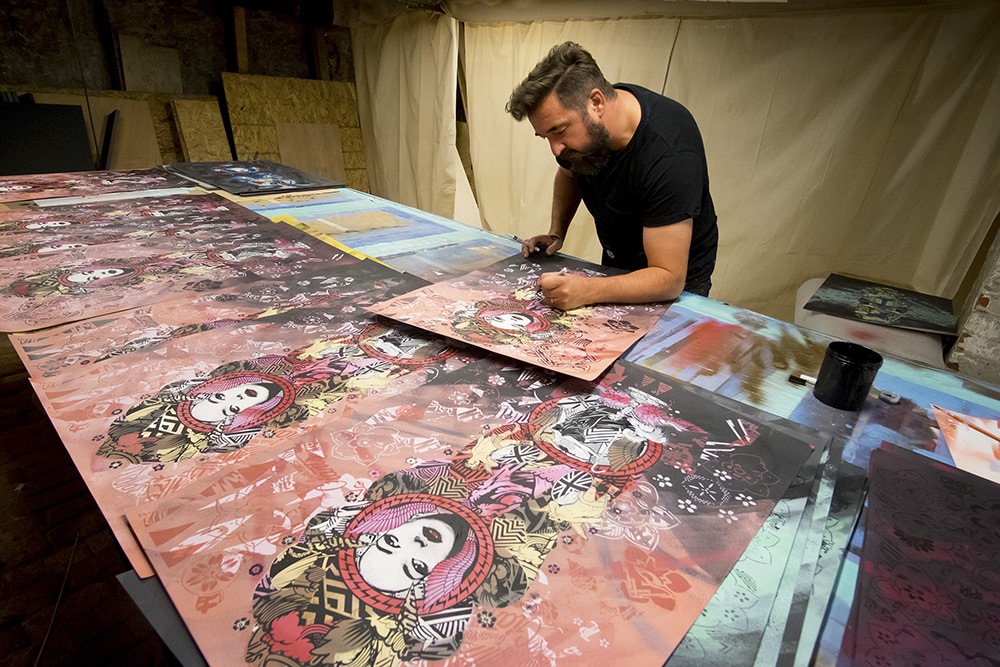 1x: How have you enjoyed your time here working in Detroit with 1xRUN and our in house Master Printer Jonny Alexander?
Manning: It’s been great. There’s an energy here. We love it. We’re both do-ers, so we’ve fed off the energy of 1xRUN. We had a lot of elements ready, but it’s been a very holistic experience, coming here, working out the images, working out the show. Painting. Printing. It’s been brilliant. In the past we’ve had a small weekend with our local printer, but normally working with printers is very different. Working with the crew and team here at 1xRUN to visualize something. The first half was realizing what we had to meet and getting it done, then in the second half we’ve come up with 4-5 pieces that were totally off the cuff. 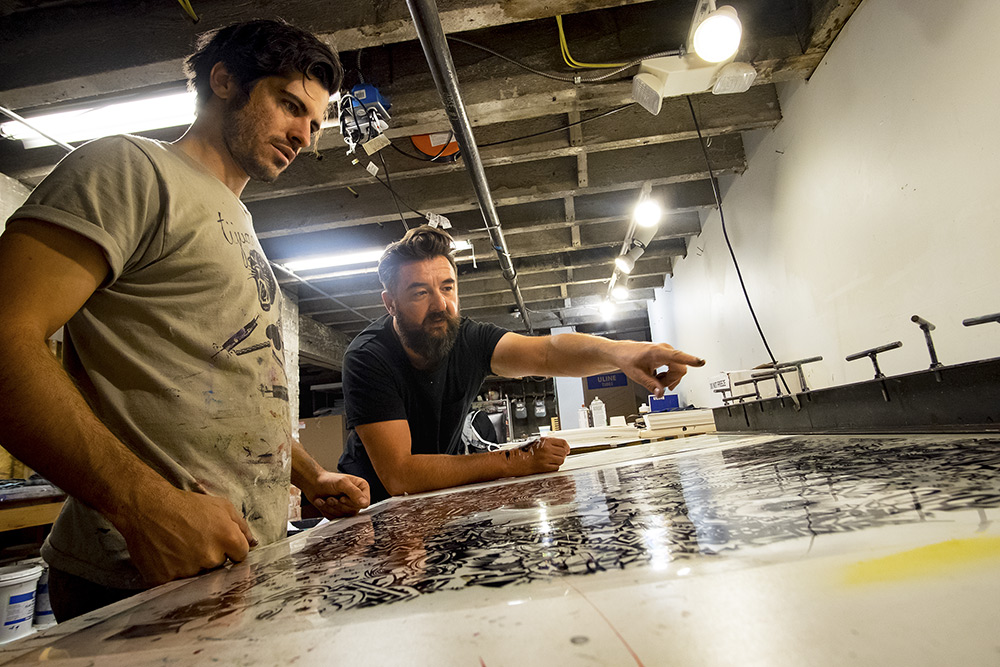 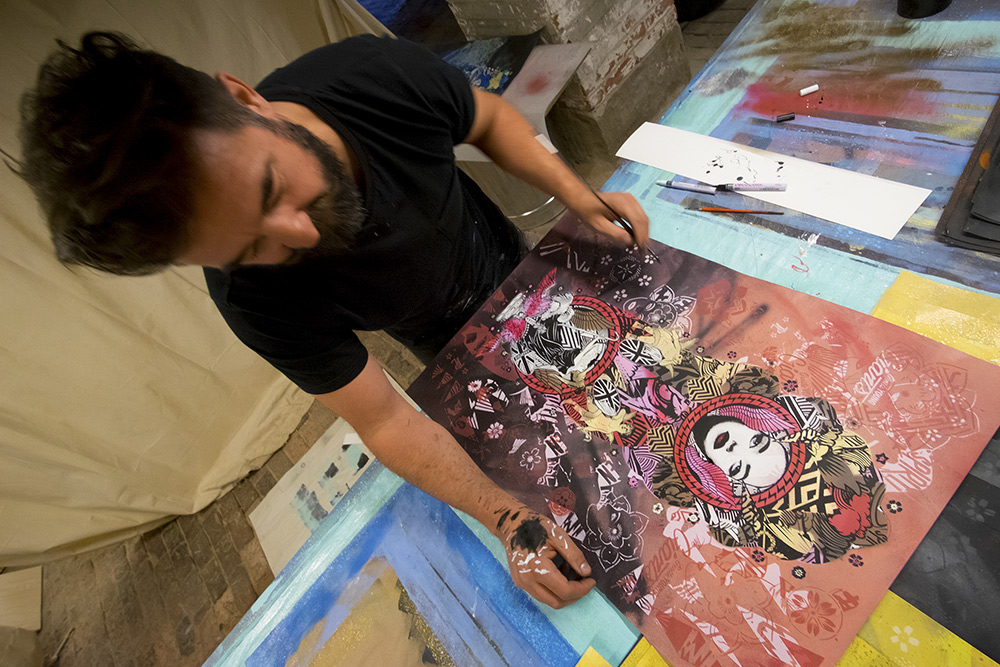 Having that energy here, and the equipment here with people here who are knowledgeable has helped us to no end. That was the very thing we wanted. When this idea first came up, we said to each other how great would it be to have a printer for two weeks? At the end of it, maybe it’s a new direction or technique that we’ve achieved out of it, and we’ve done that. Finding things that could work for a future project or an ongoing thing. Being here in the city of Detroit, seeing what 1xRUN has done and what you’ve planned helps you think of what is possible as well. 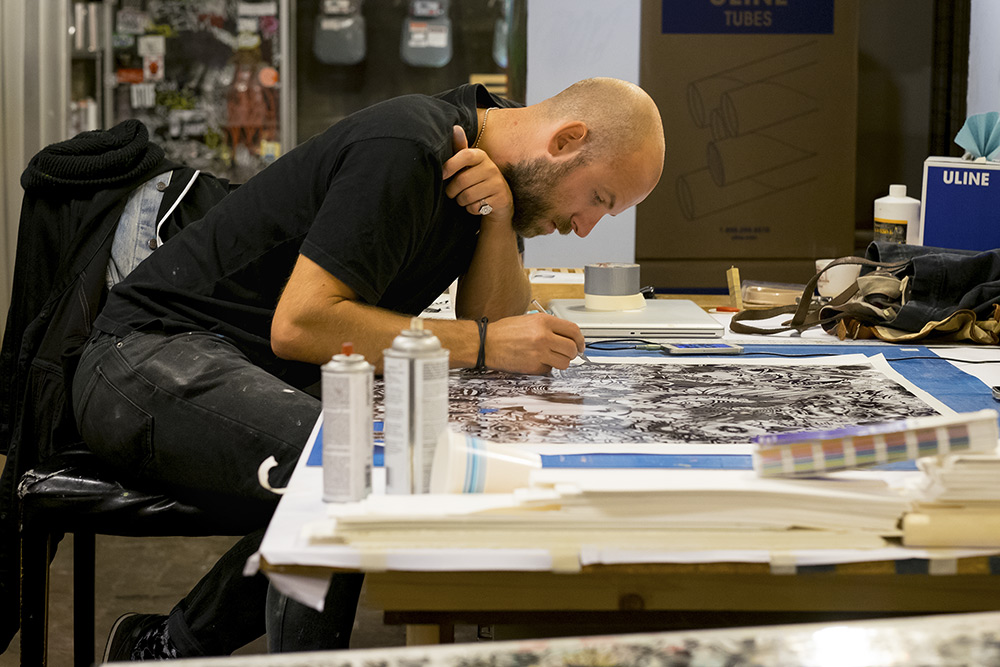 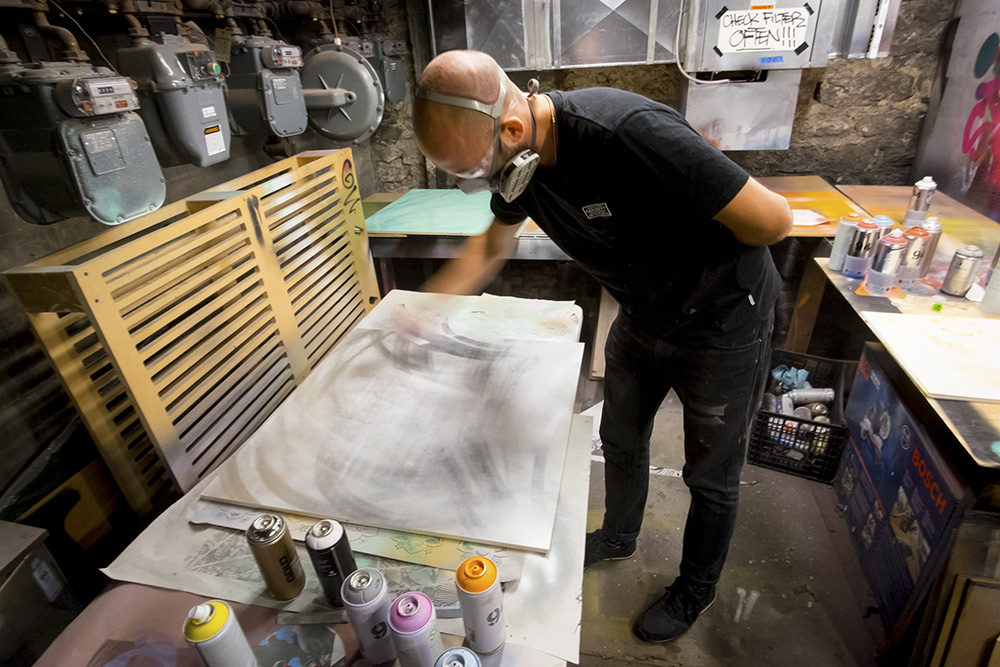 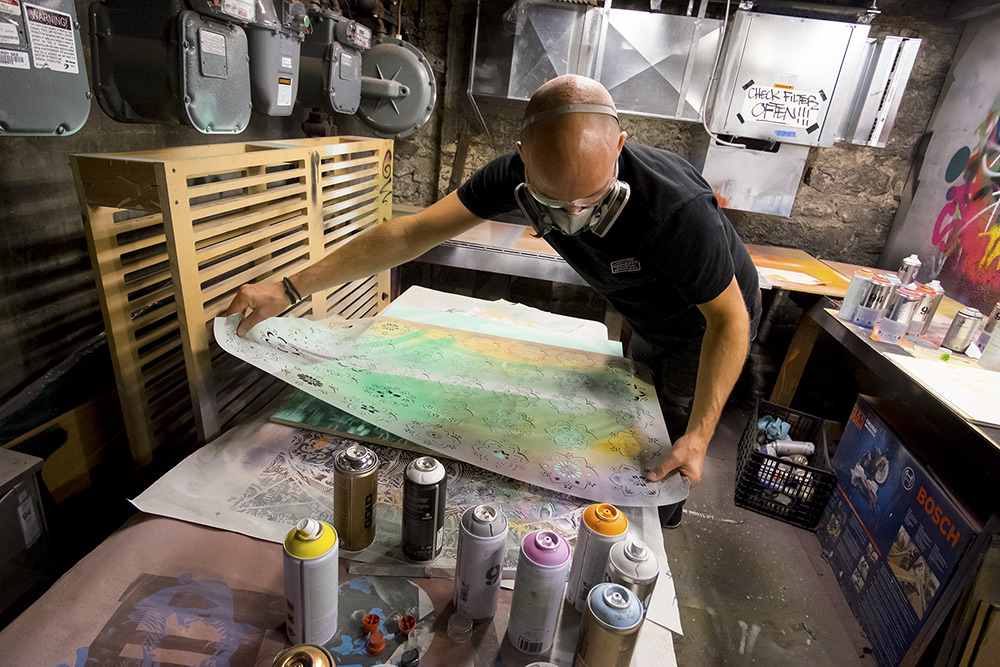 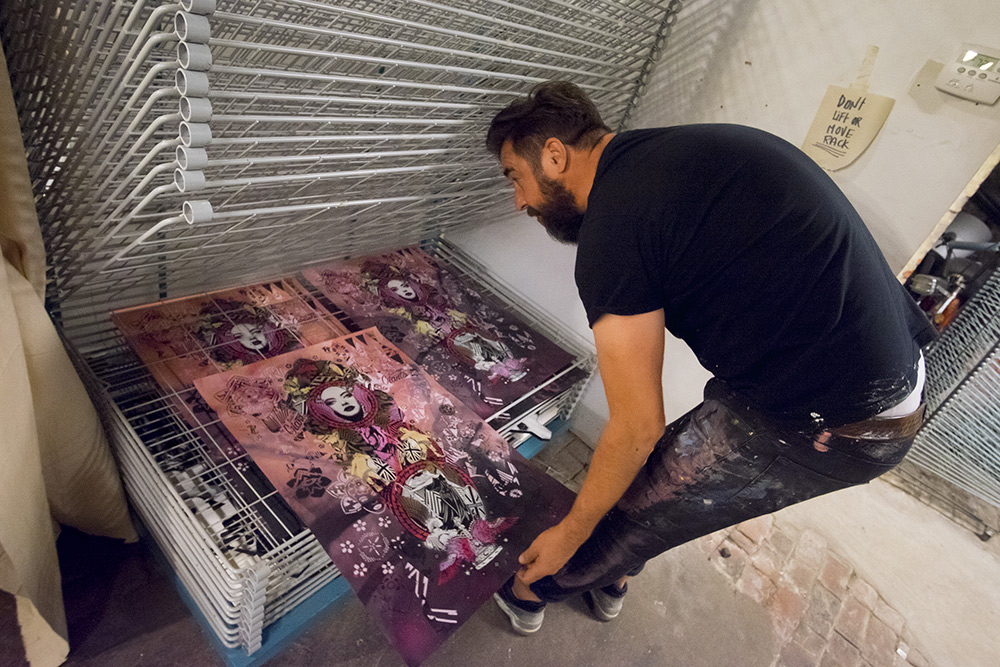 1x: What are your plans for the future here for Prefab77?
Manning: We’ve got a really good following in the United States and we want to build on that, we love the scene that’s happening here. Next we want to take it to the streets. Take the scaleable concept and take it from prints and originals to building size. It’s not that you want to be a “mural guy” but for us we want to show and take our concept and make it larger, it’s all about degree.

Ross: We’ve done building size artworks, but it’s getting some of these pieces out there on a larger scale. The imagery is really powerful. A lot of people say that. So to get these figures that we do huge, that is something that’s really dramatic. It works on a huge scale. There’s an image that we did on this pub. It’s all about taking an image and thinking what’ s the biggest story you can tell.

Prefab77 were interviewed in Detroit during their 1xRUN Residency by 1xRUN Editor-In-Chief Pietro C. Truba. Follow him @pietro1xrun