We are excited to welcome back legendary artist Cey Adams who joins us for his second release. Previously we caught up with Adams to discuss his Trusted Brands series in his debut release, however, this time he has turned his focus to another icon, his friend and longtime colleague Russell Simmons with Russell Rush 20 on sale now on 1xRUN.  The two have been working together since even before Simmons’ Def Jam records had officially formed and to this day Adams plays an integral part in the Simmons brothers Rush Philanthropic Arts Foundation (RPAF). In our latest 1xRUN Interview with talk with Russell and brother Danny Simmons about RPAF which hosts their annual Gold Rush Awards on October 24th. You can still pick up tickets here to help support RPAF and grab Cey Adam’s latest print of icon Russell Simmons today… 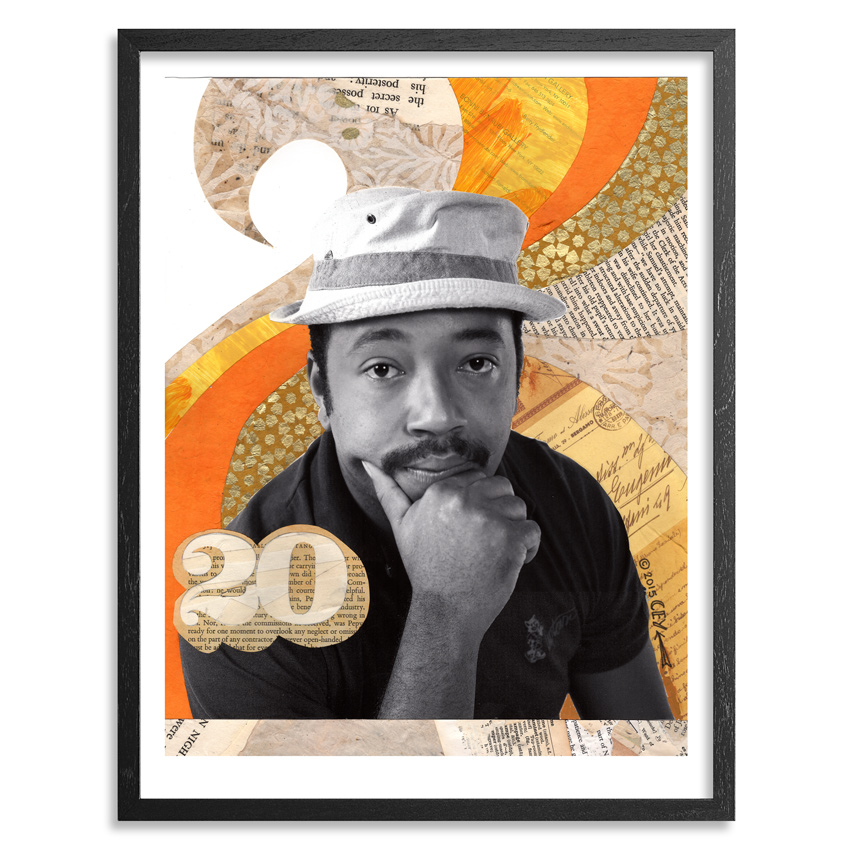 Russell Rush 20 by Cey Adams – Available Now on 1xRUN  –  “The piece I created honors my life long friendship with Russell and the Simmons brothers. The golden colors symbolize the deep rooted history we collectively share. The curves represent movement and change.” – Cey Adams

1xRUN: You both started the Rush Philanthropic Arts Foundation (RPAF) in 1995 along with your brother Joseph “Rev. Run” Simmons, was there a specific moment that caused the three of you to say “We have to start this program right now” or did it evolve from a larger conversation?
Danny Simmons: The moment was when I was looking in SoHo for a gallery to show my work, and after much research I didn’t see any artists of color being shown. This was before Rush, but I decided then to provide opportunities for artists that weren’t represented in the mainstream.  I threw my first show at Russell’s office for Def Jam. It was Rush Productions at the time. I held onto that formula for a few years until I decided it was time to open a gallery. I went to Russ and we went to Run and we gave a benefit to start a gallery and children’s foundation. 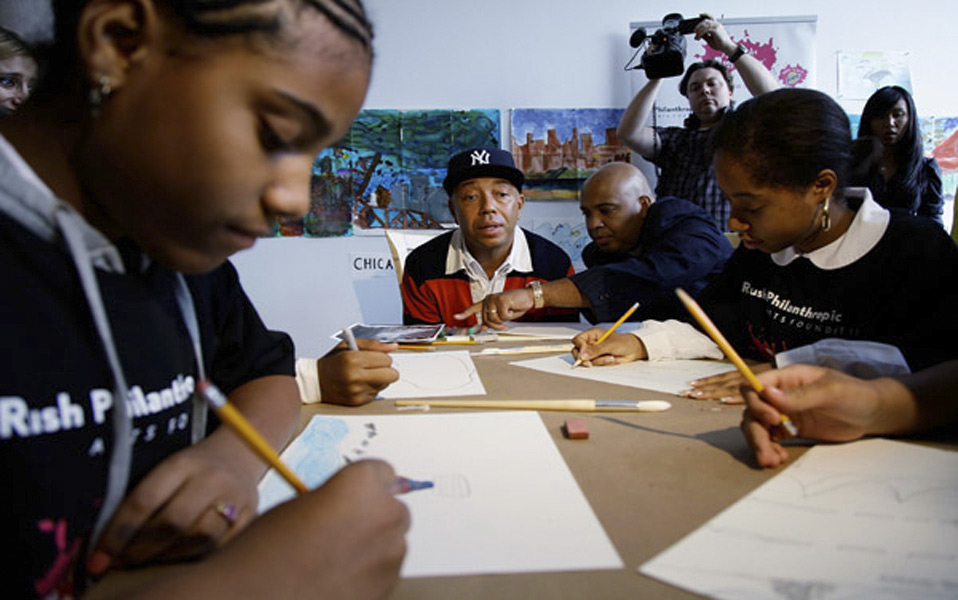 Russell Simmons: My brothers and myself always saw the need to continue to cultivate the creativity in our communities. We saw the housing projects that where directly across the street from the arts district in Chelsea and saw the disconnect. We saw there were so many under represented artists out there, we partied with them, they showed at my offices. We needed to make it happen, support our youth, artists and communities. As I always say, “art saves lives, its that simple”, and the work we have done over the years proves it!

1x: RPAF begins early, working with children from a very young age to introduce them to the arts. Visually, sonically or otherwise, what are some of your earliest memories as a child as far as the arts were concerned in your household?
Danny Simmons: My earliest memories were my father reciting his poetry and my mom painting at her table top easel. Then her bringing me, art supplies and helping me to paint.
Russell Simmons: Like my brother Danny stated, I remember my father reciting his poetry and my mother painting.

1x: In regards to your teenage years and more formidable years, for you personally, what role did art play in your life before you went to college?
Danny Simmons: Art was always present when growing up. My father’s passion for equality was deeply ingrained so I was involved as a teen in many organizations of that time.  I wrote passionate poetry on social issues but it wasn’t until later that I began to fully explore painting.
Russell Simmons: For me like many others, art fosters creativity, plants those creative seeds that help you with your vision and goals.

(L) All 3 Simmons Brothers / (R) Joseph & Russel with their Father

1x: Russell, let’s discuss the early years over at  Def Jam, when you first started out what was it artistically about the visual artists and musicians you signed early on that you were drawn to?
Russell Simmons: Their voices, creativity, delivery, energy was unfiltered, raw and delivered with emotion. They inspired and moved a generation with their voices and art.

1x:  How important was the visual message that accompanied the music, and creating a cohesive package for everything coming out of Def Jam at that time?
Russell Simmons: We created a brand that is timeless, its because everything we did was true to who we were. All our visuals aligned with the artist, their emotion, delivery and everything. Check out my man Cey Adams’ prints on sale now on 1xRUN that he made to benefit the foundation. Cey has been around since the beginning! 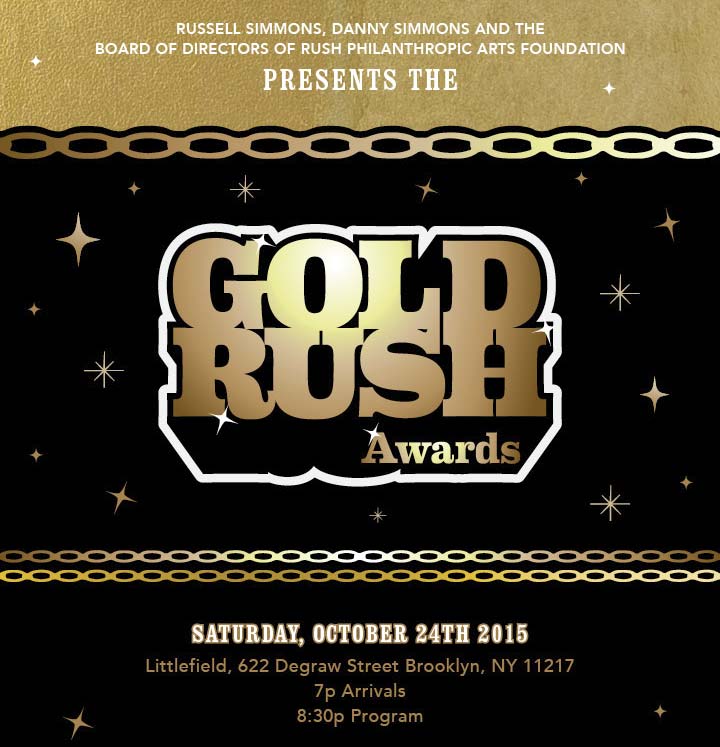 1x: Building off of that, RPAF also teaches children about the business aspects of art, creating a portfolio, running an entire gallery, the exhibition layout, theme and design, as well as, the brochure and promotion. For you, how important was that to include creating the entire package?
Russell Simmons: We know that the thousands of youth we touch every year, not all of them are going to be the next Kehinde Wiley, Carrie Mae Weems and other amazing visual artists. We understand this and try to give them the experiences and tools they need to pursue different careers, whether its in the arts, or elsewhere. We have students that are about to or have graduated with a degree in architecture. We have kids that pursue fashion. We have kids that want to be entrepreneurs. This is an arts organization, but we do much more.

1x:  When the program began what were some of the biggest obstacles?
Danny Simmons: The biggest obstacle then and now is funding. The needs of artists and the community is sometimes unequal to our resources. Its always been a challenge to try and meet the demand for services.

1x: Danny, as a visual artist yourself for very many years, what are some of the pieces of advice that you offer to students struggling to find their voice with their artwork?
Danny Simmons: My biggest piece of advice is don’t be afraid of your creativity, allow it free range to be open and explore new ideas. Also to become part of a creative community where you feel comfortable sharing thoughts and ideas. Finally to be open to listen to criticism.  Its very necessary to use others opinions to grow as a creative person. 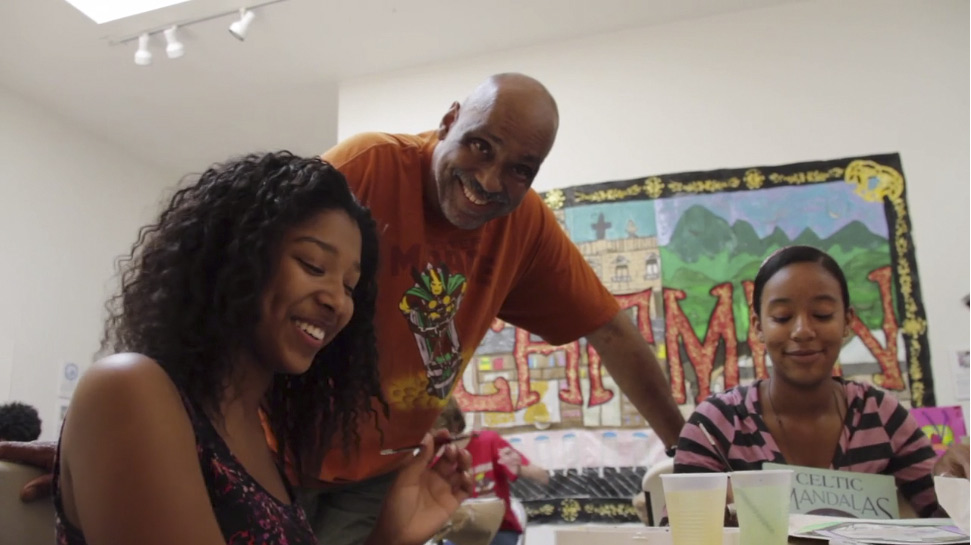 1x: RPAF focuses on art in several forms including dance. Russell, over the years you’ve shown yourself to be a proponent of artistic expression in any form, whether it is poetry, comedy or music, how important is it for you for everybody to find the art in these different forms, in addition to more traditional painting or drawing ?
Russell Simmons:  Everyone has a voice, they don’t always get their voices heard. I will continue to support all artistic expression whether its through my businesses or through my foundation.

1x: RPAF now works directly with New York City schools, what has changed now that you are working hand-in-hand with the schools directly?
Danny Simmons: We are able to work with more children to help them exercise their creativity and expand their horizons.

1x: There are always statistics with children’s involvement in art having a positive effect, but from your experience what effect do these programs have on these children? Anything you would add?
Danny Simmons: I would include yoga and meditation as a addendum to arts programming.  It will allow kids the opportunity to become centered and be the best they can be.

1x: How have you seen the RPAF programs change over the years? What are some of the major strides they have made? Where is it headed?
Danny Simmons: Rush needs to expand beyond New York City and I’m working to establish it first in Philadelphia and then nationally.
Russell Simmons: We have helped thousands of youth over the past 20 years. We have expanded to New Jersey, then going to Philly with my brother Danny now living there, and soon to Los Angeles where I am primarily too. Kimora also established a scholarship fund to help our youth get the financial support they need as they get into college and universities and more. We have made major strides and will continue to try to touch the lives of more youth and help the youth we have at Rush further.

1xRUN: Where can people find out more about the RPAF and help out?
Danny Simmons:  You can find out more at rushphilanthropic.org and come out and visit our galleries in Brooklyn and Chelsea in New York.
Russell Simmons: You can also follow them @rush_arts on Instagram and at @rush_art on Twitter and visit the site to support and follow our artists, our artist and art community. They are an extension of Rush and what we stand for.

Danny and Russell Simmons were interviewed by 1xRUN Editor-In-Chief Pietro Truba. He has previously interviewed Ricky Powell, Doze Green, Fred Armisen and Shepard Fairey among others. Follow him @pietro1xRun