For her latest RUN Portland-based artist Stella Im Hultberg takes a fresh look at Korean shamanistic folk culture with The Rite Of Spring. Taken from her recent exhibition the acrylic painting features Hultberg exploring an ongoing thread of Korean mythology alongside her relationship to motherhood in the modern world. Available in two sizes, including an massive oversized hand-embellished edition, this RUN is sure to move quickly. Read on to find out more about Stella Im Hultberg’s latest release and more . . . 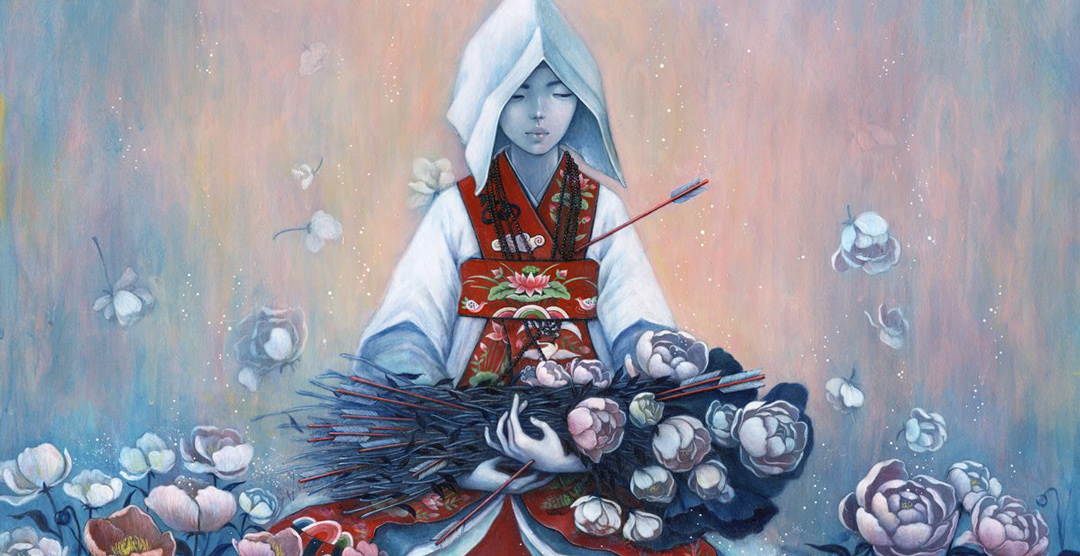 1xRun: Anything immediate you would like us to highlight?
Stella Im Hultberg: I really delve deep into Korean mythology and shamanistic folk culture with this piece and series. All the motifs on the shaman’s clothes represent a lot of the ancient folk philosophy and outlook.
Most of it is well wishing for long, prosperous, worry-free life, similar to what mothers (and fathers) would wish for their children.

1xRUN: When was this piece created and what materials were used?
Stella Im Hultberg: The original piece was painted in 2017 with acrylic paint on printmaking paper, then mounted onto wooden canvas.

1xRun: Tell us a bit more about this piece, was it part of a recent show, theme or grouping of work that you have?
Stella Im Hultberg: This piece, titled “The Rite of Spring”, was a part of my solo show “Mago” at Spoke Art in San Francisco, back in 2017. I had a running theme of Korean mythology that juxtaposed with my thoughts about current world and my personal observations of its relationship to motherhood.

This piece was especially inspired by Korean shamans, called mudang, or manshin. The central figure is wearing one of many shamanistic ritual garbs, used to call upon spirits to answer our questions. They were channels through which lay people could ask the heavens about their plights and worries, and seek comfort. However, they were also one of the most exploited and persecuted people in Korean history. Something about that reminded me of womanhood in general and motherhood as well.

1xRun: Along with the flowers there are interspersed arrows, what is the significance behind the arrows?
Stella Im Hultberg: The arrows refer to the wounds that we carry with ourselves throughout our lives. Mixed with flowers, they’re a bit hard to find, but our wounds are sometimes that way – they hurt, yet they are cherished and are deemed beautiful sometimes. 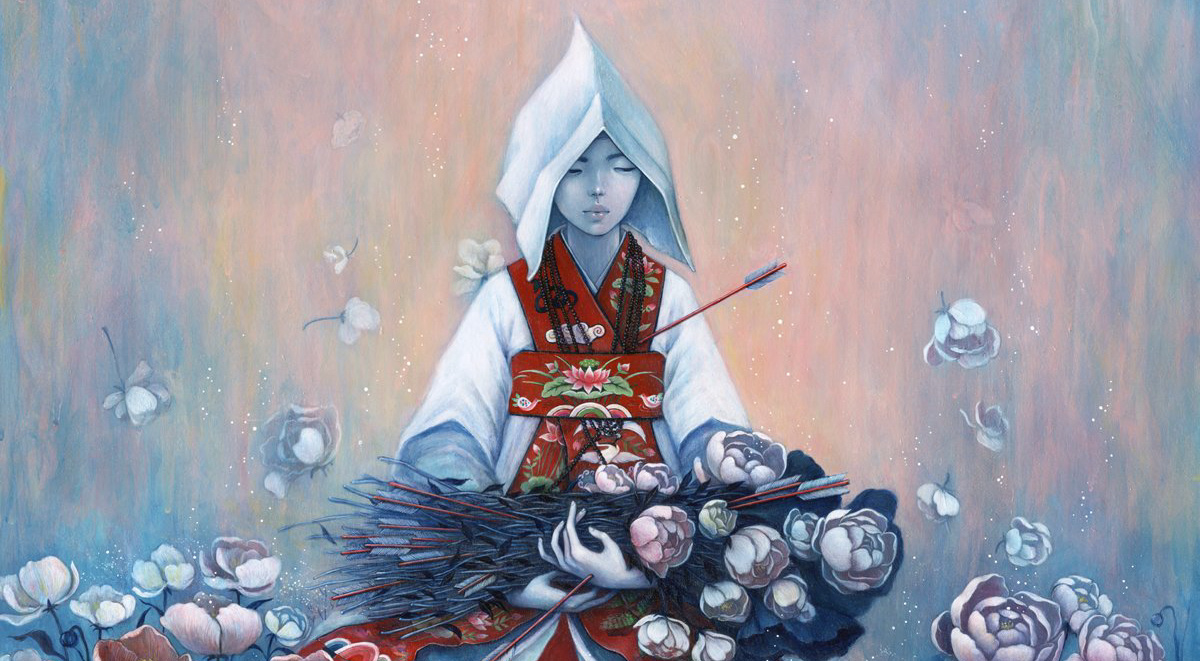 1xRun: What kind of flowers are depicted here? Were they chosen for a specific reason? If so what?
Stella Im Hultberg: Flowers, to me personally, mean my mother, or my connection to her, now both as mothers. She loved flowers, especially peonies, depicted here, among some others (poppies, anemones, and some other random flowers I imagined up).

After we moved to Portland with a then-baby (now 5), I was suddenly incessantly bombarded with flowers and plants of all kinds, and found myself noticing them more and being reminded of my mom and her youth. I had forgotten how youthful and colorful she had always been – literally colorful, always wearing bright colors, red lips and finger nails. She had a certain vitality and energy, and she would run around any new city we were living in.
I think, perhaps, our nostalgia for our childhood isn’t really for our young selves, but maybe we are missing the youthful, young, healthy, near-invincible looking parents we once had.

Also, a while back, I heard a podcast about flower vendors and deliverers, who commented on how heavy they are once grouped together in large bunches and buckets. Somehow that always stuck with me – the fragility of flowers, contrasted by how heavy they are once piled up together, seemed very representative of the emotions often attached to the said flowers. Love, especially – it feels so delicate, beautiful, sweet, yet so heavy and even burdensome at times.

1xRun: How long did this piece take from start to finish?
Stella Im Hultberg:  I worked on this piece concurrently with many other pieces that went into the solo show. I have to work around my kid and being a parent, so it’s hard to really measure the amount of time it took. It probably took 3-4 months off and on. 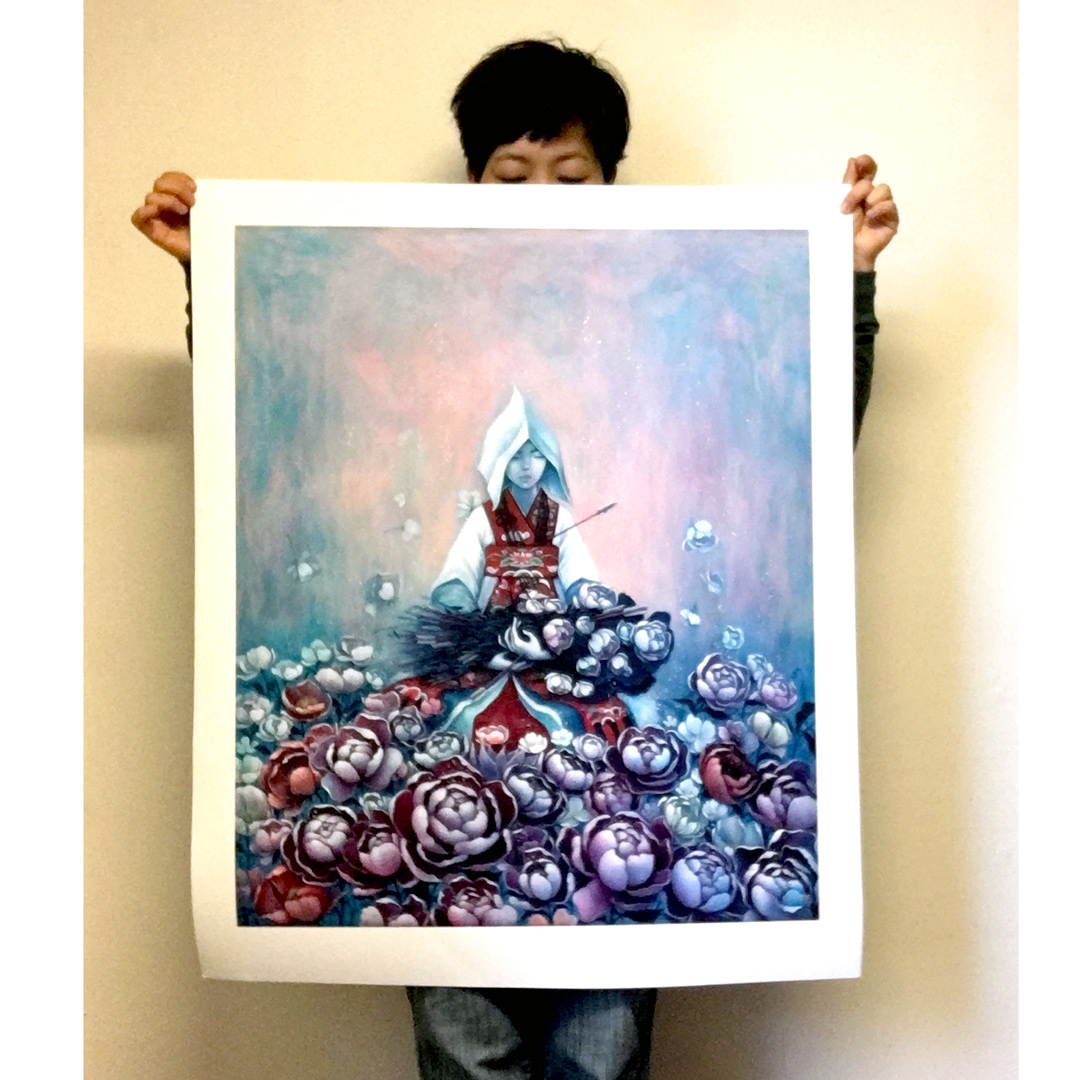 The Rite Of Spring – Oversized Edition by Stella Im Hultberg

1xRun: What is unique about this piece compared with your other work?
Stella Im Hultberg:  It’s my first painting featuring a mudang (shaman), with Korean motifs on the clothing. It’s also heavily referenced (the clothing), as opposed to normally imagined or enhanced patterns and shapes I tend to paint. Also, it’s unique in a sense that it is on paper mounted onto wood. It’s got a different texture up close. 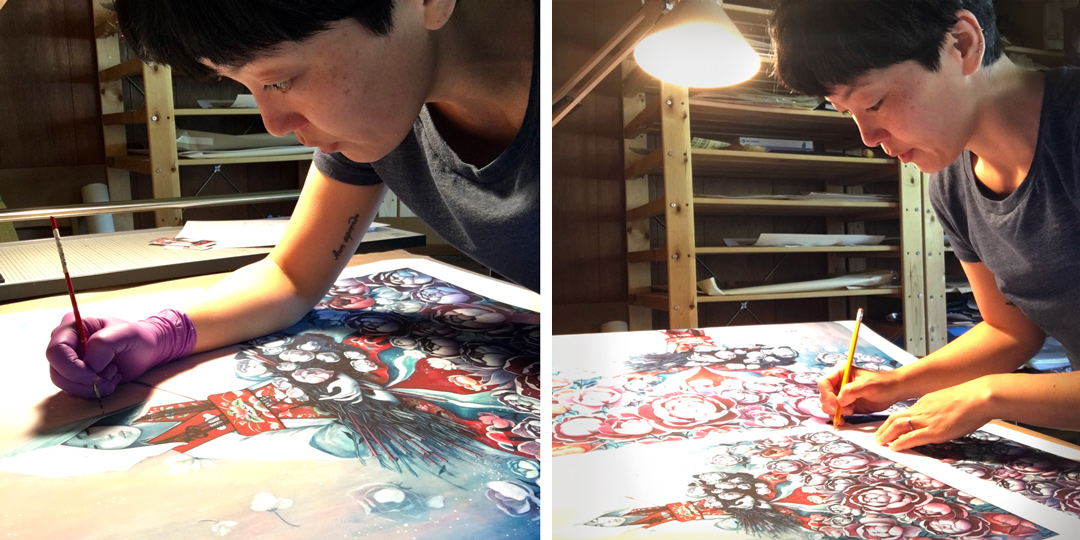 1xRun: Why should people buy this print?
Stella Im Hultberg:  As an honor to/in solidarity with women, mothers, and even humanity :D 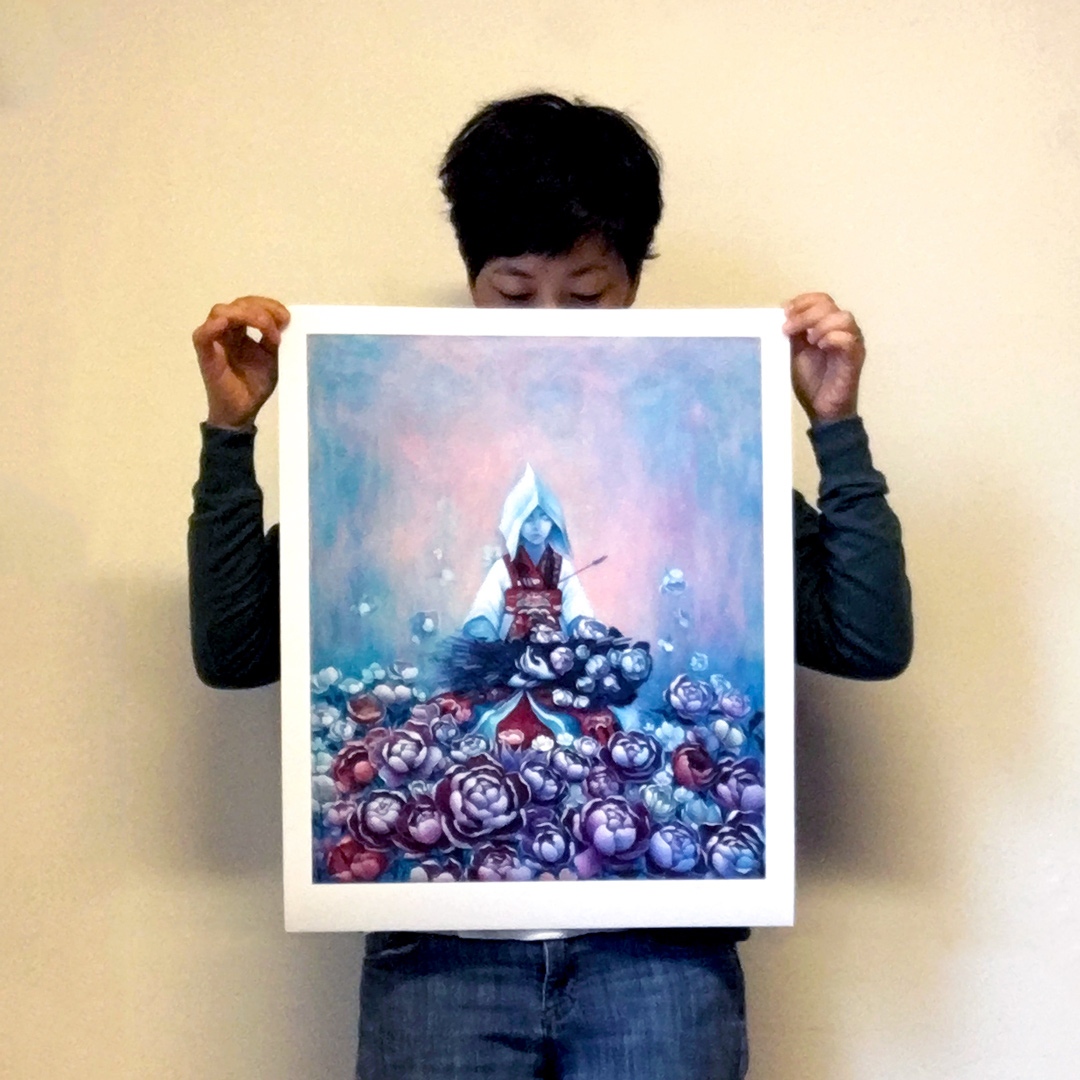 The Rite Of Spring by Stella Im Hultberg

1xRun: It’s been a while since our last release, what have you been up to over the past year?
Stella Im Hultberg:  I have been trying to balance parenting with work, mostly. Trying to space out work just so that I can be an involved parent for my preschooler. We don’t have any type of childcare or family near by so it’s an important balance to learn.

1xRun: Any shows or other big news coming up?
Stella Im Hultberg:  I have a mini solo show at Thinkspace this fall, which is taking up most of my time.

1xRun: What are your plans for the rest of the summer?
Stella Im Hultberg:  Working away on my solo show pieces, and getting my kid ready for kindergarten.