We welcome back Canadian artist Turf One as he returns with two new works in his latest release As Above, So Below. Bringing in two new paintings The Owl and Rite Of Passage, Turf One explores his subconscious through his latest intricate oil paintings. Pulling in free flowing ideas Turf One tackles the soul and a symbol of resurrection and more. Read on as Turf takes us behind these images . . .

1xRUN: Tell us a little bit about these two pieces, anything immediate you would like us to highlight about these two images?
Turf One: “The Owl” is the keeper of sacred knowledge. The butterfly represents the soul, it is also (as the owl) a symbol of resurrection. It is often associated with fire, which is interesting as it often means its death (attracted to the fire of the candle)…The shape and placement of the butterfly in the painting make it look like a heart, containing this vital essence as well as its own death… Like the burning candle, flame of life and death at the same time… The flame is reminiscent of the sacred heart. 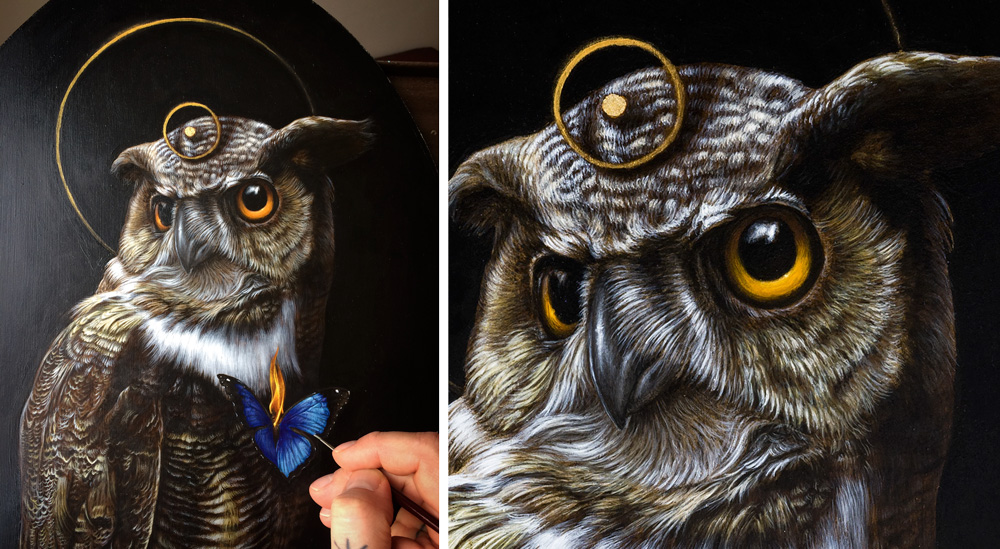 There is a dynamic of opposites feeding each other here… The butterfly is the owl’s prey/food and its core/heart at the same time… It is a diurnal insect in opposition to the owl being nocturnal, day inside night, light inside darkness, Life inside death and death inside life…

“Rite of Passage” is in a way a Memento Mori. but not only. It is also in the vein of initiatory paintings and sacred art, inspired by alchemy, hermeticism and fraternal Art.

It contains symbols or archetypes representative of one of my most reoccurring themes, the exploration of the notions of Life and Death, their nature and their boundaries… It holds, as many of my paintings, an attempt at overcoming the idea of Death perceived as a definite end to Life. 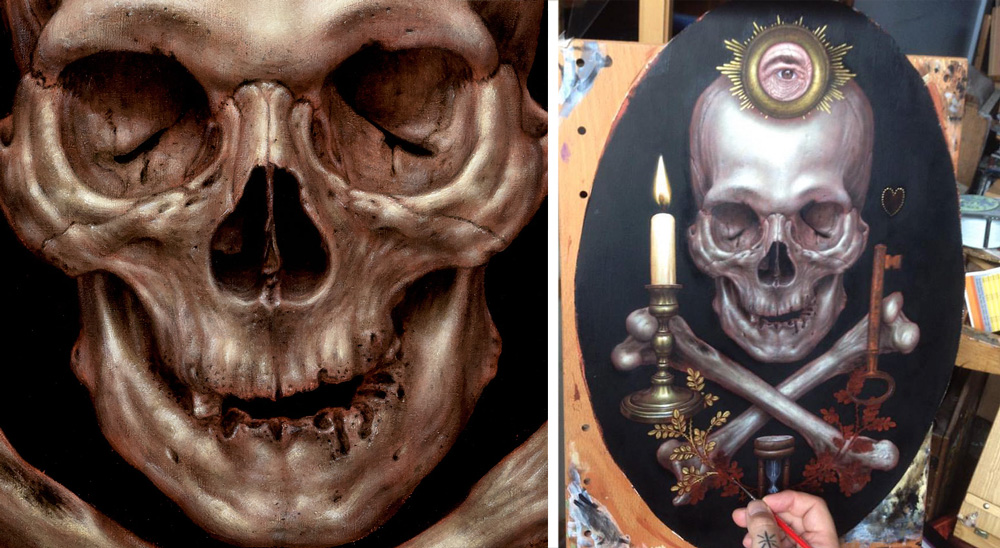 1x: Was each image part of a recent theme, series or show that you had? If so how did it fit into that given grouping?
Turf One: These are recent paintings which share similar themes. They are representative of the exploration of my subconscious through my work. These are pieces which were created by allowing the images or symbols to emerge rather freely, following my inspiration without over­-guiding it rationally.

1x: What materials were these pieces created and what materials were used?
Turf One: Oil, acrylics and gold leaf. Rite of Passage was created in 2015 for Troïka, a 3­person show with Shawn Barber and Mike Davis at Yves Laroche gallery in Montreal. The Owl was created this past winter for a collector and friend of mine.

1x: How long did each of these images take to create from start to finish?
Turf One: I would say that each of these paintings represents about a good month of work.

1x: Describe these two images in one gut reaction word.
Turf One: Archetypes. 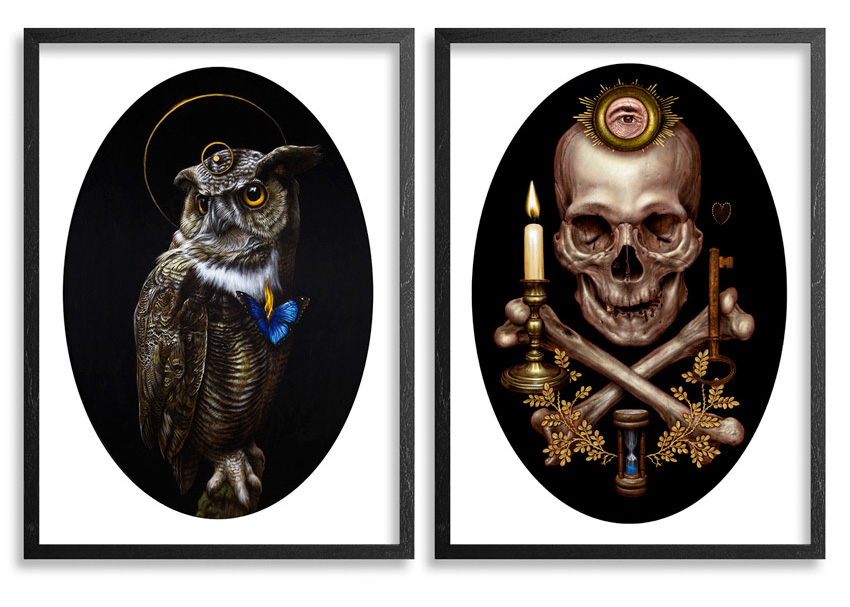 1x: It’s been a few months since our last release with you, what have you been up to so far for 2017 ?
Turf One: Painting as much as I can and being a dad.

1x: What was the last piece of art that you bought?
Turf One: I received a painting of a french Guignol puppet theatre from my godfather. He used to restore paintings. This is a piece I grew up with and which had a huge impact on me and my Art… It probably is one of the reasons why I have been so obsessed with Theater stages my whole life… It was painted by Charles Monginot (1825­1900), a french painter from Lyon. 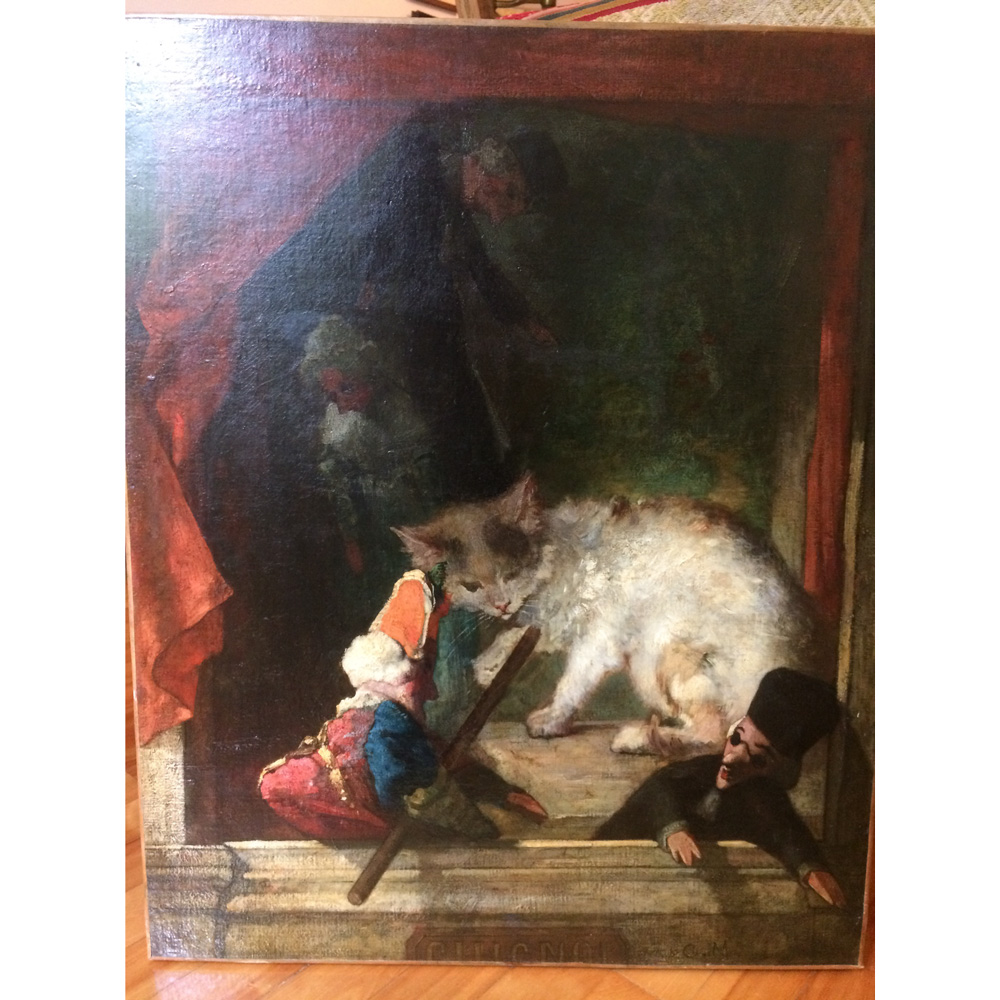 1x: Any big shows or events coming up that you’d like to share?
Turf One: I am curating a show at BeinArt Gallery in Melbourne, Australia in December. Some of my favorite artists will be in it : Shawn Barber, Dan witz, El Gato Chimney, Mike Davis, Peter Ferguson… the show is called Reliquaries and will open on December 9th.