1xRUN welcomes back Los Angeles based artist Aaron Nagel as he returns with his latest edition Reclining With Teraoka. Pulling inspiration from Japanese artist Masami Teraoka, this edition is available in Standard and an extremely limited Hand-Embellished edition. One of two tattoo themed paintings created for his recent exhibition at Abend Gallery, this image finds Nagel returning to one of his earliest loves, paying homage to the Ukiyo-e paintings that played an influential role in his art career. Read on as Aaron Nagel gives us the story behind Reclining With Teraoka, what he’s been up to and more below. . . 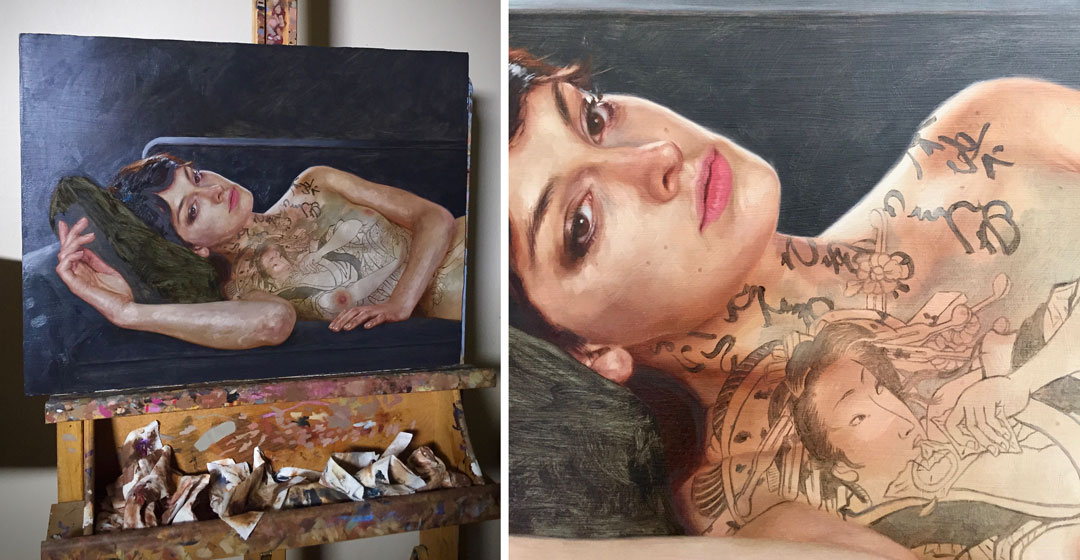 1xRUN: Was this image part of a recent theme, series or show that you had? If so how did it fit into that given grouping?
Aaron Nagel:  This piece is one of a pair I painted for a group show at Abend Gallery (Denver, CO) in 2016.  They both feature a figure with “tattoos” of work by artist Masami Teraoka,  who has always been one of my favorites. I’ve always thought Teraoka’s work would make great tattoos, but often 2d artwork doesn’t translate very well on a body unless it’s created specifically for it. But here I can flatten out the work, and set things up as if it only needs to look good at one angle…which it does, because it’s a painting.

I’ve always stayed away from painting tattoos, even if the models had them – mostly because it really tilts things toward the modern. And I was always weary of straying into the territory of Shawn Barber and other artists that frequently use tattoos as part of their work.

1x: When was this piece originally drawn and created and what materials were used?
Nagel: Oil on ACM (acrylic composite material, AKA Dibond) panel in 2016. 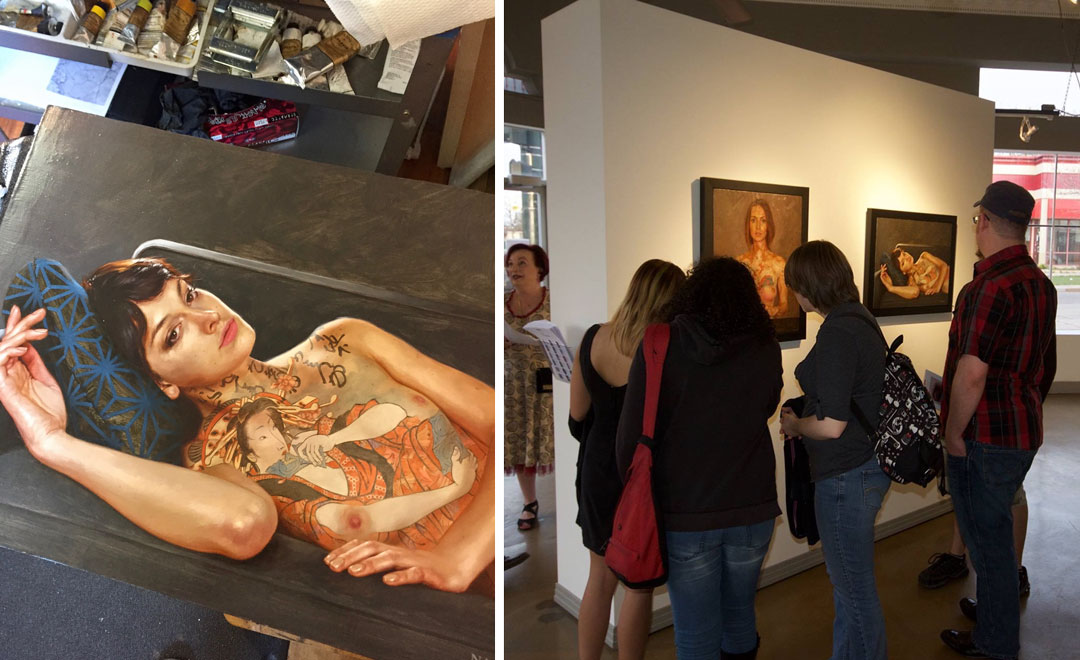 1x: Tell us how the idea and execution came about for this image?
Nagel: The process was similar to most of my paintings except that once the figure was complete, I added the tattoo in a few semi-transparent passes. I was concerned that if it was too opaque and saturated it wouldn’t sit on the body right – but it was also a little nerve racking each layer had to dry and I was scared I was going to ruin it.

1x: What is unique about this piece compared with your other work?
Nagel:  The tattoos on the two pieces in the series mark the only time I’ve tried my hand at anything remotely in the style of ukiyo-e, even if they are essentially reproductions. This is significant to me because Ukiyo-e paintings and prints played a good part in what got me into art in the first place. I love the style but have always felt it off limits to a white guy from California. There are non-Japanese artists that can certainly pull it off (more on that later), but I always felt like I wouldn’t do it justice…and shouldn’t really. So these pieces were kind of a way to get it out of my system a bit, while keeping it in a realm I was more comfortable with.

1x: Why should people buy this one of these prints?
Nagel: Personally, I always feel great buying art – – I never regret it and feel somehow like I’m contributing to and supporting that which is rad and true. Eloquent I know. 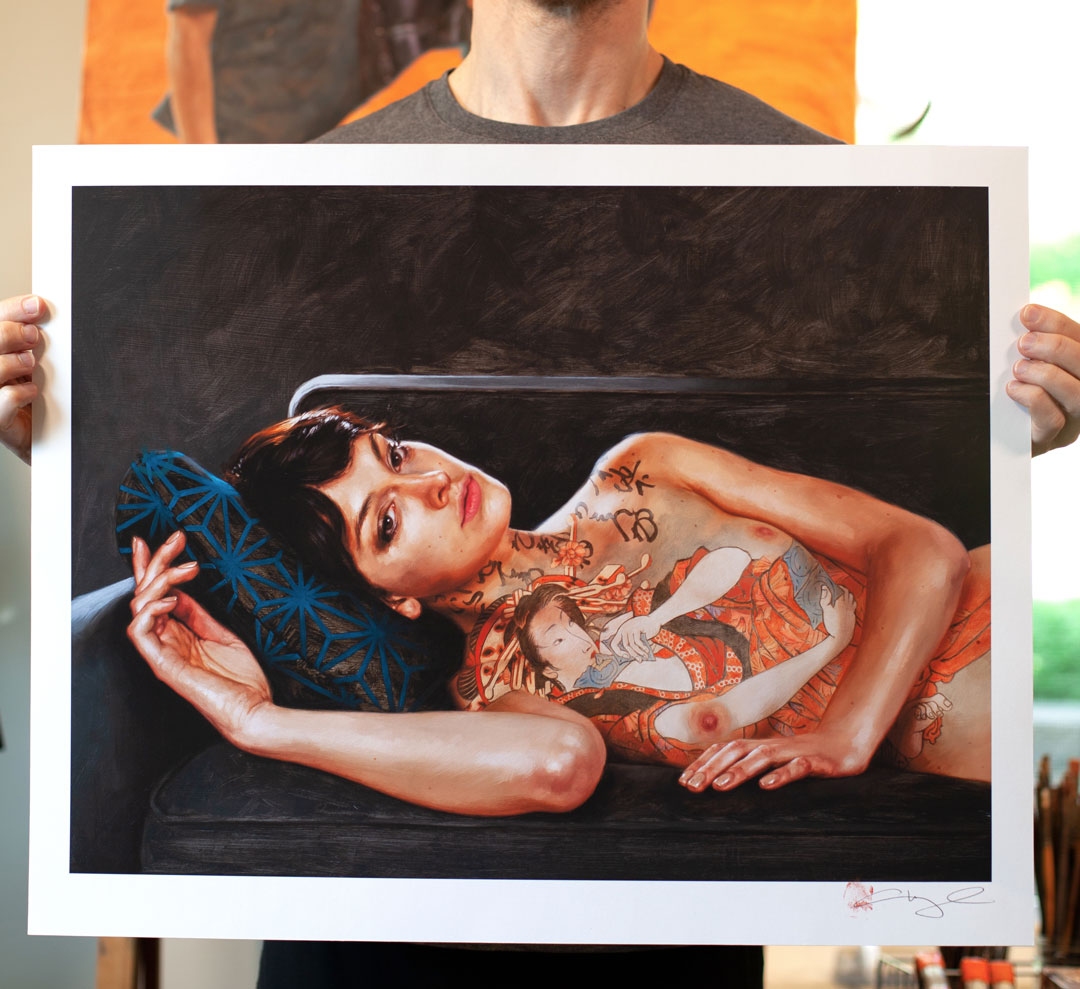 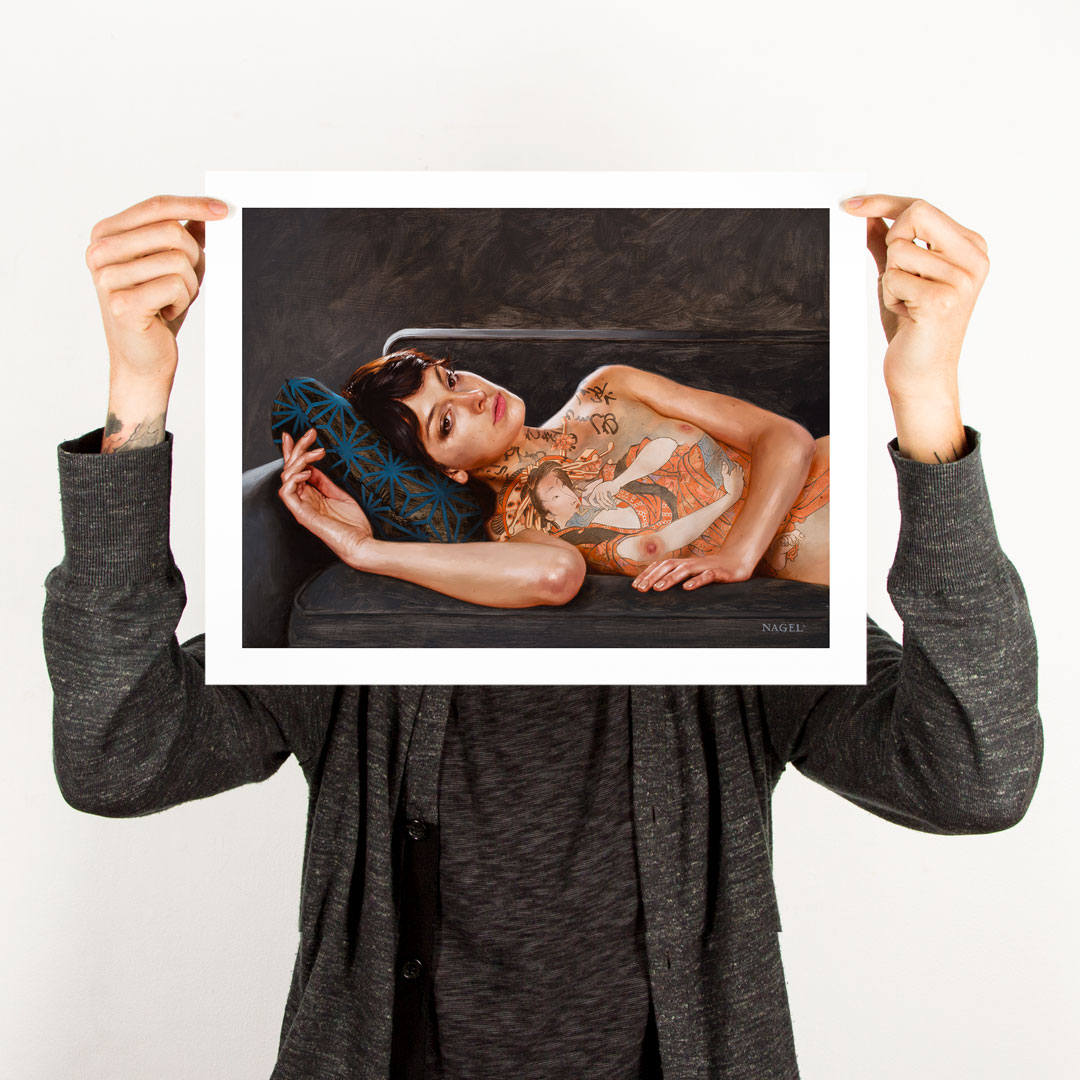 1x:  What have you been up to over the last year? Bring us up to speed on how things have been going recently for you since our last release…
Nagel:  I had two larger shows last year, in New York and Denver. For weird scheduling reasons I couldn’t help they were a little too close together and preparing for both was super super tough. I seem to be progressively working slower and slower, so painting enough for both shows, working my other two jobs, and trying not to be a total mess really took a lot out of me. So for the last 6 months I’ve been working slower and taking my time. I don’t have any larger shows on the horizon for the moment which has allowed me to take a few commissions and just generally focus on getting better. I’m also enjoying the process a lot more.

1x: What are some of the ways you have been trying to push yourself with your work over the last year?
Nagel:  Mostly I’ve been trying to work outside of my comfort zone and spend a lot more time thinking about paintings, instead of just painting them. I’d like to work on some new stuff conceptually so I’m spending a lot of time invested in what that’s going to look like.

1x: What was the last piece of art that you bought?
Nagel:  I bought a painting from Mike Dorsey who is both fine artist and tattoo artist in Ohio. He does modern ukiyo-e style paintings – actually kind of in the same vain as the era of Masami Teraoka’s work I referenced for this series. Lots humor and tons of skill in his work and I love it. I have two of his larger pieces and have to actively prevent myself from buying more.