1xRUN is thrilled to present the latest installment from figurative oil painter Aaron Nagel: a full-color hardcover book and print set! Collected Work 2008 – 2018 – Hardbound Art Book was produced, published, and financed entirely by Nagel himself. To celebrate, we’re partnering with the artist to release a limited number of signed books along with two exclusive print editions, Division and Tomb. Read our full interview with Nagel below, who describes his decision to self-fund, and emphasizes the importance of the artist-muse relationship.

1xRUN: Tell us a bit about your new monograph, what can fans expect?
Aaron Nagel: This is my first book, imaginatively titled “Collected Work 2008 – 2018”. It covers almost exactly 10 years of work, beginning with my first gallery shows. There are over 60 paintings featured, along with as many detail and progress shots as I could fit. I also tried to include some insight into the models whom I have worked with over the years, and what makes the artist-muse relationship so important. There are also secret codes.

1x: How long did it take you to put this book together?
Nagel: Aside from the 10 years it took me to paint all the work, the book itself took a little over a year.

1x: You financed this book yourself?
Nagel: I did! It was (and still is) a huge financial commitment, and often feels insane and entirely foolhardy, but it’s an investment in my own career and I am really happy with how it turned out. My original plan was to go the Kickstarter route, but I just couldn’t get comfortable with asking people to finance it, even though I have no problem with the crowdsourcing model. I’ve written in detail about my decision to self-fund on my blog, which may be of particular interest to any other artists out there who may want to embark on a book project. 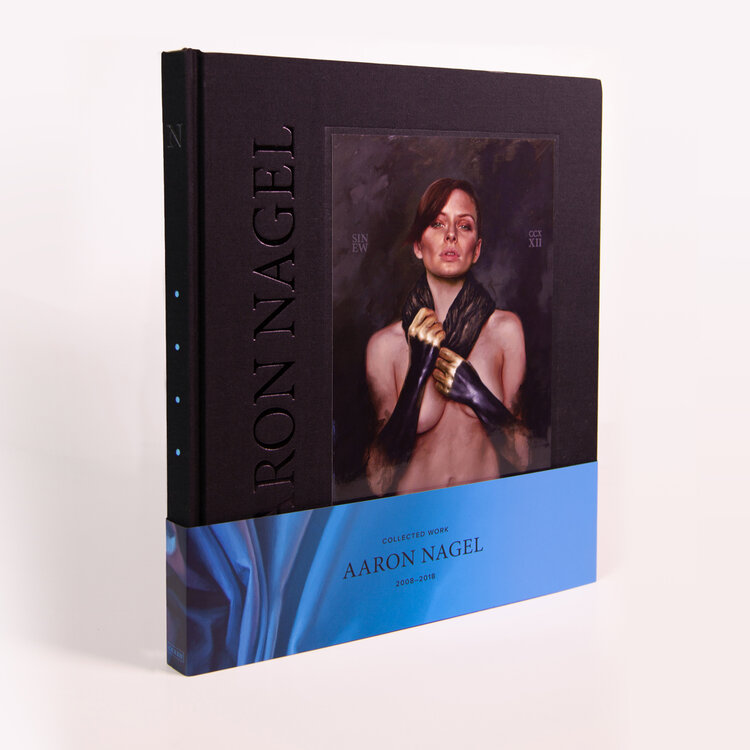 1x: What are some of your favorite aspects about the book?
Nagel: I did my best to make the book as much mine as possible. So not only the paintings, but the design, the writing, the pictures are all very much me. (Or as much me as I thought people would tolerate). I’ve seen a lot of art books that are just collections of an artist’s work, without much personality behind the book itself. Those are nice too, but my favorite art books are the ones that give the reader a glimpse into the artist’s head, where every aspect of the book feels like it came from one person.

I also really enjoyed being able to include some of the models I’ve worked with over the years. The artist-muse relationship is so important and it’s not a topic I’ve seen covered in any other art book. I try and communicate how much collaboration goes into the reference material for a particular painting and how grateful I am to have such good people to work with.

1x: Let’s also talk a little bit about each of these pieces. Anything immediate you would like us to highlight about these two print editions?
Nagel: These two do a really good job of representing very different time periods of my painting. Tomb was part of a series where I painted the same model on the same couch three different times. These pieces were all large scale and painted with very warm flesh tones on cooler backgrounds. As compared with Division, Tomb is much more loosely painted — bigger brush strokes but few layers.

Division was part of my last big solo show in New York in 2018. There is a lot more detail, and a lot more color temperature variation. This piece was also one of my first forays into painting fabric.

One thing I cover in the book is a change in technique I implemented somewhere around 2016. It was an almost unintentional adjustment but it really altered the way I approach painting figures. It’s something most people probably wouldn’t even notice, but to me, these two are great before-and-after examples of that change. 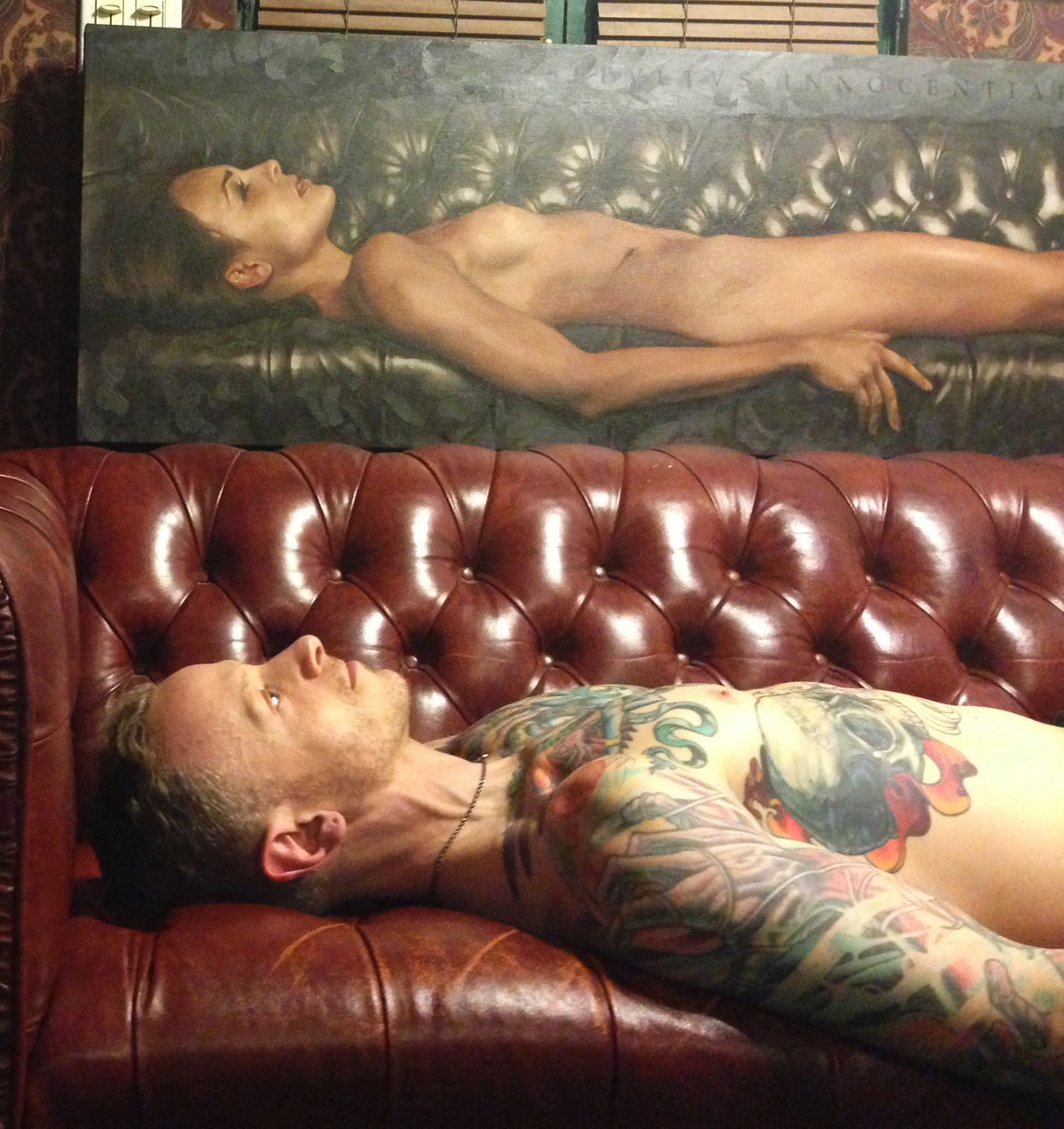 1x: What materials were used to create these original pieces?
Nagel: Both pieces are painted with oils. Tomb is on canvas, Division is on acrylic composite material (DiBond, or ACM), which is almost exclusively what I paint on these days.

1x: When was each originally drawn/created?
Nagel: Tomb was done in 2012, Division in 2018. Coincidentally, they were both painted for solo shows at Lyons Weir Gallery in New York, just several years apart.

1x: Tell us how the idea and execution came about for this image.
Nagel: Tomb was directly inspired by a painting by Hans Holbein called The Body of the Dead Christ in the Tomb (1520-22). It’s one of my favorite paintings and depicts Jesus in the tomb, clearly very dead and rotting. Every time I look at images of the painting, I want to do another version of my own. My earlier work dealt a lot with taking traditional religious iconography and repurposing it for my own means. I feel like it’s even more heretical to make comments about the existence of a higher power by repurposing imagery that was very much for it, and I like that. It’s heresy +.

Division is a little less lofty in its goals. My main concerns here were capturing some unconventional lighting, and to use fabric to provide a sort of unending landscape that the model was a part of. To me, there’s a sort of futuristic vibe to this one, with that inexplicable horizontal light source and the model’s wardrobe. This is something I hope to experiment with more in the future.

1x: How long did each of this image take to create from start to finish?
Nagel: I can’t quite remember with Tomb, but the aforementioned technique change did a lot to slow down my process. I would guess Tomb took a few weeks at most. Division took probably closer to two months, with a lot more time still going into the planning and reference work.

1x: Why should people buy this one of these prints?
Nagel: Because you have to have them! Art makes things better, and I wholeheartedly support bringing more beauty into the world (despite the fact that I may personally benefit in this instance). The more complicated answer is that I can’t really afford my own original art — it’s one of the great ironies of being an artist. But I am a collector, and a fervent supporter. So prints, books, and trading work are the more accessible means of keeping up that patronage. It’s important!

1x: What have you been up to over the last year? Bring us up to speed on how things have been going recently for you since our last release.
Nagel: My last six months have been almost entirely taken up by the book project. The pain of doing everything myself is that I have to do everything myself! So now that the book is out, I get to learn how to sell the thing. I’m thrilled to have it done, and the book turned out exactly as I wanted, but it’s been a huge undertaking and it’s still keeping me pretty busy.

“division” in some nice dusk light at @abendgallery in 2018. always interesting to see paintings with some natural light on them. FedEx tried to kill this one but she lives on!! #abendgallery #alsosomekittens

1x: What are some of the ways you have been trying to push yourself with your work over the last year?
Nagel: I can get a little preoccupied with trying to paint better and improve my technique, which sometimes means I don’t spend as much time on reference and concepts as I should. So I’ve been trying to spend a lot more time thinking about what I want to be painting from a conceptual or narrative standpoint. Technique will always be there for me to improve upon, so I’m trying to push myself in the areas that I’m not as comfortable with.

1x: What are some strides you feel you’ve made in your work recently?
Nagel: I’ve been trying to work outside of my comfort zone a bit. Most recently that means doing some very small pieces, which is something I don’t have much experience with, but I really enjoyed. I’ve also been taking steps to collaborate more with photographers and other creatives on photo reference, so I can push the concepts and narrative in the painting.

1x: What was the last piece of art that you bought?
Nagel: I was able to get a large Mike Dorsey painting last year that I love. I am also about two sessions away from completing a back piece by tattooist and good friend Andre Malcolm. While I’m only slightly hesitant to put my butt on the Internet, I’ll definitely post a shot when it’s complete. So, you know… watch out for that?

1x: Do you have any big shows or events coming up that you’d like to share?
Nagel: Not as of yet, but I’m hoping to get into a new series very very soon.