We are excited to announce the first release in the POW! WOW! x Thinkspace x 1xRUN print series with Aaron Nagel’s latest edition Battle! For the past 3 years Thinkspace has brought a massive group show out to Hawaii for POW! WOW! : Exploring The New Contemporary Movement exhibition, showcasing nearly 100 artists that make up the diverse contemporary scene ranging from traditional painters to sculptors to illustrators to graffiti writers and beyond. For the first release in this continuing showcase we welcome 1xRUN alumni Aaron Nagel with his latest Battle. Read on to find out more… 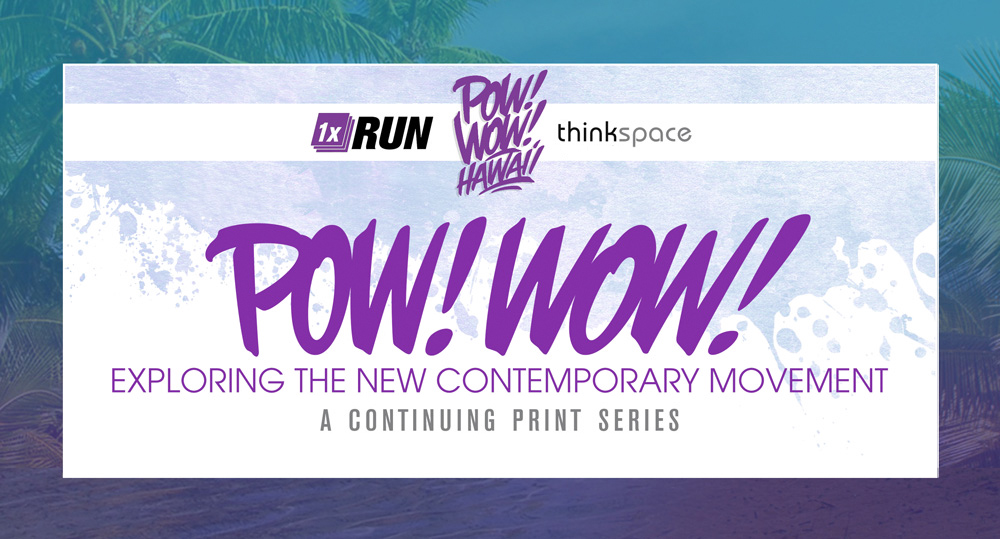 1x: Tell us a little bit about this painting, when was it created and what materials were used?
Aaron Nagel:    This piece, called Battle is a small one for me, and relatively simple. It was painted for the POW! WOW! Hawaii show curated by Thinkspace Gallery back in February, 2016.   The original painting was created with oil on a prepared DiBond panel. I actually have the specific dates for this one: I started January 5th and then it was finished and varnished January 19th, 2016. 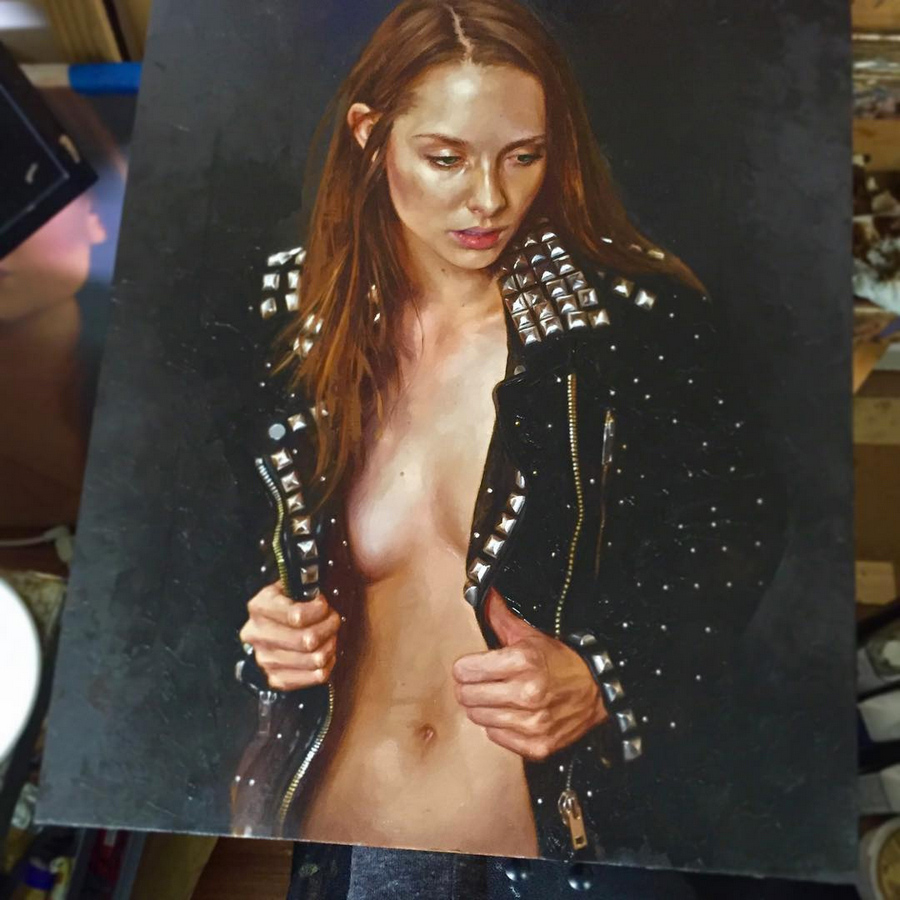 1x: Anything immediate you would like us to highlight about this piece?
Nagel: There’s no boobs in this one! (I’m kidding…but also, not.) It’s called “Battle” because it reminds me of the battle jackets metal dudes wear, covered in spikes and patches of band names you can’t read. I wish I could pull one of those off. 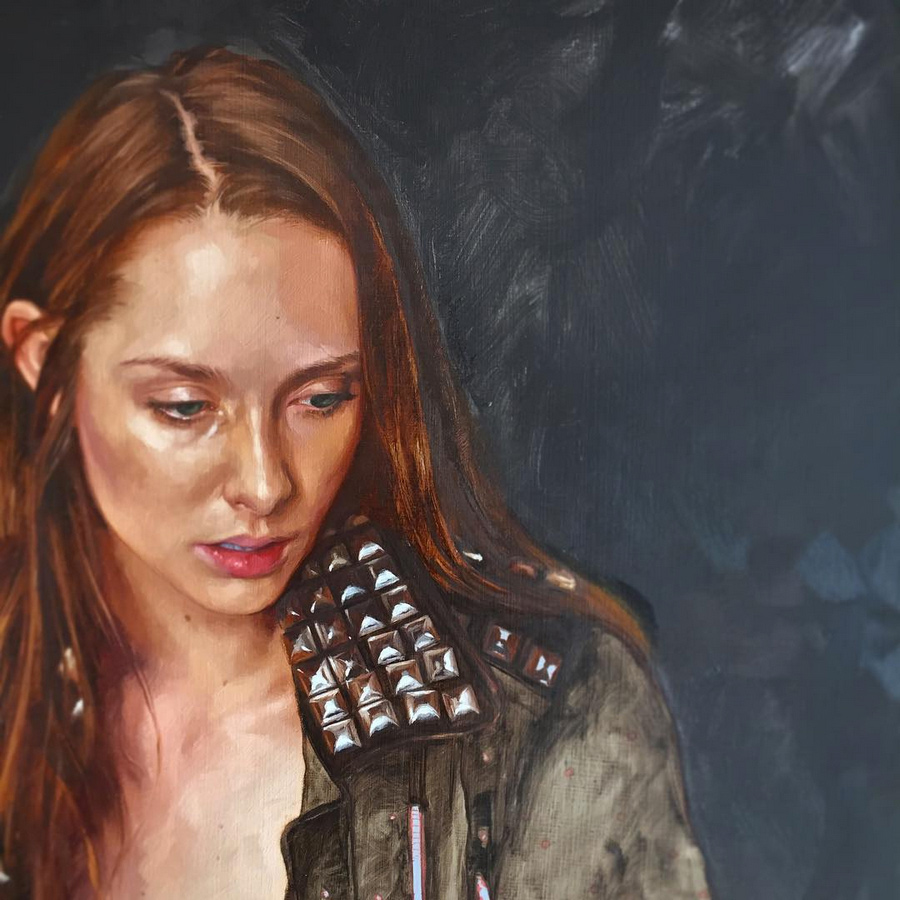 1x: Tell us how the idea and execution came about?
Nagel:    This one was very organic actually. It was my first shoot with the model, and I asked that she bring some stuff that might be fun to paint — which is a terribly vague request to make of somebody that isn’t a painter. She came wearing this leather jacket with traditional pyramid studs, and also these little metal dots (for lack of a better word.) I was super into it so we started there. I think the reference shot I ended up painting was really early in the session, and I don’t think I did any work in photoshop to come up with the final comp. 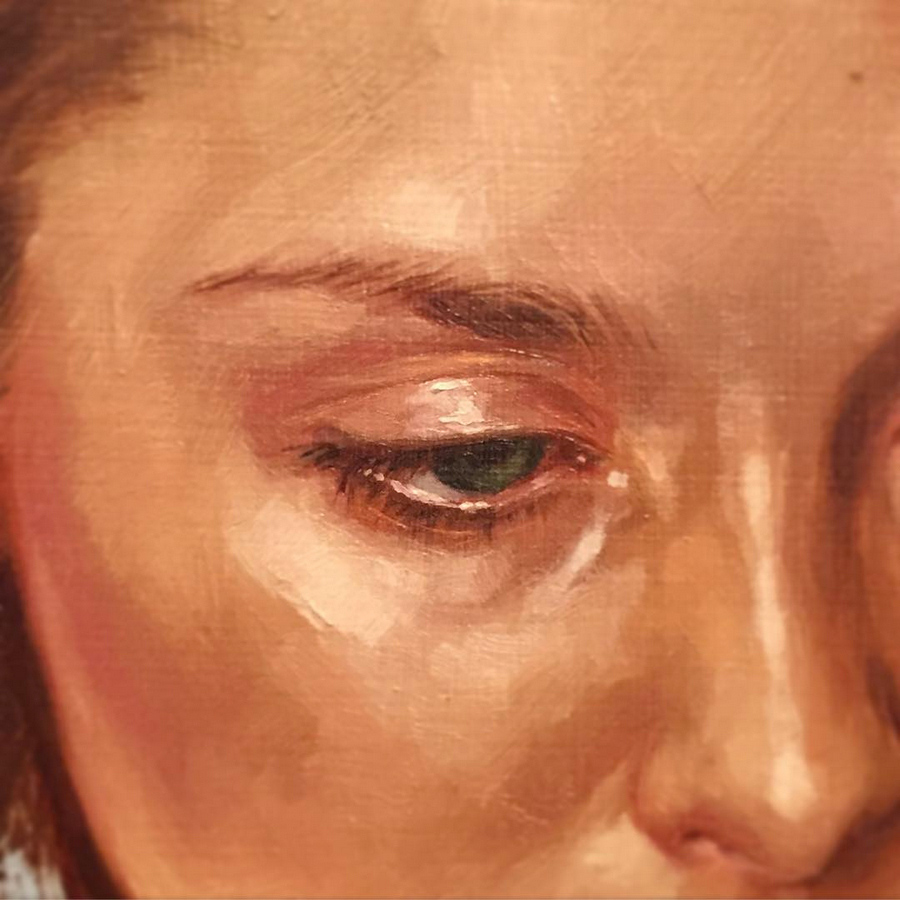 1x: What is unique about this piece compared with some of your other work?
Nagel: Probably it’s simplicity, and I very rarely paint clothing that so obviously belongs to a certain time-period or genre.

1x: Why should people buy this print?
Nagel: Same as all the others: it’s art, but you still might need it. and let’s be honest, supporting the arts, and artists like me — so that we can eat and pay rent, that’s really cool. 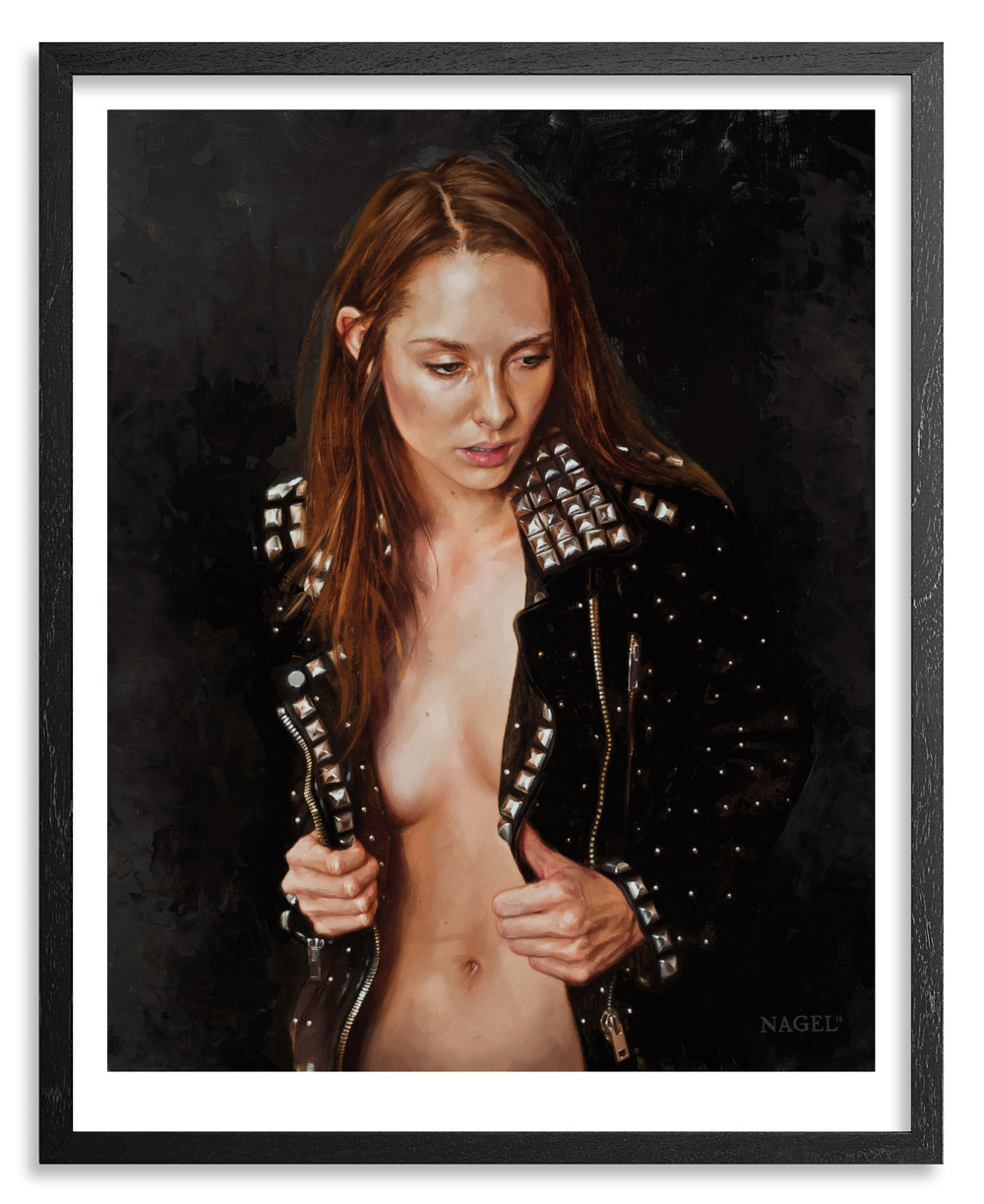 1x: Tell us about the model in this piece, you have painted her several times, anything in particular that brought this model for this painting or vice versa?
Nagel:    The model for this piece is Bailee MyKell, who I have since painted a bunch, but this was actually the first larger piece I did of her. I got three larger paintings and a study from the first shoot we did, which is much more than I usually get with a model I haven’t worked with before. It usually just takes some time to learn what each other want and can deliver, but we happen to work really well together.   Jamie Heinrich, a fantastic filmmaker, is doing a video series on my process, specifically the reference shoots that should be out relatively soon. He documents a shoot with Bailee for a painting I’m currently working on, and it’s a cool peak into the process, and totally fascinating to see Bailee work on film. 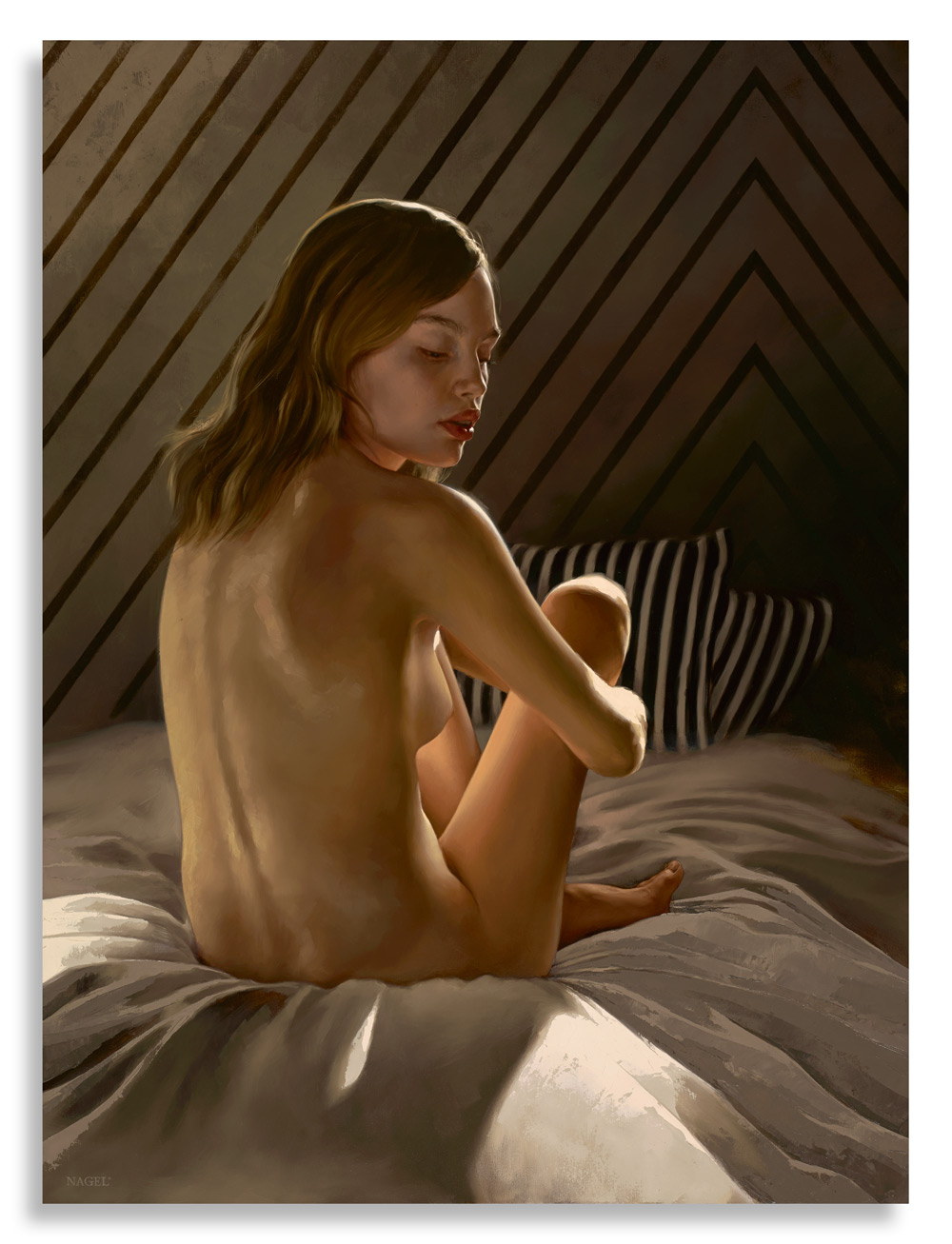 1x: For you personally is it easier to paint larger pieces or smaller pieces? What are the advantages of each?
Nagel: There are advantages and disadvantages to both. Sometimes a larger piece demands a more dramatic and powerful image…they seem a little less forgiving than a smaller piece where there isn’t as much actual space to fill. A background on a piece like Battle has a lot going on even though it’s essentially just a texture built up with pallet knives — but it doesn’t work as well (for me) on a larger piece, where even the background feels like it should be very purposeful. conversely, nothing really beats the presence a huge oil painting has. so provided the image and composition are right for it, a large painting up on a wall has a depth and magnetism that smaller paintings rarely have. 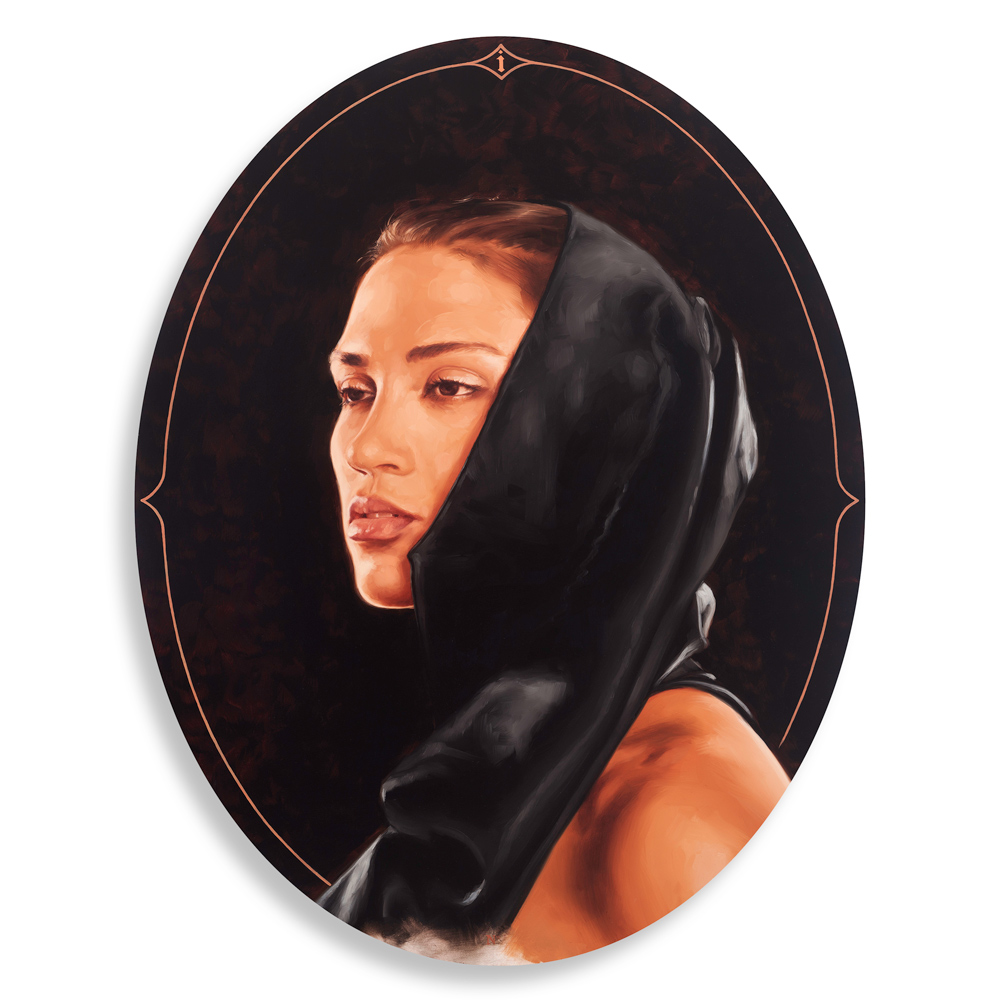 1x: What role have studies played in your work?
Nagel:    I do a lot of digital compositions of the reference material on my computer. I move body parts around, play with colors, composition, additional elements, etc. I rarely do painted studies or drawings of a piece before I get into it, but I do like to do at least one portrait of a new model before I work on a larger piece. I find it really helps to learn a face, even though i’m always using reference, the more I paint somebody the better. It also helps to play around with expressions, eye contact…simple stuff that plays a huge roll in how a larger painting feels.

1x: What strides do you feel you’ve made in your work recently?
Nagel:  Yeesh, who knows. I feel like the paintings are getting better, but they’re getting harder to make — and I’m more critical of them. I am happier with the balance between loose and rendered when it comes to figures. 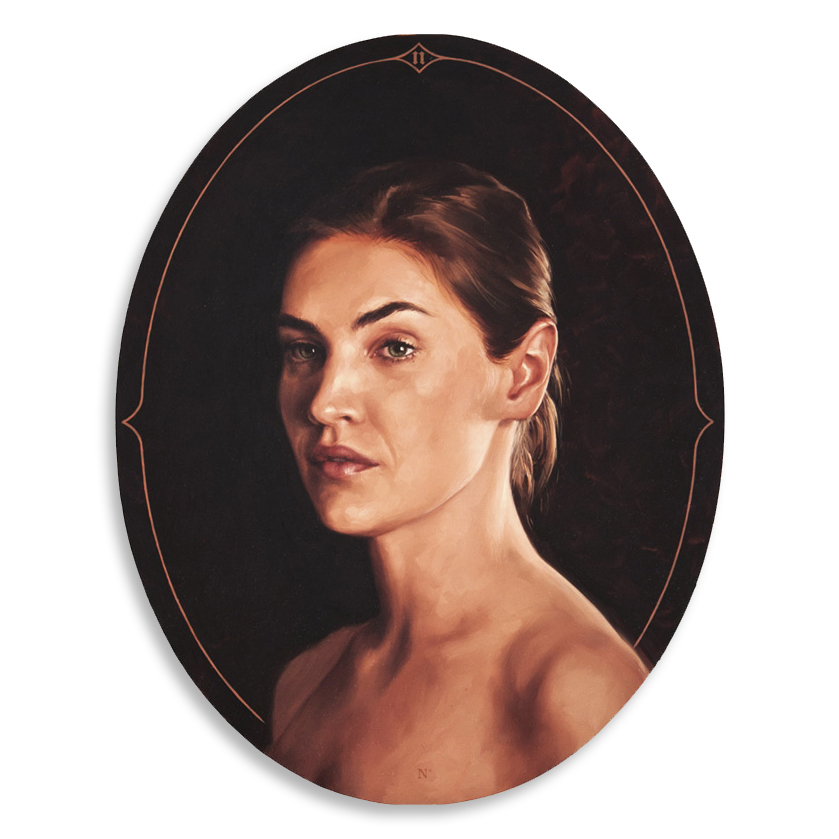 1x: Are there any artists new or old that you’ve been finding inspiration in as of late?
Nagel: I’m always looking at Sargent stuff, and studies by Jeremy Lipking and Sean Cheetham. those guys are all shredders. I’ve lately got back into researching a lot of Japanese ukiyo-e art, and the artists that are still working that way today.

1x: Any other big upcoming plans you want to share?
Nagel:  I’ve got a lot of group show stuff happening this year, and a solo in NY Feb 2017. and hopefully some good paintings.