Longtime 1xRUN artist Ana Bagayan returns with her latest Release available in standard and hand-embellished variants! Created in July of 2016, this piece would become the starting point for her exhibition Into The Void at Takashi Murakami’s Japanese gallery. A chance encounter in Seattle with Murakami would lead jump start this painting and the show and find Bagayan pushing herself and taking new risks in her latest body of work. Read on as Ana Bagayan breaks down Release and brings us up to speed on her progress over the last year. . .

1xRUN: Tell us a little bit about this piece, anything immediate you would like us to highlight about this image?
Bagayan: This painting is called ‘Release.’ My artwork usually mirrors the circumstances in my life and how I feel at the time of creation. This one is about accumulating negativity from stress and anxiety and that moment when you let it all go and transmute that energy into something beautiful. I used the butterflies symbolically to represent transformation and also the mental ‘fluttering’ of thoughts.

1x: Was this image part of a recent theme, series or show that you had? If so how did it fit into that given grouping?
Bagayan: The original painting was created in July of 2016. During this time, I had been traveling by car with my husband and two dogs on a long-term road trip around the USA and Canada. It was the beginning of the road trip, when things were still new and scary. We had been experiencing some set backs while trying to enter Canada from Washington. Our car kept breaking down and we were feeling stuck in Washington for about two weeks and not understanding why there was so much resistance.

Then something strange happened. As we decided that we were going to take the risk and just cross the border, I got a message on Instagram from Takashi Murakami asking me if I would do a show at his gallery in Japan. He had curated a show with Juxtapoz Magazine in Seattle and was on his way to Washington for the opening. He asked if I could meet up there and discuss our plans. We were moments away from going into Canada and suddenly everything made sense. I was stuck in Washington because I needed to be there for something important that I didn’t expect. We turned around and drove back to Seattle.

‘Release’ was the first painting I made for my solo show ‘Into the Void’ and it set the tone for the rest of the artwork. I started working on it in my hotel room near Seattle once my show was confirmed and soon after, our car was fixed and we were on our way to Canada. The theme of my show was about what happens when you take a risk and pursue your dreams without knowing how it will all work out.

1x: What materials were used to create this original piece and how long did it take to create from start to finish?
Bagayan: The original is oil paints on wood panel. I worked on it in several sessions in various locations during our road trip. A hotel room in Seattle, a campsite in Canada, and the rest is kind of a blur.

1x: What is unique about this piece compared with your other work?
Bagayan: Its the first time I painted yellow eyes. 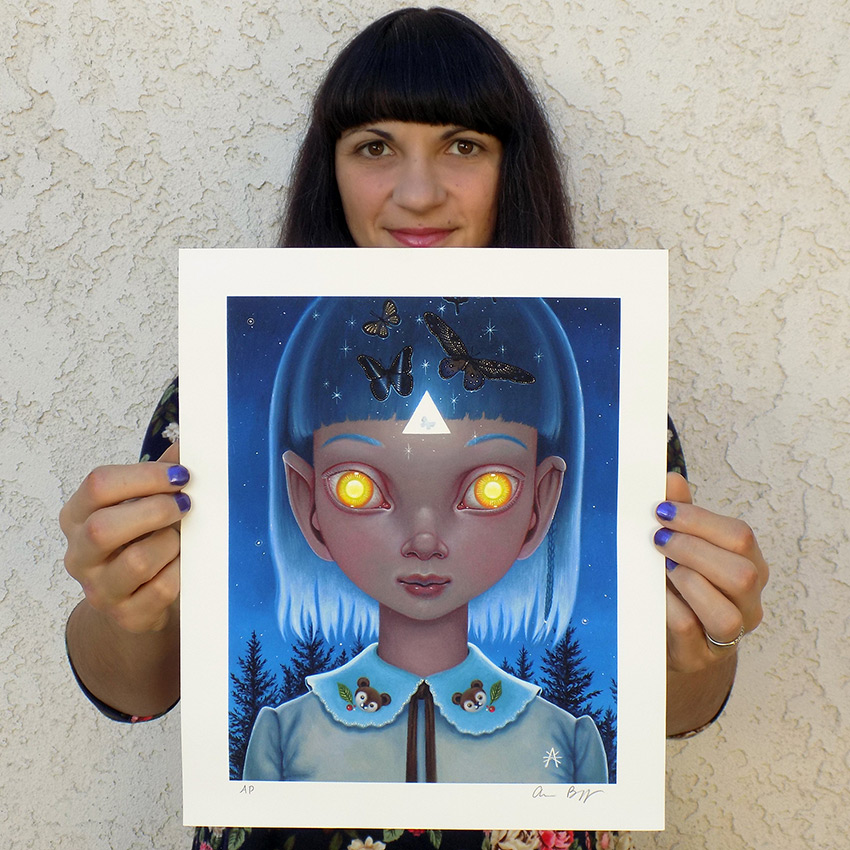 1x: Why should people buy one of these prints?
Bagayan: If they like my artwork, its a great way to show support. As for the hand-embellished prints, I used an iridescent soft gold paint to highlight the print and it adds a new dimension to the image. The hair and eyes glow and the butterflies sparkle as you walk past it! I also highlighted my signature symbol on all the prints so even the regular edition has a special touch. 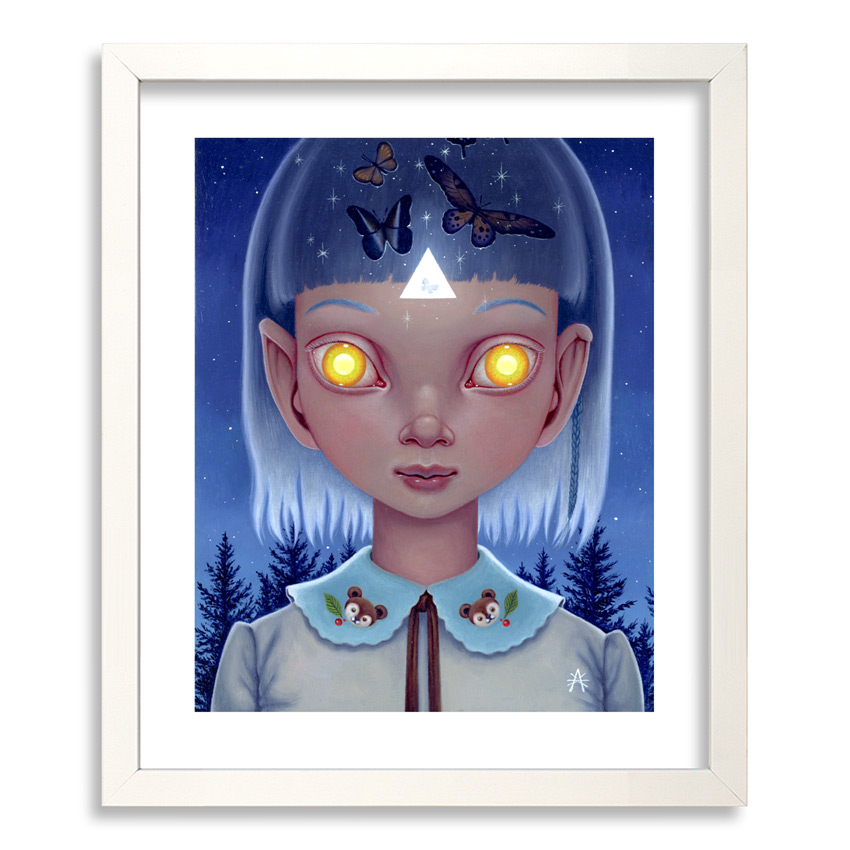 1x: What have you been up to over the last few months? Bring us up to speed on how 2017 went for you?
Bagayan: Early 2017 I was in Florida for the winter, still working on my show and traveling. I got to visit the Florida Keys before the recent hurricane, which I’m grateful for. Then we headed back west to Arizona to wrap up our road trip and finish the final three larger paintings from my show. In June, my husband and I flew to Japan for my opening reception, which was surreal.

1x: Any recent shows or exhibitions that you had?
Bagayan: I just had a large painting on display at Complex Con last weekend. I will also have some artwork in upcoming group shows in Los Angeles this year.

1x: What are some of the ways you have been trying to push yourself with your work over the last year?
Bagayan: Working while traveling on a small budget and without a proper studio was a big challenge for me. You can make plans but rarely do they pan out as you think they will. I had to look for and seize any opportunity to paint while traveling. Sometimes it meant not sleeping so I could catch up to the schedule I set for myself, sometimes it meant painting in the front seat of the car with flashlights hanging overhead. I still don’t know how I did it, but I did it.

1x: What are some strides you feel you’ve made in your work recently?
Bagayan: Now that I’m back in Los Angeles and have a place to work, I’m using this opportunity to work on my largest paintings for my next show, which will be in Germany at FB69 Gallery in 2018.

1x: What was the last piece of art that you bought?
Bagayan: I don’t know if this counts but I just bought a Mr. Sparkle toy from MartianToys.com I couldn’t buy anything while traveling because I didn’t have a place to put it.

1x: Do you have any big shows or events coming up that you’d like to share?
Bagayan: My next solo show will be in Germany at FB69 gallery in 2018.