Brazilian artist Arlin just recently made the move to Detroit, and we are excited to welcome to the city and for his debut RUN Liberdade Abstrata featuring two new editions featuring his now signature style. Arlin’s new editions coincide with his new exhibition of the same name that opens at 1AM San Francisco on November 18th. Read on as Arlin gives us the background on Liberdade Abstrata, his background and much more… 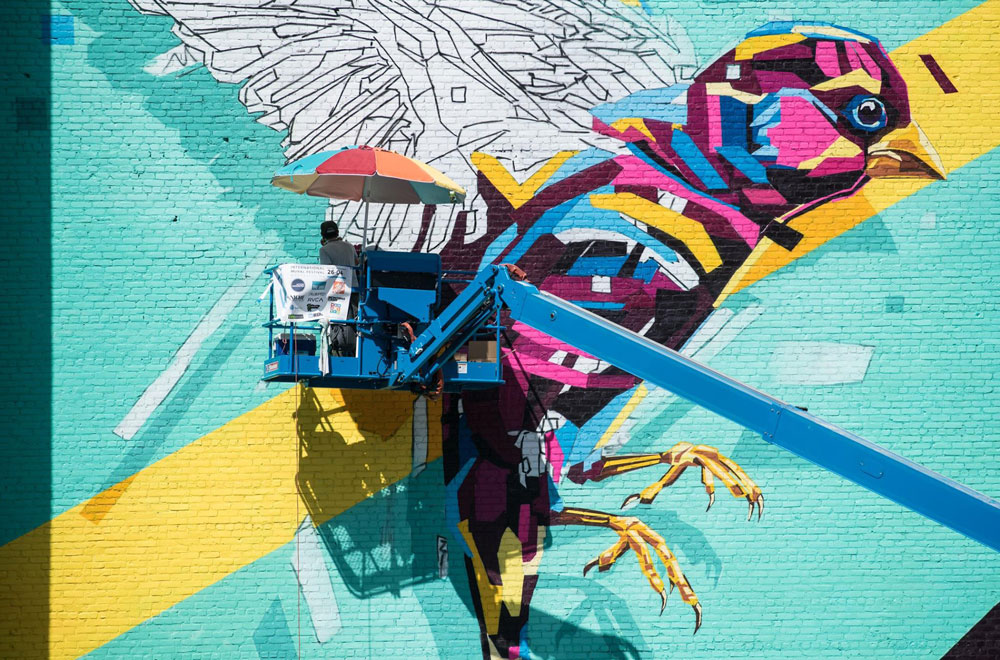 1x: Tell us a little bit about this series, are they part of a recent theme, series or show that you had? If so how did it fit into that given grouping?
Arlin: The pieces are part of my upcoming show, “Liberdade Abstrata” or in English, Abstract Freedom. The show is composed of birds and geometric designs.

1x: What materials were used to create these pieces?
Arlin: They are based from be playing with geometric wooden pieces as a child, and now I’ve created these designs using Photoshop where I study colors and shapes to create each print.

1x: When were these pieces created?
Arlin: These pieces have recently been designed as a function of my show, but the series is something I’ve been building up to for a while. 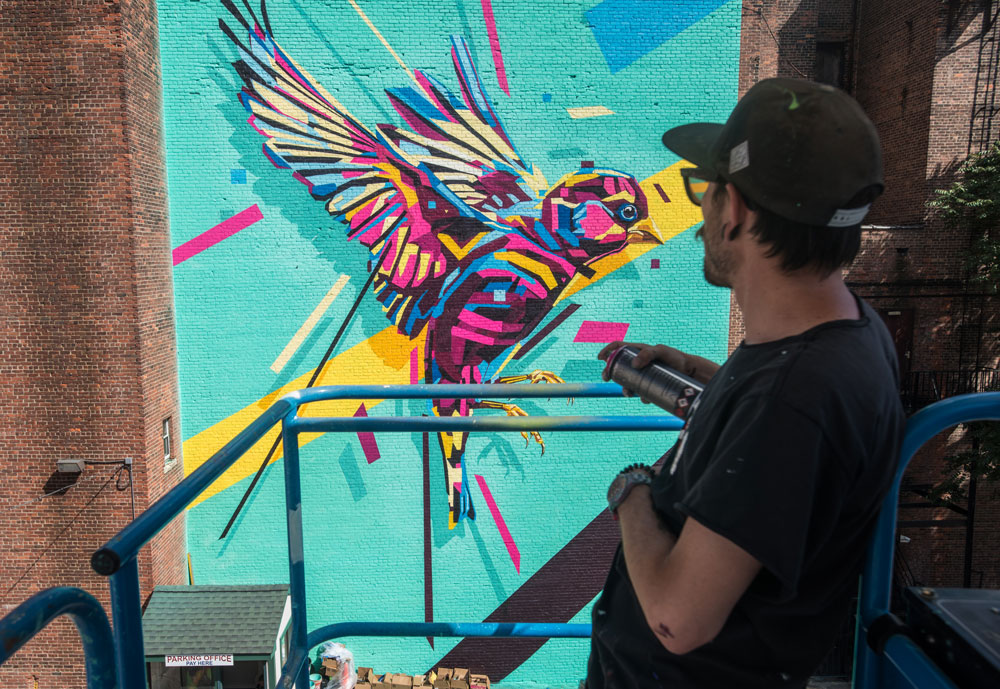 1x: Tell us how the idea and execution came about for this body of work?
Arlin: The whole idea is based on my childhood when my house in Brazil was full of birds in cages, a common thing in Brazil. My father had several types of birds and he kept them all in cages that he built with his own hands. I was never able to understand why these beautiful creatures with wings made to fly should be locked up in a cage.

1x: How long did each of these pieces take to complete?
Arlin: It took about 10 days to design each print. My process is meticulous and slow. It’s a process of trial and error until I get a result I’m satisfied with. I create each individual piece and design as if I’m putting together a Lego creation.

1x: What so you feel is unique about this series compared with your other work?
Arlin: Liberdade Abstrata is my first full series of animals. My work has evolved over the past few years from working with just abstract geometric designs, to using geometric pieces to create forms, in this case birds, that are composed of life and movement. 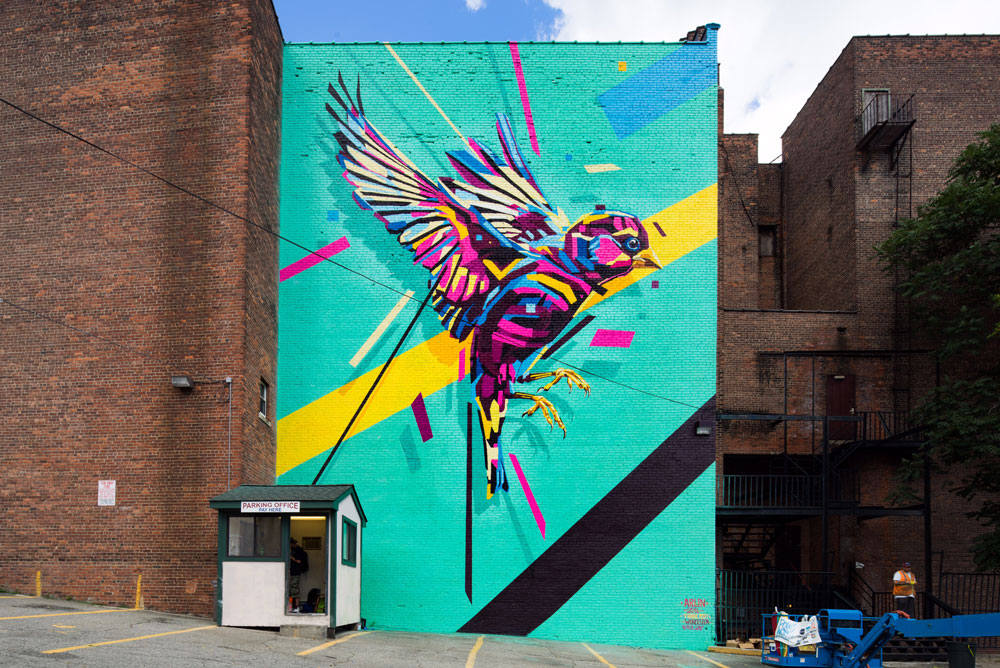 1x: Why should people buy one of these prints?
Arlin: Each person has a personal reason based on what moves them. I wanted to include prints in this exhibition because it’s a more affordable way for someone to have a piece of the work rather than purchasing an original piece of canvas. Also, whenever I travel I talk to people about my concept, and 100% of them are able to identify with a part of it. No one wants to live arrested in cages. Everyone wants to fly over miles high and far, but unfortunately society creates invisible cages for people. Whenever someone buys a print 50% of the time it’s for gifting. In this case, it could be to give to someone that needs a bit of extra courage to fly out of their comfort stage of life. 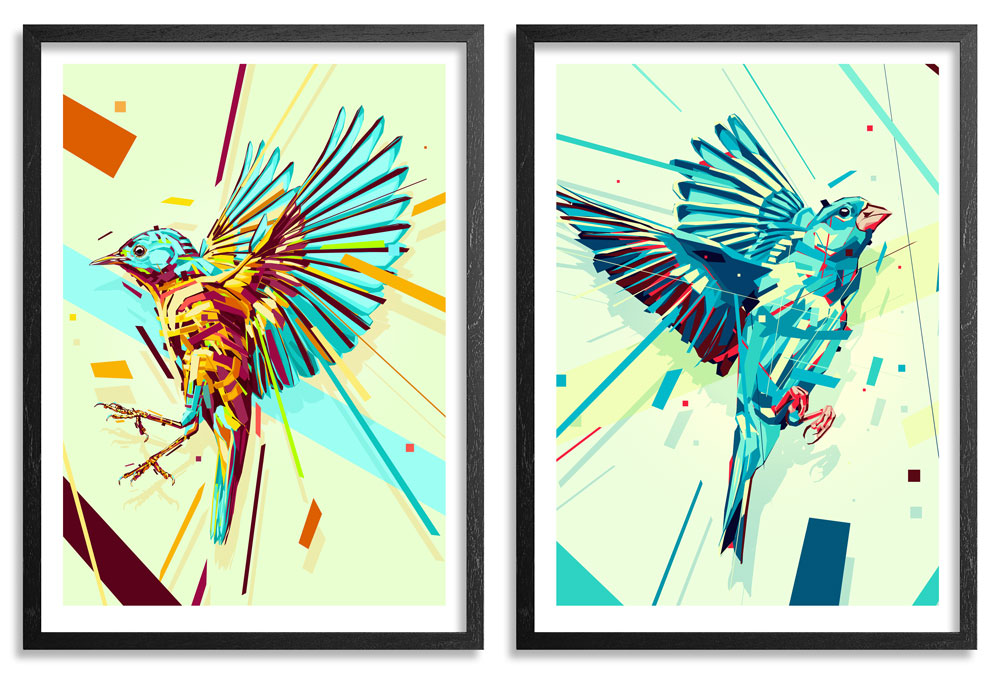 Liberdade Abstrada I & II by Arlin – Click To Purchase

1x: When did you first start making art?
Arlin: I believe I’ve been making art all my life, but I went out and started painting with spray cans for the first time in 1999.

1x: What was your first piece?
Arlin: I do not know if it was my first piece, but I did a train car in the neighborhood where I grew up.

1x: What artists inspired you early on?
Arlin: The artists that inspired me early are the old school graffiti writers in Brazil like Zezão, Speto, Binho among others. A few years later most of them have become my personal friends and have shared what they know with me. 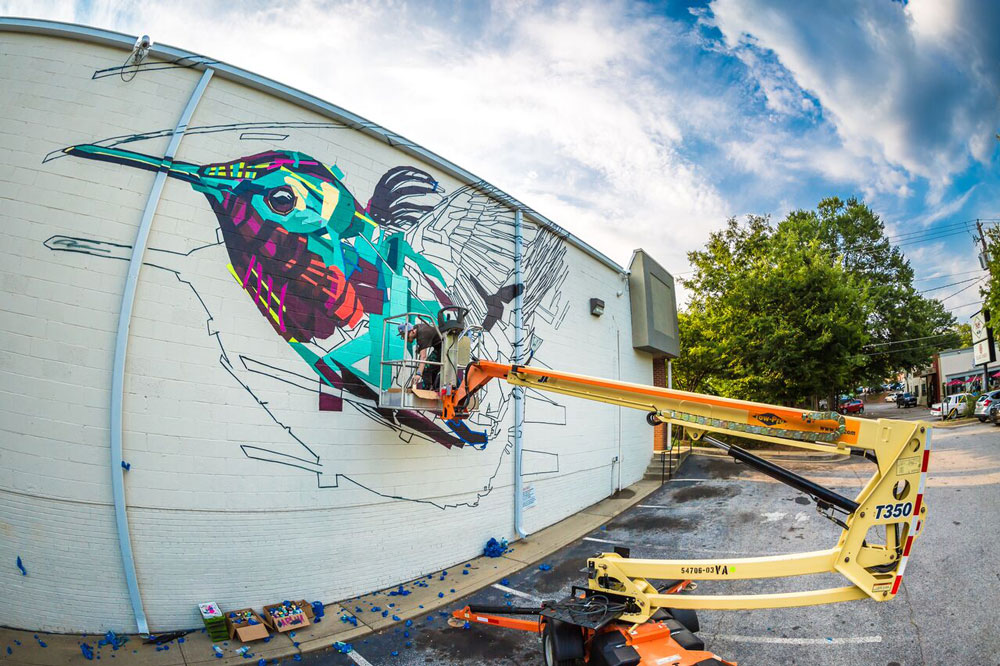 1x: What artists inspire you now?
Arlin: Those who inspire me now are artists totally outside the arena of street art. Artists who are not only big names in art history, but also who created their own style such as Kazimir Severinovich Malevich, Wassily Kandinsky, Piet Mondrian, Franz Marc, etc.

1x: What would you say your ideal environment is like when working? Do you listen to music, watch movies etc.
Arlin: Of course I listen to music. I can not have my creative environment without music. I have a serious challenge in staying focused, and music helps me with that. To paint, I only like music without vocals. Only instrumental, some examples are: Aphex Twin, Boards of Canada, Gold Panda, Bonobo, etc. 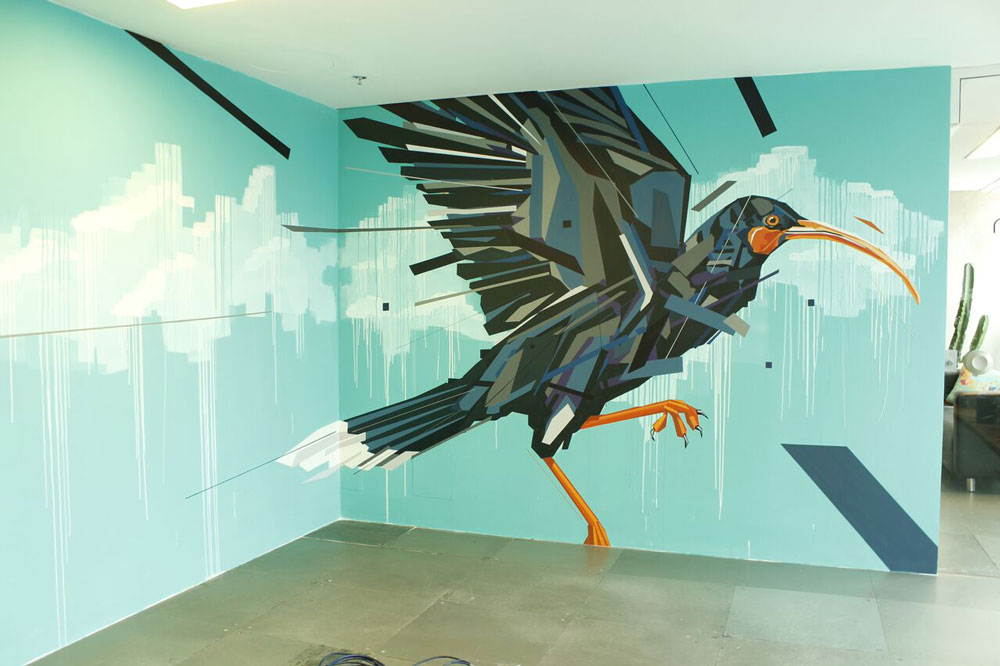 1x: If you could collaborate with any living artist who would it be and why?
Arlin: I would say my father. He is not conventionally thought of as an artist, but it was him who taught me to tinker with wood. He showed me art with new eyes and taught me to do this with other perspectives.

1x: If you could collaborate with any deceased artist who would it be and why?
Arlin: No doubt it would be Kazimir Malevich. He’s the guy who created geometric abstractionism. He can say a lot with his work without having to drill down to aesthetics. 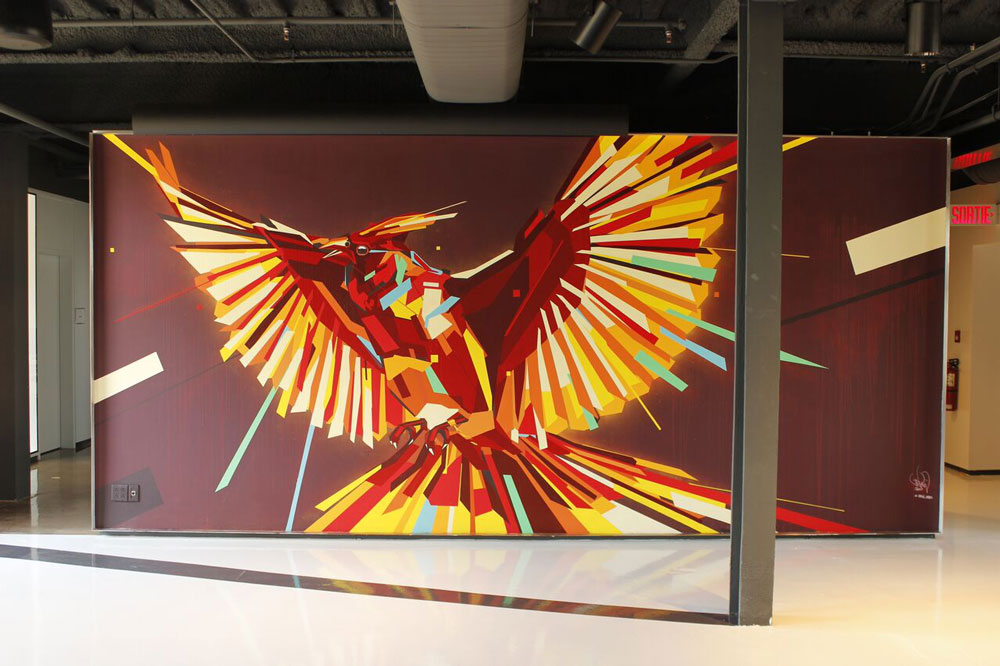 1x: What was the first piece of art that you bought? Do you still have it?
Arlin: The first piece of art I bought was a small piece of paper made by a pixador who traded with me in return for a subway pass in Sao Paulo. The story is a little crazy. In the center of São Paulo, there was always was a meeting of taggers. These guys are the kind of vandals that climb high buildings of the city to leave their tags. The popular name for this in Brazil is pixação. This guy stopped me and asked if I could buy him a ticket. We were talking and I told him I would buy his ticket if he designed his tag on paper for me. He didn’t think twice, and that’s how I bought my first piece of art. I probably still have it saved in my studio in Brazil. 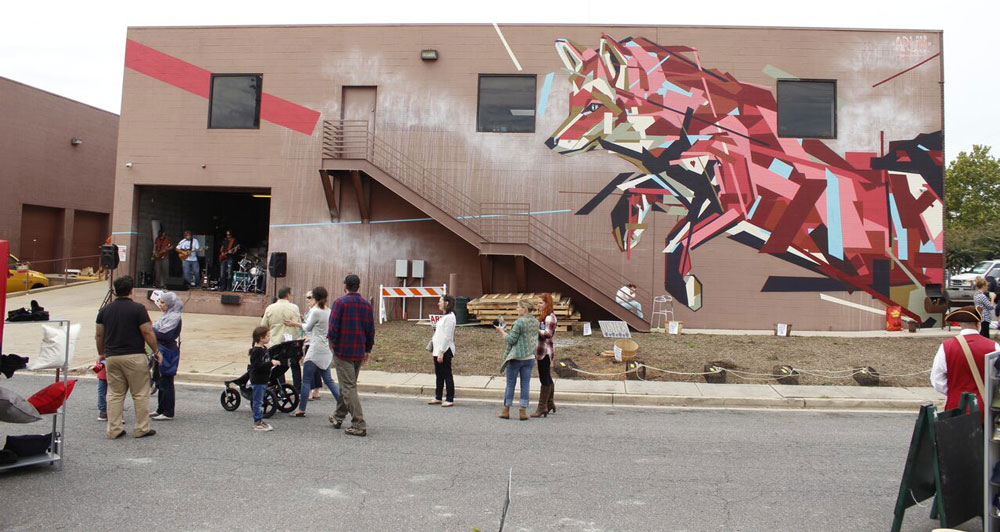 1x: What was the last piece of art that you bought?
Arlin: I haven’t really been acquiring a lot of things at the moment in my life. I’ve been traveling and moving from place to place. From Sao Paulo then to the US, California now to Detroit. Normally I exchange with other artist friends. The last trade I did was with my friend Sabek, a muralist from Spain.

1x: Any big shows or events coming up that you’d like to share?
Arlin: Yes, my next exhibition will be held in San Francisco at 1AM Gallery, Nov. 18 through Dec. 15.