Recently you may have noticed that Australian artist Scott Marsh made waves with his Kanye Loves Kanye mural in Sydney, Australia getting coverage on Reddit, Elle, Cosmopolitan, Huffpost, Vice, The Boombox, Buzzfeed and Perez Hilton just to name a few. Well, the saga continues as this past weekend Marsh painted over the massive 20 ft mural after it was sold to an undisclosed buyer, check out the full story with TheDailyMail and be sure to grab your copy of the 11×17 Inch Edition now before they are gone…

1xRUN: Tell us a little bit about this painting, is the original still for sale?
Scott Marsh: This mural is my painted interpretation of a meme of Kanye West kissing Kanye West, it’s located in Chippendale in Sydney, Australia. Chippendale is Sydney’s creative precinct. I am currently in the process of painting a 1 off studio version of this piece on canvas which will be for sale in the near future.

1x: When was this piece created and what materials were used on this piece?
Marsh: It was painted using a mixture of acrylic and spray paint. It was painted on the morning of Saturday 19th March and still stands.

Someone painted a 20 ft mural of my “Kanye kissing Kanye” photoshop. And with that, my friends, I quit the internet. pic.twitter.com/9mbryUiVLg

1x: Anything immediate you would like us to highlight about this piece?
Marsh: This work has become a glowing example of the power of social media, the Internet and modern cult of celebrity. Images of this mural have gone globally viral, it received over 2 million hits on its Reddit post, has been featured by media outlets such as Elle, Cosmopolitan, Huffpost, Vice, Buzzfeed, Perez Hilton and E! News to name a few. I have been told it is the first viral meme based artwork in art and meme history, whatever that means haha.

1x: Tell us how the idea and execution came about?
Marsh: It was painted on a wall which also featured a 20ft portrait of a Kim Kardashian nude selfie by Australian artist Lush, The Kanye Loves Kanye was painted to fit with Lush’s piece and create some noise, which it did. Both works receiving a huge amount of attention.

1x: How long did this piece take from start to finish?
Marsh: Approximately 4.5 hours.

1x: What is unique about this piece compared with some of your other work?
Marsh: This is the first piece of mine to receive a large amount of international attention. It’s also my first work in a body looking at absurdity of the cult of celebrity. It’s also bloody funny! 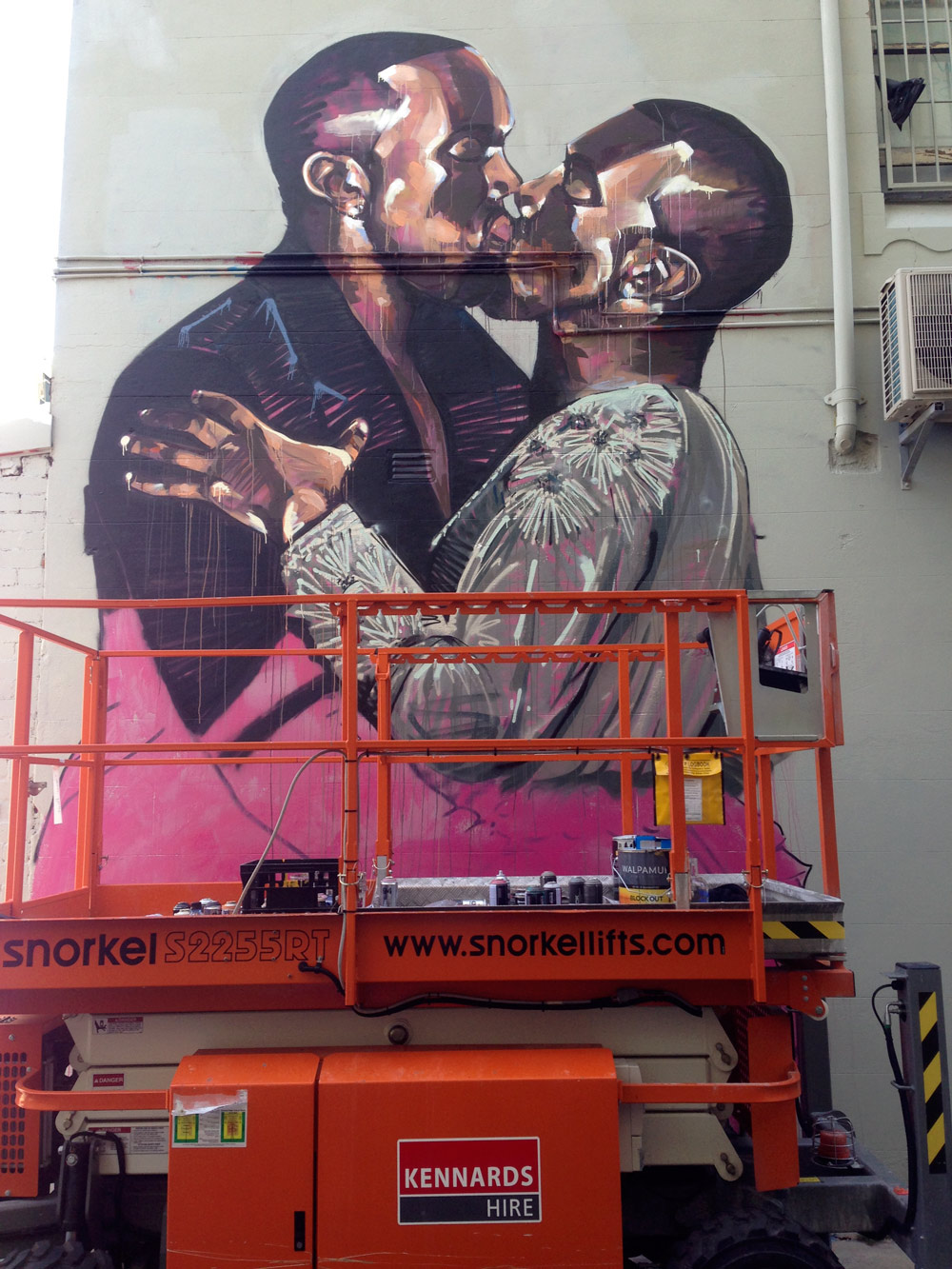 1x: Why should people buy this print?
Marsh: Because Cosmopolitan UK named it “The greatest artistic work of the 21st century,” it will make you laugh, and proceeds from this print will fund me a trip around America painting more murals like this one! 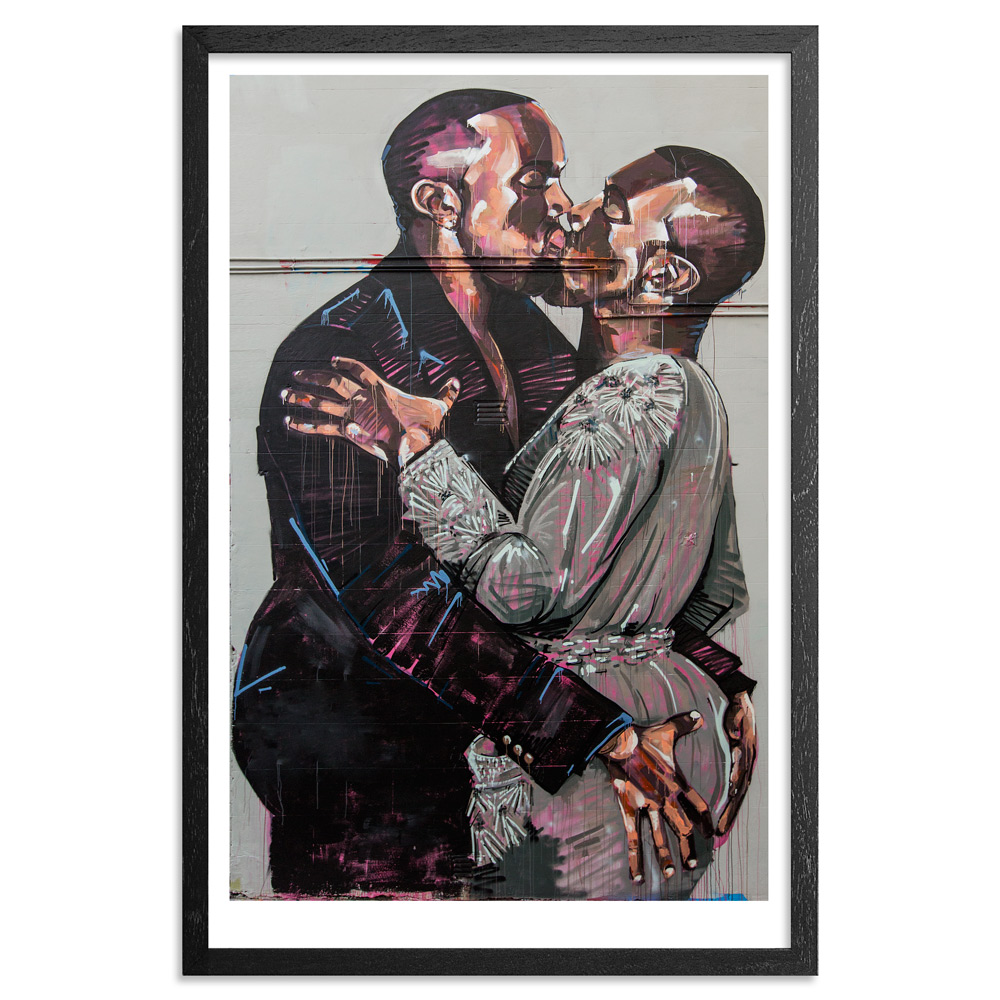 1x: When did you first start making art? What was your first piece?
Marsh: Art was always my thing as a kid, when I hit my teens I got super deep into graffiti and still am till this day, it was graffiti that kept my interest in art and being creative until I decided to pursue a career as a practicing artist in around 2011. My mum used to give me giant pieces of paper as a kid and I would invent and draw all these crazy monsters all over them, mum got one framed she still has it so I guess that would be it.

1x: What artists inspired you early on?
Marsh: In high school the closest thing I was could find to graffiti I was allowed to study was the work of Howard Arkley, an Australian artist who used air brush and bright colours which had a similar aesthetic to the graffiti I was doing at the time. I still love his work to this day. The work that influences me is super varied, other early influences include Francoise Nielly, Honore Daumier, Richard “Seen” Mirando & Adam Cullen.

1x: Do you listen to music while you work? If so what? If not then what is your environment like when you work?
Marsh: I usually listen to podcasts like Joe Rogan, Joey Diaz or Bill Burr. If I find a new song I’m into I usually just play it on repeat for days, puts me in a bit of a trance and I get a lot done.

1x: If you could collaborate with any living artist who would it be and why?
Marsh: Seen for sure, I’ve been sweating his stuff since I was a kid. In my teens/early 20s all I wanted to do was paint trains like Seen, it kept me involved in graffiti which ultimately led me to become an artist.

1x: If you could collaborate with any deceased artists who would it be and why?
Marsh: Brett Whiteley, I love his drawing style it would be an interesting fit.

1x: What was the first piece of art that you bought? Do you still have it? The last?
Marsh: It’s a tiny little Hand carved figure by Australian artist Shida, It was the only work I could afford when he had a show in Sydney. Yes, it sits on my desk. I haven’t bought any pieces but I have been doing trades with other artists who are friends or I meet during my travels. I recently traded with Nemco (Italy) and Kaos (Sweden) both pieces a super dope!

1x: How has 2016 been so far for you? What have you been up to?
Marsh: This year has been great. I’m focusing on getting out of the studio and painting a lot of walls. I set myself a lot of goals at the beginning of this year, everything is on track, 2016 is the year of the Marsh!

1x: Any upcoming plans for this year that you want to share?
Marsh: I’ll be in Europe painting murals all over for their summer and in the states after that for some other projects.