1xRun: Tell us a little bit about this piece, is the original still for sale?
Bec Winnel:  The original piece was created for an exhibition in Adelaide, but she didn’t find a new home until after the show. She now resides in the home of the director for artFido.

1xRUN:  What materials were used to create this piece and how long did it take?
Bec Winnel: She was created in December of 2012 and took about 25 hours. I mostly used coloured pencil along with pastel and white china graph.

1xRun: Tell us how the idea and execution came about?
Bec Winnel:  In my mind, I wanted to create a girl with fair features and hair. I also wanted to bring out her lips and eyes with some rich pinky tones. As I started creating my concept, she kind of evolved into a princess fairy that one would find at the bottom of the garden.

1xRun: What is unique about this piece?
Bec Winnel:  I guess I’d have to say the spirit of the subject. I feel like each of my girls I create take on a life of their own.

1xRun: Why should people buy this print?
Bec Winnel:  Because she will send you lots of good wishes for the rest of your life and look out for you and keep you safe.

1xRun: When did you first start making art? What was your first piece?
Bec Winnel: Have been making art all my life, I remember drawing realistic horse over and over when I was around 11 but have been taking my art seriously since 2007, when I began studying Graphic Design. The earliest piece I can remember is a horse I drew for my lovely little nana.

1xRun: What artists inspired you early on? Who inspires you now?
Bec Winnel: I can remember being strongly moved by the work of Brett Whiteley and the artists of the Renaissance period. I am still inspired by the same artists and period but also have found so many other artists that I love today including Lily Piri, Audrey Kawasaki, Kris Lewis, Tom Bagashaw, Amy Sol, Marco Mazzoni and the list goes on! 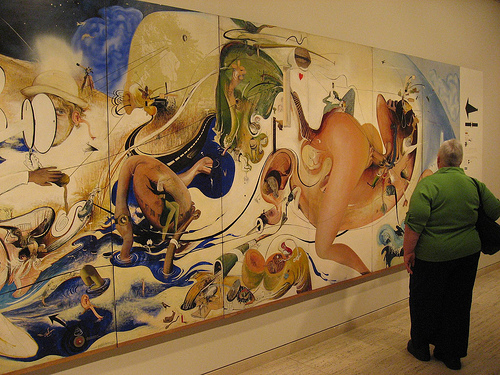 1xRun: Do you listen to music while you work? If so what?
Bec Winnel: I go through stages. If I have bought a new album I’m likely to listen to that for a few weeks. The most recent album I bought was Seeker Lover Keeper by Holly Throsby. When I’m feeling border with my music I’ll listen to some podcasts, usually physiology ones or watch TV series, just finished watching breaking bad. Sometimes I like just sitting in silence, listening to the birds about side or the rain on the roof.

1xRun: If you could collaborate with any living artist who would it be and why? Any deceased artists?
Bec Winnel: I would be to scared to collaborate with any artists for fear of ruining the piece! I would love to work with Leonardo Da Vinci if he were alive. His mind baffles me, he was so amazing.

1xRun: What was the first piece of art that you bought? Do you still have it? The last?
Bec Winnel: I think my first piece was a piece by Lily Piri. Unfortunately I don’t still have it because the gallery made a boo boo and sold it to two different people. I had to give it back. I was devastated. Luckily, I have since bought another Lily Pirri piece :) I think the last was actually another Lily Pirri piece too! It was a hand painted necklace of a deer.

1xRun: What have you been up to so far in 2013?
Bec Winnel:  I did a few group shows at the start of the year. Recently, I headed up to the Gold Coast, Brisbane and the Sunshine Coast to speak at the Analogue Digital Creative Conference. While I was up there, I also did three masterclasses at local universities.

1xRun: Any other big plans for the spring and summer?
Bec Winnel:  Let me think, that’s Autumn and Winter here? Just to keep developing a body of work for my solo show at Thinkspace Gallery in September.