1xRUN is extremely excited to welcome in legendary United Kingdom artist Ben Eine as he joins us with his 1xDebut Detroit 313 to coincide with Detroit day on March 13th, 3/13! Eine has been prolific in the current contemporary art scene, with his signature style radiating out from shutters of London around the world. Eine is one of a handful of artists that is able to say that his work has been used in international diplomacy, with former Prime Minister Tony Blair giving one of Eine’s paintings to former President Barack Obama as a gift. Read on to find out more about this very special edition and Ben Eine, and be sure to grab yours before they are gone . . . 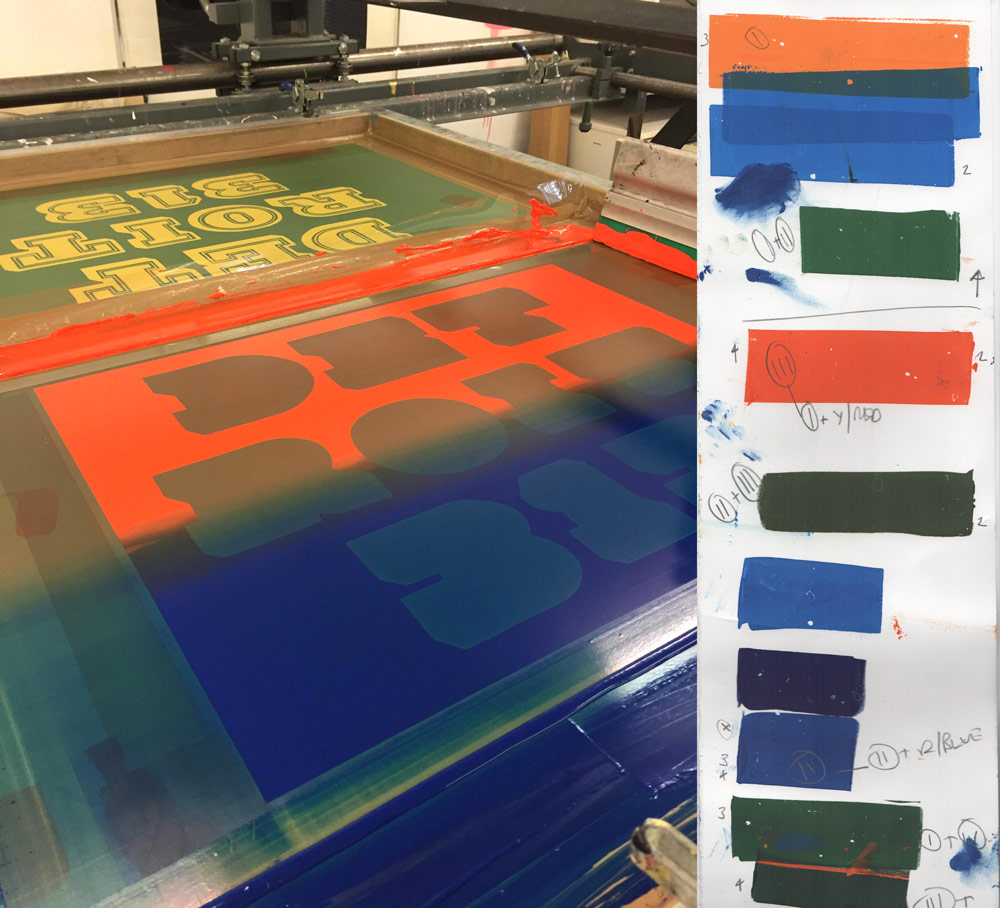 1xRUN: Tell us a little bit about this piece, anything immediate you would like us to highlight about this image?
Ben Eine: It’s very typical of my original paintings, perfect formula for cities all over the world. I love the US telephone codes for each area. It’s my favorite mix of numbers and letters.

1x: Was this image part of a recent theme, series or show that you have? What materials were used?
Eine:  It’s part of a new series of city/place editions that I’m working on. It was created using hand-cut stencils, spray on paper. Rescanned. And then screen printed.

1x: When was this series originally started? How did the idea and execution come about?
Eine:  It started when I did a group show in Manchester and we released 2 prints relating to the local football teams. It began with Manchester and Amsterdam, and we have some more planned for the future.

1x: How long did this image take to create from start to finish? What is unique about this piece compared with your other work?
Eine: 4 days. Every piece is completely unique, hand cut and hand painted. 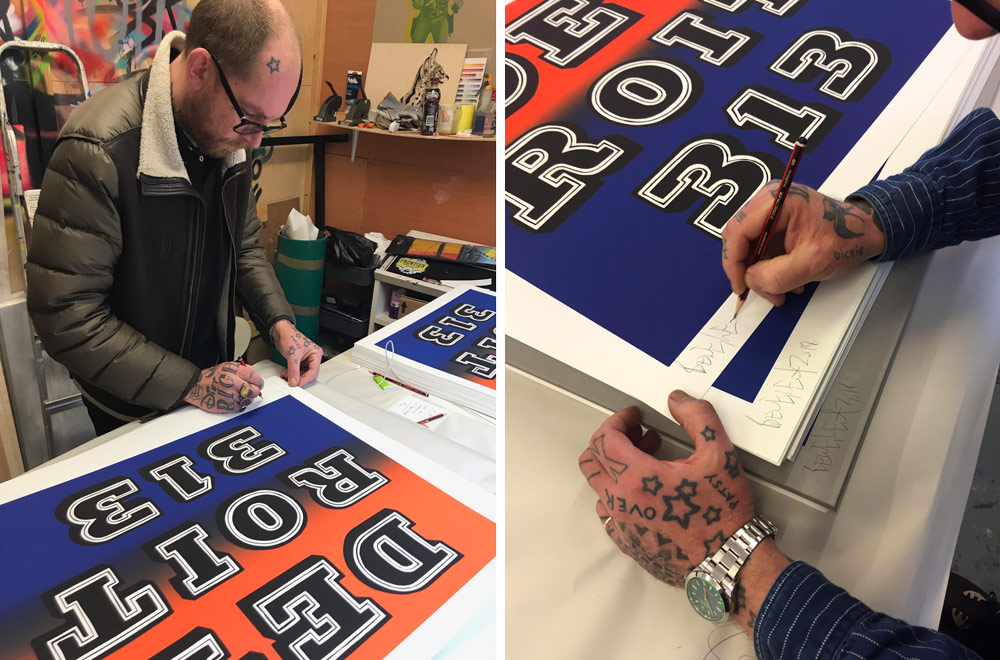 1x: Why should people buy this one of these prints?
Eine: Because they love Detroit! 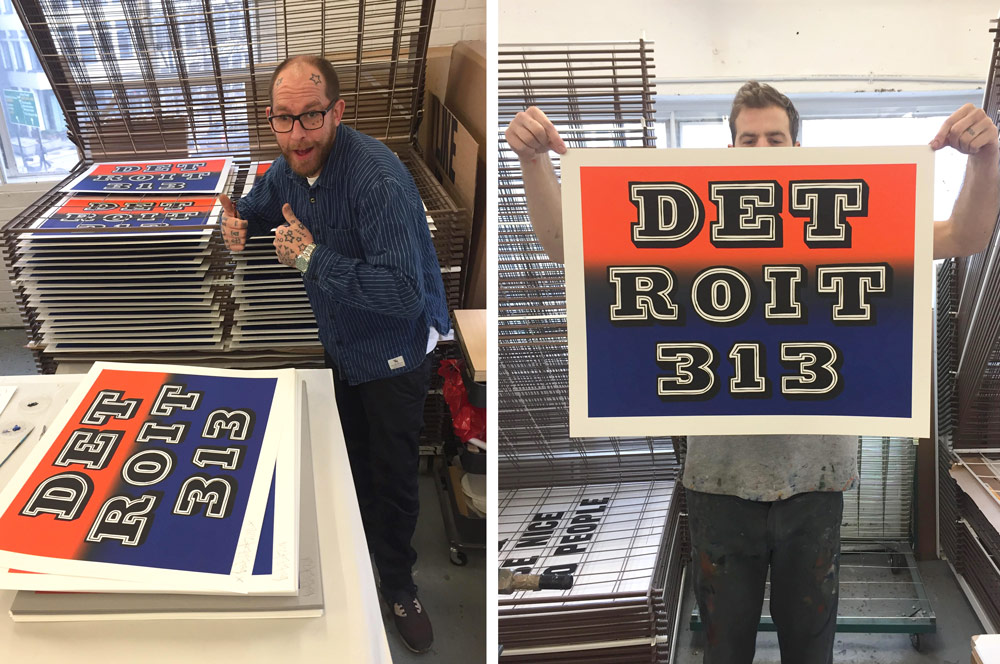 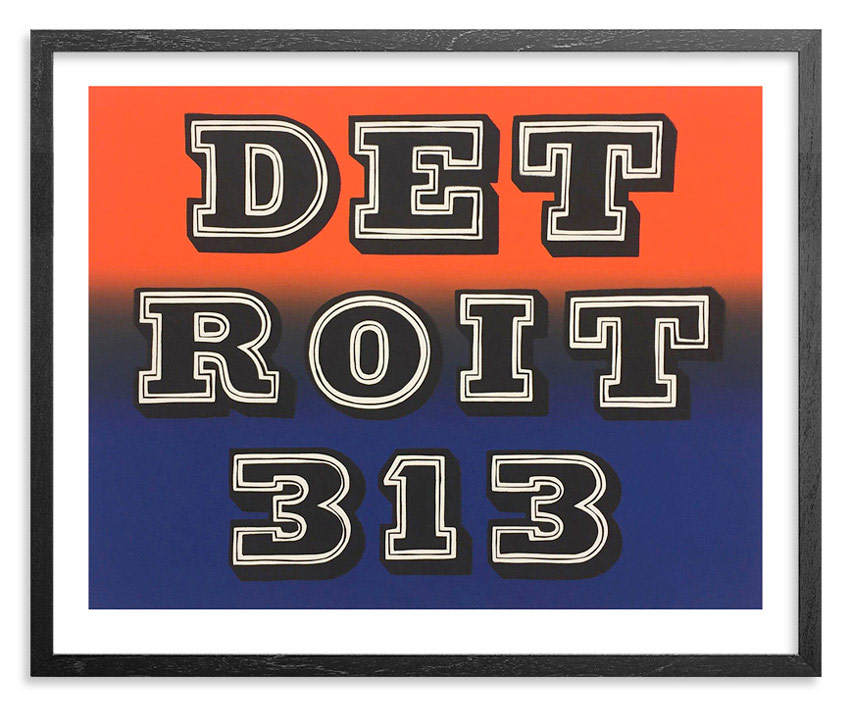 1x: When did you first start making art? What was your first piece?
Eine:  After seeing the famous graffiti book Subway Art by Martha Cooper and Henry Chalfont. Graffiti – Manic22 – a wall in Lewisham.

1x: What artists inspired you early on? What artists inspire you now?
Eine:  Early on Keith Haring and Andy Warhol were big inspirations in regards to how they changed people’s perception to what art is and how it can be exhibited. [For now] have a look on my Instagram.

1x: Do you listen to music while you work? If so what? If not then what is your environment like when you work?
Eine:  No, I’m too easily distracted. It’s like a library, all my assistants are very quiet.

1x: If you could collaborate with any living artist who would it be and why? Any deceased artists?
Eine:  How +  Nosm. Because since day 1 they’ve got it right. [For the latter] it would be Keith Haring, I could get him to fix the painting I have of his.

1x: What was the first piece of art that you bought? Do you still have it? The last?
Eine: The first was a Francis Tri-Trych. Yes, I still have it.   The last was a Gary Stranger Piece.

1x: Any big shows or events coming up that you’d like to share?
Eine: The next Roger Gastman show in Los Angeles, and then a Gumball art show and murals in Moscow.