Fresh off his sold out exhibition Matador at Thinkspace, Los Angeles based artist Brian Viveros joins for his debut release El Champion. Viveros will be joining Doze Green, Aiko, Brett Amory, Russ Pope and Brandon Boyd for the inaugural 1xRUN x Juxtapoz x Scope print suite at this year’s Scope Miami Beach 2015.  Brian Viveros will be on site signing limited edition prints on Thursday, December 3rd at 6pm. Please be sure to come by Booth G19 to score a print from Brian Viveros’ debut 1xRUN release. Read on as he gives some insight into his debut RUN… 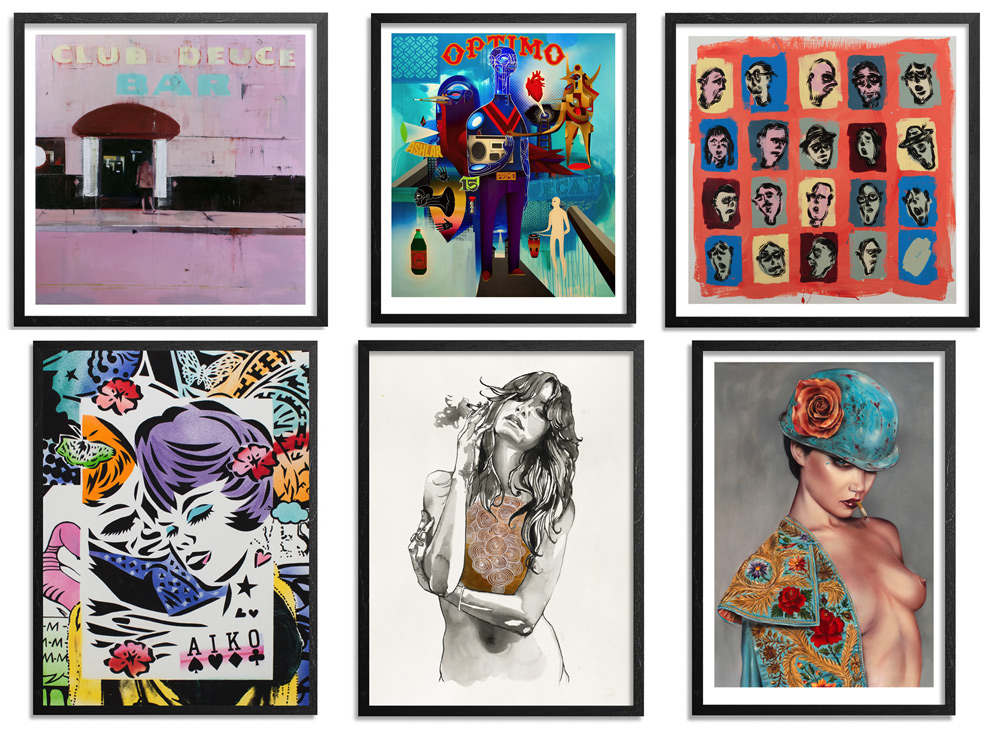 1xRUN: Tell us a little bit about this El Champion, anything you’d like to highlight immediately about this piece? It was part of your recent sold out exhibition Matador at Thinkspace correct?
Brian Viveros: Definitely. El Champion is the piece that really set the tone for the new body of paintings in my recent Matador exhibition at Thinkspace Gallery in LA. I’d never used blues or these types of pastel colors before. I wanted to take on a new direction with the palette, building intense contrasts, and elevating the attention to detail. The El Champion painting really embodies that change in direction. She speaks loud in her pose and wicked stare, and the details really breathe and bring her to life. I’d had this idea of pushing my signature matador vibe to a whole new level by incorporating Spanish patterns, authentic vintage capes, and ornate textile designs. Putting a new stamp and vibe on my smoking girl army, she is the victor her title suggests: EL CHAMPION. 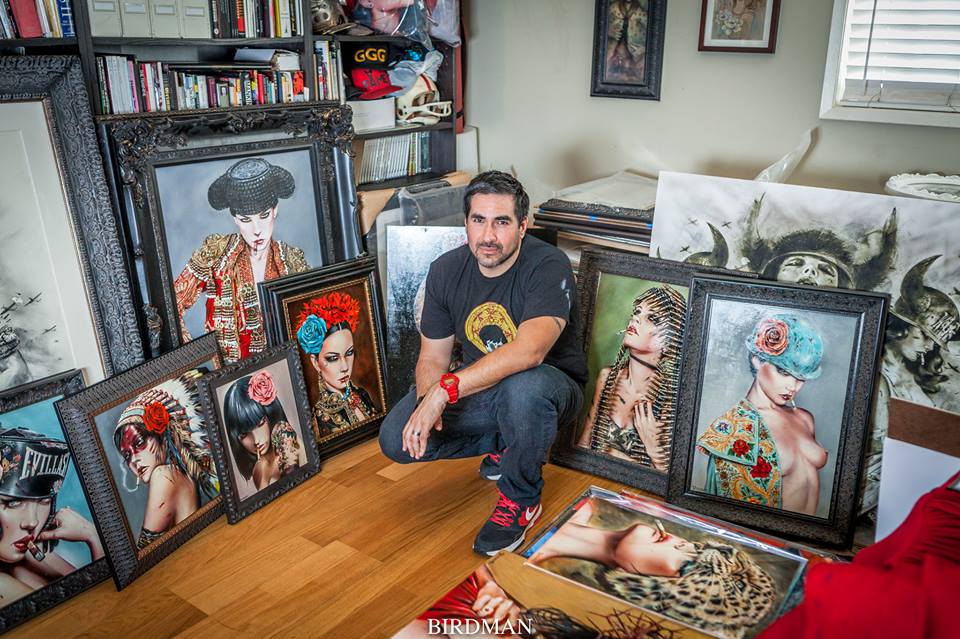 1x: How did this piece fit into the show?
Viveros:  Her traditional matador cape inspired the crossover from the military motifs I had used with the Dirtytroopers, to a more Spanish feeling vibe. She was the first embodiment of this new take on the Matador champion. Her defiant pose and traditional regalia imply her readiness for battle.  El Champion must always be prepared to step into the matador arena!

1x:  When was this piece created and what materials were used?
Viveros: This piece was created in 2015 using oils, acrylic, and airbrush on maple board 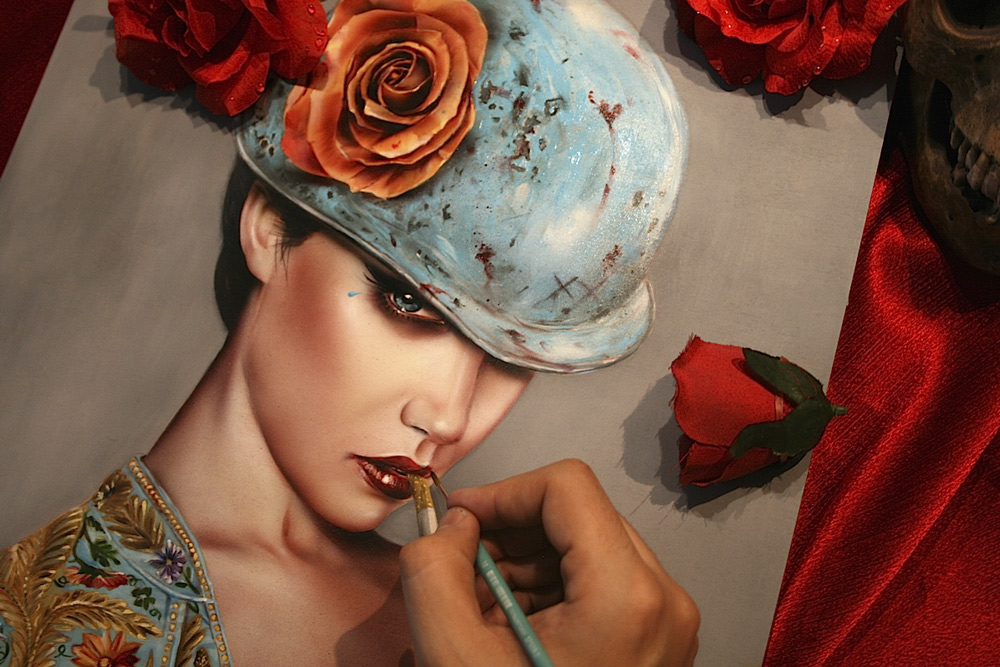 1x: Tell us how the idea and execution came about for this piece.
Viveros:  Well, at first she was going to be like a Lucha wrestling girl, a style and character I’m known for, but when I kept drawing her, because of the strength of her champion pose, she chose her own character, so to speak. I could only see and visualize one of my helmets tipped really low, just over the eyes to get that great Viveros girl stare I love to paint, looking really gangster. When it feels right, it’s just right and it comes together. The light blue colored helmet and the matador cape, with all of the detailed patterning, really brought the piece to life. I’m so happy with how she turned out.This was one of my absolute favorite paintings from the set. 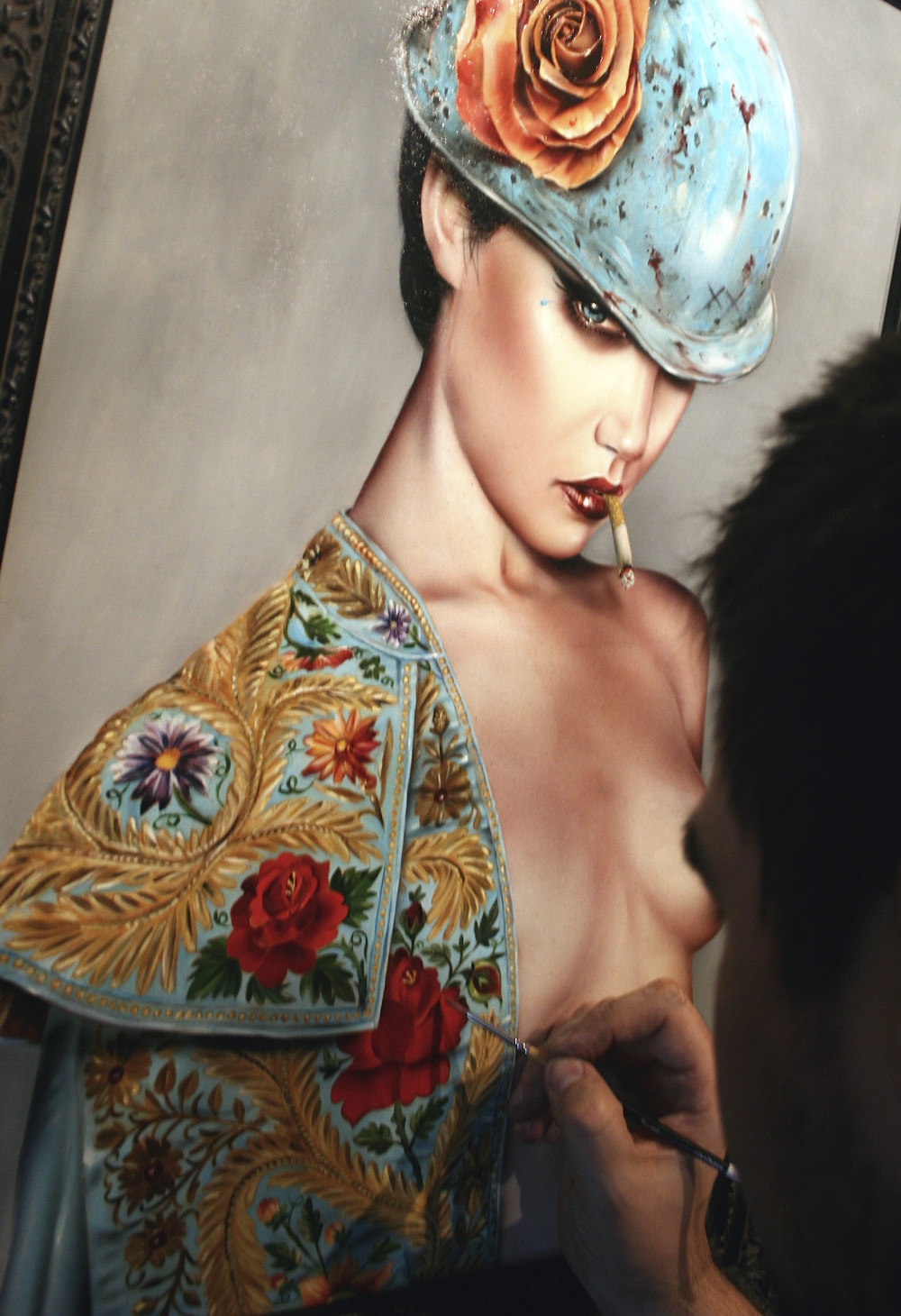 1x: How long did this piece take from conception to completion?
Brian Viveros: She took three weeks to complete.

1x: What is unique about this piece compared to your other work?
Viveros: The level of detail and the new direction of the color palette. 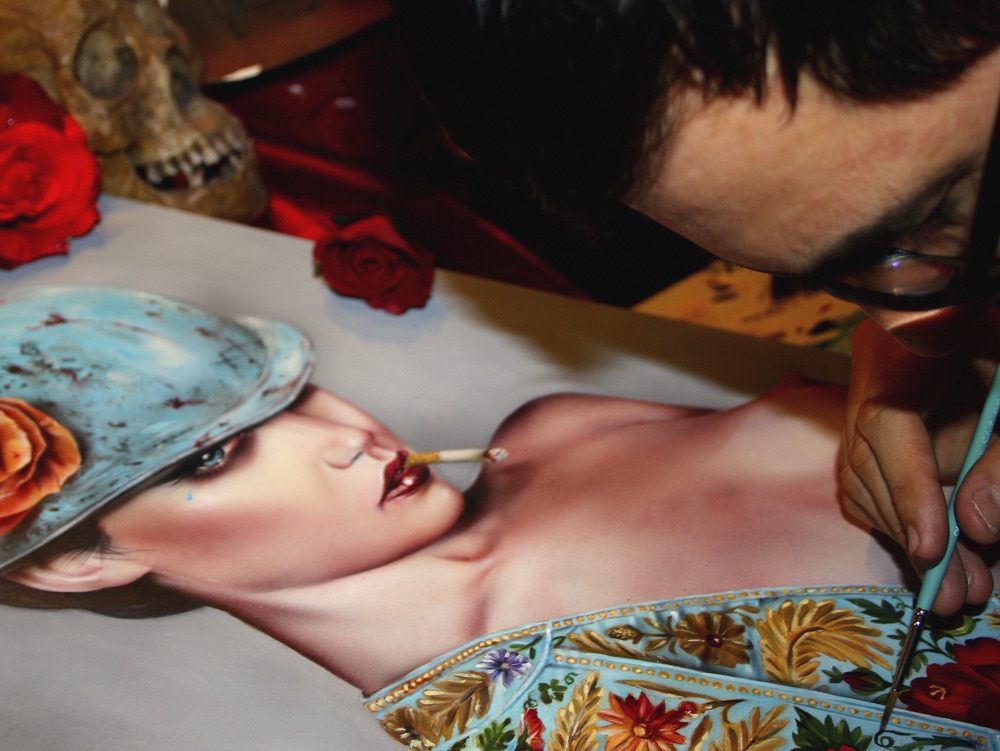 1x: Why should people buy this print?
Viveros:  Because it’s DOPE!  Well for one, this will be the only chance to get this very special print, as it’s in limited production and won’t be released again. Secondly, it’s a pivotal piece for me and represents the new direction my work has taken. It’s representative of the DirtyLand dominion, and the evolution of my work. I feel like the paintings have reached a whole new level of resolution, vision and detail, and this piece will always be hugely significant to me for that reason personally. It speaks to that progression of past to present. 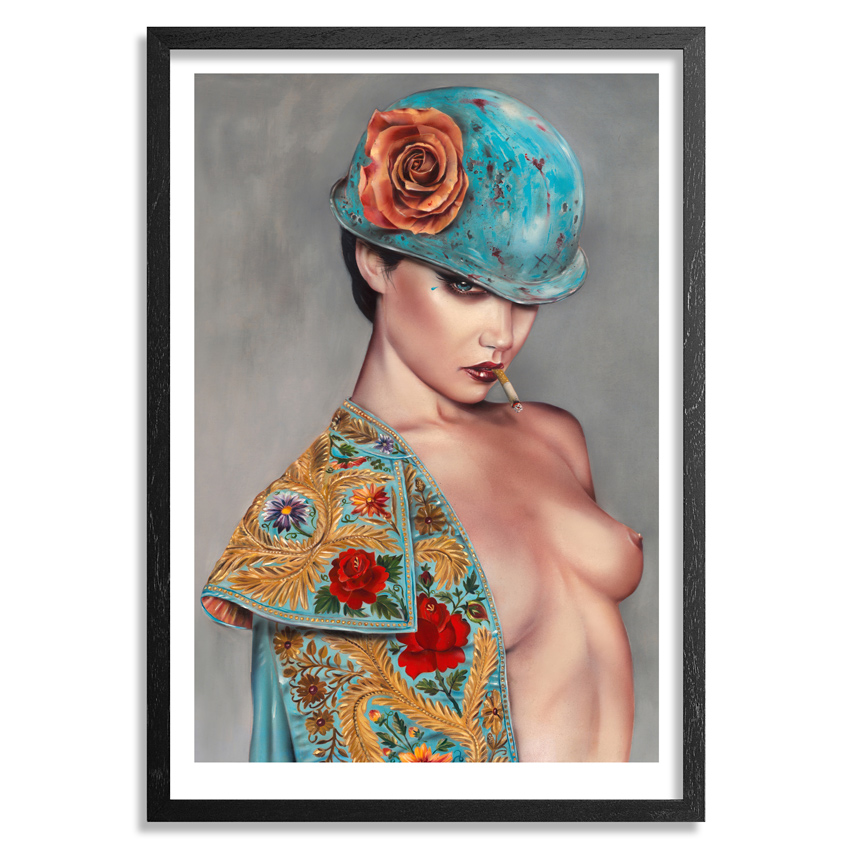 1x: Let’s talk about Matador, the show featured some of your largest works to date, why did you feel it was important to go so large with these latest works?
Viveros: I kind of visualize how I want things to look way in advance, it’s just how my mind operates. I plan everything out in great detail, and those that know me know that I’m a bit of a workaholic. So, prior to even settling on a name for my show, I wanted to have three large major pieces to set the tone. It started with a huge charcoal rendering, just because I felt it was time to step outside my dirty box with some looser and more gestural handling. It pushed the scale. I wanted to challenge myself for this show, as I knew I was taking over the entire gallery and the pressure was on. The space itself also dictated the necessity of having some big heavy hitters, as certain walls needed large-format works. 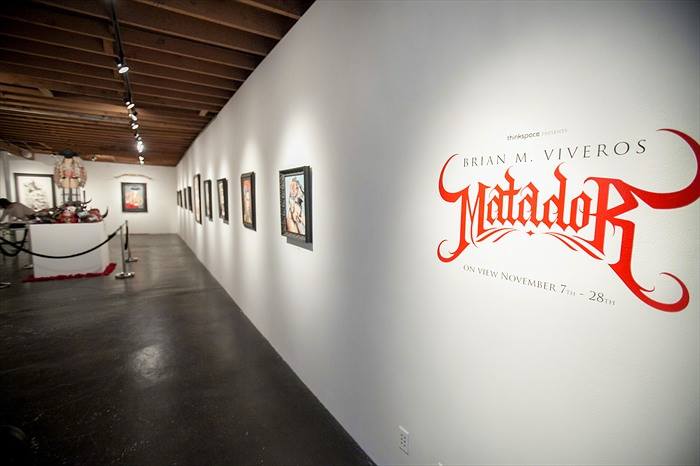 1x: Tell us a little bit about the significance of the title Matador, why was that chosen? Were there other titles you had in mind?
Viveros:  I’ve painted many bullfighters in the past, and it’s something I’m known for, but the title Matador was really just inspired by the connotations of this strong and powerful word. I knew I could build a show off of it. I’ve had the idea of doing an exhibition with this title for a couple of years now, but I feel things happen for a reason, and the timing hadn’t yet been right. Everything just kind of fell into place this year for the show. It was time. I wanted to use a lot of those traditional Matador elements in the paintings; the fabric, the clothing, the aesthetic. It’s a culture and tradition that has always fascinated me; the beauty of the costume and the conflicted poetics of the sport. No. I didn’t have any other title in mind. I had even visualized the font and look of the lettering for the show title, well in advance, to tie it all together in my mind. 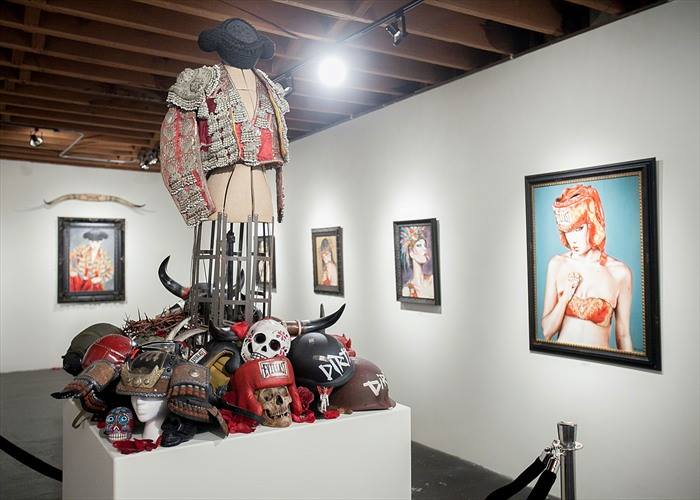 1x: You also released your first book The Dirtyland, which catalogs your work to date, how long have you been working on this book?
Viveros: It took over a year to put together The Dirtyland book. I must say that 2015 has been the craziest year of my life haha! I juggled so many things, the book, a huge sculpt ‘Bullheaded’ that was unveiled at the opening, and my largest body of work to date, including 50 pieces and installations. It’s been a crazy ride, but it’s all good and I’m just so happy we were able to get the book done in time. That was one of my biggest concerns. I wanted to ensure the book was made available first to fans at the opening. I’m just glad it all worked out, and I’m so happy with the end result. I was on board for the whole trip of this book, from beginning to end. We produced a solid publication that fans and art book collectors would want. Luckily, I have always been good at documenting my work, so we had a ton of visual material to work with!  The hard part was converting some of the older files to the right dpi, and organizing them so that everything looked good when going to print. The DirtyLand book is everything I wanted it to be, and is Thinkspace Editions very first release, so I’m pretty stoked and honored to be a part of that. 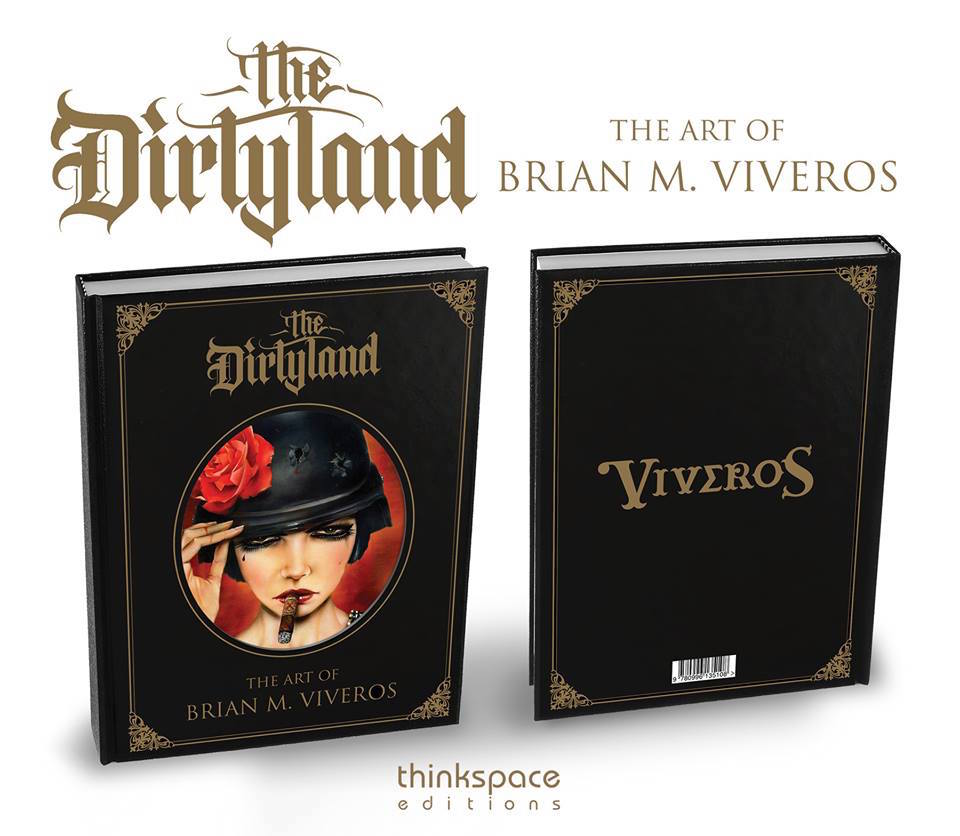 1x: Matador was a huge success with 50 pieces all sold on the opening night, what’s next for you over the next couple of months?
Viveros: Hmmm well, probably a lot of your readers don’t know this, but I do underground surreal films and have been making them since 2005. I’m actually in the process of starting a new film project, which I’m very excited about! I’ll also be at Scope Art Basel Miami this December with you guys and Juxtapoz, with the exclusive El Champion print, and then I’m doing a mini solo at Scope New York City! That’s right you’re getting it here first, it’s time to get back and give some well deserved dirty love to East Coast homies. So get ready DirtyTroops, I’ll be there in March!!

Photos from Thinkspace and Birdman