We welcome back Vancouver-based artist Camilla d’Errico as she joins us with Mademoiselle Gatto. Returning with her first release to canonize a disabled character, with the main figure being blind. This piece like much of d’Errico’s work seamlessly blends her characters with their surroundings, in this case a small little pack of cuddly pets. Read on to find out more about Camilla d’Errico’s latest release and be sure to grab yours before they are gone… 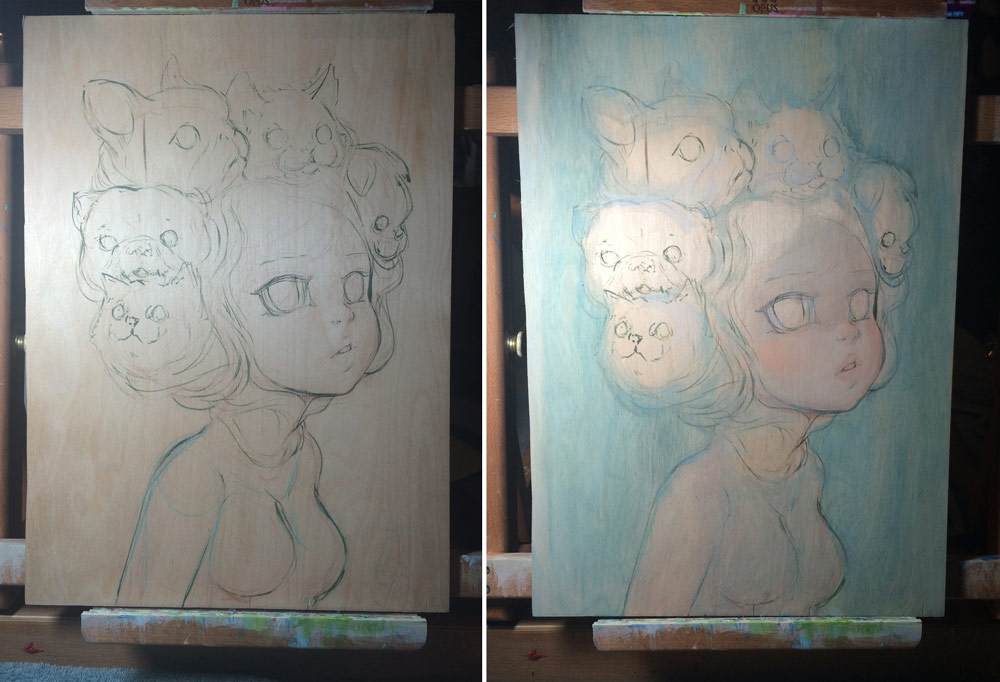 1x: Tell us a little bit about this painting, anything immediate you’d like to highlight?
Camilla d’Errico: Well I would like to point out that this is the first and only painting so far where I created one of my girls with a disability – as a vulnerable blind character. I was running on the treadmill thinking about my French Bulldog, Loki, and his cousin Eggo – a beautiful nugget of an English Bulldog. I love them so much! It got me thinking about all the pets I’ve had in my life and how much they’ve meant to me. An image of a girl’s hair turned into cats and dogs in my mind, as if she was as much a part of them as they were of her. So the piece is really about the unique relationship between animals and their companionship. As I was painting her face I purposefully made her blind to express how animals can love unconditionally.

1x: What materials were used on this piece?
Camilla d’Errico: Well I mainly use Holbein Duo Aqua Water Soluble Oil paints on birch plywood with synthetic brushes. I also use linseed oil and acrylic glazing medium for thinning the paint. 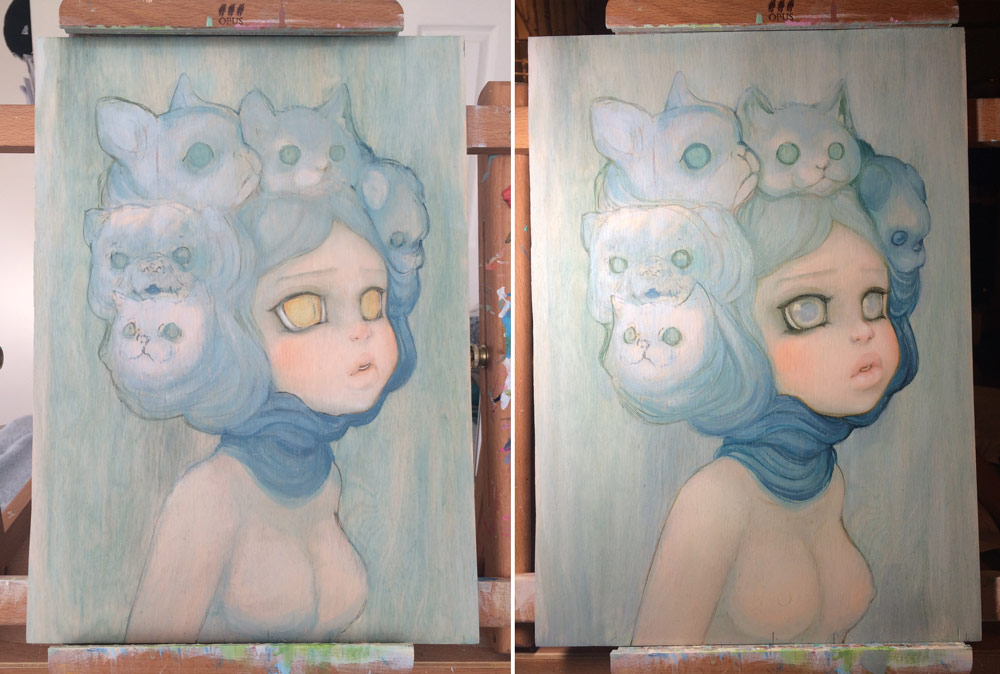 1x: When was the piece created?
Camilla d’Errico: It was created in the fall of 2014 as I recall, just before my show that was in the spring of 2015. I have lots of light in my apartment so I mainly paint during the late morning and afternoon to get the best light possible. Although in crunch time I have a day light lamp I use during the evenings.

1x: Tell us a little bit about your process and how the idea and execution came about?
Camilla d’Errico: The execution was difficult for me. I wanted to paint bright colors so bad, but at the same time discipline myself to sticking with only a few simple colors to illustrate how similar we can be to the animals we surround ourselves with.

1x: How long did this piece take from start to finish?
Camilla d’Errico: This one took longer than most due to the intricacy of the hair and detail around the eyes of all the animals. All told I spend maybe 3 weeks on this particular piece. 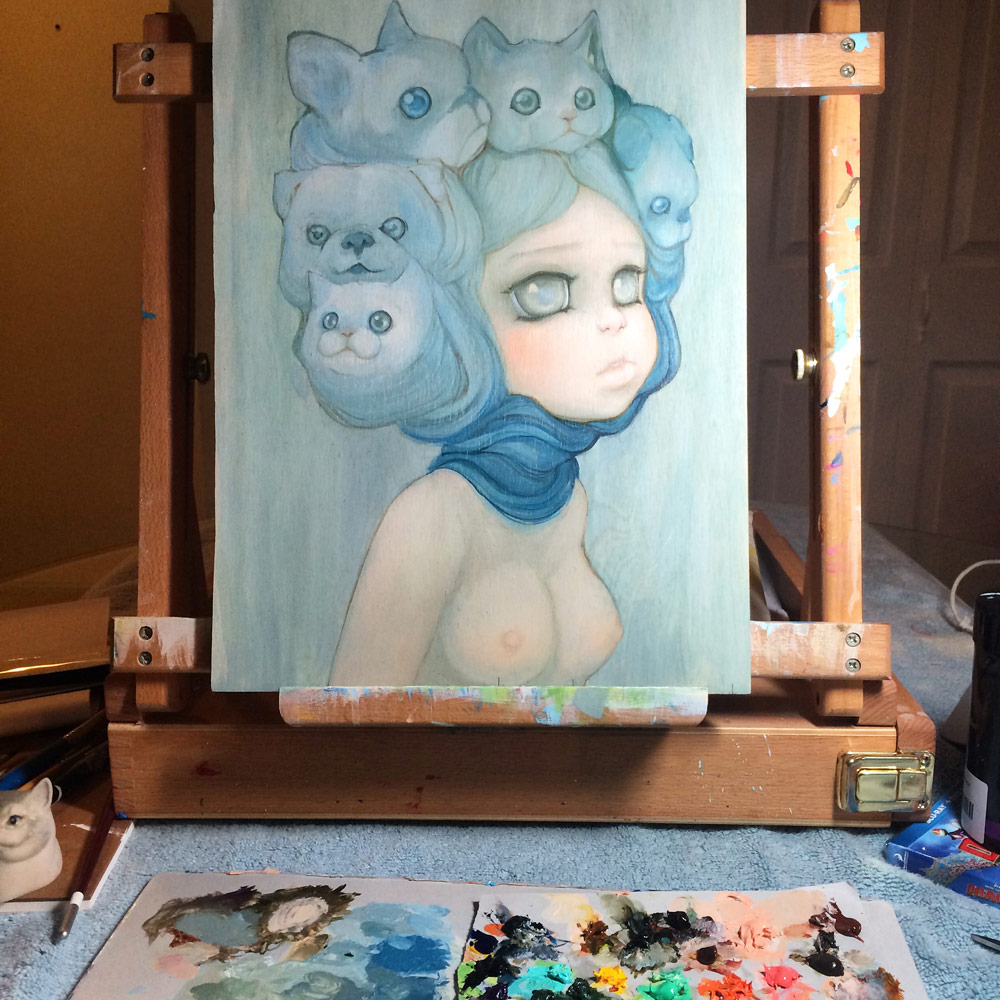 1x: What do you feel is unique about this piece compared with some of your other work?
Camilla d’Errico: It’s one of the only monochromatic pieces I’ve done. I had attempted a monochrome painting before, but added in too much color. It took a lot of willpower to hold back with all the amazing colors I have. It was incredibly challenging for me to not use anything bright and vibrant, but I think I managed to pull it off in a very lush way.

1x: Why do you think people will buy this print?
Camilla d’Errico: I have grown up with pets all around me since I was little, so I wanted to honor pets and animals we love and care for. This piece is a celebration of animal lovers, especially dog and cat owners. If people feel connected to the pets they have had during their lives then they might find this piece especially special. 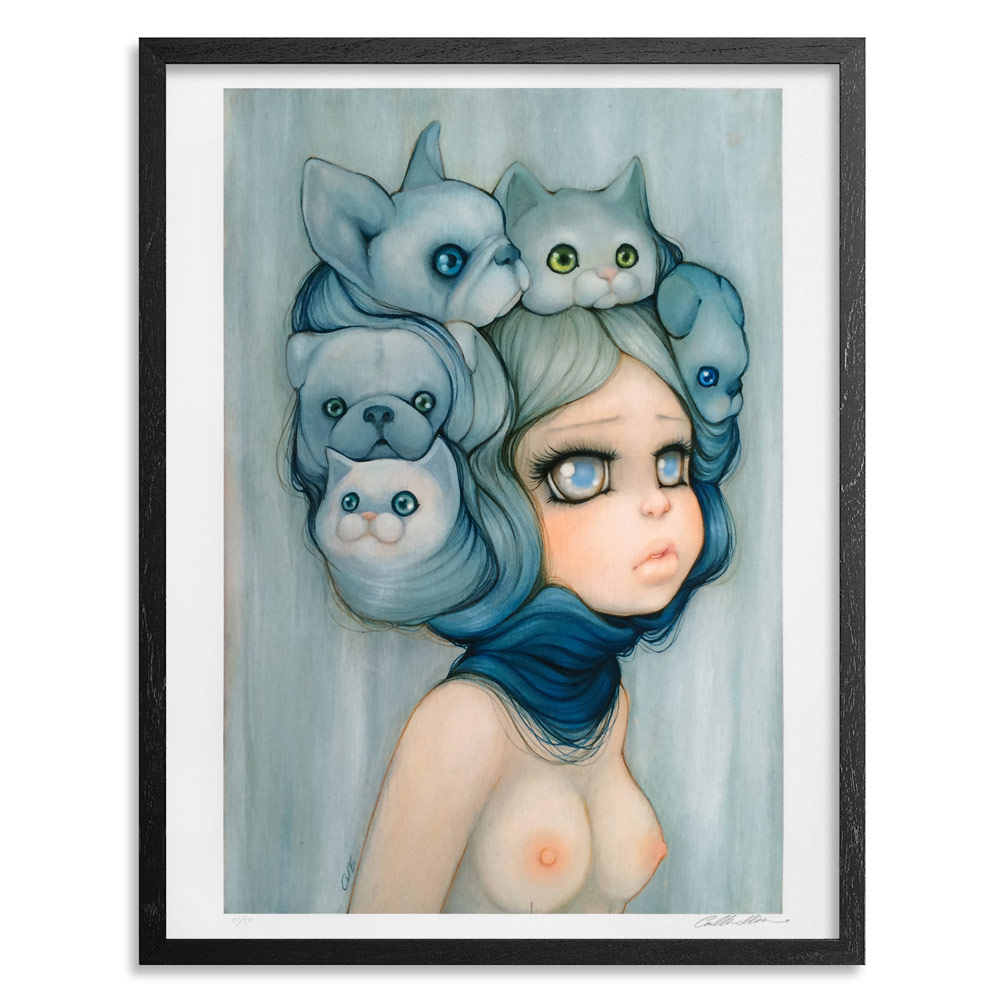 1x: You recently released a book as well, tell us a bit about that, what works are featured in the book?
Camilla d’Errico: The Rainbow Children art book is a collection of my gallery pieces between 2012 and 2015. It’s the first art book I’ve made with Dark Horse Comics that wasn’t just thematic, but a full representation of my work. So it includes many different styles from my gallery shows in that time. There are also sections of my 3d custom toy artwork and merchandise as well. 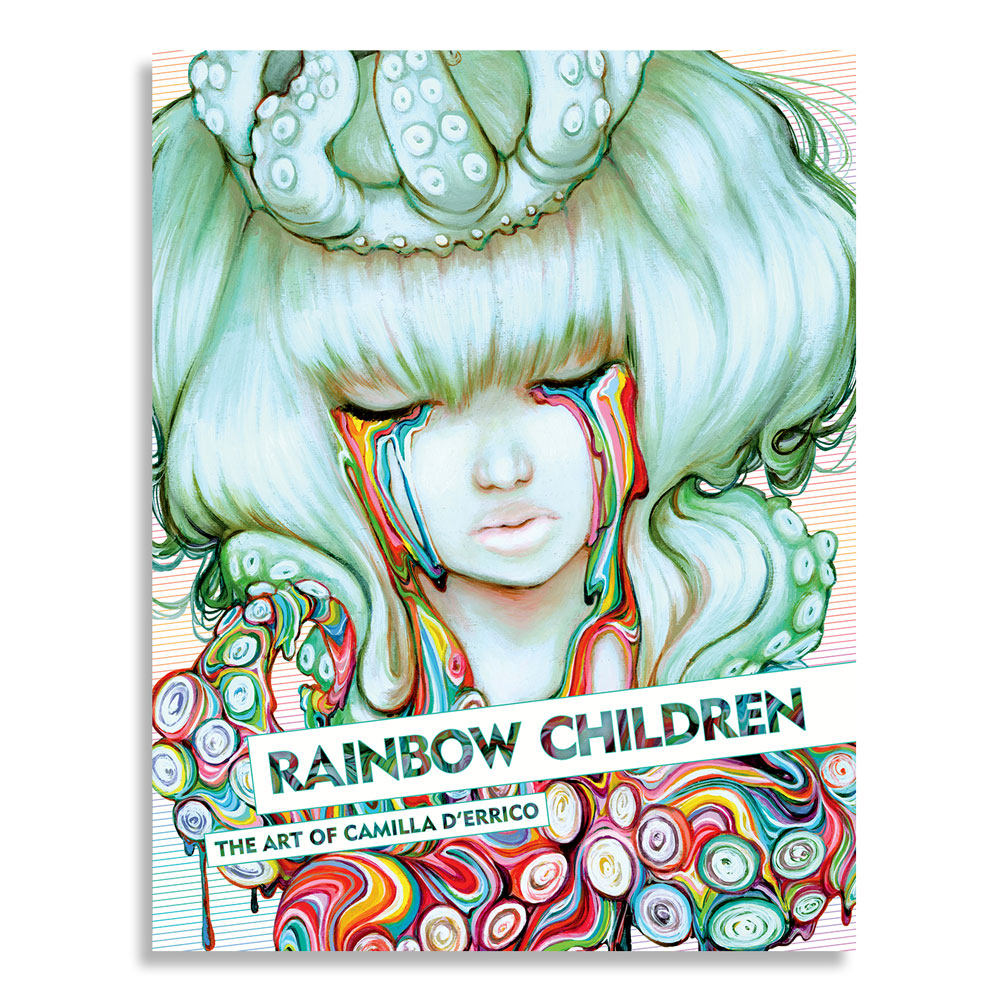 1x: How long did it take to put this book together?
Camilla d’Errico: Between start and finish just over a year. There’s a lot of back and forth tweaking with the editors who I think did an excellent job.

1x: What are some of the unique aspects about this book that fans will be excited to dive into?
Camilla d’Errico: There’s a chapter on how I created one of my most popular images of all time “The Dream Melt” which I have not really divulged officially until now. Another unique aspect of this particular release is that I write an intro to each series so it should give viewers a more in-depth look into my art process which I’ve never done in an art book before. 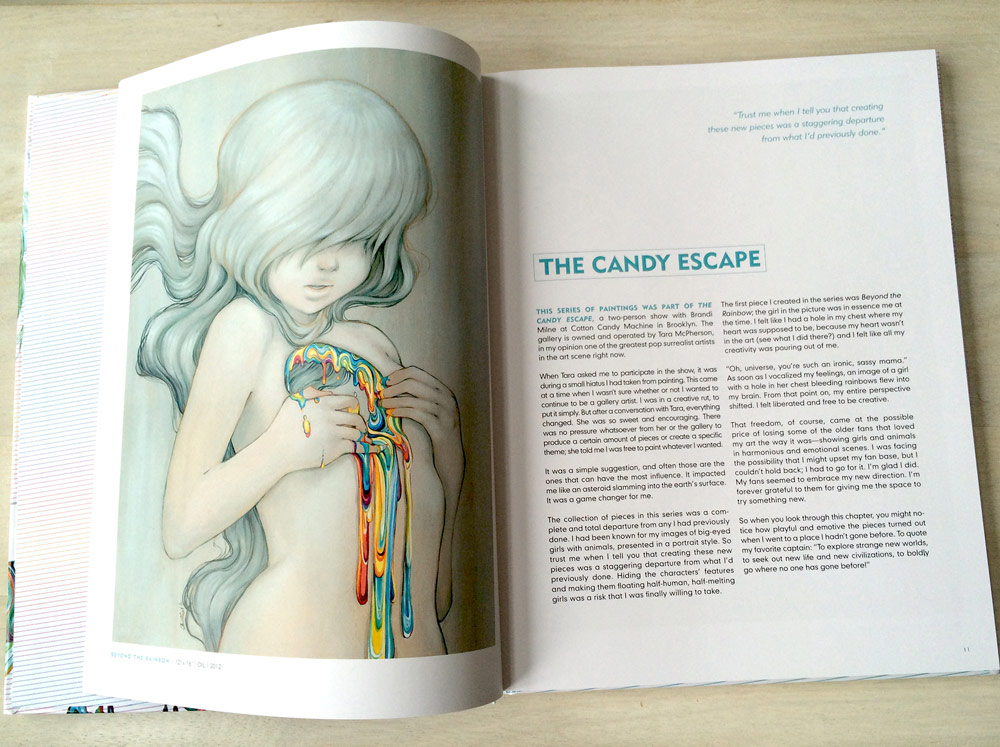 1x: It’s been a few since we caught up, bring us up to speed on what went down in 2015 for you?
Camilla d’Errico: 2015 was one of my busiest years ever! I was working on the Rainbow Children art book and Pop Painting as well, which just recently released. I was also working on my sunglasses and reading glasses collection releasing this March with Coastal.com. I was also hard at work on a coloring book that’s coming out this year that I’m really excited for. Let’s see what else… I went to Singapore, which is somewhere I have not had the chance to visit for several years. I successfully completed a Walking Dead Zombie Run at Comic Con, and by successfully completed I mean I didn’t get eaten and turn into a Zombie. I also had my 10 year painting anniversary and my 2 year wedding anniversary. Another little highlight was meeting Nathan Fillion behind the scenes at work on ‘Castle.’ 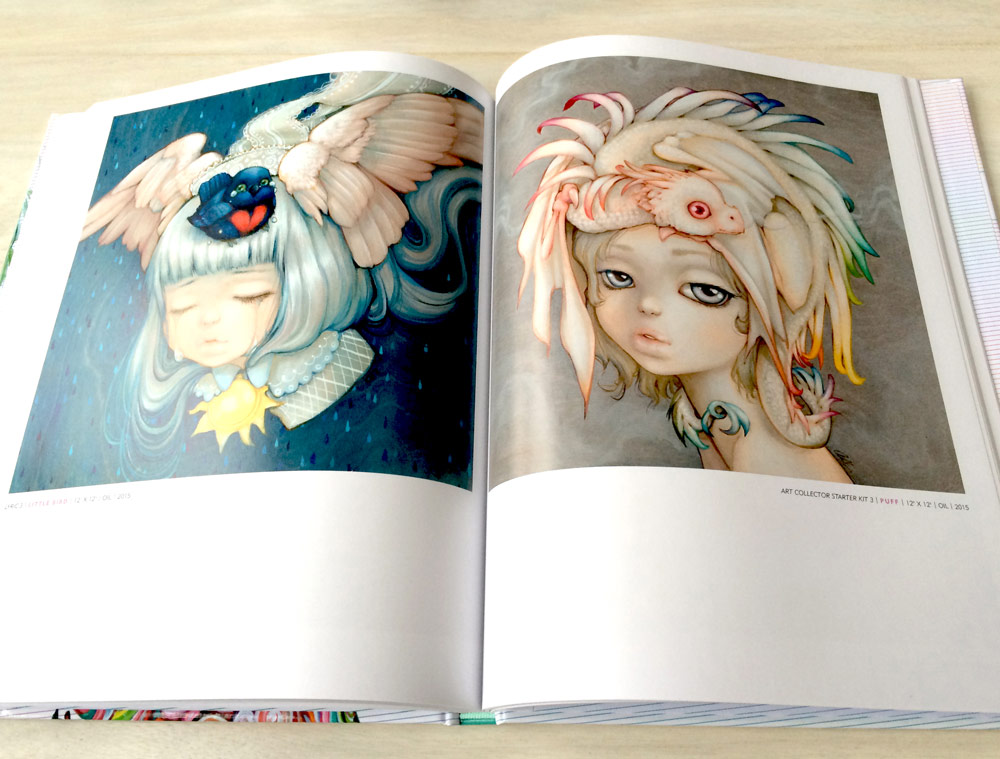 1x: What strides do you feel you’ve been making in your work recently?
Camilla D’Errico: I think I’ve been making a lot of bolder choices. I think I have let go of specific ideas of what I think I should be painting and begun to cast a wider net in my imagination instead of pigeonholing myself into a strict and particular style.

1x: What obstacles do you feel you’ve been dealing with as far as creating new work?
Camilla D’Errico: I’m constantly battling the issue of nudity which is a very touchy subject in North America. I paint women naked sometimes which makes certain people uncomfortable. The body IS art. I don’t paint them to be sexual. I think that it’s always a subject that I find to be an uphill battle. But I’m European so it’s important to me to reflect that aspect of myself in my artwork. 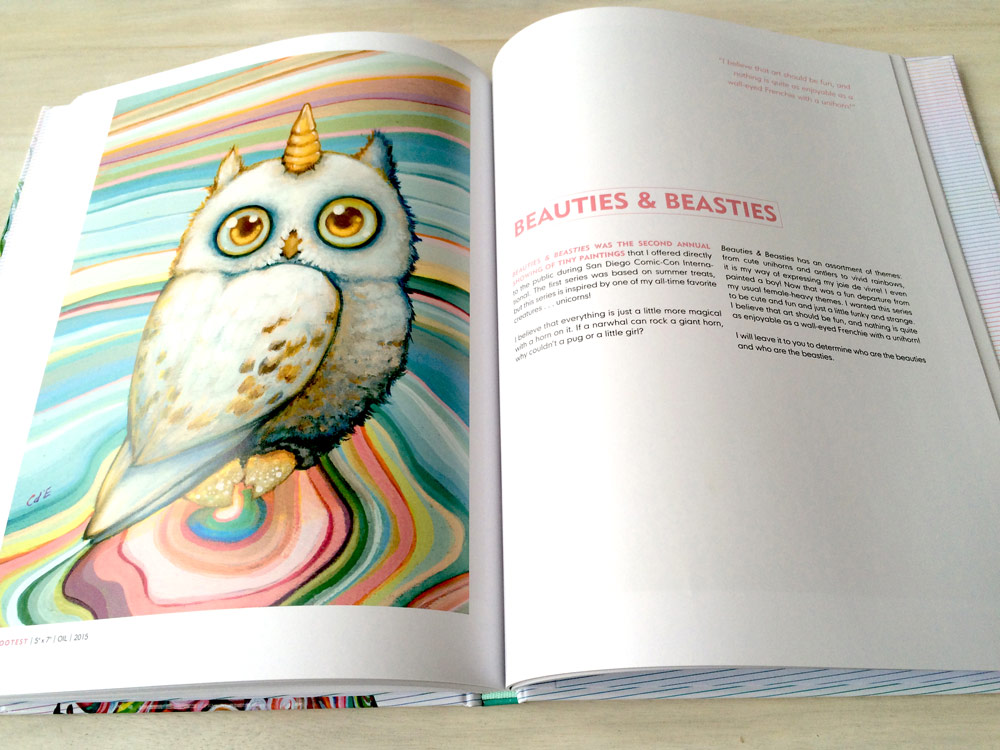 1x: Are there any artists that have been inspiring you as of late?
Camilla D’Errico: Well I recently discovered Charlie Immer who has a super unique and beautiful style and I’m completely in love with Hikari Shimoda’s work as well. I’ve fallen head over heels for Mab Graves’s work too. I love their art so much, it brings a lot of joy and inspiration into my life and it’s always a pleasure to see what other artists are up to.

1x: What is your schedule like these next few months?
Camilla D’Errico: Well it’s literally insane. I feel like I haven’t had a break since Christmas. I’m going full speed ahead. I work 90% of the time and if my math serves me I have 10% fun time left over, which I really appreciate and utilize to the fullest. 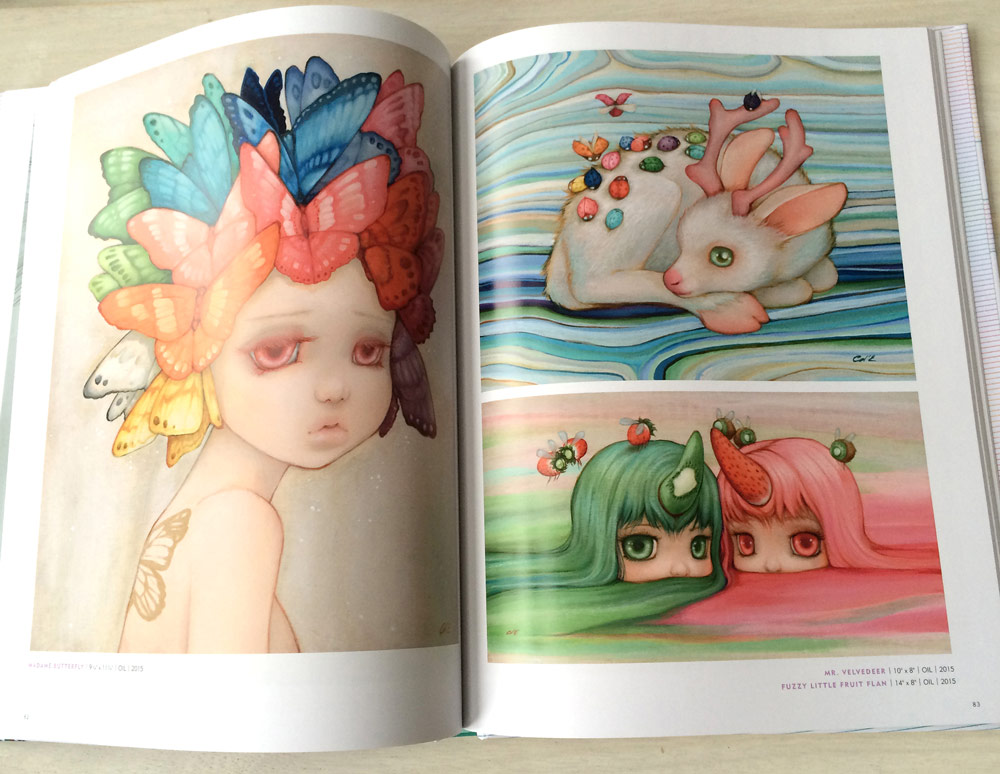 1x: What are some of your goals for 2016?
Camilla D’Errico: My goals for this year are to get involved with charity work again and to support causes that I truly believe in. This was something I was doing in 2013/14 and missed out on it last year due to a hectic schedule. But this year, I’m getting back into it. I’m also going to start doing art workshops in Vancouver now that I have my own how to paint book. I’m focusing on my next book releases coming up and my solo show with Corey Helford in LA as well as my solo show in Australia with Auguste Clown Gallery in November. So 2 solo shows in one year is a big deal for me and is really pushing me creatively as well as time wise.

1x: What was the last piece of art that you bought?
Camilla D’Errico: It was a Crystal Morey piece. I commissioned a sculpture from her. It hasn’t arrived yet, but from the pictures it looks amazing. If I’m really lucky I’ll get to own an original Charlie Immer too!

1x: Anything else that we have left out that you want to touch on?
Camilla D’Errico: I’ll be flying down to LA for my solo show at Corey Helford gallery April 23rd. So I’m looking forward to being at the show in person and meeting with fans and friends in LA.