1xRUN is excited to announce Drop In The Park featuring 7 new timed limited editions from legendary Seattle photographer Charles Peterson! To coincide with Pearl Jam‘s 2018 US tour 1xRUN has partnered up with Charles Peterson to look through his expansive archives for some old favorites, never before seen shots and more surprises for 7 new timed limited editions dropping for each stop of the band’s 2018 tour! Pre-order the Complete 7-Print Set NOW or find your individual favorite as we drop new editions each show. In partnership with Pearl Jam’s ongoing initiative to fight homelessness a portion of the proceeds from Charles Peterson’s Drop In The Park editions will be donated to Mary’s Place in Seattle. Read on for our full interview with Charles Peterson as he talks about these iconic early photos and more. . .

Update All 7 Prints Have Been Revealed & Are Available For Only 1 More WEEK! 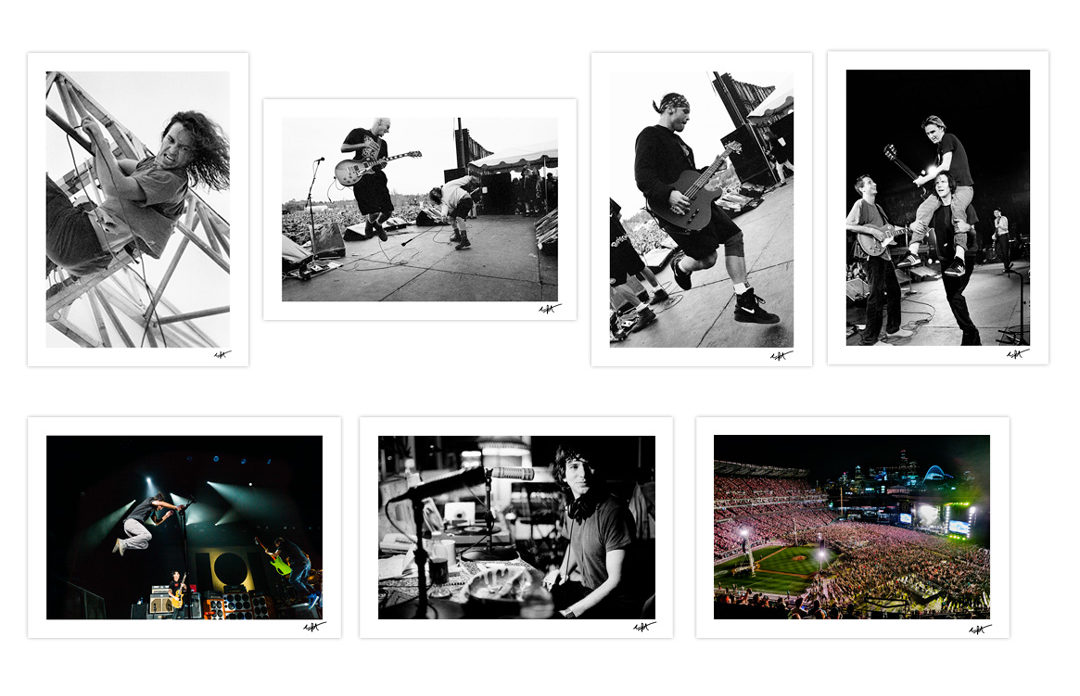 Click To Purchase Each Individually Or In A 7-Print SET!

1xRUN: Tell us a little bit about these photos, anything immediate you would like us to highlight about this imagery?
Charles Peterson:  These Pearl Jam photos represent over 25 years of working with the band. They make me feel old and young simultaneously.

1x: Are these photos imagery part of a recurring theme, series or show that you have?
Peterson: I guess you could say these are part of what I’m now calling “The Grunge Years” which is also the working title of my next book I’m slowly assembling. A lot of this work (in fact most) was self-assigned, and the bands trusted me to do my thing and do well by them. It’s still the agreement we have for post-grunge events like the Pearl Jam Mariners stadium shows I’m shooting this week. 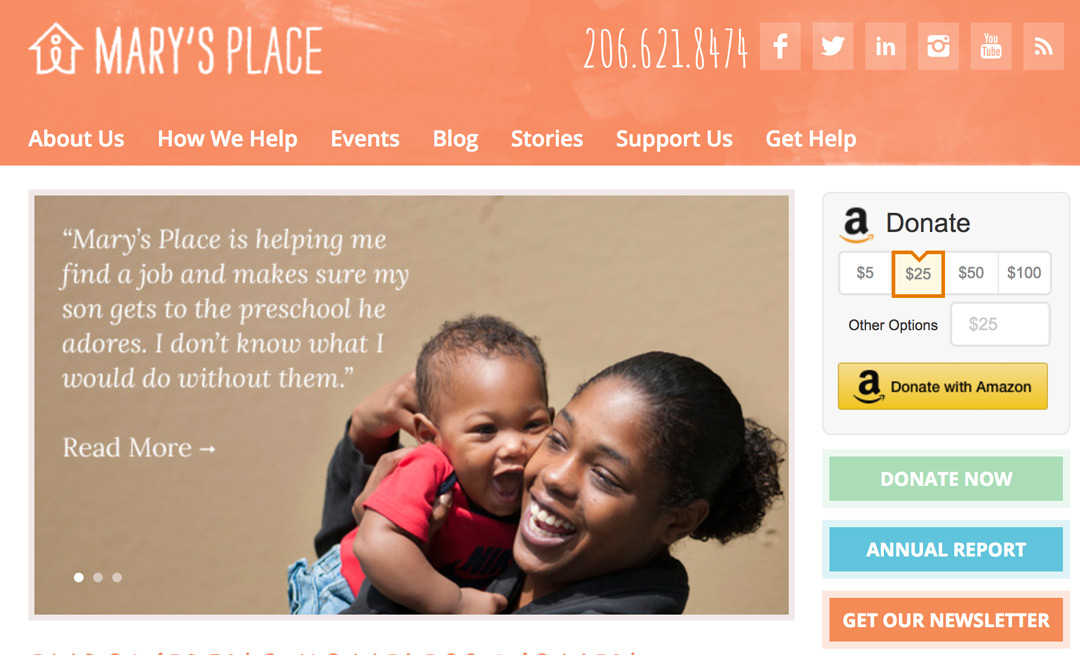 A portion of proceeds from Charles Peterson’s Drop In The Park editions will be donated to Mary’s Place in Seattle. You can also donate directly on their website.

1x: For those who might not know, could you tell us a little bit about this Drop In The Park show back in Seattle’s Magnuson Park in 1992?
Peterson: This was a free show who that Pearl Jam paid for and organized themselves, and took place at Magnuson Park on the eastern shoreline of Lake Washington in a giant grass field. 70,000 plus people attended. The highlight of the show was Eddie climbing the lighting scaffolding and swinging himself via a 100 foot mic cable out over the audience. It was truly a dangerous thing to do, but of course we’re all glad now that he did.
1x: Let’s talk about this first photo with singer Eddie Vedder hanging from the stage scaffolding, what immediately comes to mind for you when you see this photo?
Peterson:  Gutsy. Stupid. Only Eddie. Not the last time I would see or photograph him doing something so brazen. I have no idea what the tensile strength of that microphone cable was, and I’m sure nobody in the band or crew did either. In fact I’m not sure who knew that he was actually going to do that, or if it was totally spontaneous. But he pulled it off and swung neatly out over the audience several times before he dropped and was carried overhead by fans back to the stage. Rock history for sure folks!

1x: Vedder would eventually go on to do that fairly often throughout Pearl Jam’s live shows, when was the first time you saw him do this?
Peterson: Believe it or not, this was the first time I photographed them live, though I was shooting a movie camera for director Josh Tate on the  Evenflow video when Eddie jumped from the theater balcony into the audience.

1x: What was the atmosphere like as Eddie was hanging from the stage during this Drop In The Park show?
Peterson: Tense as well as anticipatory. It really was death defying.

1x: Eddie actually wrote the introduction to your last book, Touch Me I’m Sick, how as your relationship with Eddie and the band evolved over the years?
Peterson: For a period there we were fairly tight, but in recent years have gone our separate ways, though he made a point of saying hello to me from the stage Wednesday night with a little wave. It was sweet. We bonded over our love of Scrabble on the No Code tour. Very rock and roll. For the record, I’ve never been a Pearl Jam “insider” per se. But we have a great mutual respect for each other and of course roots that go way back.

1x:What camera and processing materials were you using when you took these photos?
Peterson: I used Nikon film cameras for the vintage images, and Leica or Nikon digital for the more recent. With a band like Pearl Jam, I typically work with lenses anywhere from superwide (14 -18mm) to long (200 or 300mm). The film for ambient lit photography back in the day was TMAX 3200. Unfortunately, that’s all I had available for the Drop show, so I had to rate it at 800 and pull process, which is why those images are a bit extra grainy. Now we only have to concern ourselves with having an extra memory card on hand.

1x: What is unique about these photos compared with your other work?
Peterson: One thing about photographing Pearl Jam is there’s never any flash. They were one of the first bands that made it to the big stages out of the Seattle scene – stupidly I missed out on their club days because I was so focused on Nirvana, Mudhoney and Soundgarden (not a bad thing.) Big stages mean longer lenses, faster film, etc. so it was an opportunity to explore a different style of music photography than I was initially known for. 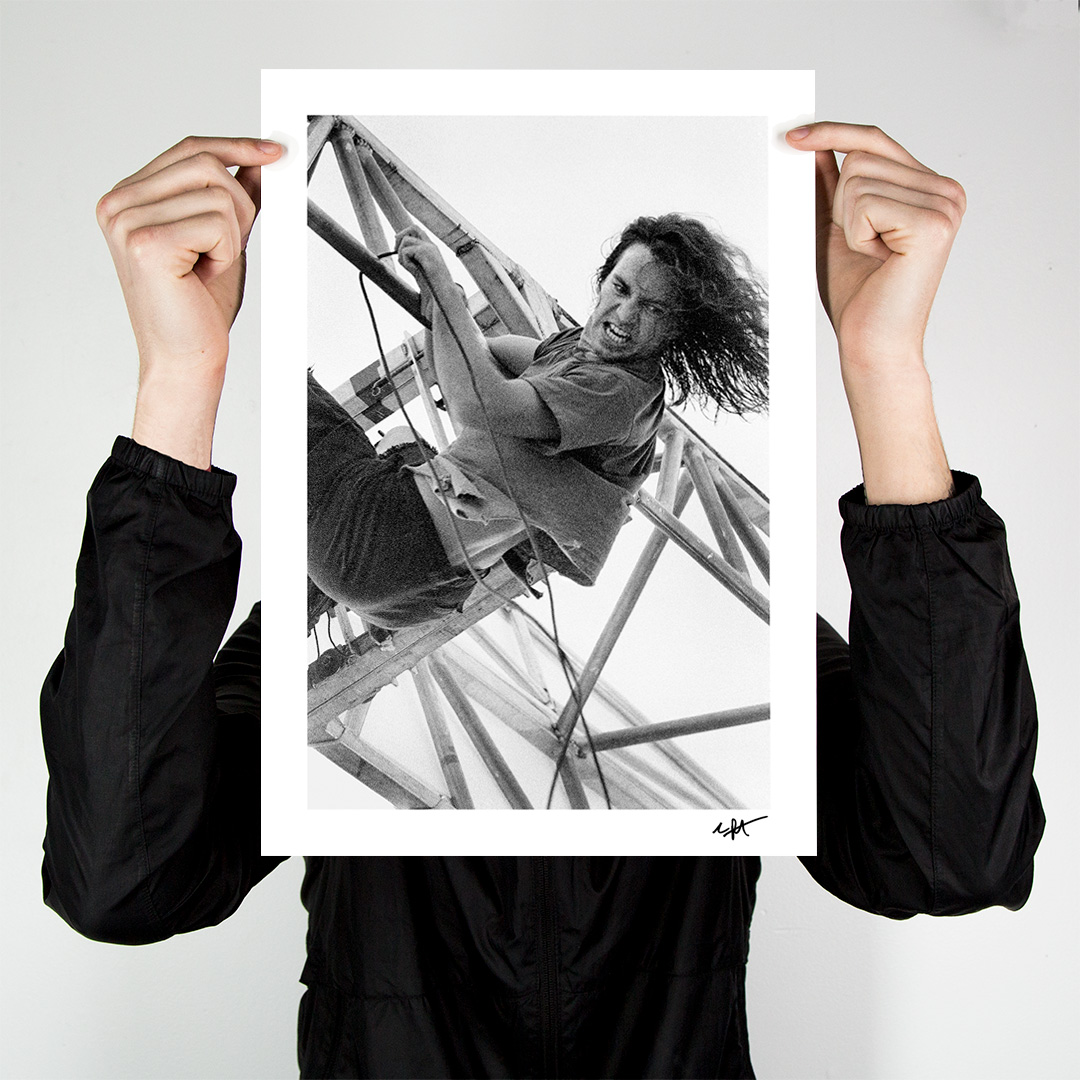 Buy This Edition Individually + Order The Complete 7 Print Set As We Reveal A New Pearl Jam Edition From Charles Peterson Each Date Of Pearl Jam’s US Tour! 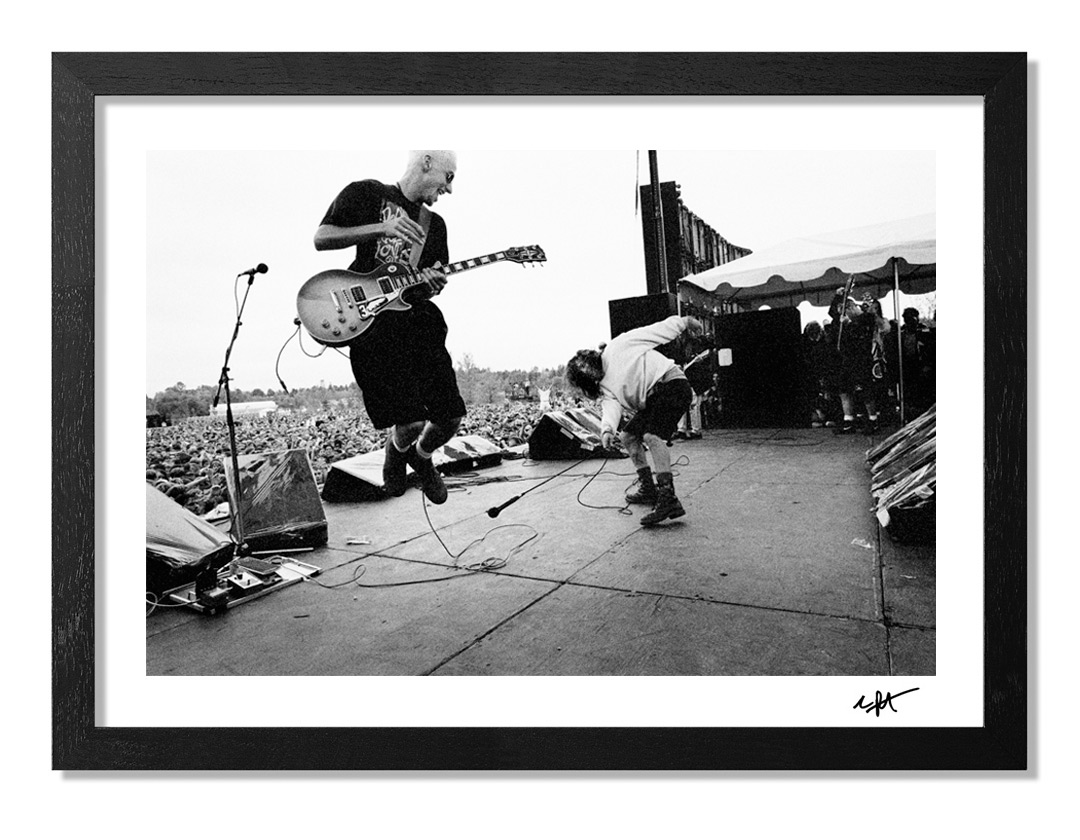 1x: Next up for the second print in this series we’ve got another shot from the same show, captured as guitarist Stone Gossard is jumping up from Eddie’s microphone swinging at his feet, anything immediate you’d like to highlight about this image?
Peterson:  I think this image really speaks to how much fun Pearl Jam have together as a band on stage. I guess it also speaks to my reflexes to be able to capture this moment just as the mic is swinging under Stone’s feet. I love it, because to me some of the best rock shots are those where the band is either interacting among themselves and/or the audience. And the best part of the shot: the guy way out in the audience, perfectly situated right in between Ed and Stone, standing with his arms outstretched, reacting to the moment. It’s always the small details that make photographs perfect.

1x: How many rolls of film did you end up shooting at this show?
Petersons: Six rolls live and one backstage. All developed and printed in whatever bathroom or kitchen I was using for a darkroom at the time.

1x: What are some of the more challenging aspects of shooting a band as unpredictable as Pearl Jam? How have things changed over the year’s with them, shooting some of their early shows and touring with the band in Europe and most recently shooting these recent “Home Shows” in Seattle?
Peterson:  Big shows have their own unique challenges. Access is one – I’m one of the few photographers they allow to shoot their whole shows. Being able to do two or more shows is always best too. There’s lots of changing light, mellow moments and then it all explodes into furious activity so it’s good to have an idea of how to pace yourself. Another challenge is making it memorable. A close up of Eddie singing or Mike during a guitar solo could be any show from the last several years, so often I go wide when others go long, trying to include as much of this crowd and stadium as possible. And work around monitors, security, video cameras etc. It can really take thinking outside of the box, knowing your f-stops and shutter speeds, and quick reflexes. And now I shoot the shows mostly with a digital Leica M10 manual focus rangefinder. Not the usual gear one thinks of for a stadium rock show but it works for me. 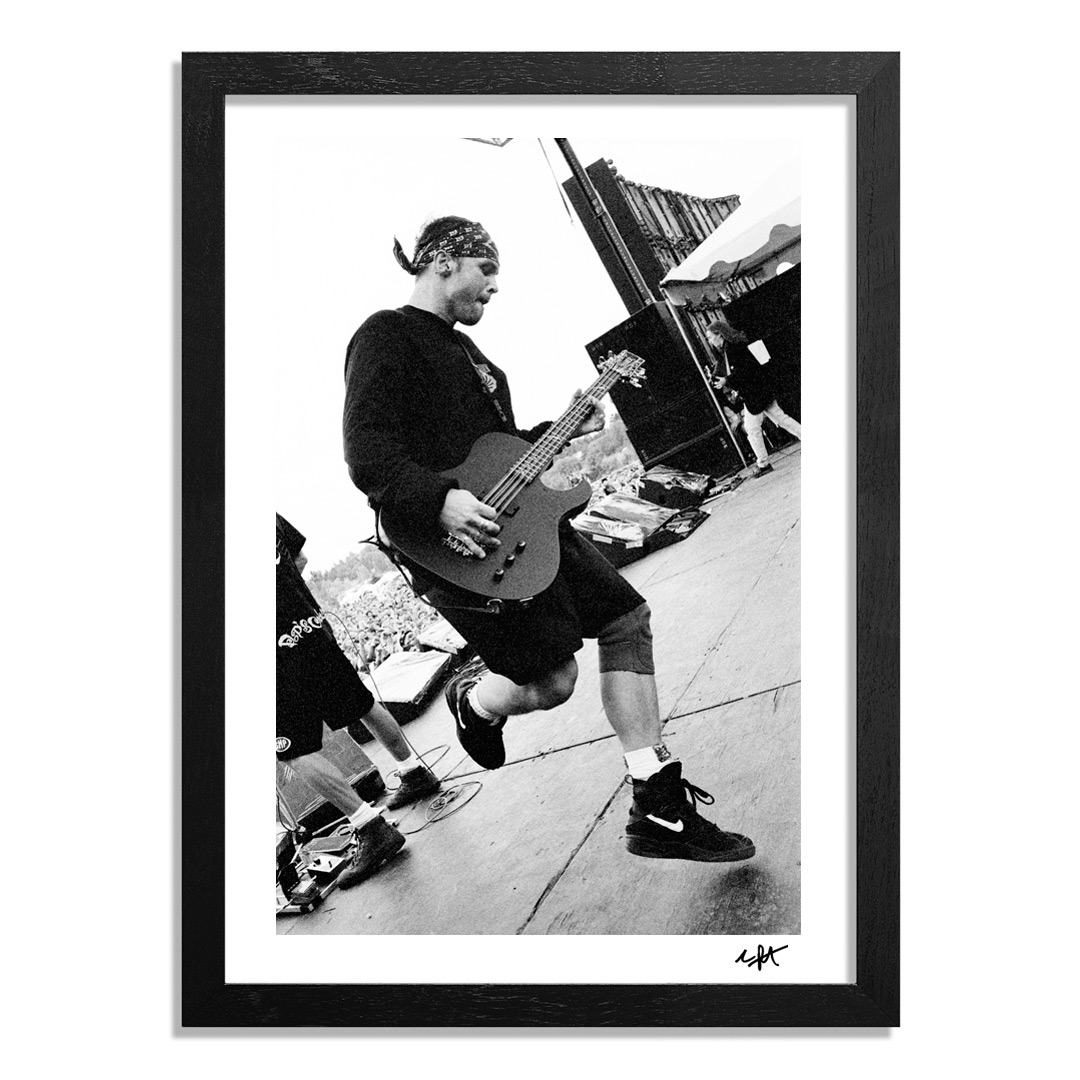 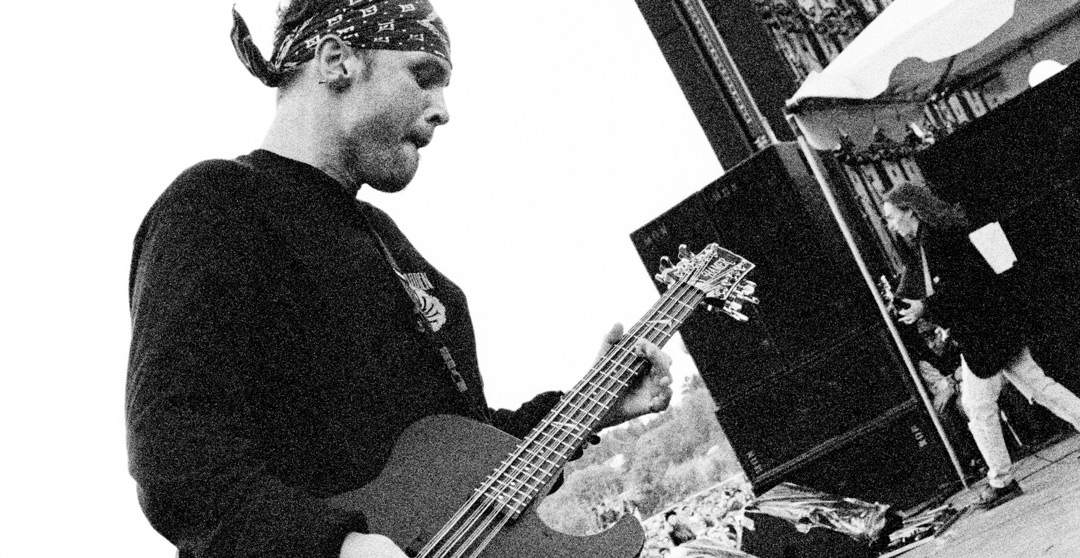 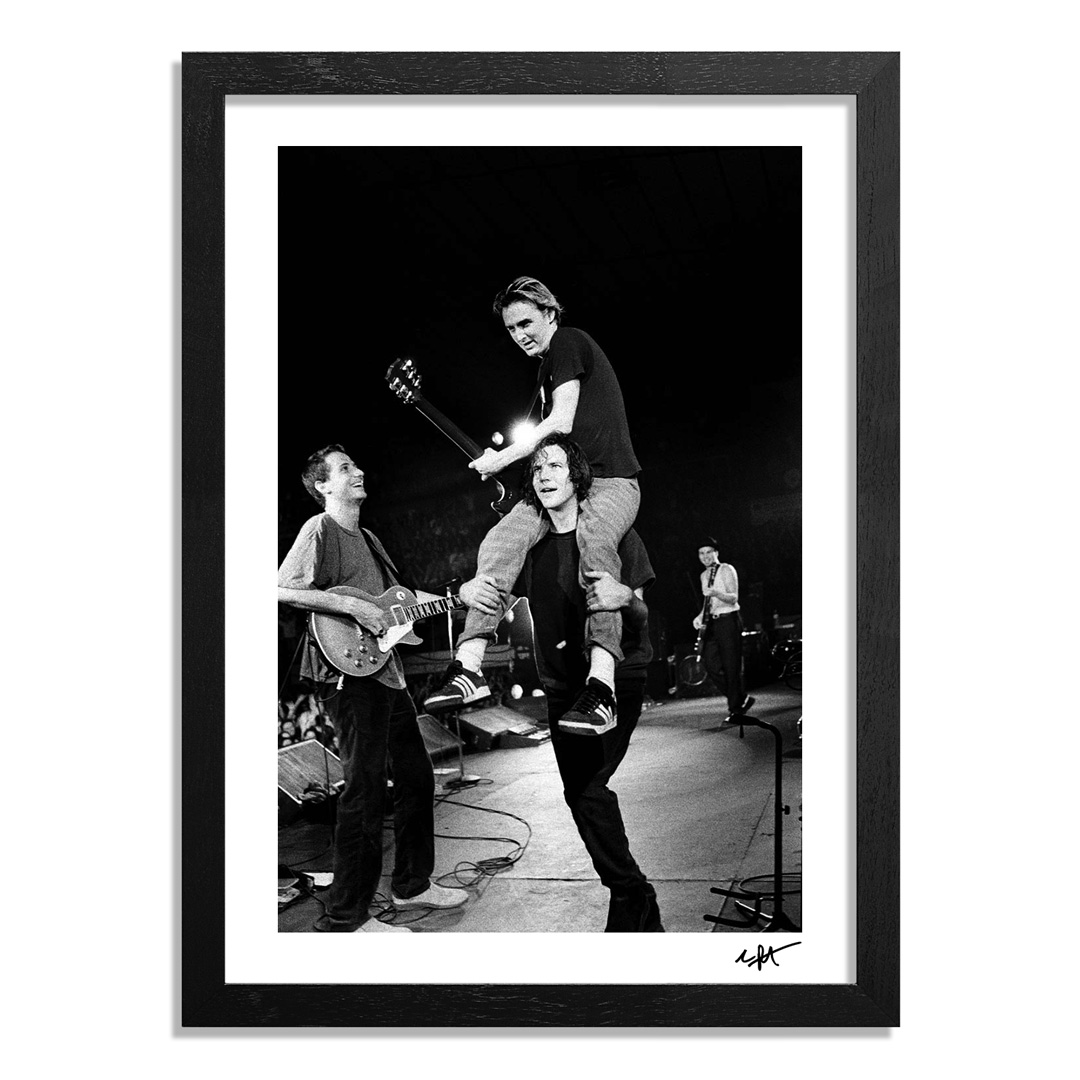 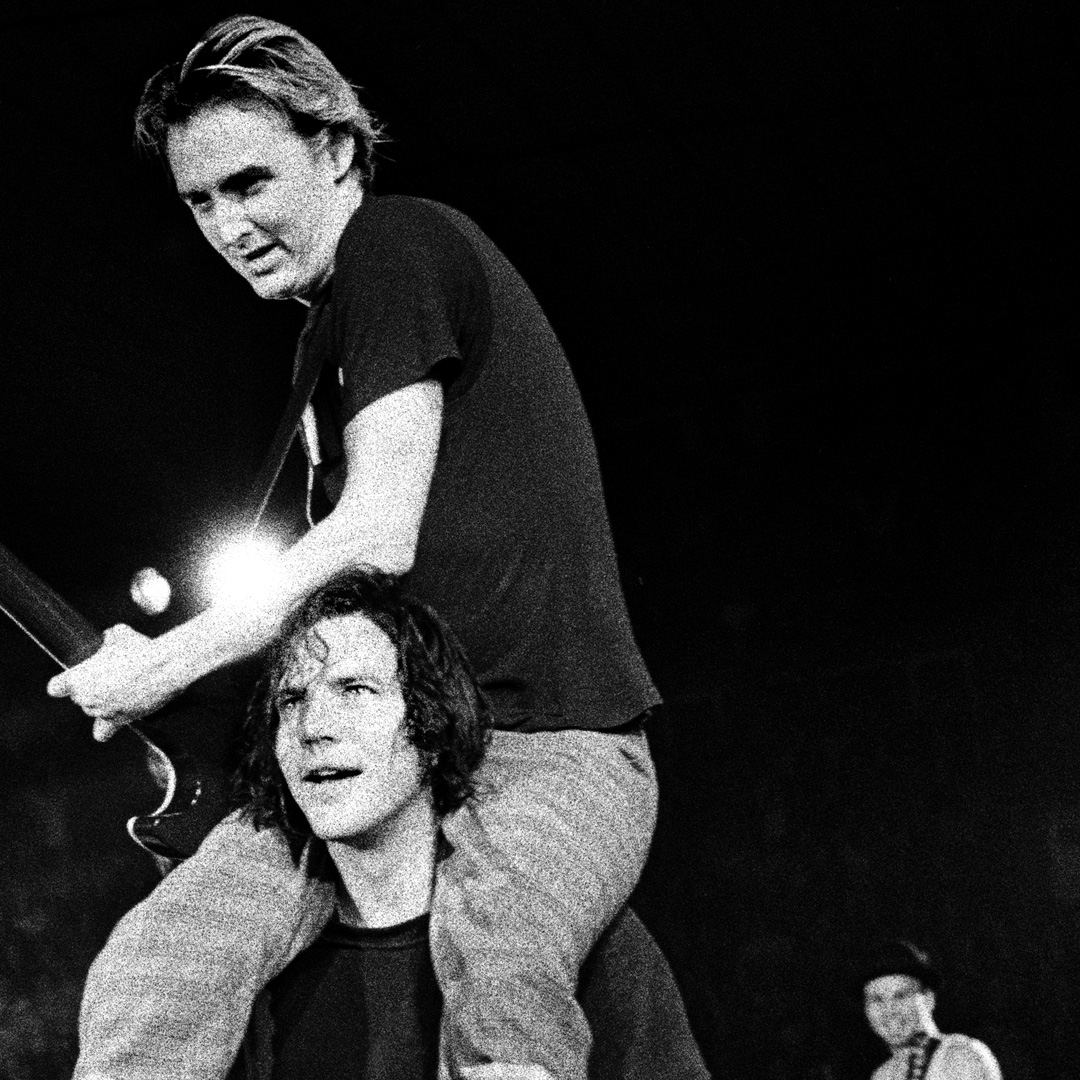 1x: When did you first start making art?
Peterson: I first started photographing at the age of 12, but embarked on making art out of my love for music in the early eighties when I was in college. I had a vision of what live music photography should/could be and pursued that relentlessly.

1x: What was your first piece?
Peterson: The first album cover I did was for Green River’s debut in 1985, “Come on Down” put out on Homestead records (Green River of course contained members of Pearl Jam and Mudhoney.) 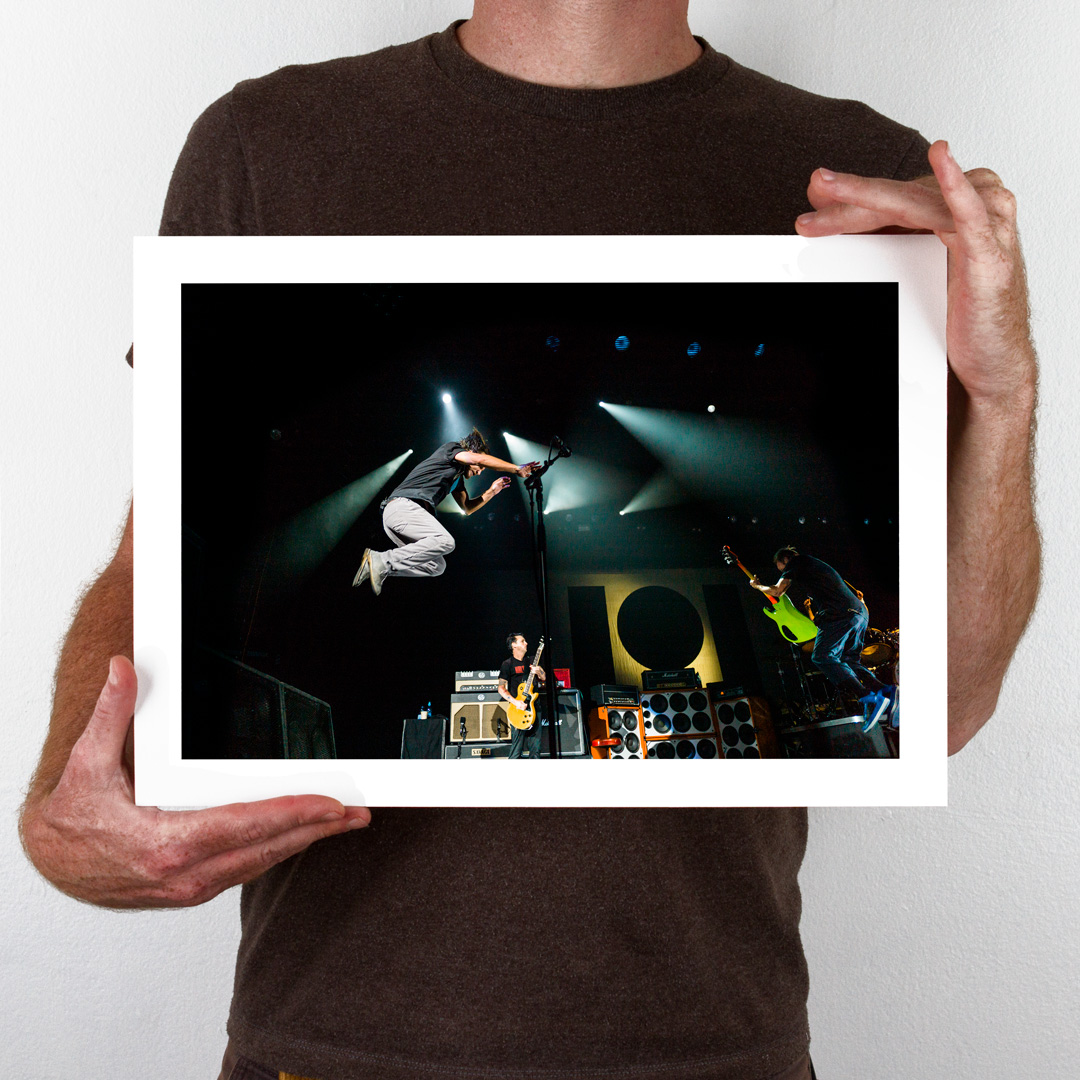 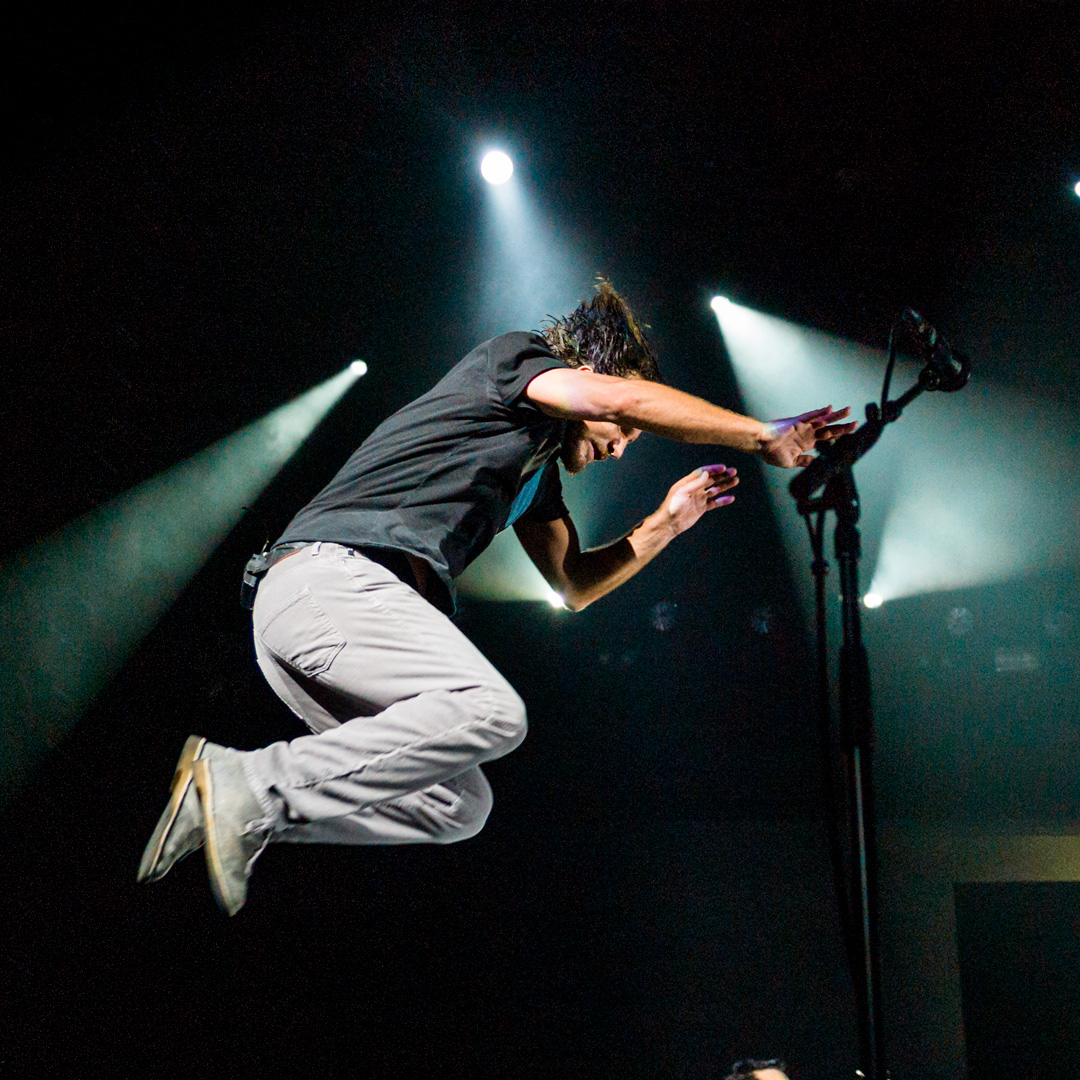 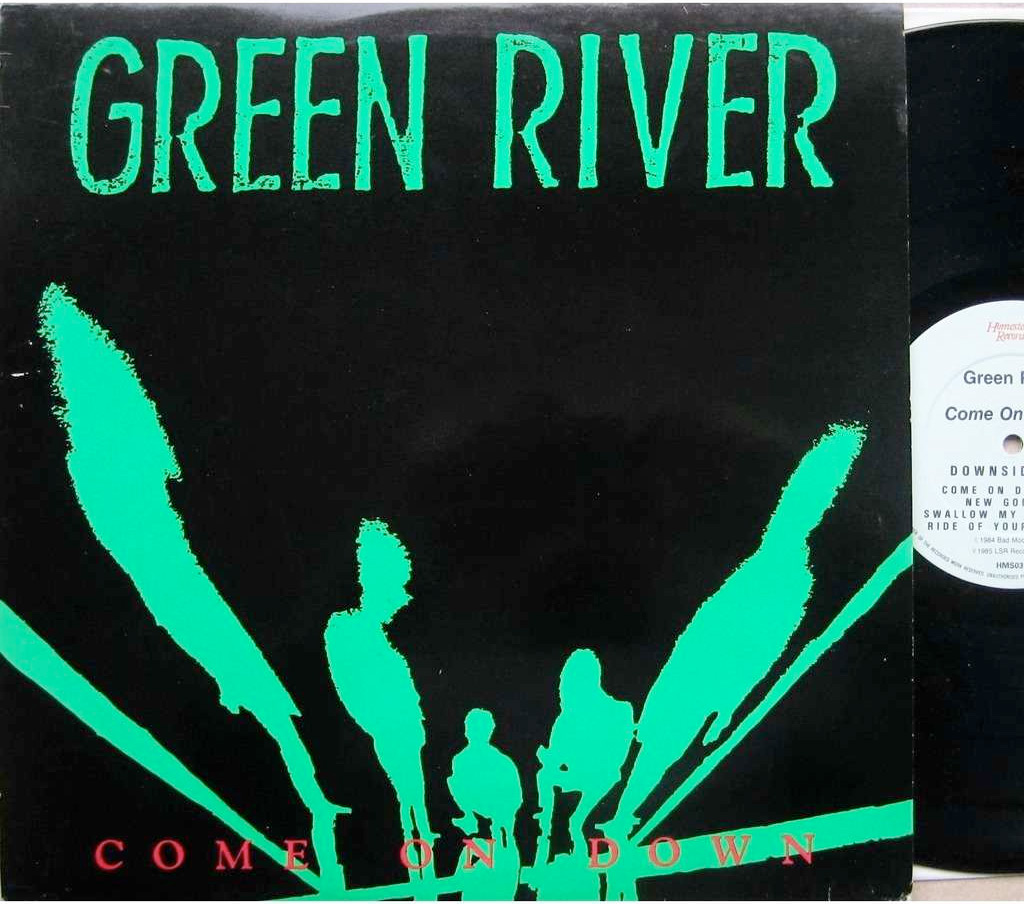 1x: What artists inspired you early on? What artist inspire you now?
Peterson: Gary Winogrand, Diane Arbus, Bob Gruen, Ed Colver and many of the Melody Maker and NME photographers of the late seventies and early eighties. Now it’s Pari Dukovic of the New Yorker, Larry Fink, Alex Webb, Gueorgui Pinkhassov and many other Magnum or Magnum style photographers.

1x: Do you listen to music while you work? If so what?
Peterson: I listen to music if I’m actually photographing a band playing, of course, but at my computer it’s mostly a mix of old Blue Note jazz, newer electronics, world music or older rock and roll. 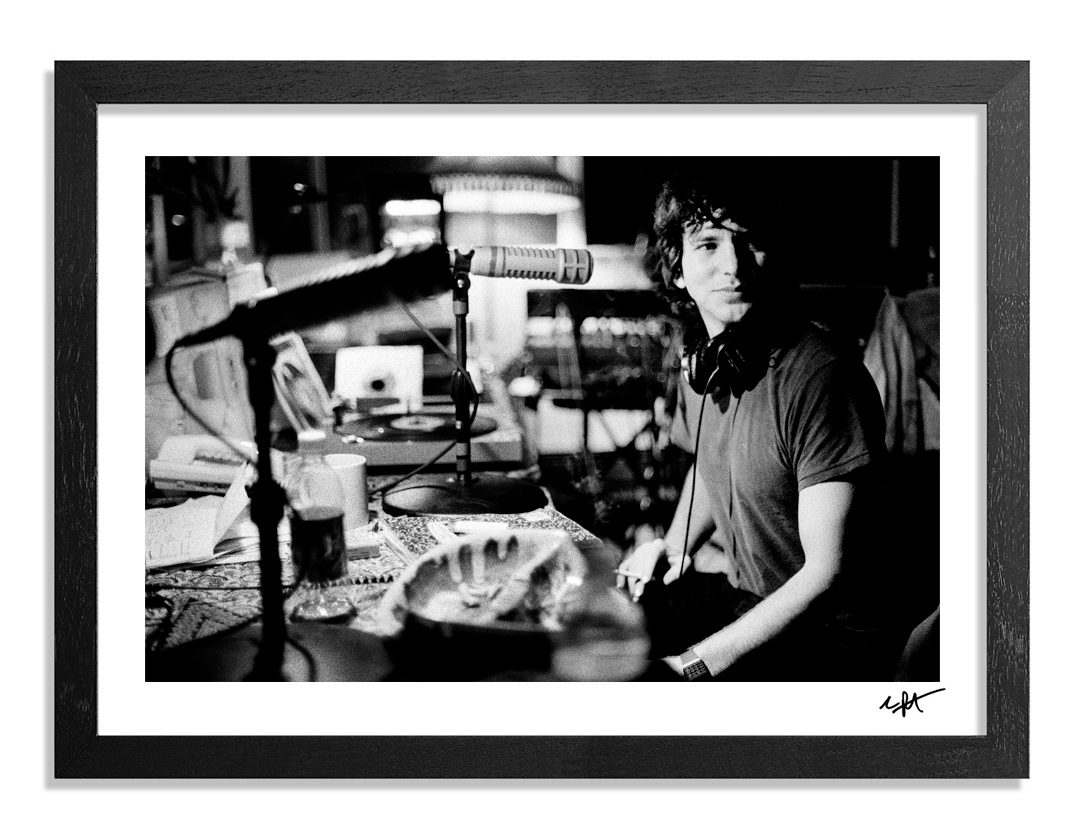 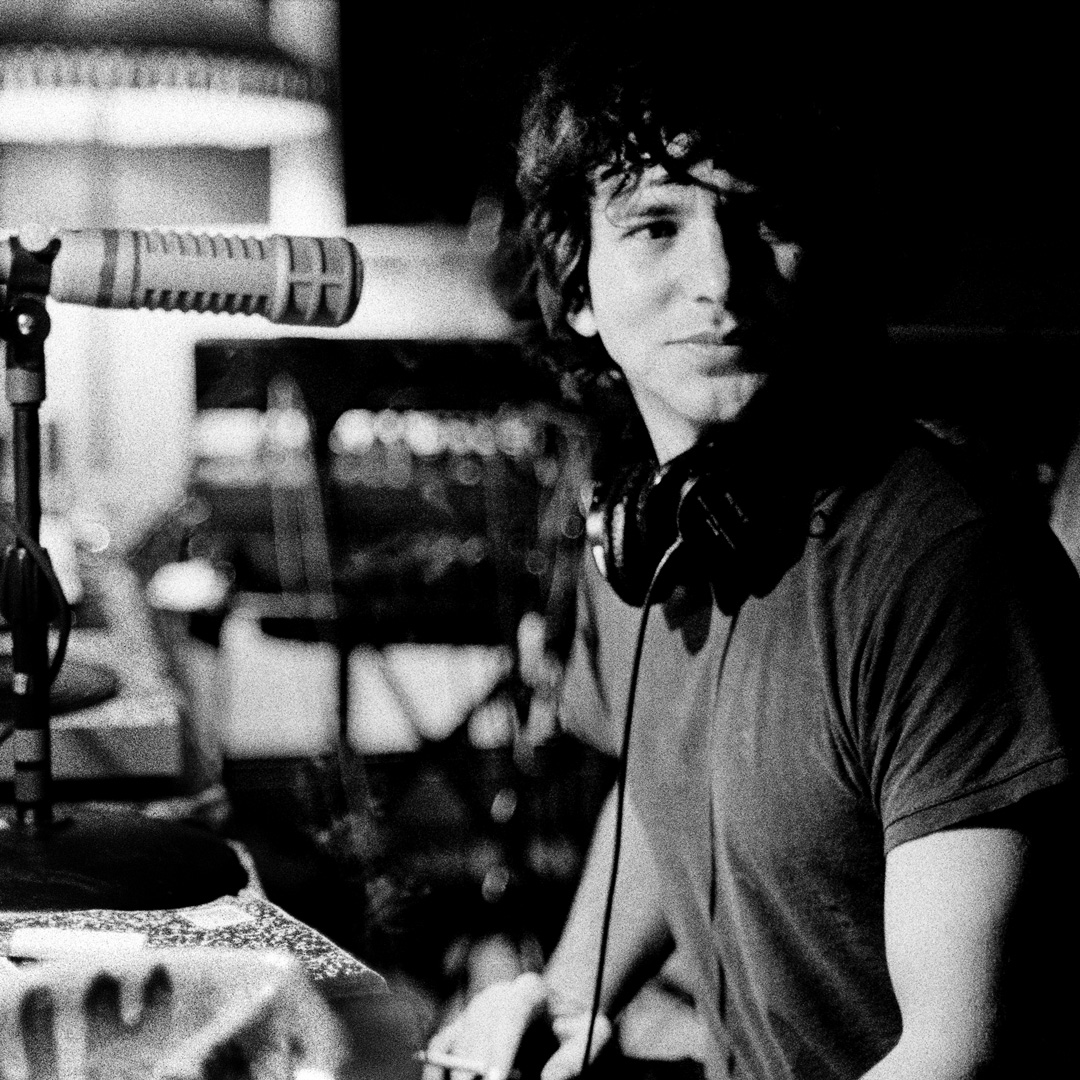 1x: If you could collaborate with any living artist who would it be and why? Any deceased artists?
Peterson: PJ Harvey. Holdover from a serious crush in the early nineties I suppose. [For the latter] Jimi Hendrix. Because I live in the neighborhood he grew up in.

1x: What was the first piece of art that you bought? The last?
Peterson: Funny, I can’t think of it. I’ve always traded with other artists, and pretty sure whatever it was I still have it. I blew a lot of money on photo books mostly. Now I limit myself to one per year! The last was a piece on plywood by some local skate artists called Shig. It was actually their display for smaller pieces, but I liked it best so bought it out from under them. Hangs on the wall next to my desk. 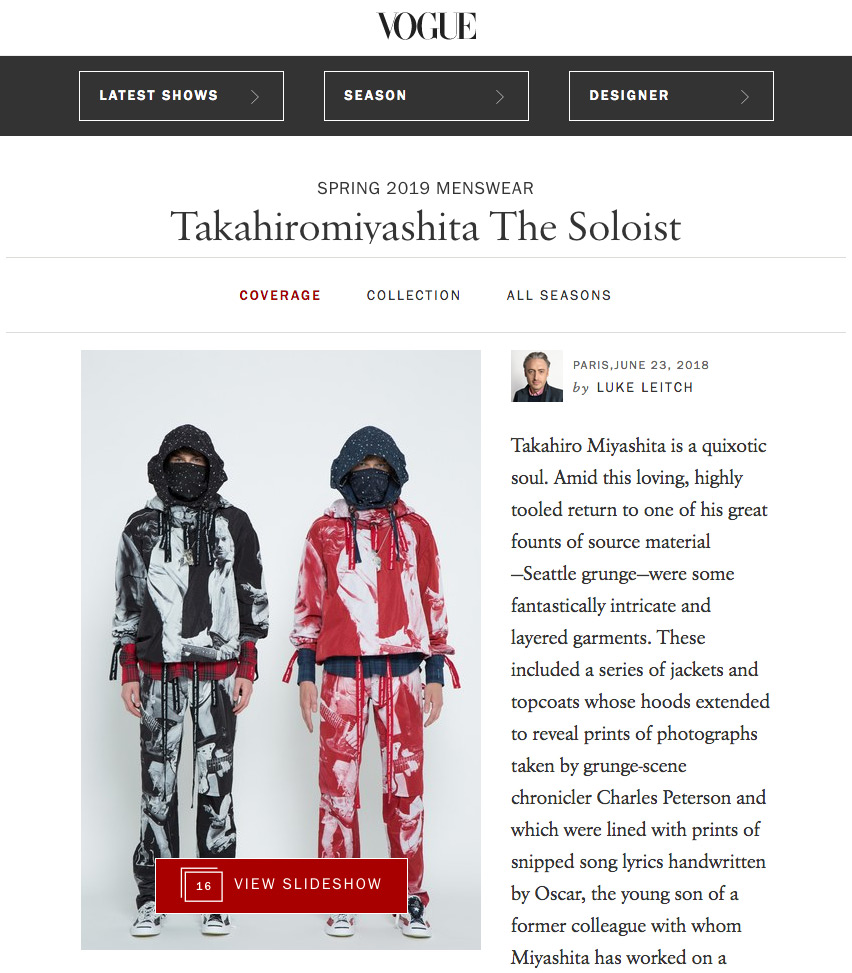 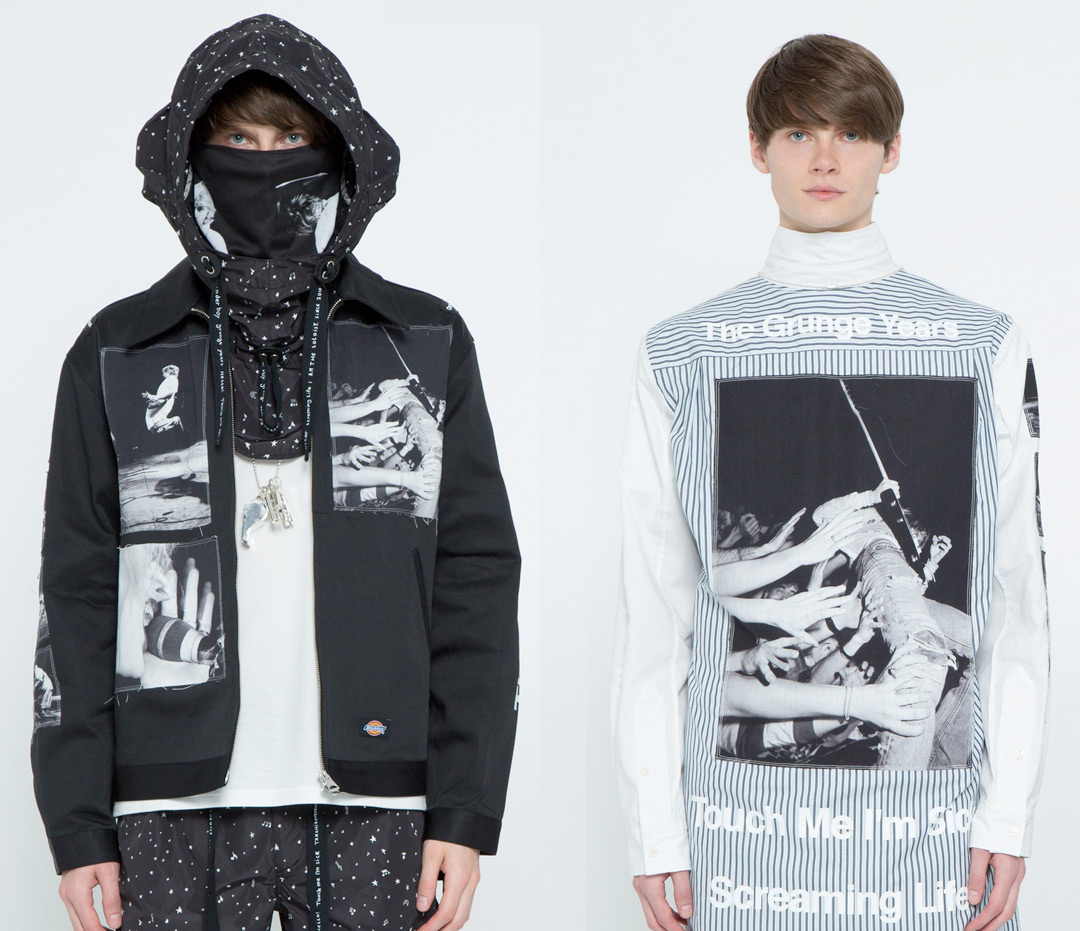 1x: Any big shows or events coming up that you’d like to share?
Peterson: I do have 50-60 images in a slide show running during the Pearl Jam exhibit that just opened here at MoPop. The thing I’m most excited about is the collaboration I just did with the Japanese designer Takahiro Miyashita, aka The Soloist. My first write up in Vogue magazine! 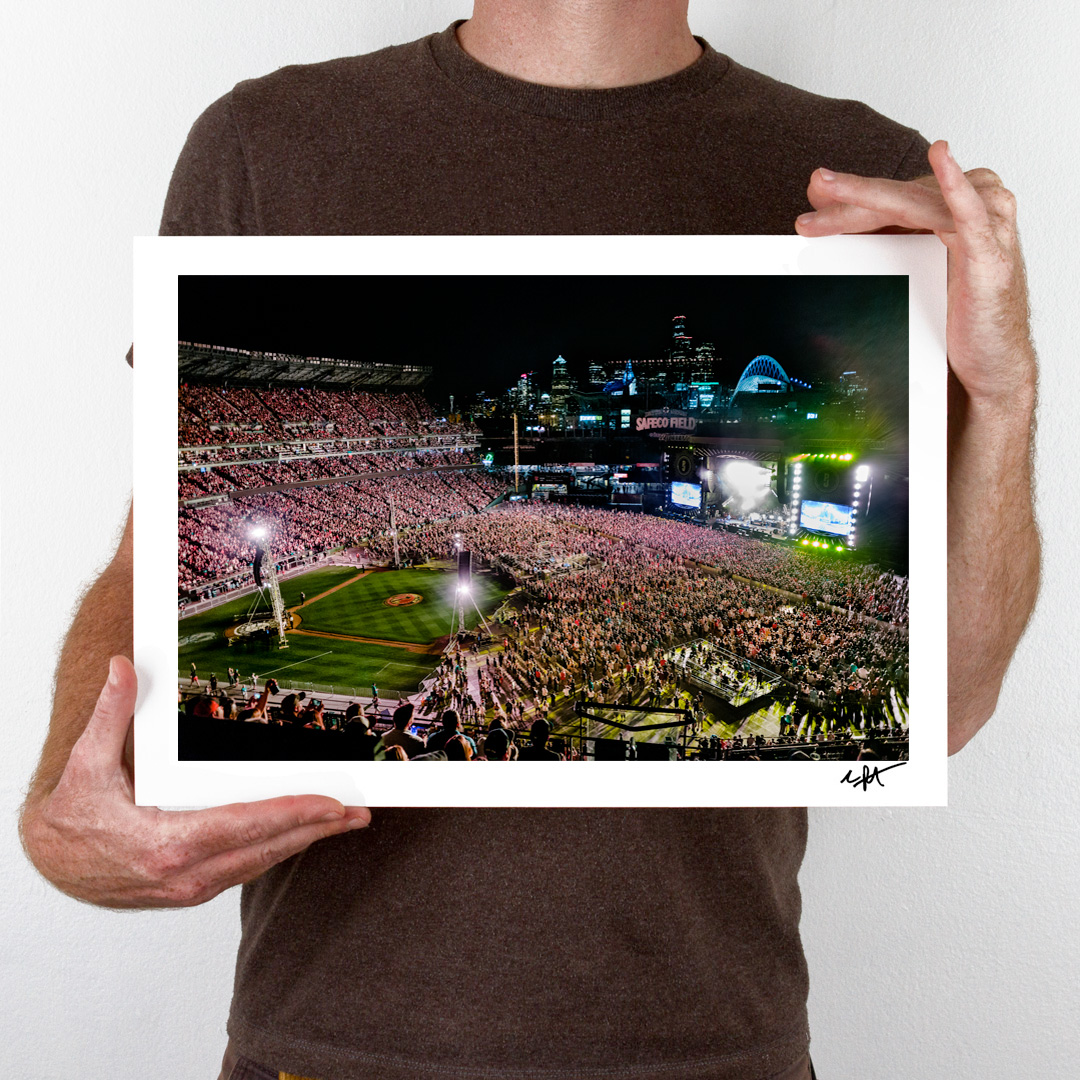 Click To Purchase Each Individually Or In A 7-Print SET!