We are extremely excited to welcome 3 of Hollywood’s heaviest hitters for The Hollywood Sound Print Series, as 1xRUN alum Slick and David Flores are joined by Los Angeles graffiti legend Chaz Bojorquez for an amazing series of new editions from three of the West Coast’s finest. A few months back, Slick tapped heavyweight lettering master Bojorquez to help add a some color to the now defunct Hollywood Sound building. Quickly the duo knocked out an monster mural featuring Slick’s iconic LA hands intertwined seamlessly with Bojorquez’s signature lettering (featuring the laundry list of artists to record in the legendary studio) but the duo still wanted to get the final piece to the puzzle, and decided to tap fellow LA artist David Flores to get into the mix. Flores and Bojorquez wrapped the corner and immortalized none other than the one the only, Ol’ Blue Eyes Frank Sinatra…

In addition to Sinatra, the studio’s legendary recording history extends to dozens of notable artists including Prince, Michael Jackson, The Jackson Five, The Doors, Jackson Browne, Natalie Cole, Iggy Pop, Slayer, Olivia Newton John, Boz Scaggs, Bonnie Raitt, Mick Jagger, Red Hot Chili Peppers, Madonna, Tracy Chapman, System Of A Down, Danzig, Rick James, Weezer, Faith Evans, Barbara Streisand and hundreds of other celebrity artists who carved out recording history at the studios with more Grammys, gold and platinum albums than you can count.  We caught up with the trio to discuss their latest release that captures The Hollywood Sound. Check out the release schedule below

Note: All releases drop at 12pm EST.
Limited quantities of 3-print sets will be also available with each release.

1xRUN: Tell us a little bit about this series and the wall that these prints are inspired by?
Chaz Bojorquez: Slick and I had just finished designing an interior of a club in Honolulu and wanted to continue our momentum doing some art together. We met in Hollywood with his friend Orlando who managed the Hollywood Recording Studio and we talked about doing a mural, Slick brought in David Flores a bit later. I don’t consider myself a muralist, but I’ve tagged a lot of walls, and thinking back I remembered that I had personal history with this studio so I got very interested in this project.

I was a hippie in the 60’s and my twin brother had a band so I went to all the clubs in Hollywood where I saw The Doors, Hendrix, The Byrds, Led Zeppelin and all the bands of that era. Later in the 80’s I met Jackson Browne recording his first album and Joan Jett at that same recording studio. Around the corner was Shelley’s Manhole jazz club that I would also frequent, so the Hollywood Recording Studio was very familiar place to me.
Slick: The C/S wall was the inspiration for the new print collaboration. Chaz is a real OG in this game and helped bring “cholo” style writing into the world of “fine art.” When Orlando from O Gallery hit me up with the project, I was very excited about the building and it’s history. So many legends have recorded there. I thought I’d bring in a letterist to compliment the hand stuff I’ve been doin’ lately. Chaz is the top dog in the hierarchy of west coast hand style writing and I felt the world needed to know. C/S means con safos, “with respect” in Spanish, but in this case, it’s Chaz/Slick or Cahuenga/Selma, the cross streets of O Gallery. The wall is a mash of Slick hands and Chaz lettering depicting the various artists that recorded at the historic Hollywood sound Recorders.
David Flores:  The wall was inspired by music. Chaz and Slick were hammering away, I just got in and did a request like a DJ.

1x: What materials were used to create this wall and the subsequent prints?
Slick: The wall is painted with outdoor latex paint and my weapon of choice is MTN 94 spray paint. The prints are 7-9 color silk screened prints. I personally prefer the art of screening especially in this digital age. Screening has become an art form all of its own.
Flores: Spray paint on the wall. Roller on the background. 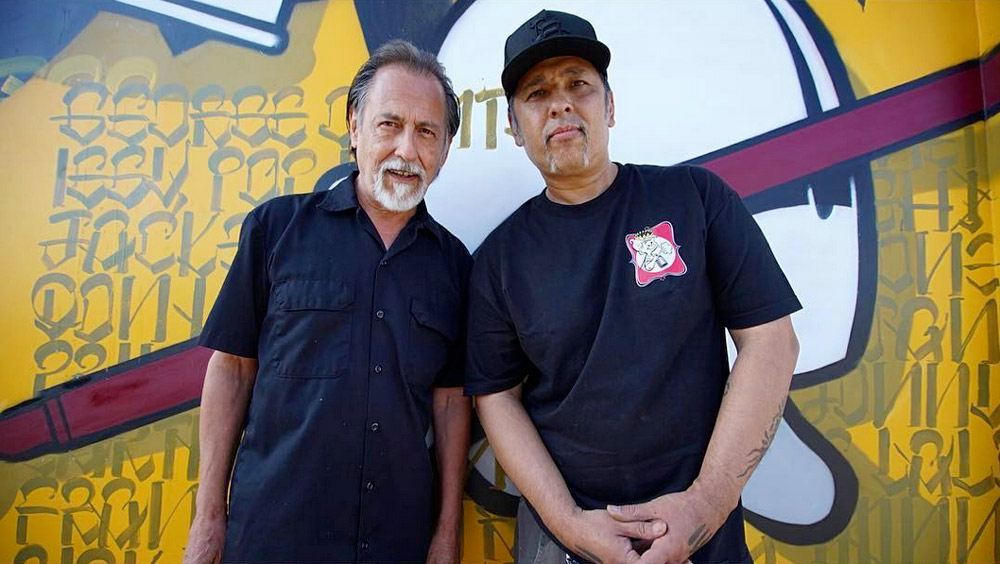 1x: When was the wall drawn and created?
Slick: The C/S wall we did a few months back. Chaz and I had been talking about doing something together for a minute. The David x Chaz wall came about while we were painting the C/S mural. We were looking for someone to compliment our mural when David and Olivia drove up to say hi. I love when things come together organically and not so planned.
Flores: This past June.

1x: Anything immediate you would like us to highlight about this series?
Bojorquez: I’m an old Hollywood guy, we would cruise the boulevard in the 60’s and saw a lot of legions walking around. The Hollywood Recording Studio had recorded ‘Everyone’ and looking at the list of recording artist was explosive! I wanted to paint every name on that wall because they were all my heroes on TV and radio. Artist like; Rick James, Marvin Gaye, Tom Jones, Sheena Easton, Madonna, Sinatra, Hubbard, Streisand, Parliament, Temptations, Dion, Michael Jackson, Ray Charles and hundreds more. The morning I was to paint the name Prince, he had also died, a very spiritual coincidence.
Slick: I feel the design beautifully captures both Chaz and my personalities. Each print is strong enough to stand on it’s own but as a set…..bam!
Flores: The art of the mural is a major movement. Lots of aspects regarding said movement are being rapidly watered down. Murals like this one are true works of art with no corporate affiliation. Pure art, protecting the art form. 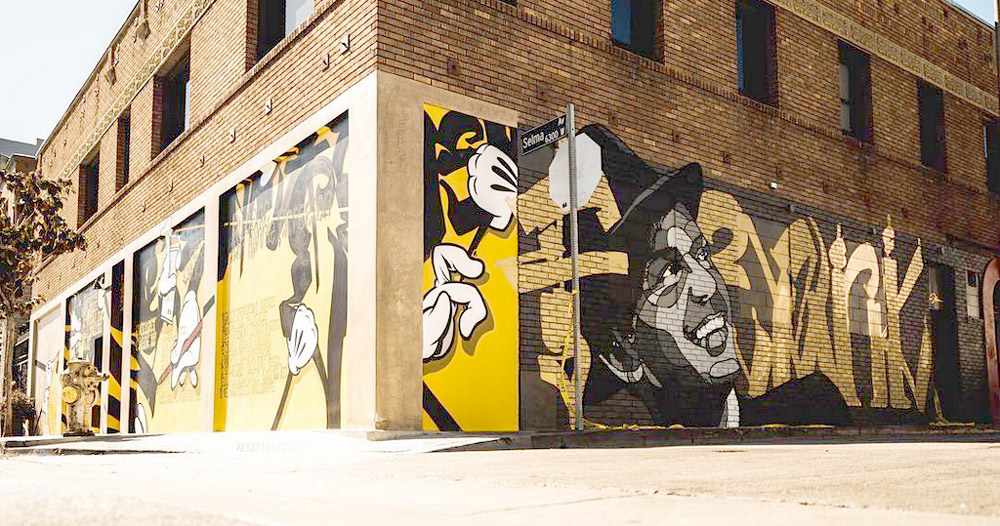 1x: Tell us how the idea and execution came about?
Bojorquez: Slick had ask me to join him to paint a mural at the Hollywood Recording Studio, and at first I was not interested at all. My main focus in my art career right now is to paint on canvas. I currently have my paintings in many permanent museum collections, and see my life legacy with paintings not products or murals, my work and perspective has changed once I had my 65th birthday and very particular on the projects I pick. I told Slick that I was only interested if we “paint a mural that looks different and we have a lot of fun doing it.” Slick did the layout and when he showed me for the first time it looked funny, witty and using both of our styles together without taking ourselves too serious. Perfect!
Slick: Normally a wall that size I can knock out in a few days but due to Chaz and my busy schedule, it ended up taking a few weeks. Chaz is a perfectionist and he wanted to get the names just right.
Flores: I just thought about Chaz’s letters huge in back of and intertwining them with a piece of Frank Sinatra. I just love Sinatra, and the FRANK letters Chaz did were just real easy to work with. It’s hard to fuck up when you got that kinda skill and experience on your side. I think we both just kinda looked at each other and agreed on Sinatra.

1x: How long did this wall take from start to finish?
Slick:  I wanted to capture the essence of the mural in 3 prints. The actual mural was painted on 4 panels, so I combined elements from the original concept sketch along with a few photo elements from the wall. I don’t often make prints from photos of walls. They never quite capture it so you have to take artistic liberties to do what ever you need to make it pop.
Flores: Two days for me.

1x: What is unique about this piece compared with some of your other work?
Slick: I think to see me and Chaz on one piece is pretty amazing in itself. For me anyway!
Flores: This is a collaboration with a couple legends vs. doing a mural all on my own.

1x: Why should people buy one of these prints?
Slick: People should buy because they love the art and to support what we do as artists. If you like our free public art, then buy a print or even better yet, a painting from an artist doing their thing on the streets. Buying to flip is ok I guess, but jacks up the price for those who love the art.
Flores: I feel its going to be something you wish you had gotten if you pass up on the chance. 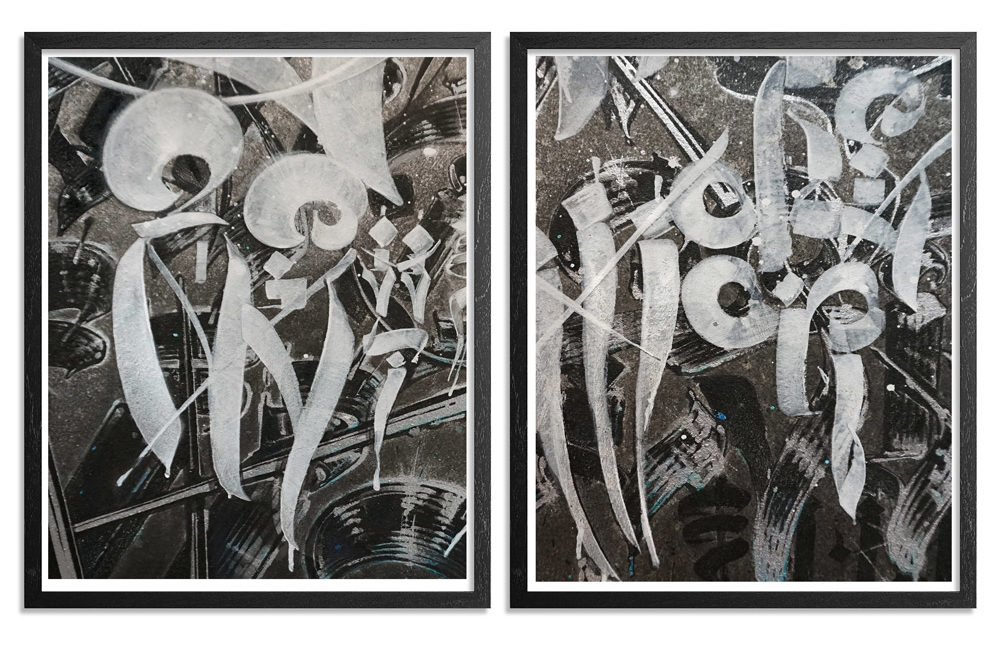 1x: All of you are staying constantly busy, what has been going on this year for each of you?
Slick: More Slickness.
Flores: Traveling, collecting and restoring old VWs. Painting. I just got back from Mexico City where I did a 5-story mural. That shit was epic. Ai Wei Wei took a selfie with that piece. Next I’m headed to Tokyo, Alaska and New York City all to paint.

1x: What have you been listening to in the studio lately?
Slick: You’d trip on my playlist because it’s pretty random. Everything from DJ Shadow to Weird Al, Jon Murphy to Mr. Oizo, Killing Joke to the Gaslamp Killer, 2mex to Marilyn Manson, RTJ to the Dug Dugs, Tech 9 to Watch the Duck, Queens of the Stone age to Danny Brown, System of a Down to Styles of Beyond. Like I said, random AF lol!
Flores: Band of Horses, John Frusciante, Kanye West, The Bee Gees, Buddha Bar, J Cole, Red Hot Chili Peppers, Deep Purple, EPMD and Slim Jesus among others. 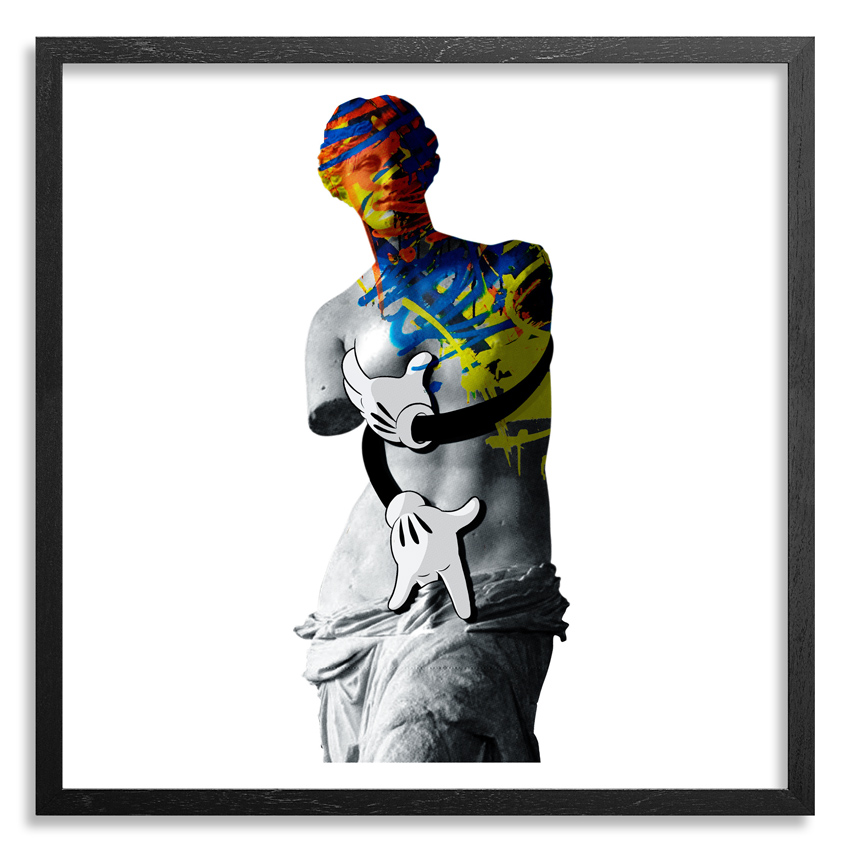 1x: Any recent strides that you’ve made in your work that you’re particularly happy about?
Slick: I’m really excited to work in 3d lately. To see some of paintings live in a 3d space is pretty sick.
Flores: Just going bigger and bigger…feels good man.

1x: What was the last piece of art that you bought?
Slick:  My Kaws Dissected Companion 4 footer. Not because I collect art but because I like toys.
Flores: Two Cleon Peterson prints. 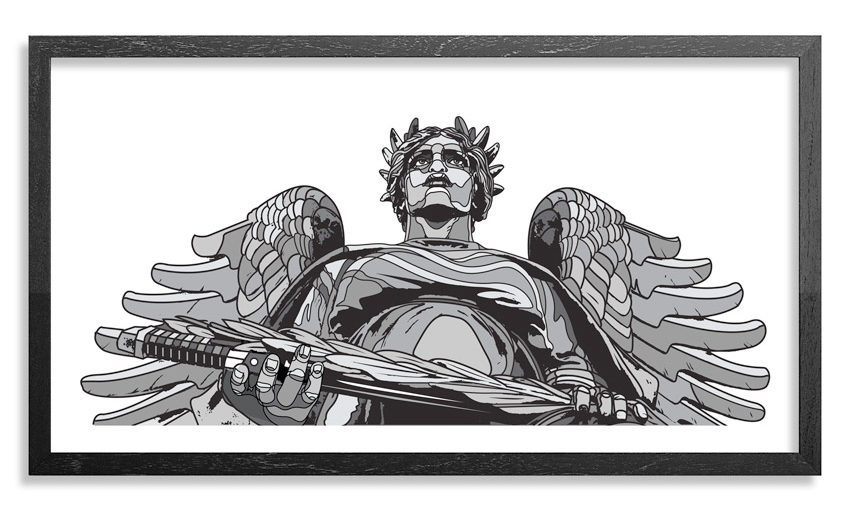 1x: What else is on tap for each of you this year? Any big events or shows?
Bojorquez: Some of the projects this year have been a new direction for me. The Smithsonian Archives Museum in Washington D.C. collected all of the lectures, design drawings, invites and photos for their permanent collection, also the Smithsonian History Museum picked all of my shoes, clothes and products for their collection too. My second art book ‘Chaz Bojorquez’ has been released and have book signing engagements. My artwork is on exhibit at many museums and galleries around the world including sales at the Paris auction houses.
Slick: I’m exhibiting with some heavy hitters at LA Louver this coming November. I’m really excited to show with the crew and exhibit for an audience that I normally wouldn’t. Thanks Gajin!
Flores: Keep hammering away so one day I’ll be in all those museums with Chaz. Try not to get sick, travel lighter and lighter. I’m learning that one. Focusing on canvases and forms, working and traveling. Finished the piece for the recent Lancaster MOAH exhibition and I’ve got a few more coming up soon.

1x: Anything else we may have left out that you want to touch on?
Slick: If you’re in LA on September 9th, come down to the O Gallery aka the historic Hollywood Sound for some art, music, drinks and food for our official print kick off and mural unveiling! 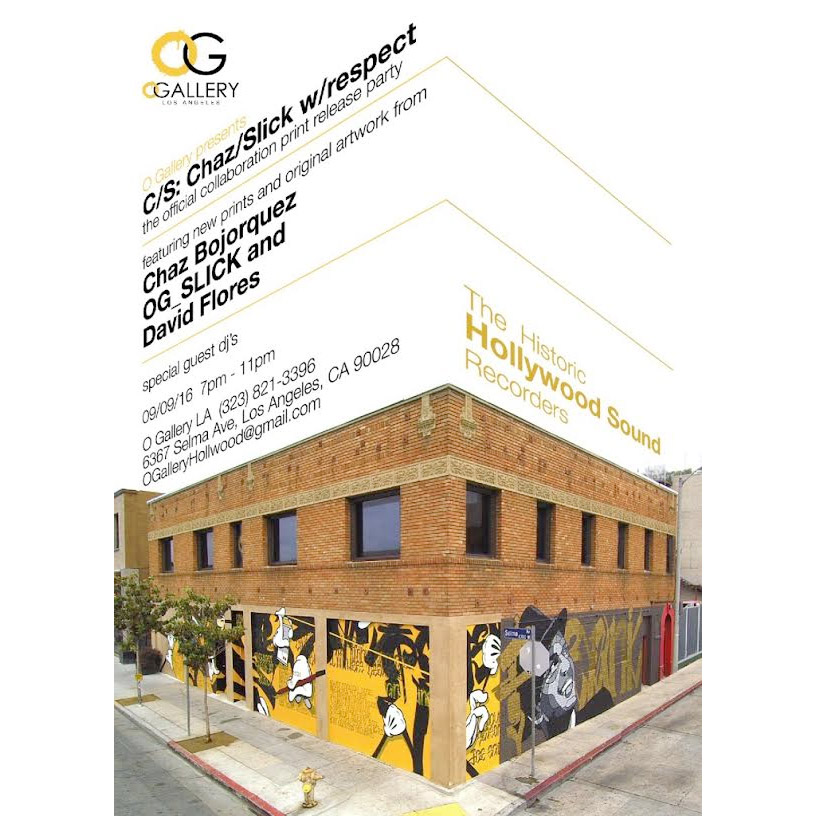