To say the least artist Dasic Fernandez has been a force to be reckoned with in 2016 with murals around the world. His massive floods of color have topped year and city “best of” lists and his work has become instantly recognizable on the streets. We’re excited to partner up with Dasic on his very first print release ever, The Covenant. Available in a standard and hand-embellished edition, this image marks a period of transition for Dasic as he has begun mixing two of his favorite styles into one unique voice. Read on as Dasic gives us the lowdown on The Covenant and lots more . . . 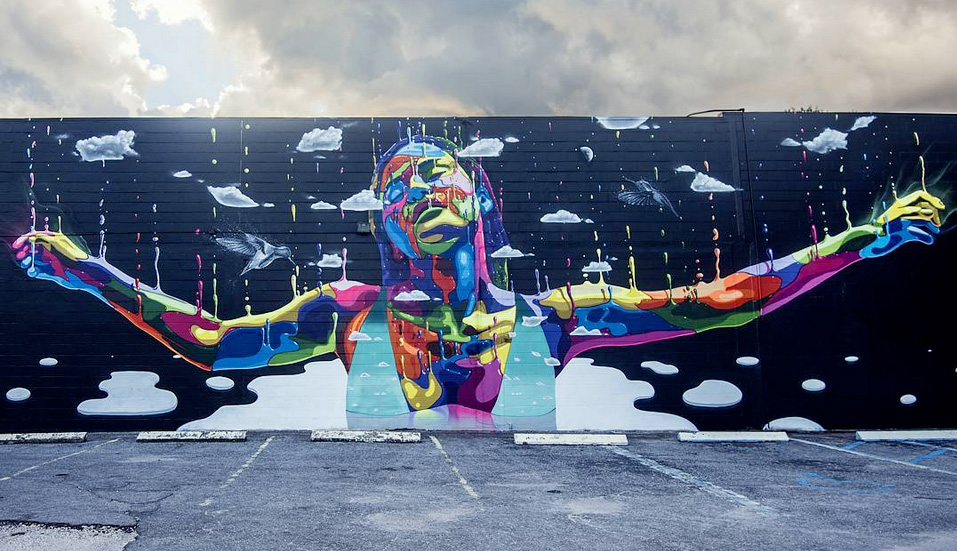 1x: Tell us a little bit about this piece, anything immediate you would like us to highlight about this image?
Dasic Fernandez: This piece means the beginning of mixing at least two of the styles that I’ve been working on for years already. To me means the unity in between the aesthetic and the message, it’s an agreement, a covenant assuming the responsibility of putting both sides together, the beauty and the content, and move forward with it. To me painting in the streets carry both responsibilities, social and artistic.

1x: Was this body of work part of a recent theme, series or show that you had?
Dasic: It is not part of a series but it is part of this period of time in my life, as I was tagging everything when I was 14 years old now I’m creating this type of images.

1x: What materials were used to create these pieces and when were they created?
Dasic: It was made on canvas using mostly acrylic paint, with some touches and effects of spray paint. This specific one was created over the course of a year between 2014 and 2015. 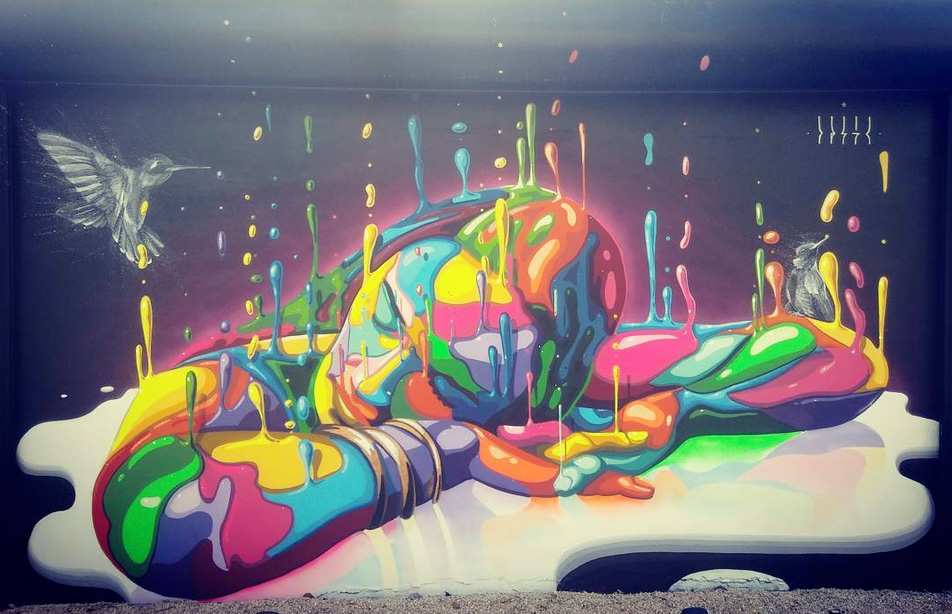 1x: Tell us how the idea and execution came about for this body of work?
Dasic: From Mom and Dad I come from from very strong families: one is very political and was very active in the resistance against the dictatorship in Chile and the other one is a very religious family; both very committed with their causes. So I realized that I’m a consequence of the education that I got at home and my body of work is directly related with it. So now I consciously look for the mix of both sides and I’m creating images consequently.

1x: How long did each of these pieces take?
Dasic: Around 4 or 5 days. But this piece I didn’t paint it straight so I was just keep working on it in between many other pieces that I was working on. 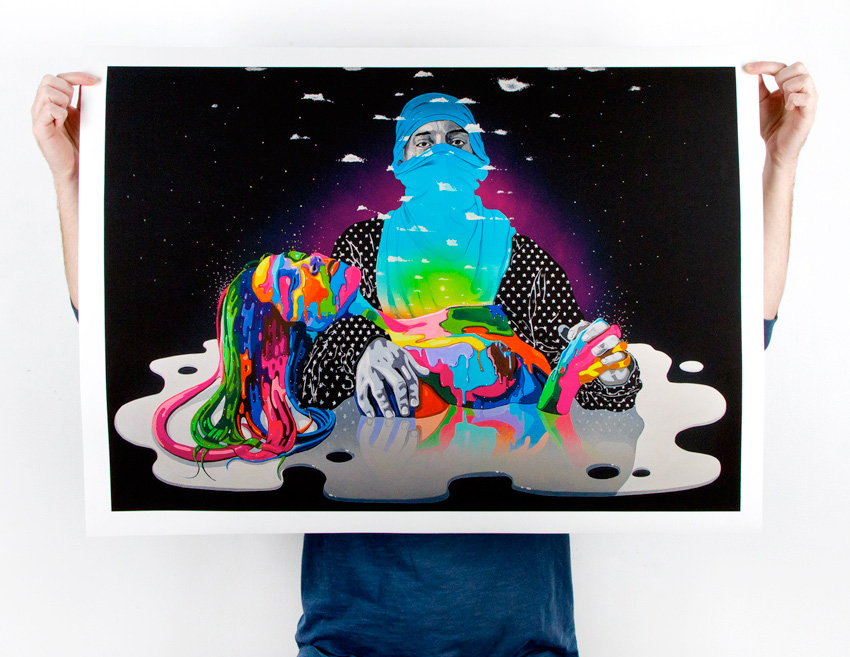 The Covenant – Hand-Embellished Edition by Dasic – SOLD OUT!

1x: What is unique about this piece compared with your other work??
Dasic: I think all the work is unique, but each one represent a different time of my life, this particular piece is the first one of this period of time and that’s why to me is even more valuable.

1x: Why should people buy this one of these print?
Dasic: Because is my very first print! I didn’t do it before for a reason and there will not be to many in the future either. The good thing of prints is that they are affordable and actually the big size version of this print has more work on it because I added neon on top so every print is unique. 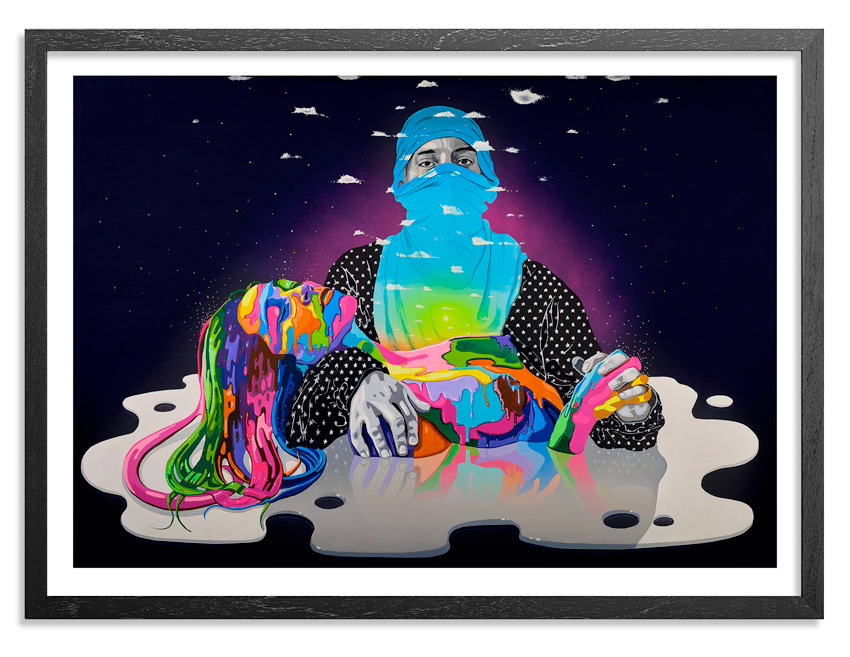 The Covenant – Standard Edition by Dasic – Click To Purchase

1x: When did you first start making art?
Dasic: All of my life. As far back as I can remember. But I started hitting the streets when I was 14 years old…17 years ago already.

1x: What was your first piece?
Dasic: It was a 3D letter piece with a background of an sky with clouds as I still use in my work today. I love clouds.

1x: What artists inspired you early on?
Dasic: My own friends, with the ones we used to compete with drawings and graffiti. When I was a kid probably Cekis was a big influence with his letters. But I always liked older artists like Matta, Van Gogh, Monet, Kandinsky, Raphael and many more.

1x: What artists inspire you now?
Dasic: The same ones, if I want to look to art I still look at the masters. I like to understand history through art. Right now is my mission to paint the history so I don’t look much to artists around, just my closer friends mostly because of the respect that I have for them and their work. But I have to say that what really inspire me is the people and their potential, I like to observe people vibrating and understanding what makes them happy, I like to look at my daughter and feel how I melt away like my paintings and we become one because I understand that we are all made out of the same thing, energy. Artists that inspire me now are musicians, fashion designers or artists that don’t precisely paint. We are living in a precious moment in history, where people is starting again to look inside as they look to the universe to find answers. A lot of young people coming out of college don’t want to work for anyone, so many people wants to travel and do something that they really love to do and be happy with it…I feel that finally we are starting to change the old paradigms.

1x: Do you listen to music while you work? If so what?
Dasic: I do! It has to be as loud as possible. Painting and dancing are the same thing to me when I’m working. To me music works better than coffee or energy drinks. I listen to jazz, rap, trap, soul, funky, bossa nova, house, folklore and whatever that stimulate me or evoke me some moment in my life.

1x: If you could collaborate with any living artist who would it be and why?
Dasic: For some time already I want to collaborate with Lola from Brooklyn. She is a 8 years old street artist that have been painting the streets for a couple of years already. But we talk with the family and we are painting a wall as soon as the weather gets better. It scare the shit out of me because of the extreme respect that I have for the children in general, they are so much better than us and this particular little lady started to paint from way younger that I was when I painted out for first time. I look for honesty and purity in an artist so who can be better than a child?

1x: If you could collaborate with any deceased artists who would it be and why?
Dasic: Tough question. I don’t think I would be brave enough to collaborate with any of the masters. I would be happy assisting them or just watching them painting or even just sharing a drink and listen to them. If I have to pick up one it would be Roberto Matta or Vincent Van Gogh.

1x: What was the first piece of art that you bought? Do you still have it?
Dasic: The only pieces that I keep are the ones that my friends give me, that’s already enough.

1x: What was the last piece of art that you bought?
Dasic: Right now if I buy a piece is to resell, I prefer to keep it in the low, but I like to sell some pieces of young artists to my collectors, if I had more time I would do it more often.

1x: Any big shows or events coming up that you’d like to share?
Dasic: I’m currently opening a creative agency in Chile so for the next month I’ll be focusing on that. I’m moving my studio to the agency also and I’ll have my own gallery there to show pieces before they fly out. And of course I’ll be doing a lot of studio work in between. I’ll be also visiting Miami, Toronto NY and LA. For February I’ll be painting a big mural in Times Square and then seems like I’ll be in Haiti and then China for an artist residence.

1x: Where else can people find you?
Dasic Fernandez: – Website – Intsagram @dasic