We welcome back Detroit legend Niagara as she returns with her latest limited edition, This Band Sucks. Pulled from one of Orbit Magazine’s covers, Niagara’s latest edition drops as we approach Record Store Day this April, with a sentiment that many can relate to. Paired with the Midnight Edition we also have a deluxe box set from Niagara’s protopunk outfit Destroy All Monsters pressed on heavyweight vinyl in a deluxe 3LP box set. Also be sure to check out the 10 hand-painted covers from the multi-talented frontwoman, and read on for much more below as Niagara gives us the lowdown on her latest edition and lots more. . . 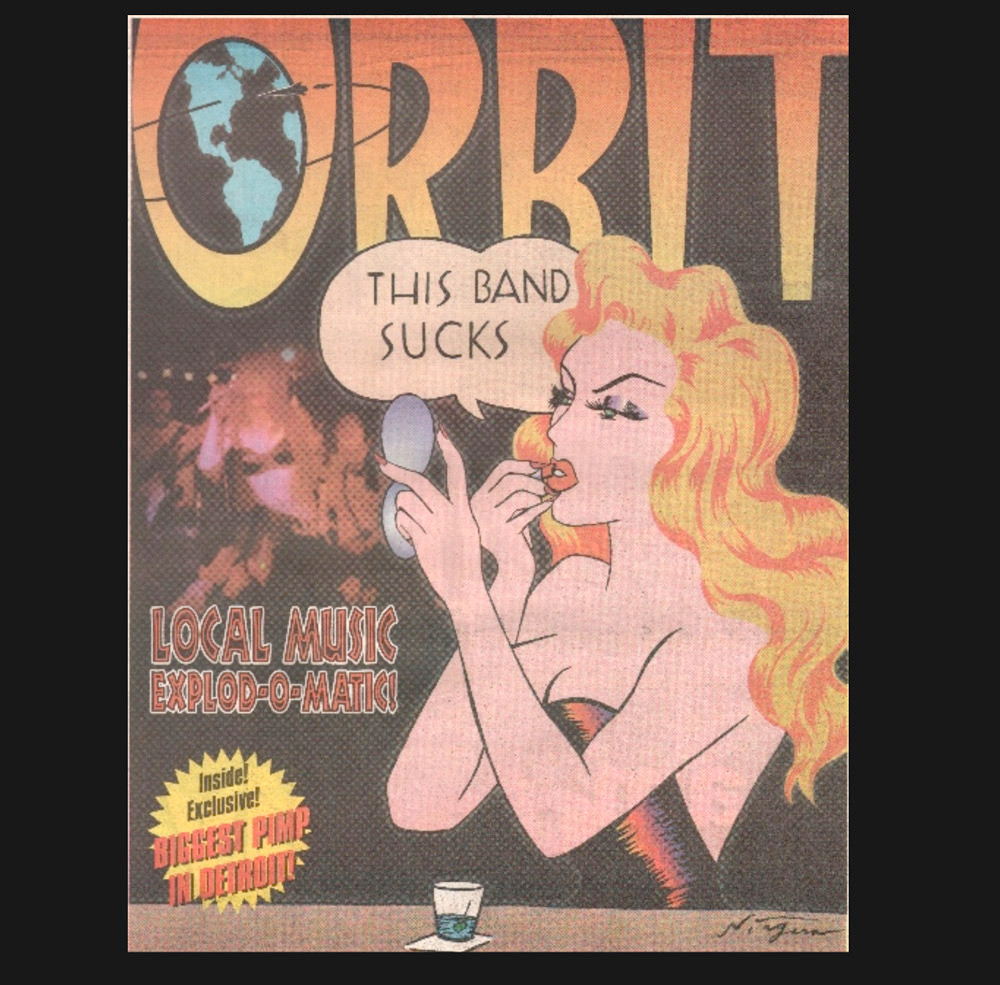 1x Thru Interview
This Band Sucks – Midnight Edition by Niagara

1xRUN: Tell us a little bit about this piece, when was this image first painted?
Niagara: Oh, no. Already I don’t even know what we’re talking about…it was on the cover for Orbit Magazine. Jerry Vile did this local magazine that was so wonderful. It was. I did covers for them once in a while. I forgot what he wanted. It was something to do with rock ‘n roll or punk. So I came up with “This Band Sucks” with that girl. Years later someone had saved it and had wanted me to do the painting for them. So I did a slightly different version. Then people wanted different versions. Everyone can relate to it. That’s why. It’s one of those things.

1x: Was it one band in particular? Or was it just a general blasé for any band…
Niagara: How rare is it that you’re really entertained? I mean everybody can deal with that.

It was funny, on the original cover of Orbit, the background was dark and blurry, but it was actually just a picture of me and my band that Jerry decided to put on for a joke. It’s so him. I thought that was great. I probably have the cover somewhere I haven’t seen it for ages. But that’s funny huh?

1x: Did anybody ever say that about your band?
Niagara: We were always wildly entertaining.

1x: Let’s talk about the box set that we’ve got here…
Niagara: Oh God. I was just looking at it because I didn’t know. Colonel Galaxy put all that together. I think we’ve got a lot of things from different times. It has a nice mixture of stuff, we went to go visit Mike Kelley in Los Angeles (LA) and every time we would go and visit him when he found out that we were doing he’d always beg us to put the really early stuff, the early art noise stuff. I was always saying “Oh god. I dunno” but Colonel would sympathize with the whole thing, and thought it would be interesting. He put on some stuff that was really early.

The studio singles are on it, along with some extra things we recorded in the studio. “These Boots Are Made For Walkin'” was live. The second album has real early stuff too, and some of the Destroy All Monsters with Ronnie [Ron Asheton.] It’s got THQueen. That’s a good one. The last one is some later stuff. 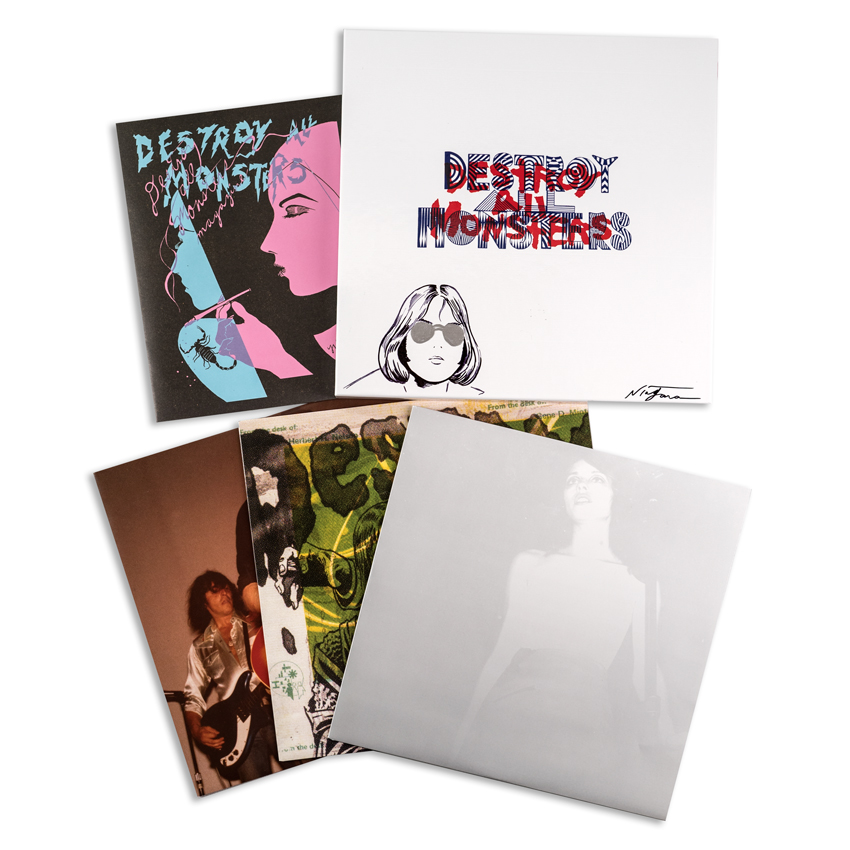 1x: For those who aren’t aware (check out our earlier interview here) what were the different incarnations of Destroy All Monsters?
Niagara: Early on it was a college throw together. That lasted about 5 minutes. We didn’t really play anywhere. We’d mostly do an outdoor thing. A few parties. We’d burst into parties and start playing. They’d either all leave, or they’d kick us out. Or try to. Just try to get us to stop. Just stop. It was really hard to get us to stop. It didn’t last that long.

When Ronnie came back from LA, after New Order broke up, we petitioned him to come jam with us in the basement.  We bribed him with beer!  He had a riot, and was sweet on me from the start.  After a couple practices he started coming up with some ideas.  He said, “We need a stronger bottom end…I heard Mike Davis (MC5) is getting released from prison….I’ll get him and maybe Rob King on drums.’’  We started sounding like…’’Wow…This Is  Wicked Sounding.’’ We started writing songs together like “You’re Gonna Die” “I’m Bored’’ and  “Nobody Knows.’’

When we first had the big opening with Ron playing, after practicing from him, I was the only one left from the “original” noise college thing. It was a big thing around the Detroit and Ann Arbor area. We were the talk of the whole thing. People were saying “something is happening here. Ron Asheton’s got some new project with this weird girl.” We always printed my pictures whenever. It was a pretty big deal and it was a pretty good opening in Ann Arbor at a big club. We had a good group of people that would follow us. We’d play with Pere Ubu. They’d open for us. It was a happening punk scene. Lester Bangs was at Creem Magazine then, and he was calling us all hours of the night, and churning out articles.  We were suddenly “Punk Darlings.’’

1x: What were some of the places you were playing?
Niagara: We started touring…Canada, New York, Philly, CBGB’s, Max’s Kansas City…then we toured England for a month. Unheard of then for a punk outfit from Detroit. Locally we were playing The Second Chance, that was really a big club. We’d play there every few months. We’d play some other smaller clubs in Ann Arbor. We’d play in Detroit at Bookies, I dunno every month or two. It was always super packed. Bookies was great. The people that were making the money, they were getting a decent amount of money. The more packed it was, the more we were getting less and less. Everyone in town at that time knew that they were taking the money. The people at the door, and the two people that ran the place were taking the money. It was a joke. They ripped off everybody they could. But that’s just the usual.

We were playing around. We’d go to New York and we’d play with The Ramones,  or they’d come here and they’d play with us. We were playing decent punk clubs. Some were nice. Some were big, some were crummy. We’d stay at hotels and our driver would fill up the car with empty beer cans and we’d be on our way. It was horrible driving, but it wasn’t that horrible when everything is horrible. You just make it funny, so everything is funny. You just learned that every stupid thing that happens is hysterical. The guys had such a great sense of humor. Guys in bands have to have a great sense of humor. You have to. People in bands have to develop a really great sense of humor really fast. So everything was kind of hysterical. 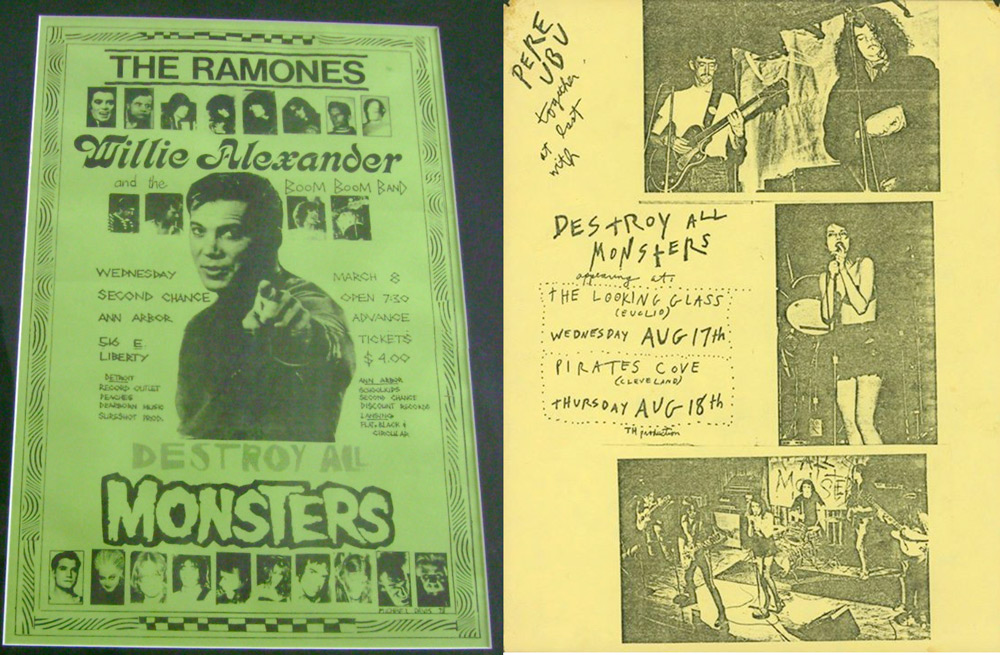 1x: Yea, sometimes that’s the only way to get through it.
Niagara: You’ve got to change your whole way of thinking as soon as you can. If you’re in a band or not. If you don’t think that everything horrible is hysterical you’re not going to make it.

1x: Let’s talk about some of your favorite bands growing up, who was the first band that you saw that really amazed you?
Niagara: When I was really little I went and saw The Monkees. I was proud of that. I thought of it not that long ago, thinking did that really happen? Did I really see The Monkees? But, I remember liking T. Rex, we got to see them. Back then the arenas were crazy. It was nothing like it is now. There was smoke everywhere. Everybody was smoking marijuana. You’d go in the girl’s room and girls were just OD’ing, passing out on the floor. Everybody had drugs. There was such a huge drug thing that was allowed to happen. It was just amazing, you can’t really think that it did happen.

I used to go see The Stooges. That was like the premier. I was huge into The Stooges. I thought that it was over the top fantastic. I was a devottee. It was just the best. When I got a chance to play with Ronnie, he was my favorite guitarist, and it was just fantastic. It took a long time for them to get appreciated. I remember just when they broke up I was going into record stores, and I was always trying to get extra Stoogse albums for my collection. I would ask these guys and people would just laugh at me! People that were maybe a little bit older than me, they just thought it was so funny. It took a long time for that to change, a really long time for that to change. I’ve always loved them. They were treated like shit, but there was a real tight knit group of people that knew that it was the best. When we’d play anywhere and met other bands, or went to see any punk bands, they all said that they got their musical lessons from listening to The Stooges and listening to Ronnie’s guitar. All of them. They all said the same thing. Because it was simple, but so provocative, that meant that they could proudly learn to play that way. So finally it all came to fruition. 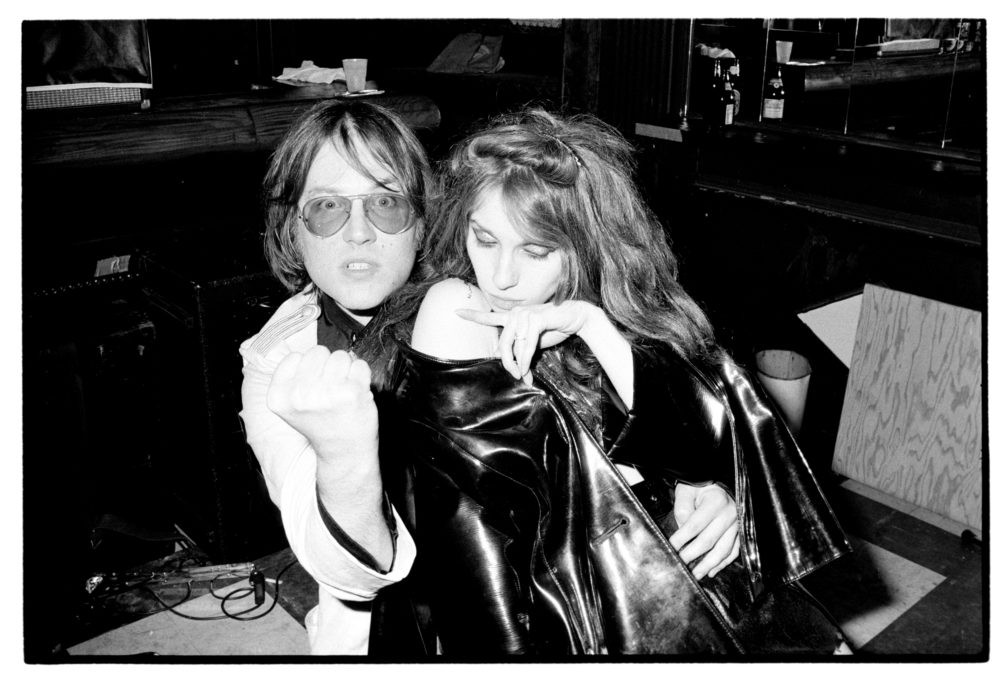 1x: Do you want to talk about any bands that do suck?
Niagara: No. Why waste the time? It’s funny, when I posted the image recently I got all of these people posting “That’s so me!” or they tag a friend, people really embody this lady. More so than the ladies that are killing people…

Niagara was interviewed from her studio in Hell, Michigan by 1xRUN Editor-In-Chief Pietro Truba. He has previously interviewed Leni & John Sinclair, Ricky Powell, Doze Green, Fred Armisen, Janette Beckman and Shepard Fairey among others for 1xRUN. Follow him @pietrotruba