We are excited to welcome in painter Josh Keyes as he joins us for two very special releases! First off we’ve got Keyes’ iconic “Float” which drops on July 20th, to coincide with the Apollo 11 moon landing way back in 1969. In classic space race storytelling “Frontier I” drops on October 4th to sync up with the anniversary launch of the Russian Sputnik satellite all the way back in 1944. With the drop of each interspatial release we will drop extremely limited quantities of matching two print sets. Be sure to set your calendars for these two. Read on for the full story behind Josh Keyes’ debut RUNs and be grab yours here on 1xRUN starting July 20th. . . 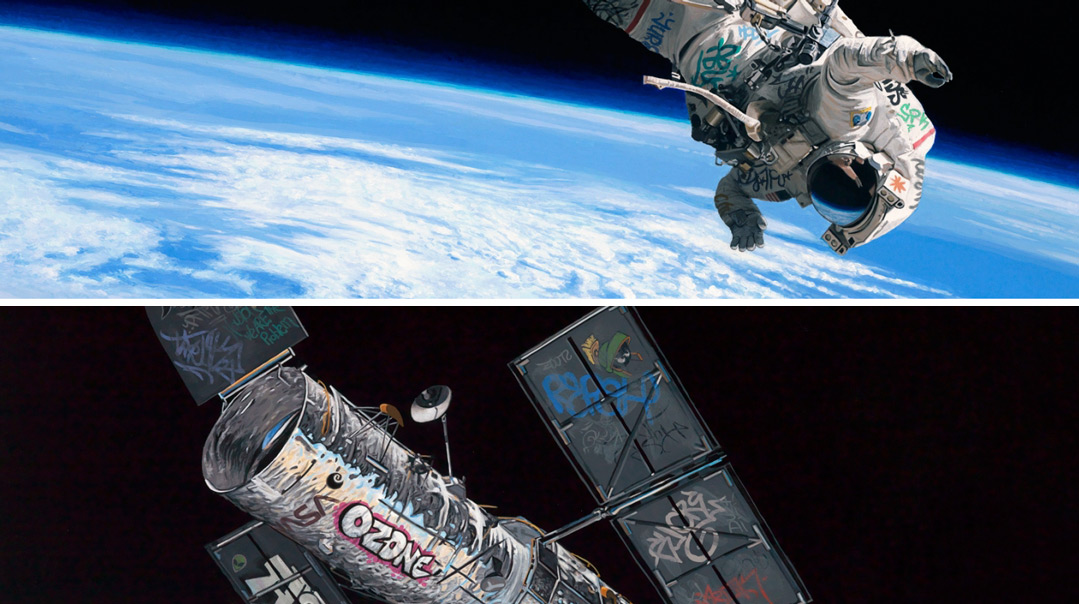 1xRUN: Tell us a little bit about each of these pieces, anything immediate you would like us to highlight about these two images?
Josh Keyes: I was stuck in indecision for a long time whether or not to make these paintings. The setting in space was so foreign to my previous work. I worked on some other paintings, but the idea of deep infinite space kept creeping through my thoughts. I guess the turning point was just to dive in and see what would happen. I was aware of Jeremy Geddes beautiful astronaut paintings, and wanted to find my own voice for working with this subject matter. I think they are successful in that I accomplished what I set out to express. I would enjoy revisiting this theme in the future.

1x: Were these two paintings part of a recent theme, series or show that you had? If so how did it fit into that given grouping?
Keyes: I try to work under a thematic umbrella for gallery shows, but I often have many different ideas that I tend to go with a mood for a show instead of just one topic or idea.

1x: What materials were used to create each original piece? When was each originally drawn and created?
Keyes: Golden acrylics were used to create both of these paintings, and they are painted on cradled birch panels. Frontier was created for Thinkspace Gallery’s 2015 exhibit at Scope Miami. Float was part of my 2017 solo show at Thinkspace Gallery.

1x: Tell us how the idea and execution came about for each image?
Keyes: I spent some time watching footage of NASA missions and looking up at the stars at night, just thinking what if, and maybe.

1x: How long did each painting take to create from start to finish?
Keyes: The conception of both paintings rattled inside my mind for a few months before the image gelled. It usually takes me about a week to two weeks to complete a painting. Float took a slight detour, after finishing the painting I felt that there was too much space at the top, I took a saw and trimmed it down.

1x: What is unique about these two pieces compared with your other work?
Keyes: I tend to work with post apocalyptic themes and imagery, this is my first time exploring this subject matter set in space.

1x: Why should people buy this one of these prints?
Keyes: They should buy it if they like it, I think the imagery is interesting and wacky, and when I look at the print, it transports me someplace far, far away. I like art that leaves me slightly confused and with unanswered questions. If you need another reason, the paper and printing quality are top notch.

1x: When did you first start making art?  What was your first piece?
Keyes: At age 5 or 6, I used to make little clay figurines and crude drawings of scenes from old sci fi movies. With help and encouragement from my folks I started working in a sketchbook and began painting. 47 years later and still on the same journey, only the scenery has changed. My first piece was probably a crude painting of a werewolf, and a homemade latex mask to go with it.

1x: What artists inspired you early on? What artists inspire you now?
Keyes: Before formal art education, it was the films and creatures of Ray Harryhausen. In art school I really gravitated to nearly every style and movement in art history. I nearly got kicked out of Yale grad school because I kept switching my style of painting every week. I love all forms of expression and I really wanted to see what it felt like to try them all. I settled on what I do now, realist painting always seemed so magical to me, and I love painting animals. As for now, it’s folks I follow on Instagram. I like a variety of art, everything from wood whittling to plein air painting, and ice sculpture, anything made with passion.

1x: Do you listen to music while you work? If so what? If not then what is your environment like when you work?
Keyes: 70’s rock and audio books, I am trying to get through Game of Thrones on audible.

1x: If you could collaborate with any living artist who would it be and why? Any deceased artists?
Keyes: Unfair question, too many awesome folks out there, but one that comes to mind, Scott Listfield . Love his sense of humor and I think his subject matter and style would jive well with my brand of insanity. [For the latter] Frida Kahlo, she knew how to get there and come back.

1x: What was the first piece of art that you bought? Do you still have it? The last?
Keyes: We have a beautiful Casey Jex Smith drawing from a show at the Hive Gallery in Oakland, I think it may have closed. It’s one of those images that continues to open it’s mystery like a nesting doll. The last piece was not so much bought, but we were gifted with a stunning piece by Craig Tapecat McCudden. Print wise, I was able to acquire Jeremy Geedes’ “Red Astronaut.” It’s a real gem. I also found a cool paint by number deer painting from a local thrift store. I am a sucker for paint by number art.