We welcome back Bay Area artist Eddie Colla, who returns with yet another unique offering Banglamphu. This time around, Colla has brought us a massive edition created on re-positionable matte fabric. Our first release of it’s kind we’re excited to showcase these new works that replicate the prolific street work Colla has been spreading throughout the world. Read on to find out more about Eddie Colla’s latest release and more. . . 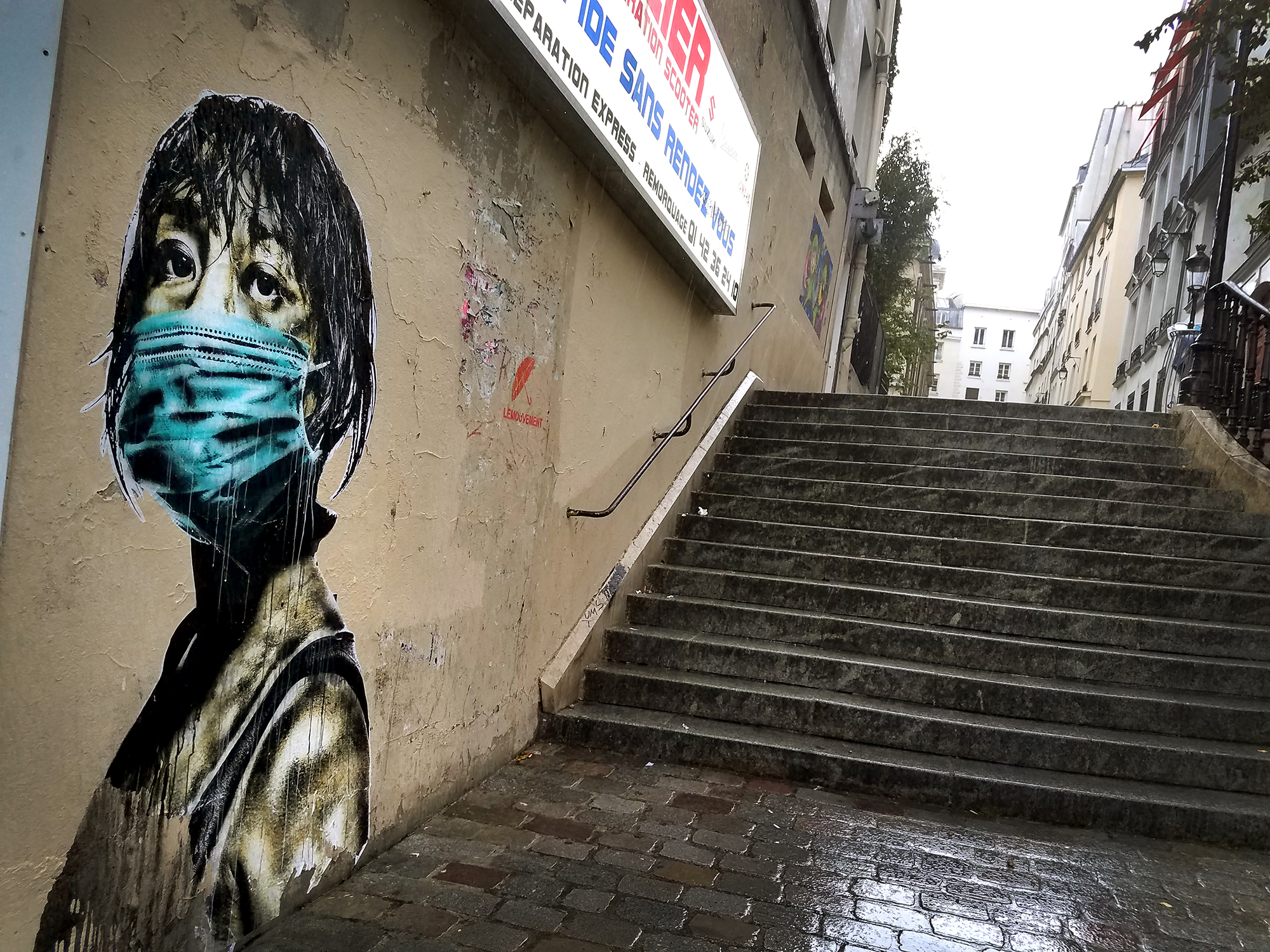 1xRUN: Tell us a little bit about this imagery used in this series, was there one original created or was it made specifically for this series?
Eddie Colla:  It was originally created as a street piece.  I’ve put this piece up in a number of locations including Paris, Houston, Nevada, Los Angeles.  I did make a gallery version of it in 2015. That’s often how I work though. I’ll put things up on the street and sit with them and later decide whether I’ll actually do a gallery piece.  The image and the title were inspired by traveling in Thailand with D Young V a couple years ago. The title “Banglamphu” is a neighborhood in Bangkok where we spent some time and did a lot of work.

1x: Was this piece part of a recent  theme, series or show that you had? If so how did it fit into that given grouping?
Colla:  It’s sort of a bridge piece. It falls in between 2 bodies of work, my Bike girl series and my series of Salvage portraits. This may be what appeals to me because I feel like it incorporates some of the best aspects of both series. 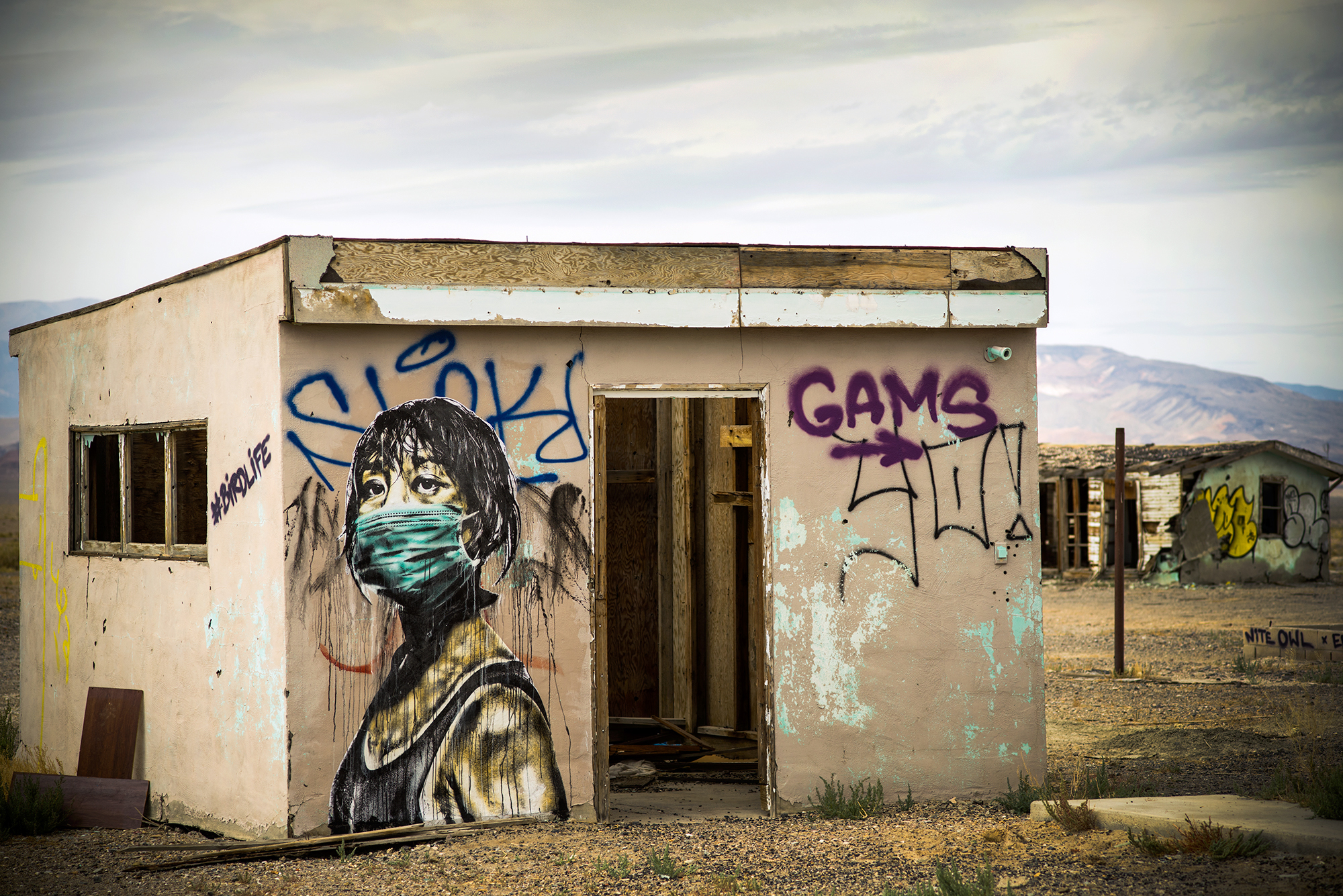 1x: What materials printed on and drawn with?
Colla: These pieces were created on self adhesive re-postionable matte fabric from Walls 360 in Las Vegas. They are painted on with acrylic and latex paints.

1x: This is a new kind of medium for you to explore right? tell us a little bit about the material used for this series.
Colla: These pieces were created on a self adhesive re-postionable matte fabric. For a long time I wanted to create pieces that were the same in  scale and process as the pieces I put on the street. The street pieces are created on paper and there is no effective way to present them  without installing them permanently. Also because the street pieces are usually cut as silhouettes framing them detracted from the way they are intended to be viewed. My friend John Doffing started a company in Las Vegas Called Walls 360. He called me one day and told me about this material they were using and asked if I wanted to experiment with it. It turned out to be exactly what I was looking for. It can be applied directly to a wall even walls that aren’t very smooth. It can be removed and rehung over 100 times without damaging the wall. It’s rip proof. Most of importantly the surface and the material allow for me to paint and embellish it exactly the way I do street pieces. It pretty much solved all the issues I was having with producing these types of pieces. 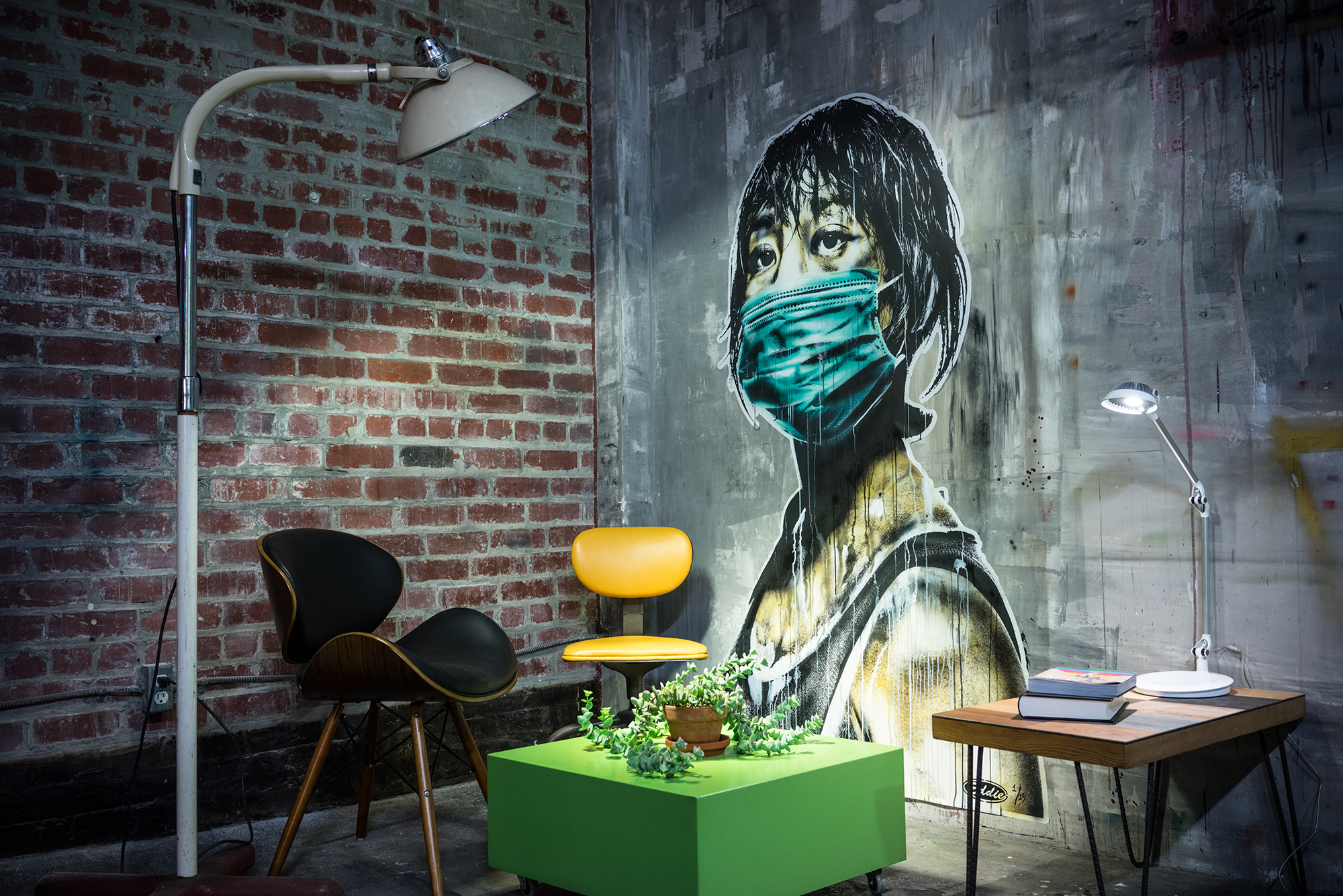 1x: When was the piece drawn and created?
Colla:  This is a piece I have revisited and put up on the street over the past 18 months or so. The pieces for this edition were created in December of this year.

1x: Anything immediate you would like us to highlight?
Colla:  Yes. I would like to highlight that this country just elected as racist, misogynistic, manchild to lead it.  As a result I’ll be taking up residency elsewhere. Send me a post card and let me know how that turned out.

1x: Tell us how the idea and execution came about?
Colla: I had a collector who wanted something that was more like the work I put up in the street. We went back and forth about how to do that in a way where it could be moved and or stored.  That’s when I started looking for a material I could do this with. 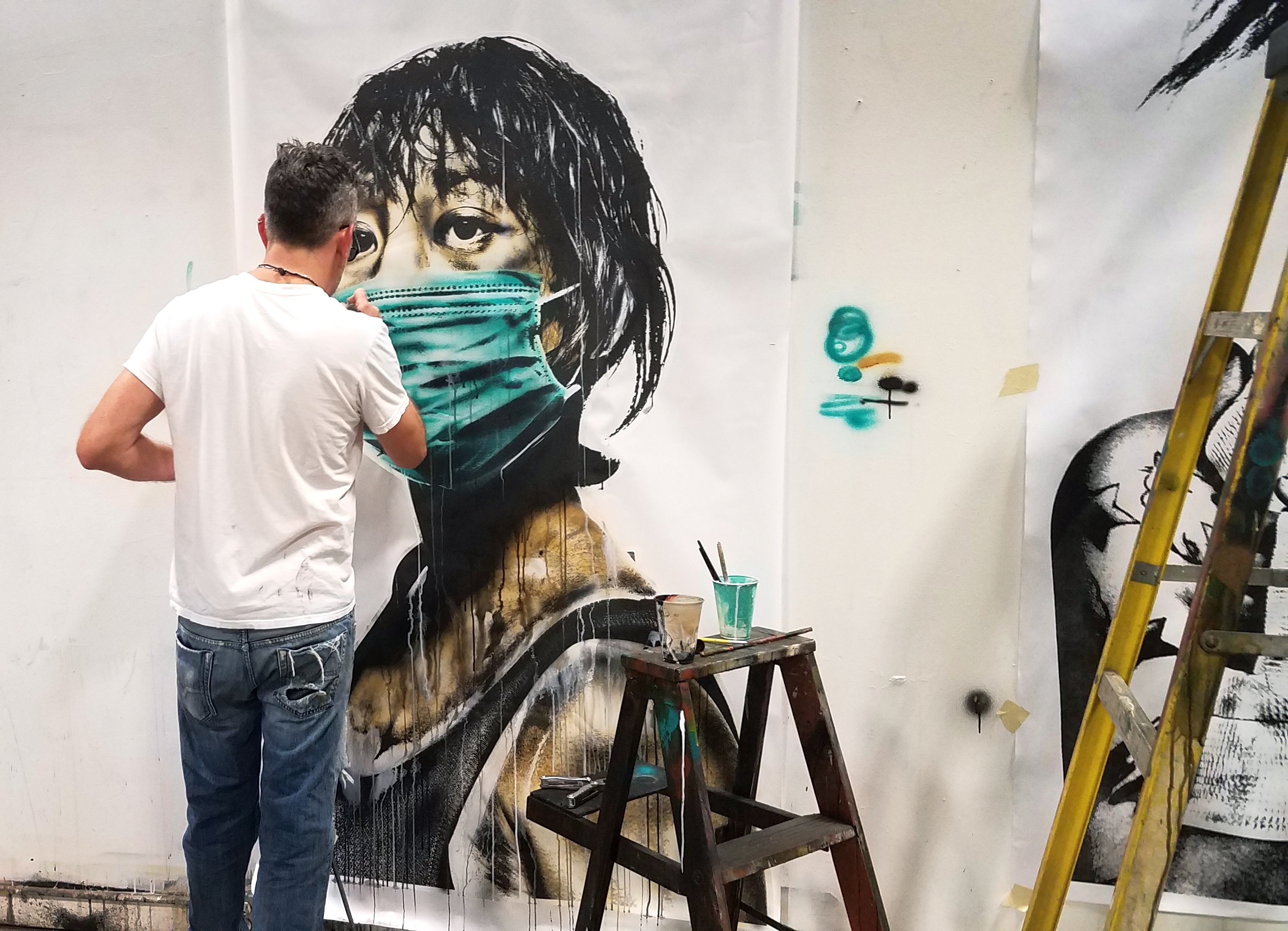 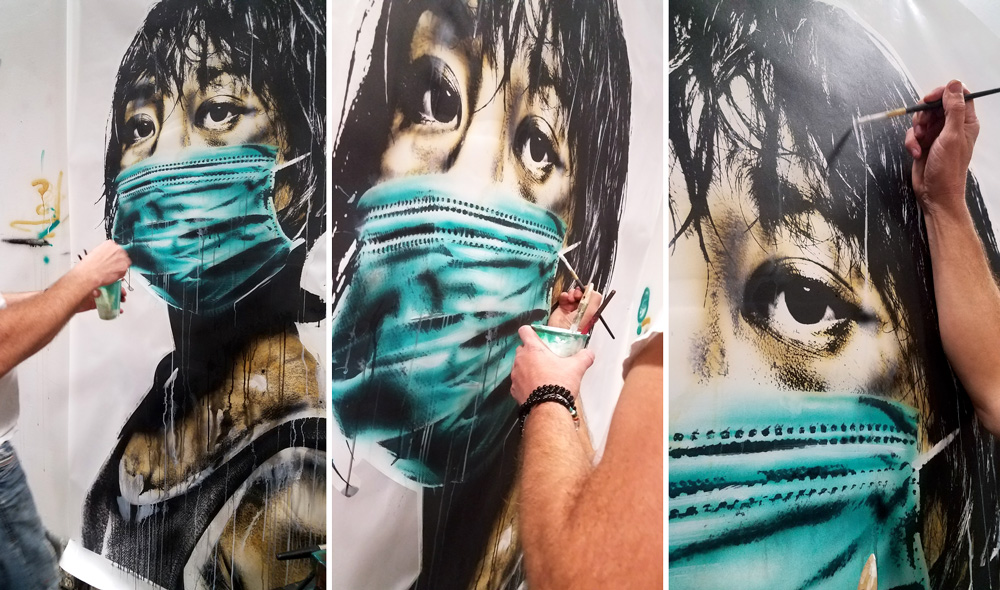 1x: How long did this piece take from start to finish?
Colla: These take about 3hours to hand paint after the initial print is made.

1x: What is unique about this piece?
Colla: It’s the first piece I’ve done on this material. It’s also the largest size I have ever done as an edition.

1x: Why should people buy one of these prints?
Colla: Because everyone who comes over will ask you about it. 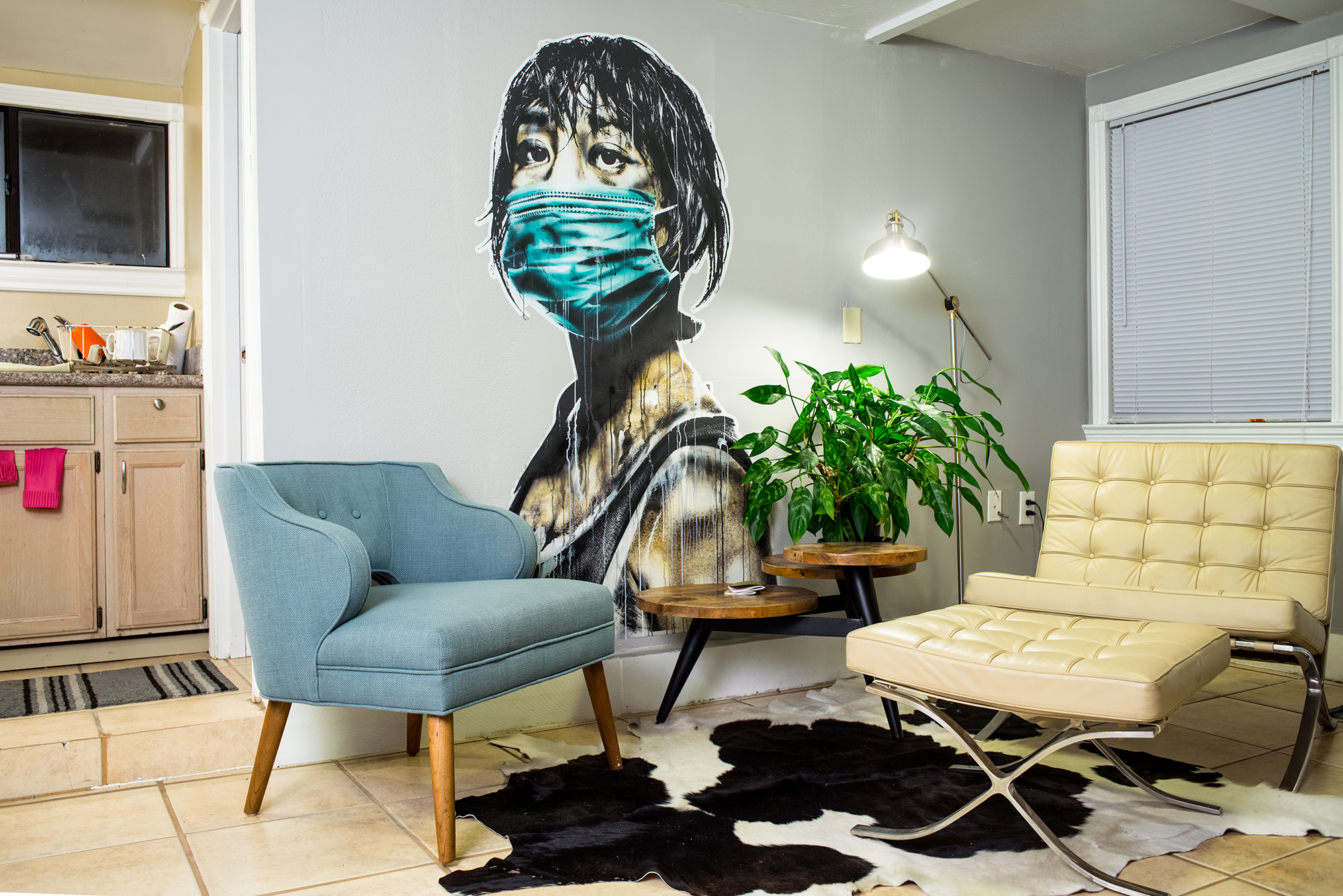 1x: 2016 is wrapping up as interesting to say the least, how did 2016 go for you personally and professionally?
Colla: Professionally, I had more opportunities and made more new relationships this year than in any previous year. I also think I let go of any residual preconceptions of how this was all suppose to play out. That is to say, I went back to imagining.

1x: What were some of the strides you feel you made in 2016?
Colla: I spent a lot of time in France and will probably end up there this year. It’s really where I would like to be. I made many friends over there and laid the ground work for that transition. I also did quite a few collaborations which is something I hadn’t done much of in the past.

1x: Were there any artists (new or old) that you were really digging this past year?
Colla: I did a bunch of work with Oakland artists James Swinson and Steve Javiel both of whom I’d admired for some time. I also share a studio with Brett Amory and he’s been really moving in different directions lately. That has been inspiring to watch.  While I was in Paris there were quite a few artists I was digging Noty and Aroz, Levalet, Philippe Herard and a photographer Melissa David just to name a few

1x: What are some of your goals for 2017?
Colla: Stay the fuck out of the United States.

1x: We’ve got an upcoming show with you in 2017, without giving too much away, what can fans and collector’s expect from (your first show?) in Detroit?
Colla: An experience more than an exhibit.

1x: Any other big events, shows, projects that you want to talk about?
Colla: I also have a solo show in Nice at GCA gallery in April of this year. It’ll be my first solo show in France.