California artist Aaron Nagel returns for his 12th RUN Solace which captures one of his largest works to date. Paying homage to one of his favorite paintings, Nagel uses a palette knife for the first time, beginning a fabric-centric series that would become the basis for his latest solo show Cover with New York City’s Lyons Weir Gallery. Read on to see process photos as Solace takes shape, as well as the story behind the latest piece from Aaron Nagel . . . 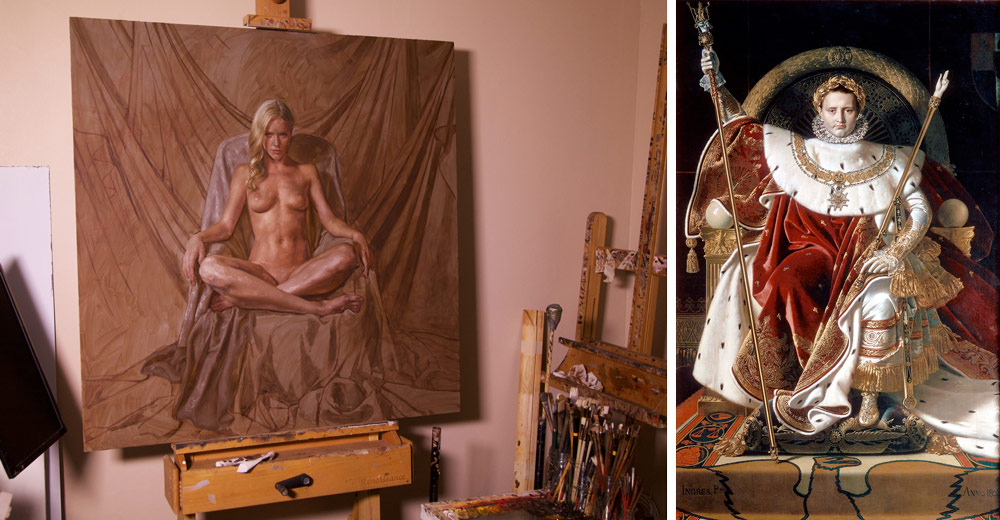 1xRUN: Tell us a little bit about this piece, anything immediate you would like us to highlight about this image?
Aaron Nagel: Two things. I absolutely love Ingrés portrait of Napoleon — it’s one of my favorite paintings. Every time I get a model in a chair with a regal vibe, I can’t help but think of the throne and the amazing presence that piece has. Added to that, the model just oozed royalty and confidence, so it was inevitable we came up with a shot like this.

1x: Was this image part of a recent theme, series or show that you had?
Nagel: This painting was done in between solo shows when I had some time to play around a bit. It was actually my first attempt at making fabric a large part of the composition and the first time I used a pallet knife for such a significant part of the piece (everything but the figure is entirely painted with pallet knife.) I went on to paint a bunch more fabric pieces and based my last solo show around the interaction between figure and fabric. This piece was very much an entry way into what I’m doing now.

1x: When was this piece created and what materials were used to create this original piece?
Nagel: This piece was created in the fall of 2015 using oil on ACM (Dibond) panel.

1x: Tell us how the idea and execution came about for this image?
Nagel: The image is very much the product of a very collaborative photo shoot with the model Elle. I had worked with her once before and while I got some good reference (and subsequent paintings) from our shoot, it was much more tentative — very much getting a feel for things. For this shoot she came in super fired up about the process and was really concerned with making a good image for me to paint. It was great. 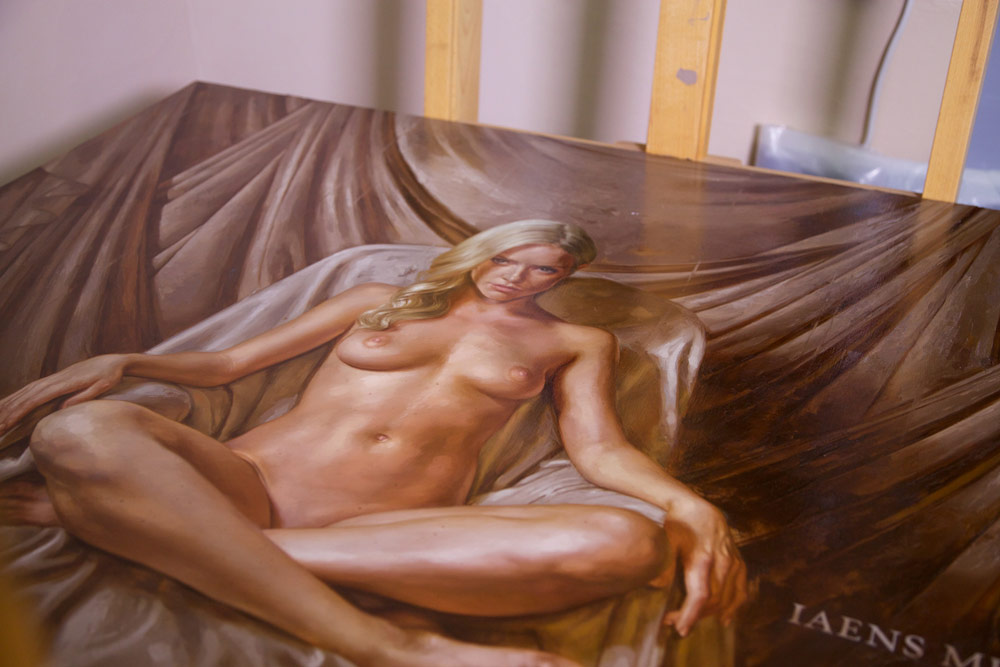 1x: How long did each of this image take to create from start to finish?
Nagel: I think it took about two months. I was painting lot looser then, so the figurative part of the piece went pretty quick. When I got to the fabric, it took a bit of experimenting until I figured out the pallet knife approach. I definitely spent a few nights working, only to scrape off the paint and start again.

1x: What is unique about this piece compared with your other work?
Nagel: To me, it actually stands out quite a bit among my other work. Aside from all the pallet knife textural stuff, it’s one of the bigger paintings I’ve worked on (I haven’t painted anywhere close to that big since.) It’s also very symmetrical and pretty monochromatic compared to my other work. Also, I don’t paint many blondes. This could actually be a rather long list. 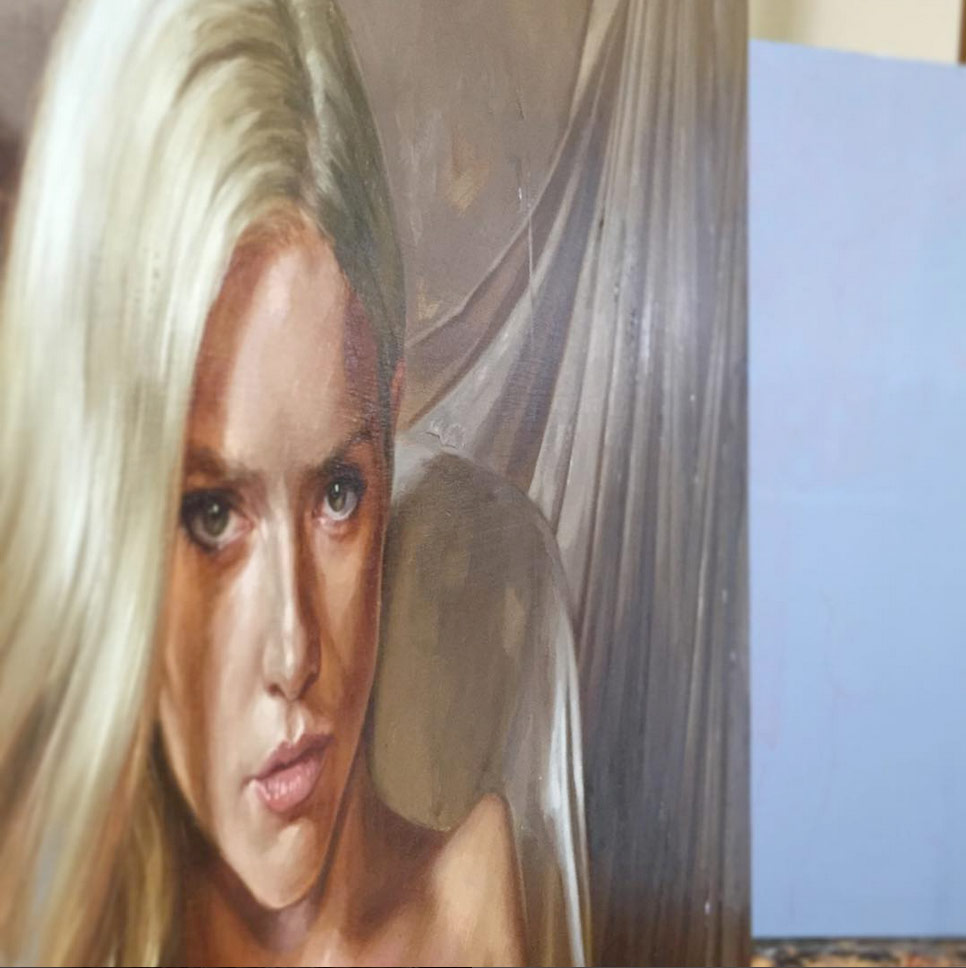 1x: Why should people buy this one of these prints?
Nagel: Ingrés’ portrait of Napoleon is much too expensive. 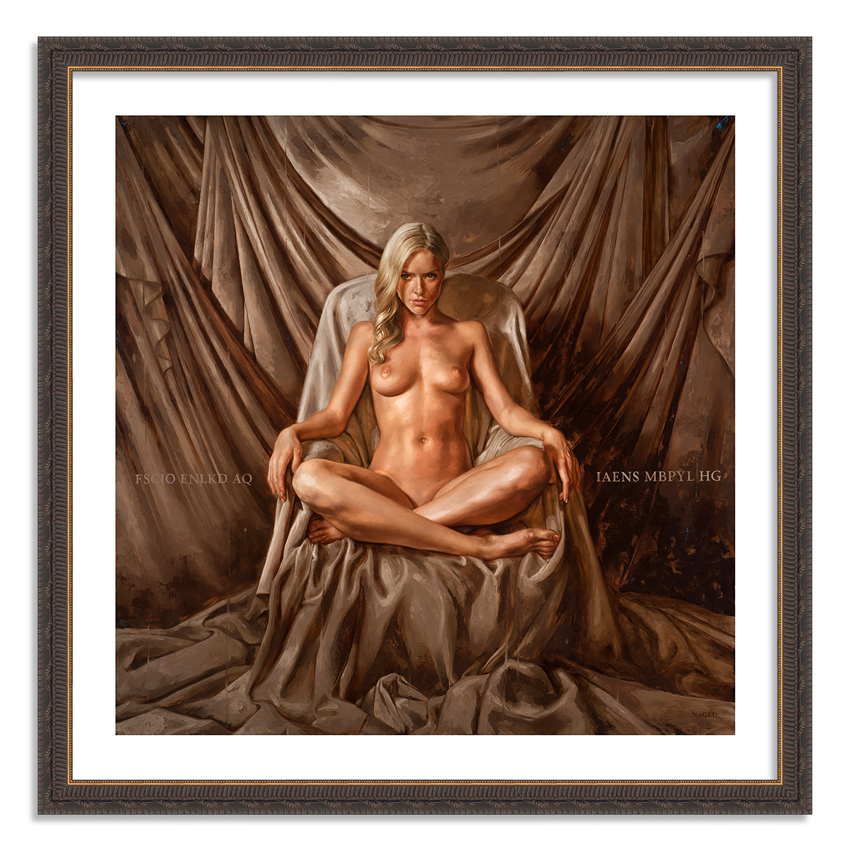 1x: What have you been up to over the last few months? Bring us up to speed on how things have been going recently for you?
Nagel: I’ve had kind of a rough few months. I spent the majority of last year painting for my solo show last January at Lyons Wier Gallery in NYC. The day the show was supposed to open there was a freak snowstorm so we had to postpone the opening to another day that turned out to be 8º. Shows are already really hard for me — it’s SO much time and work into something that you get to celebrate for 2 hrs. I’m usually pretty depressed around show time, but factor in the brutal weather and it was no fun at all. Then FedEx lost an entire crate of three of the largest pieces from the show on their way back from New York. After a month (of crippling anxiety) they were located in North Carolina and just arrived back in California — although they are not in the best of shape. I’m not getting to paint as much as I’d like to right now but I am happy with the piece I’m working on at the moment, so that’s good. 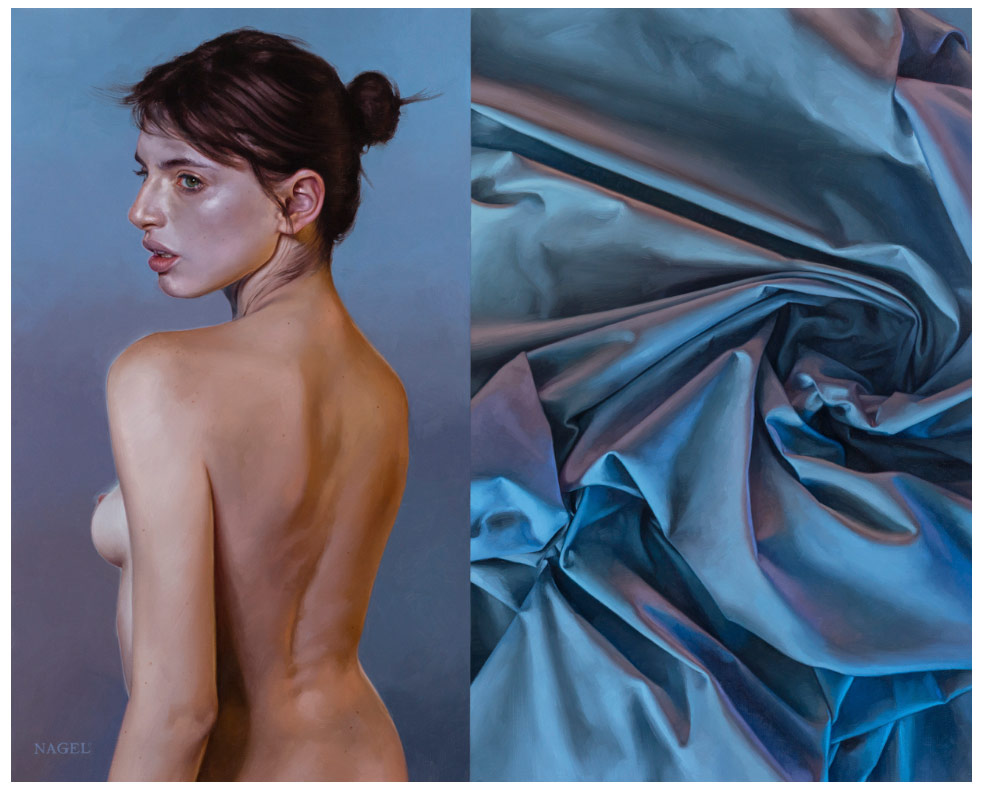 1x: What are some of the ways you have been trying to push yourself with your work over the last year?
Nagel: I’m trying to only concentrate on the work, which is harder than it sounds when you’re trying to do this for a living. show planning, social media, print stuff etc. all takes a ton of time (and I have 2 other jobs) — it’s easy to get into a situation where paintings need to be done by specific times which makes it hard not to rush in some capacity. So while I’m painting, I’m trying not to think about anything and just make what little chunk I’m working on as good as it can be. It’s slowed me down by probably a factor of 3, but I’m happier with the output. 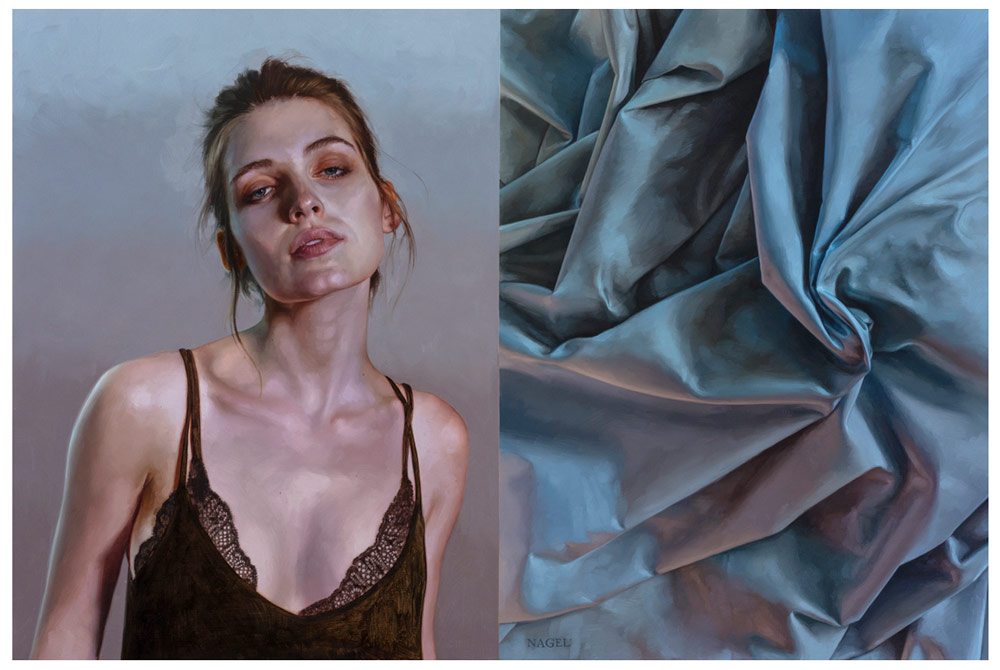 1x: What are some strides you feel you’ve made in your work recently?
Nagel: I think I’m painting to my strengths more and I’m making some progress with more interesting compositions.

1x: What was the last piece of art that you bought?
Nagel: I bought a water color from an artist named Mike Dorsey, I’m thrilled with it! 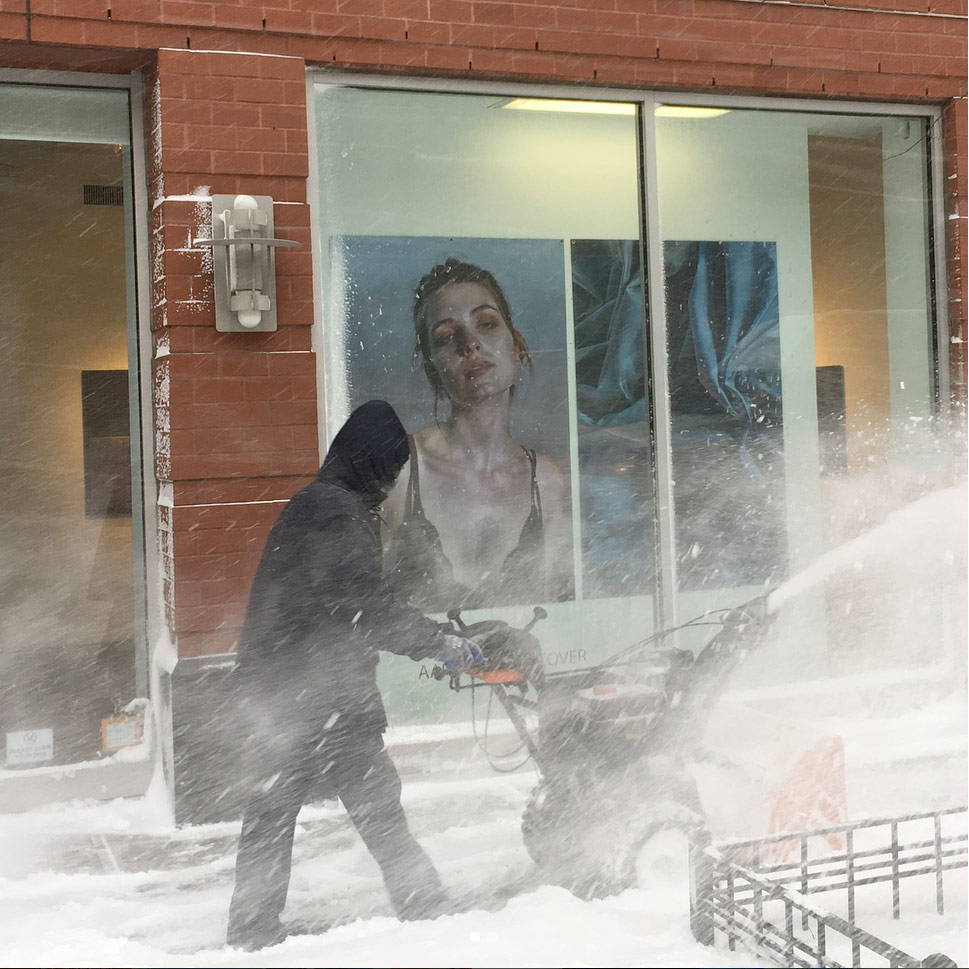 1x: Do you have any big shows or events coming up that you’d like to share?
Nagel: I have a show coming up at Abend Gallery in Denver this June with John Wenz, Eliza Ivanova, and Joseph Martinez.