To put it simply Estevan Oriol has influenced countless artists, photographers and creatives around the world with his iconic viewpoint and tireless work ethic. When you get a little more complex, Oriol has photographed musicians, models, athletes, movie stars and gangsters with equal attention to detail that has made him a go-to director and photographer around the world. For his debut RUN Oriol brings us Rascal In The ’47 Fleetline available in a fine art paper edition as well as a aluminum edition. Read on as Oriol gives us the lowdown on the image, his background and much more… 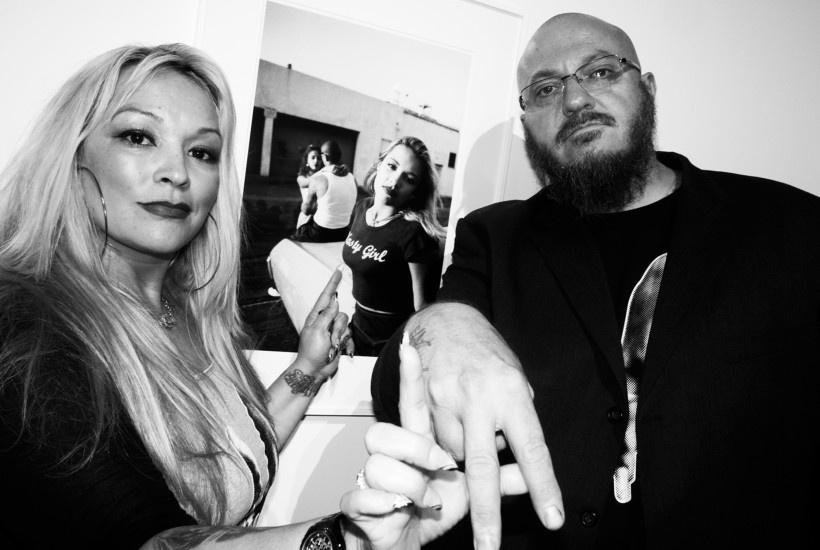 1x Thru Interview
Rascal In The ’47 Fleetwood by Estevan Oriol

1x: Tell us a little bit about this image, anything immediate you would like us to highlight about this photo?
Estevan Oriol: I met my friend Rascal at a wedding we were both attending some years ago, i thought he’d be cool to take photos of so i asked him, and this shot was from the first set of portraits we took, ever since then we’ve become good friends, at the moment he’s incarcerated finishing a 3 year term in state prison.

1x: Was this body of work part of a recent theme, series or show that you had?
Oriol: I recently had my best solo show ever at Milk Studios Los Angeles. My friend Willie, who is a partner at Milk, offered me a show that related to my latest book called L.A. Portraits (available on 1xRUN) published by Drago Publishing. The book contains a lot of my work from the past 20 + years of L.A. Street Culture (Gangsters, Lowriders, Women) and this shot of Rascal in my 1947 Chevy Fleetline was in the show as well as the flyer.

1x: What camera, film and development techniques were used to create this photo?
Oriol: I shot this one with my old faithful Canon AE1 with a 35mm lens. I used arista 400 asa film, which was developed and printed by Russel over here at Schullman Photo Lab. Russel printed in the darkroom on semi gloss archival silver paper. 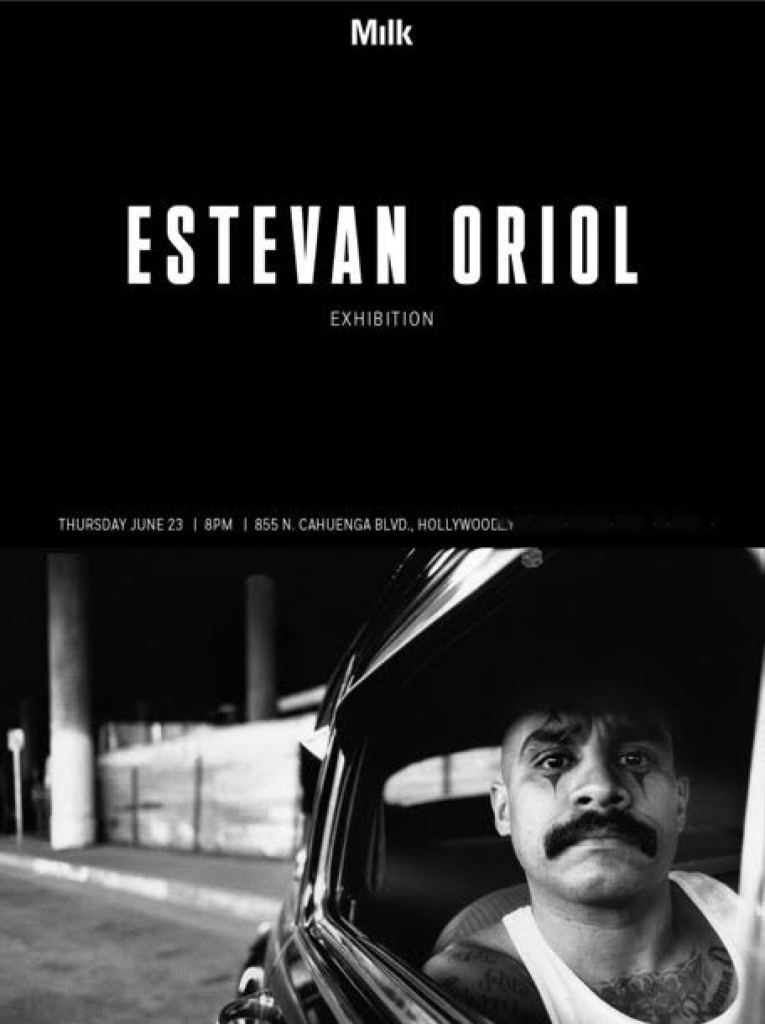 1x: When was this photo taken?
Oriol: That I’m not sure, I get lost with dates.

1x: Tell us how the idea and execution came about for this body of work at large and this photo specifically?
Oriol: When I first started taken photos I was really into lowriding, I had bought a 64 impala ss in 1989. By 1991 I was turning it into a lowrider thanks to my good homie Donnie Charles RIP.  Since then I’ve bought a few bikes and cars and moved them around to this date I still have my 64 impala and this 47 fleetline. Lowriding and gangsters kick it together, so here’s a lowrider kicking it with a gangster.

1x: Did much editing go into this photo or was it fairly straight out of the camera as is?
Oriol: All my street style photos have no editing, what you see is what you get. If it’s not a job or for a woman or celebrity I don’t like to edit them. 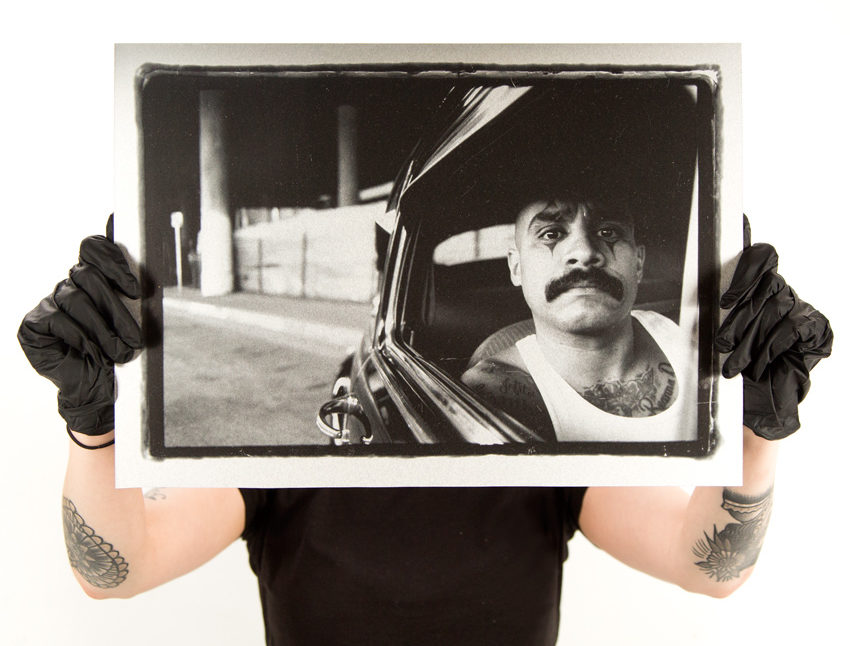 1x: What is unique about this photo compared with some of your other work?
Oriol: I just think it’s one of my favorite shots ever, the lighting, the car, the location, the framing, and Rascal’s look, it all goes good together.

1x: Why should people buy this one of these prints?
Oriol: To make a contribution to the Estevan Oriol Foundation of Photography, and it’s sick! 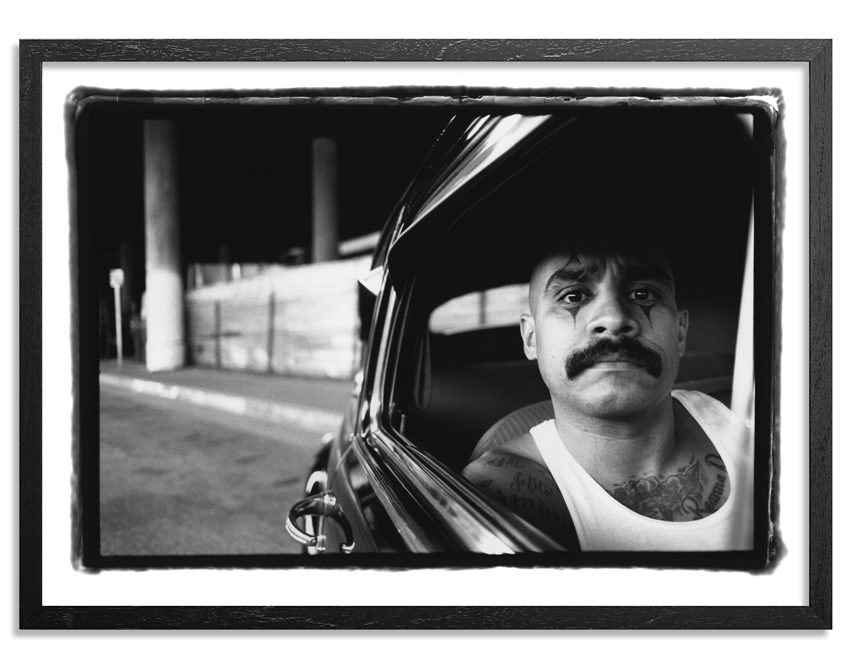 1x: When did you first start taking photos?
Oriol: In the early 1990’s I’m not sure the exact year.

1x: Do you remember the first photo you took? Either just in general, or for a paid job?
Oriol: Not exactly , when i see the photos it helps me remember those times.

1x: What artists inspired you early on? Who made you want to pick up a camera?
Oriol: My pops, Eriberto Oriol.

1x: What artists inspire you now?
Oriol: Hard workers, and the good ones. There’s too many that have made it already and that are gonna make it.

1x: Do you listen to music while you work? If so what? If not then what is your environment like when you work?
Oriol: Sometimes I’ll listen to music either hip hop or classic rock. If not while I’m shooting, then in between locations. I shoot in the streets so I’m always on the move.

1x: If you could collaborate with any living artist who would it be and why? Any deceased artists?
Oriol: My boy Mister Cartoon, we do it best together. Salvador Dali he looks nuts.

1x: What was the first piece of art that you bought? Do you still have it? The last piece?
Oriol: I’m not sure, like I said my memory isn’t so hot…all them days rollin’ with Cypress Hill! Now, I trade art now days with my favorite artists.

1x: Any big shows or events coming up that you’d like to share?
Oriol: Next year is the 25th anniversary me and Mr. Cartoon have been working and kicking it together , so we have a few surprises to be released next year. 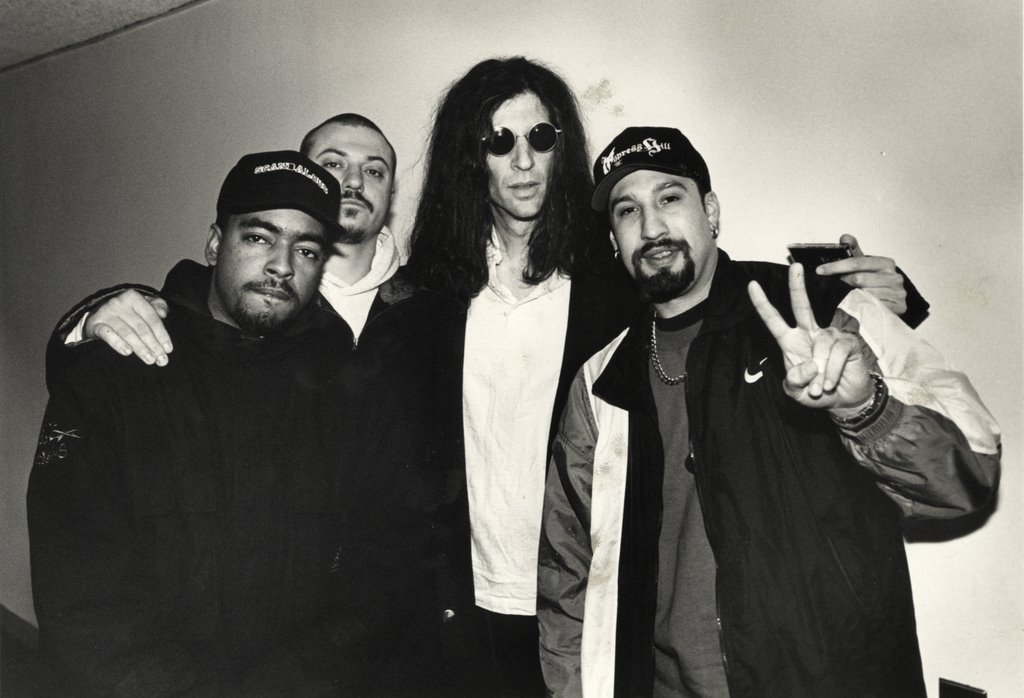