We are excited to welcome in photographer Janet Macoska with her debut RUN featuring none other than Queen’s charismatic Freddy Mercury, captured in the band’s 1977 tour. Available in two hand-pulled screen prints Bohemian Rhapsody captures Mercury at his best, live and on stage in front of a crowd. The Bohemian Rhapsody – Mono Edition showcases Mercury’s energy through stark silver and black, while the Bohemian Rhapsody – Stereo Edition bursts with color, inspired by Queen’s landmark Live Killers tour. Read on as we caught up with Janet Mascoska to discuss this classic Freddy Mercury image, her beginnings as a photographer and much more . . . 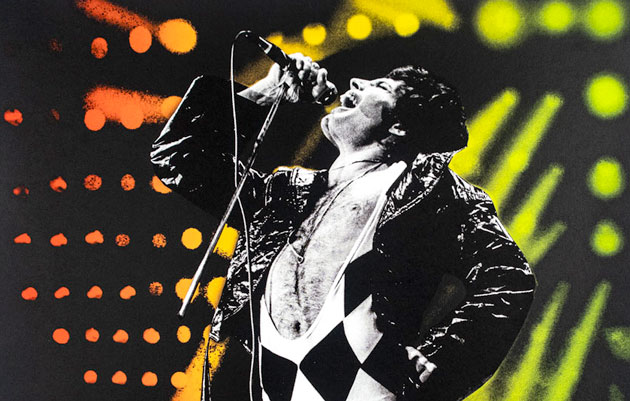 1xRUN: Tell us a little bit about this photo, anything immediate you would like us to highlight about this image?
Janet Macoska: This photo of Freddie Mercury was shot at the Richfield Coliseum, outside of Cleveland, Ohio, on November 27, 1977.  This was Queen’s tour in support of their album News Of The World.  This was the album that introduced iconic Queen songs “We Will Rock You” and “We Are The Champions.”

1x: Was this image part of a theme, series or show that you had at the time? If so how did it fit into that given grouping?
Macoska:  Well…the look of the photo is totally up to the personality and style of Freddie Mercury!  He chose the harlequin outfit, which he wore a lot on this tour, and the body posture, boldly arching his back and letting go with those immediately identifiable vocals…IT’S ALL FREDDIE!!!   I must say, as the photographer of this shot, and 45 years worth of rock and roll photography, that it is my job to know the music, know my subject, and understand and anticipate those moves.  Freddie was a blast to photograph because he didn’t hold back and had such an incredible physical presence onstage. 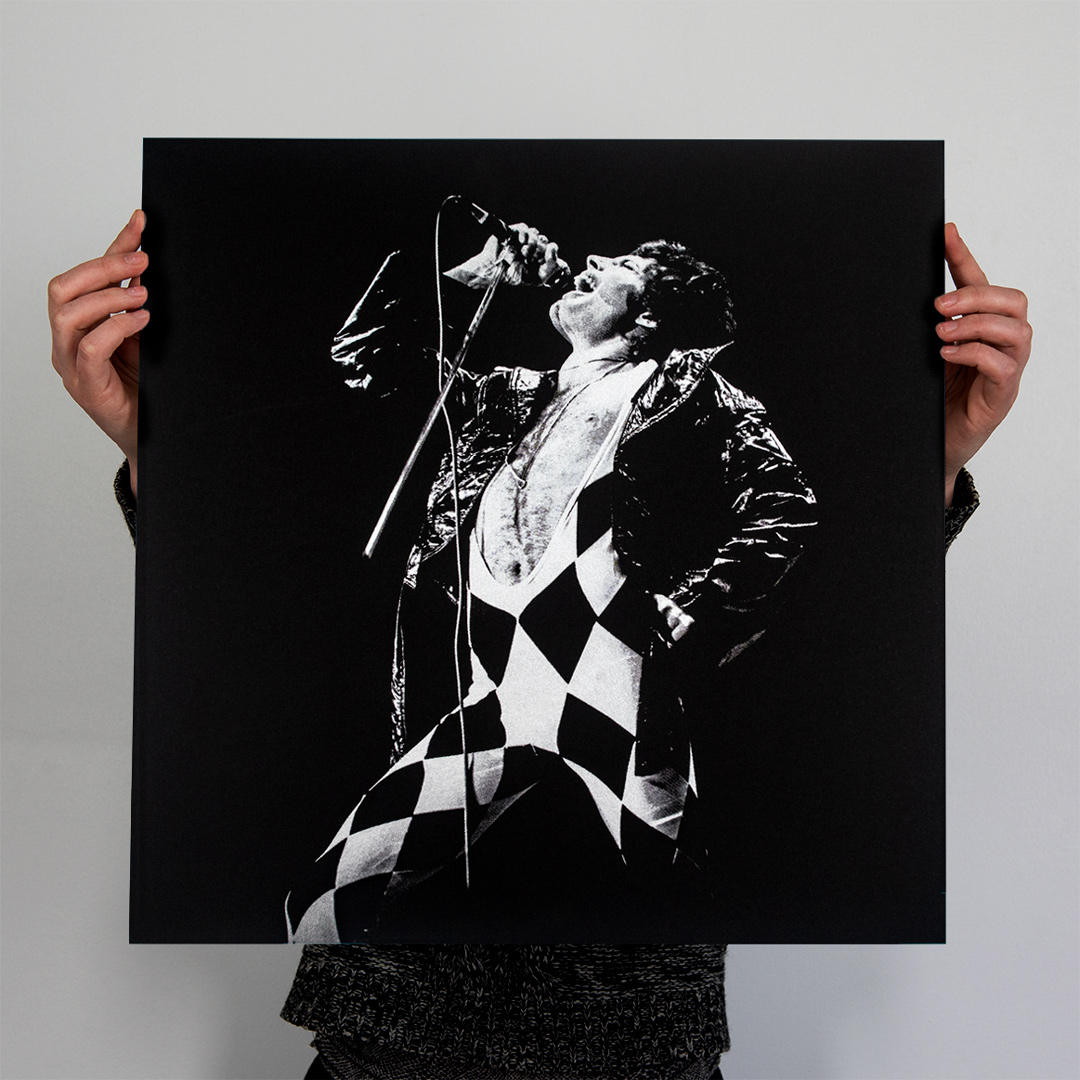 1x: What camera/ film/development were used when you shot this original photo?
Macoska: When I shot film, I used a Nikon FM, which was a manual camera.  The light meter inside was the only help I got, and many times I just used the meter as a reference point.  Concert photography, with spotlights and back lights, cannot be shot using light meter.  Light is coming from all directions, your subject is constantly moving, so you need to know proper settings from experience.  Generally, I knew I needed to shoot wide open (largest f stop) and try to keep the speed above 1/60th of a second.  Better yet…faster.  To stop frenetic rock and roll movement, you PUSH your film.  So, my Kodak Tri-X film with a speed of 400 ASA, would most likely get pushed to 1600 ASA.  That meant more development time and more grain; but you got the shot you wanted.

1x: When was it originally shot and created?  Tell us how the idea and execution came about for this image?
Macoska: This image was shot on November 27, 1978. There is no such thing as having an idea and executing it at a rock and roll show.  I’ve only done that, maybe 2-3 times.  The rock and roll Gods LAUGH at photographers who think they are in control!  You need to be receptive to what is given to you, whatever happens onstage.  Knowledgeable…and anticipate.  I get very quiet internally at all shows.  I don’t hear the music.  All my senses are tuned to the musician and the moment in order for me to capture that 60th of a second moment.  You are actually clicking the shutter before the moment happens (figure that one out!).  So I feel I’m somehow channeling everything the musicians are giving me into this visual documentation.  It’s very, very real.   Many of them have used my photos for their projects because they KNOW I totally get them. 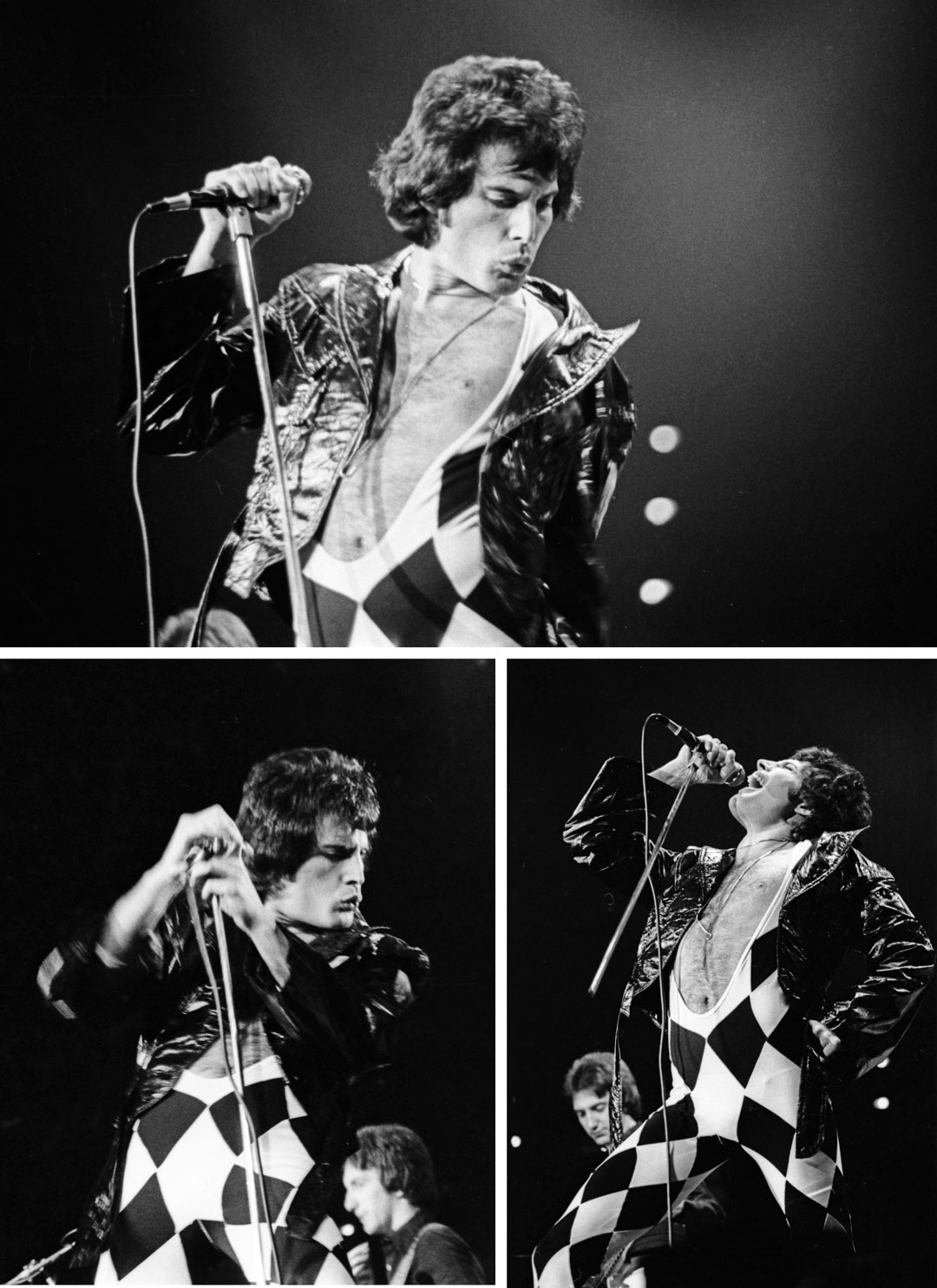 1x: How many other shots were taken during that show and was this image ultimately chosen for a publication/assignment?
Macoska:  Because film photography was actually SLOWER…..you waited for the image you wanted and your subject needed to be properly lit as well.   Since that is how we shot, I believe I only shot two rolls B&W film (72 photos; 36 per roll) and probably shot a partial roll of color slide film.  I edited my own film, so any photos that went out to publications were shots I felt strongly about.  At that time, I was working for a weekly entertainment newspaper called FOCUS, out of Columbus, Ohio and also freelancing to CREEM Magazine, a national rock publication out of Detroit.

1x: What is unique about this image compared with your other work?
Macoska:  That’s like asking which baby is your favorite.  It is unique because it is Freddie Mercury.  Queen were always one of my favorite bands.  I loved their music.  Their music was BIG and their stage presentation was BIG.  They were absolutely the best. 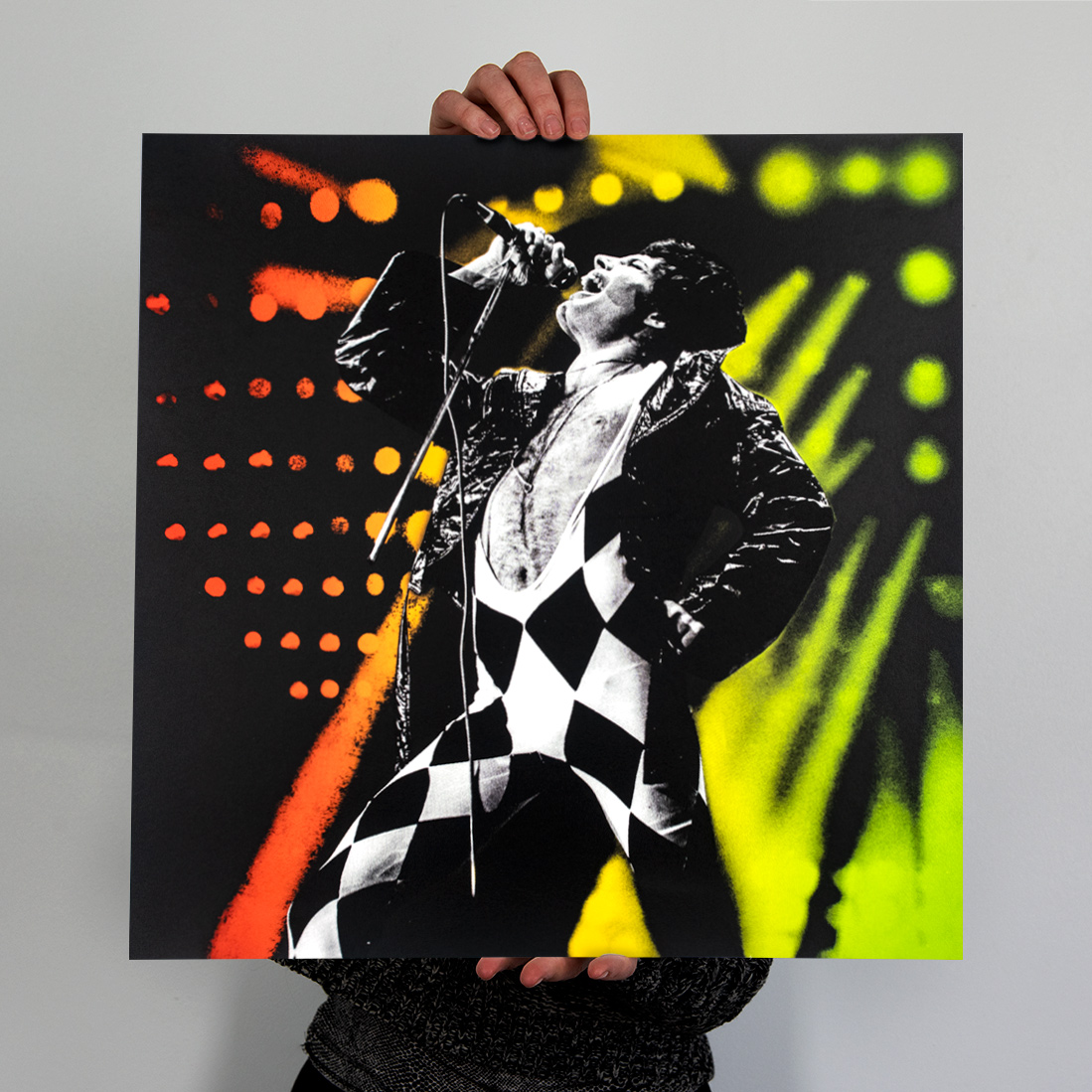 1x: Why should people buy this one of these prints?
Macoska:   Because it makes you smile!  Freddie Mercury is inspiring.  He is like the superhero of rock and roll.  I dare you, and Freddie dare’s you, to look away….you can’t. 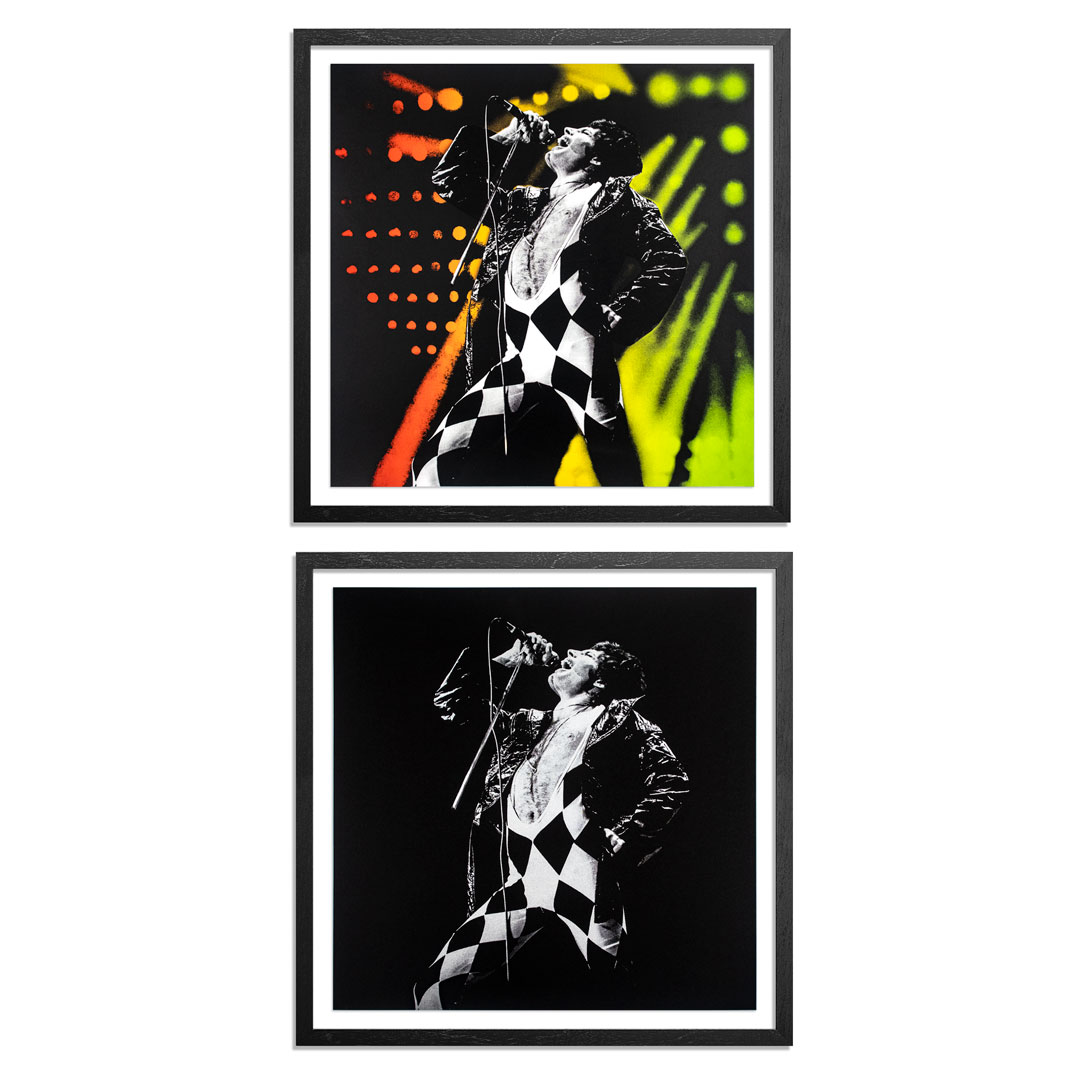 1x: When did you first start taking photos? What was your first photo where you realized you had created something special?
Macoska:  I started taking photos when I was 10 years old.  I started taking rock and roll photos when I was 12.  I started taking photos professionally…on my life path and career…in 1974, when I was 20 years old.  When I was 12 years old, I hung out at Cleveland’s Top 40 radio station, WKYC.  I ran a fan club for one of the disc jockeys, and helped the disc jockeys answer their fan mail.  They gave me records as payment (best deal ever!) and I got to take photos.  Rock stars would stop in to promote their record or their show when they were in town.  I shot some photos of Sonny and Cher, and submitted them to a national teen magazine.  It ran in the magazine, and I got paid $2.00!  Yes, you read that correctly.  I wasn’t gonna be rich, but I would always be doing what I love. 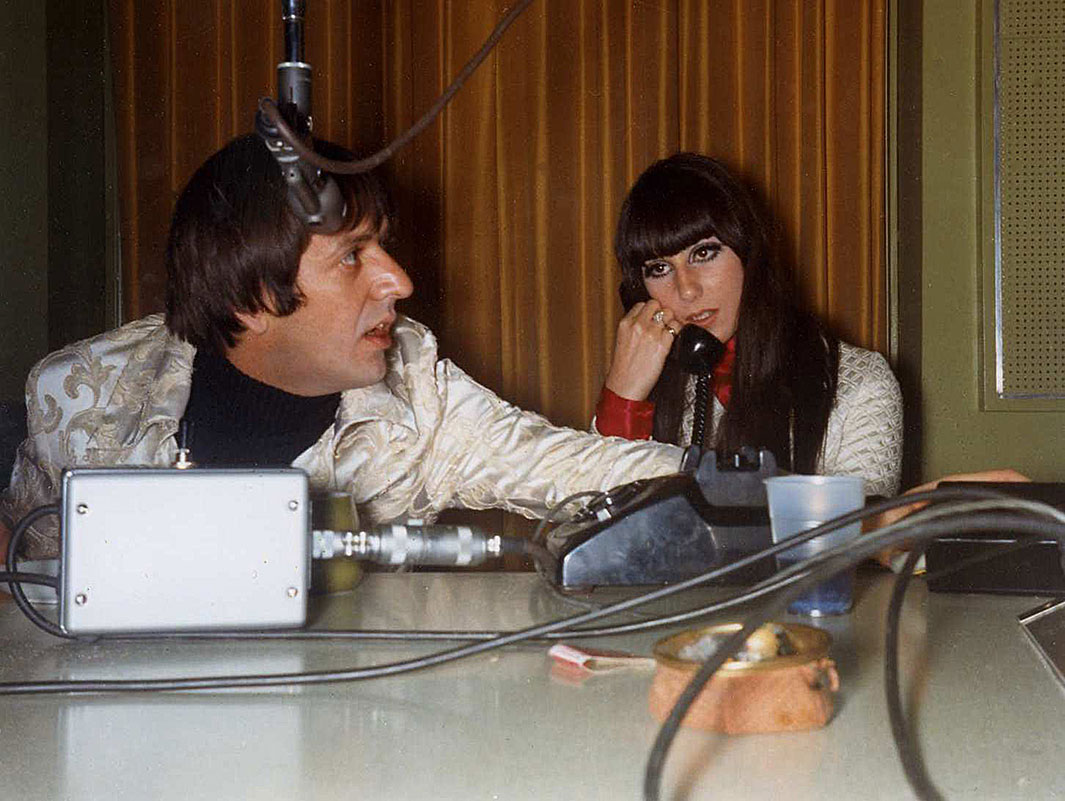 1x: What artists/photographers inspired you early on?  How about currently?
Macoska:  The Beatles coming to America when I was 10 years old is the reason I do what I do.  I had no musical ability, but I knew I wanted to tell the stories of those that do make the music.  My Mom subscribed to LIFE Magazine, and the photojournalists who worked for LIFE spent time with their subjects, showing who they are behind the scenes as well as who they are onstage.  I wanted to do that.

My favorite early photographer was Margaret Bourke White, who had the guts to do jobs that even men wouldn’t take on.  Early rock and roll photographers that I liked were Henry Diltz and Baron Wolman. I like Shepard Fairey’s work, especially his ability to be a force for change.  Photography, I feel, is in a critical point in its history.  I believe you don’t need a camera to take great photos, but my concern is that it’s LAZY photography to believe that selfies are the ultimate reason to snap a photo.  AND, do those photos ever jump out of a cellphone onto a print to be framed and adored.  Hardly. 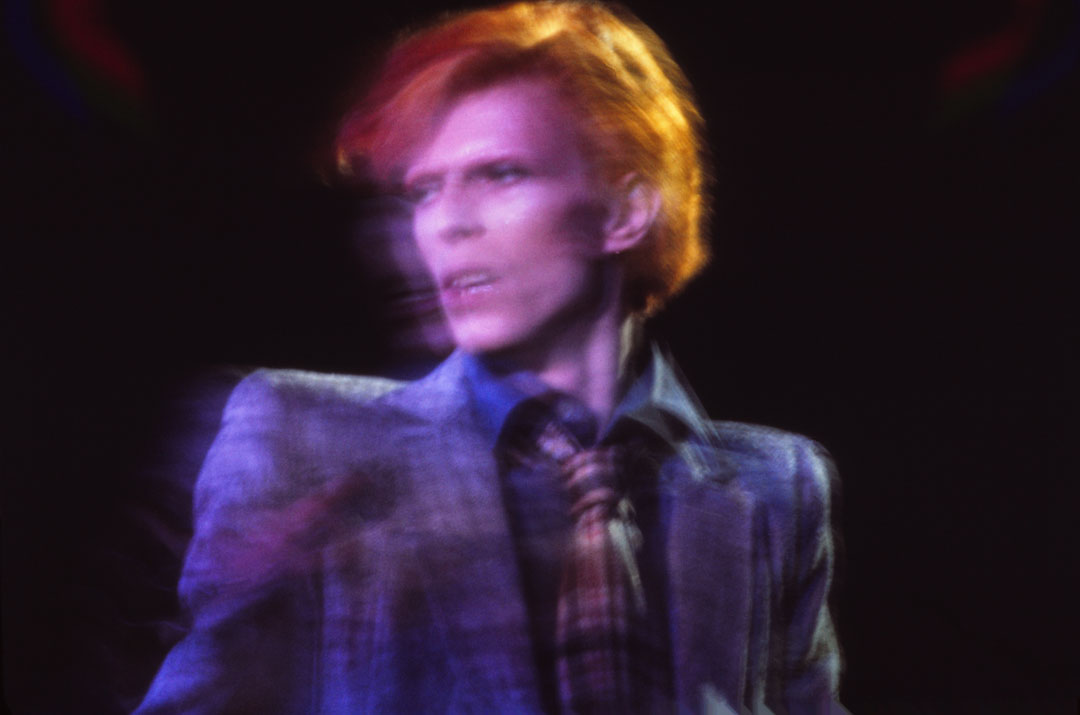 1x: Do you listen to music while you work? If so what? If not then what is your environment like when you work?
Macoska:  As a photographer who works in the music and performance business, I’m always listening to music, and THAT inspires me and gives me pleasure every single day of my life.  When I’m getting ready to photograph someone, I listen to their music.  When I’m editing my images, I listen to their music.  When I’m scanning older negatives, I’m listening to that artists’ music.

1x: If you could collaborate with any living artist who would it be and why? Any deceased artists?
Macoska: I would like to see what Shepard Fairey would do with some of my iconic photos.  He shares a love of bands like The Clash and Joan Jett and Blondie…as I do.  In terms of musicians, I would just like to work with someone who gave me free reign to let me be my creative self.  Right now, photographers are limited to shooting the first three songs of a show…and there are even more severe restrictions.  I’ve learned to get great shots in that amount of time; but its ridiculous to work that way.  What if the band only got to play three songs for their audience.  You’d have a revolution!  [For the later] it would be a toss up between David Bowie and John Lennon.  I love them both so much.  I believe that both worked with photographers as a collaborative effort.  That is real creativity.  Not a controlled studio setting for example. 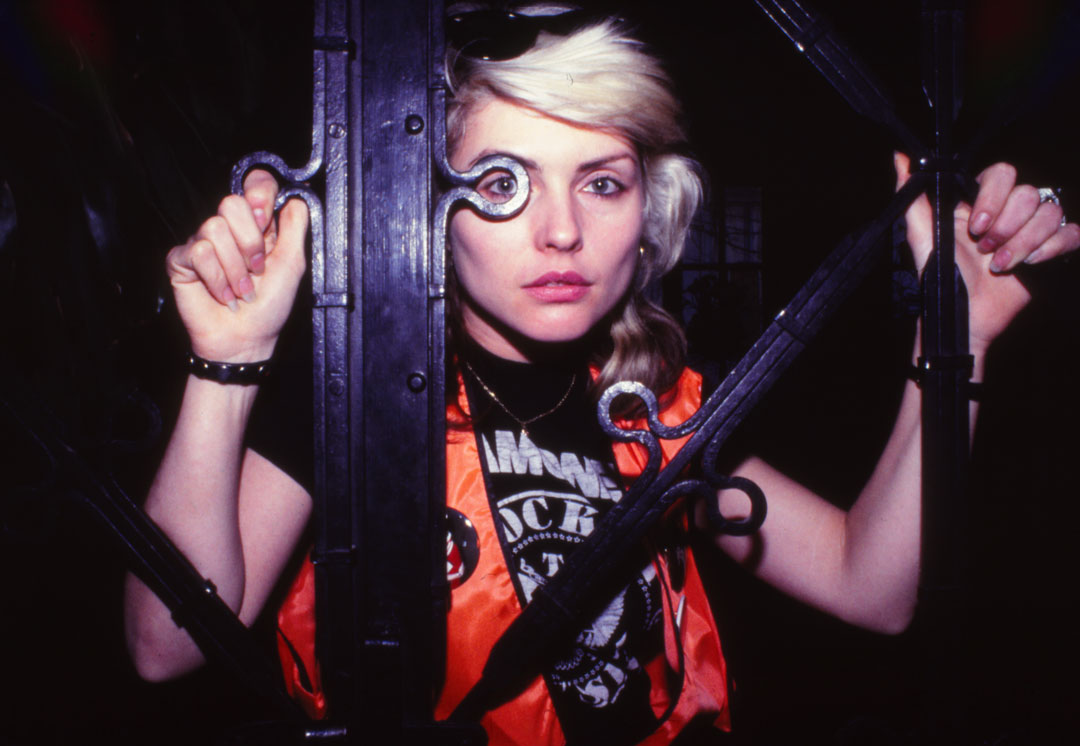 1x: Any big shows or events coming up that you’d like to share?
Macoska: I’m working on a second book, which will generate some big shows and events. 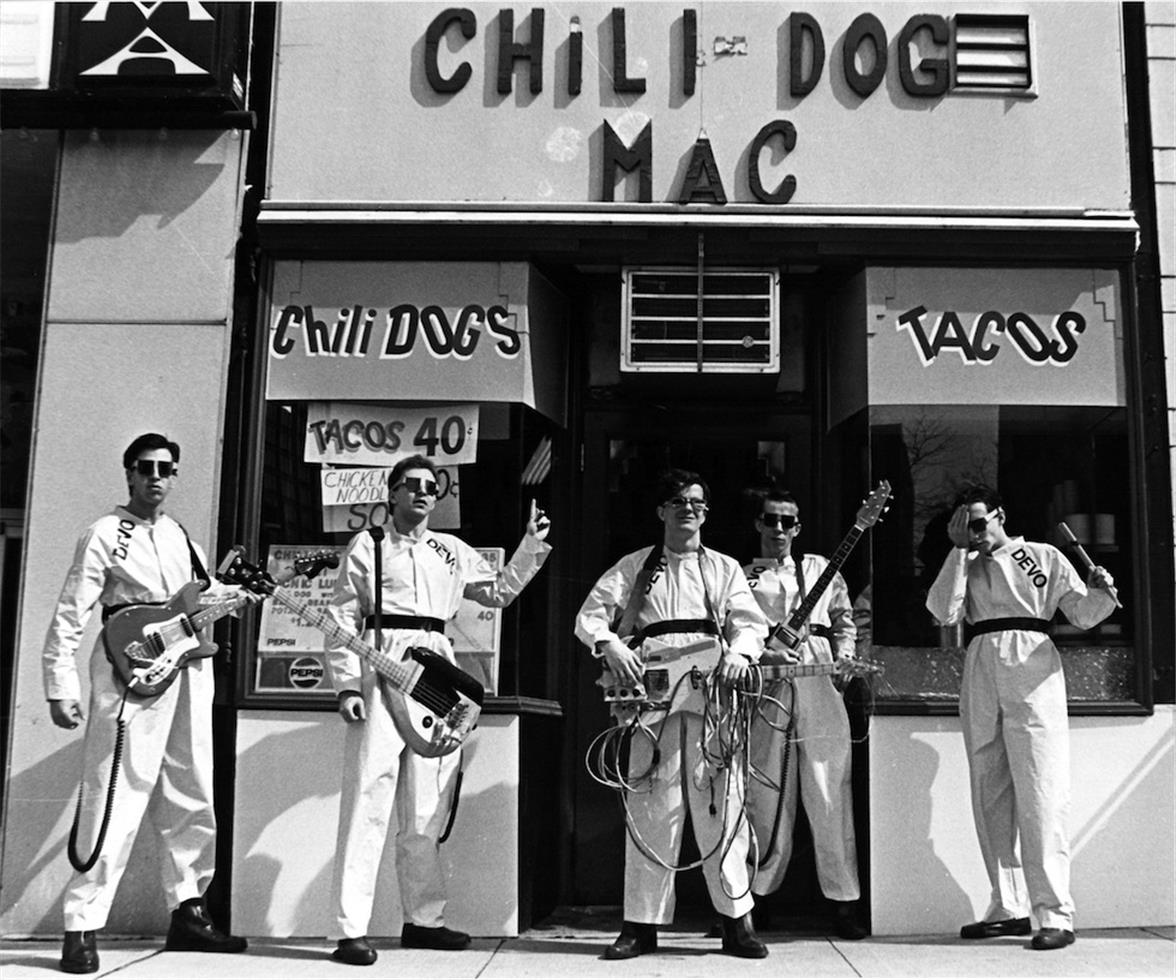 Devo At The Chili Dog Mac, 1978 by Janet Macoska