We are excited to welcome in legendary artist Stanley “Mouse” Miller as part of the Bicycle Day Print Suite. This year Mouse brings us One More Saturday Night Kid, a blend of two of his most iconic images. Born in California but raised in Detroit, Mouse would begin his art career airbrushing eye popping hot rod art at car shows. Like many looking to explore in the 60s, it wasn’t long before Mouse picked up and left for San Francisco. It was there where he would meet his partner in crime Alton Kelley. Forming the Family Dog, the two would essentially create and revolutionize the modern gig poster, while helping to create the visual identity for the Summer of Love. Read on as Stanley Mouse gives us the story behind his Saturday Night and Ice Cream Kid images and the newly created blotter edition created exclusively for 1xRUN. . .

1xRUN: Tell us a bit about One More Saturday Night Kid, essentially this is a blend of two of your iconic images, featured on the Grateful Dead’s landmark Europe album, and then your One More Saturday Night imagery. Let’s start with talking about the Ice Cream Kid.
Stanley “Mouse” Miller: That was 1972. This was when there weren’t any art directors for the Grateful Dead. If I tried to do that now they would say ‘are you crazy?’ It was originally an airbrush painting.

1x: How did the concept come about?
Mouse:  They gave us the titles, and the titles actually never came out on the album, the front was ‘Over There” and the back was ‘Stepping Out’ which we titled “Rainbow Foot.” They canned the titles on the final covers. So I did a painting of the front and back cover originally, a small painting, then Kelley and I did a big painting in airbrush of each of them.

Europe ’72 front and back cover by Stanley Mouse & Alton Kelley

The image started out because of a joke, and it was a spastic joke, which is not really politically correct, but there were spastic jokes going around in the 50s. If you gave Johnny a quarter and he could put the quarter on his forehead, then you give him an ice cream cone. Then he took the ice cream and put it on his forehead. So it was a bit of running joke with me and Alton Kelley. We were at a Halloween party in costumes and we got really stoned and we both simultaneously did that to our foreheads. It kinda just meant this was really crazy.

1x: How long had you been working with the Grateful Dead at this point?
Mouse: We did their first album cover in 1967 or 1968. We were doing posters for the Avalon Ballroom and at the time they were just one of the bands. They liked what we did for them and asked us to do the album cover, then we did a bunch of album covers for them after that. 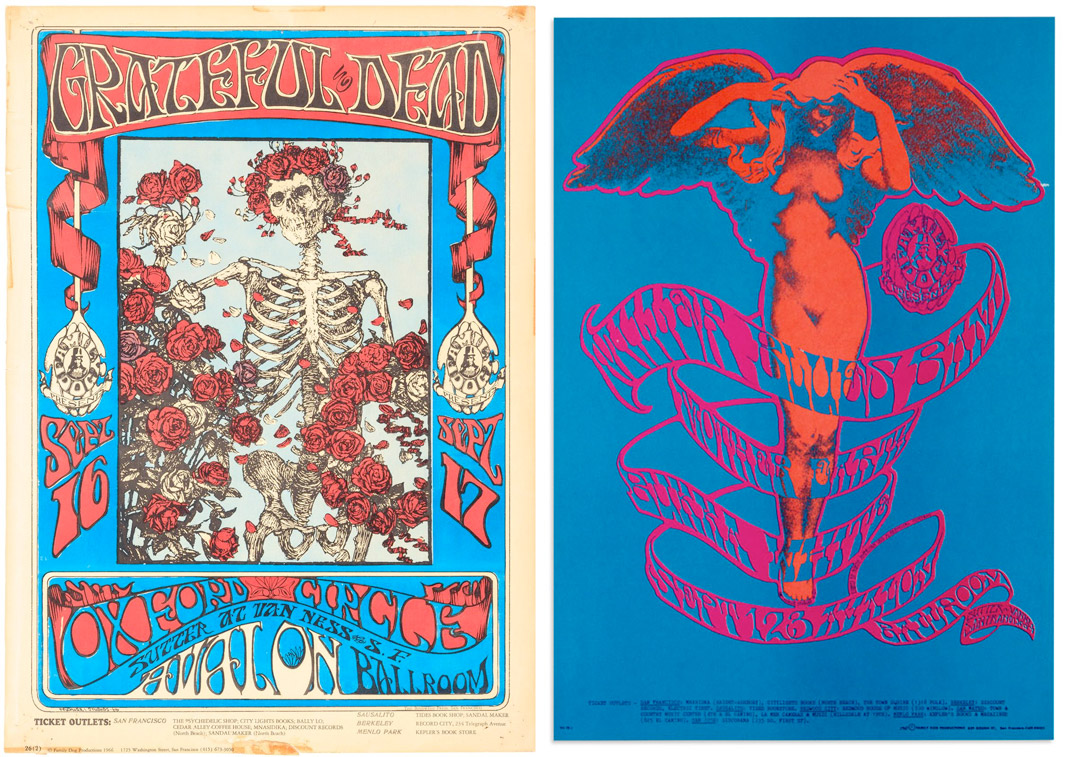 1x: So Alton Kelley wasn’t from Detroit, where did you two end up meeting?
Mouse: I drove to San Francisco in my ’65 Porsche. I was making a lot of money there making hot rod t shirts at car shows, but I was getting tired of doing that. I thought there was something more that I could do. When I got out there I think I broke an axle and I heard Kelley was a mechanic, but he was a motorcycle mechanic and I asked him if he could try to fix it.  He didn’t fix it, but we became really good friends. We had a lot of similar interests.

1x: Let’s talk about the other half of this image ‘One More Saturday Night.’ Was that you and Alton Kelley again or just you?
Mouse:  That was for a book cover that was made in 1981, I believe. That was just me.  It wasn’t a book by the Grateful Dead, it was a writer who put out the book on his own, and he asked me to do the cover. I think that pretty much was all done with brush. There might have been some air brush in it but I’m not sure. 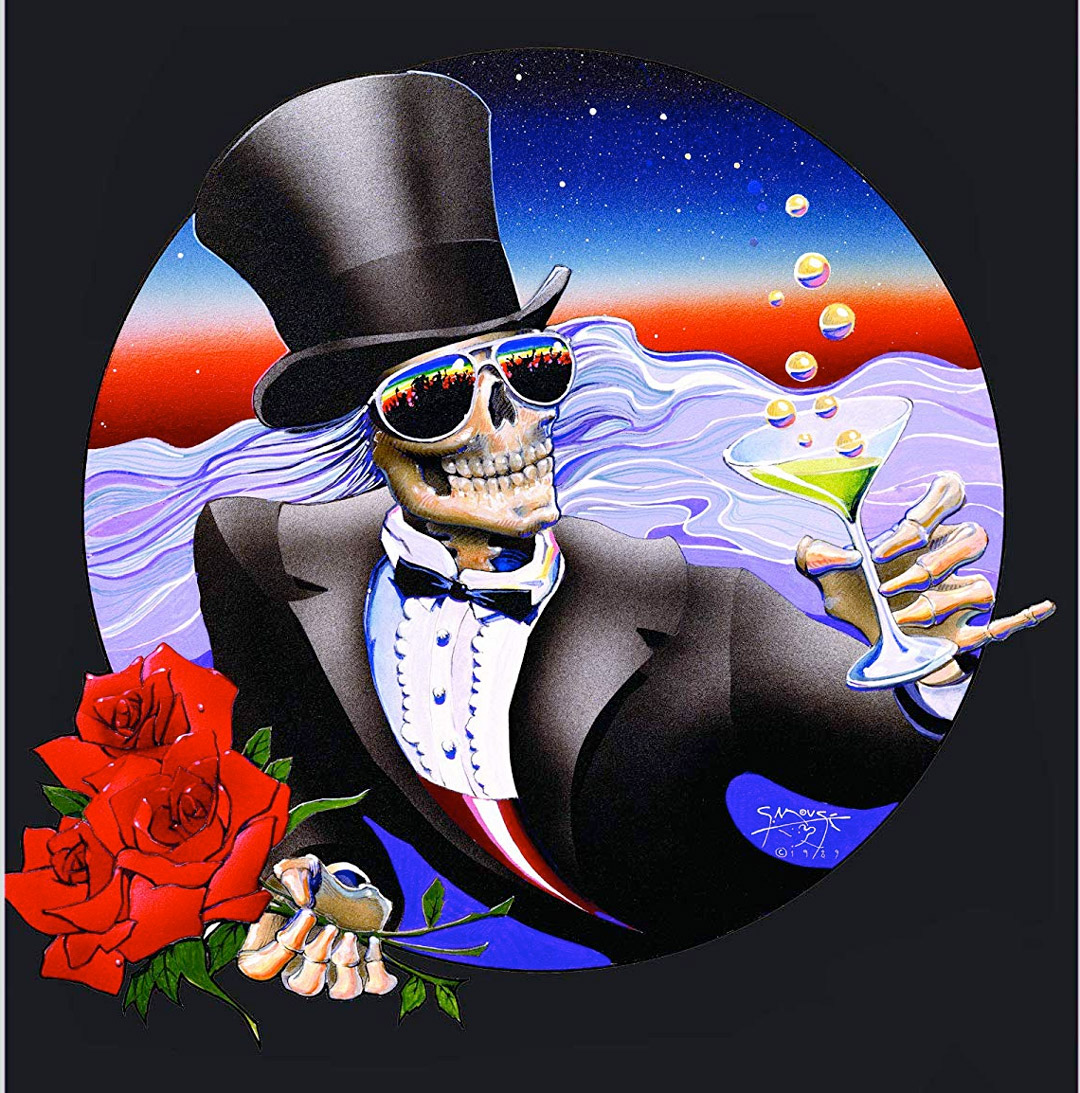 1x: What was unique about that image compared with some of the other visual vocabulary that you had developed for the Dead over the years?
Mouse: Every New Year’s Eve they would do a show and I would do some kind of image that was similar to this, a skeleton with a glass of champagne. We did some t-shirts and stuff, but this image was the culmination of all of those New Year’s Eve images.

I remember when the book came out I was in Paris and running around putting up posters of the book cover. We put it in a restaurant when the waiters walked away, we stuck it on the window and ran away. Then the waiter was chasing us down the street, and when he finally caught us he said, ‘Do you have any more of those posters?’

1x: I know we had talked about these two images specifically, but how did the idea come about to combine these two images.
Mouse:  They released more music from that tour, so they put that a Europe ’72 Vol. II and this was one of the ideas that was left over. 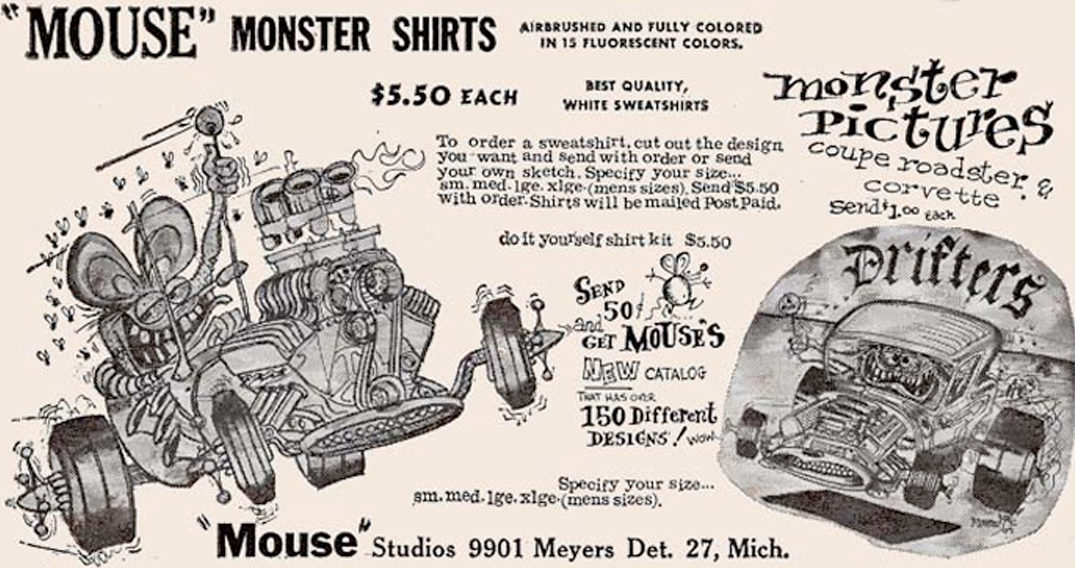 1x: You grew up in Detroit, where in the city did you live? How did you first get into creating artwork when you were young?
Mouse: I grew up around Meyers and Grand River on the west side of the city.  My dad was an animator for Disney for a while, so I was actually born in California and then when the war started they moved back to Detroit. But I was always encouraged to draw. We would sit around and draw all the time. When I started painting hot rod t-shirts I made so much money that my parents quit their jobs and we started a big mail order business. They started working for me. I was about 18-20, and we did that until I left until about 1965.

I would airbrush these shirts in front of people, right there on the spot. Each shirt was done individually. I painted thousands of those. It would be at hot rod shows, the Michigan State Fair things like that. I had a booth at the Michigan State Fair, it was right in front of the Motown revue show. So I would be airbrushing fluorescent colored monster shirts in front to Motown at their peak. 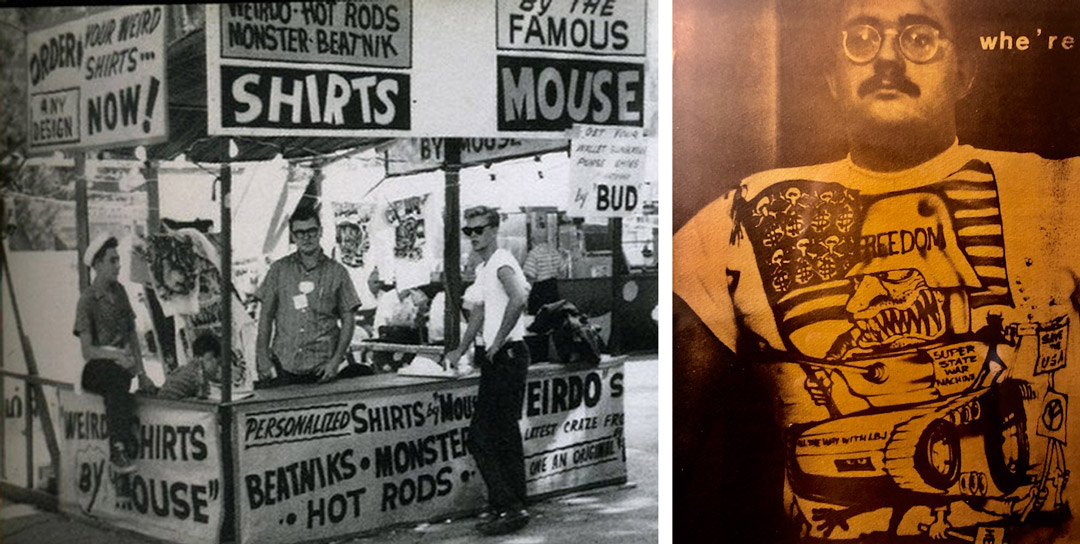 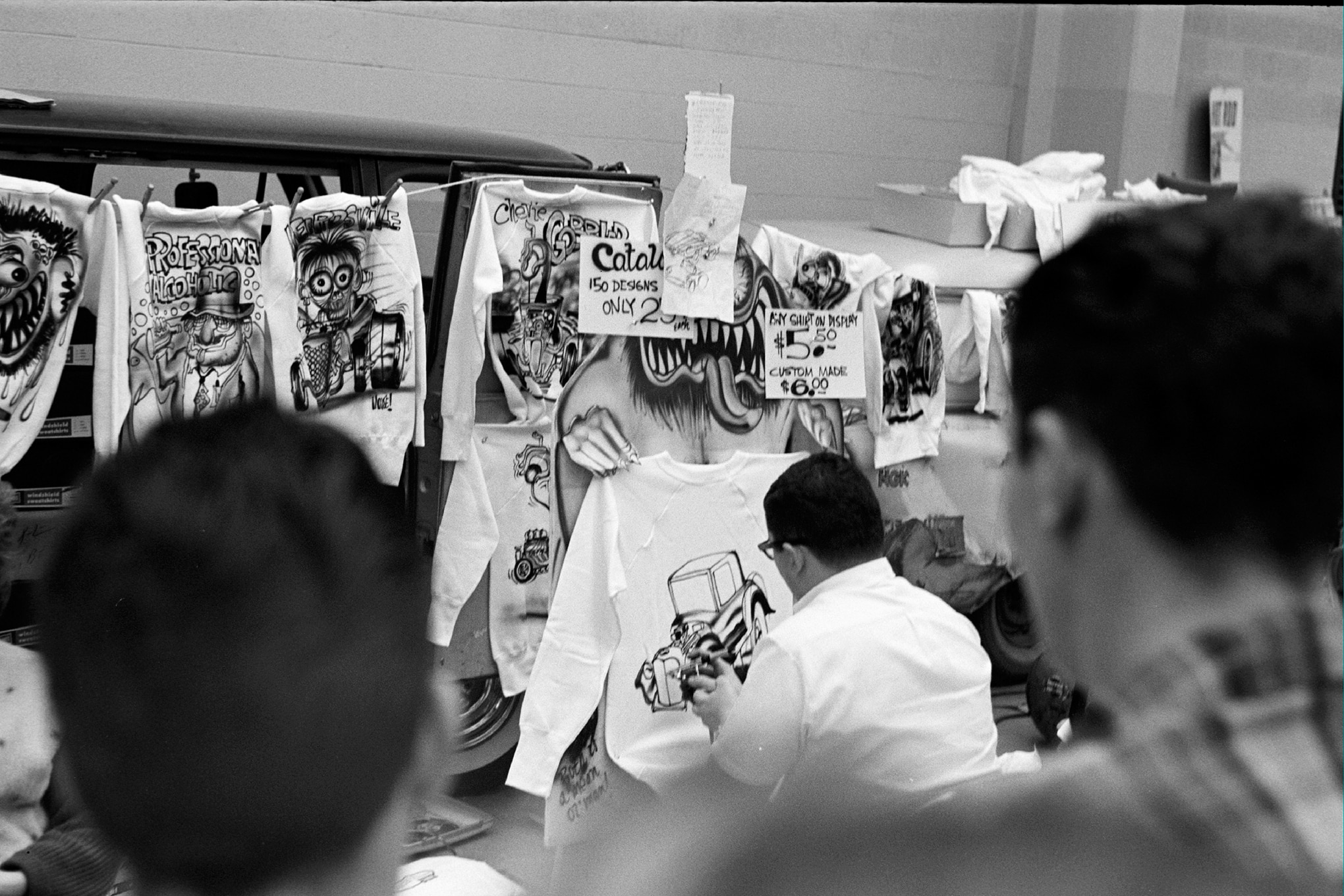 1x: What was one of your first psychedelic experiences?  Any monumental times?
Mouse:  The first time was actually the monumental time. It was Sandoz. I was 23 years old. Every trip was not as good after that. Even the famous (Stanley ‘Bear’) Owsley bathtub Orange Sunshine wasn’t as good as the Sandoz. 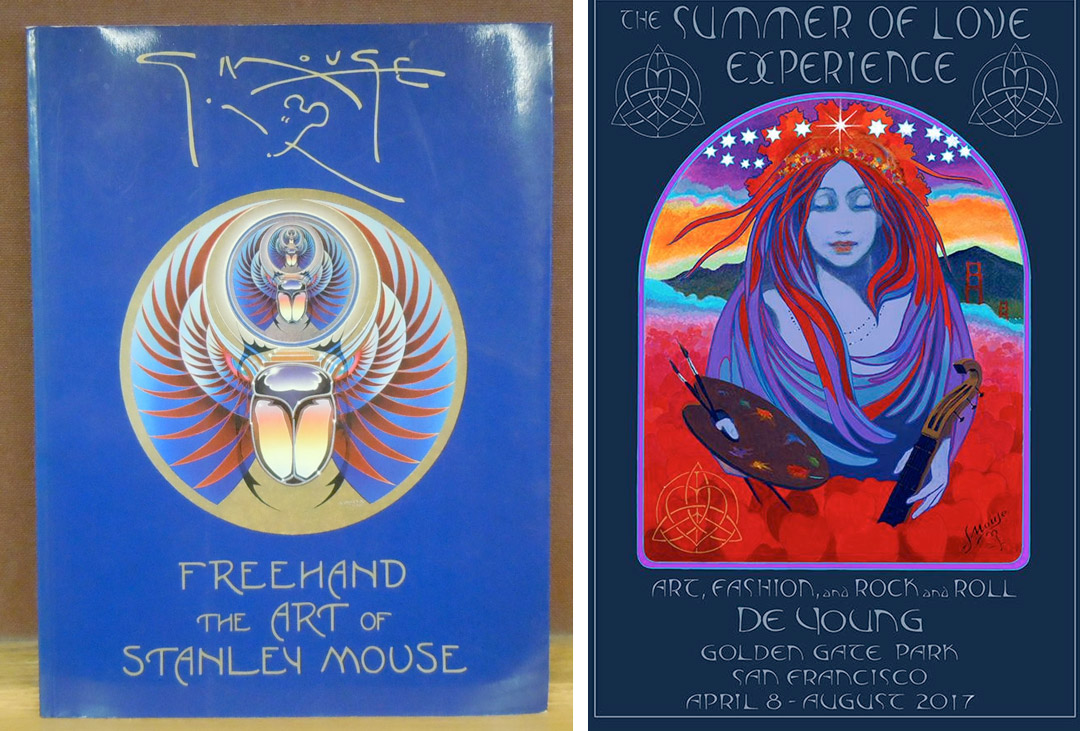 1x: While you were here in Detroit were you going to art school or what were you doing at the time?
Mouse: I was doing a lot psychedelics and going to art school at CCS.  I was hungry for information in my painting class, and my teacher would walk by my easel and say, ‘scrape it off.’ That’s all he would say to me. So I started following him around to other people’s easels and to see if I could get any information from him, and he got mad at me. He said some mean language, and I said fuck this and I left the next day for San Francisco. 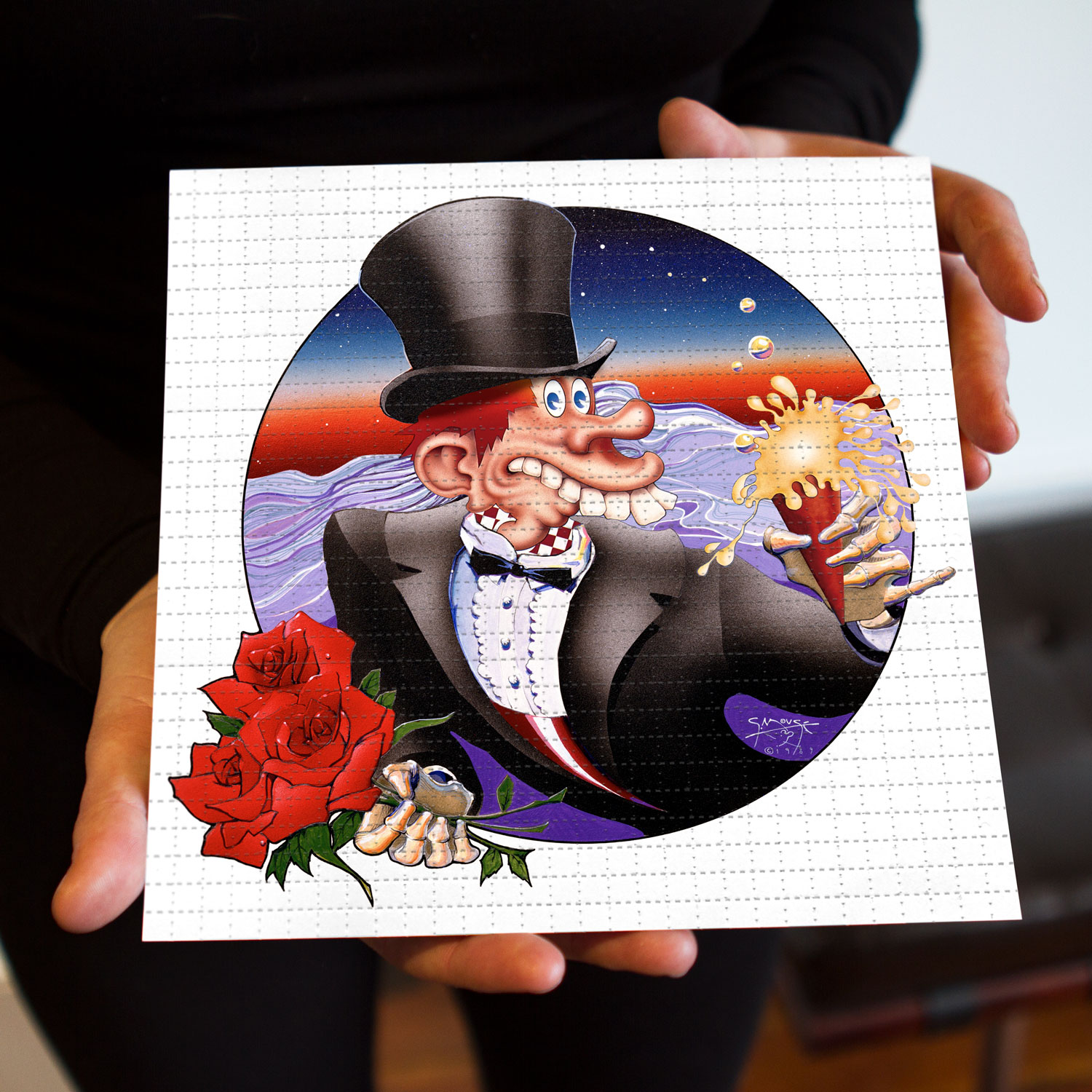