Since 2008 the Houston/Bowery wall has brought out the worlds best, as the latest mural is no different as master Logan Hicks was invited by Goldman Properties to paint his largest ever mural on their historic wall at the corner of Houston and Bowery in Manhattan. Many of you may remember that the project was started earlier in the summer, but was stopped two days into the process. (This was due to mother nature’s wrath combined with a newly rebuilt wall. Don’t worry the Os Gemeos mural is still back there…) On Sunday morning, after almost a week of grueling work, Logan and his team wrapped up the five layer stenciled mural. Each layer on the wall consisted of 210 stencils, making the total stencils used 1050, each was meticulously designed by Hicks in his studio. Take a look at his Instagram (@loganhicksny) for a great hyperlapse video showing how much work it takes to design each stencil. Our man Daniel Weintraub (@halopigg) was invited to document the entire process and here are a sample of the photographs he was able to capture… 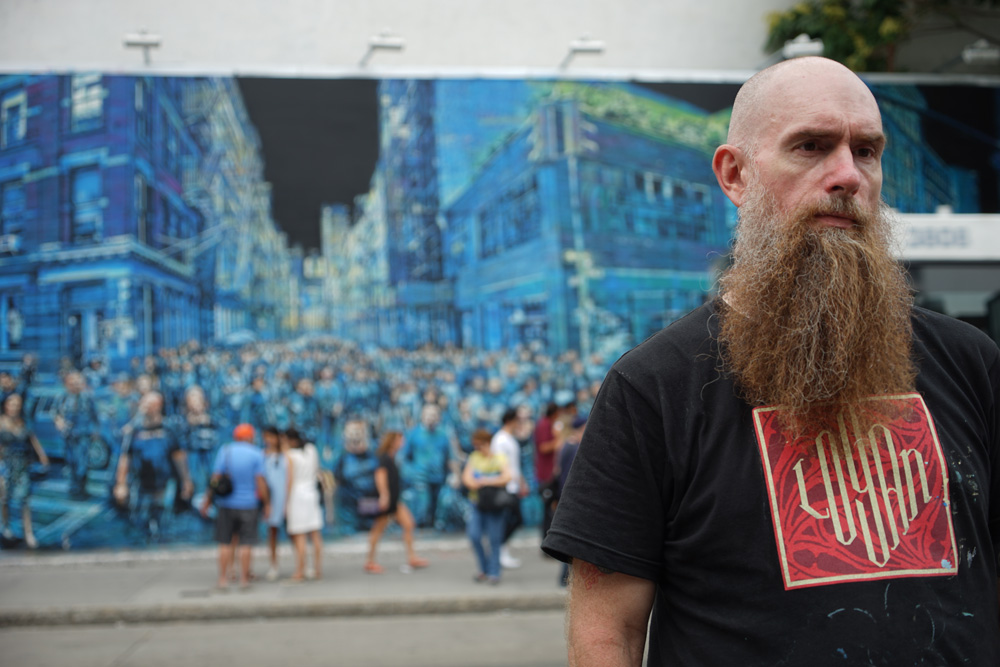 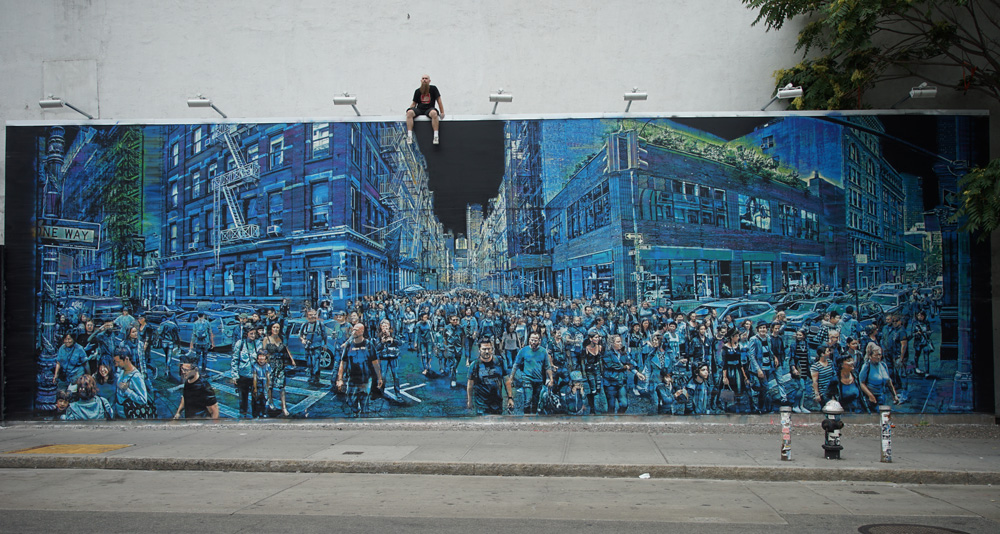 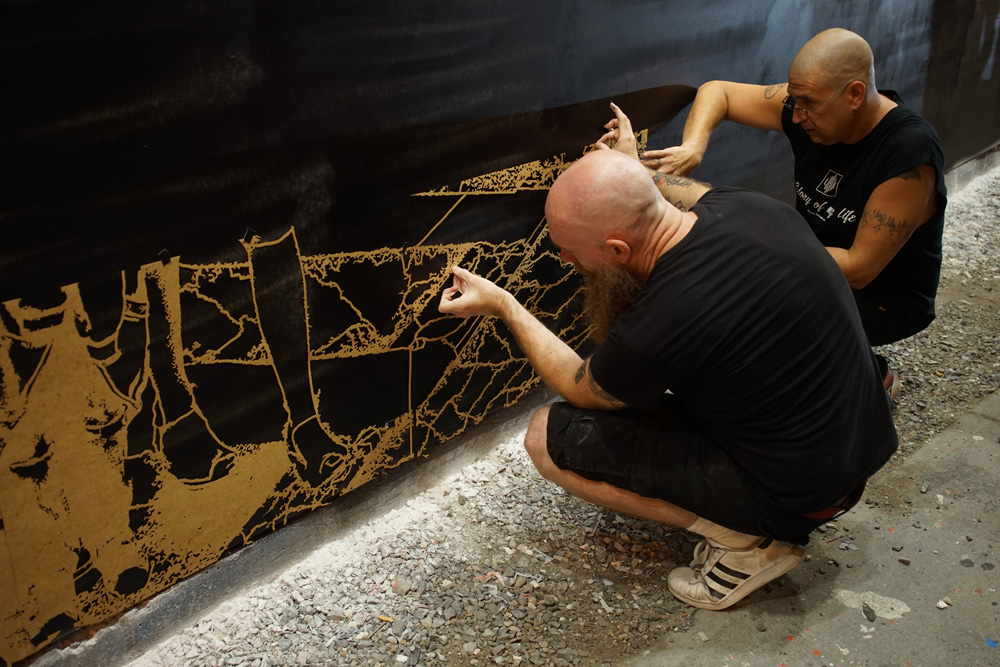 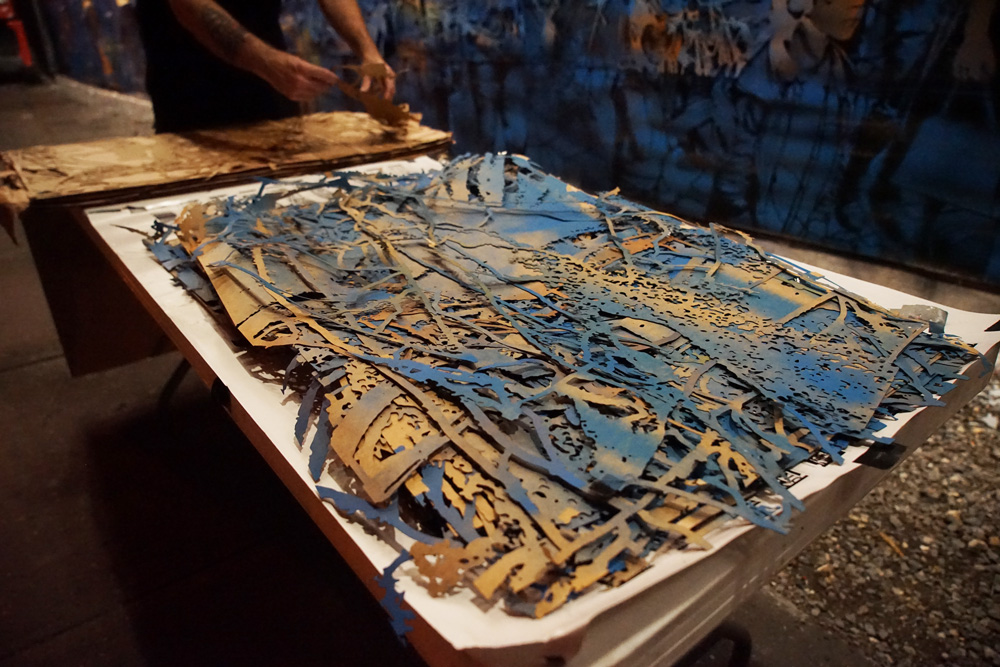 Based in Brooklyn, Logan Hicks became a stand out stencil artist because of his extreme attention to detail. At times using ten or fifteen layers of stencil, Hicks has the innate ability to render photorealistic imagery with his masterful control of the spray can and understanding of color. His work is deeply personal and sourced from his original photographs, using desolate urban landscapes as a metaphor for the loneliness that can be felt living in a city packed with people invading personal space at every turn.

For the next four months, Hicks’ most personal piece to date will greet locals and New Yorkers in their daily meanderings to work, for a coffee run, or trekking across the city. 850 pounds of stencils and five layers at 70 by 20 feet were slowing“Story of My Life” features Hicks’ signature architecture, peppered with a hundred or so figures, modeled by people who have touched Hicks’ life during his ten years living in New York. Hicks’ mother, son, relatives, old friends, new friends, art dealers, artist collaborators, drinking buddies, neighbors and a few strangers gathered together on Greene Street one balmy May Sunday, for a massive photo shoot they were told would one day become a “large mural.” Little did the participants know that their likenesses would be represented on New York’s most iconic street art wall! 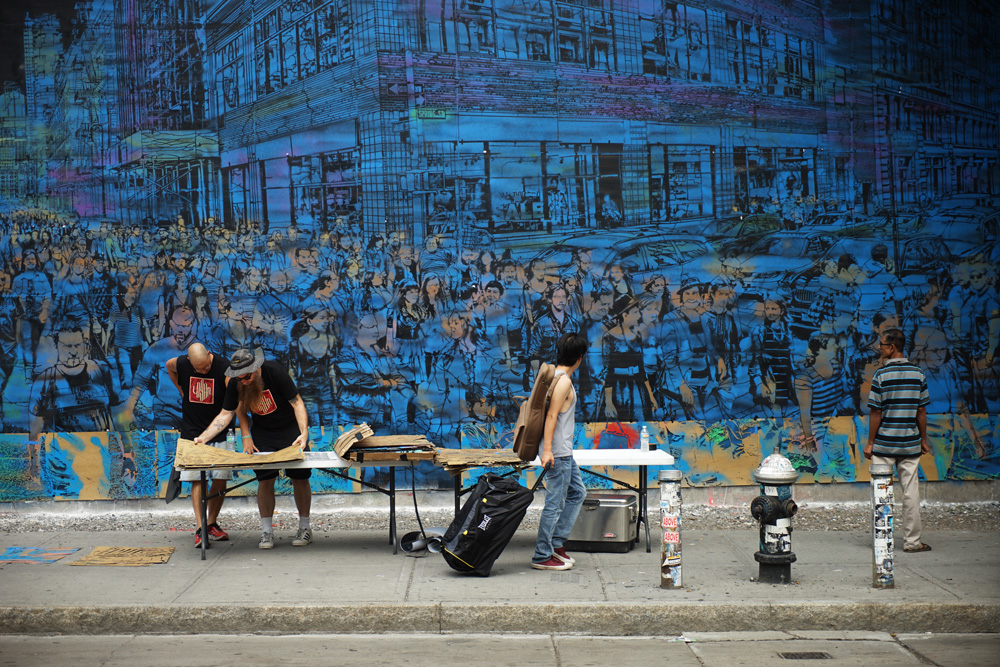 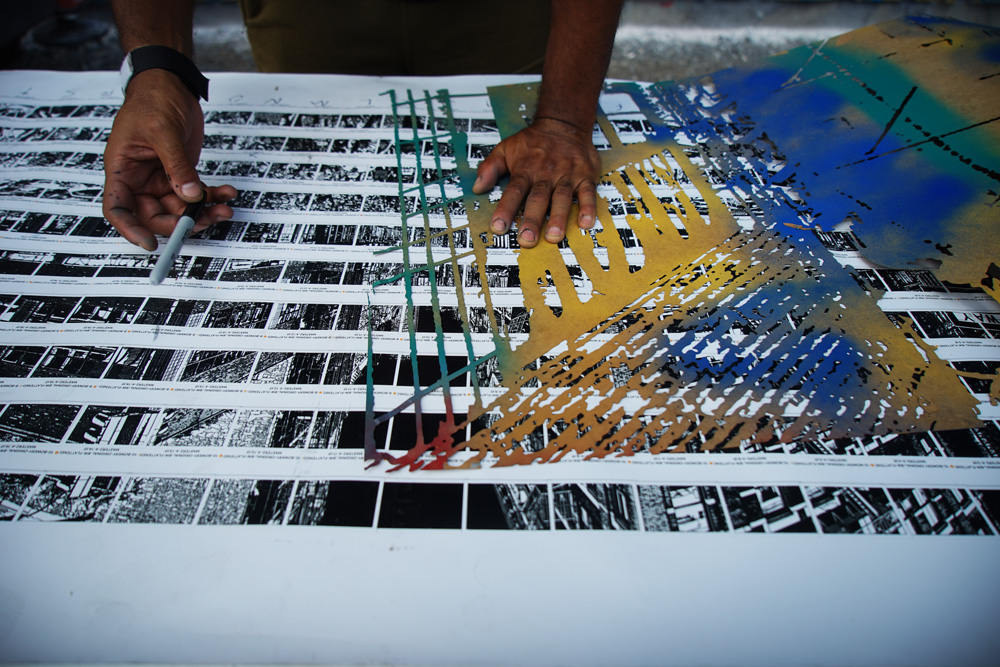 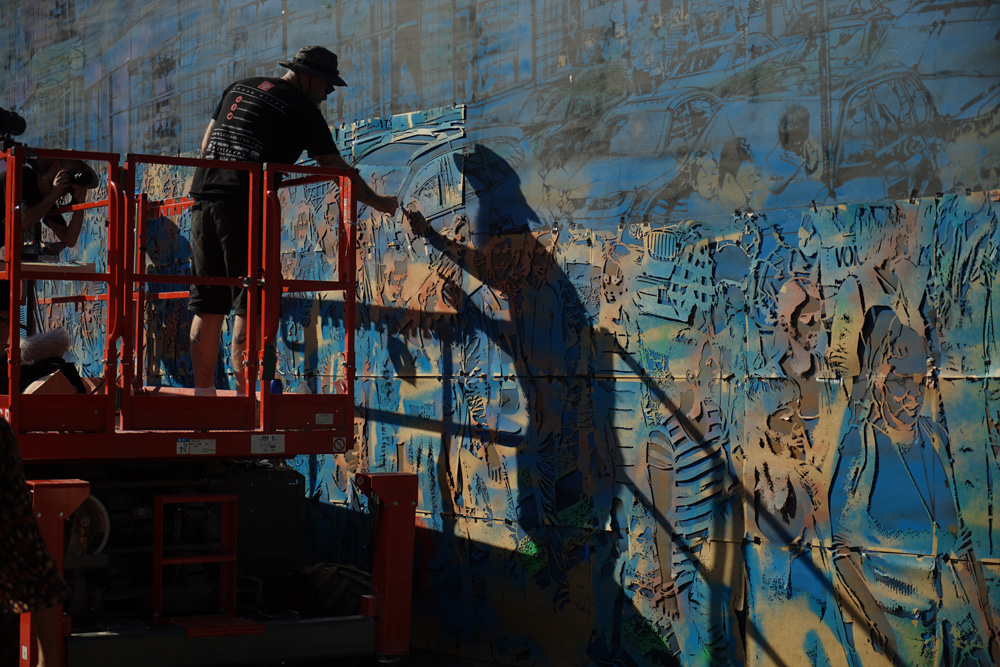 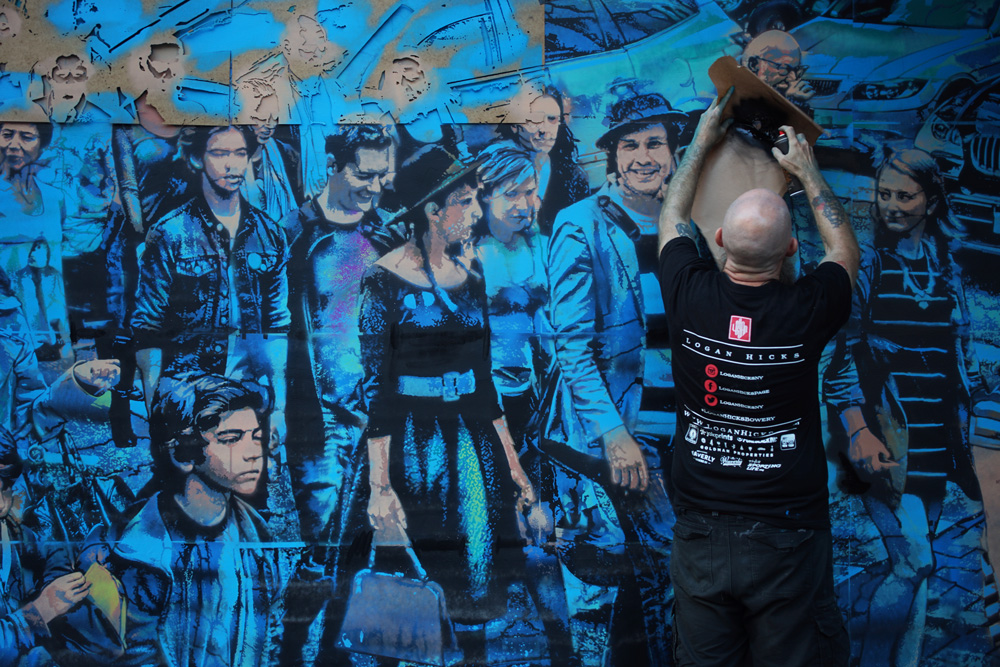 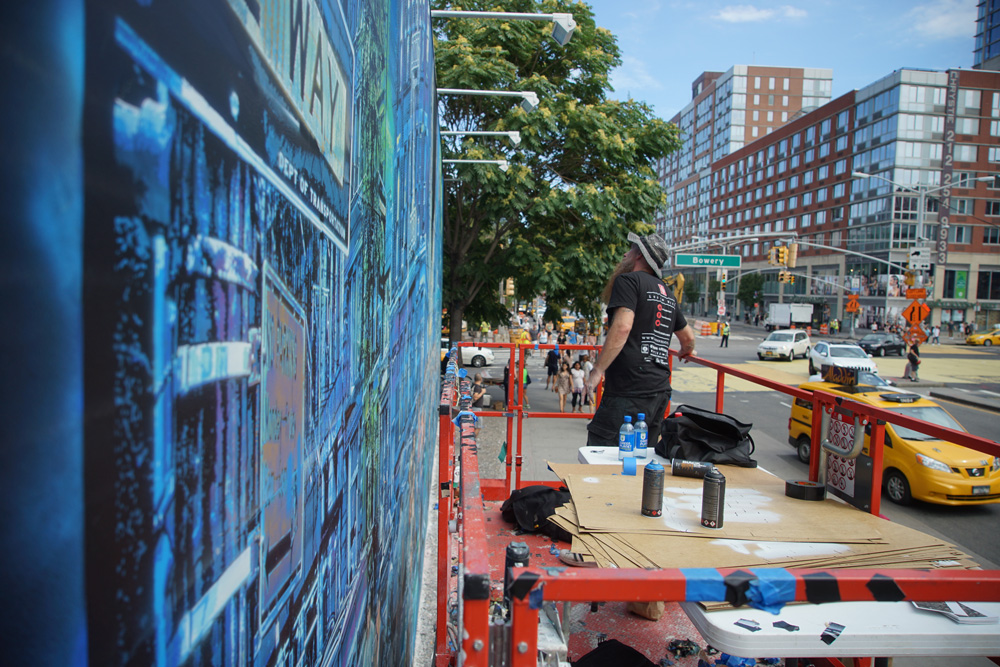 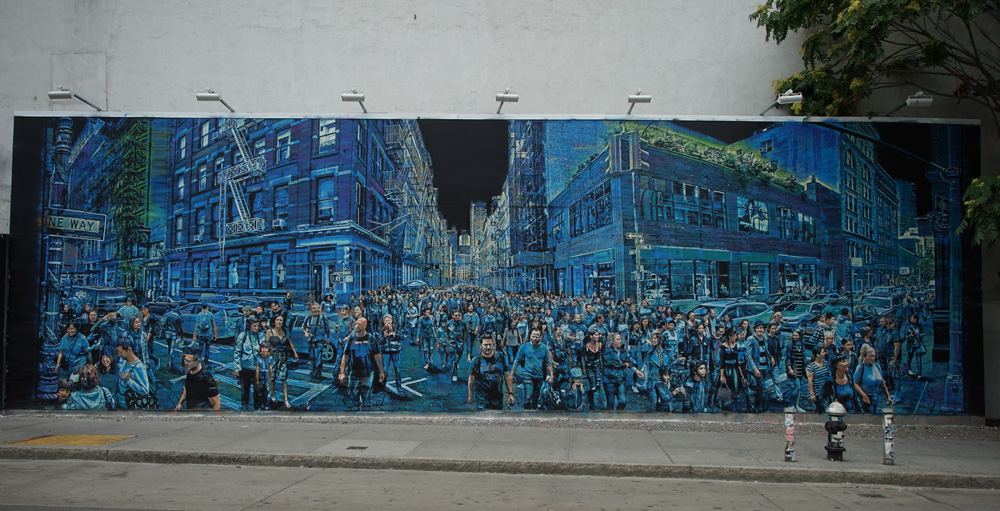 “Bowery Wall is like the crown jewel of public art, so it’s impossible not to think about the support system I have had along the way. In the mural you will find an array of people from throughout my life. From good friends, to family. I chose Soho because when I first started coming to New York, it was the mecca for art galleries, and showing there was the pinnacle of success. Who knew that years later, I’d have a show in Soho and be working with the Goldmans, who were the force behind the neighborhood’s revitalization,” Hicks said.

Hicks also chose Greene Street as the location for the photo shoot for a very person reason- to honor the late Tony Goldman, whose vision brought public art to Soho in the 1980s. (His office at 110 Greene Street is packed with art inside, and is flanked with a Ken Hiratsuka sculpture and the famous Francoise Schein’s subway map piece inlaid in the actual sidewalk). Steeped with meaning, excruciating detail, and the perfect balance of color, Hicks’ “Story of My Life” will also be known as the hottest place to take selfies in New York this summer. 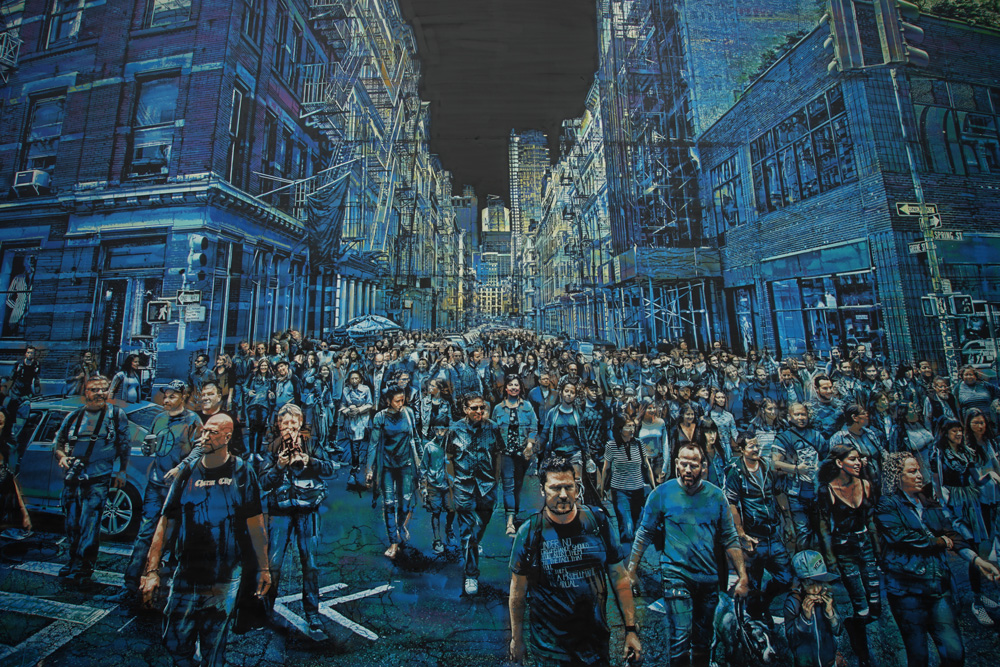 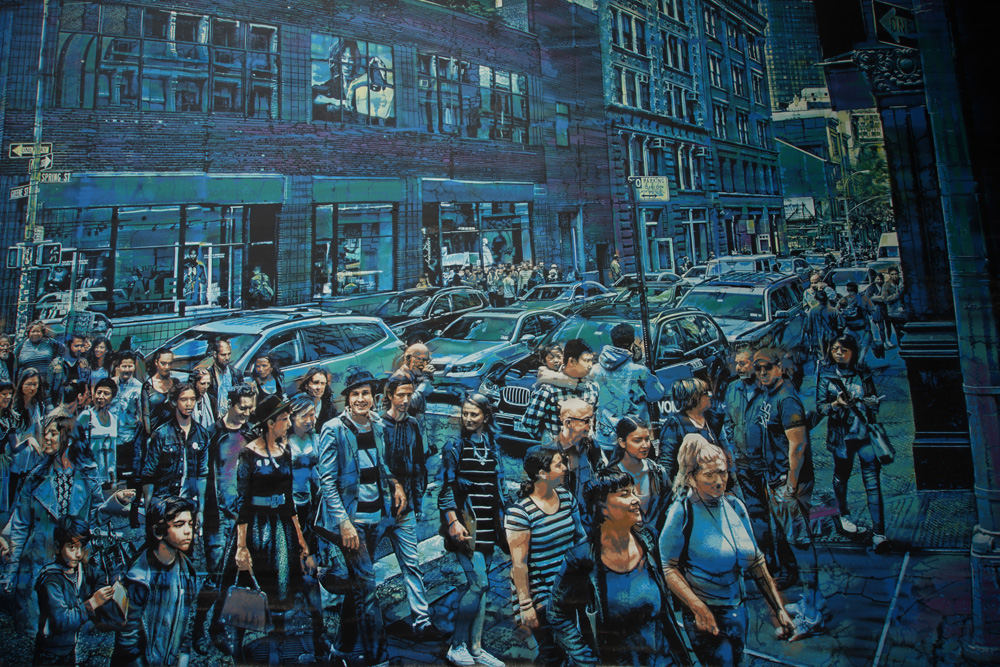 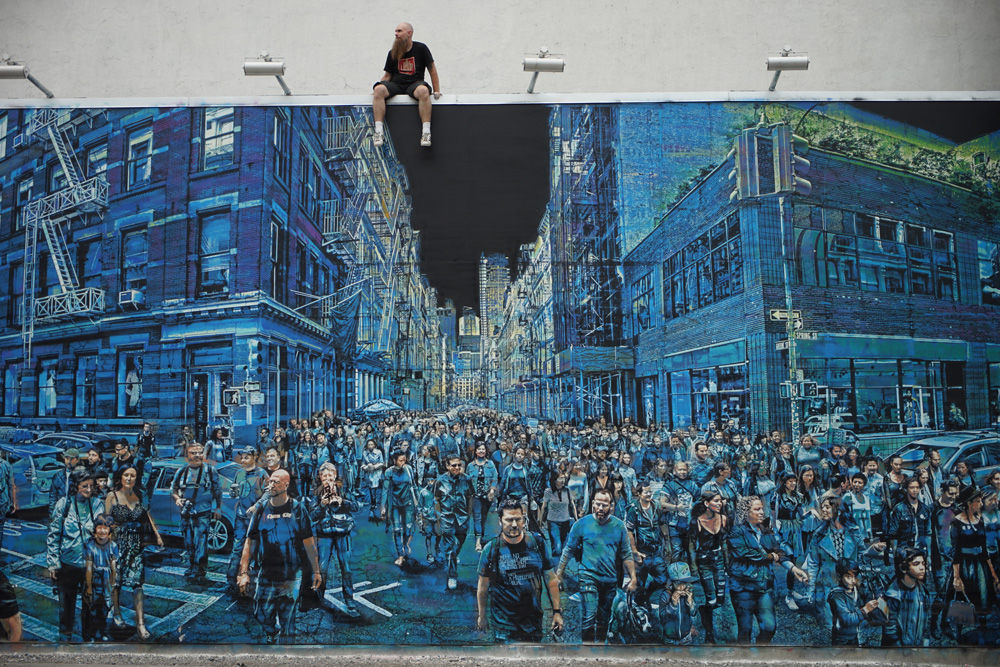