After kicking off Bicycle Day 2017 on his own last year, we’re excited to welcome back Mike Giant who returns with three new blotter sheets featuring his signature style and iconography in alternating checkerboard patterning. Read on as we caught up with Mike Giant to discuss his latest trio of blotter sheets, his time back in San Francisco in the ’90s and more. . .

1xRUN: Tell us a little bit about these 3 prints, anything immediate you would like us to highlight about each of these 3 images?
Mike Giant: The Smiley graphic is one of my graffiti throw-ups, a “GI”.  I started writing it on walls in the mid 1990s.  The Sun graphic is based on LSD that I used to eat in the late 1990s.  The only difference being the ones I ate were on yellow paper.  The Zen graphic is a Zen circle, known as Enso 円相.  It represents absolute enlightenment, strength, elegance, the universe, and mu (the void).  I often contemplated these things when I was a regular LSD user and always thought it would be a great image on acid tabs.

1x: Are these images part of a recent theme, series or show that you had? If so how do they fit into that given grouping?
Giant:  These are 3 of 6 LSD graphics I illustrated in early 2017 after reminiscing about my days as a regular LSD user (at least once a week).

1x: When and where were each of these designs created or first used by you?
Giant:  3 of the 6 graphics in this series were based on real LSD that I ate and sold.  The other 3 are things I thought would work great as blotter art.  The print run with 1xRUN is the only time these have been used on products.

1x: Tell us how the idea and execution came about for these images?
Giant:  I researched blotter art and found some that I remember eating and selling.  The others I made up.  I made the illustrations with Sharpie markers on Canson drawing paper.

1x: What is unique about these 3 prints compared with your other work?
Giant:  This is the only time I’ve drawn LSD blotter art.

1x: Why should people buy this one of these prints?
Giant:  They’re really special when compared to what I usually offer and I’ll bet they’ll be worth some money someday.

1x:  We talked a bit about your history with LSD last year for Bicycle Day, but tell us a bit more about what some of your first psychedelic experiences were like when you got to San Francisco in the early 90s and were hitting raves, writing graffiti and working at Think Skateboards… When was the first time that you ate acid and what was the experience like?
Giant:  I think the first time I ate LSD was just days before I moved to San Francisco, in September of 1993.  I was at a club that played house music and a friend gave me a tab of acid that he promised was clean and good.  I ate it and danced and after a while I noticed sparkles and the walls became liquid hallucinations.  I thought it was great.  I have no recollection of how I got home that night, but I do remember audio taping myself giving descriptions of the hallucinations I experienced.  Wish I still had that tape!  I eventually fell asleep around dawn only to be woken by the sound of a car horn right outside my apartment window at 9am.  It was my mom.  I forgot that she was taking me to DMV that morning to get my license updated before moving to California.  I got my shit together, apologized for making her wait and we went to DMV.  I was still tripping at DMV and specifically remember having a hard time with the eye test because the letters on the screen were moving around.  And it was pretty obvious I was on drugs in my license photo.

1x: At the time how did it fit in with what you were doing in life and how did it change things for you during that era?
Giant:  The first few years that I was living in San Francisco I was going to clubs and raves with my friends at least once a week and taking lots of LSD, mushrooms, mescaline and ecstasy, as well as lots of 40s and weed.  Everything was easy to get, clean and affordable.  All those substances got my mind open and got me into some crazy adventures that I look back on fondly.

1x: What effect was there to you being in San Francsico, and what was the city like at that time?
Giant:  SF was full of really individually-minded people in the 1990s.  They were also adventurous people.  Adventurous with drugs, sex, art, food, etc.  And I was into that.  There was always something fun to do back then.  I’d go out every night and do something different.  Some nights it was house clubs, some nights it was metal shows at bars and other nights it was hip-hop jams in warehouses.  I feel really lucky to have been able to experience SF back then.

1x: How did any of your psychedelic experiences play into what you were doing with your artwork at the time? If at all…
Giant:  I did quite a few graffiti pieces both in daylight and at night while under the influence of LSD.  Sometimes the acid had a dramatic effect on the design of my lettering and other times not so much.  I can also remember times when the letters came to life right in front of me, breathing, contorting and coming off the wall. 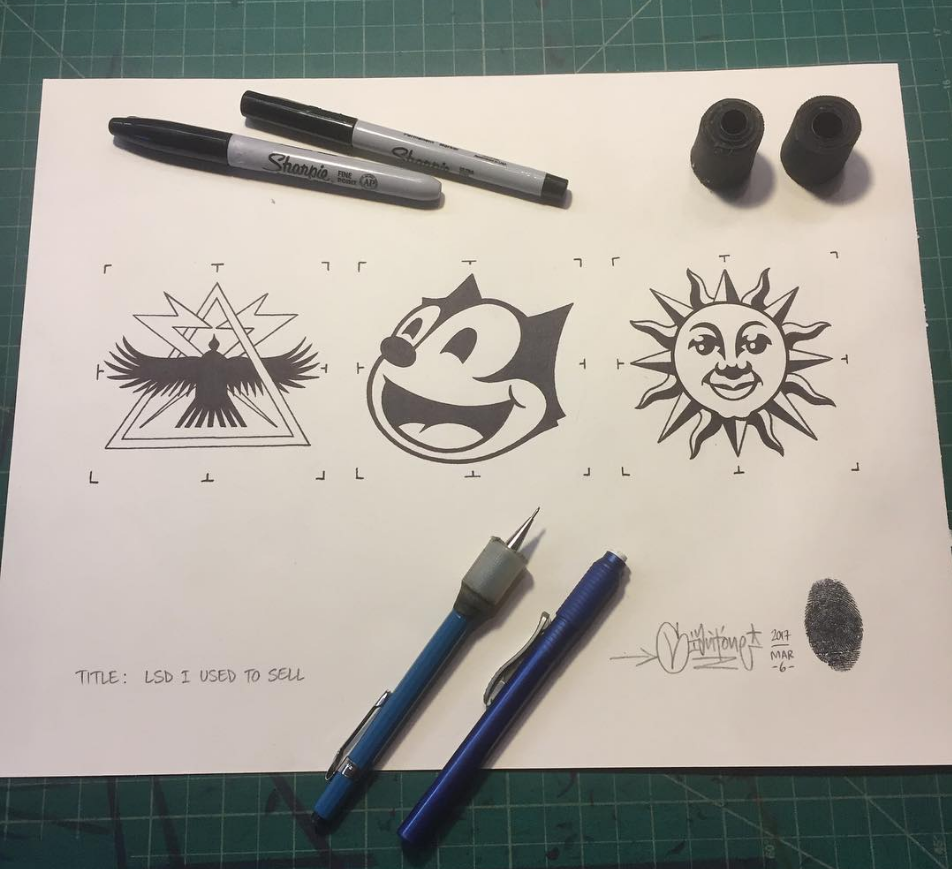 1x: As you have gotten older how do you look back at that time and how it effected you?
Giant:  Looking back I don’t where I got the courage to do LSD so much back then.  The last time I took it was in 2004 and it was the heaviest trip of my life.  I learned a lot on that occasion but I haven’t felt the need to revisit LSD since.  All in all I’m really glad for the LSD experiences I’ve had.  I think they’ve had a profound impact of my life outlook, creative output and spiritual identity.

1x: What are some of the ways you try to push yourself with your current work and what are some of the ways you have always tried to keep things interesting over the years?
Giant:  I just try to continue to refine how I draw.  I’m always trying to make the current drawing better than the last one.  And to keep things interesting I’ve always liked to mix up the mediums I work with, whether it’s spray painting, tattooing, drawing or building scale models.

1x: Do you have any big shows or events coming up that you’d like to share?
Giant:  Look for my graphics in all the Vans stores that are opening across the US this year.  I’ve got a show with Sam Flores in Albuquerque in July.  And my lowrider box van project will be debuting at SEMA in Las Vegas on Halloween weekend.  I’m really looking forward to that.