1xRUN is excited to welcome in artist Carly Chaikin, as the star of Mr. Robot releases her very first limited edition print Playground Love. Painted over the course of a year, this piece was part of Chaikin’s first art show back in 2014, and found the artist challenging herself to capture the essence of an otherwise mundane situation, working to effortlessly pull the viewer into this intimate scene. Read on below to find out more about Carly Chaikin’s earliest influences, her debut limited edition print release and more. . . 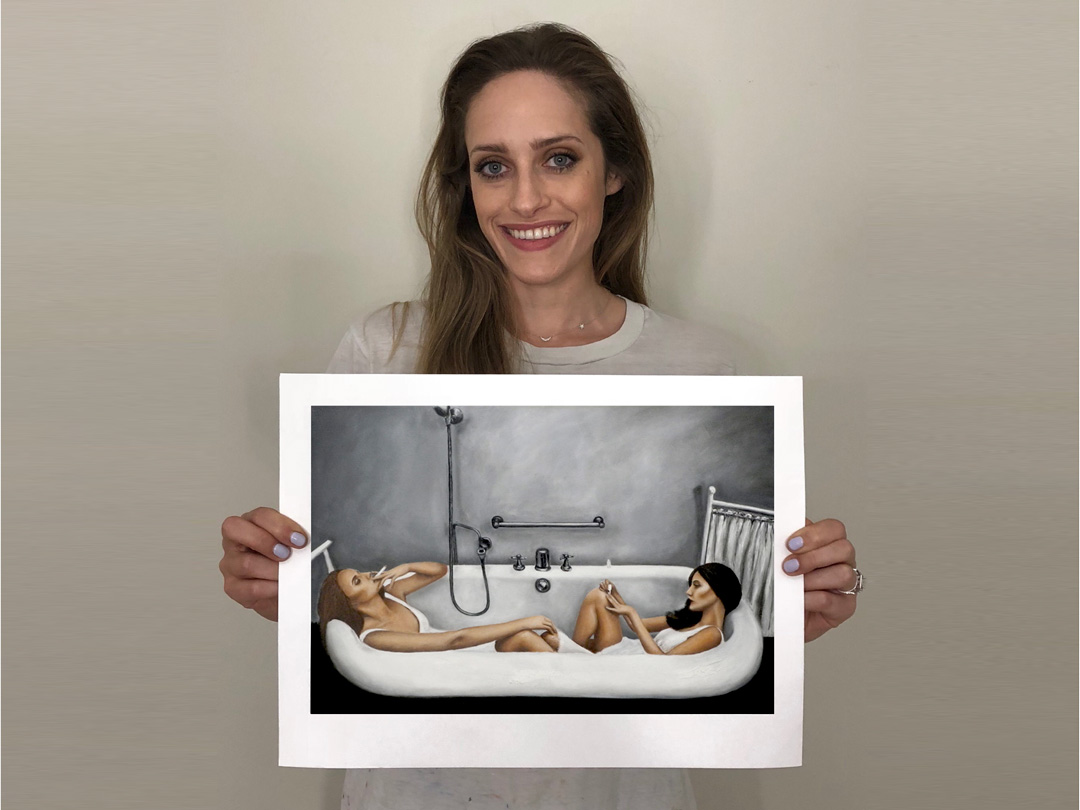 1xRUN: Tell us a little bit about this painting, anything immediate you would like us to highlight about this imagery?
Carly Chaikin: This is one of my favorite paintings as well as one of the hardest ones I’ve done. It was hard and a little tedious trying to make sure I captured their essence and body movement to where it felt like you could walk into the room and hang out with them if you wanted to… and if they’d let you. Funny enough, even with all of the detail in the girls and tub my favorite part of the painting has always been the back wall.

1x: When was this piece originally drawn and created? What materials did you use?
Chaikin: I started this one in June of 2013 and finished it right before my first art show in April 2014. Oil on canvas. 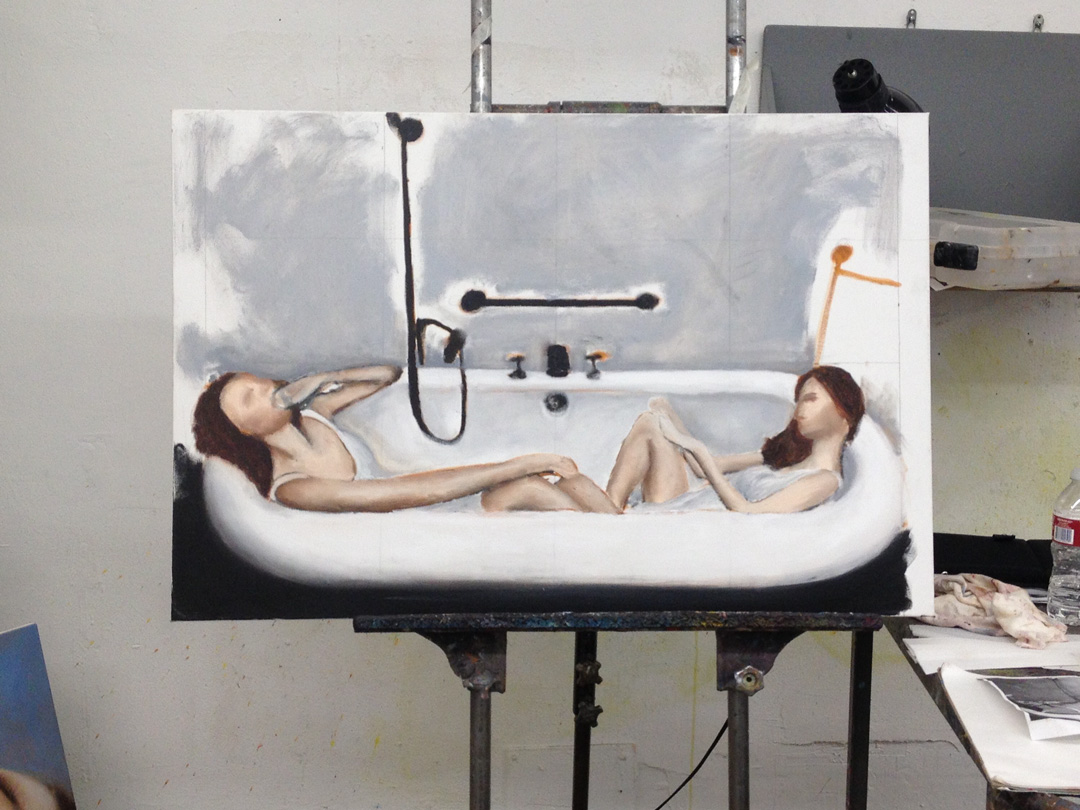 1x: Tell us how the idea and execution came about for this image?
Chaikin: I loved the image of this. Two girls in a bathtub, but it wasn’t sexual, it was mundane.

1x: How long did this image take to create from start to finish?
Chaikin: From start to finish it took a little under a year. I always work on a few paintings at once since oil takes so long to dry, but I also tend to get really frustrated with pieces, so a lot of the times I’ll take breaks from it and try to come back with a fresh pair of eyes… this was probably one of the paintings I got the most frustrated with. 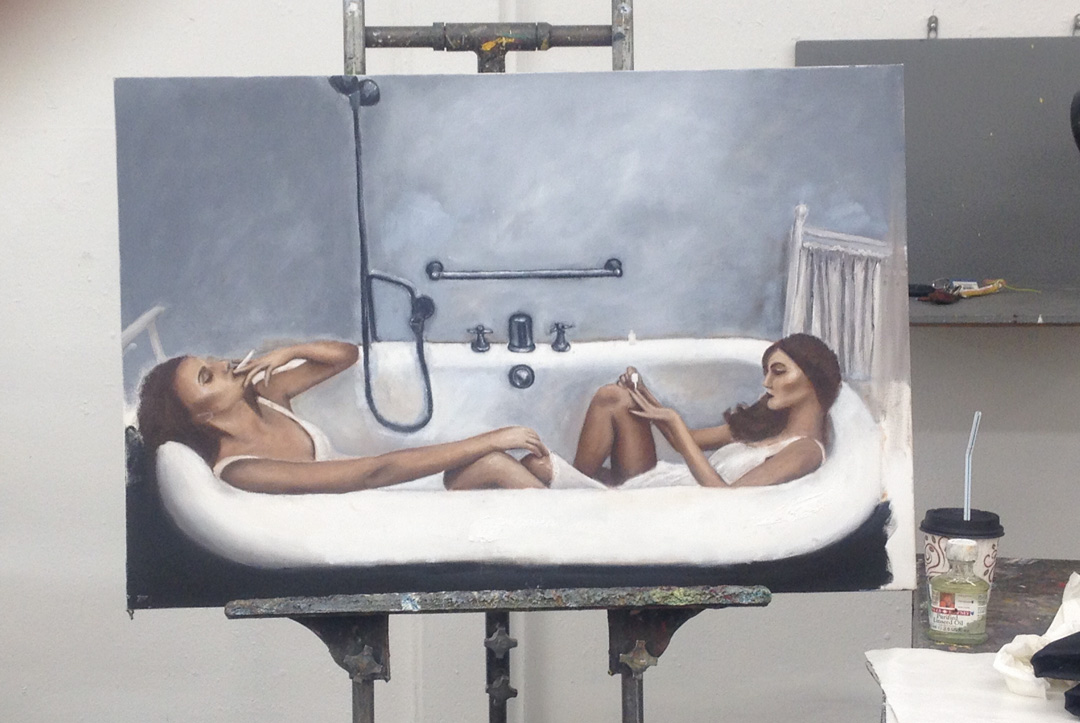 1x: What is unique about this piece compared with your other work?
Chaikin: This has always been one of my favorite paintings because I feel like just by looking at it you can understand them. Their essence, their attitude, their boredom; their satisfaction.

1x: Why should people buy this one of these prints?
Chaikin: Because it’s cool. 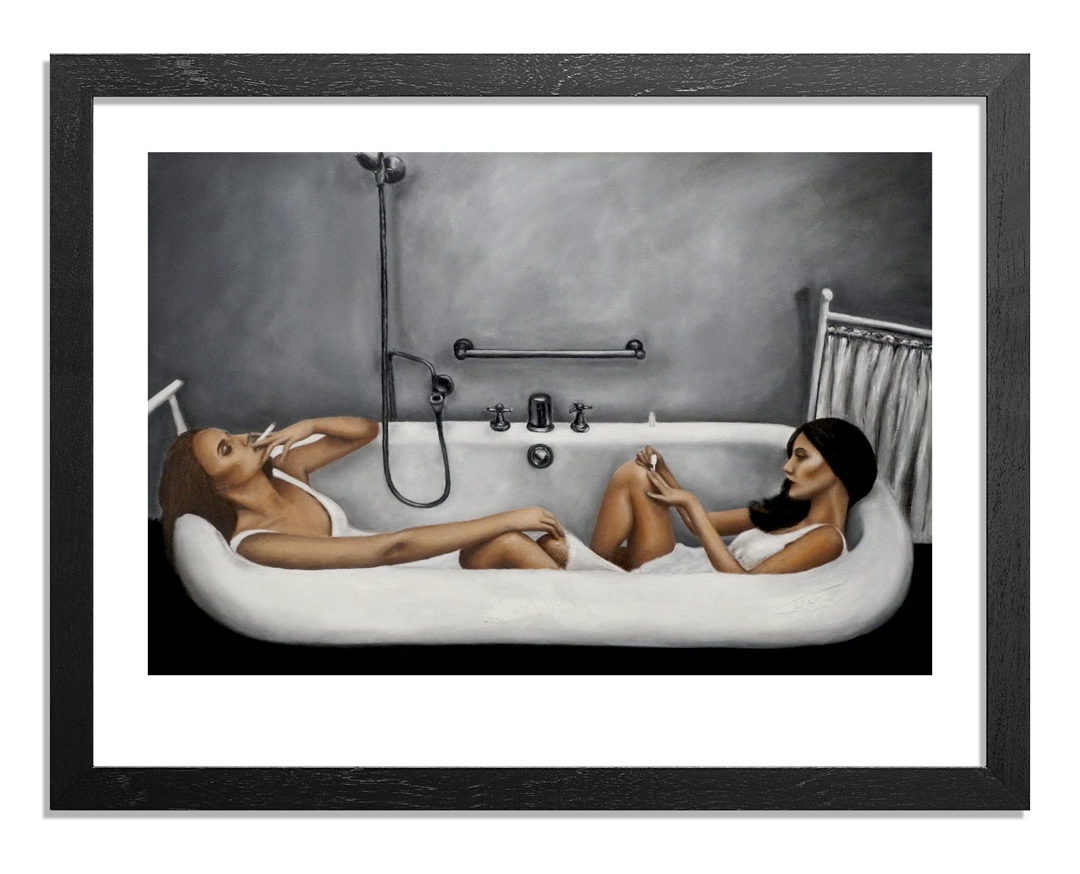 1x: When did you first start making art?
Chaikin:  My mom had always put me in art classes since I was little. In middle school, the art teacher put me in the high school painting class and that was my first introduction to oil painting. I’d say I started really painting though when I was 17. I started taking a workshop style class at Brentwood Art Center which is where I learned to paint. A lot of it was trial and error. I turned the 3rd floor loft at my dads house into my own art studio and ruined all of the carpets and walls, so he eventually just ripped them out for me, put in cheap vinyl floors and let it actually become my studio. Everywhere I’ve lived since then, have an art studio in my house has been a requirement.

1x: What artists inspired you early on? What artists inspire you now?
Chaikin: Dali was and has always been my favorite artist. Now, there’s so many. I wish I was more educated when it came to different artists and painters. I’ve always been amazed by Chuck Close, and recently Hockney’s pool painting that just sold has been at the forefront of my mind, because the piece I’m working on now in a way feels similar… maybe it’s because they both just have pools though.

No Strings Attached 24” x 24” Oil on Canvas I painted the original when I was 17 (2nd slide) and then a few years ago picked it back up and re did it. Great way to see the progress of how much I grew as an artist over 6 years #carlychaikinart

1x: Do you listen to music while you work? If so what? If not then what is your environment like when you work?
Chaikin: It’s impossible for me to paint without listening to music. I have such a wide variety of music that I like so most of the time my phones just on shuffle, but it’s mainly Bob Dylan, Tom Petty, Neil Young, Alanis Morissette, Pink Floyd, Drake, Jay Z, Kanye Lil Wayne… my list goes on and on.

1x: If you could collaborate with any deceased artists who would it be and why?
Chaikin: Definitely Dali because he’s an absolute genius and nutcase. I think the collaboration would be more of me just standing back in awe and maybe throwing a brush stroke in here and there.

When your paintings bigger than you 📸 @dutchmayhem

1x: What was the first piece of art that you bought? Do you still have it?
Chaikin: I actually have never bought a piece of art. Being a painter has saved me a lot of money because I’ve been able to decorate my house with different paintings of mine. I definitely do want to start collecting art though. There’s a piece by this artist Andrew Myers that I’m dying to buy.

1x: Any big shows or events coming up that you’d like to share?
Chaikin: I just had an amazing art show called NOUN earlier this year, so it’ll probably be a few years until my next art show. However, I do have a project “New Year, New You” on Hulu that’s coming out in a month that’s part of the series “Into The Dark.”

1xRUN: Where else can people find out more about you?
Carly Chaikin: Instagram @carlychaikinart + @carlychaikin