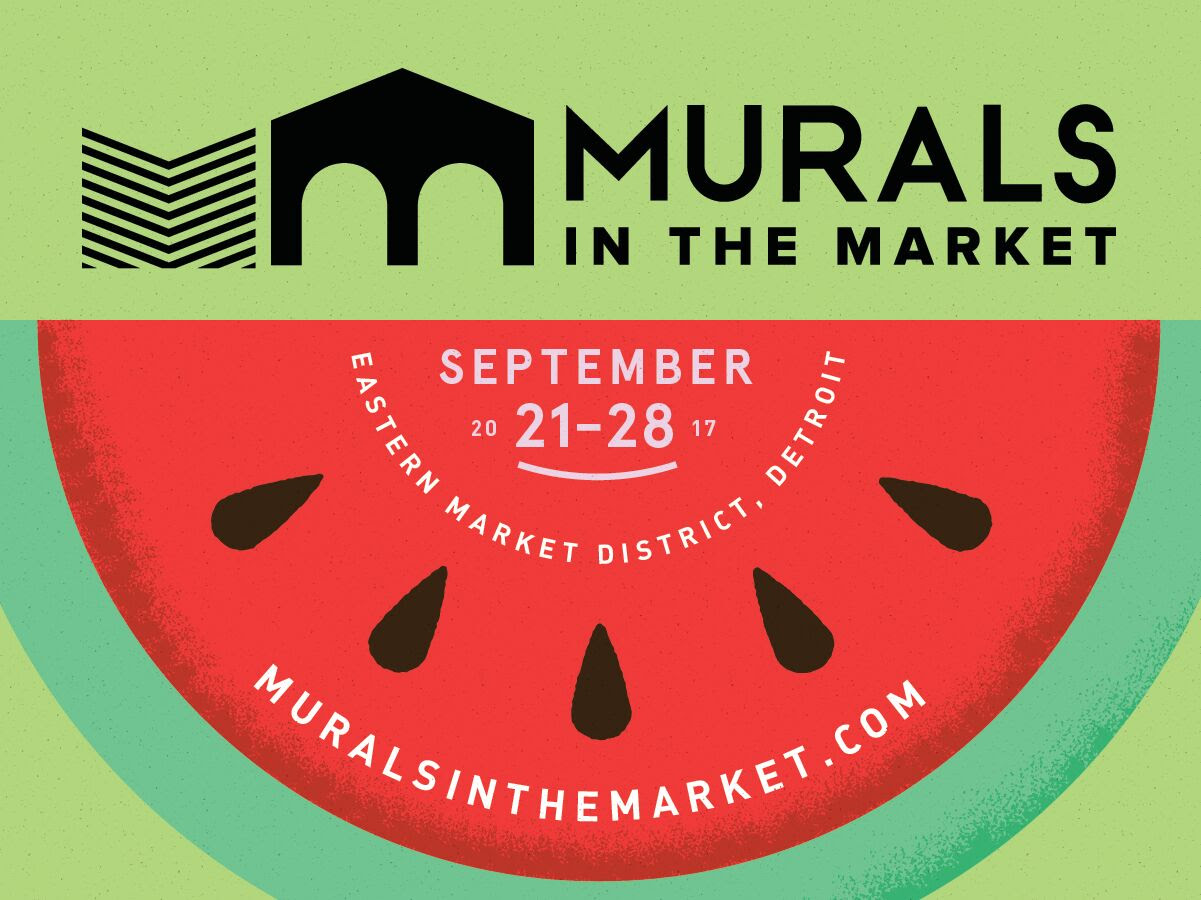 Coming this September 21st through the 28th, Murals In The Market makes a triumphant return to Detroit’s Historic Eastern Market as more than 50 local and international artists will be painting live throughout the district over the course of eight days in the third year of the city’s only international mural festival. Adding to Detroit’s unique history of placemaking and public art, we are proud to announce our new partnership with the William Davidson Foundation and welcome back the John S. and James L. Knight Foundation and Eastern Market Corporation for this magnificent public arts festival.

“We’re delighted to be the presenting sponsor for Murals in the Market,” says Darin McKeever, chief program and strategy officer at the William Davidson Foundation. “In a short time, this festival has become a signature artistic and cultural experience that brings tens of thousands of visitors to Eastern Market and all the small businesses, vendors, and artists that call it home. Its expansion to community markets across Detroit adds to the momentum building within the neighborhoods.” 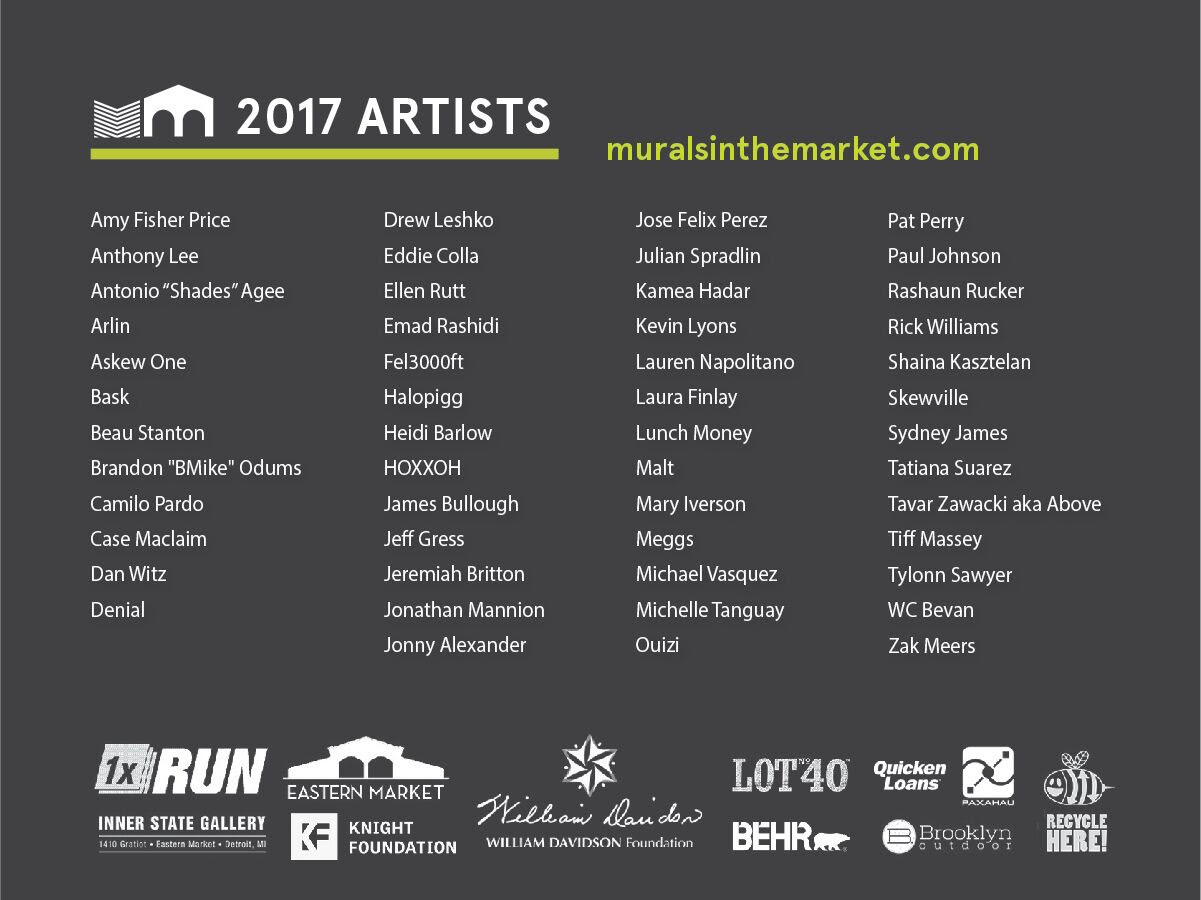 Visit Murals In The Market.com To Explore The Roster

Elevating Detroit’s Eastern Market to the top of the international art stage for the third consecutive year, Murals In The Market continues to expand its reach as five local artists bring community murals to five of Detroit’s Community Markets throughout the city. In addition, Murals In The Market has partnered with the Detroit Jazz Festival to bring a new mural to Bert’s Warehouse, as well as satellite murals to locations throughout the city, including on the Dequindre Cut.

This year the festival will also join forces with Our Issue, led by former Detroit Lions linebacker DeAndre Levy, to help raise money and awareness for Enough SAID (Enough Sexual Assault in Detroit), an independent collaboration between Michigan Women’s Foundation, the Wayne County Prosecutor’s Office and the Detroit Crime Commission. The collaborations’ aim is to test more than 11,000 forgotten rape kits.

Building upon the resounding success of the festival’s first two years, Murals In The Market will continue to expand Eastern Market’s walkable footprint, giving visitors locally and internationally a look into businesses and areas often unseen and underutilized, with more than 100 public murals strategically placed throughout the Market District. Local and national foundations and sponsors will help make 2017 the best yet, as presenting funders, the William Davidson Foundation along with the Knight Foundation and 1xRUN will be joined by Eastern Market Corporation, Lot 40, Behr, Quicken Loans, WeWork, Detroit Jazz Festival, Brooklyn Outdoor, Aptemal, Paxahau, Recycle Here!, Thinkspace Gallery and Inner State Gallery. House paint for Murals In The Market will be provided by Behr, an industry leader that is committed to helping artists create outdoor works of art that will stand the test of time.

Public art has long been an integral part of the Eastern Market District experience.  The 2017 Murals In The Market festival will expand on 40+ years of large-scale public murals by bringing a new batch of world-class local and international artists to add exciting new works throughout the market. Artists from as far away as New Zealand, Germany and Hawaii will join a diverse group of Detroit-based artists that have made an impact on the public art scene.

Once again Murals In The Market will continue to enhance the market experience and the District’s transformation into a must-see destination for arts — as well as food — in Detroit.  For the past six years, 1xRUN and the company’s fine art gallery Inner State have curated and produced  more than 100 murals in Eastern Market alone and more than 200 murals throughout the City of Detroit. With the creation of these murals, each area has seen a significant visual impact on the surrounding neighborhood as well as increased traffic, additional economic development and increased safety.

2017 Murals In The Market Participating Artists Include: