This iconic image of Carol Shelby’s 1965 GT350 was first painted by Camilo in 1990. A few years later a bar was set to open by Detroit natives in NYC’s Lower East Side. The owners of the Motor City Bar, friends of Camilo, called upon him to replicate this image as a huge mural stretching across an entire wall. 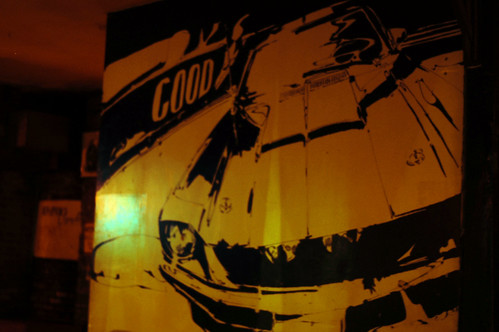 Camilo embraced the motion, action, and brute style of Shelby’s muscle car in his original watercolor painting. When revisiting this image for a print, Camilo was experimenting with background treatment, then as artists do started painting with watercolors on top of the silkscreened print; this became a main theme with the GT350 series. The use of watercolors makes this series of silkscreen prints a unique replica of the original and maintains Camilo’s vision: for each print to have it’s own voice.

This series of 125 prints varies in colorways and mediums. Some of the prints have an acrylic or watercolor background, while others have the watercolor applied over the silkscreened image.

With only 125 available don’t hesitate if one speaks to you.