British painter and author Stanley Donwood is best known for creating the inseparably iconic artwork for Radiohead since 1994’s My Iron Lung EP.  After meeting Thom Yorke in art school, the two began collaborating hand-in-hand to create the accompanying visual artwork for the wide-ranging albums of the British rock band, as well as Yorke’s solo albums. For his debut RUN, Donwood has appropriately chosen Run, pulled from his 2007 exhibition “If You Lived Here You’d Be Home By Now” at the trendsetting Lazarides Gallery. Created during the In Rainbows era, Donwood painted Run in a derelict mansion in the British forest, while listening to what would eventually become Radiohead’s “Down Is The New Up.” Pulling equal inspiration from American signage and a looming apocalyptic outlook of “interminable housing tracts,” Donwood would create the repeated patterning for the exhibition and the visual language that would evolve from mazes of trees mirrored by a blank wasteland. Each print in this edition is uniquely silver leafed and limited to an edition of only 50. Read on as Stanley Donwood gives us the story behind his debut edition, his earliest inspirations and more… 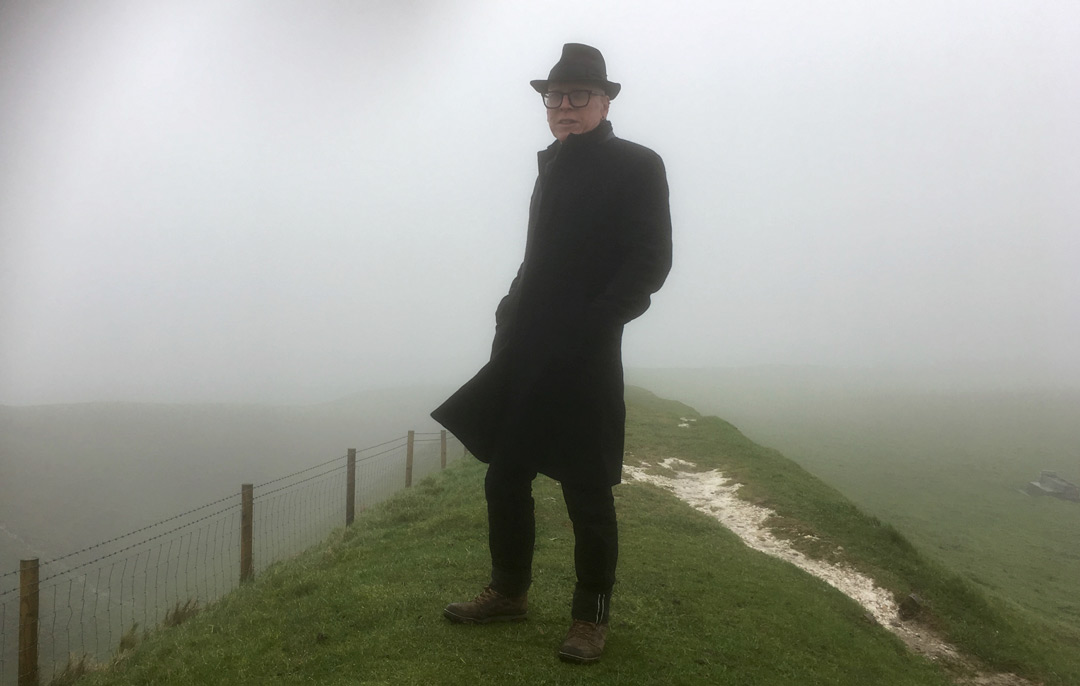 1xRUN: Tell us a little bit about this piece, anything immediate you would like us to highlight about this image?
Stanley Donwood:  This print is taken from a painting I made in the autumn of 2006, while I was staying at a derelict mansion in a forest. I painted on the terrace at the back of the house, overlooking a disused swimming pool filled with green water in which floated a dead deer. I started off painting a relatively realistic picture, but things changed.

1x: Was this image part of a recent theme, series or show that you had?
Donwood:  Yes, it was – at the time I was trying to capture something visual that would encapsulate the music that Radiohead were recording at the time, music that eventually became In Rainbows. I had a few ideas that weren’t right, but I liked them enough to think that they had a sort of value and that I could continue with them. This painting was part of an exhibition I had called “If You Lived Here You’d Be Home By Now.” It was composed of paintings, prospective drawings and large scale copperplate etchings.

1x: When was this piece created and what materials were used?
Donwood: The painting was made using acrylics on canvas. There was a little bit of spray paint in there too. And some textured ceiling finish.  Autumn of 2006. I remember because there was a deer park nearby and it was rutting season. Rutting stags make a really weird noise.

1x: Tell us how the idea and execution came about for this image?
Donwood:   I’d read a number of very depressing books about the inevitable collapse of our civilisation and I was trying to make pictures that represented huge shopping malls, endless car parks, interminable housing tracts, degraded landscapes and so on. At the time Radiohead were working on a track called Down Is The New Up, and as a consequence I made a sort of house-emblem consisting of two arrows – down and up – and was using it extensively. The running figure in the painting is (I think) from an American road sign. Road signage was a form I copied from widely. This painting was one of the more humane images I made during that period.

1x: How long did this image take to create from start to finish?
Donwood:  I don’t remember.

1x: What is unique about this piece compared with your other work?
Donwood:  I like to think that all of my paintings are unique, but perhaps I’m wrong.

Detail of Silver Leaf Embellishments on Run by Stanley Donwood

1x: Why should people buy this one of these prints?
Donwood:   I suppose if they like the idea of having a picture that shows a schematic child fleeing from a strange emblematic structure in a blank wasteland overshadowed by a darkly brooding forest below a tortured sky then this would be ideal. Otherwise, I really couldn’t say. 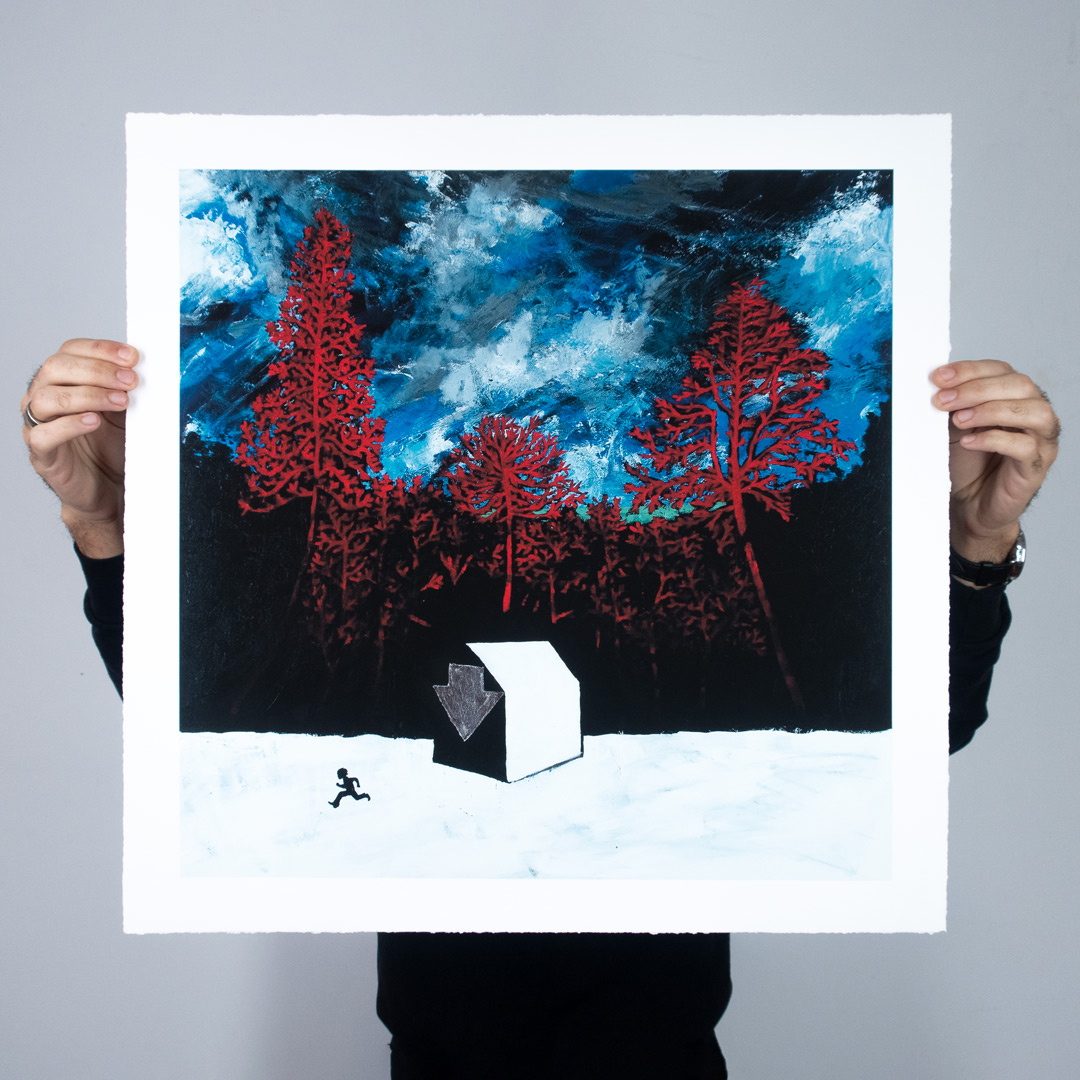 Run by Stanley Donwood. Sold out. 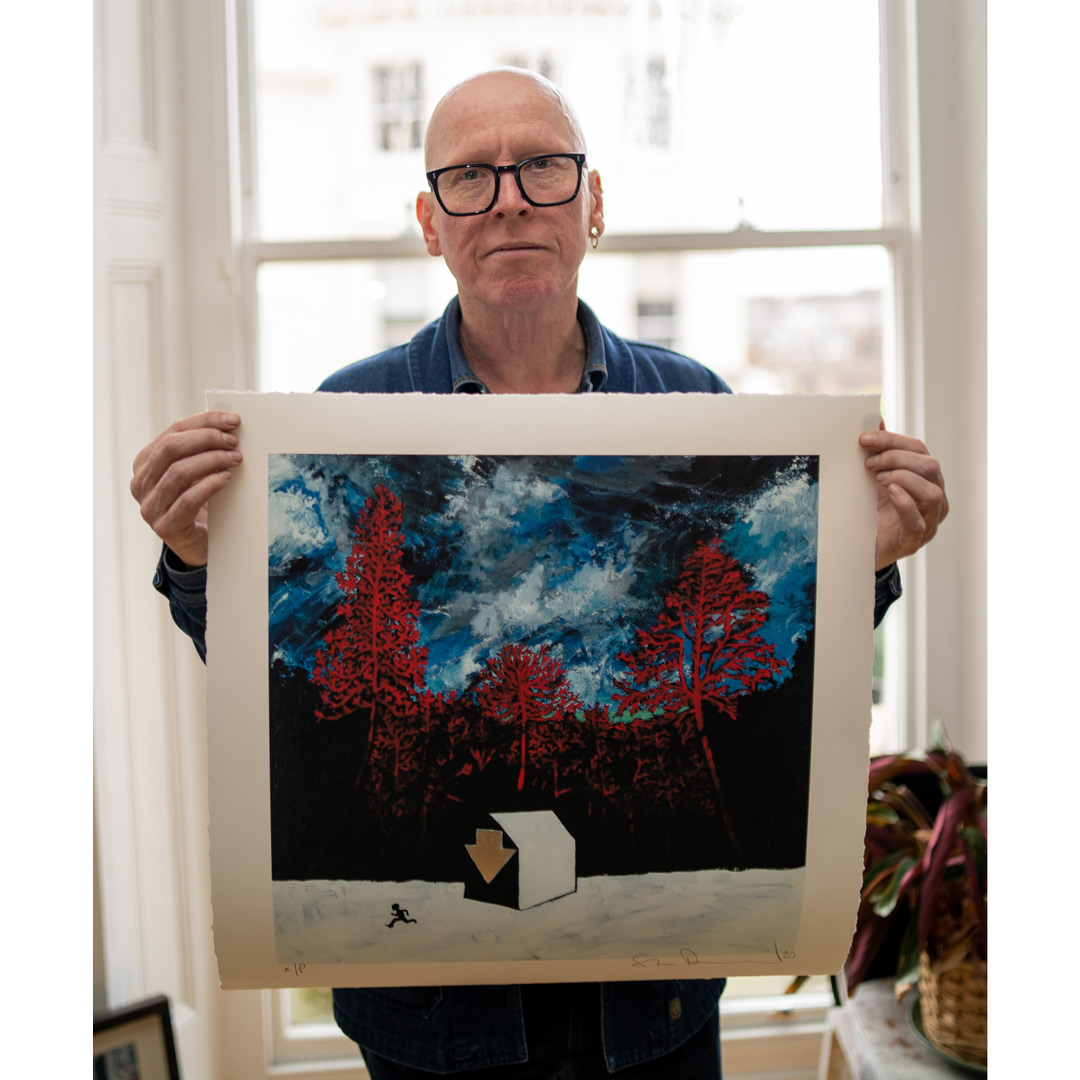 1x: What artists inspired you early on?  What artists inspire you now?
Donwood:   Peter Kennard, Gee Vaucher, Raymond Briggs, Gilbert Shelton. Now there are too many to name; since the internet and more precisely smartphones and social media made images so ubiquitous I have trouble remembering artist’s names, whether they are creating music, visual art, movies or whatever. But to be truthful I’m less inspired by other artists than by the world in general.

1x: Do you listen to music while you work? If so what? If not then what is your environment like when you work?
Donwood:  I used to, but I’ve recently moved studio and I haven’t got around to setting up a stereo yet, so for now it’s silence apart from me talking (and mostly swearing) to myself.

1x: If you could collaborate with any living artist who would it be and why?  Any deceased artists?
Donwood:  I already collaborate with other artists, so… I would absolutely not ever work with the undead. Or ghosts. Or zombies. Or any kind of corpse.

1x: What was the first piece of art that you bought? Do you still have it? The last?
Donwood:  It was a record called Replicas by Tubeway Army, and no, I sold it when I was very poor. The last was a photograph called La Tristesse Durera by Carolyn Bunt. 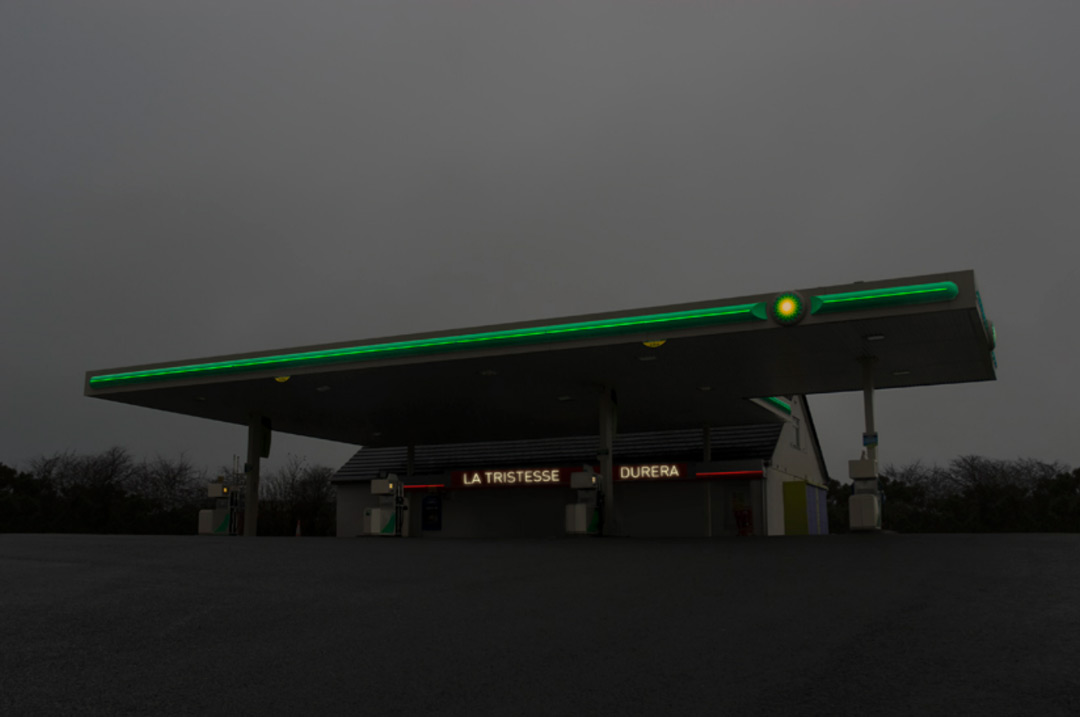 1x: Any big shows or events coming up that you’d like to share?
Donwood:  I have a show of all 80 of the linocuts I made for my forthcoming book Bad Island, at The Residency in London. It opens on the 20th February and runs for a couple of weeks. The book is published the week before, on the 13th but it might be a different date in the US. 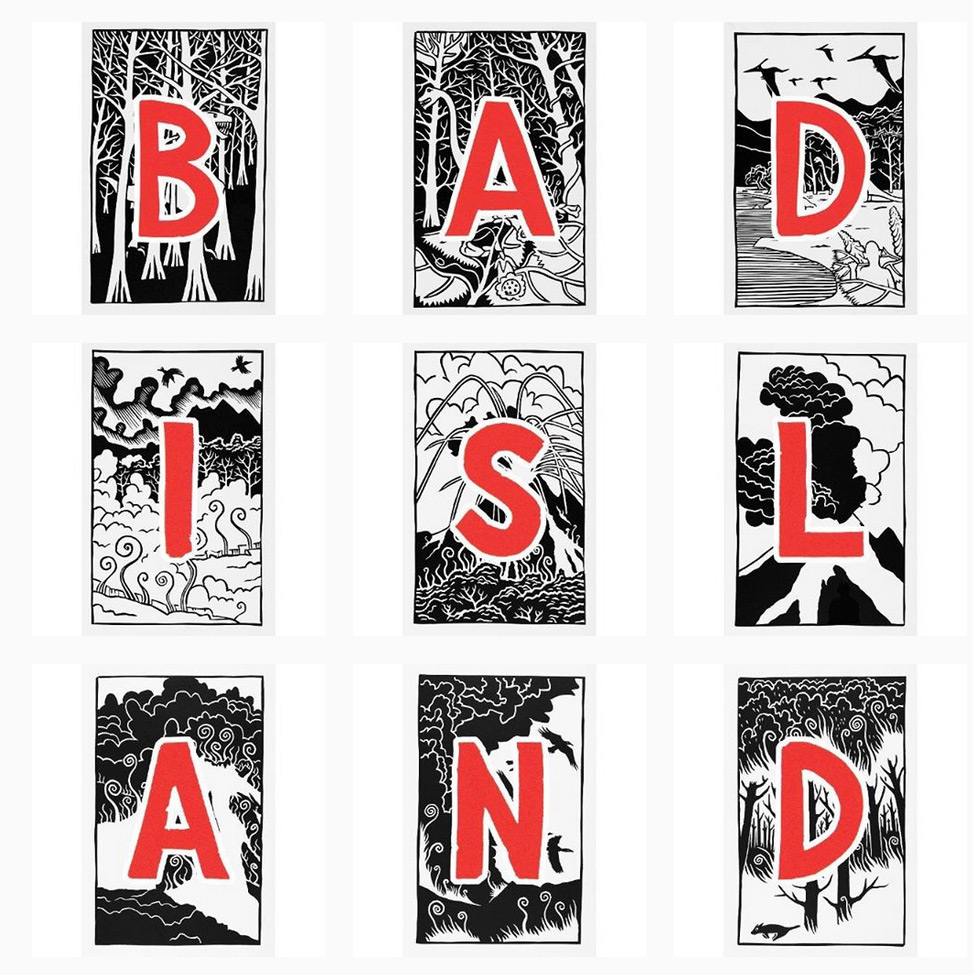