Denver-based artist Ravi Zupa returns with his latest edition Mystery, Babylon The Great as part of the 1xRUN x Juxtapoz Clubhouse Print Suite. For his latest screen print, Zupa turns his focus to the Book of Revelation and the tale of the whore of Babylon. Approriated for our modern times Zupa’s hand drawn iconography is meant for a positive call to action and optimism, although that may not come. Read on as we caught up with Ravi Zupa and he discusses his latest exhibition, a collaborative pritn with Shepard Fairey, his latest print release and much more. . . 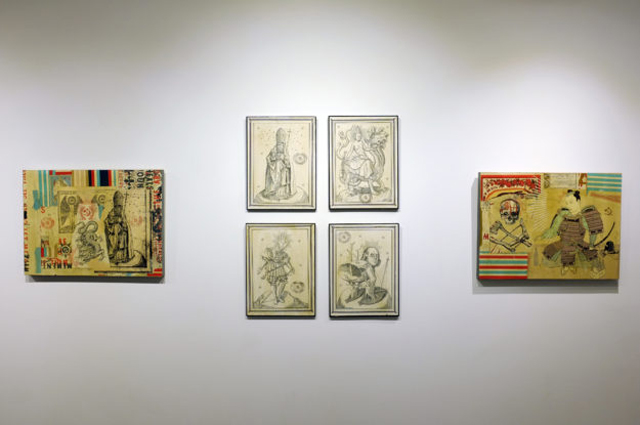 1x: Tell us a little bit about this piece, anything immediate you would like us to highlight about this image?
Ravi Zupa: The image has as it’s subject the “Whore of Babylon,” who is a compelling character. She appears in the book of Revelation and her description is sort of mysterious. It describes her as covered in jewelry and riches riding a 7-headed monster and carrying a golden cup filled with “abominations and filthiness.” Like everything in the Book Of Revelation it’s ambiguous and has a dreamlike quality. It isn’t clear if she is meant to be a literal person or a debauched city somewhere. People throughout history who love to imagine that they are living in the end of days have tried to contemporise her, to imagine her as a prophetic vision of their own times, always finding her to represent their specific enemies. Nowadays many Protestants think it represents the Catholic Church, others say it’s Islam or the United States and so on. Obviously it doesn’t actually represent a literal body of any kind, but is rather a symbol of what happens when human beings get carried away with excess. The harmfulness of indulgence and apathy. 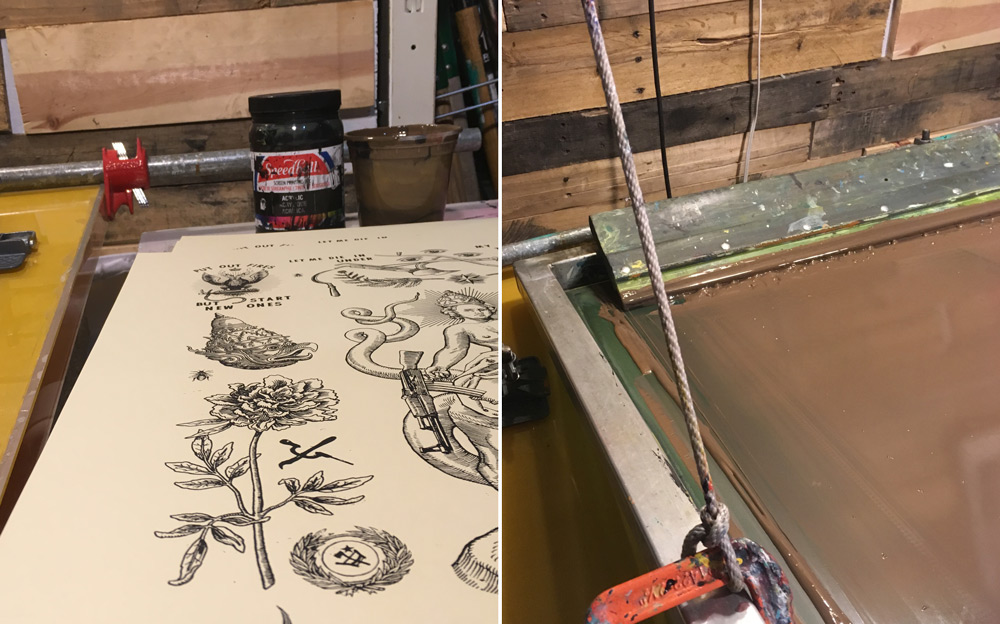 1x: Was this piece part of a recent theme, series or show that you had? If so how did it fit into that given grouping?
Zupa: The image at the center of this poster is a piece that is currently hanging in my “Violence On Our Behalf” exhibition at Matthew Namour Gallery in Montreal. Part of a continuing series called “The Age Of Enlightenment.” The whole show was created during the lead up to the presidential election and opened two days after the election was held. The show deals with power and powerful people. 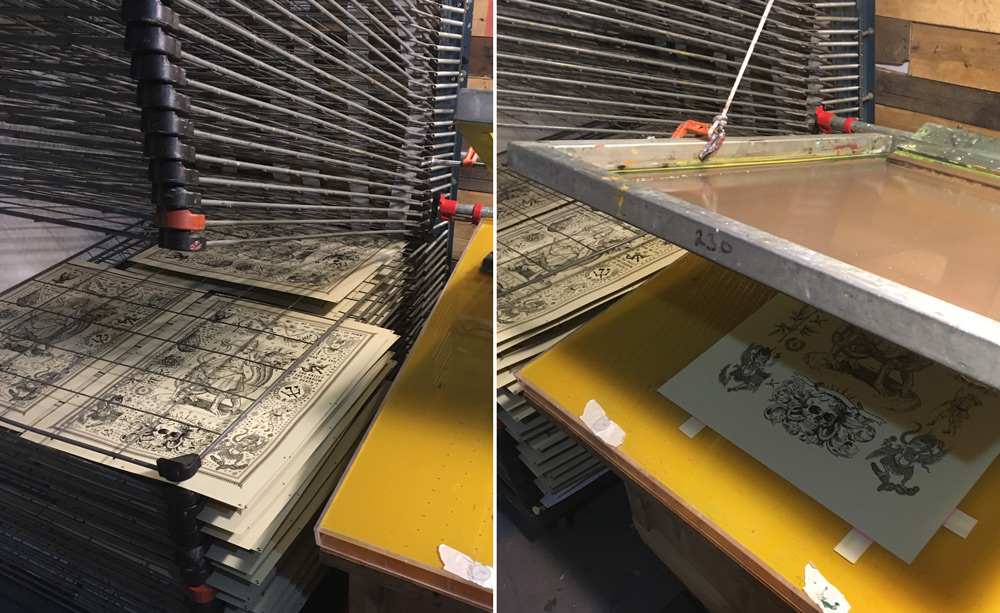 1x: What materials were used to create the original, as well as these prints?
Zupa: The original “Whore Of Babylon” piece is a drawing with pen and ink on paper mounted to wood. The poster is a two color screen print.

1x: When was this piece created?
Zupa: The central image was drawn two months ago. The surrounding images were made at different times. During the summer I released a pair of prints with Gallery Fifty24MX. They depict the eagle from the United States seal and the eagle from the Mexican flag both replaced by the Hindu eagle god Garuda. I’ve included these two images largely because the rhetoric of this election had so much to do with Mexico. 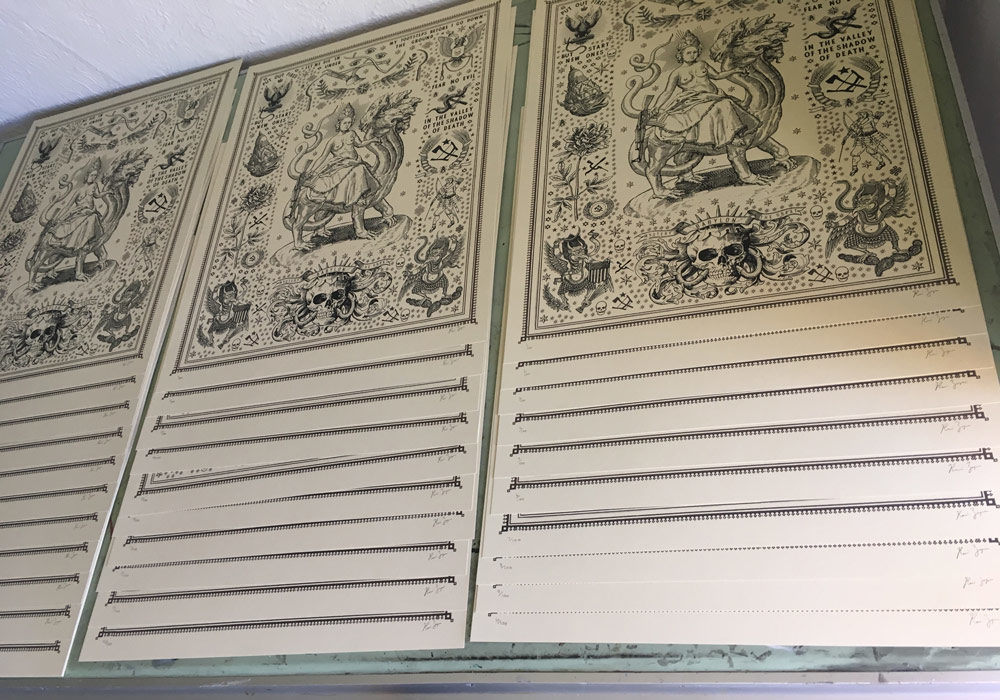 1x: Tell us how the idea and execution came about for this image?
Zupa: A large part art of the motivation for this piece came from the election. There is such a dire sense of cataclysm when people talked about the candidate that they opposed, which is a serious kind of problem. Republicans talked about Hillary Clinton as if she would bring the end of humanity and Democrats still refer to Trump that way. And although the main subject of the piece is meant to be a symbol of the arrival of the apocalypse, my intention is to call for optimism. That’s not to say I think everything will carry on as usual. We might be in for some very serious trouble. Especially since Trump has the same dumbness and childish, insecure, naivety that Harry Truman had. In that spirit the words across the top of the poster are lifted from a Bob Dylan song which he wrote when he learned that Americans were starting to build underground bunkers as preparation for nuclear conflict. He wanted to proclaim that it’s better to die while engaging with one’s own life rather than living with such abysmal fixations. I agree with him. 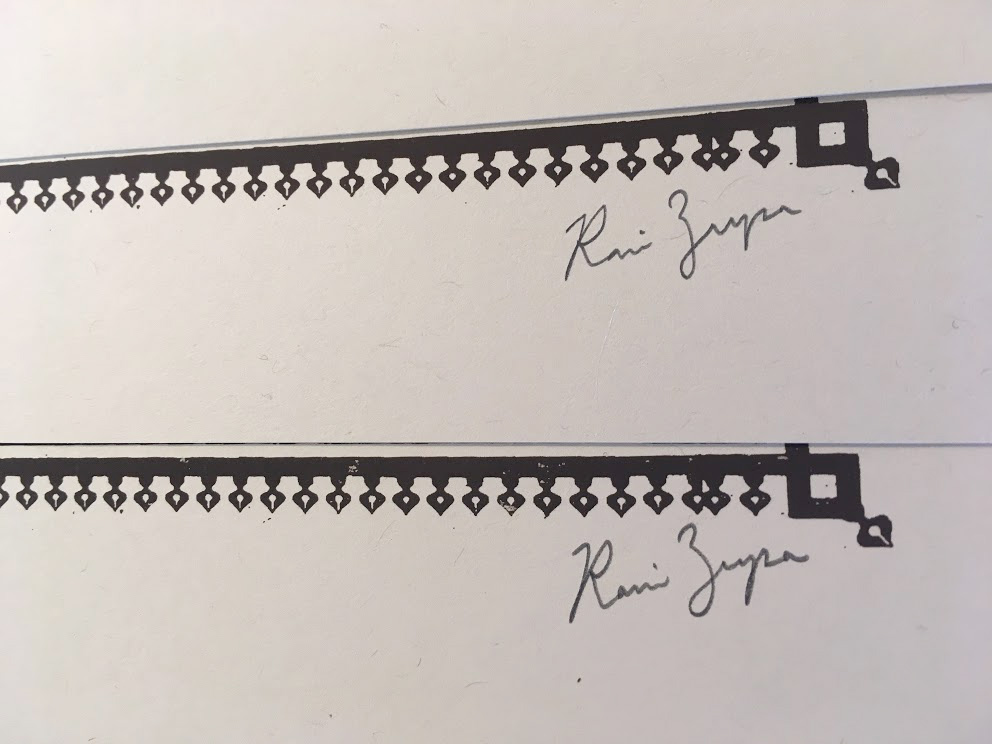 As for execution, I look at paintings and prints of the character, read the original text, read about interpretations and then draw a sketch of the image in pencil. Then I sit with a book of Albrecht Durer open. I don’t necessarily need images similar to the one I’m drawing I just need to see how he cut lines and how he made a variety of decisions. Some things are harder than others because objects that didn’t exist in his time period are more puzzling. In cases like this it means a lot of searching and improvisation to determine how he might have rendered these objects.

1x: How long did this piece take to create from start to finish?
Zupa: The central key image took two days of full attention. Designing the print took another two days. 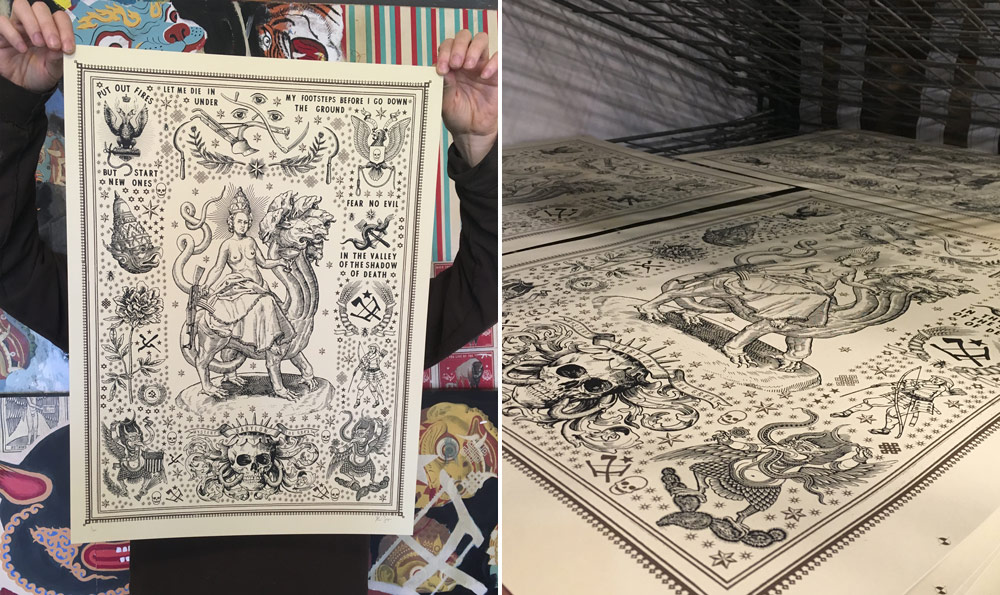 1x: What do you feel is unique about this image compared with your other work?
Zupa: The drawing of the central subject is done in the style of Albrecht Durer and is very much like the images of that character from the renaissance. In fact the Ak-47 is really the only deviation. I’ve been doing these tattoo style pieces recently. Inspired by both western tattoos and by the sak yant style from southeast Asia. They let me combine all kinds of images and weave them together to create rich new layouts. This is the first time I’ve given a lot of real estate to one central image that is meant to dominate the poster. The other images are loosely connected to it and the theme can be found in the relationship between all of them. 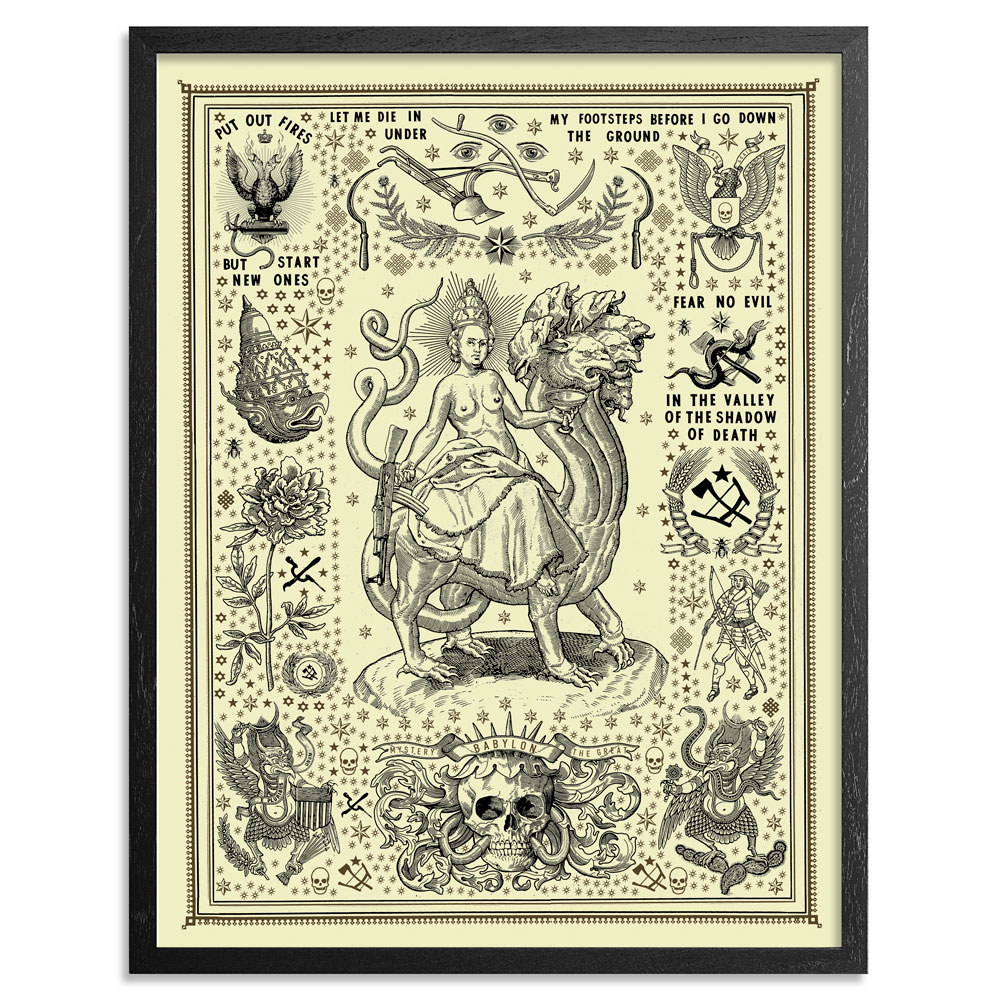 Mystery, Babylon The Great by Ravi Zupa – Click To Purchase

1x: We’re releasing this edition during this year’s Art Basel Miami, when was the first year you headed out to Miami?
Zupa: 2013 and I’ve returned every year since.

1x: What have your experiences been like so far?
Zupa: Miami is by far the most aggressive city I have ever been to in the US. Granted, I’ve only been here for Art Week so I’m sure that changes the tone to some degree. I spend a lot of time with strangers, often homeless people in Denver and other cities, but in Miami there is a certain psychological aggression from everyone that leaves me wanting to stay alert and respectful and watchful of others. I’ve never been to Detroit, but I’m guessing you guys also have to be alert and respectful there. Being a dumbass is perhaps more dangerous here than many places. One year I was walking around at night without shoes and a guy threatened to fight me because of it. Even the wildlife is this way. If you eat a sandwich on the beach, the seagulls surround you and scream bloody murder, ready to fuck you up for it. All of that said, it is really great. I like people that are like this. A lot of the art at the various fairs doesn’t light me up too much, but the sheer volume of it is so tremendous that you can’t help but find a lot of stuff that really does move you.

1x: What are some of your favorite aspects about heading to Miami each December?

Zupa: It’s so beautiful. And coming from Denver it’s always amazing to be in such lovely weather. Lots of really good cheap food. Seeing friends, gallerists and other artists from around the country. Debauched madness and abandon. There are usually great rap acts happening around too. I saw Kendrick Lamar one year which was wonderful.

1x: It’s been a bit since our last release with you, how has this year been for you?
Zupa: It feels like it’s been a really long year. I’ve been extremely busy which is always satisfying. Several great shows. Hashimoto which was my first show in San Francisco; Montreal; a couple poster releases including one with Shepard Fairey where I remixed one of his posters. I was really proud of how that image ended up. I’ve also started several new projects that I’m so excited about, but keeping quiet for now.

1x: What other activation or events will you have while you’re down in Miami?
Zupa: Black Book Gallery is showing some of my work in the Context fair. A handful of new typewriter guns from the “Mightier Than” series. Aside from that I mean to improvise. I want to swim in the ocean a lot.

1x: Any big shows or events coming up that you’d like to share?
Zupa: As I said, I have a lot of new projects that I’m extremely excited about. For the most part I don’t want to talk about them too much yet. I’m doing a project with Fifty24MX in a few months and have a book inspired by tattoo art on the horizon. Stay tuned!