Returning with his latest addition to his ongoing Bird Pot series, Denver-based artist Ravi Zupa brings us his latest edition Bird Pots Helping Us Understand The News as part of our Art Basel Miami 2017 Featured Releases. Part of Zupa’s continuing Wednesday Release Project, the latest “Bird Pot” features a sly recap of the series to date, with prints scattered across the floor falling from a vintage printing press. Read on as Ravi Zupa gives us the story behind his latest release and more below. . .

1xRun: Tell us a little bit about this piece, anything immediate you would like us to highlight about this image?
Ravi Zupa: This is a companion piece to my weekly Wednesday Release Project. I make a new original drawing every week based on something interesting that’s happening in the news and sell it for $100.00. It’s part of the “Age of Enlightenment” series that I have been developing and adding to for several years. All original, ink drawings are done in the style of medieval and renaissance woodblocks inspired by artists like Albrecht Dürer and Hans Holbein.

1x: Was this image part of a recent theme, series or show that you had?
Zupa: Each Wednesday at noon MT time, I release a new unique original drawing that highlights something going on in the news. It is almost always a Bird Pot Creature, which is something that I developed, inspired by the work of Hieronymus Bosch and Pieter Bruegel. There is one exception when after the shooting in Las Vegas, I drew a skull with crossed rifles and paired the image with De La Soul lyrics “Gun control means using both hands in our land.” 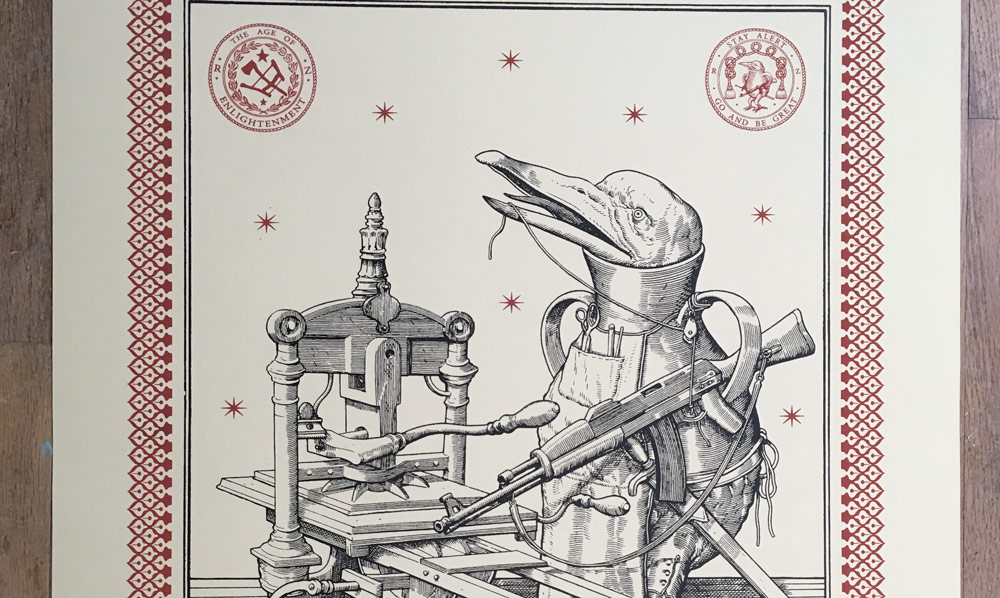 1x: When was this piece created and what materials were used?
Zupa: This was created in the last week with India ink on paper.

1x: Tell us how the idea and execution came about for this image?
Zupa: Because the project has to do with news and current events and immediately relevant issues, I chose a Bird Pot Creature with an early printing press, on the floor of his shop, is strewn about, pieces of paper with all of the different drawings that I have so far drawn and released on Wednesdays. One deals with sexual harassment, one is about the North Korean threat, one is about kneeling NFL players and so on. 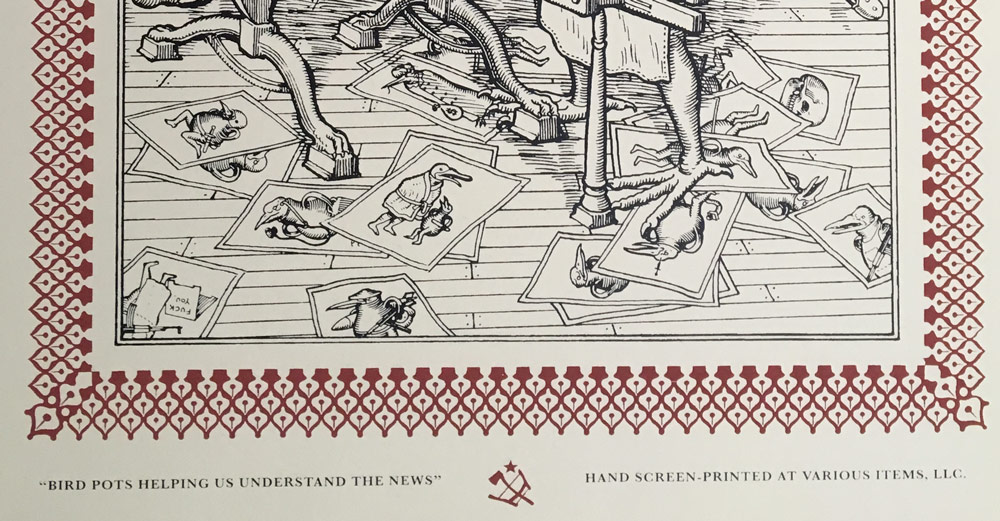 1x: How long did this image take to create from start to finish?
Zupa: The first drawing took me about two full days. Then we made the image larger and converted it into a 2-color screen print at a larger size. My wife Arna Miller is an extremely skilled screen printer, so we always do our own printing and after we made the proof for the poster I knew immediately that it was no good (the photos with the words “First Proof” written on it). It works great as a small piece at the original scale (the original piece available here) but when I made it larger it was worthless. So I immediately started redoing the whole poster, drawing it at the final 18 x 24 size so the line weight was right. That took me another 2 days and forced me to push back the shipping of these prints just a bit. 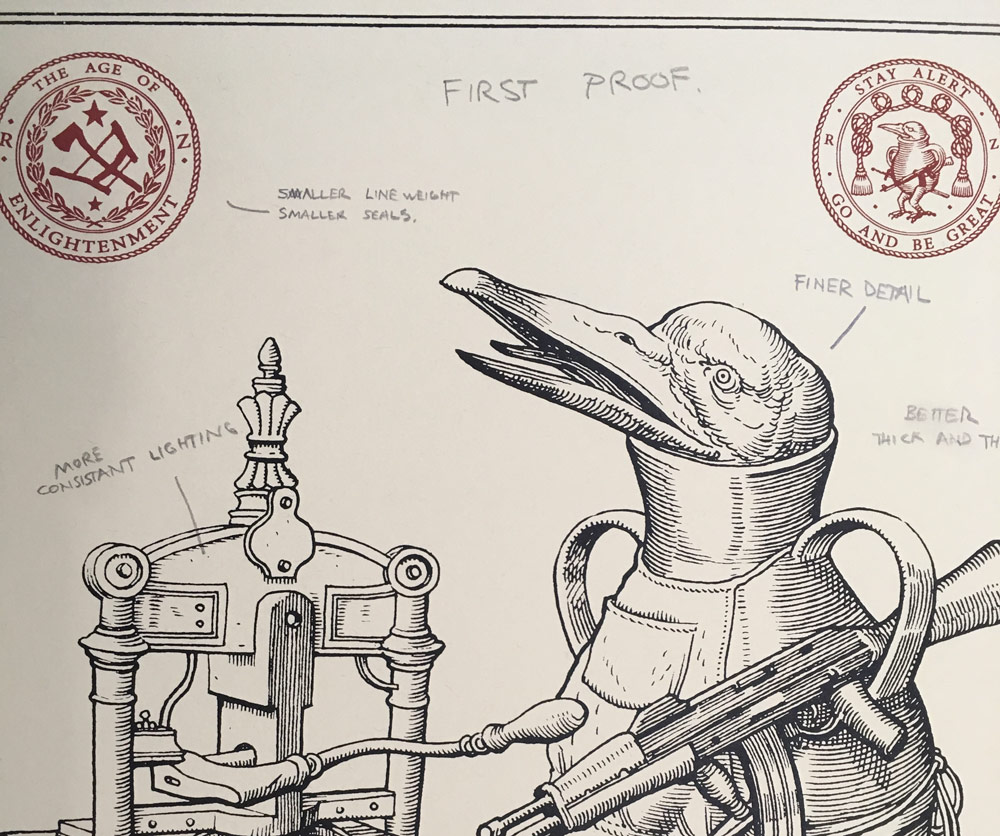 Bird Pots Helping Us Understand The News by Ravi Zupa

1x: What is unique about this piece compared with your other work?
Zupa: On the floor is featured every piece that is so far part of the Wednesday Release series.

1x: Why should people buy this one of these prints?
Zupa: The Wednesday release has been very successful and each new original drawing has sold within the first 3 minutes of posting. I’m excited to be making this poster available for those people who have been trying to get a piece but have so far missed it. They can now have a high quality, affordable screen print from the same series. 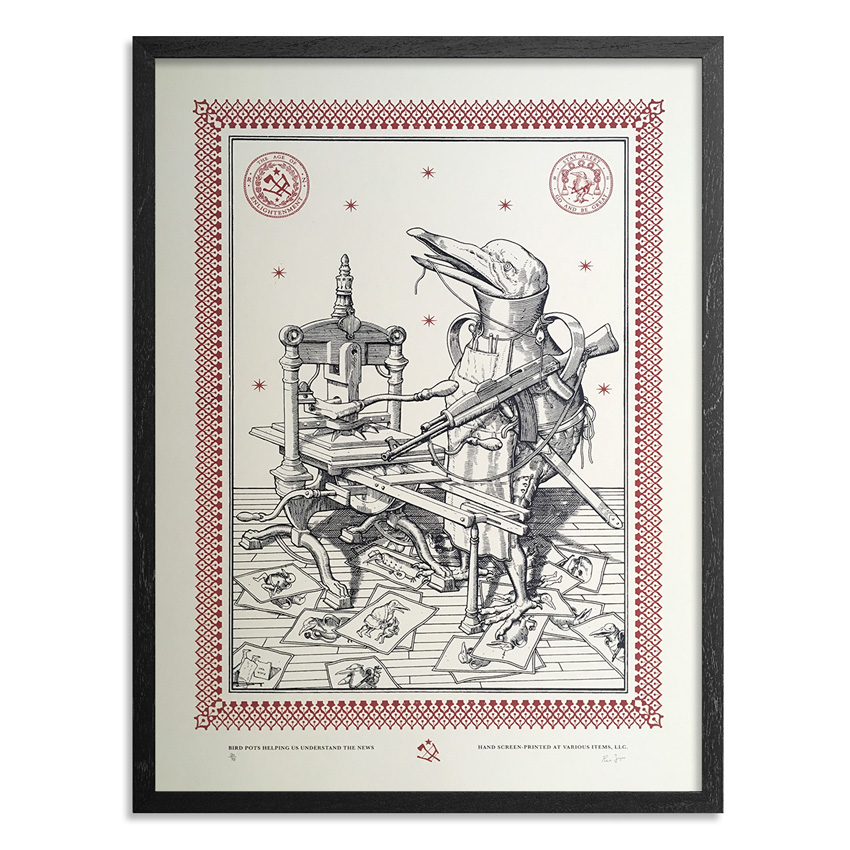 1x: What have you been up to over the last few months? Bring us up to speed on how 2017 went for you?
Zupa: 2017 was a pivotal year for me. My wife Arna Miller and I incorporated as Various Items, LLC. (she is also an artist). We bought a three floor house in Commerce City, Colorado which is the northern industrial section of Denver. We’ve designated a modest bedroom and Kitchen as our living space and the remainder of the giant house is a series of rooms set up to specific art making needs. A drawing room, production room, wood shop, ceramics, welding and metal, Screen printing, block printing and so on. We also took on a business partner named Naia who is sharp, creative and resourceful and as a result things are moving quickly and the quality of my work has increased hugely. The previous owner of the house also had ducks and left them so we have 5 ducks and goose now. They’re 100 percent funny.

1x: Any recent shows or exhibitions that you had?
Zupa: I had a great solo show in Mexico City, some group shows and fairs in San Francisco and LA and I released a series of T-shirts and a letter press print with Shepard Fairey and Obey Clothing. Most recently I completed a Solo show at Black Book Gallery that I was very proud of. This show was cohesive and careful and it was an unbelievable success. 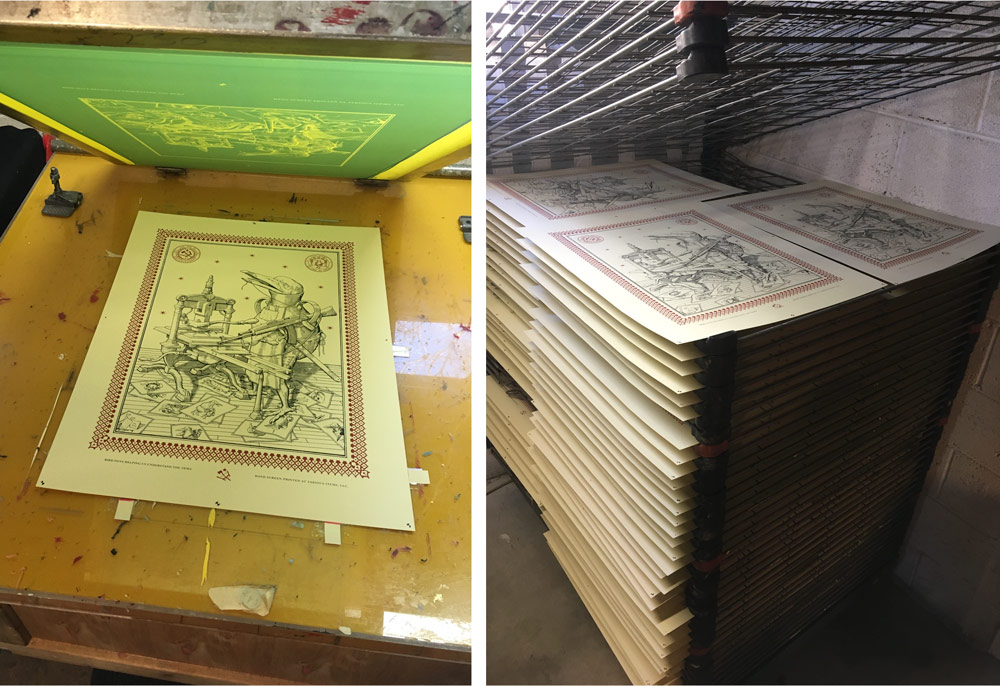 1x: What are some of the ways you have been trying to push yourself with your work over the last year? What are some strides you feel you’ve made in your work recently?
Zupa: As I said, This most recent show was very cohesive. In the past, I have always been proud of individual pieces but because I do so many styles and media and methods, my shows as a large body, sometimes lack a direction and aesthetic unity. This show on the other hand, had the variety that I love and was highly unified. I can’t wait to bring that cohesion and unification to my next shows.

1x: What was the last piece of art that you bought?
Zupa: I payed to stream the new 2017 “Twin Peaks” which was superb and exceedingly inspirational!

1x: Do you have any big shows or events coming up that you’d like to share?
Zupa: I have some “Mightier Than” work in Miami this week. That will be at the Black Book Gallery Booth in the Context Art Fair. This March, my wife and I will open our studio/house to people in Colorado and invite them to tour the work spaces and see screen and traffic cone, printing demonstrations. In the summer I have a solo show at Hashimoto and in the Fall I will be showing at the Fort Wayne Museum in Indiana. I’ll also continue the Wednesday releases for this project. I have some other projects on the horizon that I’m extremely excited about but not yet ready to comment on.