Artist Robbie Conal is never at a loss for words.  He and artist Shepard Fairey are long time friends and occasional collaborators, including creating 2004’s national anti-Bush street art campaign with Mear One, Be the Revolution. While both Conal and Fairey show their art in galleries and museums, they share a powerful bond: making art for the people, and getting it out on the streets. The two were even featured on an episode of The Simpsons together a few years back, continuing to solidify street art in popular culture.

Considered one “…of the country’s foremost satirical street artists” by The Washington Post he is known for his scathing oil portraits of politicians, bureaucrats, and corporate moguls, which he turns into street posters, and with help from his volunteer guerrilla army, then plasters them across the US. We welcome Robbie Conal for our first guest column as he weighs in on Fairey’s recent arrests in Detroit… 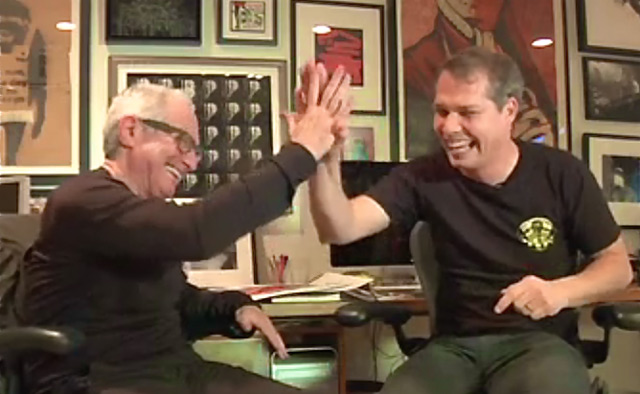 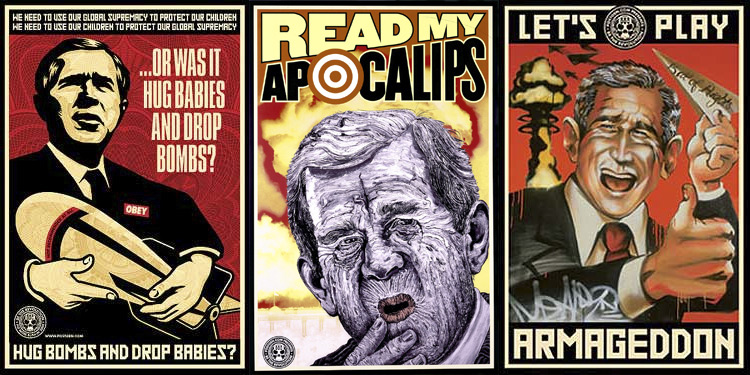 OF ALL PLACES: DETROIT ARRESTS SHEPARD FAIREY!
(That’s not even the bad news.)

The bad news about Detroit:
The city filed for municipal bankruptcy on July 18th, 2013. The U.S. bailout of General Motors and the Chrysler Corporation, both based in Detroit, ultimately cost U.S. taxpayers $9.26 BILLION. Detroit’s main railroad entry point, Michigan Central Station has become the poster child for “ruin porn” in the U.S. Downtown Detroit does a great impersonation of World War II Dresden. Oh, and then there’s Mayor Mike Duggan’s pronouncement, “I hate graffiti!” I’m not saying that’s stupid, but hate’s track record in human relations, much less city planning, hasn’t been exactly positive. To be fair (ha-hah!) to Mike: post- bankruptcy, he has been cornered by Detroit’s stalwart culture warriors into practicing a bit of ethical realpolitik.

(For the moment let’s just pretend that isn’t an oxymoron.) Which has somewhat mellowed his inflammatory rhetoric. 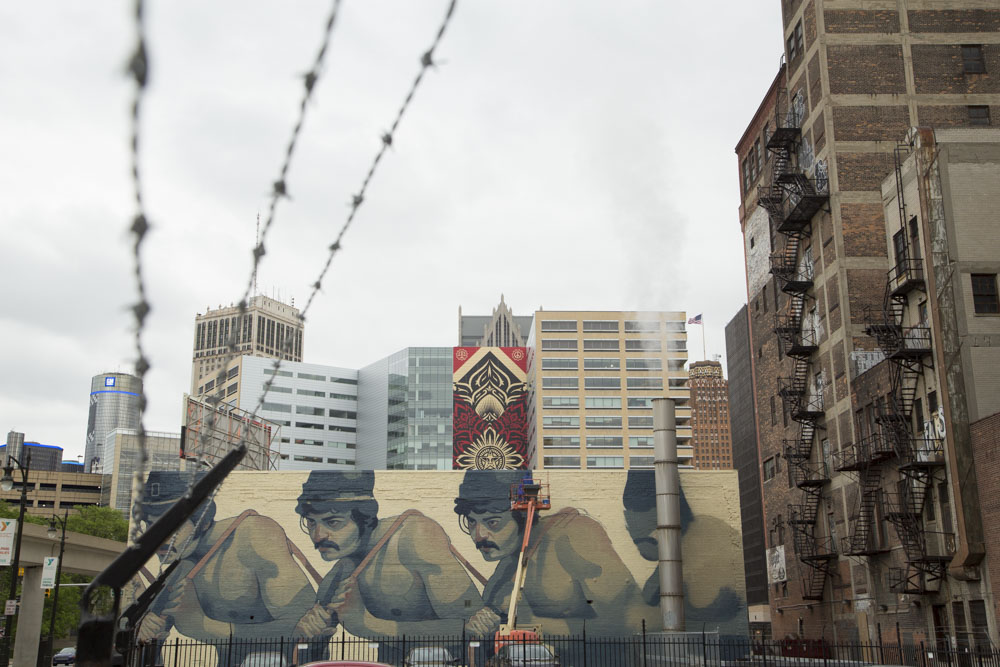 The good news about Detroit:
The bad news makes it an ideal place for young artists to flock to and thrive. They are doing both. For example: Two years ago a New York artist bought a 25,000 sq. ft warehouse and a 2,000 sq. ft. space in Detroit for a combined cost of under $8,000! A resourceful young (or old, well, especially young, considering the “sweat equity” involved) artist can make a lot of art in that much space for that little cabbage!

With the city going down and the young artists up and coming, one might think the Detroit Police Department could figure out how to keep itself busy protecting and serving whatever citizenry it has left without bashing its burgeoning, poppin’ fresh population of artists.

But, uh, not exactly. Detroit’s PD issued an arrest warrant for Shepard Fairey, charging him with fourteen illegal street posterings—graffiti related vandalism. On hearsay evidence, no less. It’s not like Detroit’s finest even caught him in the act—THEY DID NOT. They just KNOW he did it. Why? Cause it’s handsome, highly decorative art on city and private property? (Yes, made without the owners’ consent.)

Going after one of the most popular street artists in the world in one of the dingiest urban environments in America might even be in line with Detroit’s Mayor, Mike Duggan’s top priorities: discouraging spontaneous creativity and keeping the urban rubble “clean,” however depressingly ugly, a la Rudy Giuliani in New York. That’s just sad.

If Mayor Mike had any pop culture policy smarts at all, he’d take this unique opportunity to invite Mr. Fairey and many others to produce murals sponsored by the city, celebrating its unique ripeness for public creativity. The good people who stayed and believe in Detroit might even enjoy the positivity and be proud of all that. 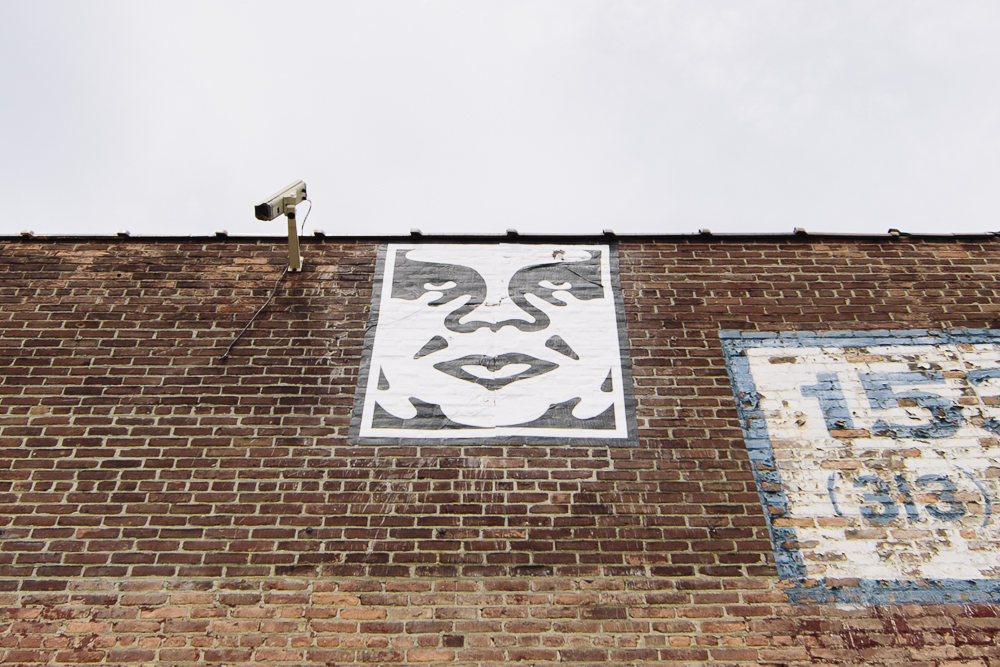 Just a thought:
Graffiti based street art has come a long way from “tagging.” It’s matured into a wild variety of stencils, posters, pasted cut-outs, collages and “pieces”—larger, more considered combinations of images and text addressing all manner of social issues. It’s even effloresced into multiple story sized, ecstatic “building decoration.” More than occasionally—inevitably—some of all this has crossed over into fine art gallery exhibitions. Though, as Shepard has said, “An artist can make both: street art and gallery art—but they are NOT the same!” And should not be misconstrued as such.

By way of pop cultural comparison, this also happens to be the growth arc of rap music as an art form. Starting from a rhymed pattern of vocal beats—musical ground zero—it has added instrumentation (there was nowhere else to go—ha!), melody, sampling and orchestration, electronic and/or otherwise. Giving birth to hip-hop (and all its progeny). Spectacular! 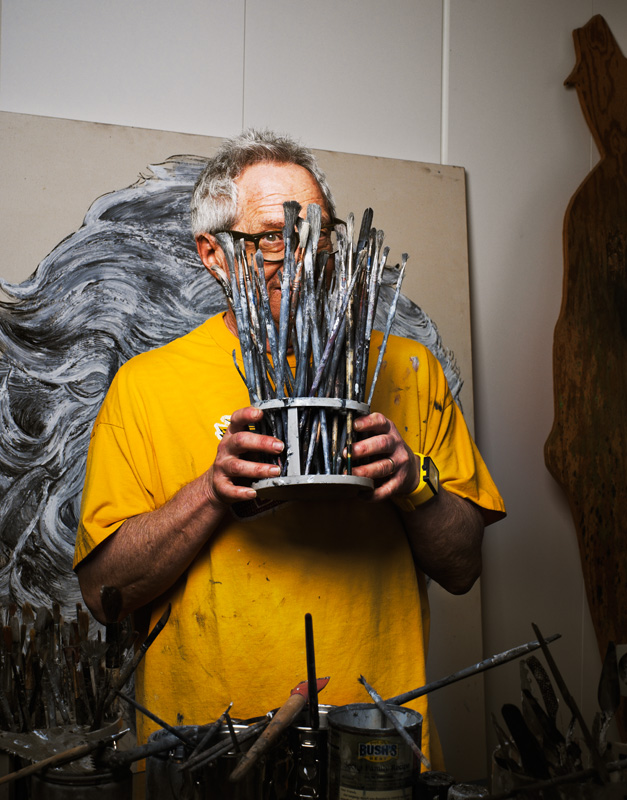 Words by Robbie Conal. Robbie Conal’s work has been featured on numerous major media outlets. His art has been collected by The Metropolitan Museum of Art in New York, LACMA, and The San Jose Museum of Art, among others. His most recent postering “art attack” is “FO$$IL FOOL,” an anti-Mitch McConell (R-Kentucky) portrait calling out the Senate Majority Leader, on his stance favoring fracking, and for encouraging other fossil fuel producing states to defy the federal EPA carbon emissions guidelines. For more information on Robbie, his street posters, other artwork, and upcoming exhibitions, please visit: robbieconal.com  and follow him @RobbieConal.

Portraits of Robbie Conal by Tim Hans – see more on his website.