Earlier this year, April 25th marked an anniversary that many Flint, Michigan residents would rather forget. Three years ago the city of Flint switched the city’s water supply from the Great Lakes Water Authority to the highly corrosive Flint River. Over the ensuing three years, Flint residents would stage protests and aim to expose politicians responsible for the disastrous switch over. Along with the help of protests from Flint residents and the work of veteran news reporters like the Michigan ACLU’s Curt Guyette the Flint Water crisis was brought into the national spotlight. Three years have passed and not much has changed, find out more about the Flint Water Crisis on the Michigan ACLU and on Detroit Metro Times.

For fourth release in the 1xRUN Flint Water Crisis Print Suite we are excited to welcome in Ron English who brings us his latest release Aqua Apes to again help raise awareness and donate a portion of the proceeds to the Michigan ACLU and the Flint Child Health & Development Fund. Read on as Ron English gives us a look into his process below, and watch the Michigan ACLU’s comprehensive documentary to find out more behind the Flint Water Crisis. To donate directly head to the Michigan ACLU here and The Flint Child Health & Development Fund of the Foundation of Flint here. Stay tuned as we are very excited to continue announce more artists who will be joining Ron English, alongside recent releases from Robbie Conal, Shepard Fairey, Brandon Boyd, as well as upcoming editions from Doze Green, Maya Hayuk and many more as part of this ongoing series…

1xRUN: Tell us a little bit about this piece, anything immediate you would like us to highlight about this imagery?
Ron English: It is titled Aqua Apes. How to draw a Seamonkey without getting sued.

1x: Was this image part of a recent theme, series or show that you have?
English: I made up a world called Delusionville that is populated by a hundred or so of my characters. This is a couple of Aquarium dwellers called The Aqua Apes.

1x: When was this piece created and what materials were used? How long did it take from start to finish?
English: I started the process by drawing the characters. The rest I did in photoshop. It was created a few months ago. I don’t really know. I don’t pay much attention to time. 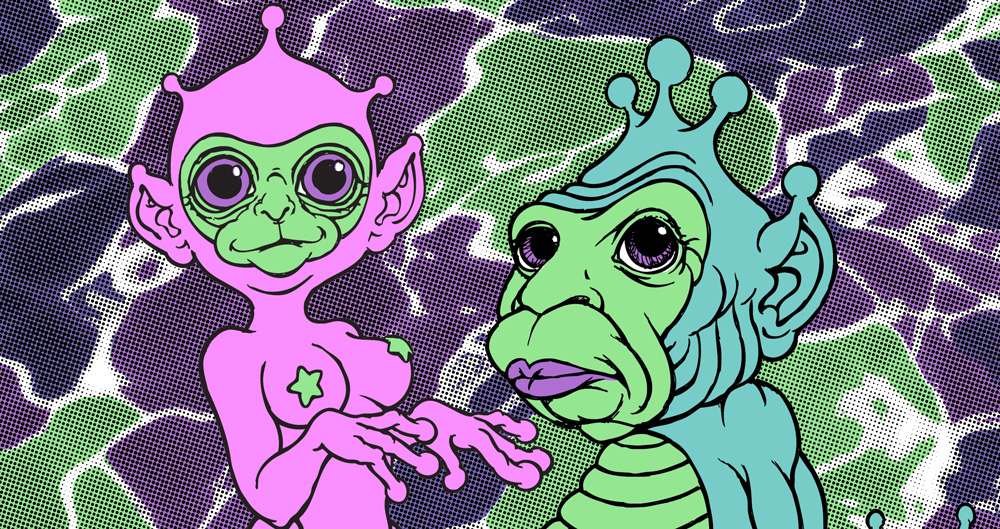 1x: What is unique about this piece compared with your other work?
English: Mostly that it introduces two new characters to the Ron English universe.

1x: Why should people buy this one of these prints?
English: They should buy it because it speaks to them, not because it will be worth a fortune later. 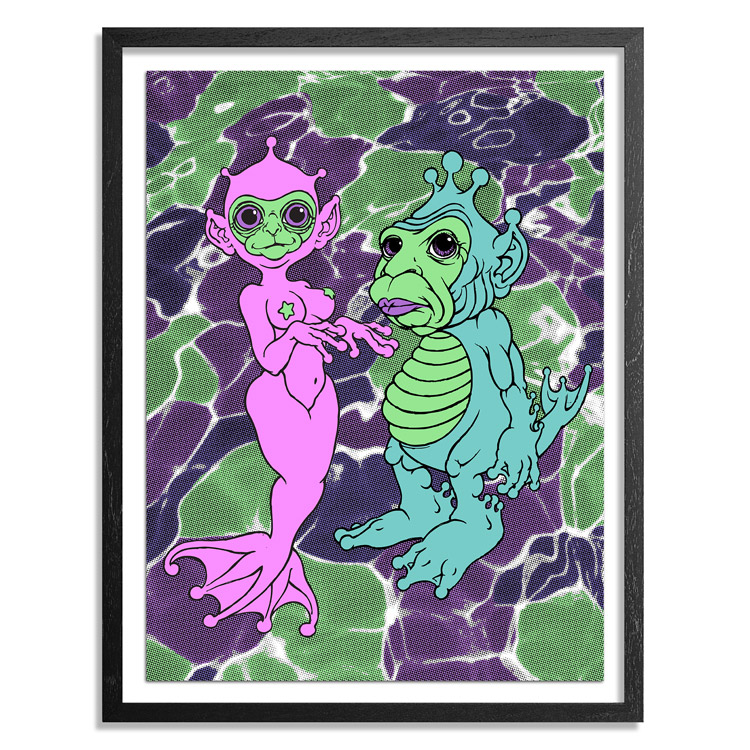 1x: You’ve spent some time here in Michigan, when did you first hear about what had happened up in Flint and what was your initial response?
English: We have major infrastructure problems in this country, so, sounds like a good time for some tax breaks for the wealthy.

1x: Some of your latest works like your recent Trunk The Orange Elephant and Donald T. Rich, have become more pointed at the current administration. Given the current state of affairs have you started to feel more/less a responsibility to use your platform as an artist to call attention or mock this current administration?
English: Make America draw again. My motto, not Trumps. I hate “great”. Sad.

1x: What was the last piece of art that you bought?
English: A Robert Chapman pastel.

1x: Any big shows or events coming up that you’d like to share?
English: December 2nd I’ll have a show in Los Angeles at Corey Helford!