Canadian artist Sarah Joncas returns as the nights start getting longer and we wave goodbye to Summer with her latest limited edition. Joncas has been with 1xRUN since RUN #00506 – Dirty Show which dropped back in July of 2013.  Most recently she joined Alex Garant and Oda King for a 3-person exhibition at Last Rites Gallery.  Read on to see a look at Joncas’ latest edition Summer and more…

1xRUN: Tell us a little bit about this piece, anything immediate you would like us to highlight?
Sarah Joncas: I made ‘Summer’ last year for the annual group exhibition Suggestivism, which was held at Copro Gallery. Without any themed restrictions, I was free to paint whatever I felt like making and because the seasons have always made (and continue to make) an impression on my work, the painting really was just about illustrating that. I wanted to depict a simple portrait of a modern girl under the influence of summer! It was fun, I usually focus on winter more than any other season, being Canadian.

1x: When was this piece drawn and created and what materials were used?
Joncas: This piece was drawn in the summer of 2014 using oil on canvas. 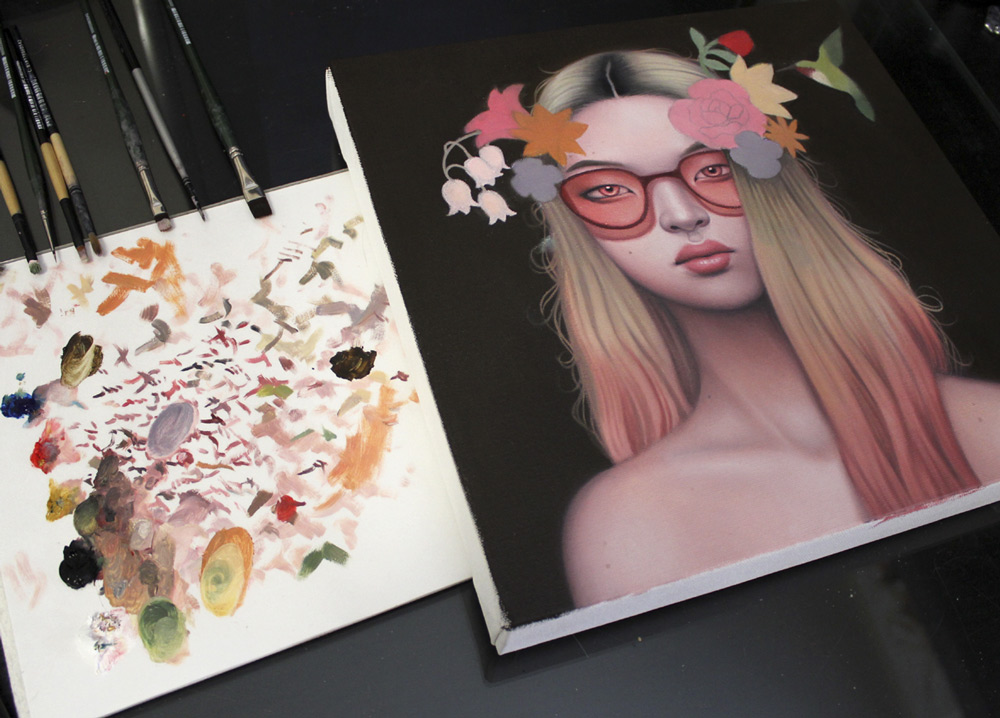 1x: Did this piece come from a larger series, if so how did this piece fit?
Joncas: No, this painting was on it’s own. I always enjoy the group shows I get involved with for that reason, actually. Sometimes it’s a pleasure to just paint whatever idea or image is coming to mind at that time, separated from a more conceptualized series. They’re less stressed.

1x: How long did this piece take?
Joncas: A couple months. 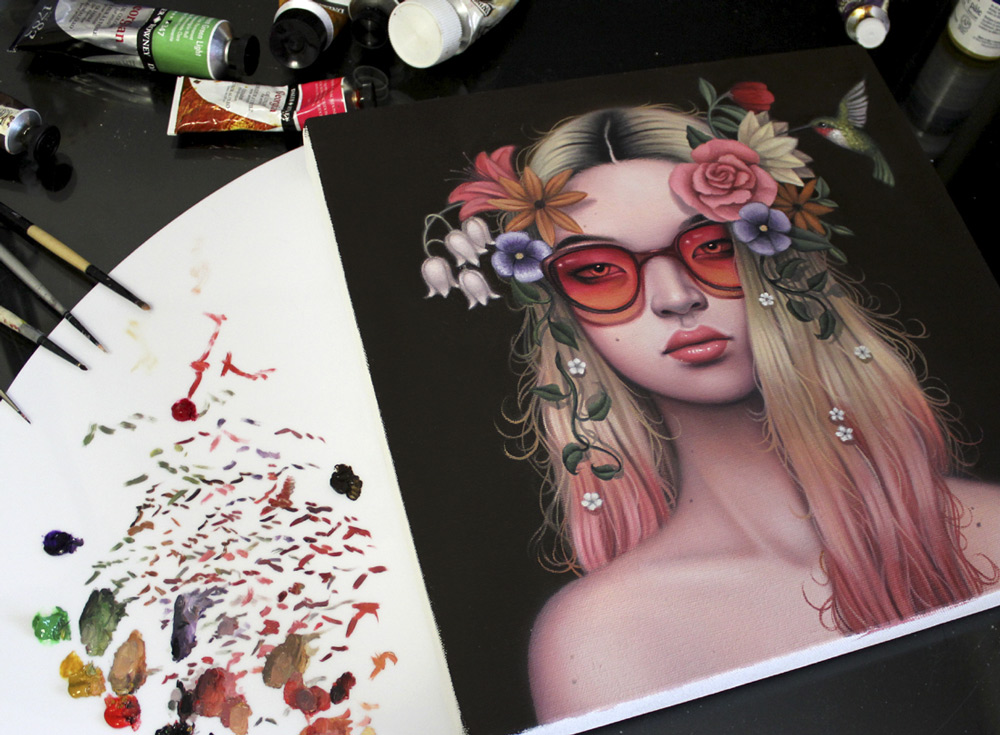 1x: What is unique about this piece compared with your other work?
Joncas: As it’s comes to my more recent work, this painting feels more cute to me than what I typically do. I often portray a darker side in my work, or at least a more serious tone, but this portrait was colorful and spunky.

1x: Why should people buy one of these prints?
Joncas: As I always say, if you like the image, it’s a good quality print at a very reasonable price! 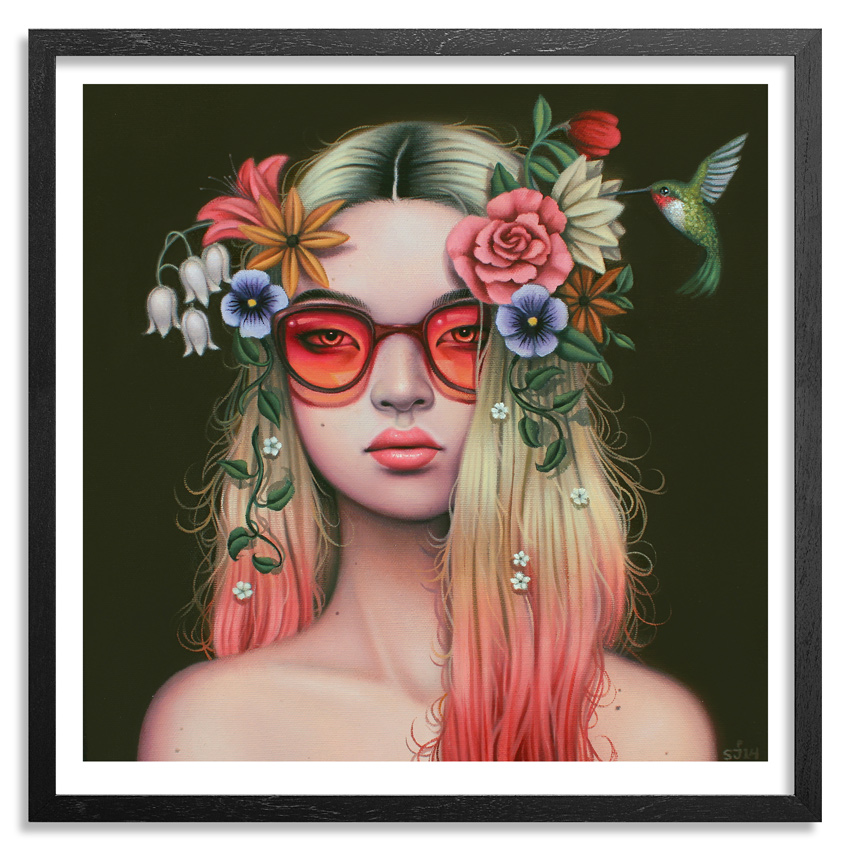 1x: You recently had an exhibition at Last Rite Gallery, will you give us the lowdown on what your most recent body of work was like?
Joncas: The work for that show wasn’t completely uniform in theme, but I did find there were certain imagery and ideas re-occurring in them. I was a inspired by Charles Burns after reading Black Hole this year and kept wanting to play with mutation as a theme. Being a Gothic gallery I went with it for this show! A few of the pieces had these parasitic-like growths forming from the characters, as though they were undergoing a bizarre kind of transformation. Others were of women with flowers and fungi branching from their clothing. This feeling like they we’re abstracting and being taken over by something mysterious. It was a lot of fun to indulge in that kind of creep. 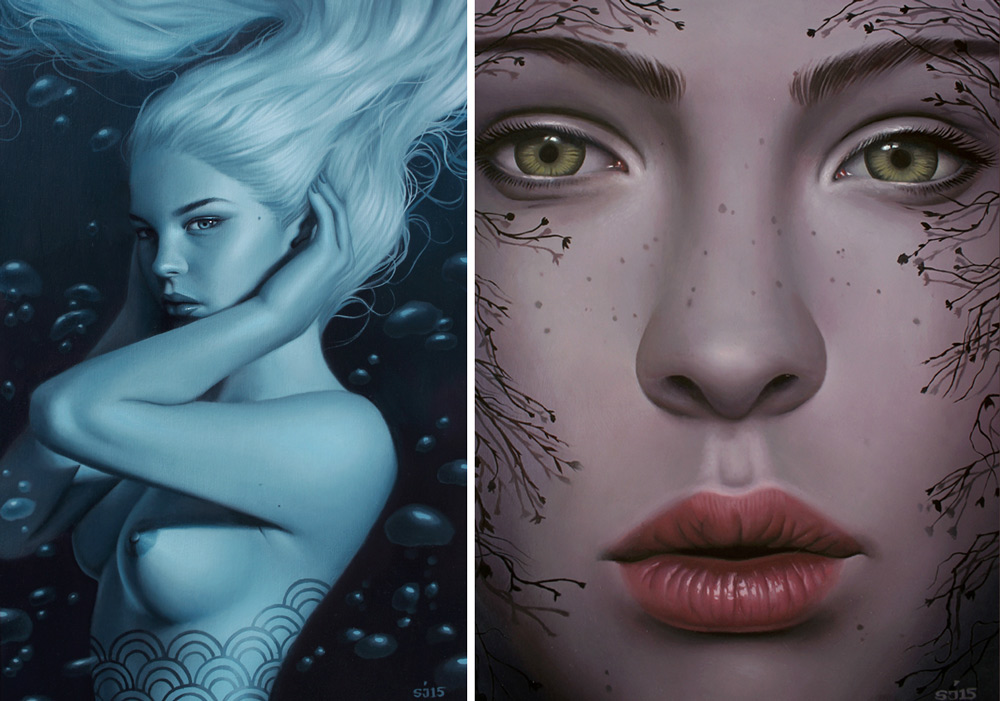 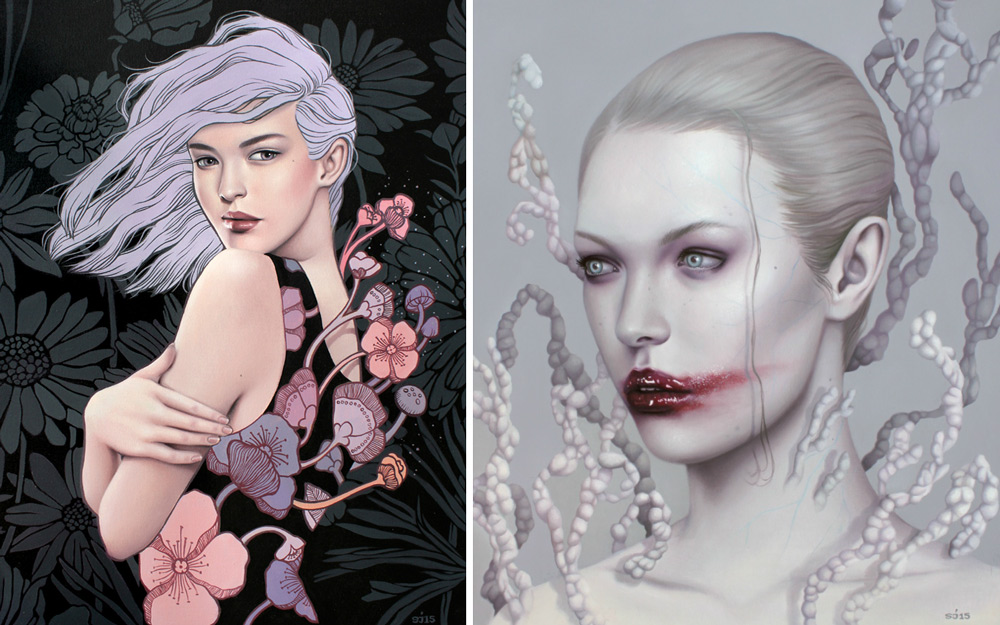 1x: What else have you been up to since our last release?
Joncas: I’m always painting away, commissions and shows upcoming. I currently have a work in the UK for a show at Stolen Space Gallery, which just opened on the 3rd. I’ll have a small painting in a show at the Auguste Clown Gallery in Australia this November, my 1st time showing there :)

Finished painting for ‘LAX/LHR’ opening this Thursday at @stolenspacegallery in the UK, curated by @thinkspace_art. “Overcast”, 12×12″, oil on board. If interested, email the Thinkspace Gallery about their preview! [email protected] #LAXLHR #thinkspacegallery #stolenspacegallery #sarahjoncas   A photo posted by Sarah Joncas (@sarah_joncas) on Aug 31, 2015 at 4:43pm PDT

1x: How is the rest of your year shaking out as summer turns into fall here?
Sarah Joncas: I’ll admit it’s been a bit of a rough summer this year, so I’m actually very looking forward to the coming Fall and Winter. I’m excited about a trip I’ll be doing to the Philippines in December! Will be my 1st time going abroad and I’ve always dreamed about seeing some of Asia.