Just in time for the holiday season, Los Angeles artist Scott Listfield unveils two new editions Rainbow One + Rainbow Two featuring his signature astronaut imagery. We caught up with Scott Listfield to get the story behind these images, that were created as he prepared for a solo exhibition in Texas. Pulling inspiration from the open fields of Texas, Listfield found himself drawn towards a guiding light, with each image mirroring in this symmetrical two print set. Read on as  Scott brings us up to speed on his latest book, upcoming plans for 2020 and lots more… 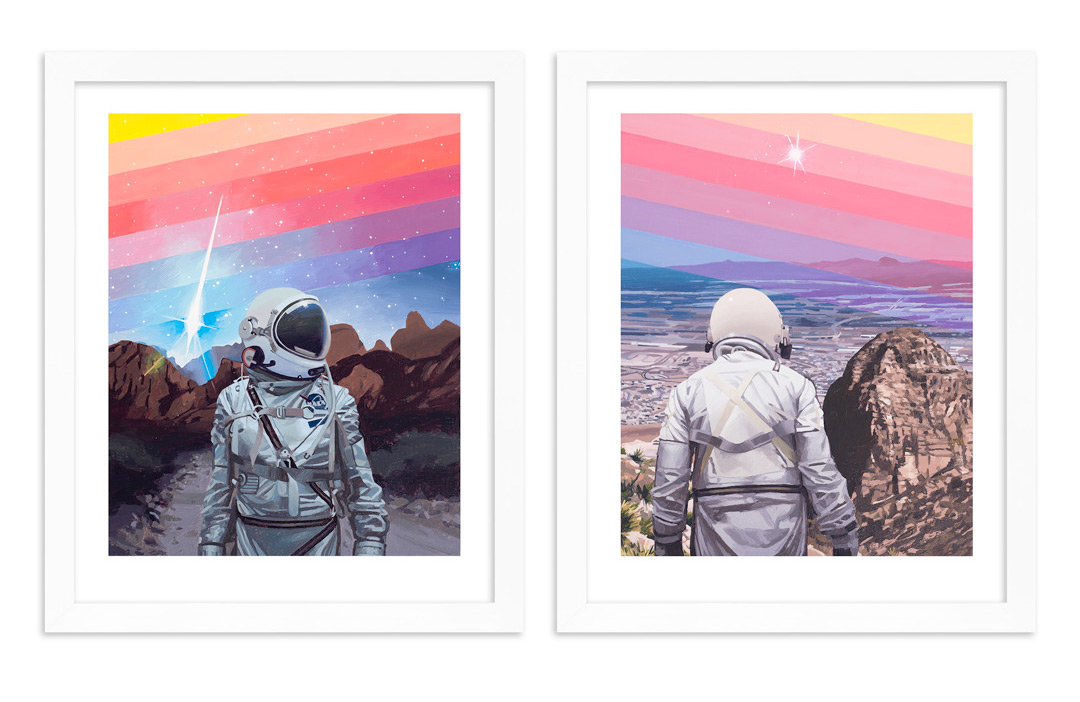 1xRUN: Tell us a little bit about these two paintings, are the originals still for sale?
Scott Listfield:  Nope! They have been sold.

1x: Were these two pieces part of a recent series, show or theme you have? if so how did they fit into the given grouping?
Listfield: I had a show last Spring at Preacher Gallery in Austin, Texas titled “Lone Star,” and I was thinking a lot about the Texas landscape, specifically the Big Bend area, and also had a recurring motif of a bright guiding star which appeared in a lot of the work. You know what they say, the stars at night, are big and bright.. you get it. That said, I didn’t want these two paintings to feel too specifically like any one geographical location. I wanted them to more broadly feel like you were following a star in the sky into an unknown landscape. 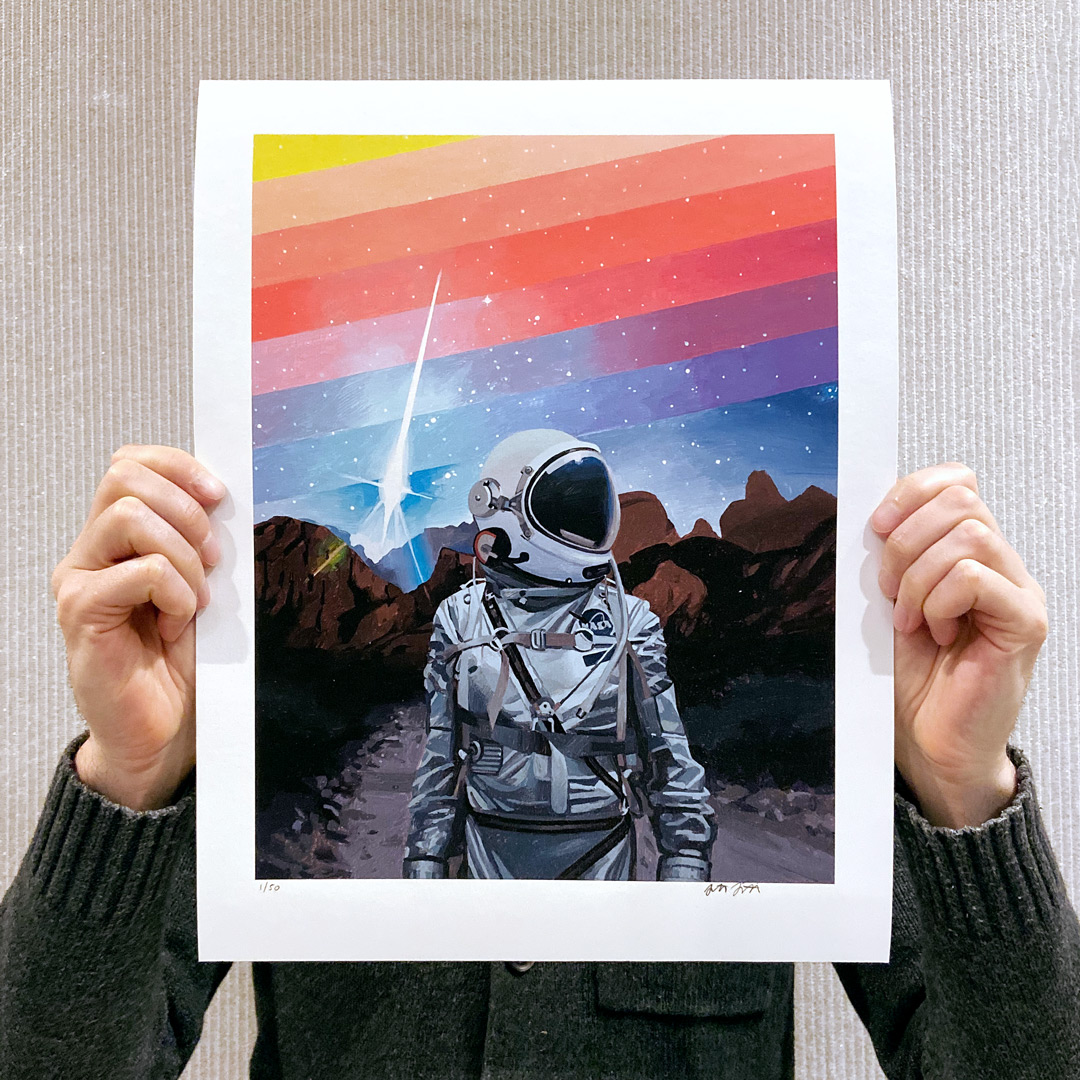 Rainbow I by Scott Listfield

1x: When were these pieces created and materials were used? How long did each piece take from start to finish?
Listfield: They are both oil on canvas and I made them both earlier this year, in the winter or early Spring of 2019. Oh maybe a week or so.

1x: Tell us how the idea and execution came about for each…
Listfield:  Ha! Not sure this comes across, which is ok, but weirdly enough I was thinking about the color palette from the movie Thor: Ragnarok. It’s one of my favorite movies from the past couple of years and it’s got a wonderful, bright, 70’s psychedelic space vibe going on in some of the set designs and movie posters. I wanted to grab that exuberant rainbow and see how it fit into this starry world I was working on. 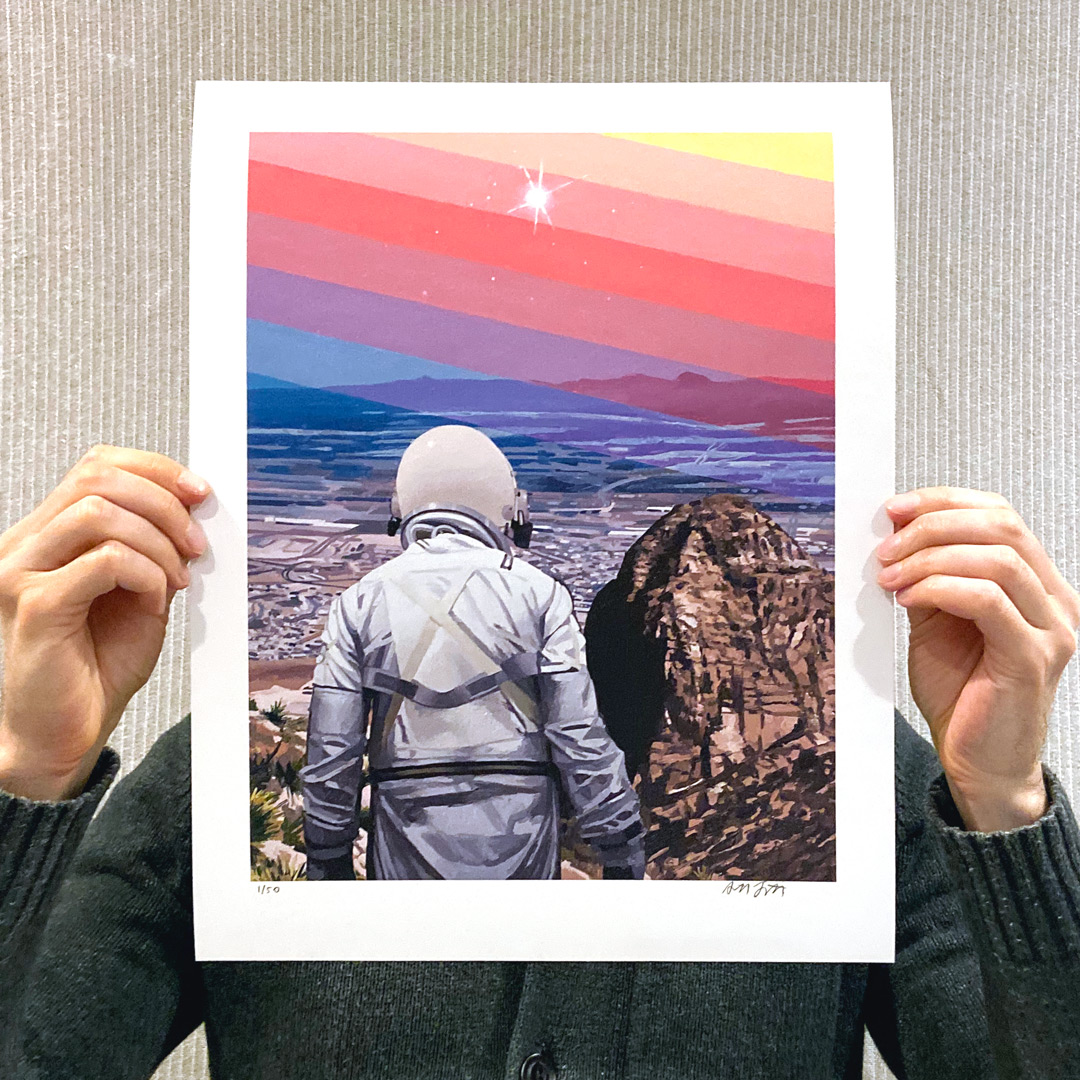 1x: What is unique about these two pieces compared with some of your other work?
Listfield:  Well I don’t paint a lot of rainbows, so there’s that.

1x: Why should people buy one of these prints?
Listfield:  Because they like them, I hope. Or because they’ve mistaken me for a far more successful artist. I’m cool with both of those things.

1x: Describe these two pieces in one gut reaction word.
Listfield:  Well I titled both of them rainbow, so.. Sperm Whale. Wait that’s two words. I’m fucking this up. 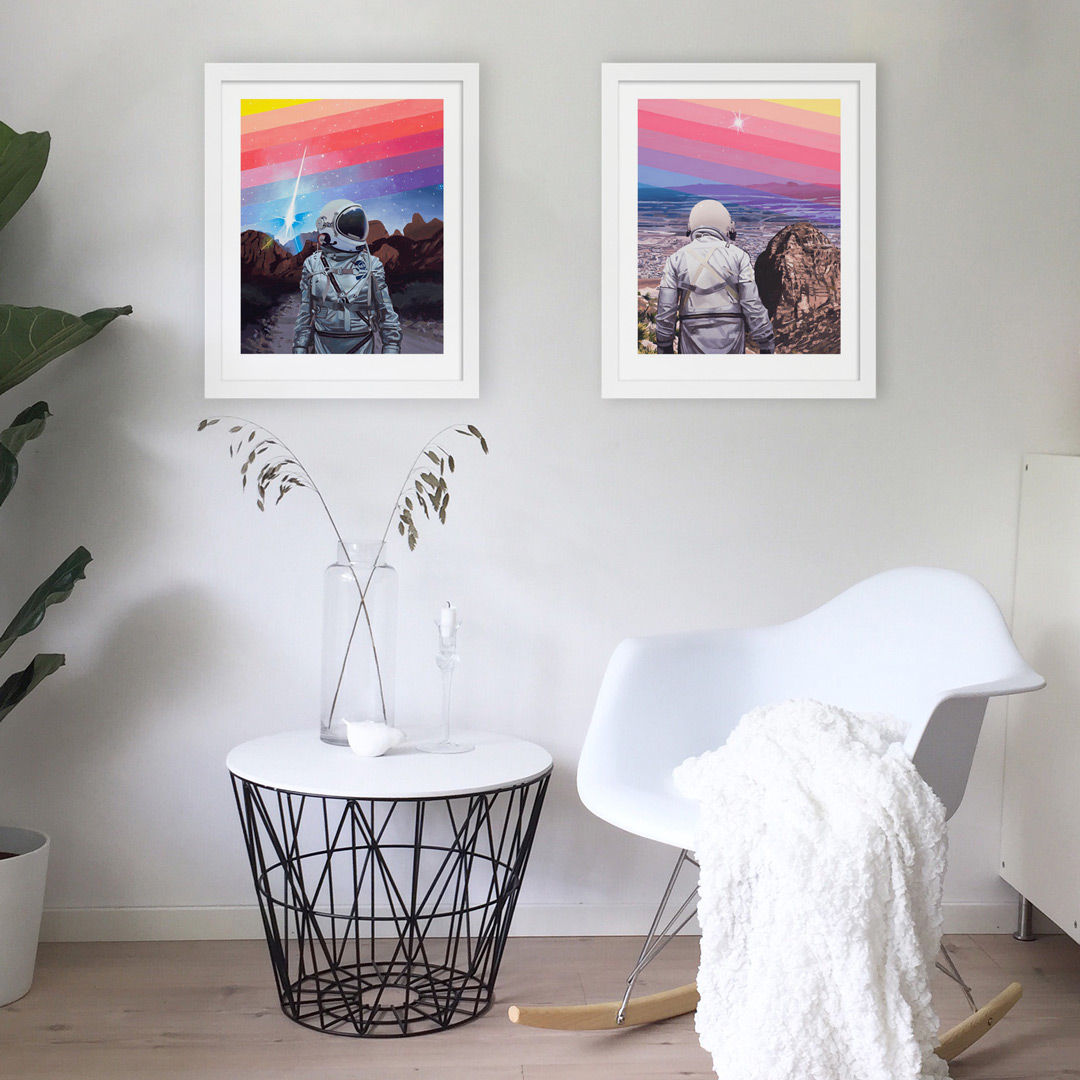 Rainbow I + II by Scott Listfield

1x: You just released your first book, tell us a little bit about what fans can expect from this book…
Listfield: It’s a really great book about my work that I wrote myself and I’m like ok at words things sometimes I guess.

1x: How long did the book take you to put together?
Listfield: God. Much quicker than most books, I think. I already had a catalog of all my paintings labeled and ready to go, up in the cloud, because sometimes (but not always) I’m surprisingly organized. I wrote and edited the whole thing in 2-3 weeks, Shaun Roberts did an amazing job designing the layout, Ken Harman published it and was cool trusting us and letting us just run with it, to the point where I question his sanity. And Andrew Hosner and Danielle Krysa wrote amazing and flattering intros on extremely short notice. I guess it helps that this book is literally a summary of my life’s work and it’s a subject I’m pretty familiar with. It turns out I was extremely ready to put out a book on my work, I just didn’t know it until it happened. 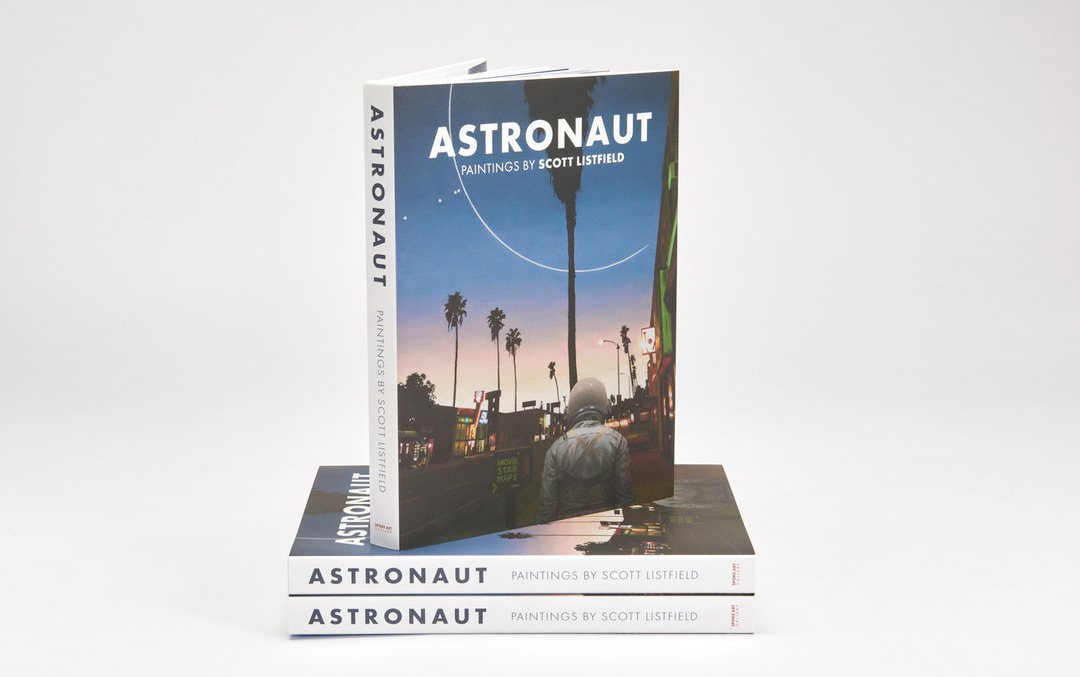 1x: What are some of your favorite things about the book?
Listfield: I mean, just having a book on my work is amazing in and of itself. It’s still shocking to me that there is a literal physical book which includes everything I’ve done over the last 20 years. But my favorite part is that I got to tell my story myself. I got to write exactly what I wanted to about my paintings, talk about where I came from, why I’ve spent a truly ridiculous portion of my life painting astronauts. I could include anecdotes like the time I met He-Man when I was like 8 or 9 and nobody was like “this is a terrible idea, Scott.” I mean, who gets to author the own story of their life? It’s a rare privilege.

1x: What strides do you feel you’ve been making in your work recently?
Listfield:  I think I’ve come a long way as a story teller. More specifically, I’ve been lucky to have had a number of solo shows of my work over the last few years, many more than I had earlier in my career (which I guess is how careers tend to work if they’re going all right). I’ve started thinking about them as discrete chapters in the story of my astronaut, with each having a fairly self contained theme. I’m always nervous at the beginning of each of these series – will people get what I’m saying? Does the theme make sense? Is it interesting enough to keep me motivated for 10 or 20 paintings? Can I balance some fairly weighty themes with some occasionally juvenile humor? Will people like this new batch of work as much as my last batch? Will they sell? God I hope they sell. I mean, they’re not all home runs, of course, some of my work resonates more than others, which will always be the case. But people do seem to get what I’m saying, even when I sometimes get kind of weird. I mean, in the last couple of years I’ve made paintings with a talking pizza delivery robot, a retro futuristic dystopia starring Phil Collins, a Walrus in Hollywood, and a bitchin’ van painted with dolphins and lost in the desert. The fact that people are still along for the ride is kind of amazing to me sometimes. 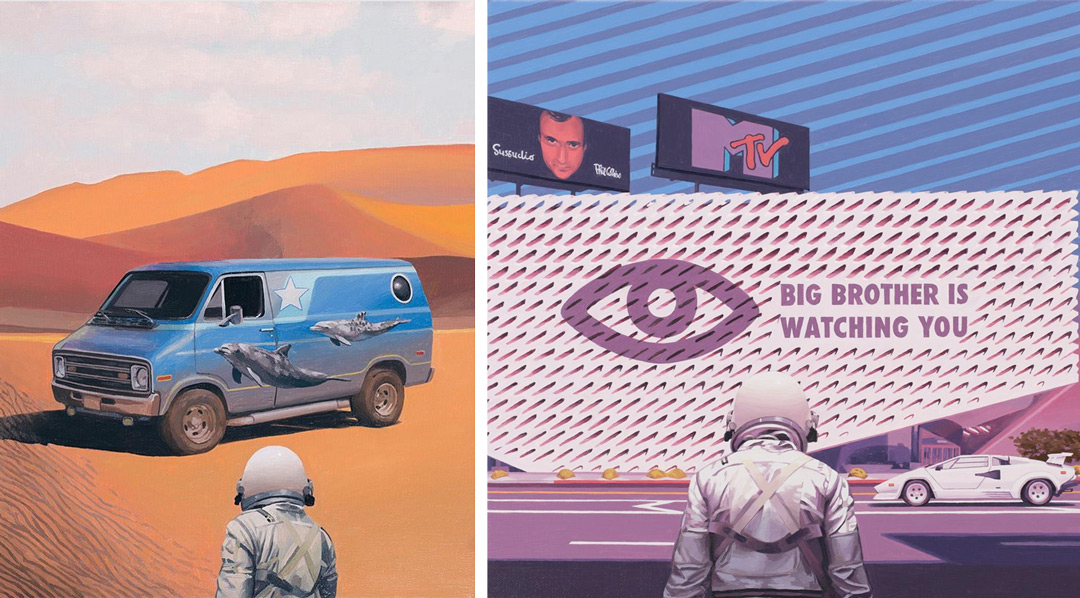 1x: What obstacles do you feel you’ve been dealing with as far as creating new work?
Listfield: Oh you know, the usual things. I think I manage to steer clear of artistic burnout a bit easier than most, in part because while there is an astronaut in each and every painting I make, I can literally send the astronaut anywhere I want, and so there is something of an unlimited source of potential inspiration. That said, I’ve made a lot of astronaut paintings and every once in a while it feels like all the ideas I have are retreads of things I’ve already done. That’s usually a sign I’m being too impatient, too lazy, or that I’m putting too much pressure on myself to make every painting a masterpiece. During times like that I try to refocus on the things I enjoy most about the painting process, and not worry about the things that are, or will be, a bit of a drag.

1x: Are there any artists (new or old/visual or otherwise) that have been inspiring you as of late?
Listfield:  Oh there’s always so many. I can’t possibly name them all, so apologies to the very many that I won’t name here. I’m always inspired by Josie Morway, who’s a good friend of mine. I love the work of Andrew Hem and Yoskay Yamamoto. Lauren YS does soooo many things and they are all awesome. Matthew Grablesky has a studio down the street from me and is just ridiculously good at painting. Josh Keyes and Jean-Pierre Roy are longtime favs. Lucy Sparrow’s Sparrow Mart is the most enjoyable art experience I’ve had to in the last few years. More recently, I’m starting on a series that will dive pretty deep into the American landscape, and so I’ve been looking at Mark Maggiori a lot lately, and also taking some inspiration from  some much earlier American painters like the Hudson River School and the landscapes of Edward Hopper.

1x: What is your schedule like these next few months?
Listfield:  I’ve got a solo show coming up at Thinkspace Projects in Los Angeles in May that I’m super excited for, and will be plugging away at for the foreseeable future.

1x: What are some of your goals as we get into 2020…
Listfield:  Not a personal goal but I’d love to get a new president. 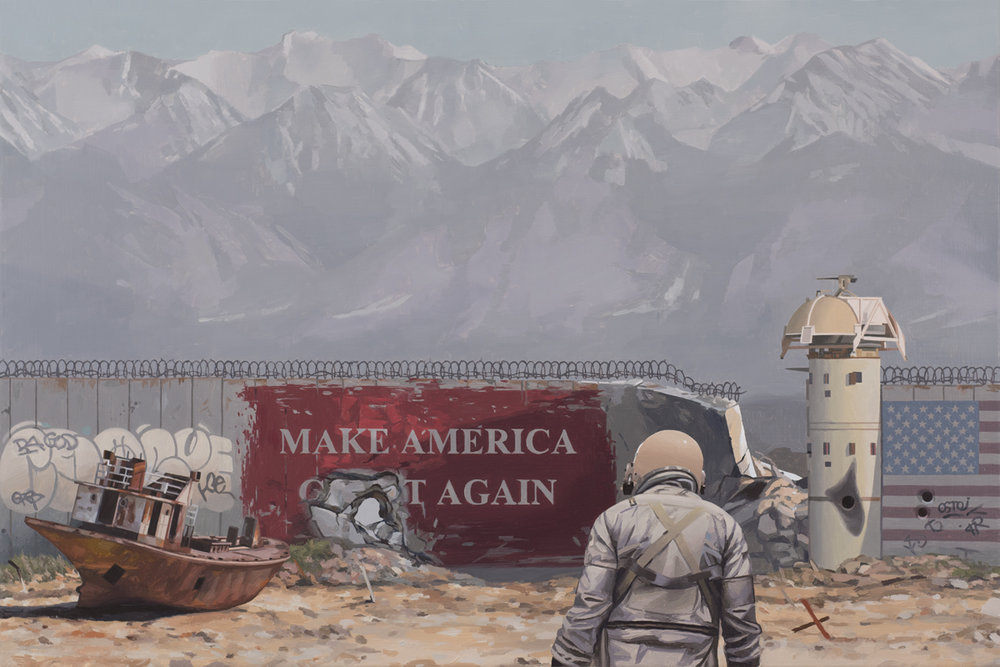 1x: What was the last piece of art that you bought?
Listfield:  I recently bought a print by the always amazing Ken Flewellyn, which I am very excited about.

1x: Anything else that we have left out that you want to touch on?
Listfield:  I just wrapped up my first solo show in Australia at Beinart Gallery in Melbourne. I went down there and had an awesome time, and there’s still a couple paintings available, if anyone is interested.