Last month on April 25th marked an anniversary that many Flint, Michigan residents would rather forget. Three years ago the city of Flint switched the city’s water supply from the Great Lakes Water Authority to the highly corrosive Flint River. Over the ensuing three years, Flint residents would stage protests and aim to expose politicians responsible for the disastrous switch over. Along with the help of protests from Flint residents and the work of veteran news reporters like the Michigan ACLU’s Curt Guyette the Flint Water crisis was brought into the national spotlight. Three years have passed and not much has changed, find out more about the Flint Water Crisis on the Michigan ACLU and on Detroit Metro Times.

For second release in the 1xRUN Flint Water Crisis Print Suite we are excited to welcome in Shepard Fairey who brings us the Flint Eye Alert Globe. Watch the Michigan ACLU’s comprehensive documentary below to find out more behind the Flint Water Crisis, and read on below to find out more behind Shepard Fairey’s print to help us continue this ongoing series. To donate directly head to the Michigan ACLU here and The Flint Child Health & Development Fund of the Foundation of Flint. Stay tuned as we will be announcing new prints from some of the contemporary art world’s biggest names, both locally and internationally, in the coming months with more artists joining Robbie Conal, Shepard Fairey, Doze Green and Maya Hayuk as part of this ongoing series…

1xRUN: Tell us a little bit about this piece, anything immediate you would like us to highlight about this imagery?
Shepard Fairey: The piece is based on a painting I did for my “Earth Crisis” show in Paris. The entire body of work for that show used these shades of blue/turquoise as a connection to the air and water that is essential to sustaining life on planet Earth. This piece is more specifically about the idea that we need to see what is right in front of us, that we are dependent on nature and I used the blooming flower as a symbol of both beauty and growth. If we keep ruining the air and water, things won’t grow, not to mention we’ll all get sick.

1x: When was this piece originally created and what materials were used?
Fairey: This piece was created in 2016, “Earth Crisis” was in June 2016 in Paris at Galerie Itinerrance.  It was created with a combination of stenciling, collage, and screen printing.

1x: What is unique about this piece compared with your other work?
Fairey:  The body of work that this piece is from was the first time that I used all blues in a series. Most of my art uses flat color, but I used a spray paint gradient from dark to light, in the background of this piece, which feels like the light fading at the end of the day. My work is fairly consistent and recognizable, and some of the motifs in this piece have been used in my work before, but this is a unique evolution of those aesthetics for me.

1x: Why should people buy this one of these prints?
Fairey: They should definitely buy it if they like the way it looks, which is what I say about all art. People shouldn’t buy art based on the artist as a brand, or whether they think it’s a good investment, they should just buy it based on how it looks. However, in this case, buying it also supports an important charity, so that’s the second reason. 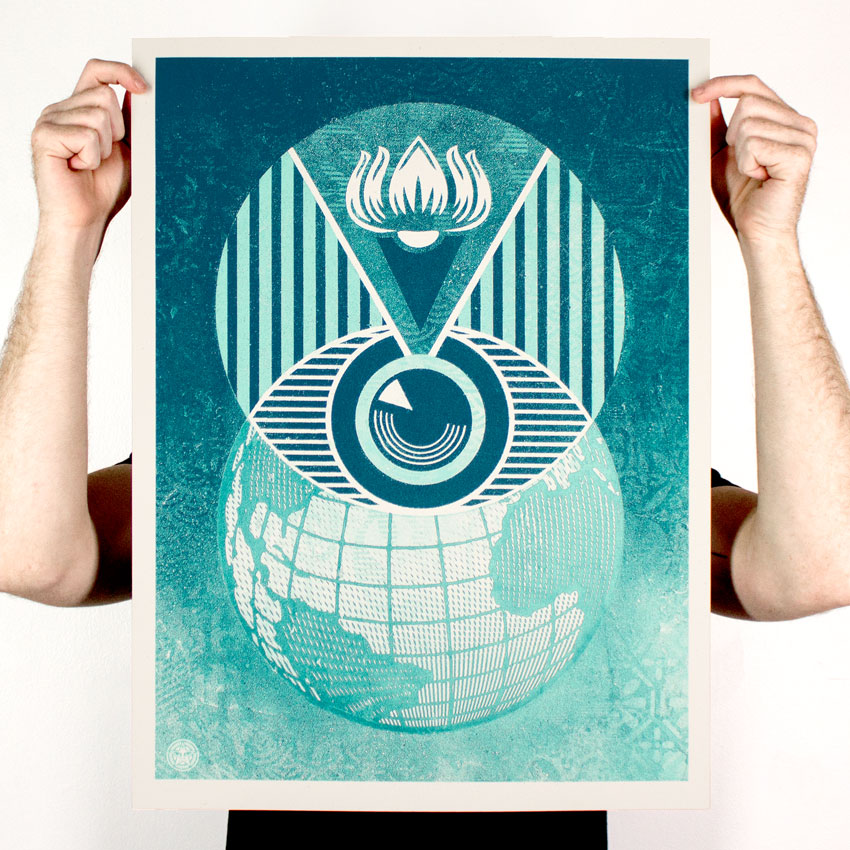 1x: Over the past few years you’ve spent some time here in Michigan, when did you first hear about what had happened up in Flint and what was your initial response?
Fairey:  I don’t remember the exact date that I heard, but I watch the news every day so I heard about it as early as the rest of the public. My response was to think this is what happens when the government, and usually Republicans, put saving money and/or business interests ahead of the interests of the people. Organizations like the EPA exist to prevent stuff like this from happening. I also think that this is related to why we need campaign finance reform, to make sure the interests of the people are put before the interests of wealthy donors and corporations. 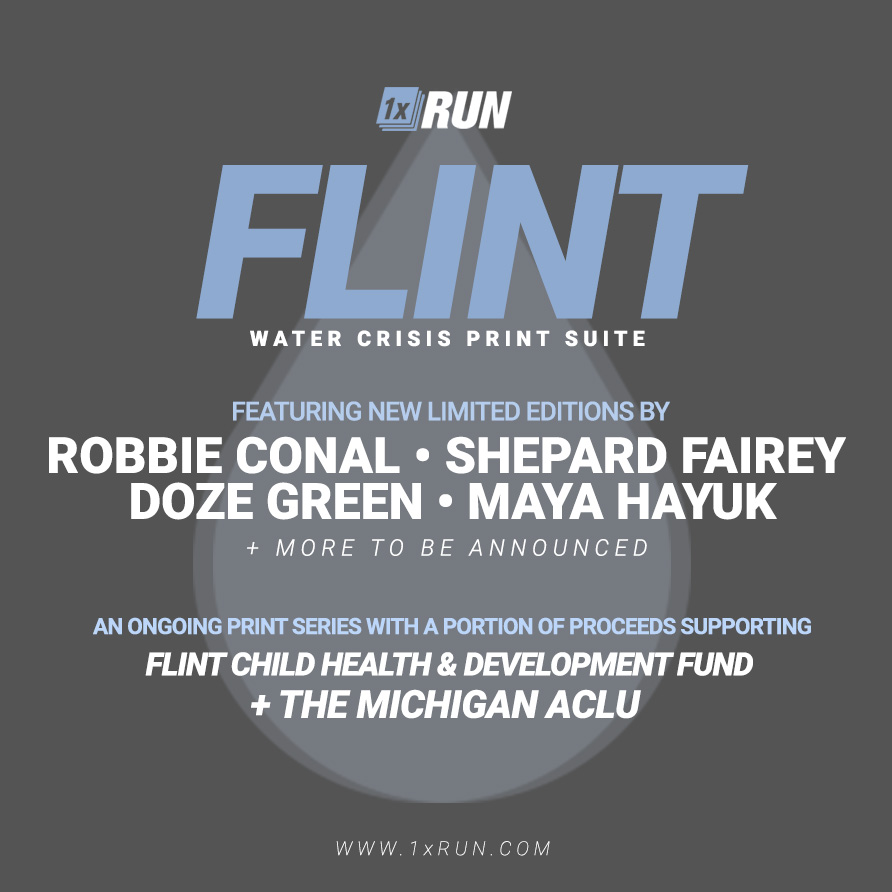 1x: We wanted to get you involved in this project because you’ve always helped champion just causes like this. There are a few major events that come to mind, but has that mentality always been a part of your ongoing campaigns? When did you begin to harness your work in the political/social and when did you realize you reach had grown beyond your work alone?
Fairey:  Back in the 90’s I did some work for The Sierra Club, Arctic National Wildlife Refuge, and the Paper Campaign to encourage corporations to use more recycled materials as well as to recycle, but it was not until I saw “An Inconvenient Truth” that environmental causes became a big focus of my work. I have addressed social causes and politics in my work for most of my career, but as I’ve gotten older, I feel I’m more confident in voicing my opinion because I have more education and experience. I also have more resources which allow me to be generous, but I’ve been doing charitable things going back to even when I was poor. Charity is a lot easier though when you aren’t living hand to mouth, on the other hand, anyone can educate themselves, speak up, and make better choices as a consumer even with little money. We all have more power than we probably think. One of my most important missions is to encourage people to be less apathetic when it comes to responding to their conscious.

1x: Previously we talked about Robbie Conal — who kicked off the Flint Water Crisis Print Suite — influencing you early on and inspiring you in the Obey campaign. In addition to Robbie, who are some of other artists (and their given approaches) that you admire as far as using their platform to get the word out to a wide audience and generate attention for a specific cause?
Fairey:  Banksy is really great at communicating on issues and supporting things like Amnesty International. My friend Ravi Zupa from Denver recently did a great series of images supporting Black Lives Matter. Barbara Kruger has always done work around women’s issues – such are reproductive rights. Swoon does work for a number of groups of vulnerable people. The sad thing is, there should be more.

1x: As we’re settling in the past the first 100 days of the Trump administration, what are some of the most alarming issues that you’ve seen come up? What is troubling you most right now?
Fairey:  There are too many things to name, but Trump’s policies toward the environment and climate change are probably the most disturbing thing for me because the damage we do now might lead us to an irreversible tipping point. I’d like to be part of the generation that is remembered for averting disaster rather than ensuring it.

1x: In our last interview you mentioned that you were sharpening your focus — as far as zeroing in on specific issues with your work and aiming to tackle them issues more head on — how do you feel your latest pieces have been evolving? What things have you been trying to focus on as of late?
Fairey: I’m focusing on issues rather than figures, and the way in which subjects appear in my work are more as archetypes that are vehicles for a narrative, rather than specific individuals. My recent work is focused on raising awareness around the following issues – xenophobia, wage inequality between sexes, the fractured nature of our media and the wealth of disinformation.

1x: What was the last piece of art that you bought?
Fairey: I just did a trade with Cleon Peterson for a painting of his “Trump 2017” image which is inspired by the figurative work on Greco-Roman pottery. His image illustrates the clear and brutal hierarchy from the king at the top, to the business people, to the soldiers, on down to the peasants fighting in the streets. I think Cleon’s work is very powerful and elegant, even though it can be unsettling. 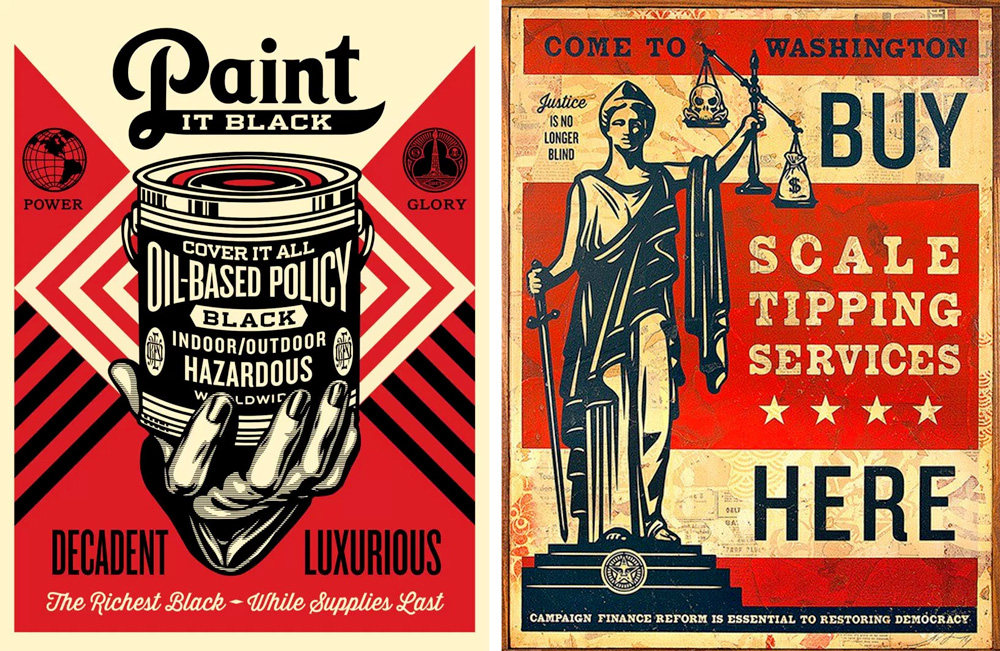 1x: Any big shows or events coming up that you’d like to share?
Fairey: I’ll be going to Sydney in June for a talk and a show. I also have a large solo show here in Los Angeles this fall called “Damaged” that I’m working on. I’m sure there’s more that will pop up about that and some other projects that are in the works.

Donate To The Michigan ACLU here + Donate To The Flint Child Health & Development Fund of the Foundation of Flint here.
-1xRUN
Shepard Fairey was interviewed via email by 1xRUN Editor-In-Chief Pietro Truba.  He has previously interviewed Niagara, Leni & John Sinclair, Ricky Powell, Doze Green, Fred Armisen, and Janette Beckman among others for 1xRUN. Follow him @pietrotruba.
0010
BY: Dan Armand