We welcome in prolific hip-hop photographer Jonathan Mannion, who joins us for his debut run 4 Shizzle featuring an iconic photo snapped of Snoop Dogg. While working for The Source back in the late nineties, Mannion waited for 5 hours outside No Limit Records as Snoop worked on his first album for the label after leaving Death Row Records. Be sure to snag up one of three variant editions, each hand-pulled by 1xRUN in Detroit before they’re gone, and read on as Mannion gives us the story behind this iconic photograph snapped down in Louisiana, his beginnings in photography and much more . . . 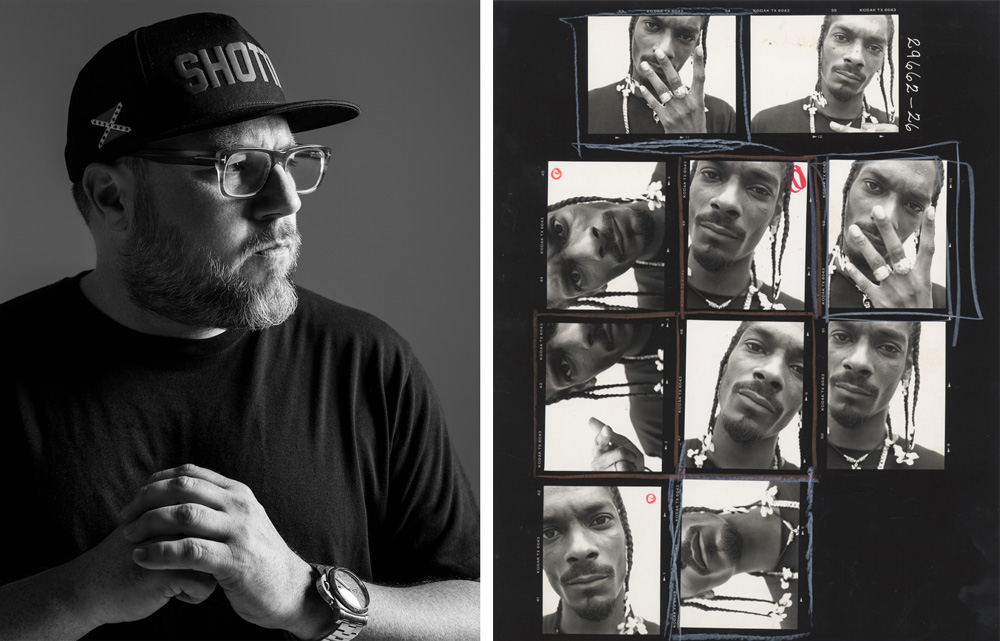 1xRUN: Tell us a little bit about this photo, anything immediate you would like us to highlight about this image?
Jonathan Mannion: On this humid day in Baton Rouge, Louisiana, I was assigned the task of photographing the legendary Snoop Dogg for a feature story in The Source Magazine. It was imperative that I came back with an 8 page story, MINIMUM. This was a different moment in time for Snoop because he had just signed to Master P’s label, NO LIMIT Records. This was uncharted territory for this West Coast legend. We waited for him outside of the No Limit offices in the parking lot for about 5 hours. 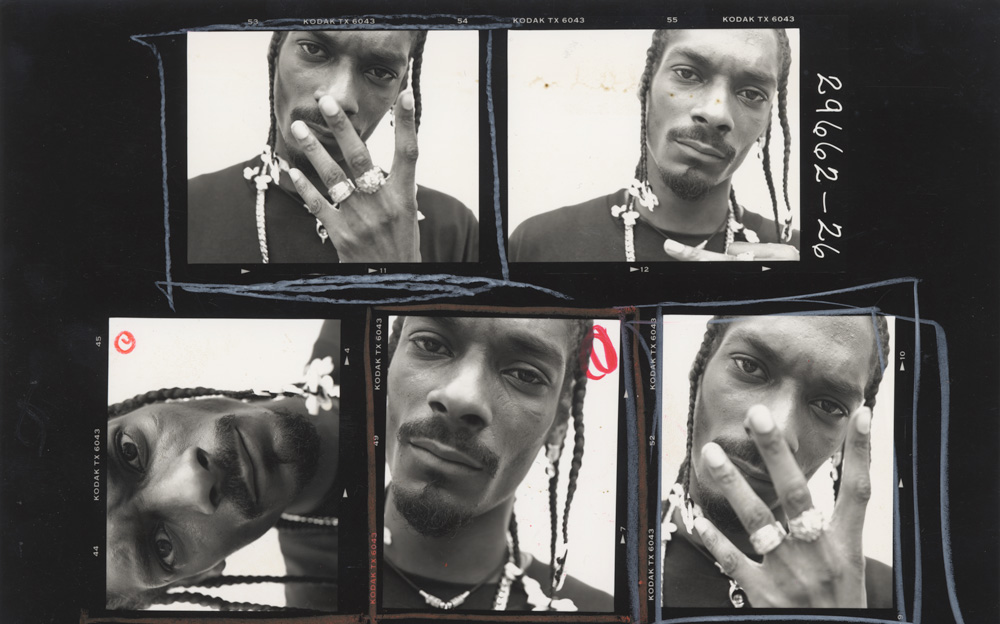 During that time, I was just doing portraits of people hanging around & coming in and out of the label. This was my way of staying connected to the moment. Finally, Snoop showed up and we greeted each other. He said “I have to run inside and pick something up and then I have to dash to the airport to pick up my family, so maybe we could do the shoot later.” As a photographer in Hip Hop for only about 3 years, I still knew that meant “As soon as I get what I need (this check from the label), I’m out, not interested in this photo shoot.” I knew that I had to rope him in quickly as we were set up for 6 hours at this point. I said, “Snoop, I met you one time with The D.O.C. and Warren G, how are they doing? Please send them my best… I have to say, The D.O.C. is the reason why I’m shooting today.” It put him in the mindset that 1. I had met him before and 2. I knew his peers and 3. I was there from “his” beginning in 1988 or so. I said, “Before you dash to the airport, please give me 20 minutes, of your time, I’m all set up (8×10 Deardorff set up, 1 assistant ready, 6 Pentax 6x7s locked and loaded, 195 Land Camera with 665 in it”… we were SET). He said “I’ll be back.” I responded “You won’t have to come back if you give me 15 minutes.” He said… “6 Minutes”… I said “14”… He said “10”… I said “12, final offer.” I knew I had him. We shook on it… And, I said “Start the clock!” 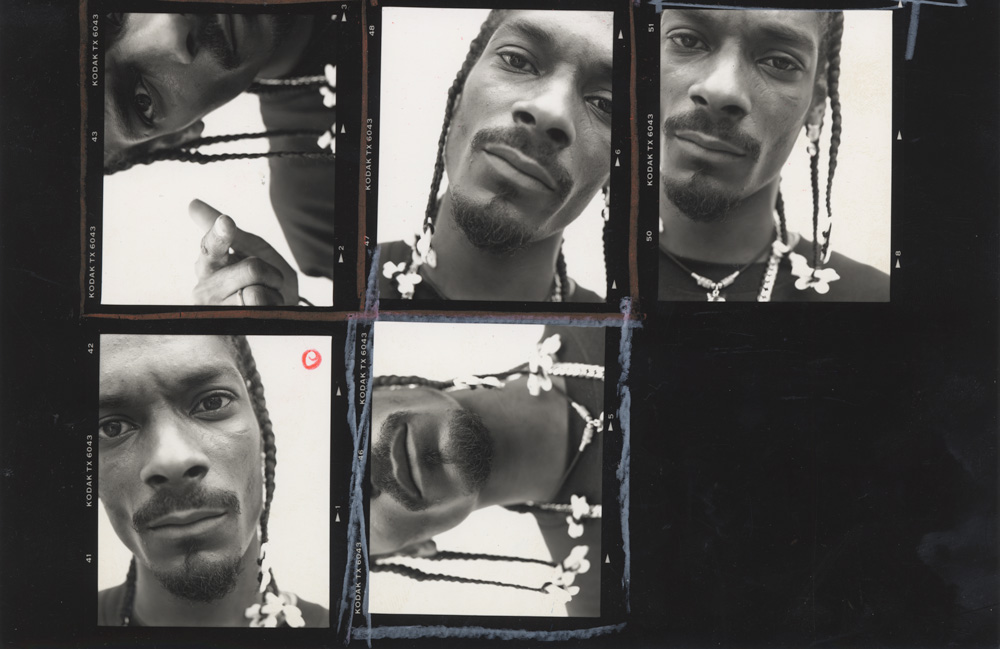 1x: Was this image part of a theme, series, or show that you had at the time?
Mannion: This image hasn’t really been seen beyond the original article in The Source in 1998.

1x: What camera and film were used to create this original photo?
Mannion: This particular frame was from the Pentax 6×7 and was shot on TX 400. 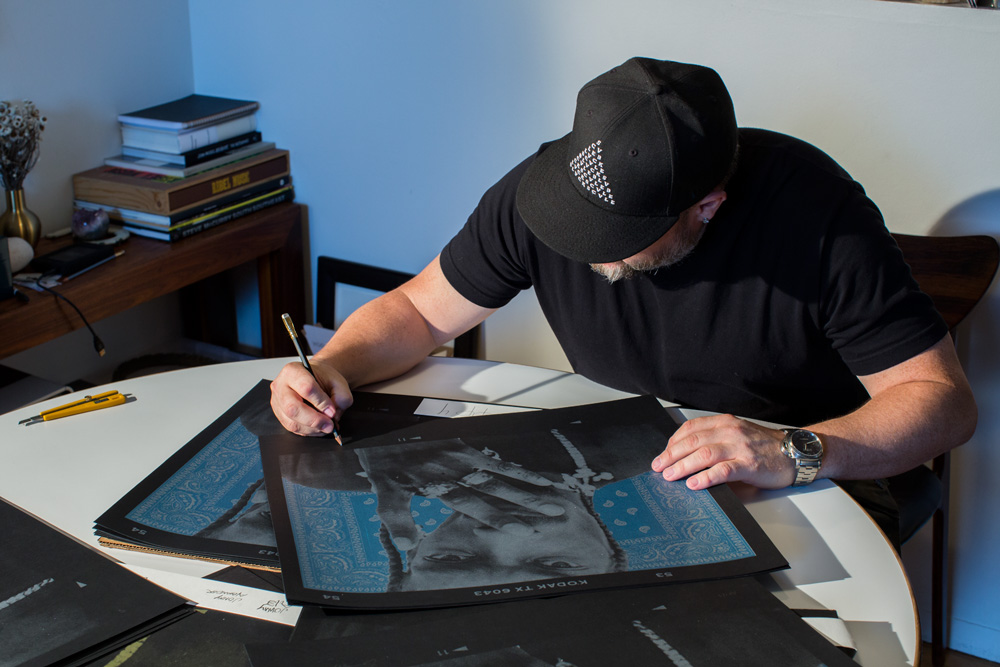 1x: Why was this image chosen?
Mannion: This image represented his relentless focus and the ability to rise to the occasion with intensity in the moment. In 12 minutes, he commanded the frame and we created timeless work. Nearly 20 years later, this images still holds court.

1x: What is unique about this piece compared with your other work?
Mannion: This piece, as I look back, represents my process and approach to photography. Without my focus in the moment that kept him there for an extra 12 minutes, without my quick thinking about what to say to him to hold his attention, without my skill set and knowledge of craft, without a brilliant assistant with me that was down to deliver the film as fast as he did… this shot, quite simply, WOULD NOT EXIST. 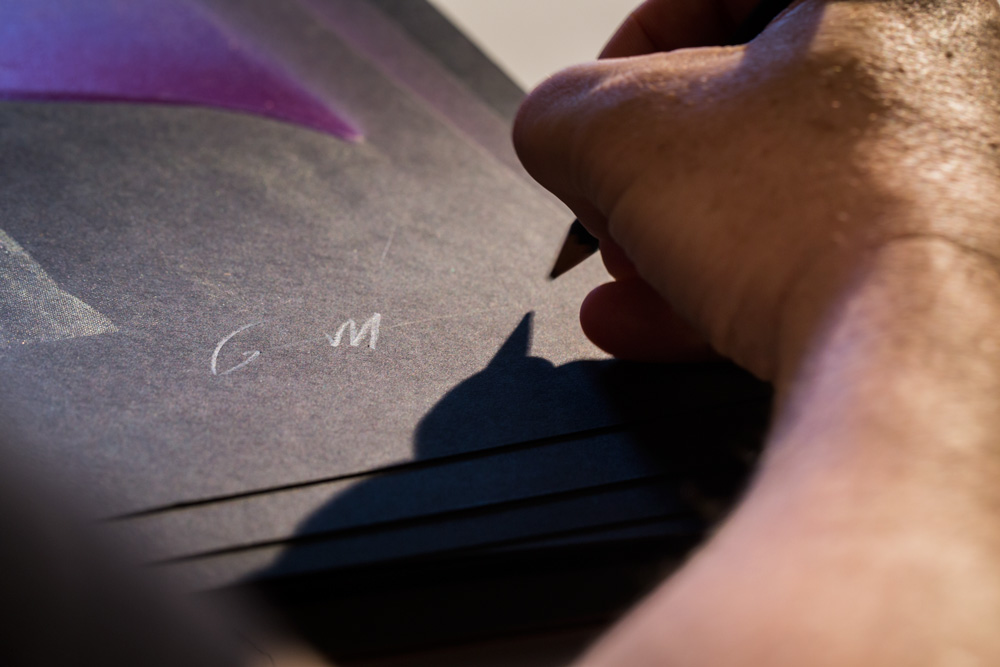 1x: Why should people buy this print?
Mannion:To be honest, the masses might not be able to buy ANY of these prints as I might buy the whole edition! But seriously, this print is a gift to the world to inspire people to collect fine art. 1xRUN and I couldn’t have made this easier for everyone to purchase a quality silkscreen. The execution of the print is beautiful, the image is legendary and the price point is unparalleled. I would suggest that everyone move quickly.

1x: When did you first start taking photos?
Mannion:My love for photography began when I was at Kenyon College in 1992-93. I found it to be a perfect blend of my degrees; Psychology and Studio Art. It just came naturally to me. I’ve worked professionally in photography since my move to NYC in 1993 where I accepted a position with the incomparable Richard Avedon. In 1996, I achieved my first album cover, “Reasonable Doubt” for a young Jay Z. I moved relentlessly forward from that point creating iconic images for Hip-Hop’s greatest artists. 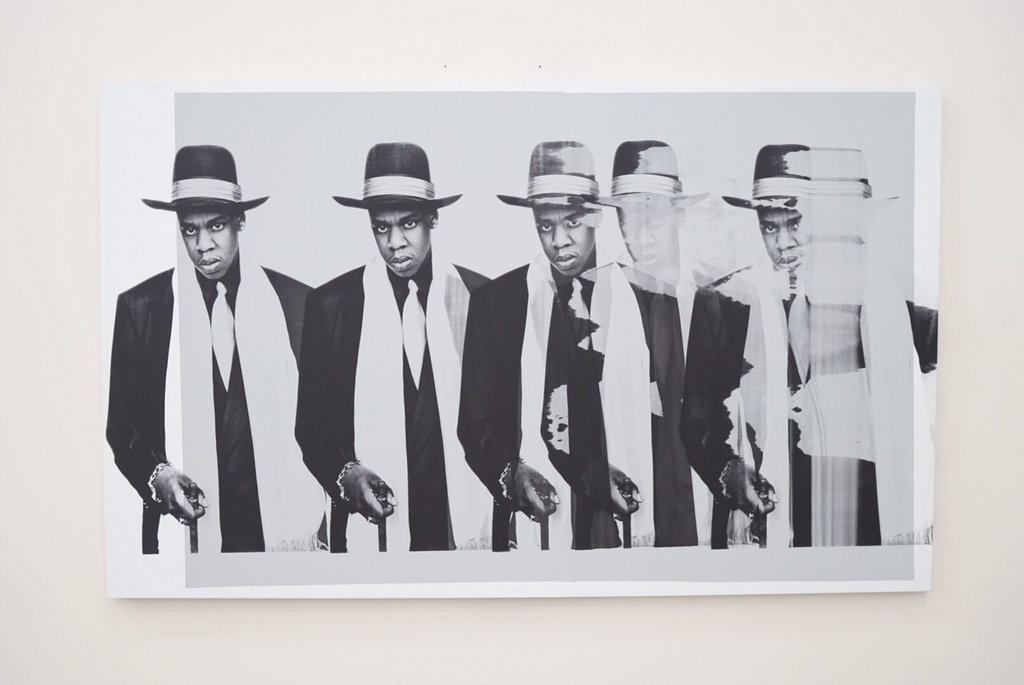 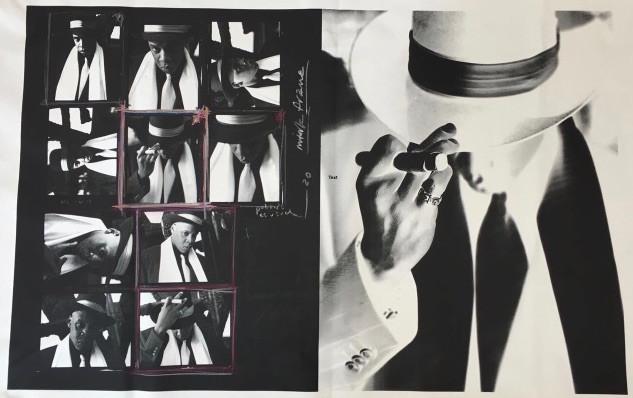 1x: What was your first photo where you realized you had created something special?
Mannion: It was my first roll of film that I developed in 1992 at Kenyon College. I photographed the star basketball player, Che Smith, throwing down dunks as I sat on an unstable backboard bracing myself as that outdoor hoop rocked like crazy. I processed the roll, saw the contact, and said to myself “what a way to have a conversation with someone and to mark a moment that would never be the same again.”

1x: What artists inspired you early on?
Mannion:My mother and father are painters, so it all stems from them. They taught me how to truly SEE. Composition, color theory, creating depth, etc. was all them. Avedon, Steven Klein, Michael Halsband, and Ben Watts all had a major impact on me. I assisted each of them during the period of 1993-1996 before taking the leap to shoot my own work.

1x: What artists inspire you now?
Mannion: I’m inspired by the masters: Avedon, Penn, Cartier Bresson, Diosneau, Salgado, Danny Lyons. I’m moved by true talent in any discipline of the arts. Beyond photography, painters like José Parla, Retna, Charming Baker all hit a chord with me. And, if you’re talking musicians… I’m loving what Kendrick is doing at the moment.

1x: Do you listen to music while you work? If so, what? If not then what is your environment like when you work?
Mannion: I’m a huge reggae, dancehall, soca, Afro beat fan. Loving the stuff coming out of Nigeria at the moment; Burna Boy, Mr.Eazi, etc.

1x: If you could collaborate with any living artist who would it be and why? Any deceased artists?
Mannion: I’m looking forward to sessions with Depeche Mode, Sade, and Chance the Rapper. [For the latter] it’s all about Bob Marley. There was something truly transcendent about his message. He was so clear about his motivation, his value, and his gift. He and I would have got along beautifully.

1x: What was the first piece of art that you bought? Do you still have it? The last?
Mannion:The first piece of art that I bought was a Peter Beard print from Africa of an elephant. It has all of his typical smear markings on it and was framed in rugged wood. It’s a real gem. I didn’t want anything too large at that time as I didn’t really have a ton of space. This was a perfect one. I still have it for sure. I’m a big collector of photography and art. The last piece of art that I bought was a 30×40 picture of Shabba Ranks from his “X-tra Naked” album. It was actually the cover. Shot by one of my mentors, Michael Halsband, on an 8×10 large format camera, it’s the centerpiece of my house at the moment. 1x: Any big shows or events coming up that you’d like to share?
Mannion: I’m working on something MAJOR at the moment that will put all of the work that I’ve done over the last 20 years back in your hands. Stay tuned!